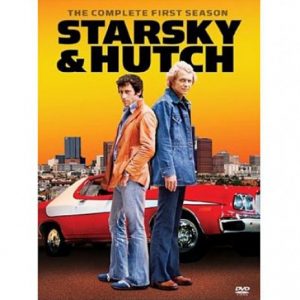 When I was 13, the first poster that I ever bought with my meager savings was that of the 1974 Ford Gran Torino from my favorite TV police detective show “Starsky and Hutch”. 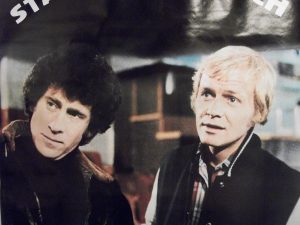 Detectives Dave Starsky and Ken Hutchinson were played by actors Paul Michael Glaser and David Soul, who was also a popular singer then with his hit single “Don’t Give Up On Us”. In the poster I bought, Glaser and Soul posed proudly with the modified Gran Torino cop car, which was code-named “Zebra 3” in their TV police lingo but was referred to by other cops as the “Striped Tomato” because of its Ford Red with Wimbledon White vector stripe paint scheme. 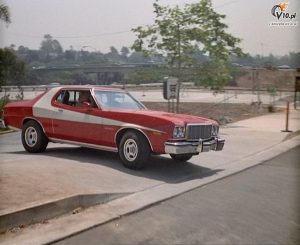 I distinctly remembered one episode where Starsky was revving the engine of the Gran Torino to show-off to his partner Hutch, who drives around in a large, beat-up 4-door American sedan. The sound of the modified 351-cubic-inch Ford Windsor V8 with a mild cam and four-barrel carburetor breathing out through headers and free-flowing Thrust mufflers didn’t seem to impress Hutch but it reverberated repeatedly in my young impressionable head. Every time Starsky mashes the Gran Torino’s gas pedal to chase a bad guy, I would always turn up our TV’s volume to hear the roaring motor and squealing big fat rear tires. 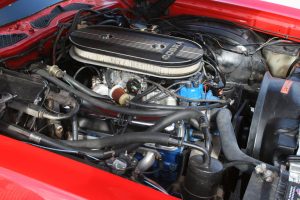 Some episodes showed the black interior, 140-mph police interceptor speedometer, Motorola police radio and magnet-mounted red dome revolving police light while outside and running footage showed the racy American Racing slotted aluminum wheels and the “low in front, high at the back” drag racing stance that was quite popular during the period. From the sound of the motor, I could tell it had an automatic transmission and from the two black tire marks that it leaves on the road, I can tell that it probably had a ford 9-inch limited slip differential. But it was just probably the car-freak 13-year-old whiz kid in me talking. 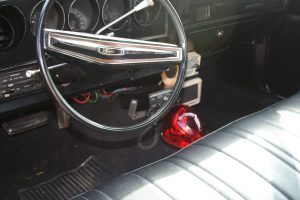 Several years ago, they made a “Starsky and Hutch” movie with Ben Stiller as Starsky and Owen Wilson as Hutch. Of course, the movie police detectives had a 1974 Ford Gran Torino “Zebra 3 / Striped Tomato” cop car but while the vector stripe was correctly done in Ford Wimbledon White, the car was finished in Viper Red, which looks more radiant than the original Ford Red. 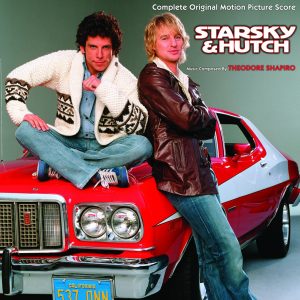 Perhaps, because of the movie screen’s larger format, the brighter red color was needed to make the car look flashier to attract a new generation of “Starsky and Hutch” followers. It was just unfortunate that despite the star power of Stiller and Wilson, the movie script didn’t make the lead characters as cool and as lovable as they were in the ‘70s TV series. 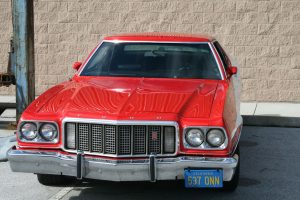 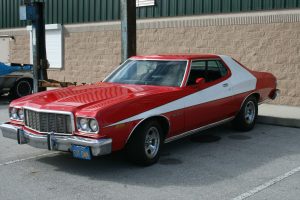 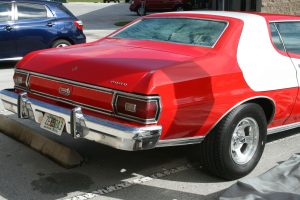 Hopefully, the movie Zebra 3 / Striped Tomato cop car left a lasting impression on the young audience who watched it, thus creating a new generation of gear heads hooked with roaring V8 motors and squealing big fat rear tires. I’d guess that the producers were also hopeful that the movie will generate enough interests in young impressionable kids to part with their meager savings to buy posters (or have screen savers, at least) of a 1974 Ford Gran Torino and two detectives named Starsky and Hutch. 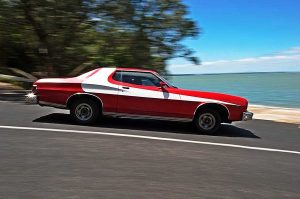