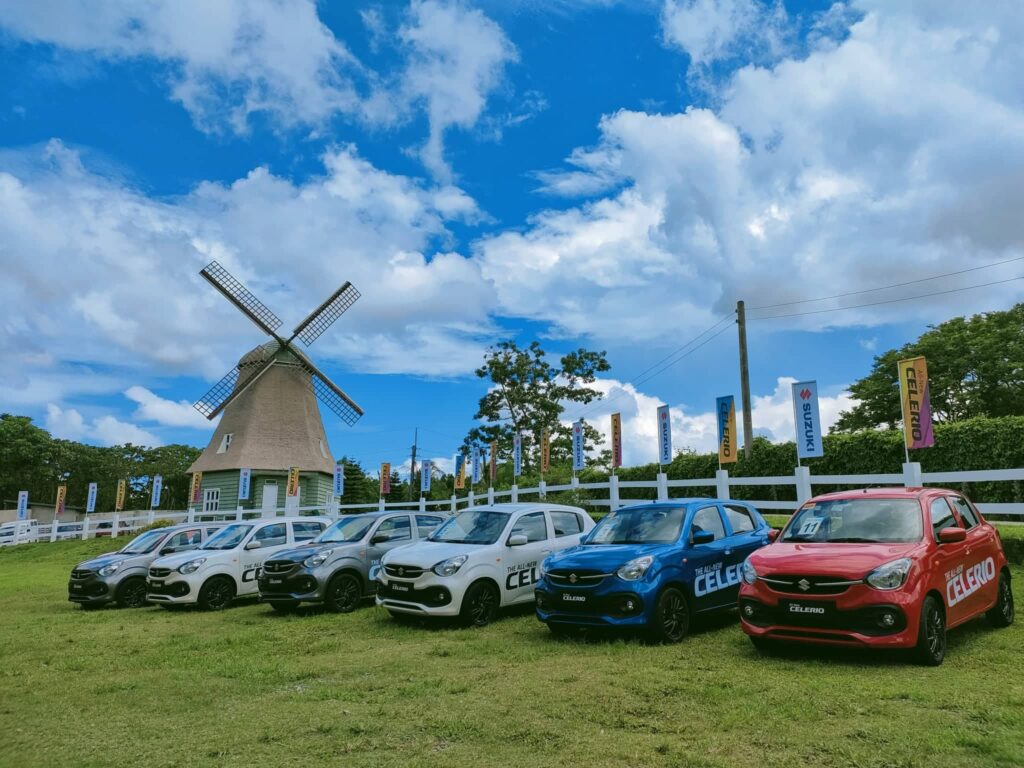 When Suzuki Philippines, Inc. (SPH) launched the latest generation of their subcompact model, their General Manager for Automobile, Norihide Takei, was quoted as saying, “The all-new Suzuki Celerio has evolved into a compact car that will make people’s life easier, more convenient, and will allow to express one’s personality in an age where diversity is expected. We are confident that it will exceed the expectations of customers who seek both practicality and individuality.” To emphasize the dimensional growth of the new Celerio, it was launched with the tagline, “Live Big Every Moment”. 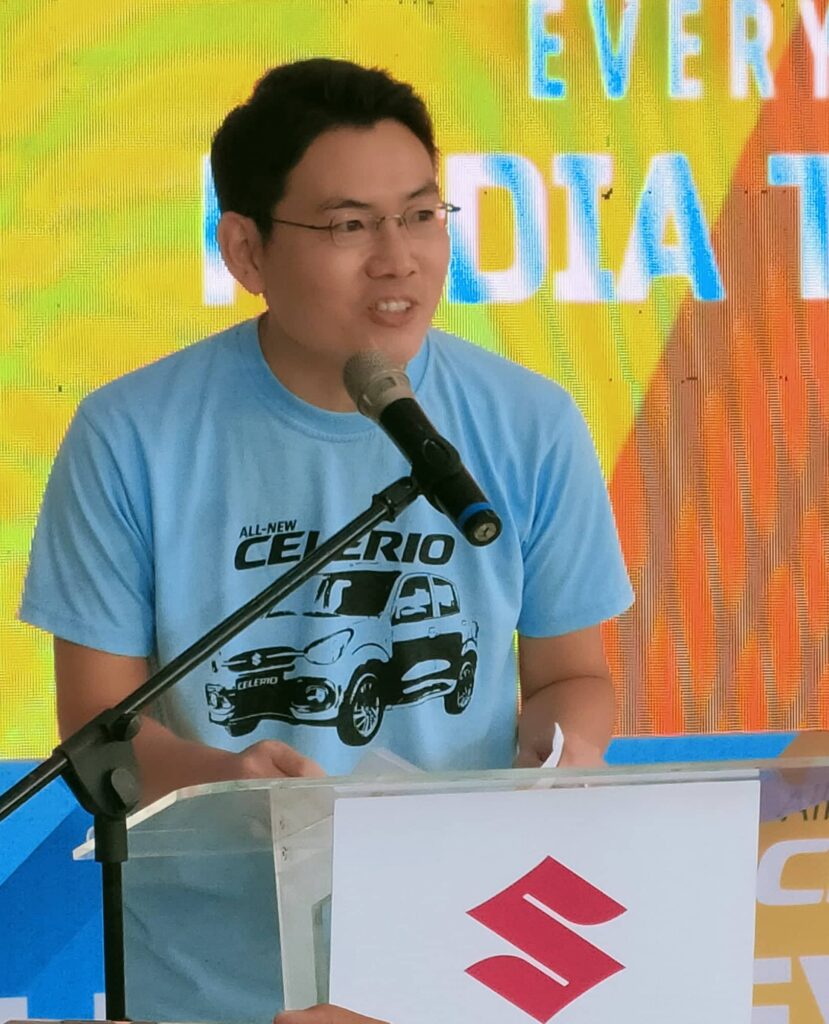 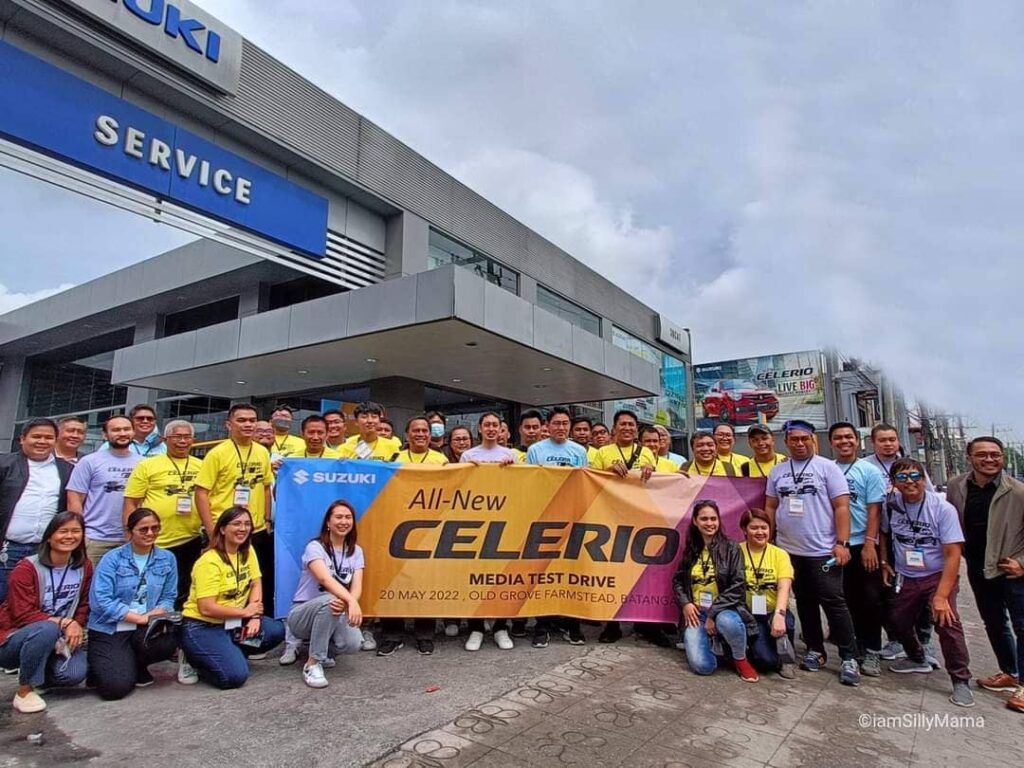 On May 20th, SPH invited several members of the motoring press to “live big every moment” and drive the all-new Celerio from the Suzuki Auto dealership in Sucat, Parañaque to The Old Grove Farmstead, in Lipa, Batangas. I was surprised to be invited to the media drive without my favorite driver (my husband Lester) but I was glad that I was grouped with our good friends, Mike Potenciano and Henri Buen Consejo of MP Turbo Time. We were assigned to Car #10, an Artic White Celerio with the Auto Gear Shift (AGS) automated 5-speed manual transmission. 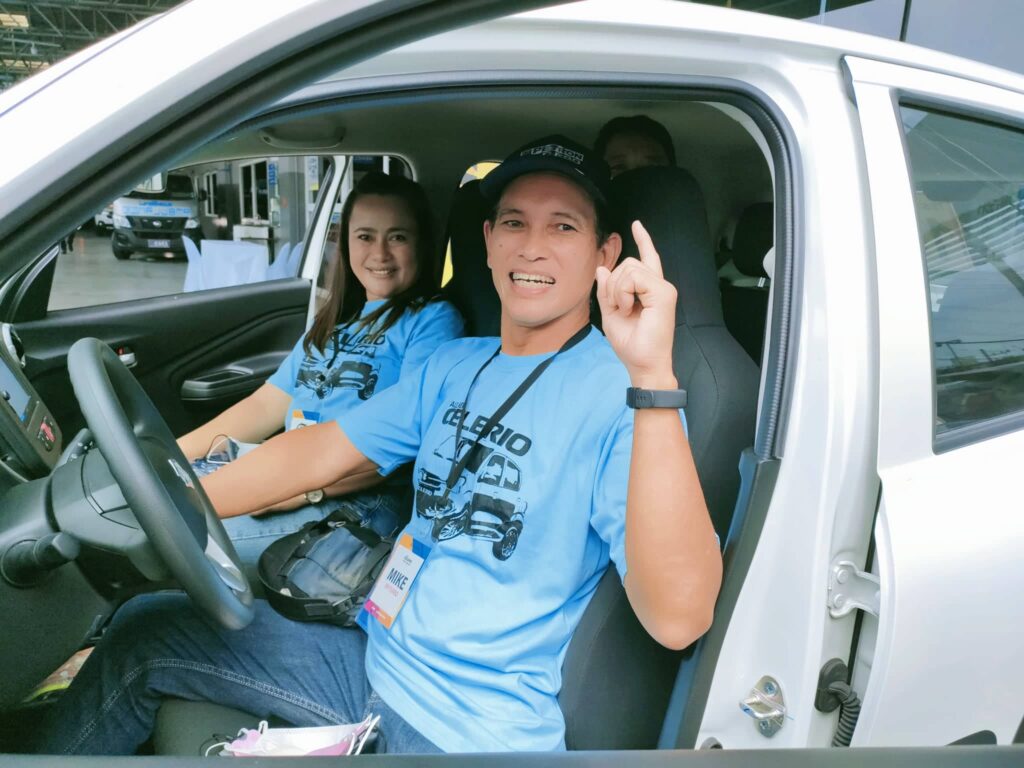 With the skyrocketing fuel prices, SPH wanted to emphasize the fuel economy of the Celerio’s thrifty yet responsive 1.0-liter K10C DualJet engine. Mike, who’s a race car driver and certified car enthusiast, said that the 3-cylinder engine makes 67 horsepower and 89 Newton-meters of torque because of higher compression ratio, reduced friction, and two fuel injectors per cylinder. Our group was one of the favorites to win the fuel economy run because Henri was part of the Automobile Association Philippines (AAP) team that observed the tests where the Celerio obtained a 28.25 kilometers per liter fuel efficiency rating. 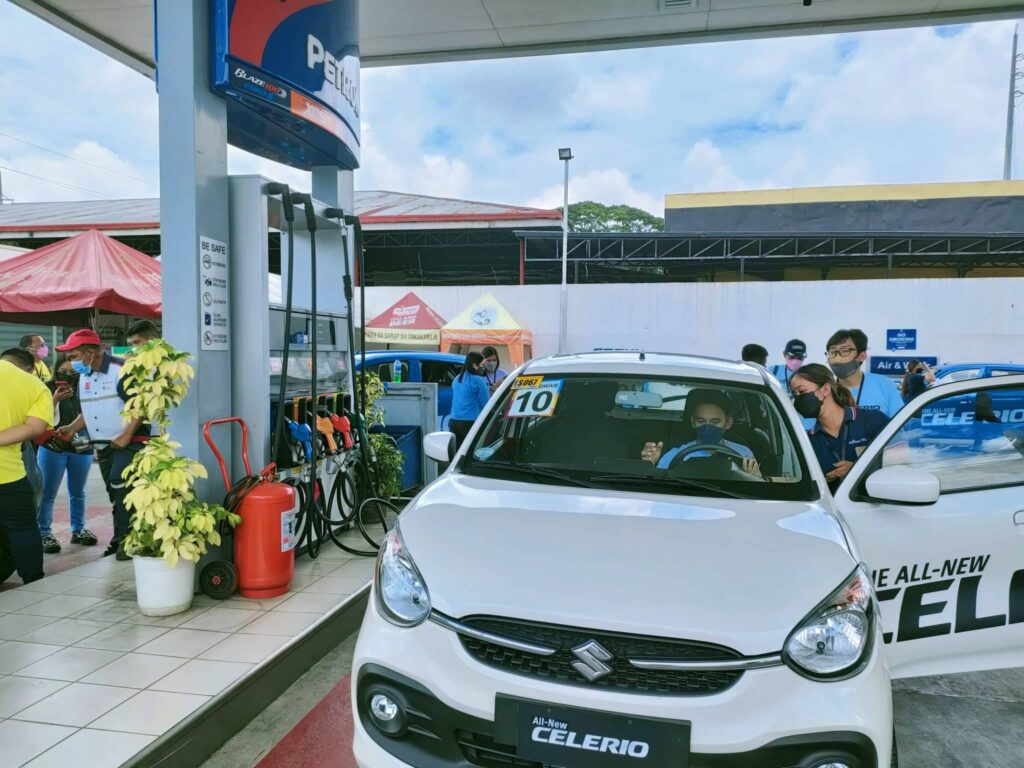 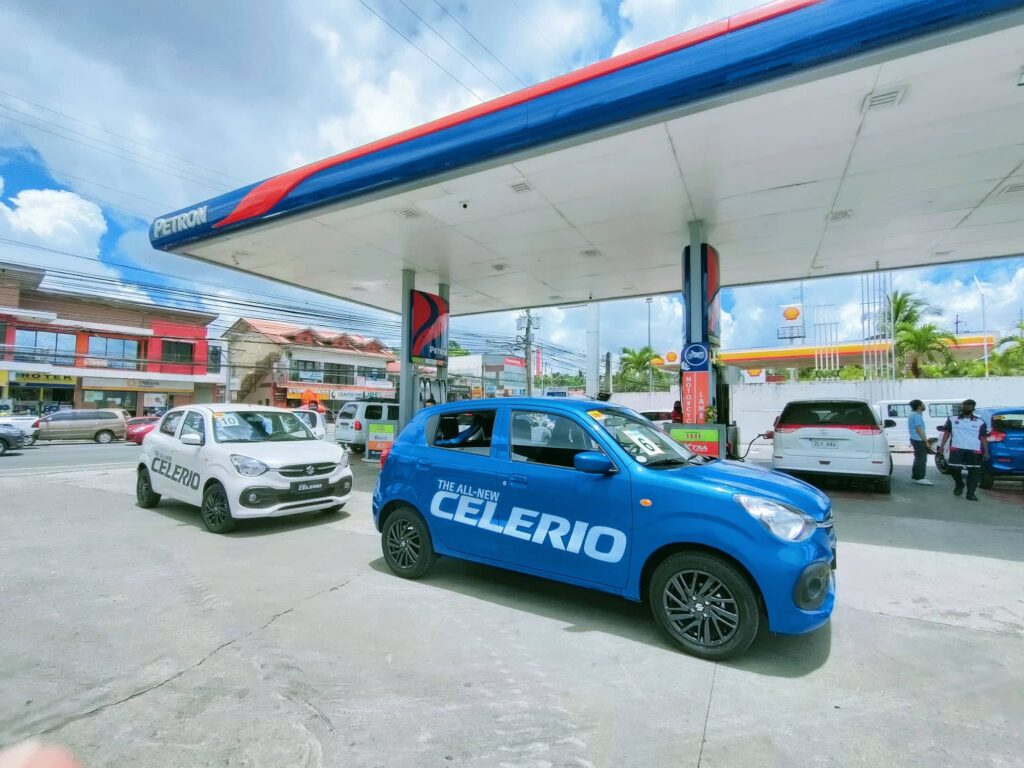 With fuel tanks filled to the brim, our convoy of Celerios left Suzuki Auto Sucat at around 9:00 AM. Mike slowly drove the car towards the South Luzon Expressway (SLEX) with Henri advising him to keep the speeds between 50 and 60 km/h and to let the AGS shift by itself because it was programmed for optimum fuel efficiency. Try as hard as he might, the competitive racer in Mike often came out and Henri had to often remind him to drive a bit slower. Mike drove all the way to the STAR Tollway until we reached Lipa, where our fuel mileage was measured at 25.70 km/L. 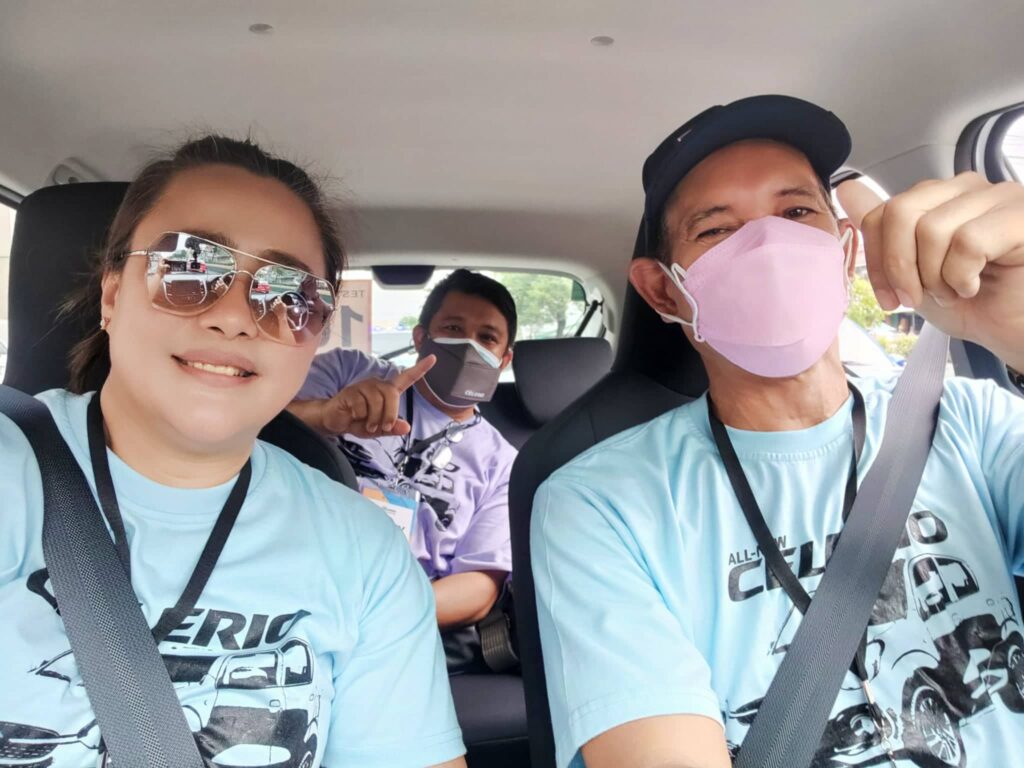 Having Fun at The Old Grove Farmstead

We were excited with our fuel mileage, which was just 2.55 km/L lower than the AAP-observed fuel efficiency for the Celerio. However, Monch Henares of Monchter Chronicles and MotoTurismo did a more efficient run and averaged 26.55 km/L to clinch the win. For achieving the best fuel mileage, Monch’s team each got a brand-new Seiko 5 wrist watch as their price. My hubby would have been green with envy since he’s also a Seiko 5 enthusiast! 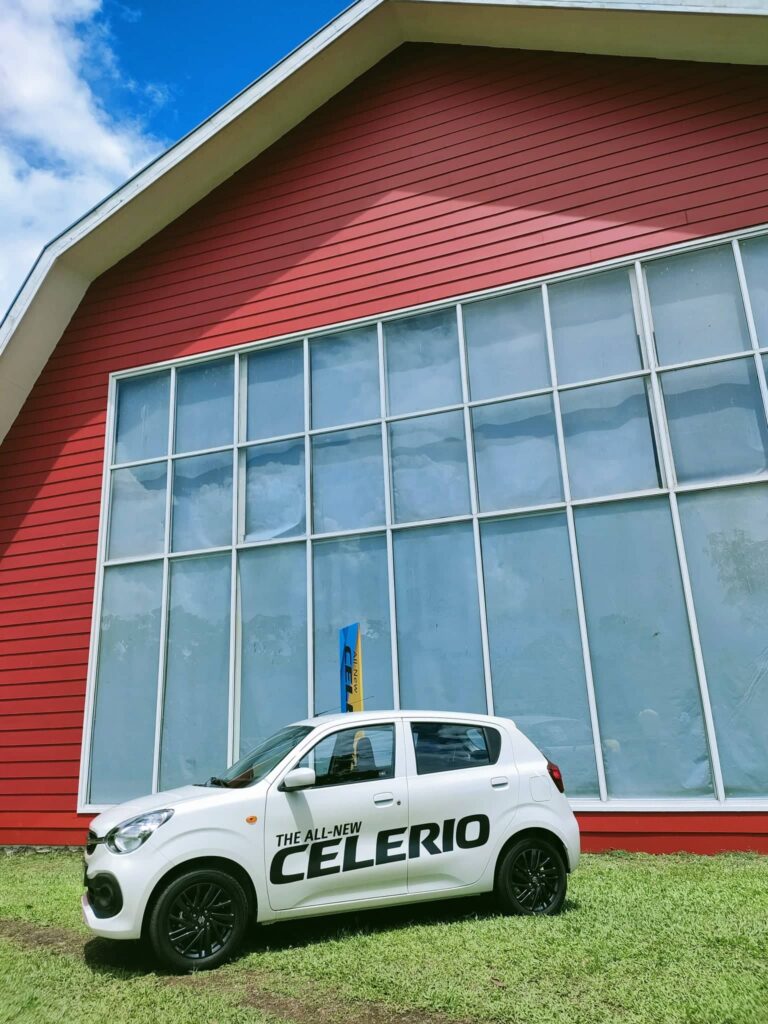 We had lunch at The Old Farmstead and did some team activities. We fed the sheep around the farm as well as the fishes in the pond. I even petted a lamb that was meek, sweet and lovable that I wanted to take it home. Meanwhile, the Celerios we drove were parked around the farm so we can take photos, which will be part of an online contest. Some of our media colleagues were able to capture the Celerio’s curved surfaces under the harsh sunlight or with the windmill in the background. I opted to take a photo of our red Celerio under a tree as if it was a fruit. 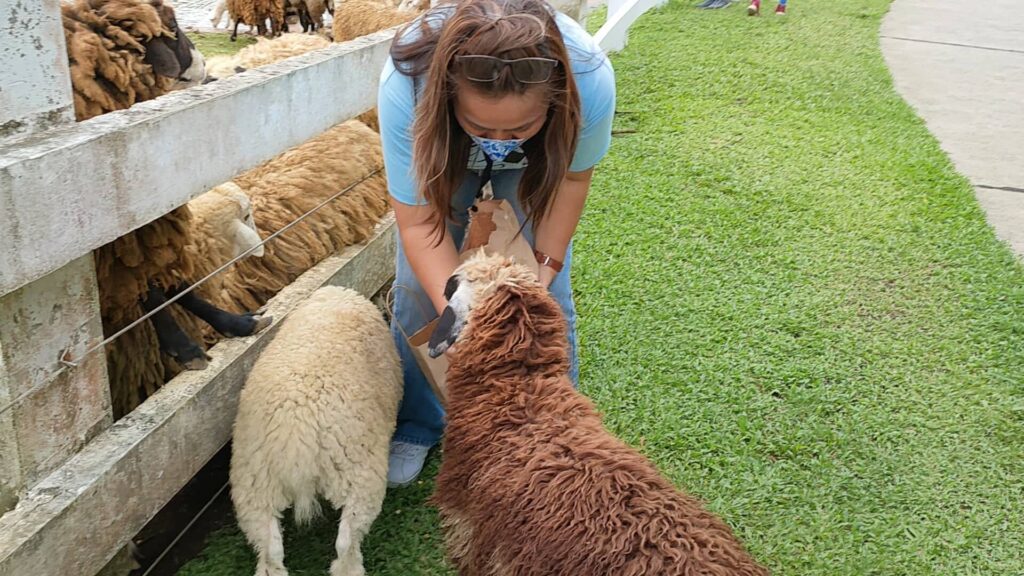 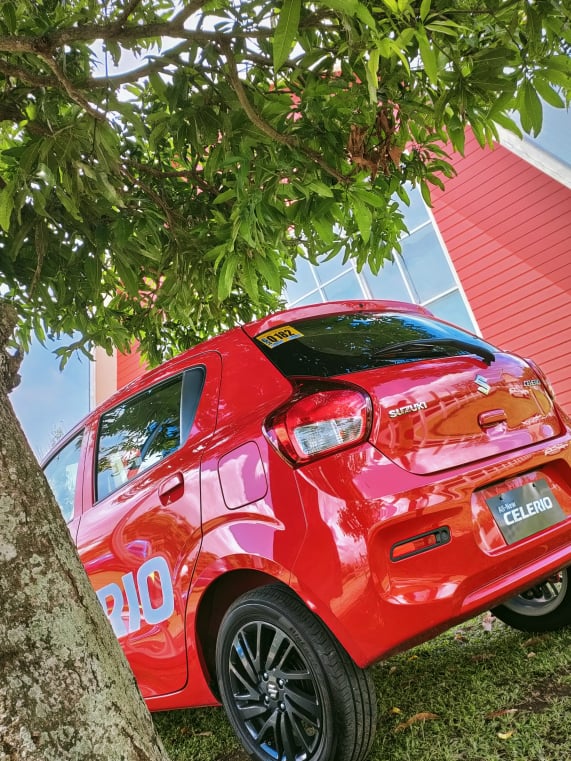 The Fruit of Progressive Engineering

Well, if you really think about it, the all-new Celerio is a fruit of all the innovation that has been engineered into it. Its rear lamps on the shoulder lines and its flared rear fenders all make the car look wider and more stable. The wheel wells now house 15-inch black alloy wheels while the body now features Suzuki’s Total Effective Control Technology (TECT) concept, which efficiently absorbs and disperses the energy in the event of collision. As a mom, I think of safety for my family when we’re on the road and the Celerio has tons of safety features. 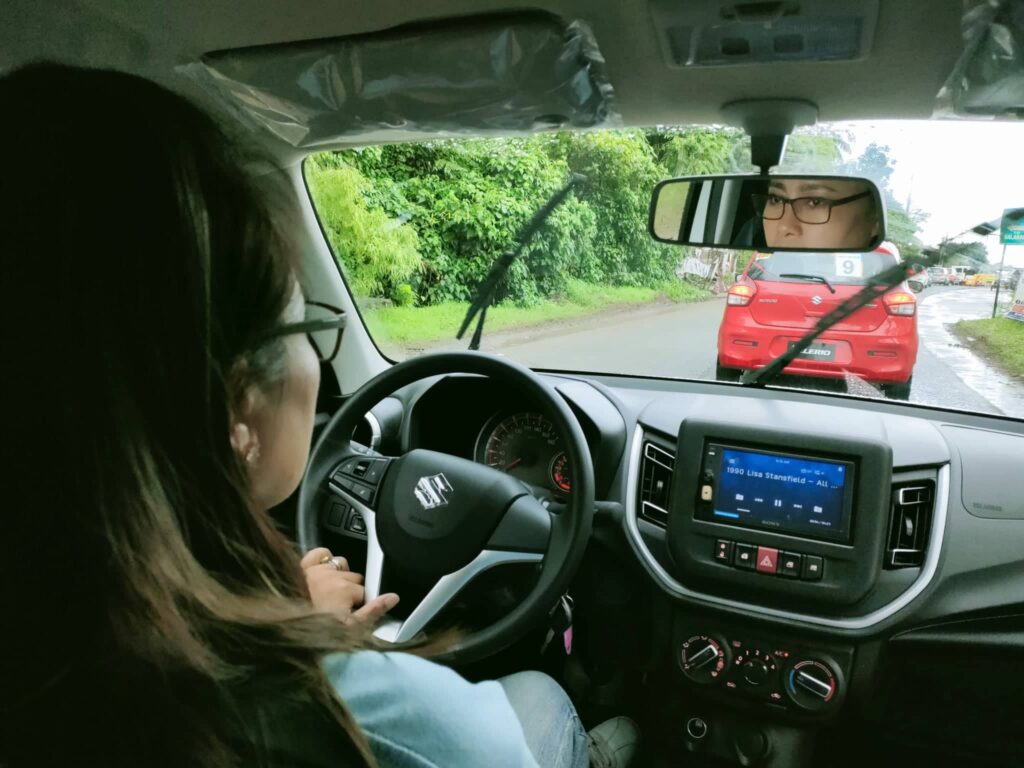 Speaking of being on the road, it was my turn to drive our white Celerio from the Farmstead to the TOTAL gas station along SLEX on the way back. I found it easy and fun to drive, responsive, economical, and quite nimble. It somewhat reminded me of my 2016 Suzuki Ciaz, which is logical because they come from the same family of well-engineered yet affordable vehicles. By the time we reached the Total gas station, I was getting used to the Engine Auto Stop Start System (EASS), which annoyed me at first but I appreciated it for being a fuel-saving and environment-saving feature.

From a Passenger’s Perspective

It was Henri’s turn to drive all the way from the Total gas station back to the Suzuki Auto Sucat dealership. I got to look around the interior of the Celerio and began to appreciate everything from the instrument panel, to the unique center and side vent grilles, to the 6.2-inch touchscreen infotainment system, to the audio controls on steering wheel, to the 60:40 split folding rear seats. I felt that there’s so much interior space in the new Celerio that belies its compact exterior. I appreciated the interior comfort even more when we got caught in crawling traffic on the Skyway. 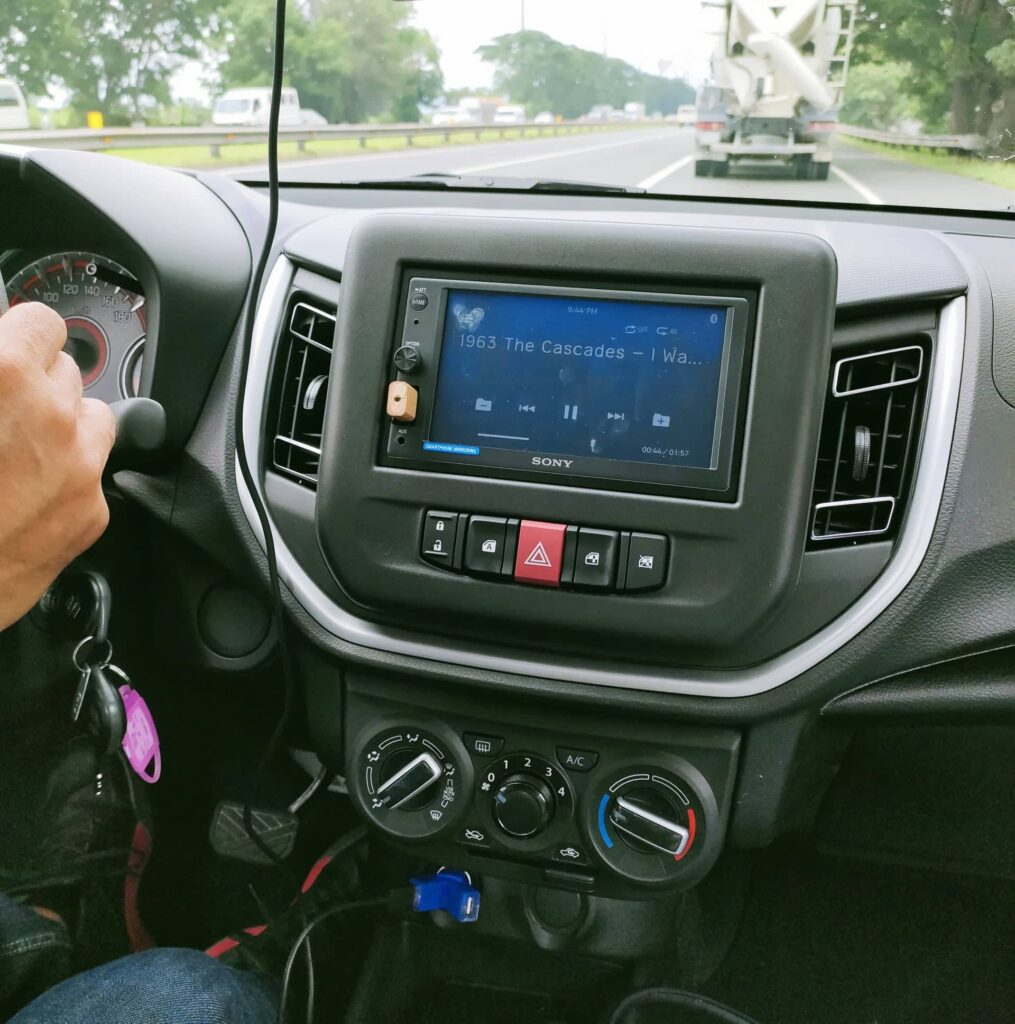 At P708,000, I think that the Celerio is priced perfectly for first-time car owners, especially those who are single, or for those newlyweds who are just starting a family. Our good friends at SPH say that the Celerio has been one of the crowd favorites due to its compact size yet spacious interior and I tend to agree. It’s small yet incredible. Best of all, the Celerio allows its occupants to live big every moment! 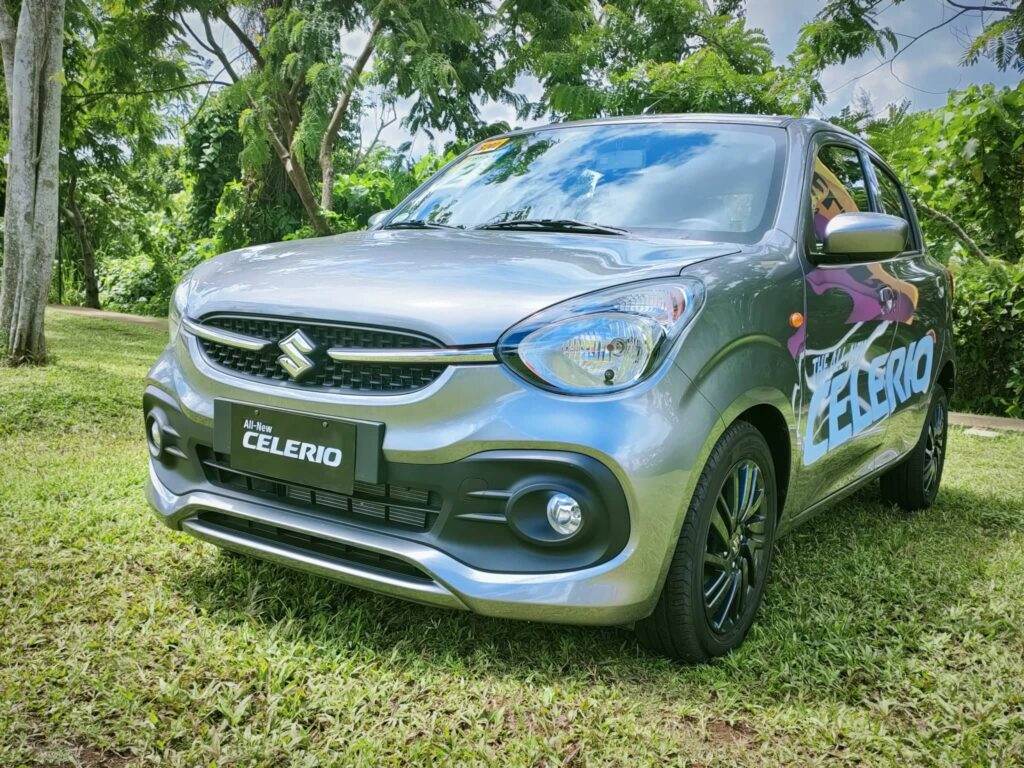 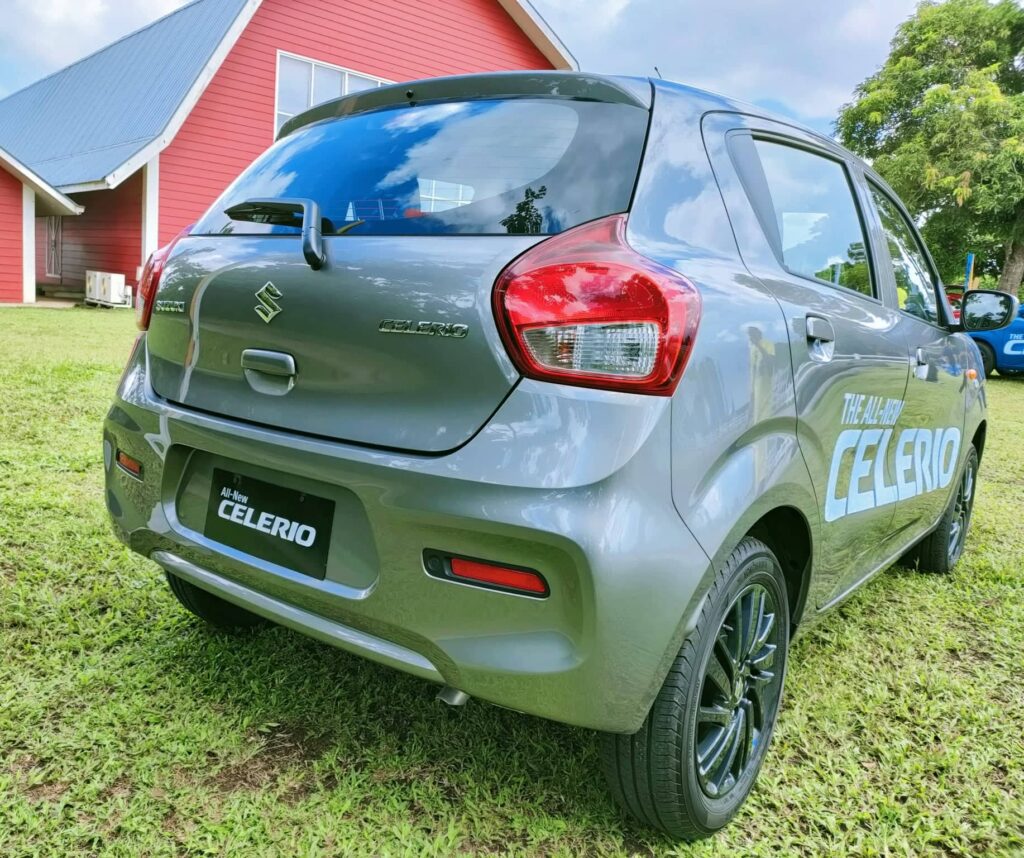 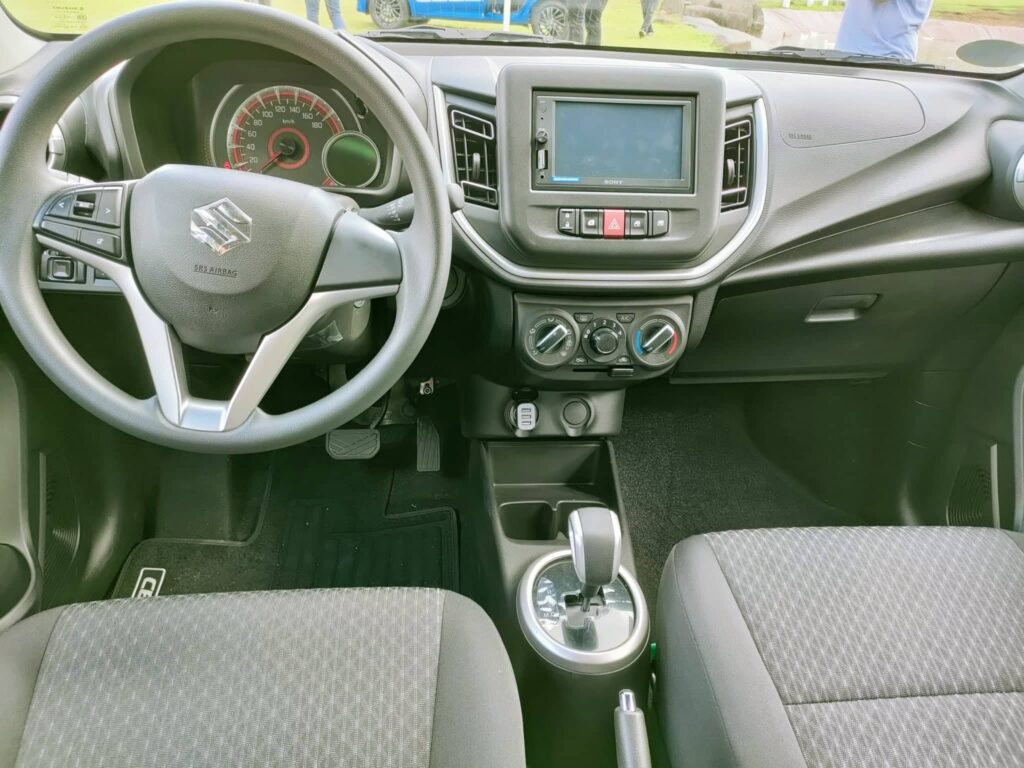 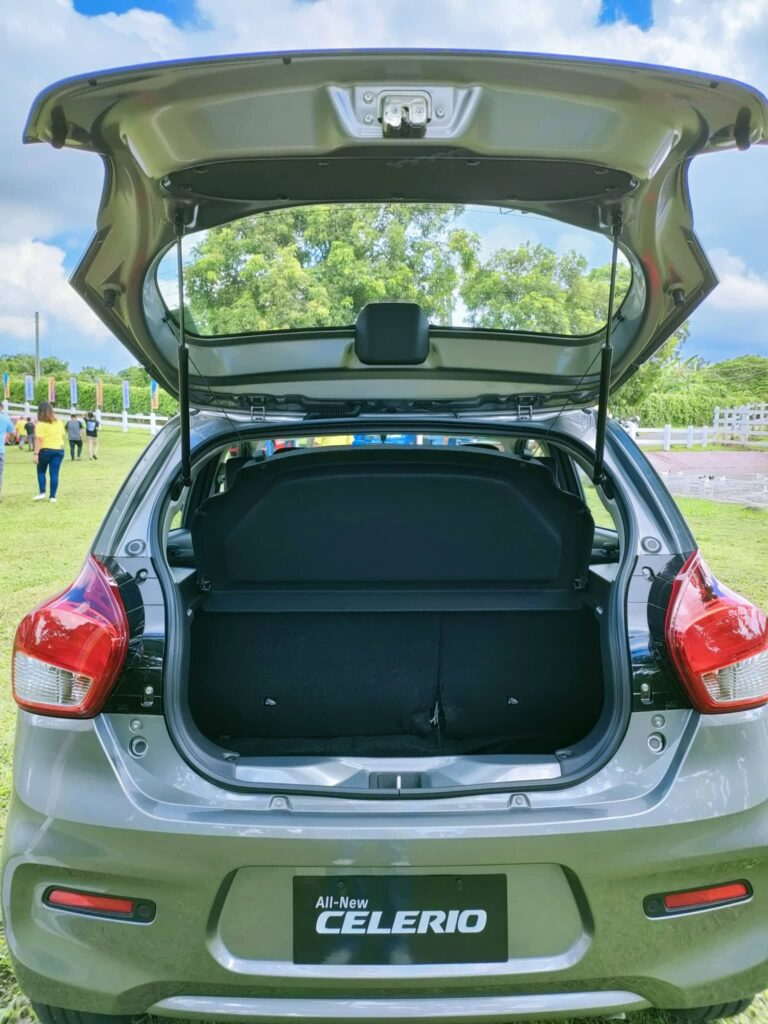 My husband and I have always taught our kids that to be a participant in a contest is already a blessing and to win the contest is a bonus. We’re happy that good friends in the media got their bonuses when they won the contests. And I’m happy for the blessing of being part of the Celerio Media Drive where it feels great to live big every moment!

The all-new Celerio is available in Arctic White, Glistening Gray, Fire Red, and Speedy Blue Metallic at 73 Suzuki Auto dealerships nationwide. Log on to their online showroom at https://auto.suzuki.com.ph/ for updates and more information.