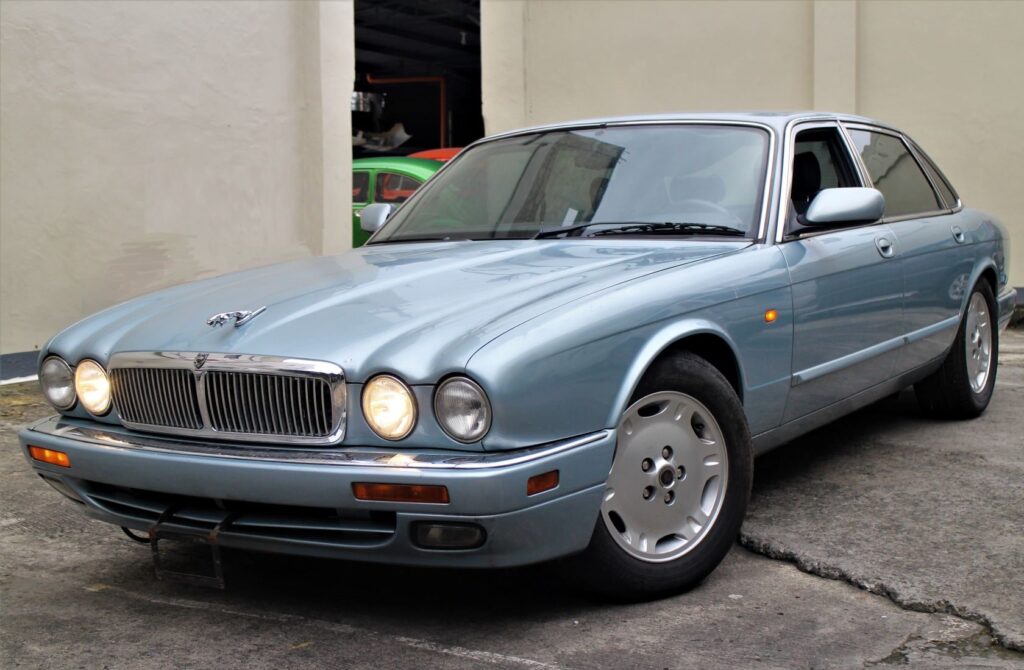 The last time we wrote about our 1995 Jaguar XJ6 project car was in March, when the technicians at JSK Custom Paint and Body Works were checking the drivetrain more thoroughly after they got it started and running. The 4.0-liter double overhead cam (DOHC) 24-valve (24V) AJ16 inline 6-cylinder engine started easily and was running smoothly while the ZF 4HP-24 four-speed automatic transmission was working properly. We noticed that the engine would sputter and quit when we leave it idling with the transmission in gear for some time, but Eduardo, JSK’s chief mechanic, said that we just need to get out and drive our Jaguar farther so its computerized engine and transmission management systems can recalibrate automatically. 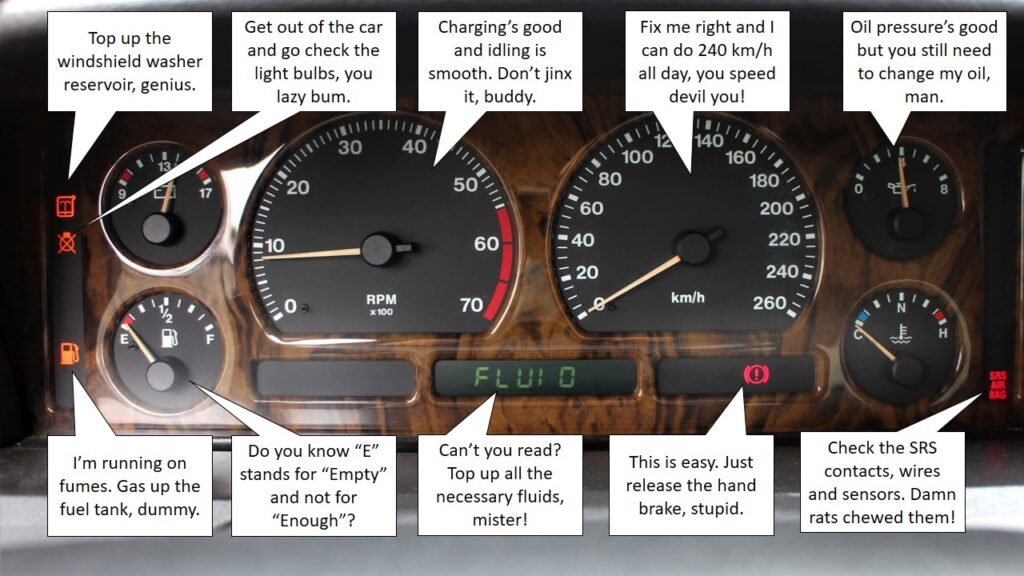 We always try to look for humor in any dire situation and the instrument cluster gave us the comic relief we needed.

We also noticed that the warning lights on the instrument panel lit up when the car first started but turned off a few seconds after the engine settled into a smooth idle. Some of the warning lights were easy to diagnose and fix, such as the low levels in the fuel tank and windshield washer reservoir, the busted light bulbs, and the low brake and transmission fluids. These things do tend to dry up or break after the car has been left idle for nearly 4 years. However, some of the warning lights, such as the “SRS Airbag” needs a more detailed technical diagnosis and trouble shooting, especially since some of the wires and hoses in the engine bay has been chewed and gnawed by rats. 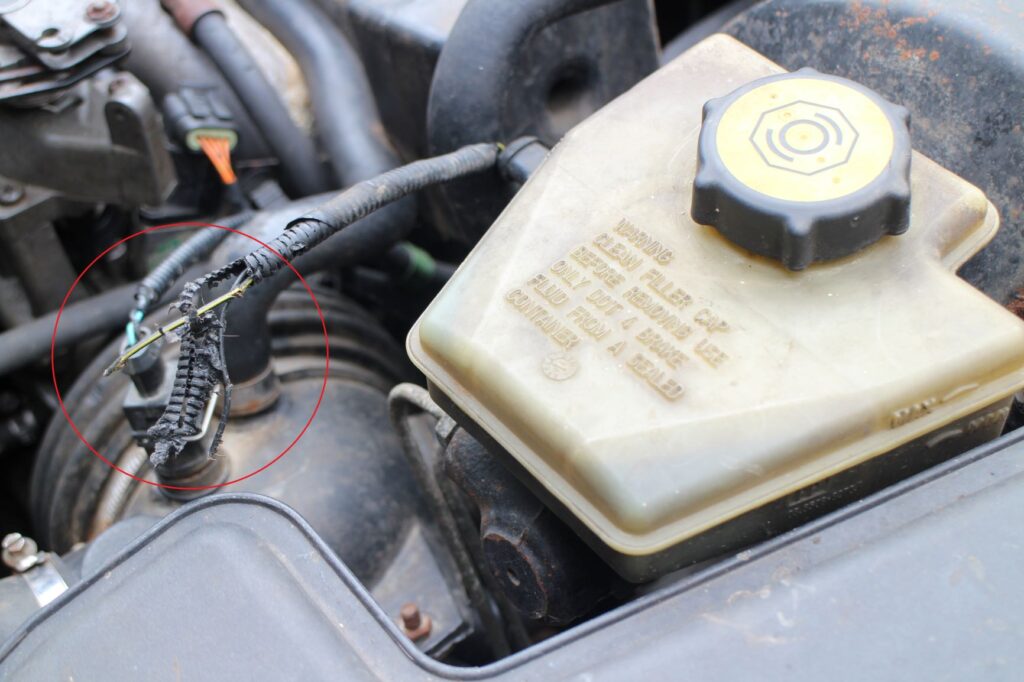 We had to trace each wire in the engine bay to see if it was gnawed on by rats and if it can be repaired.

Phase 2 of the Game Plan

To keep our restoration costs more affordable, Johnson Tan, the proprietor of JSK, suggested a game plan where (1) we get the Jaguar running and driving; (2) we have it cleaned inside and out; and (3) we drive it on the road to debug it and perform the needed repairs as we go along. Now that we’re done with the first phase of Johnson’s game plan of having the car running and driving, we go into phase 2, where we have to clean it inside and out. Johnson remembered that our friends at Meguiar’s Philippines were asking JSK to provide a “very dirty” vehicle that they will clean and detail. He instructed us to get in touch with Meguiar’s big boss, Alec Santos, and we proposed to have the cleaning and detailing documented in photos and videos. However, the government imposed new restrictions to prevent the spread of the highly-contagious COVID-19 Delta variant, so we had to wait until the restrictions were lifted. 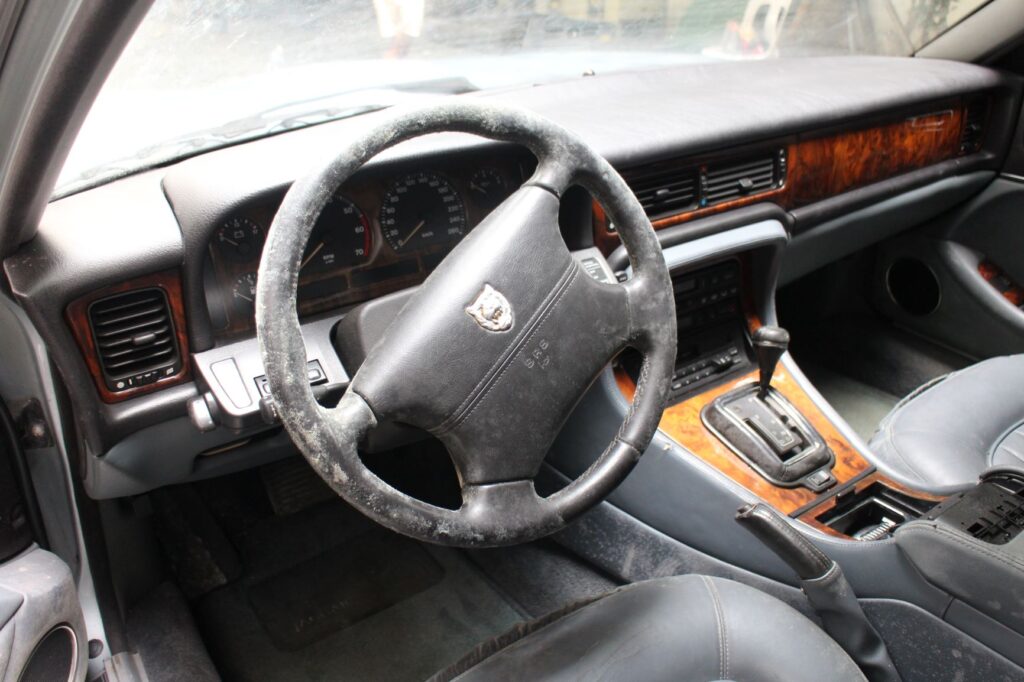 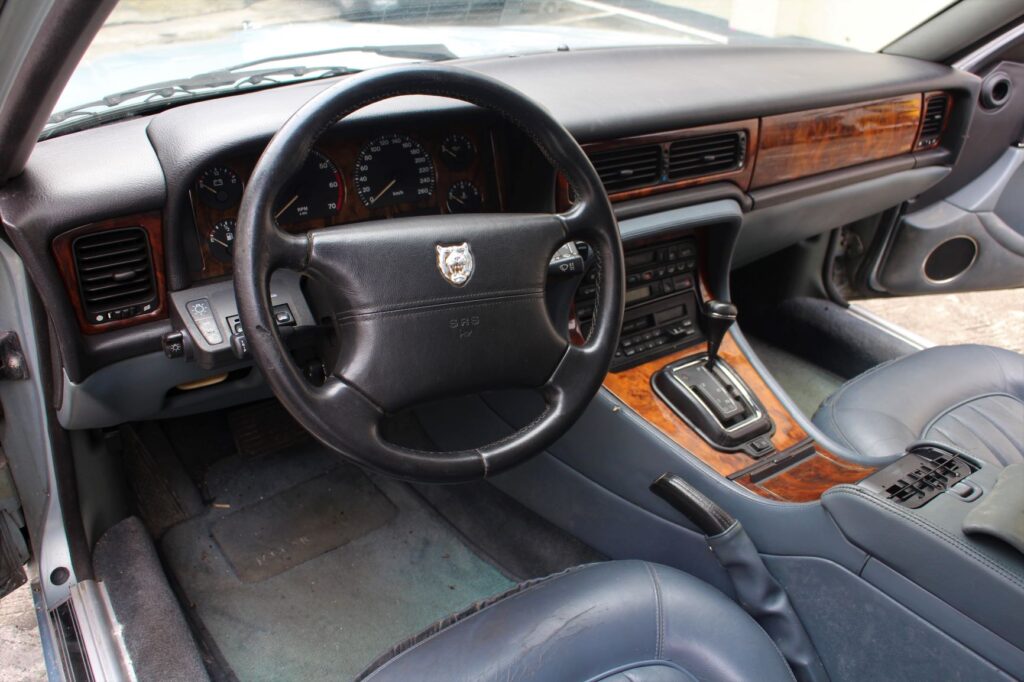 … until the JSK technicians cleaned it up a bit after they got the car started.

After the government restrictions were lifted, Meguiar’s Philippines’ Erlyn Gonzales sent two of their best technicians, Alley Bonifacio and Darwin Mercado, to the JSK workshop in Marulas, Valenzuela City, where they worked on cleaning and detailing the Jaguar for two and a half days. They used the latest car care and detailing products on the Jaguar including Meguiar’s Mirror Glaze 105 Professional Ultra-Cut Compound to cut through the grime on top of the finish and  Meguiar’s Mirror Glaze 105 Professional Ultra Finishing Polish to bring the paint back to showroom shine. They used new 7-inch cutting and polishing pads on their rotary polisher power tool such as the Meguiar’s WRFC7 Soft Buff Rotary Foam Cutting Pad to help cut the grime more efficiently, Meguiar’s WRFP7 Soft Buff Rotary Foam Polishing Pad to help bring back the paint luster and Meguiar’s WRFF7 Soft Buff Rotary Foam Finishing Pad to help ensure a deeper, shinier sheen. 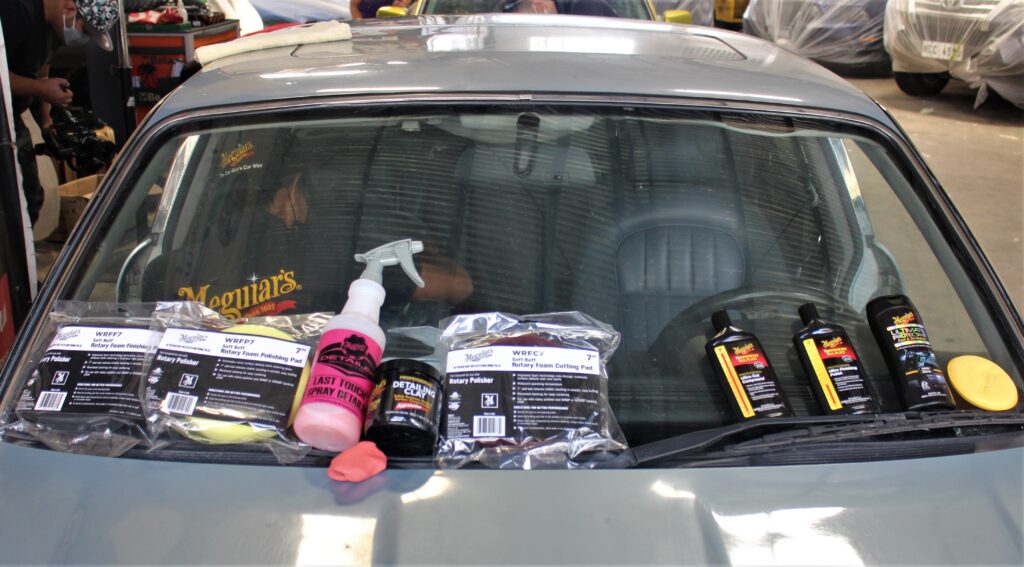 The cleaning and detailing technicians displayed the latest Meguiar’s products they used on our Jaguar. 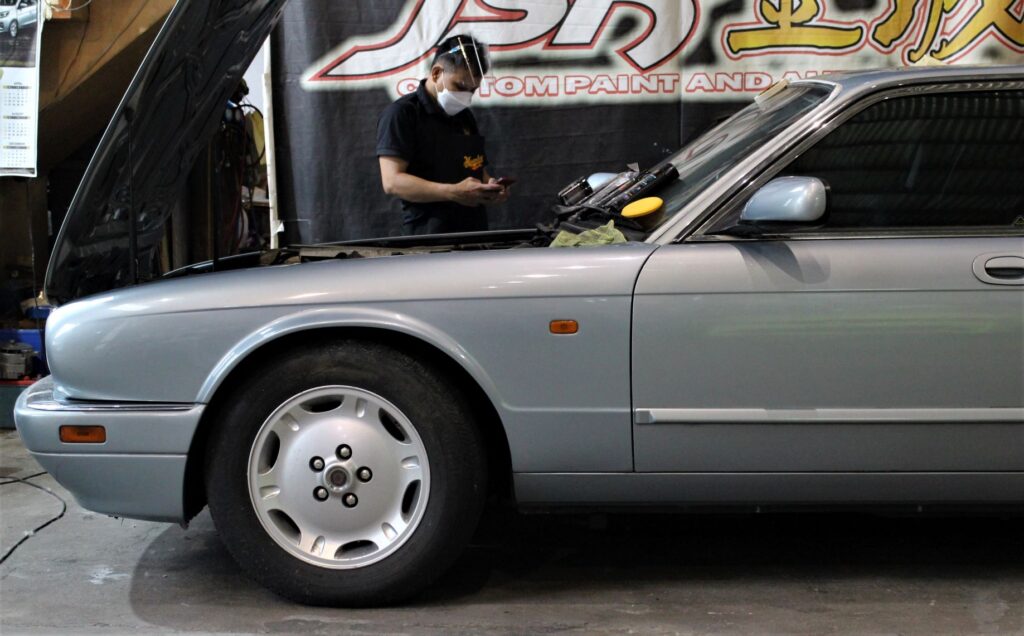 Meguiar’s technician Alley Bonifacio checks the paint depth and surveys the panels before he starts to work.

A Hive of Activity

Like busy bees, the Meguiar’s technicians worked tirelessly on our project car. To maximize the use of their time, one technician worked on the exterior of the car while the other one worked on the interior. Alley started cutting the grime off the top (roof), bonnet (hood) and boot (trunk lid) of our British luxury sedan using his rotary power tool with the appropriate Meguiar’s products. He paused every now and then to survey the finished work, to determine the intensity and speed of the polisher, and to use the required Meguiar’s product to restore the faded paint’s lost luster. 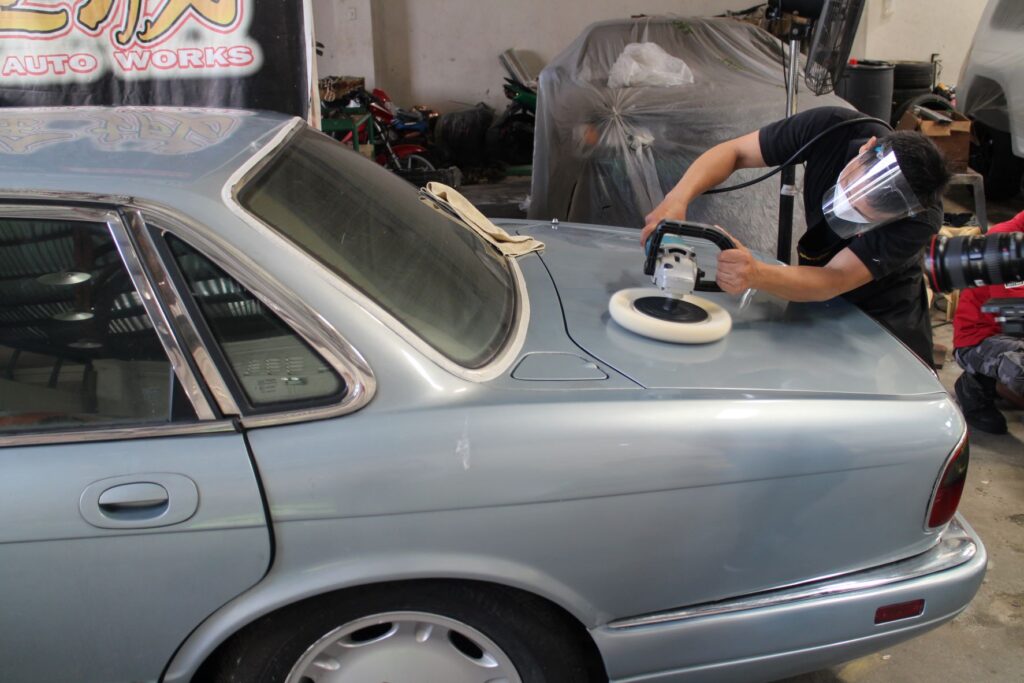 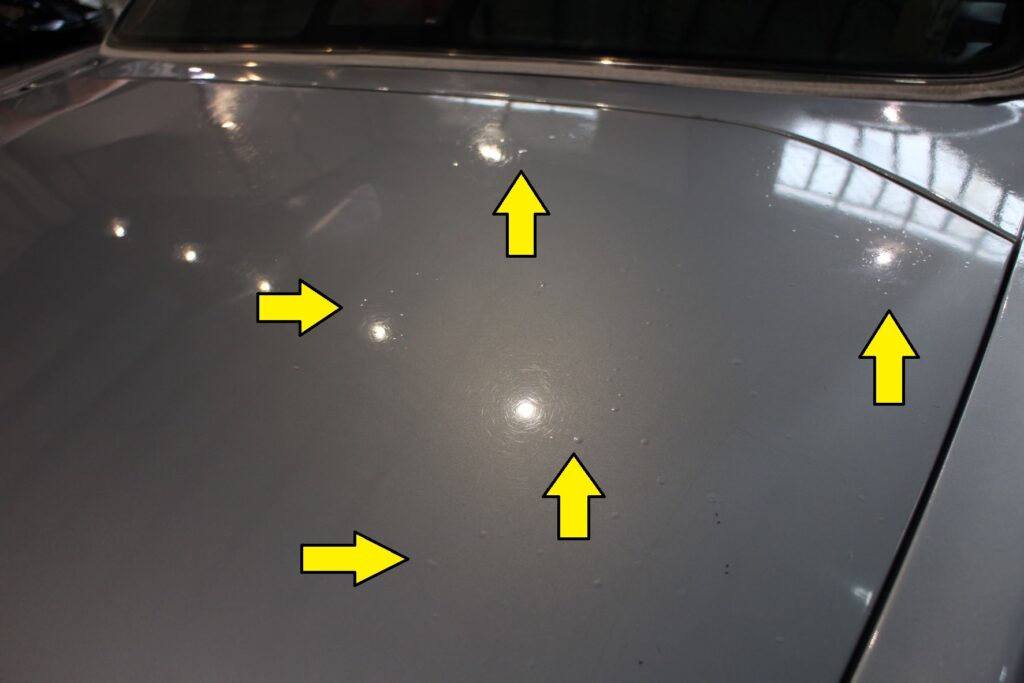 … that revealed some small paint bubbles and blisters, which can only be corrected with a respray in the future. 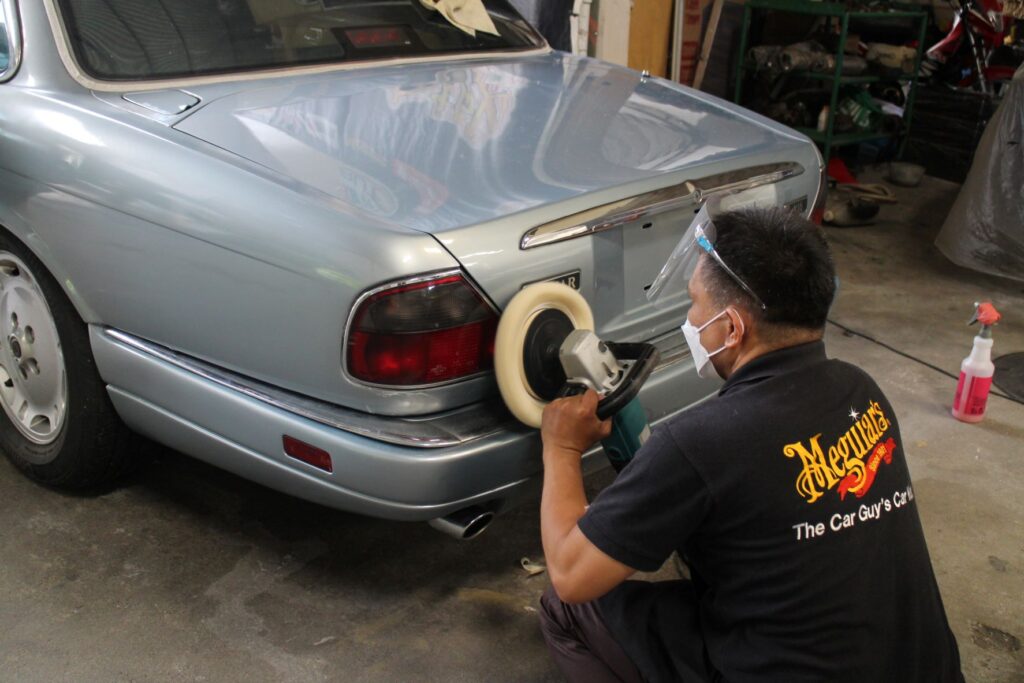 Alley continued to polish the rear section of our Jag, which still has its original Sea Frost Blue factory finish. 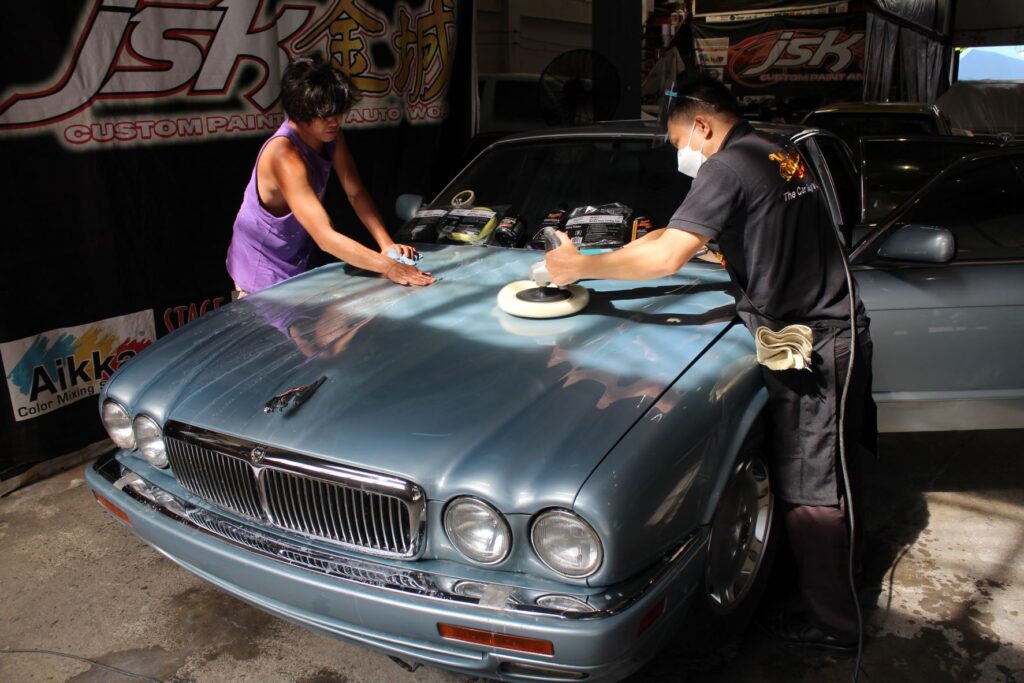 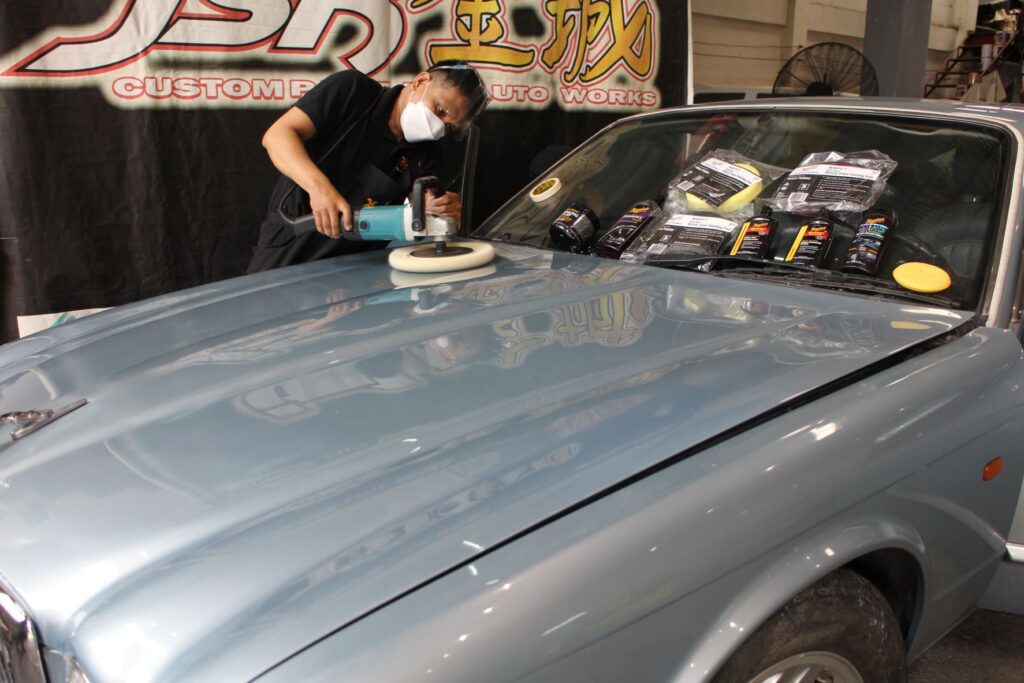 … before he proceeded to buff and polish the entire hood. 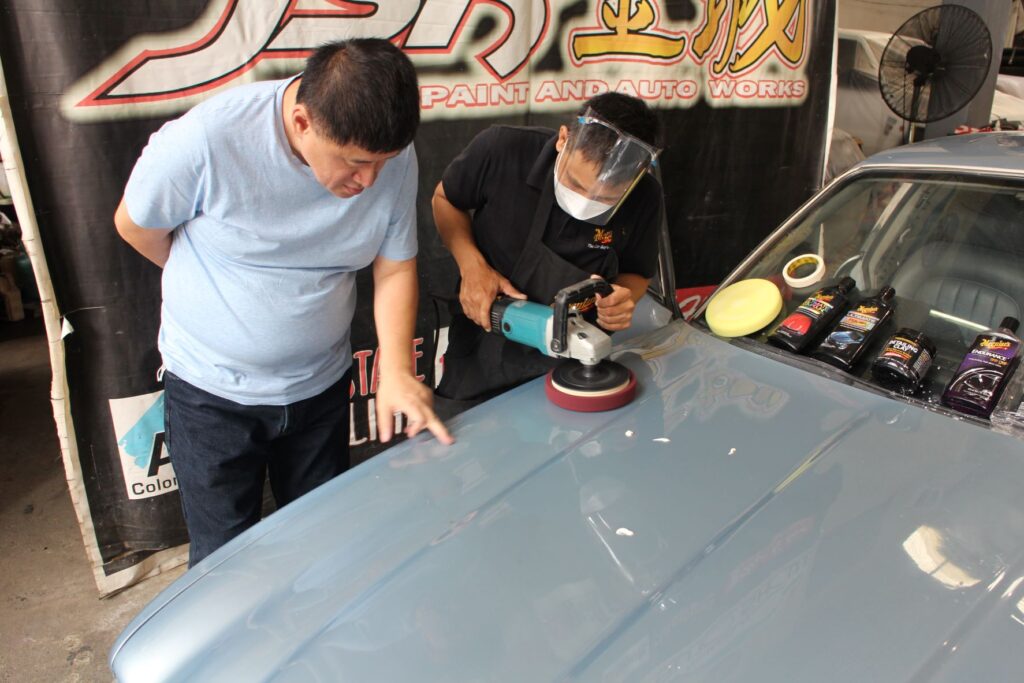 Meanwhile, Darwin started by cleaning the leather seats with – get this – a toothbrush (or at least a brush that looks like one). Man! We salute the work ethics and dedication of these Meguiar’s technicians as they hunkered down to work on cleaning even the smallest detail of our project car. Please remember that our Jaguar sat abandoned and forlorn in an open space behind a building, where it was exposed to sun, rain and rodents. Thus, Darwin had the heavier load working on removing the mildew, dust, mud, and dead insects that went into the interior of the car during the almost four years it sat unused and unloved. After a thorough cleaning, the interior was treated to dabs of Meguiar’s Ultimate Protectant Dash & Trim Restorer. 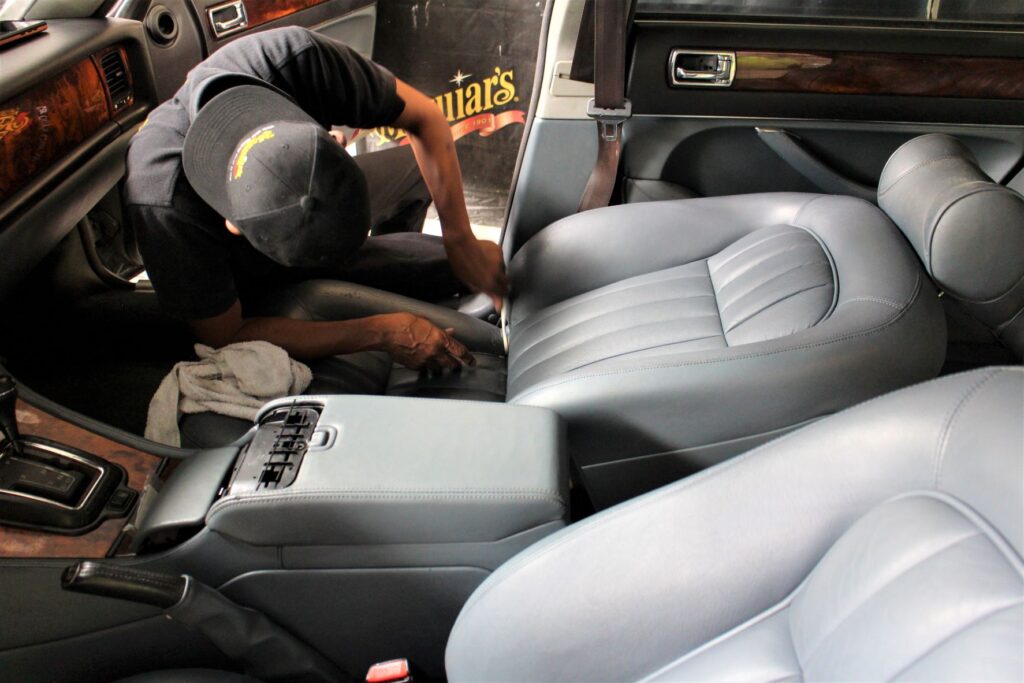 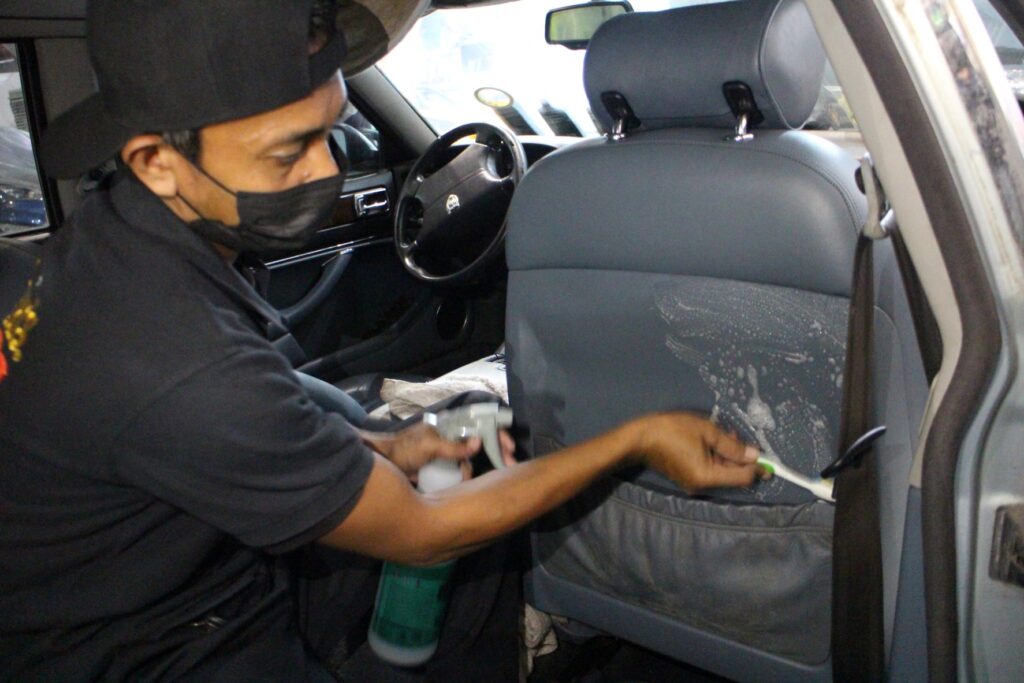 … using a small brush (that looks like a tooth brush) to clean even the tightest and smallest crevices. 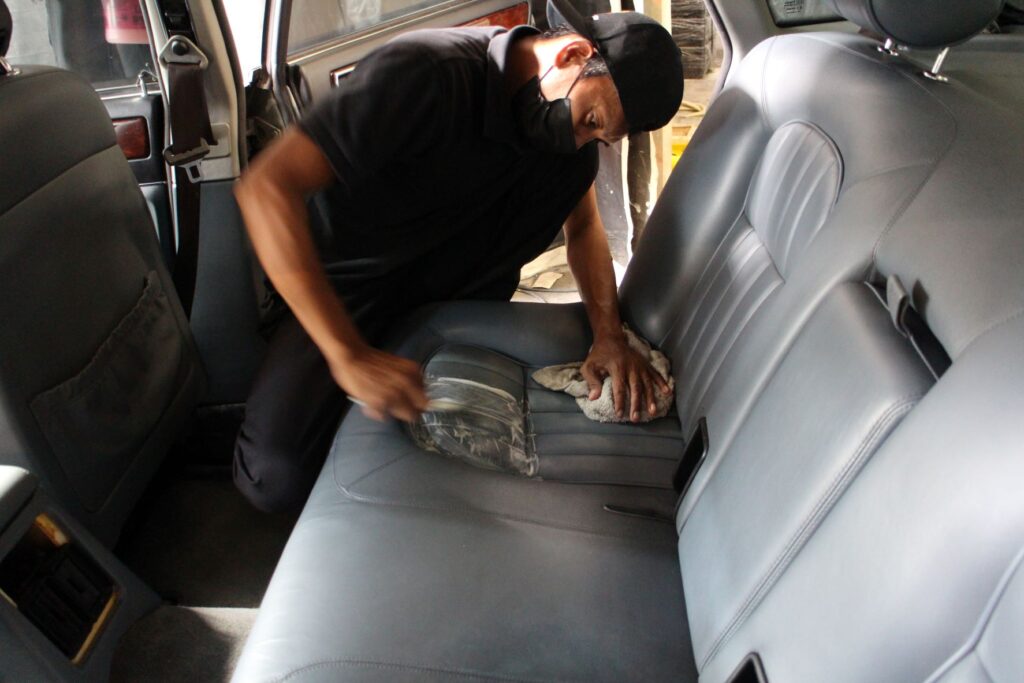 Darwin wiggled his way into the backseat where he repeated the process of cleaning every crease, hem and fold before applying some leather treatment to the seats. Note the missing rear A/C vent behind the center console. 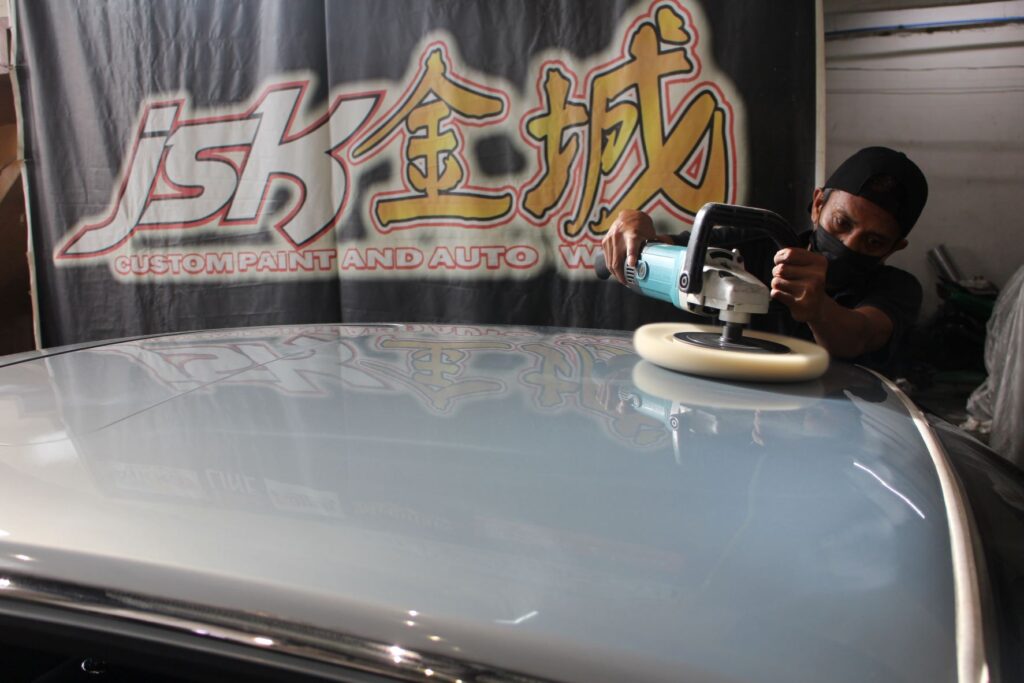 After he was finished with cleaning the interior, Darwin buffed the roof to a mirror-like finish… 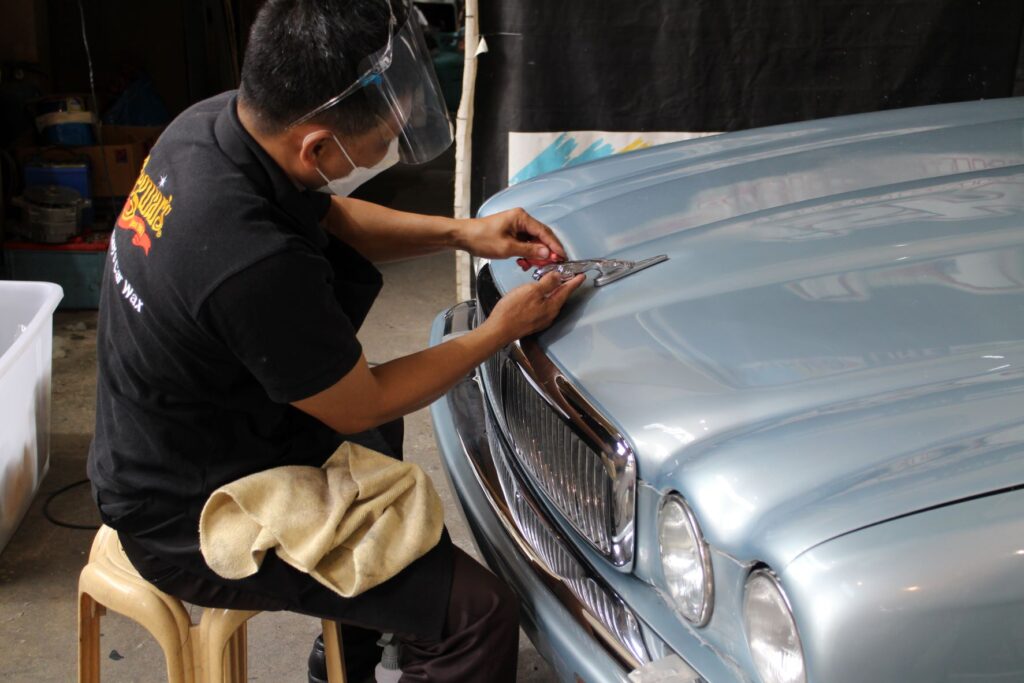 … while Alley used the Meguiar’s Detailing Clay to polish our Jag’s chrome and glass parts. 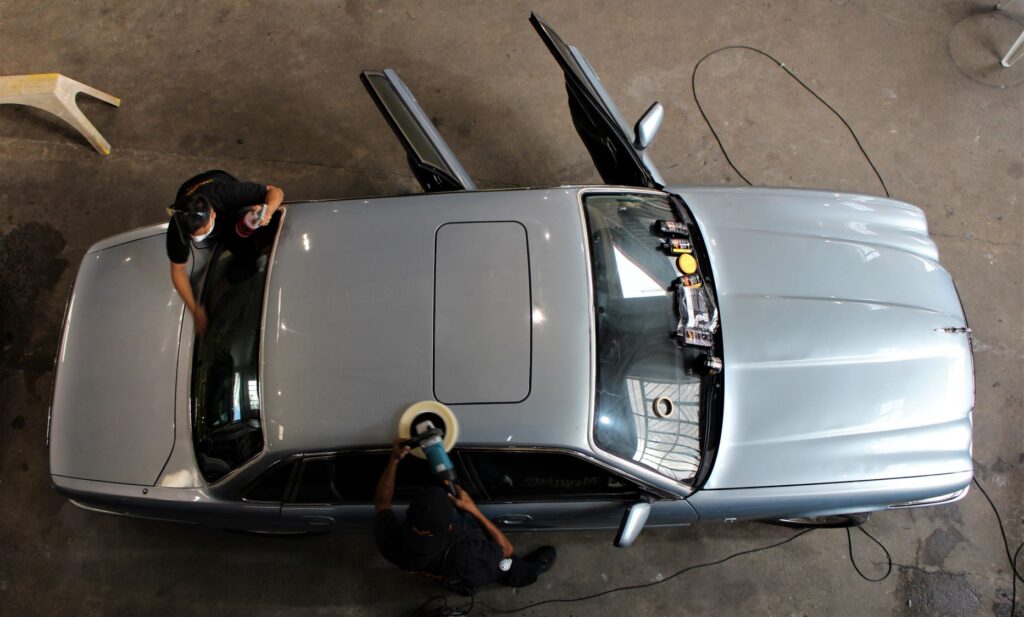 It was a joy and an honor to watch and record these two Meguiar’s technicians at work.

Cleanliness is Next to Godliness

Our admiration for the two Meguiar’s technician grew even more when, on the second day of their two-day assignment (August 27-28) to work on our Jaguar, Alley and Darwin called their head office to ask for some more time to put the finishing touches on our car. Since the following day was a Sunday (August 29) and it was followed by a holiday (Monday, August 30), they returned on Tuesday, the 31st, to finish the job. We arrived late Tuesday after lunch and found Alley and Darwin already packing up their tools, equipment and Meguiar’s products. They finished the car before we got to photograph and record them! They were that efficient and the results speak for themselves. 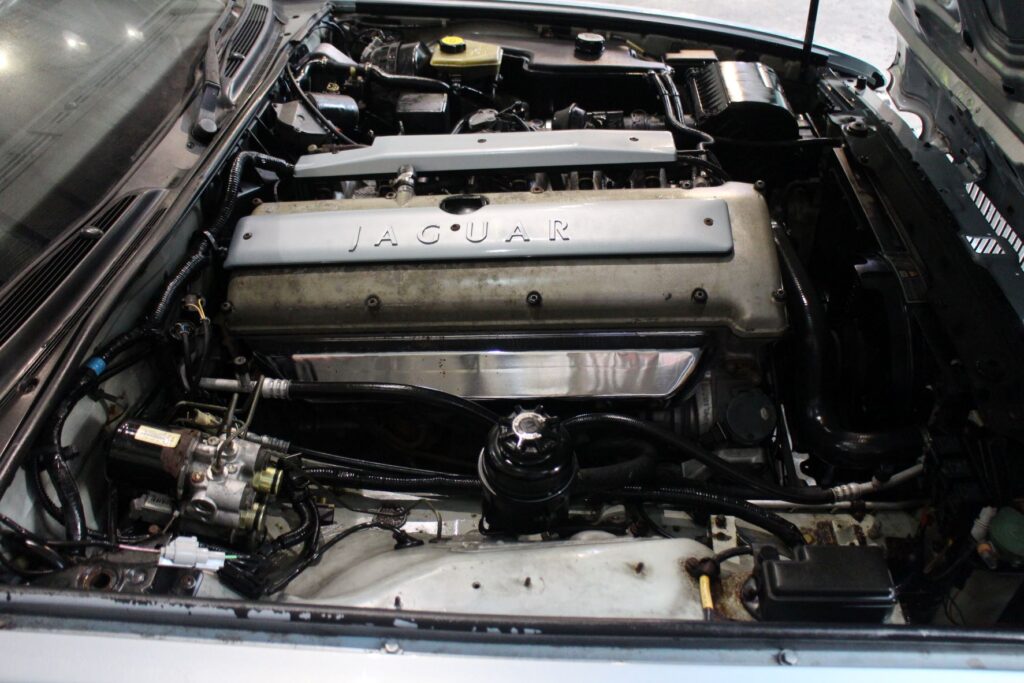 We were not able to catch the Meguiar’s guys cleaning the engine bay but here it is after. We still have a lot of work to do like change the oil, filters, sparkplugs, etc. but at least, we have a clean engine to work on. 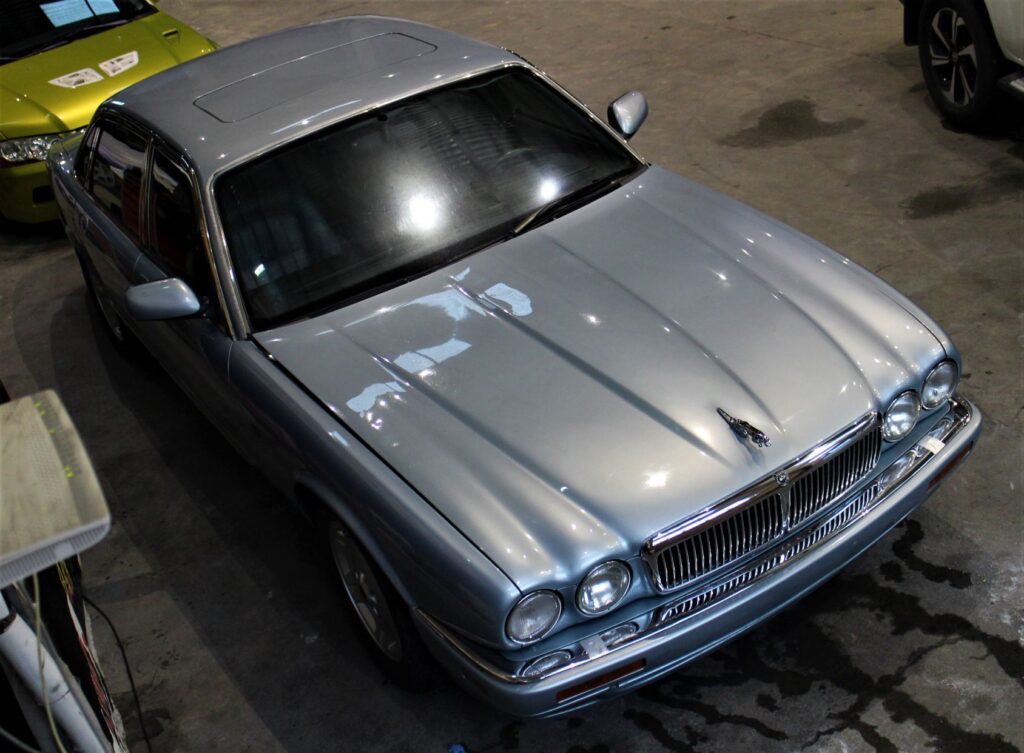 The Meguiar’s treatment made our P50,000 Jaguar look like a million bucks! 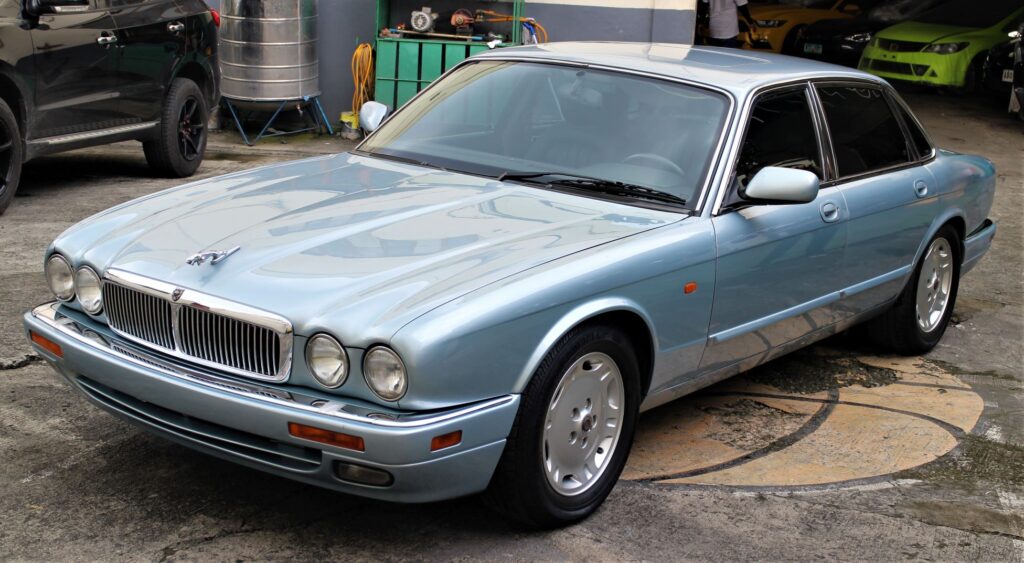 With the gleaming chrome and shiny paint, our Jaguar finally looks like the sleek luxury automobile that it was made to be. 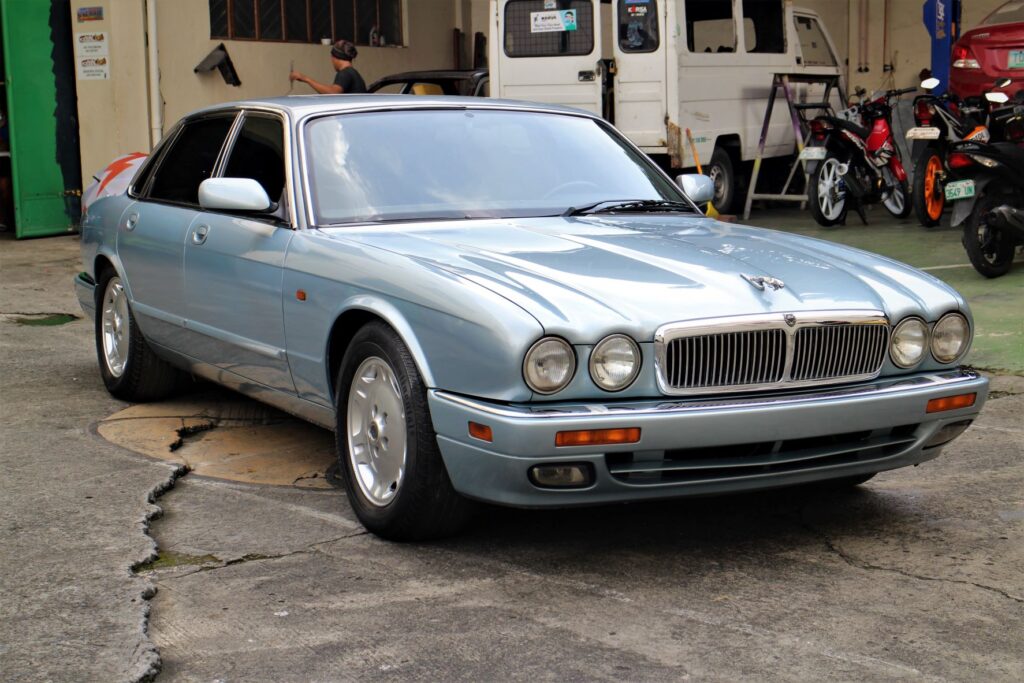 Even the experienced paint and body guys at JSK were surprised with how our Jaguar turned out after the Meguiar’s treatment. 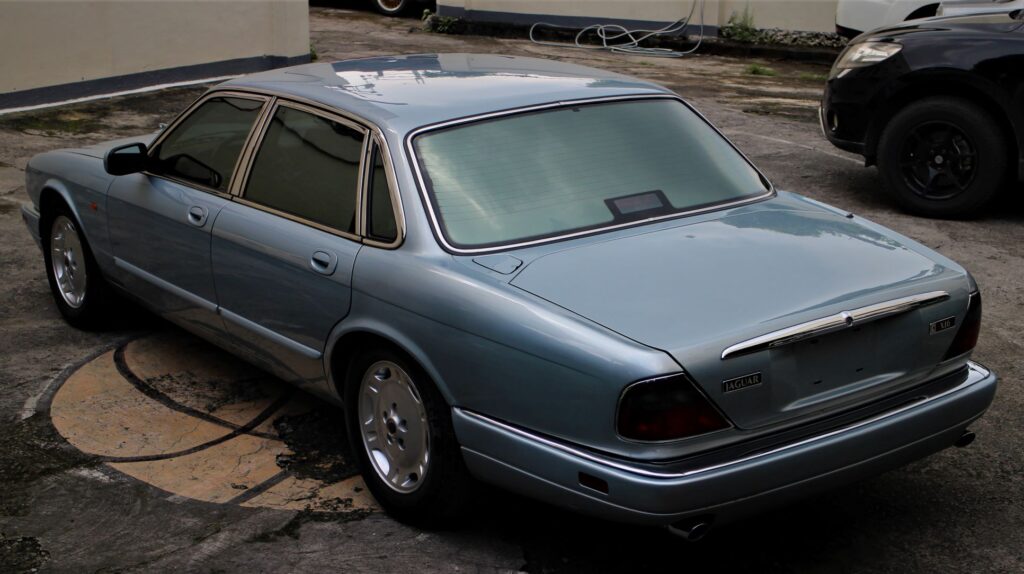 Anywhere you look around the car, it looked like it just came from the showroom… 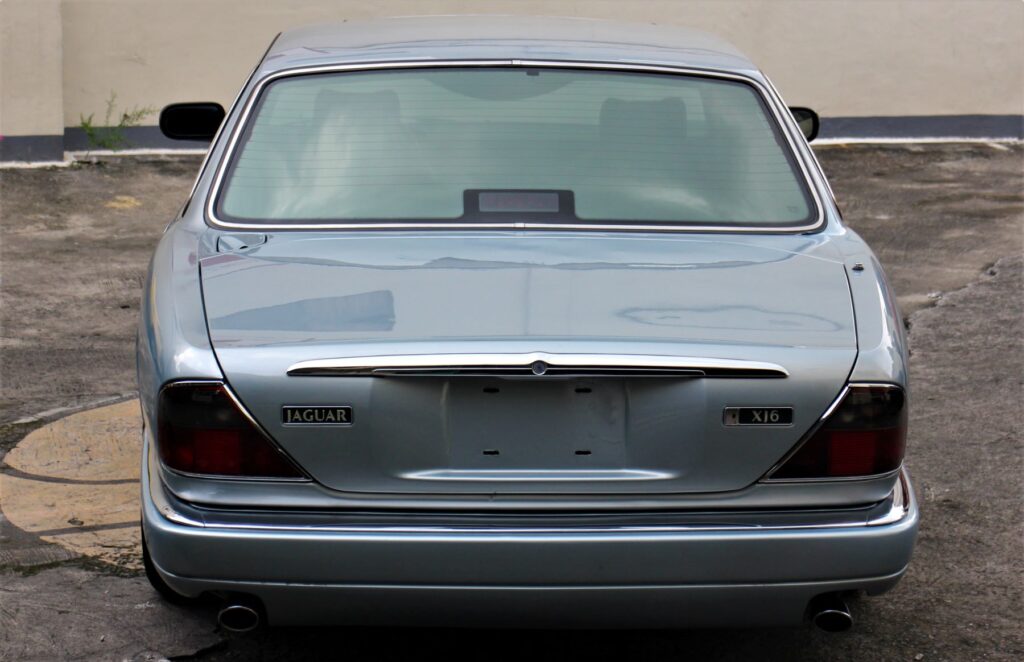 That long and low trunk line and rear end with those twin exhaust outlets now looks a lot sexier. 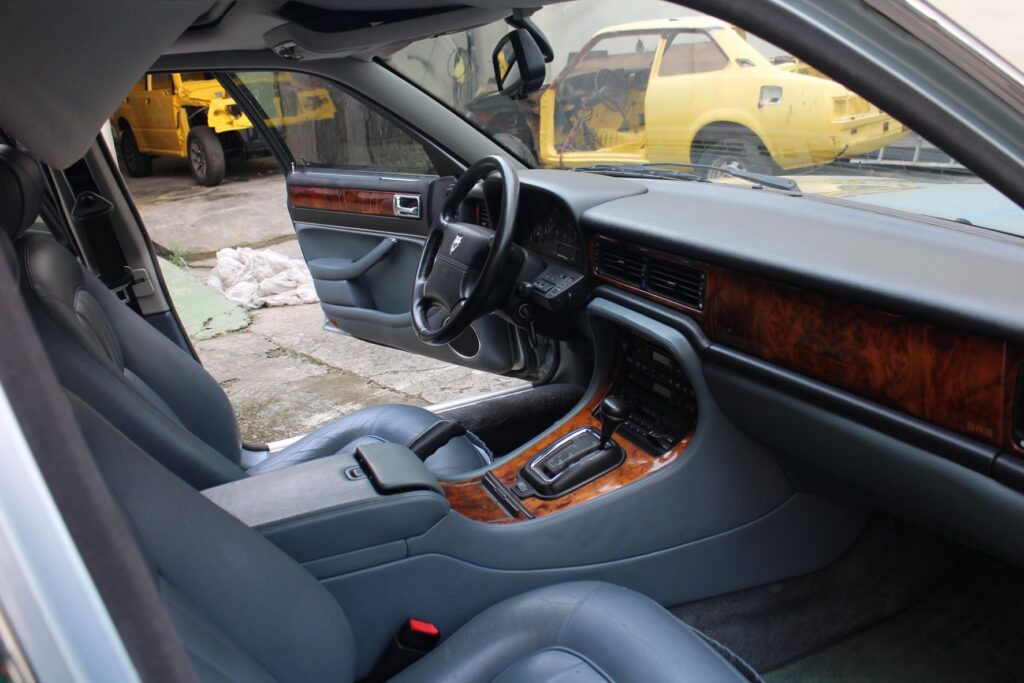 We can now work on the interior repairs, including that loose ceiling material, without becoming itchy because it’s now so clean! 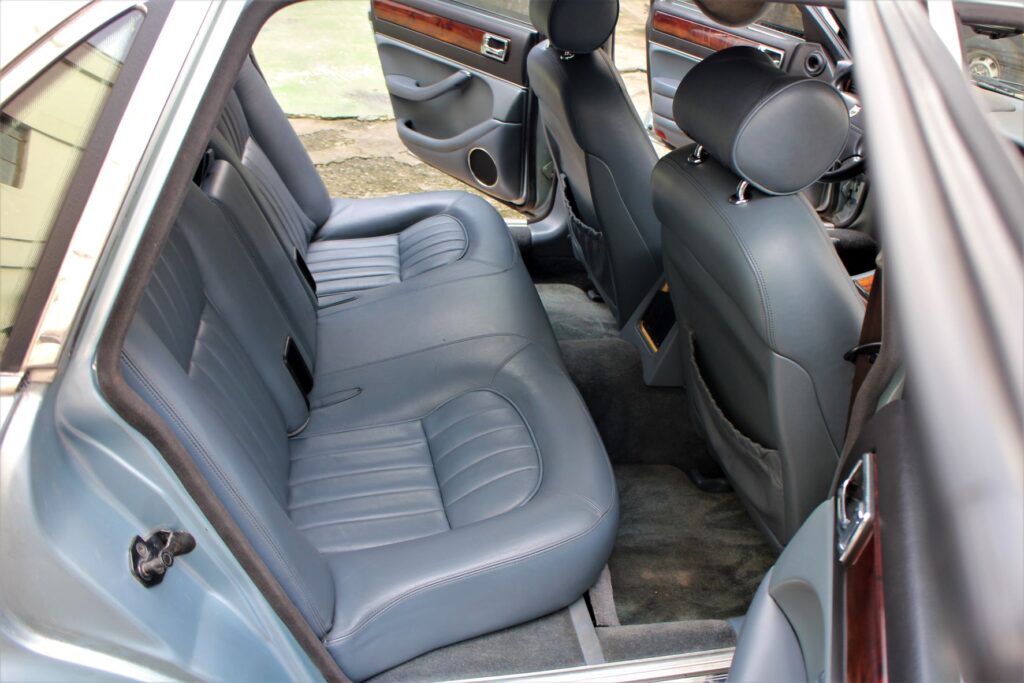 The rear seats are back to being an epitome of luxury and comfort.

Thus, we owe our good friends at Meguiar’s Philippines – Sir Alec Santos, Erlyn Gonzales, Alley Bonifacio and Darwin Mercado – whole debt of gratitude as we owe Johnson Tan the same for coming up with an affordable 3-phase program to make the restoration of our Jaguar more affordable. To move on to the next phase, we will have to update our project car’s registration with the Land Transportation Office (LTO), which means subjecting our car to either an emission test at a private emission testing center (PETC) or a complete inspection at a private motor vehicle inspection center (PMVIC). But before we can do that, we must first ensure the health of its DOHC 24V straight-6 by changing the oil, filters, and sparkplugs. We’re crossing our fingers that we keep getting nothing but good luck with our classy Jaguar!

We can’t help but compare how our Jaguar looks now…

… and how it looks like when we first got it. 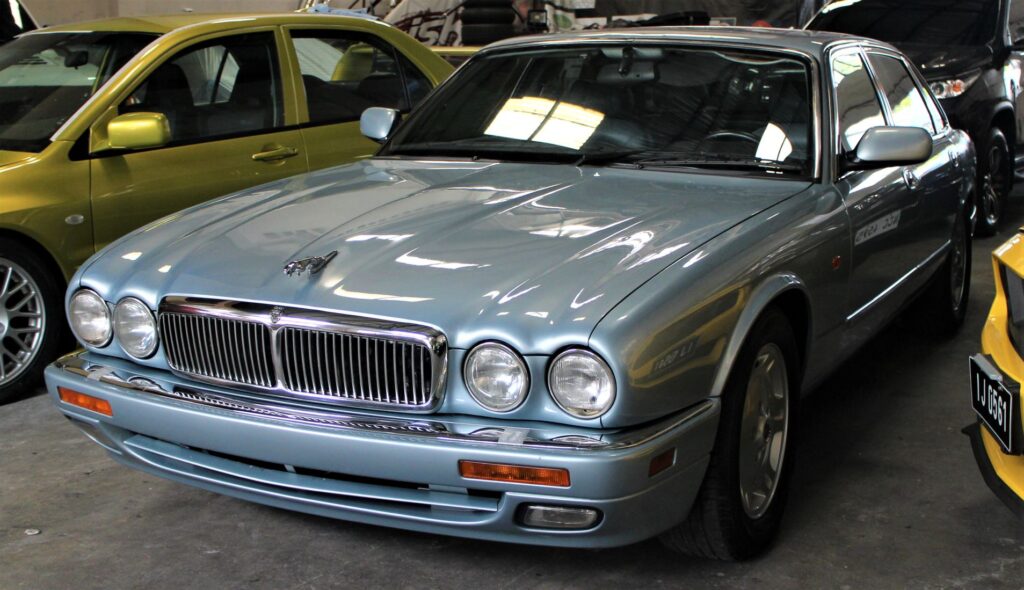 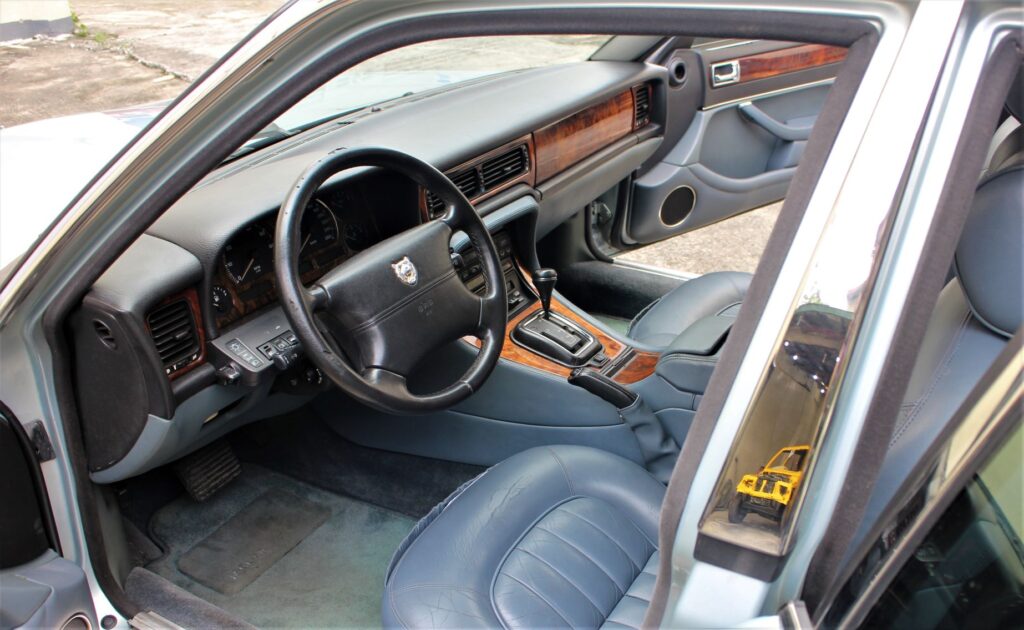 … we can’t wait until we can get in and drive away!