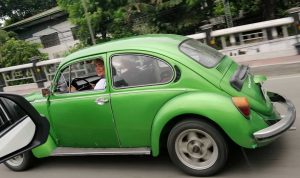 Last June 26, 2019, we drove home a green 1974 Volkswagen Super Beetle 1303 S – a FREE gift from its former owner and Beetle enthusiast, Ildefonso “Fons”Caluag, for helping restore his beloved cream 1973 VW Beetle 1300 S. We had a difficult time getting the green Bug started while we were retrieving it from Fon’s garage because its battery was flat. We finally got it started with a borrowed car battery that had a full charge but on our drive home, our green Super Beetle stalled twice. Its engine first stalled at the Petron service station a few hundred meters away from the Caluag residence in Pandacan, Manila because of a water-clogged fuel filter, which prevented fuel from getting into the carburetor. Then, it sputtered to a stop along E. Quintos Street  in the Sampaloc district because the contact point fouled up, which prevented the spark plugs from firing. 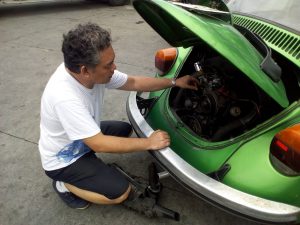 On our way home, our green Super Beetle first stalled because of fuel issues… 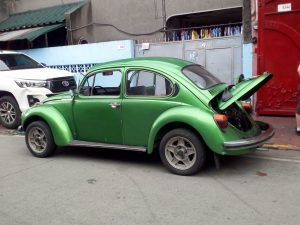 … and the second time because of ignition issues.

We also felt a strong wiggle at the front end of our green Super Beetle when we drove it at speed. Our initial suspicion pointed to imbalanced front tires but after narrating the incident to the former owner, Fons recommended that we take a look at the rubber bushings of the tie-rod and stabilizer bar. For the mean time, we temporarily parked it in one of the garages in our ancestral home along Blumentritt Street while we try to formulate a plan for our new/old Power Wheels Project Car. We gave it a quick wipe-down to take the dust and grime off and, at the same time, assess the general condition of our green Bug and list down the work we need to do. 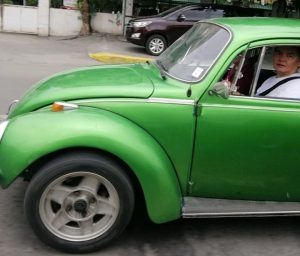 The front end of our green Super Beetle wiggles and vibrates at speed. 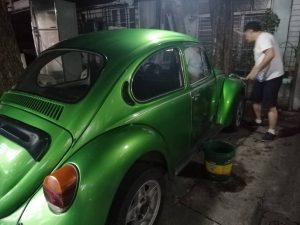 We gave it a quick car wash to get a “feel” of its paint and assess the steps we need to take.

Our green Super Beetle may look good in pictures but it has a lot of flaws. The more obvious flaw is its paint finish, which is beginning to peel off in some panels, especially at the edges of the rear fender where the paint looks like a stick-on foil applique. According to Fons, he had the 1303 S repainted sometime in the mid ’80s and had its color changed from the original light blue to the metallic green it currently wears. He narrated that he wasn’t really satisfied with the paint job then. He added that the passenger door was later involved in a minor collision with the gate of their garage and that it was repaired and re-sprayed but it did not match the green paint of the rest of the body. 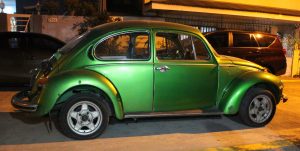 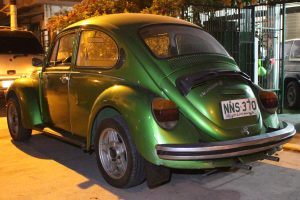 … and some of the paint is beginning to peel off or warp like it was a sticker. 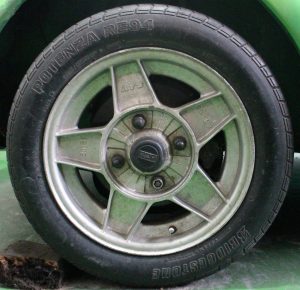 We also found some paint bubbles on the hood and in other panels but thankfully, we have not found any rust so far. We believe that being parked in a garage with a roof shielded the steel-bodied Super Beetle from the elements and prevented its rapid oxidation. We found some surface rust on the front bumper, as well as on the rear bumper, which was also a bit crooked probably from an earlier amateurish dent repair. Since we plan to have the car repainted back top its original blue color sometime in the near future, we decided to leave the paint temporarily as it is and focus our efforts on simpler, more practical and less expensive repairs first. 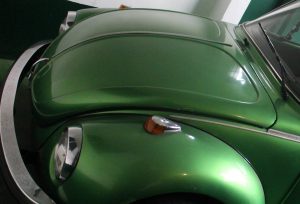 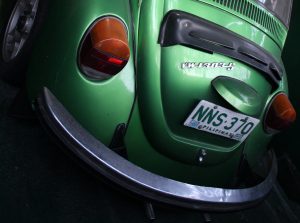 … plus the dented rear bumper and the paint peel didn’t dampen our enthusiasm for our 1303 S.

We’re not too fond of the black plastic rain deflector. We’ll remove it soon.

Inside, the torn cover of the driver’s seat bottom is the first obvious sign of our green Super Beetle’s age. The 45-year-old upper dash pad has a crack at edge near the windshield and the dash panel has been plastered with aftermarket accessories and sports emblems that were likely glued on by first owner from whom Fons bought the car from in 1982. The door cards (or sidings, as they’re more popularly known here) are faded and scratched, and are missing a few clips and has warped at the lower edge. The window riser cranks aren’t original and some plastic parts are cracked or chipped. We plan to replace these parts and change the interior color to something lighter when we restore this green Bug. 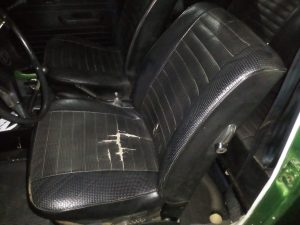 Torn cover on driver’s seat shows the age of our green Super Beetle. 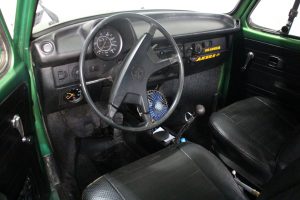 The dash was “accessorized” by the original owner including a tachometer in an awkward position. Those yellow “Los Angeles Lakers” emblems were the first to go. 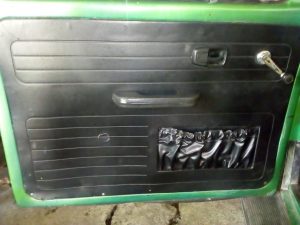 The aging door cards are fading, scratched and warped. The window cranks need to be replaced.

The good news is that the interior is relatively complete and that it held up really well. The rear bench seat just needs a little cleaning but the carpet is worn and needs to be replaced. The ceiling has a large tear but Fons gave us a brand new ceiling that he bought from JBugs, an air-cooled VW restoration specialist in the USA. The shift lever is a desirable aftermarket Hurst shifter with a wooden shift knob while the aftermarket AM/FM radio cassette player with auto reverse (!) and PLL synthesizer tuner (!) still works. The Carmate ZAX compass and thermometer are period-correct burgois car accessories that were glued on to give the impression of a technologically-busy dashboard. We personally find it just busy and cheap-looking. 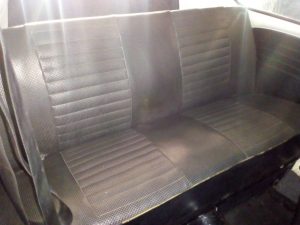 The rear bench seat of our green Super Beetle is still intact and complete. 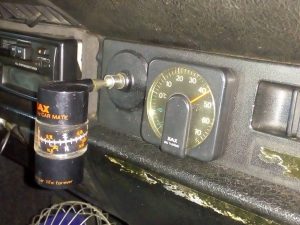 “ZAX by Carmate” compass and thermometer makes the dash look busy and cheap. 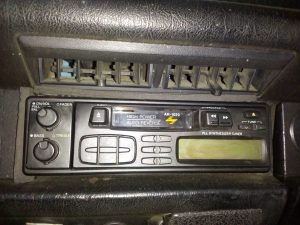 The aftermarket AM/FM cassette stereo still works with two speakers in a box behind the rear seats.

Last July 4, 2019, we wanted to use our green Super Beetle for a story for this website but when we tried to start it, we found that its old Motolite Gold 1SNF 4NS battery was flat again. Since we had not bought a new car battery yet, we used our Promate charger/electronic generator to trickle-charge the battery and provide it with just enough juice to crank the engine. Once the battery was charged, the 1.6-liter flat-four started almost immediately but it idled a bit roughly. 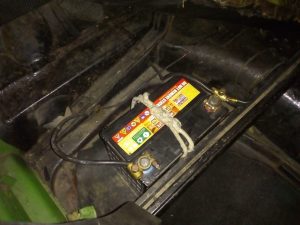 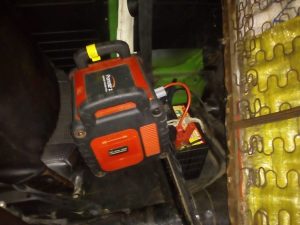 … so we used our Promate charger/electronic generator to give it some juice. 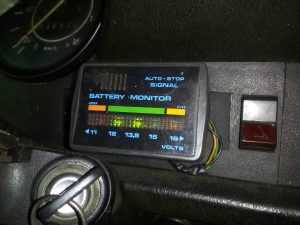 The 80’s aftermarket electronic battery monitor showed the alternator was charging up to 13.5 volts.

Once we got it running, we proceeded to take photos of our green Super Beetle along with a black 2019 Volkswagen Santana 1.4 MPI Trendline for our planned comparison story. After some time, our green Bug bugged out and stalled on us again. We checked the distributor and found that we need to perform an old-fashion engine tune-up soon. We need to replace the contact point, condenser and probably, the distributor rotor as well as the four spark plugs. We would also need to change the motor oil and filter since we’re going to perform engine maintenance anyway. We would likewise need to have the alternator checked, just to make sure that it is charging properly. 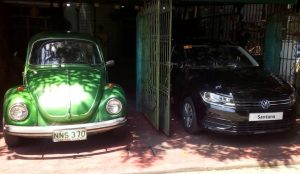 Our green Super Beetle stalled on us during our photo shoot for our comparison story. 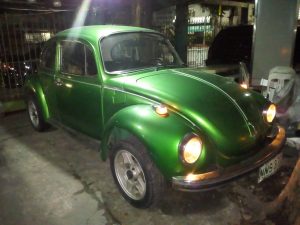 If the lights glow brighter when the engine is revved, then the charging system needs to be checked. 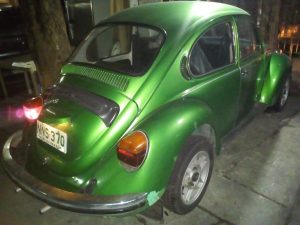 Right tail light bulb is busted but the bulbs in the turn signal indicators are all working.

As previously mentioned in Part 1 of this Project Car series, we’re planning to restore the paint of our Super Beetle to its original light blue color to commemorate the blue Beetle once owned by Habib Mahmoud Balan, the Aya (father) our VP for Sales and Marketing, Shariffa Merhattra “Shawie” Balan Dizon. We scoured the internet for photos of a blue 1974 Super Beetle just to imagine what our car will look like when we have it repainted. Thus, with almost everything assessed and planned, we can now proceed with working on our new/old Power Wheels Project Car. Watch for it soon! 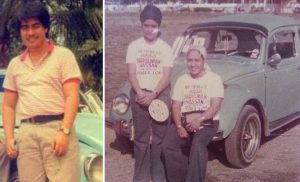 We plan to return our Super Beetle back to its original blue color in honor of Shawie’s Aya. 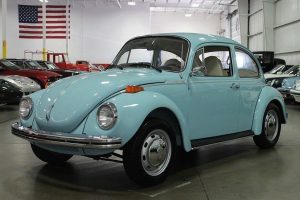 This is what our 1974 Super Beetle 1303 S would look like when repainted back to its original factory blue color. 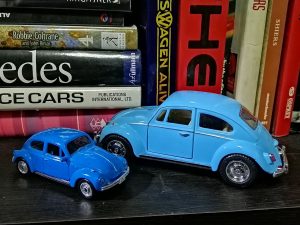 We even got two small blue Bugs to inspire us to work on our Super Beetle project car.