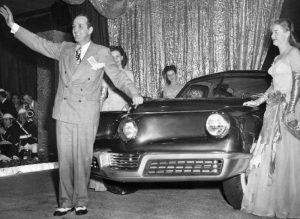 Preston Tucker and the Tucker 48

In 1948, Preston Tucker conceived and briefly produced an automobile with features so advanced that it was deemed as a big threat to the car sales and image of the Big Three American automakers at the time – General Motors, Ford Motor Company, and the Chrysler Corporation. Due to negative publicity initiated by the American news media, a Securities and Exchange Commission investigation, and a heavily publicized stock fraud trial, only fifty cars were made before the company ceased operations on March 3, 1949. The allegations against Preston Tucker and his company were proven baseless and led to a full acquittal. Speculation exists that the Big Three automakers, Michigan Senator Homer Ferguson, and media people in the payroll of the three automakers had a role in the shutting down the Tucker Corporation. 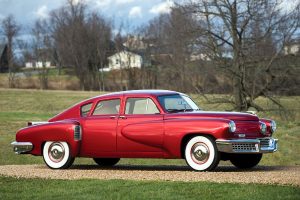 The car that Preston Tucker produced was a 4-door sedan called the Tucker 48, referring to the year of production. The car sold for nearly $4,000, which was a huge amount in those days. The car was commonly referred to as the “Tucker Torpedo” but this name was never used in conjunction with the actual production car. The first Tucker produced was a prototype sedan, known as the “Tin Goose”. Fifty-eight frames and bodies were built at the factory and were numbered #1001 to #1058. From these parts, 36 sedans were finished before the factory was closed in March 1949. 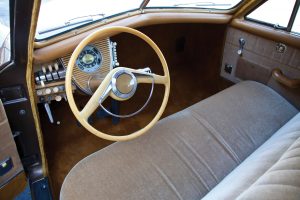 Interior of the Tucker 48

After the factory closed, but before liquidation of his assets, Tucker retained a core of employees who assembled an additional 14 sedans, for a total of 50. A 51st car was partially completed. A few of the remaining frames and bodies were built into complete cars specifically #1052 and #1057, which was supposedly the 1949 prototype with design changes. The fate of other Tuckers is unknown. 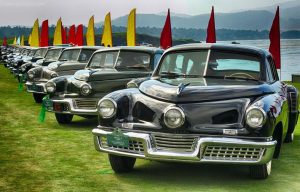 Only 50 Tucker 48 sedans were produced by the Tucker Corporation.

Tucker #1057 was the prototype being worked on by designer Alex Tremulis for the 1949 model year. It was one of eight incomplete body shells, believed to be #1051-1058, left on the assembly line at the time the Tucker plant was closed. Photos from the factory show #1057 was being built with a “wrap-around rear window” as one of the design changes for 1949. But #1057 was later converted to a convertible, and whether the conversion occurred at the factory or later is unknown. 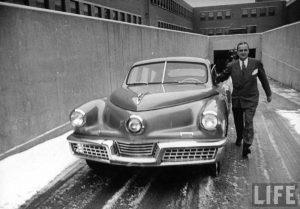 Designer Alex Tremulis posed for LIFE Magazine with a Tucker 48.

In the early 1950s, a fairgrounds owner from Fort Lauderdale, Florida, Nick Jenin, purchased over ten Tuckers, including the original Tucker test bed chassis, numerous Tucker parts, photos and documents. He developed a traveling display called “The Fabulous Tuckers” and hauled the cars and memorabilia around the country for nearly 10 years, displaying them at fairgrounds and car shows. His display highlighted the questionable policies and SEC fraud investigation which brought Tucker down. 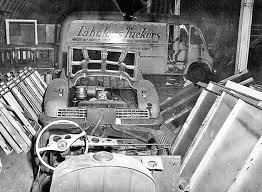 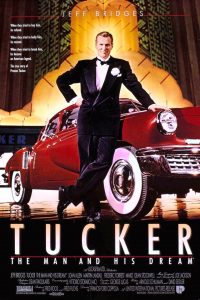 Jeff Bridges starred in the Francis Ford Coppola film “Tucker: The Man and His Dream”

In June 29, 2019, Tucker #1057 was again offered for sale at eBay as “The One and Only 1948 Tucker Convertible”. The seller claimed that it was the factory convertible prototype that started life as a sedan and had its roof cut off. The frame apparently sagged and prompted the engineers to strengthen the chassis. An employee of Lenki Engineering, who was contracted to produce the convertible in 1949, purchased the car with the intention to complete it but never did. He sold it to another individual who also didn’t complete it. The car was eventually completed in 2010 by Benchmark Classics in Madison, Wisconsin, USA. 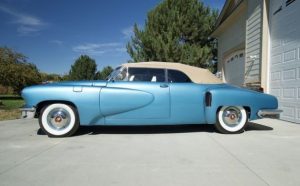 Tucker #1057 had its roof cut off, its rear doors welded, and its chassis beefed up… 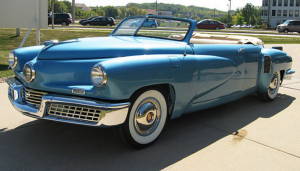 … to make a stunning 1948 Tucker convertible, the only one of its kind.

Its odometer shows that Tucker #1057 traveled only 10 miles (16 kilometers) and was titled to only one owner since it was completed as a convertible. It had all the features incorporated into all Tucker 48s, which would not appear on other cars until some years later, included a center swiveling headlight, safety windshield, quick sway powertrain, disc brakes, fuel injection, seat belts, and padded dash. 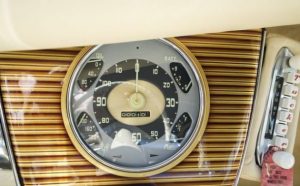 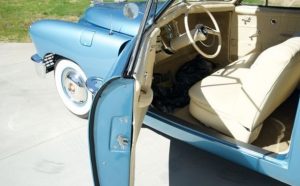 … even though the Tucker convertible was finished in 2010.

The engine used in the Tucker 48 was a rear-mounted Franklin O-335 flat-six aircraft engine made by Air-Cooled Motors, which like a Porsche engine, has six horizontally-opposed cylinders. The engine, which was made for helicopters, gave the Tucker a lower center of gravity and enabled it to go around corners and winding roads easily. With 166 horsepower, it was capable of bringing the Tucker 48 from zero to 60 mph (100 km/h) in 7 seconds, surpassing even some modern cars. 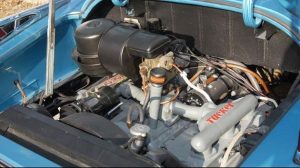 Flat-six Franklin aircraft engine pushed the Tucker from 0 to 100 km/h in just 7 seconds.

Thus, for a little over $3.5 million (or P182M at the current exchange rate of P52:$1), you can have an extremely rare, low-mileage 1948 Tucker convertible with an unmatched history and provenance. And it comes with a guaranty that it’s the only one in the whole wide world. 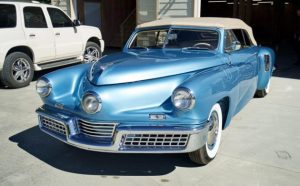