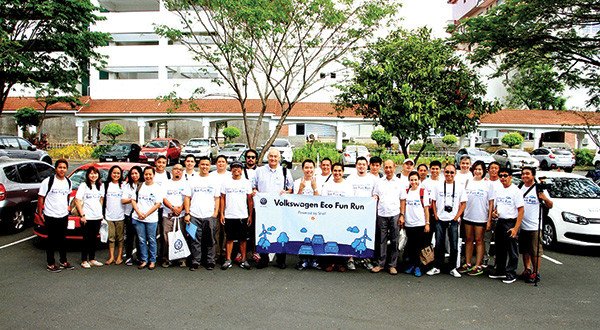 After three successful Fuel Eco Fun Runs, VW Philippines held a championship round pitting all the winners of the previous legs against each other. To make things challenging, they were asigned different vehicles from their last runs.

Held last May 19th, they started off from the Shell station on the SLEX. The Polo Sedan 1.6 TDI (MT), Polo Hatchback 1.6 MPI (AT), and, Tiguan 2.0 TDI (AT) went on their way through normal traffic conditions with air condition units turned on, following standard traffic rules and normal road circumstances.

The 139.9 kilometer trip took the teams the entire stretch of STAR tollway then looped back to SLEX (Eton Exit) before finally reaching Shell station in Nuvali, Sta. Rosa City for the fuel efficiency measurements which were duly witnessed by Department of Energy Officer Joan Sotelo.

Winners were announced by VW President and CEO John Philip Orbeta, as follows:

The winners of the “Battle of Champions” received the prizes from Orbeta and Shell Companies in the Philippines Country Chairman Edgar Chua.