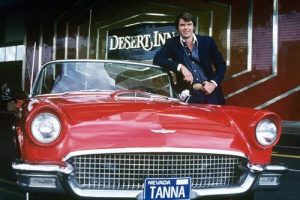 When I was a young teen, one of my favorite TV shows was “VEGA$”, an American private detective crime drama series that aired on Philippines television around the late ‘70s and early ‘80s. The TV series stars Robert Urich as private detective Dan Tanna, who drove to his cases around Las Vegas, Nevada in a red 1957 Ford Thunderbird convertible. His residence was a converted props warehouse for one of the casinos where he can park his car inside a groovy living room. 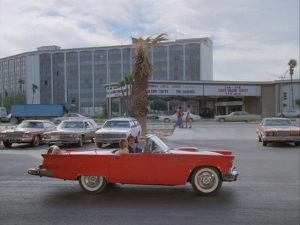 As an impressionable young man, I liked the idea of driving around in a red classic convertible and then parking it inside a fancy apartment. For me, a place like that would be the ideal bachelor’s pad and the two-seat Thunderbird would be an ideal bachelor’s car. 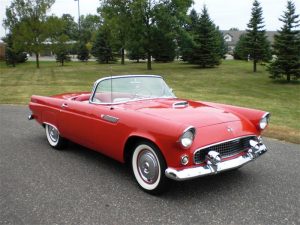 As I grew older, my dream to live (and drive) like Dan Tanna faded into oblivion as fancier TV shows with fancier sports cars, like Magnum P.I. and Miami Vice captured my imagination. But the TV show’s red T-Bird left an indelible impression with me well into adulthood. Thus, when I saw a red T-Bird model car for sale, I did not hesitate in grabbing one. 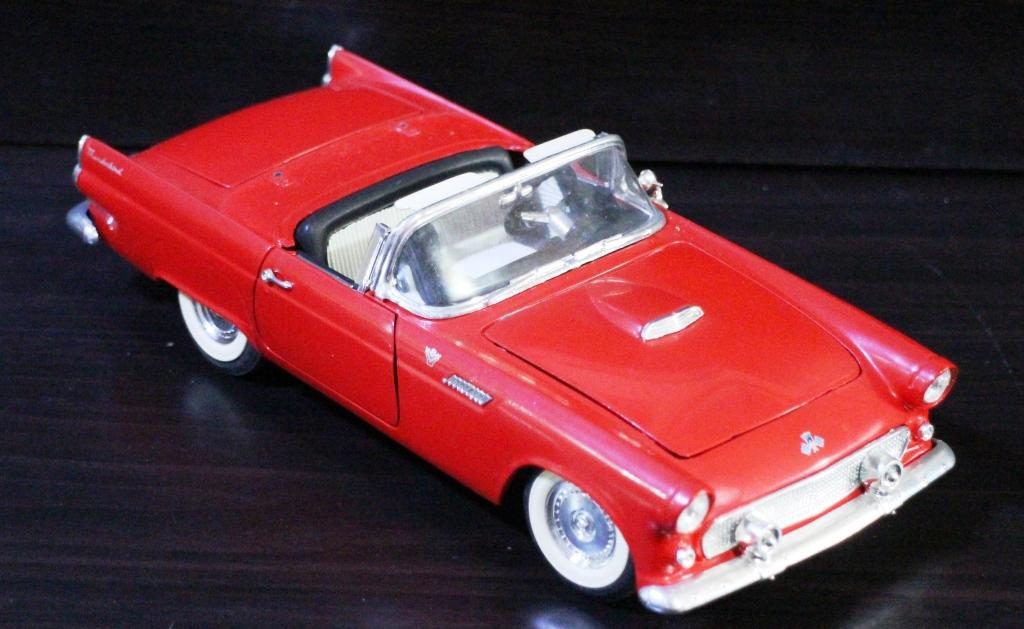 My 1955 Ford Thunderbird convertible is a Yat Ming Road Legends 1:18 scale die-cast model car with a removable hardtop. The convertible was finished in Torch Red, which was one of the three colors, along with Raven Black and Thunderbird Blue that were initially available when the actual Thunderbird was introduced in October 1954. 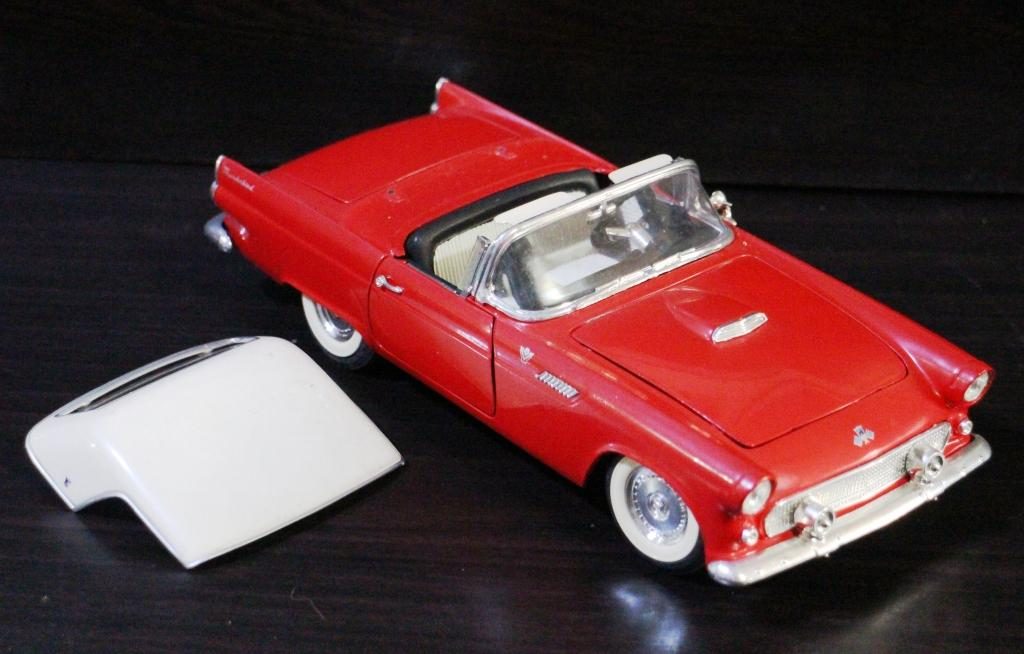 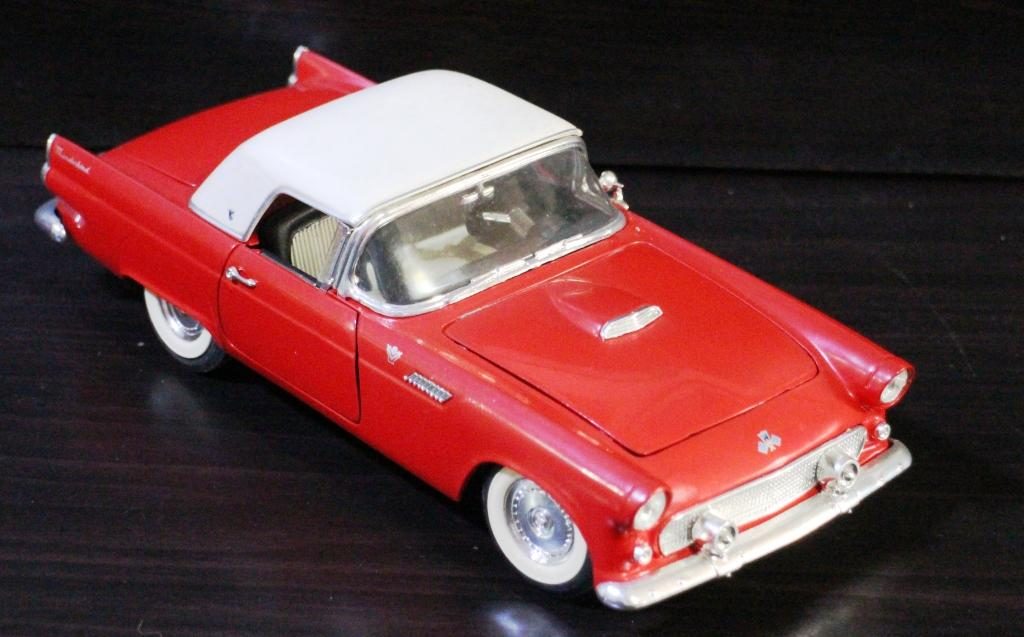 According to Ford Motor Company archives, the removable hardtop of 1955 T-Birds were finished in the same color as the body and it was implied that hardtops finished in a different color, like the Snowshoe White of our model car’s, was repainted by the dealers before delivery. 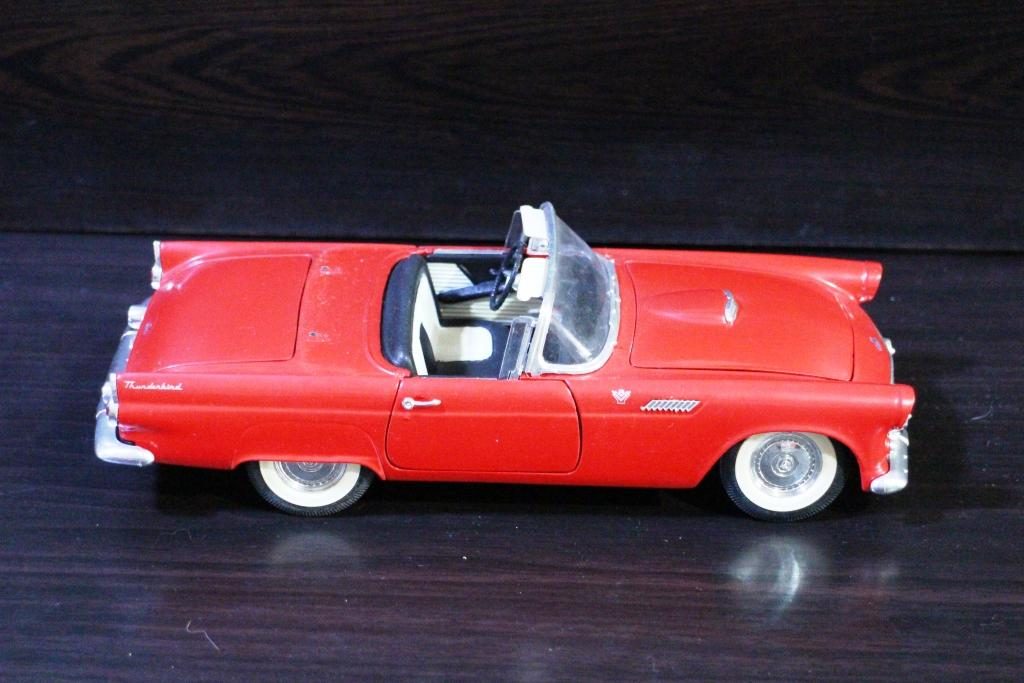 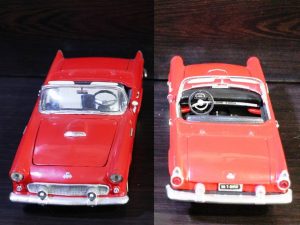 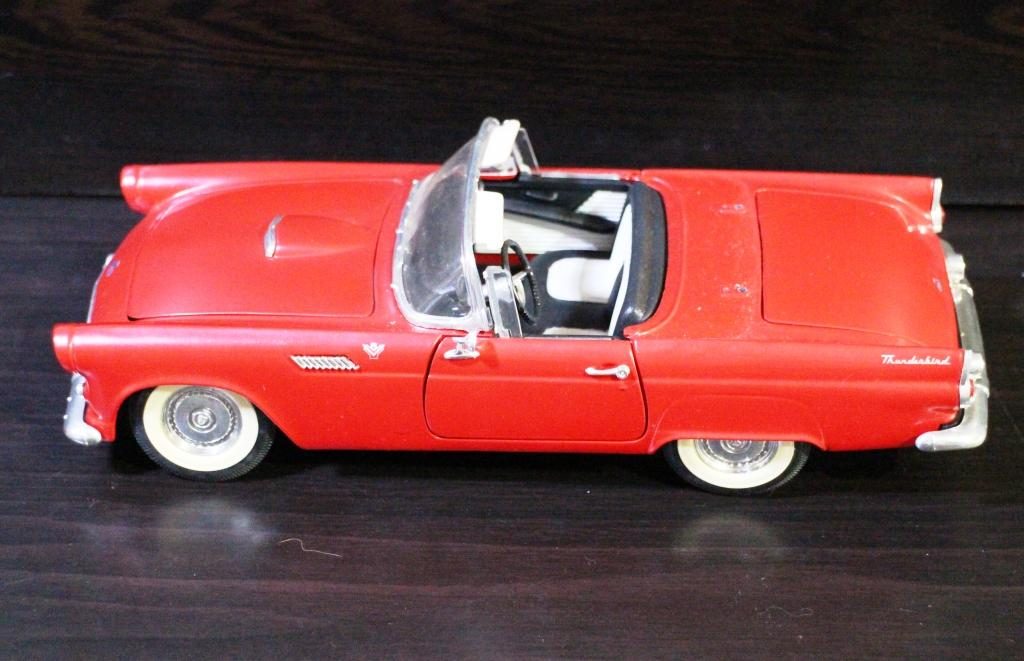 If I were to recreate a same-scale diorama of Dan Tanna’s pad, it would occupy a huge space because our T-Bird measures around nine and a half inches long and around four inches wide. The hood opens to reveal a detailed engine compartment with the 202-horsepower 292-cid Y-Block Ford V8 while the trunk opens to an expanse of gray plastic. (The tire in the photo came from my 1:18 scale 1953 Ford pickup model and it was used just to hold the trunk lid up.) 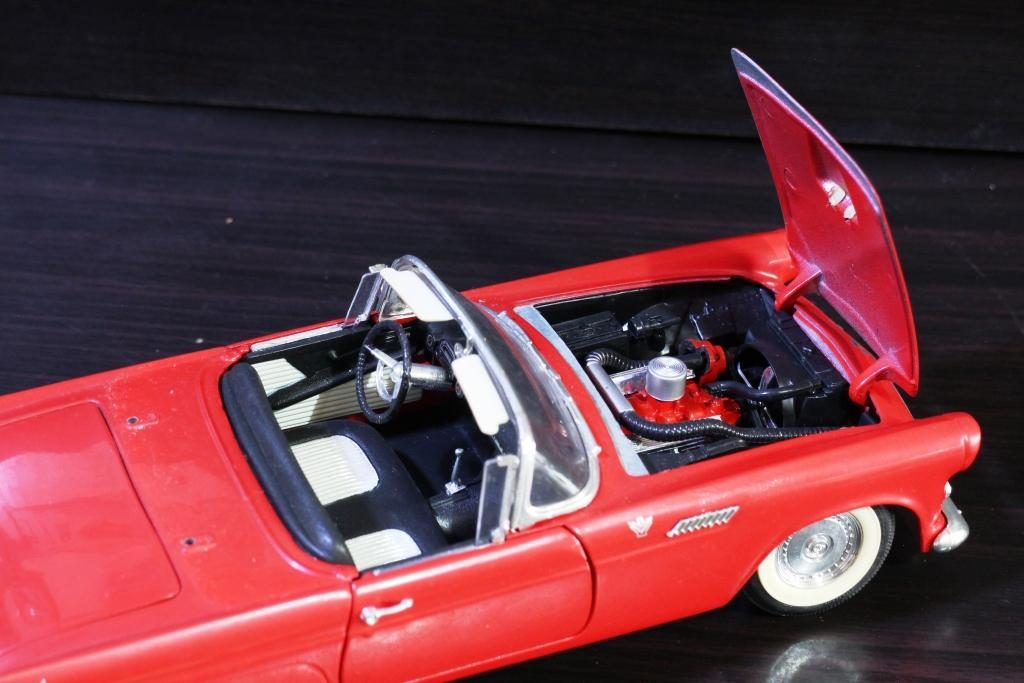 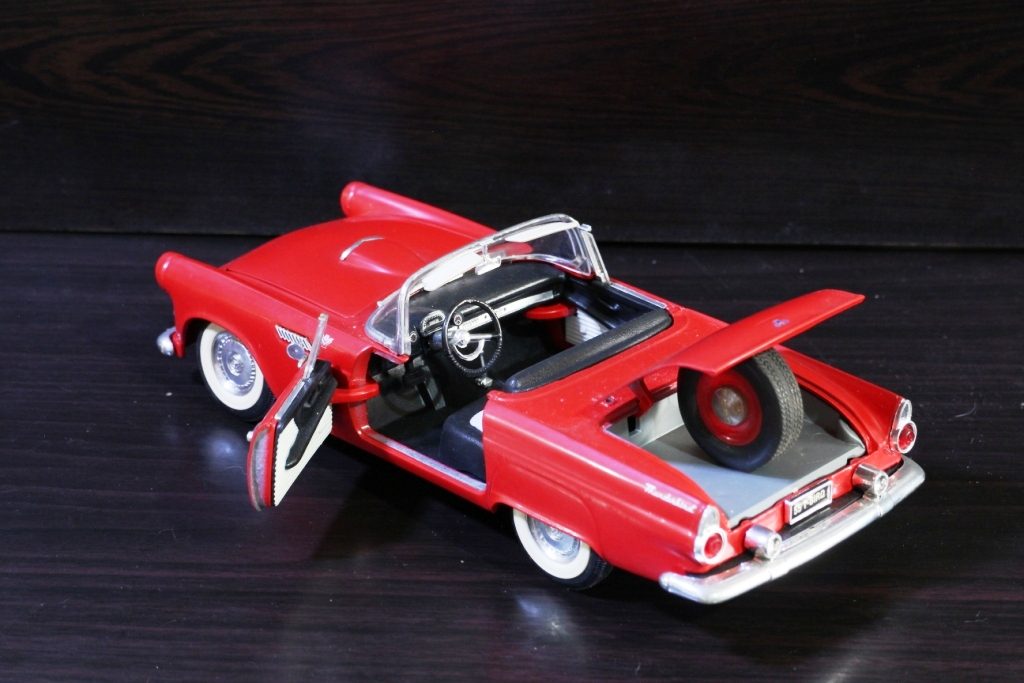 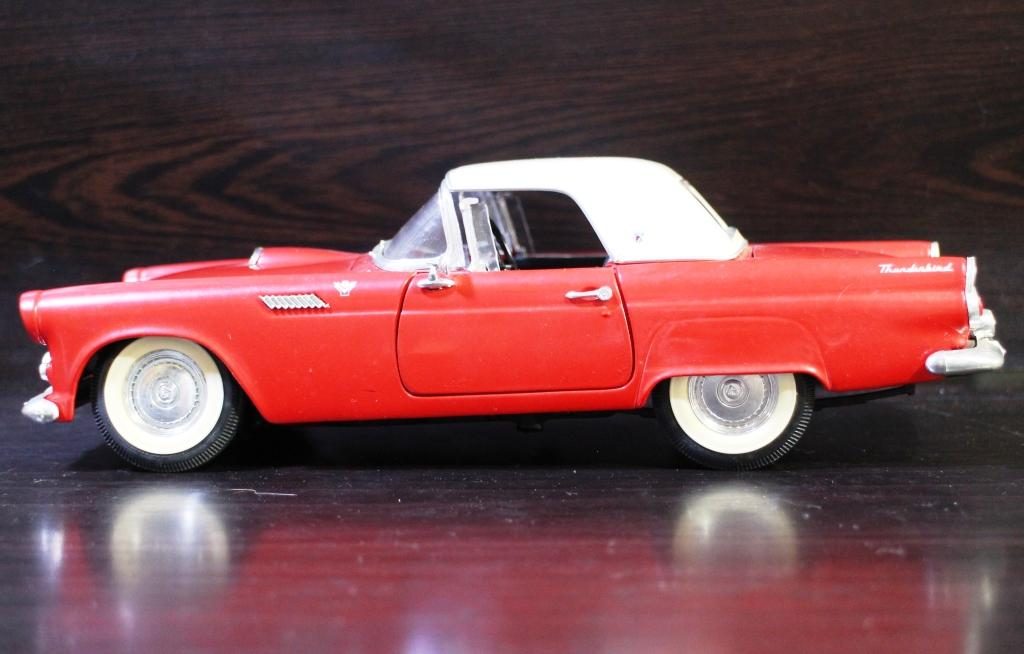 The doors open to a detailed two-seat interior complete with the two-tone black-and-white seats, floor-mounted shifter, and the authentic-looking steering wheel that actually turns the front wheels. The wheels feature the chrome Thunderbird hubcaps and white sidewall tires. 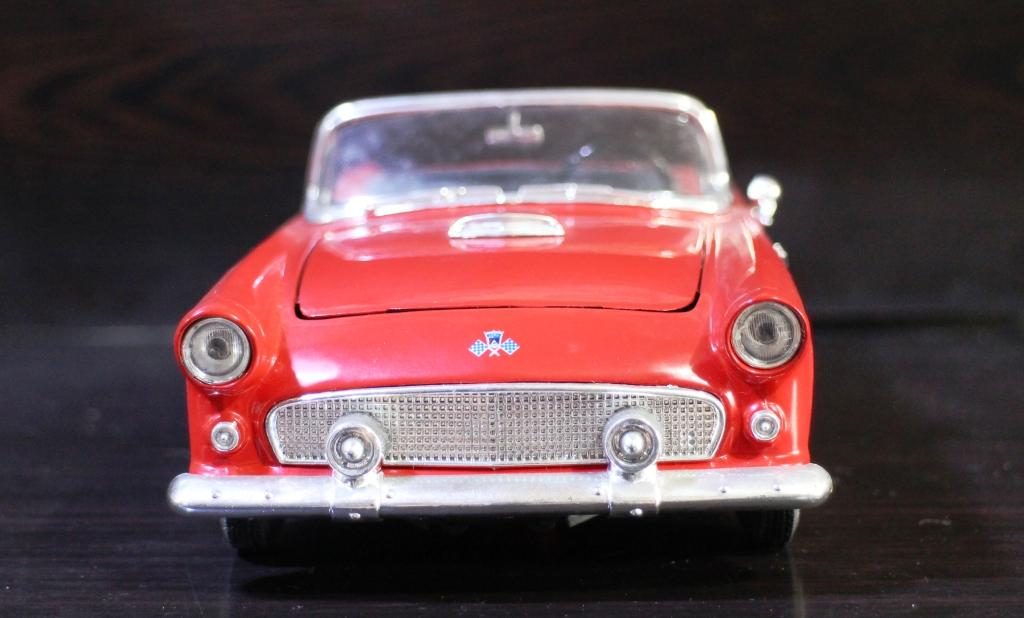 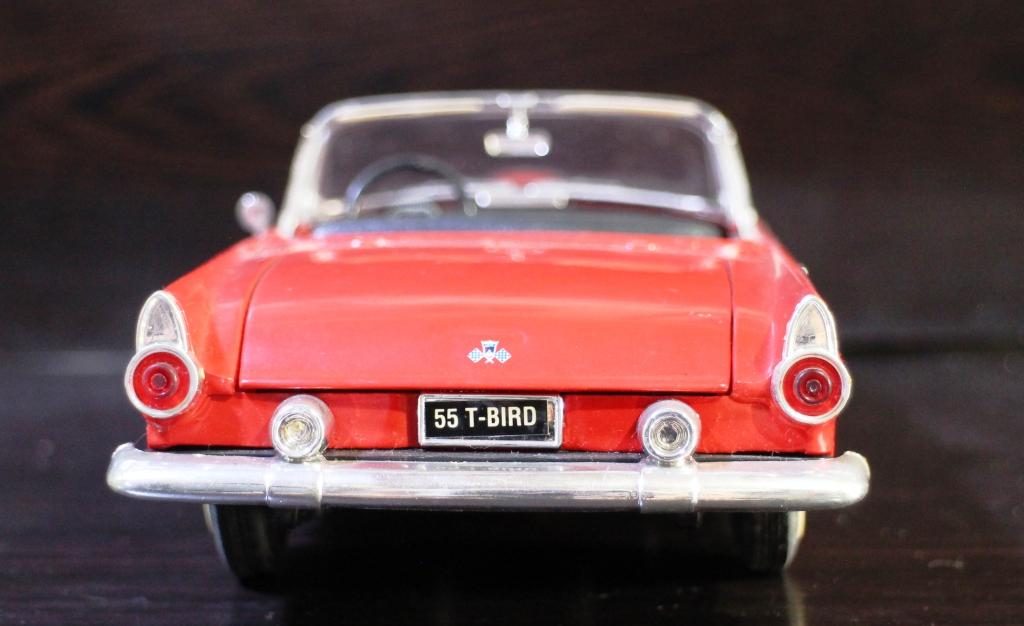 Overall, this Yat Ming 1:18 Thunderbird presents itself quite well. I may not have fulfilled my dream to live (and drive) like Dan Tanna, but there are days, like where I can line up some of my model cars along with the Thunderbird, when I feel like I won the jackpot in Las Vega$,even when I didn’t shell out lots of dollar$$$! 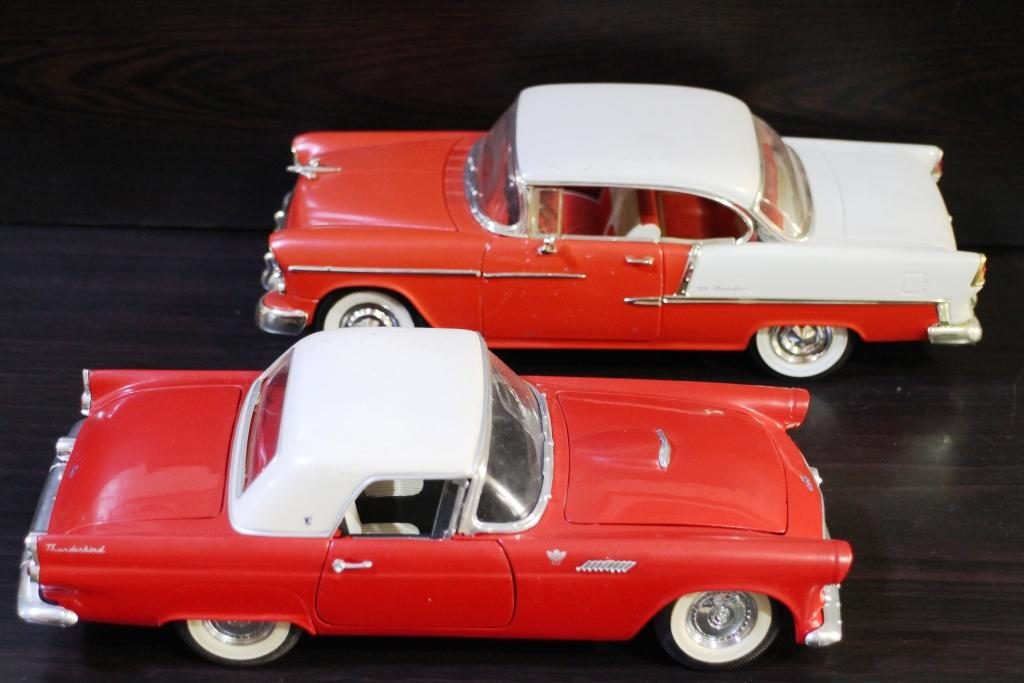 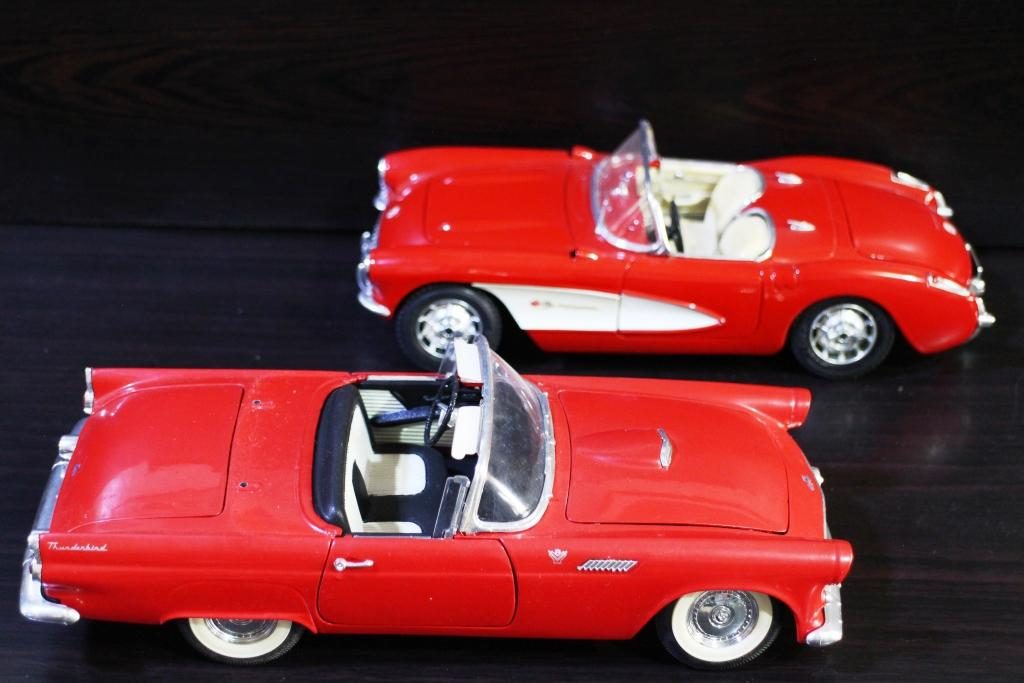 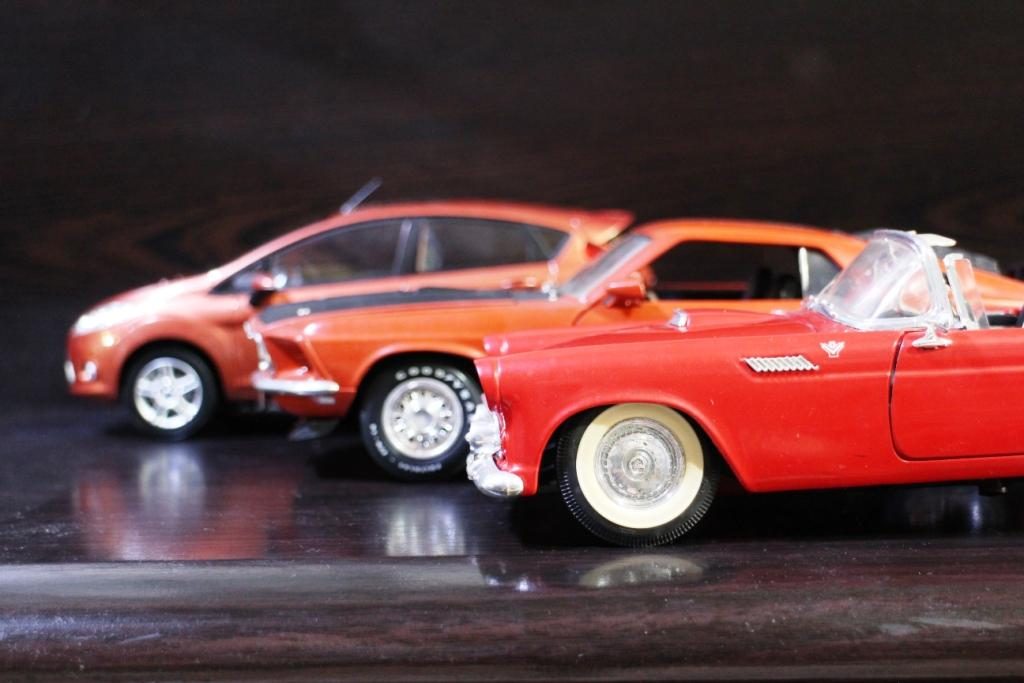 To see other scale model cars and motorcycles that we have previously posted here in the Power Wheels website, please click “The Rack” button on the header bar near the top right of your screen (if you’re using a PC, laptop or tablet), or type “The Rack” on the Search bar (if you’re using a mobile phone). The Modified Enhanced Community Quarantine (M-ECQ) currently being implemented by the government means that you can go back to work or re-start your business, but we implore you, our dear readers, to stay safe and stay home when you have nothing important to do outside. But if you really have to go out, protect yourself with a face mask, face shield and keep your distance. Help flatten the curve of the infection rate and help avert a second wave of infection by doing your part. Together, we can beat COVID-19! 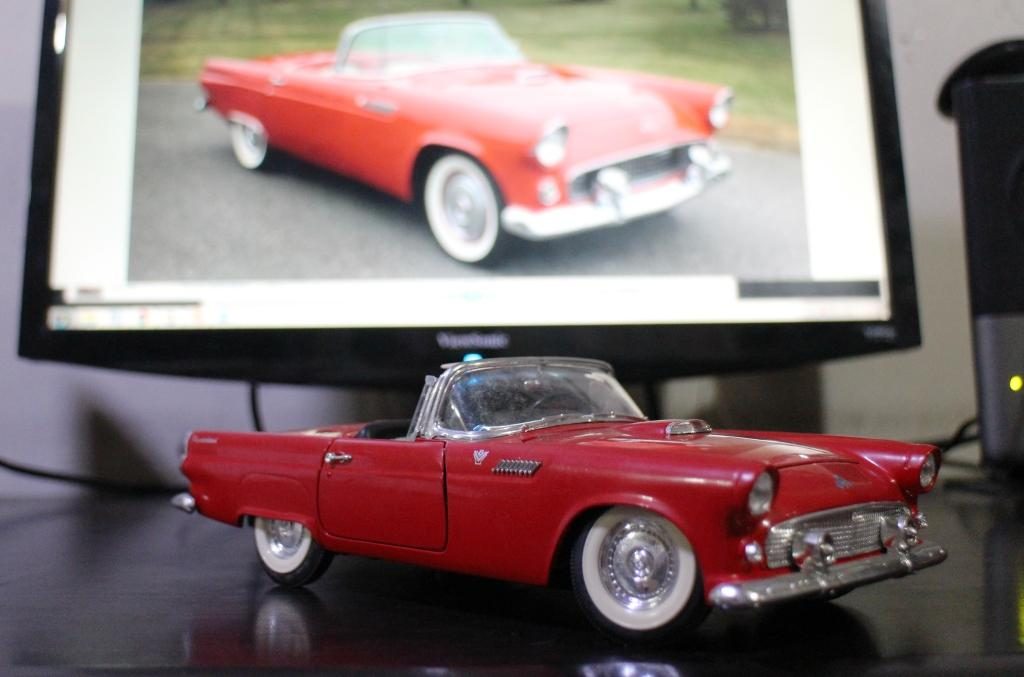