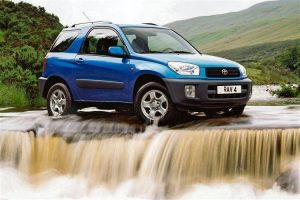 It’s hard to believe that the Toyota RAV4 has been around for a quarter of a century already. It debuted in 1994 as the first compact crossover sport utility vehicle (SUV) and its name was an amalgamation meaning “Recreational Activity Vehicle 4WD”. Toyota Motor Corporation created the RAV4 in response to their customers’ demands for a vehicle that had the benefits of an SUV such as increased cargo room, higher visibility, and the option of four-wheel drive (4WD), along with the benefits of a compact car, such as maneuverability, ease of parking, and fuel economy. It is rather ironic that the latest iteration of the RAV4 currently does not offer the 4WD option. 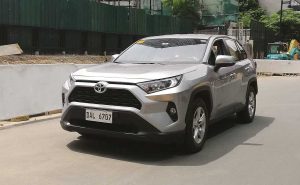 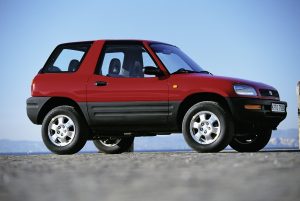 Launched in Japan in May 1994, the first generation RAV4, known as the XA10 series, shared a unique platform derived from the Toyota Carina and Corolla. Design and development started in 1989 under code name 153T, with design approval and start of production development in the second half of 1991 on the 3-door version and in 1993 for the 5-door version. Powered by a 119-horsepower 2.0-liter inline 4-cylinder, the RAV4 was available in 3-door or 5-door versions, front-wheel drive or all-wheel drive, and 5-speed manual or 4-speed automatic transmission. It was named the 1997 Automobile of the Year by Automobile Magazine. It received a slight front and rear restyling in 1998. 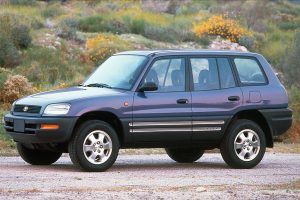 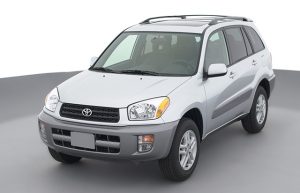 The second generation XA20 series RAV4 went on sale in July 2000. Like the previous model, it was available in 3-door and 5-door versions and was constructed on a platform that was shared with the Toyota Carina and Corolla. Development began in 1995 and approved in the first half of 1998. Styling was done at Calty Design Research Incorporated by Yasuhide Hosoda and Kevin Hunter from 1996 to 1997. Powerplant choices include a 150-hp 2.0-liter inline-four gas engine, a 158-hp 2.4-liter, or a D-4D inline-four diesel engine. The RAV4 underwent a minor styling update and improved equipment in 2004 while 2.4-liter engine made 160 horses and the 2.0-liter got intelligent variable valve timing (VVT-i). 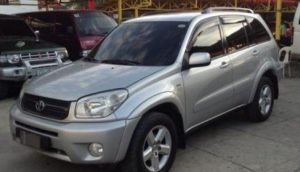 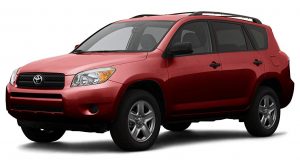 Redesigned for 2006 using an all-new platform and Electric Power Steering System (EPS), the third generation RAV4 was unveiled at the 2005 Frankfurt Motor Show. Offered in two versions, the short-wheelbase or standard RAV4 was sold in Japan, Europe and New Zealand while the long-wheelbase or extended RAV4, which was 21% longer, was sold in Australia, New Zealand and North America. The 3-door version was dropped in 2007 and the XA30 series RAV4 was given a mid-cycle styling update in 2009. 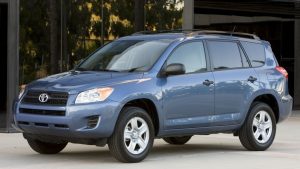 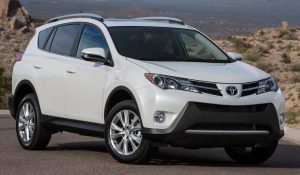 With a complete redesign, the fourth generation RAV4 was revealed at the 2012 Los Angeles Auto Show. Engine choices included a 2.0-liter and 2.5-liter Dual VVT-i four-cylinder gasoline engines or 2.0-liter and 2.2-liter turbo diesels while transmission choices included a 6-speed manual, a 6-speed automatic or a Continuously Variable Transmission (CVT). Unlike the dual wheelbase availability of the previous XA30 model, the XA40 was only sold in a single wheelbase configuration. It also featured a more traditional tailgate that opens upward instead of the side-opening tailgate of the previous generations. In 2016, it received a facelift that debuted with the RAV4 Hybrid, which combines a 2.5-liter Atkinson cycle gasoline engine with an electric motor and nickel-metal hydride battery cell. 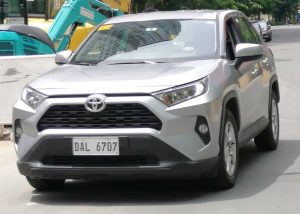 Unveiled in March 2018 at the New York International Auto Show, the fifth generation RAV4 was designed by Tatsuya Sonoda and is based on the Toyota New Global Architecture (TNGA-K) platform, which is shared with the eighth generation Camry, fifth generation Avalon and seventh generation Lexus ES. Both 4-cylinder gasoline-powered and gasoline-electric hybrid (Hybrid Synergy Drive) RAV4 variants are available but because it’s based on the front-wheel-drive TNGA-K platform, there is currently no available 4WD option. Off-road enthusiasts felt that this deletion deviates from the original concept of “4WD recreational activity vehicle” but we can only wager a guess that most RAV4 owners drive around urban areas more often that they venture off-road. 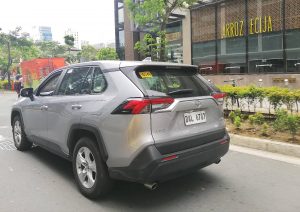 Our narrative on the 25-year history of the Toyota RAV4 was brought about by our recent test drive of  the latest XA50, a 2.5-liter LE 4×2 A/T base model variant. Even though our subject car is a base model, this new Toyota crossover SUV looks upmarket, albeit tough and mean, with the headlights mounted high at the edges of the front portion of the fenders and the large grille, which looks like an inverted smile or a thick mustache, dominating the RAV4’s face. Add a pair of large angry cartoon eyes on the windshield, and our test drive unit will look like an unsmiling silver SUV with a goatee, worthy of a cameo in the next “Cars” Pixar movie franchise. 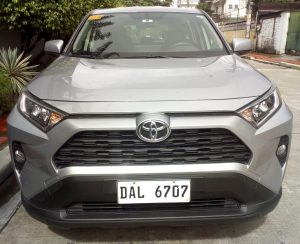 Angular lines and edges dominate the sides to create an illusion of having a larger body than the previous generation. In reality, the new RAV4 is 10 millimeters shorter than the previous one (4,595 versus 4,605 mm) but 10 mm wider (1,855 versus 1,845 mm).  The big black plastic accent pieces on the wheel arches, lower rocker panels and around the windows add to the futuristic and edgy look but the longer overhang at the front and rear may be one of the reasons why Toyota has decided to keep this RAV4 off the 4×4 trails. After all, long overhangs means lower approach and departure angles, which is a big no-no in off-roading. 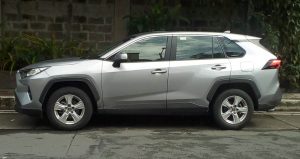 A funny thing happened on our way to an event. We had the RAV4 valet-parked and the car jockey immediately listed it as “Toyota Innova” on the valet parking ticket. He went around the vehicle for the routine inspection before parking it and then ran after us to correct the writing on the ticket when he saw the “RAV4” emblem at the back. We guess that he assumed it was the Toyota MPV because of the RAV4’s longer body and because it really does look like the Innova with the square back and high tail lamp cluster. Like their upmarket Lexus brand, Toyota has been designing their vehicles to have a familial look to enhance brand recall. Thus, you can immediately tell it’s a Toyota but it’ll take a while to figure out what model if you’re not well-versed with their line-up. 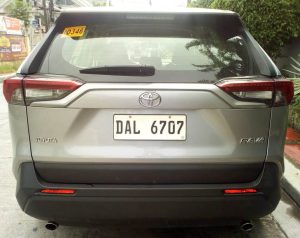 Opening the rear tailgate shows the “activity” portion of the RAV4’s name. In the past, only bulky station wagons and large SUVs have enough space at the back to haul mountain bikes, long boards, climbing equipment, or other fun activity gear but the RAV4’s introduction in 1994 changed all that. It was designed to be a fun recreational vehicle that you can drive to your activity, or at least close to it. The fifth generation RAV4 may not have the all-wheel drive capability of the previous iterations to allow it off the beaten path, but it can still haul fun gear with the rear seat back engaged, and more stuff with the seat back folded down. With a 60:40 split, the cargo hold can be configured to haul long stuff, bulky stuff or carry stuff with space for a rear passenger. 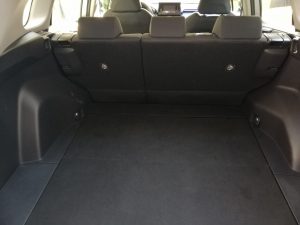 … or carry long items with a family member or friend in the back seat.

Sitting for hours in heavy traffic while driving around the metropolis is not something one can call a “recreational activity” by any means, but it doesn’t mean you can’t be comfortable. The interior of the RAV4 is a nice place to while way the time when you’re stuck in traffic with comfortable seats, breathable fabric upholstery, cold air-conditioning system, and infotainment system. As a “base” model, our silver RAV4 2.5 LE is not equipped with luxury amenities such as leather seats, sunroof or reverse camera, but we do not miss them. In heavy traffic during a hot summer day, the interior of our RAV4 is very cool and comfortable while the six speakers provide rich sound quality throughout the drive, or rather, the crawl through the main roads. The infotainment system can connect with an iOS or Android device through Bluetooth as well as USB to have hours and hours of music. It can also connect with two mobile phones simultaneously via Bluetooth so you won’t get cited for “Distracted Driving” when you make or take calls while you’re crawling safely through traffic. 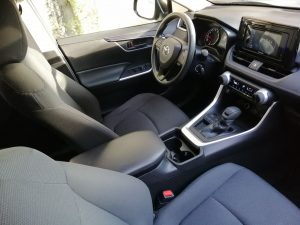 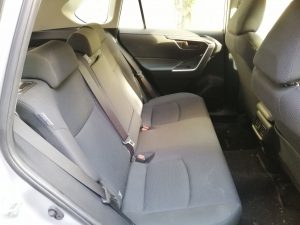 … for all passengers, even at the back seat.

The RAV4’s TNGA-K platform features a wheelbase that’s 30mm longer than the previous model (4,690 versus 4,660 mm), which helps minimize the transmission of the road undulations to the chassis. Combined with the 10 mm wider track (1,855 versus 1,845 mm), rear double wishbone suspension, and meatier 225/65R17 tires, the RAV4 provide a more stable, comfortable and composed ride with a new level of smoothness. Added safety features such as seven airbags, front and rear disc brakes with anti-lock braking system (ABS), stability control and hill start assist further accentuates our “cocoon” analogy. 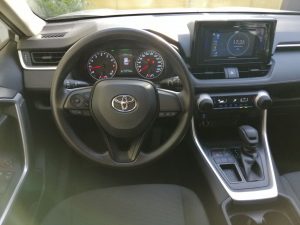 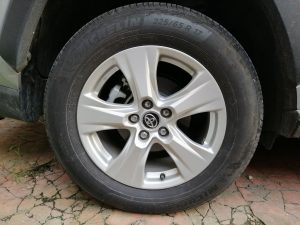 A new A25A-FKS 2.5-liter inline-four with double overhead camshafts (DOHC), sixteen valves (16V) and dual variable valve timing (VVT-i) provides our RAV4 with 200 horsepower and 243 Newton-meters of torque for smooth effortless acceleration. Power is channeled through an 8-speed automatic transmission before being delivered to the front wheels. With more power and better handling, the RAV4 feels a lot smoother and more responsive than before. Fuel economy is also enhanced with the new powerplant and our in-city traffic-snarled driving averaged 8.5 kilometers per liter, which took us by surprise since previous RAV4 generations weren’t exactly known for economical fuel consumption. 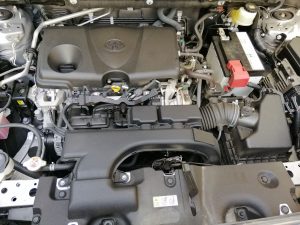 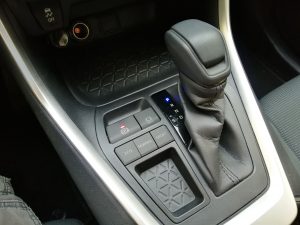 … rowed by this stubby gear lever connected to an 8-speed automatic transmission.

At 1.638 Million Pesos, the 2019 Toyota RAV4 2.5 LE cannot be immediately considered as a “bargain” base model but with all those evolutionary improvements in safety, performance, comfort and fuel economy, we can say that it is worth every centavo. It may have strayed a little from its original concept as a “recreational activity vehicle 4WD” because of the lack of 4WD, but, after 25 years, we feel that the Toyota RAV4 has evolved into one of the most Reasonable All-around Vehicles on 4 wheels. 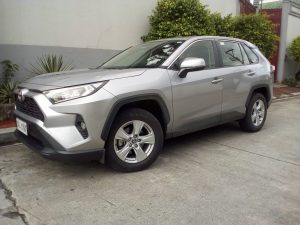 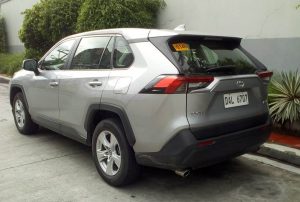