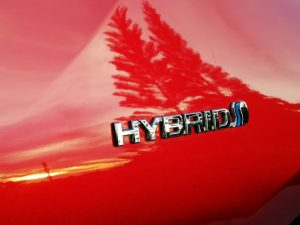 Here’s a fun fact: “Prius” is a Latin word meaning “first”, “original”, “superior” or “to go before”, which is quite apt because the Toyota Motor Corporation was the “first” major car manufacturer to offer a mass-production hybrid electric vehicle (HEV). The “original” body style of the first-generation Toyota Prius (NHW10), which was introduced in 1997, was a 4-door sedan, while the succeeding generations – XW20 (2003-2009), XW30 (2009-2015) and XW40 (2015-present) – were all produced with a 5-door liftback body style. It also uses an all-electric scroll compressor for the climate control system, which is another industry “first”. 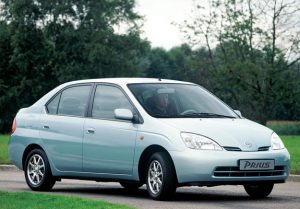 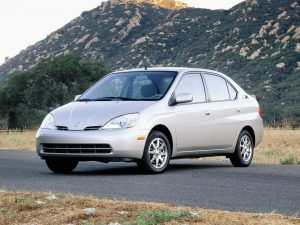 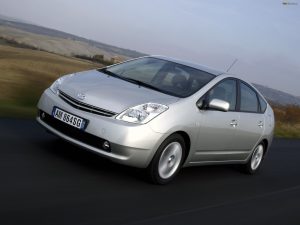 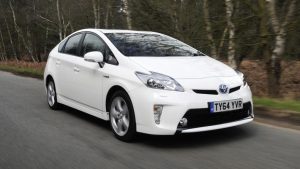 The Prius showed its “superior” side when it won the Car of the Year Japan award twice in 1997 and 2009, the Automotive Researchers’ and Journalists’ Conference Car of the Year award in 1998, and the Consumer Reports’ “Best Value” award in 2013.  Sold in over 90 markets around the globe, the Prius is the world’s top-selling hybrid with more than 4 million units sold since its debut. It is also rated by the United States Environmental Protection Agency (EPA) and California Air Resources Board (CARB) as among the cleanest vehicles sold in America and as the second most fuel-efficient gasoline-powered car without plug-in capability. Despite these many firsts and numerous awards, why is this HEV not generally well-accepted by the Filipino motoring public? We borrowed a current model Prius XW40 from Toyota Motor Philippines (TMP) to find out why. 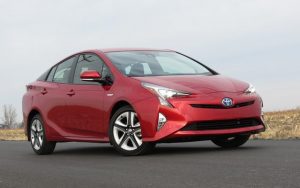 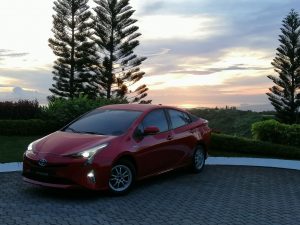 The slow sales of the Prius can be blamed on two factors – high prices and unsubstantiated myths. In the Philippines, the high price of the Prius is caused by high tariff and custom duties imposed on it and the lack of government incentives to own and operate an HEV with ultra low emission ratings. At P2.2 Million, the Prius is simply priced beyond the range of most compact sedan buyers. Pundits will argue that it’s better to buy a gasoline- or diesel-powered compact sedan or SUV between P1.2M and P1.5M, and use the difference to buy fuel for the next four to five years. 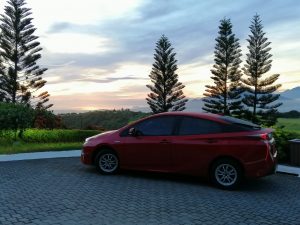 Because of taxes and lack of government incentives, the Prius is too expensive for most Filipinos.

Then, there are those unbelievable housewives’ tales: The supposed electromagnetic interference (EMI) generated by the electricity traveling between the hybrid’s battery array at the back and the electric motor at the front can cause a pacemaker to short out, killing the person wearing the heartbeat-assistance device; supposedly, occupants can be electrocuted when the car passes through flood waters; and there’s no mechanic who can repair an HEV if it stalls on Philippine roads. Of course, all of these myths have been debunked, especially with more than 4 Million Toyota Prius owners worldwide… with no pacemaker outages or electrocuted passengers reported. Some police forces around the world even uses the Prius as patrol cars. 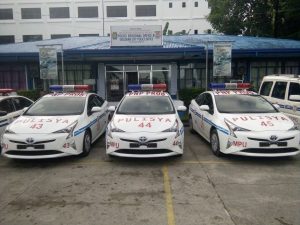 Driving a Toyota Prius Hybrid is just like driving any other compact sedan. The only difference is that the Prius uses its electric motor for low speed operation so it’s really, really quiet. So much so, that you’ll find yourself checking if the ignition is on… uh, if the car is ready to go. The small shifter is like a big toggle switch that electronically shifts the continuously variable transmission (CVT) from neutral (N) to drive (D) or reverse (R). Park (P) is engaged by pushing a button and is automatically disengaged when you shift from N to D or R. There are three optional user-selectable driving modes – Normal mode for ordinary driving operation, Eco mode for best fuel efficiency, and Power mode for better performance. 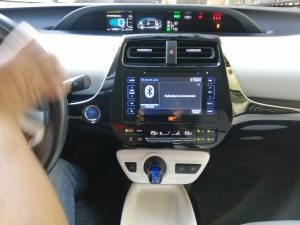 The short shifter is like a big toggle switch… 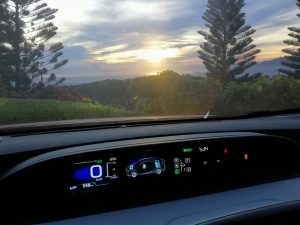 … the shift pattern and gear position is displayed on the instrument panel.

In traffic and city speeds, the Prius uses the 71-horsepower 163-Newton-meter electric motor for propulsion as long the batteries are sufficiently charged. Once the battery power is low, the 95-horsepower 1.8-liter Atkinson-cycle 4-cylinder gasoline engine will automatically start. At low speeds, the engine will just charge the batteries but at faster paces, it will also be used to propel the car. At high speeds, the electric motor and the gas engine combine to give the car 121 horsepower at 5,200 rpm, which may not look like much, but given the seamless manner with which the engine engages plus the torque of the electric motor and the smooth CVT shifts, the Prius feels quick enough to pass most cars on the road. 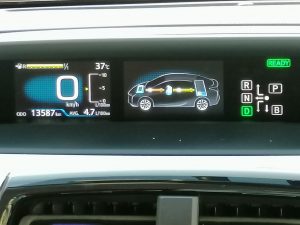 Gas engine is activated to charge the batteries when the charge is low. 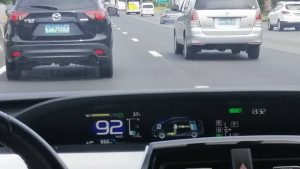 With fully charged batteries, the electric motor alone can propel the Prius to highway speeds. 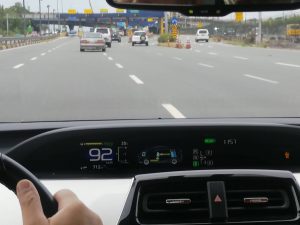 Regenerative braking charges the batteries when you let off the gas or step on the brakes.

Our Prius Hybrid test drive unit is a 2016 model and is bolder and more daring than its predecessors. It rides on the Toyota New Generation Architecture (TNGA) platform that extensively uses lighter high-strength steel while the suspension includes a double wishbone rear end that replaced the old torsion-beam setup. These features improve the Prius’ handling and ride comfort, and increase the interior space to fit five occupants comfortably. 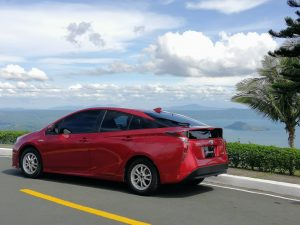 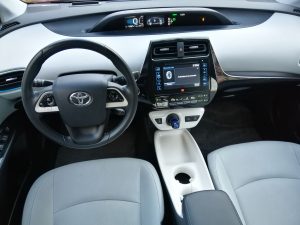 Beam me up, Scotty! The front cabin is neat, tidy and modern… 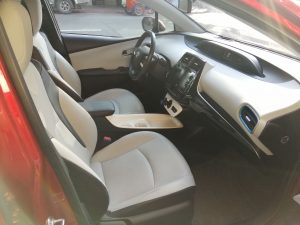 … the front seats are supportive and comfortably bolstered… 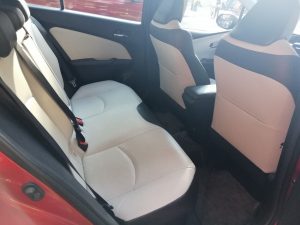 … the rear bench seats five with ample hip- and legroom… 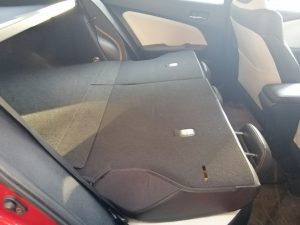 … and the seat backs fold to accommodate cargo. 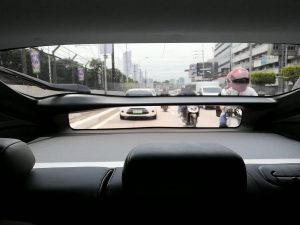 The view through the rear hatch, with the lower window, is excellent.

The cabin features a futuristic design with glossy white surfaces that may look like bathroom fixture to some. The seats are covered in perforated leather-like material with the front seats amply bolstered and the rear seat back featuring a 40:20:40 split to allow different shapes and sizes of luggage or cargo to be loaded at the back. Our Prius featured a proximity key with push-button start, cruise control, a clear display infotainment system with Bluetooth and USB connectivity, a reverse camera, and JBL speakers. 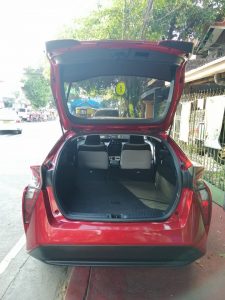 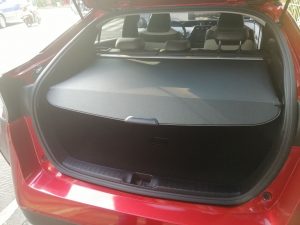 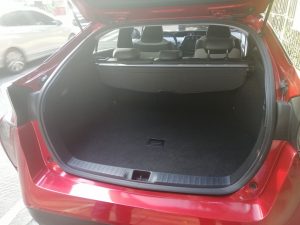 … and can accommodate 697 liters of luggage and other stuff with the seats up. 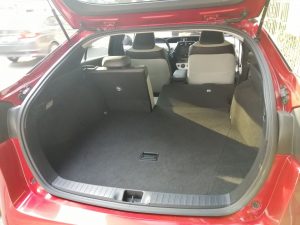 Rear seat back has 40:20:40 split to fit different cargo sizes and shapes… 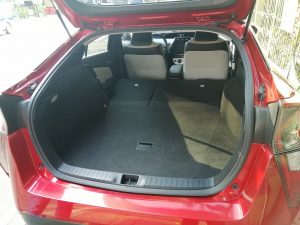 … or folded all the way to increase carrying capacity.

For the Inner Techie and Environmentalist

To lose weight, aluminum was used in the hood, rear hatch, front axle, and disc brake calipers. The sealed multi-module 202-volt 1.3 kilowatt-hour nickel metal hydride (NiMH) battery pack contains a charge control and relay for each module. To prolong battery life and to accept energy from regenerative braking, the battery pack is charged between 40% to 60% of its maximum capacity. A 12-volt battery is used to start the car and provide initial power to the on-board computer. 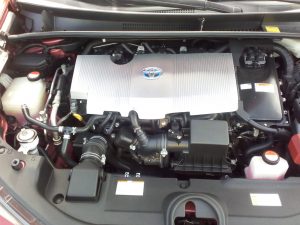 Under the hood is a 1.8-liter Atkinson-cycle 4-cylinder engine. 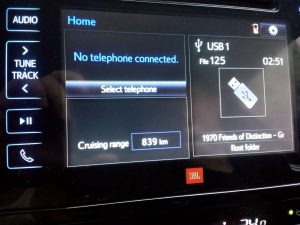 Hybrid power extends the fuel range of the 43-liter tank to more than 800 kilometers!

In manufacturing the Prius, Toyota used a wide range of plant-derived ecological bio-plastics, which are made out of cellulose derived from wood or grass, like kenaf and ramie, instead of petroleum. Kenaf comes from the hibiscus family, a relative to cotton and okra, while ramie or “China grass”, comes from the nettle family, which is one of the strongest natural fibers with a density and absorbency comparable to flax. Toyota has installed plans to promote ZERO carbon impact with the vehicle emissions and with their manufacturing processes. 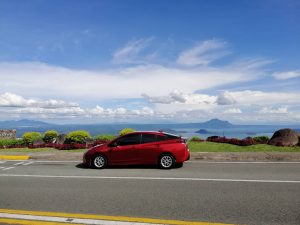 The Toyota Prius is all about keeping the environment clean…

Toyota claims that the Prius emits up to one ton less CO2 per year compared to an equivalent vehicle with a diesel engine driven at an average of 20,000 kilometers a year. And this is where the Toyota Prius appeals to the father in me. I would rather spend P2.2M on this hybrid than on a diesel-powered SUV to help clean the atmosphere and preserve the Earth for my children and my children’s children. As an added bonus, I get to drive a car that doesn’t look like anything else on the road plus one that rides smoothly and offers great fuel mileage. I just hope that our government officials are as concerned about the environment and the future… 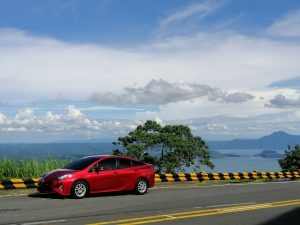 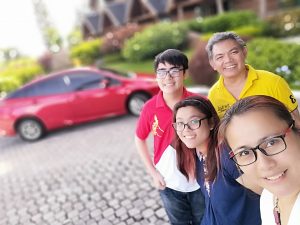