The Ubiquitous Jeepney: Looking Back to Simpler Times 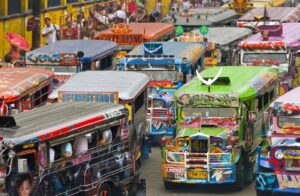 The ubiquitous jeepney is the most popular means of public transportation in the Philippines that it is sometimes referred to as the “King of the Road”. Known for their crowded seating and kitsch decorations, the jeepney has become the symbol of Philippine culture and art. However, because of concerns for public safety, the government has begun the phase-out of old jeepneys, especially those with antiquated smoke-belching powertrains, inadequately-reinforced chassis, and haphazard assembly.

Jeepneys add color (and diesel fumes) to any street corner that their drivers and operators turn into a terminal.

We’re flattered that the owner of this jeepney is a big fan of our magazine.

Jeepneys were originally made from U.S. military jeeps left over from World War II. The word “jeepney” may be a portmanteau word – some sources consider it a combination of “jeep” and “jitney” while other sources say “jeep” and “knee” because the passengers sit in very close proximity to each other. When American troops began to leave the Philippines at the end of World War II, hundreds of surplus military Jeeps were sold or given to the Filipinos. An American soldier, Harry Stonehill, was involved in the disposal of military surplus and created a black market for the surplus including jeeps. 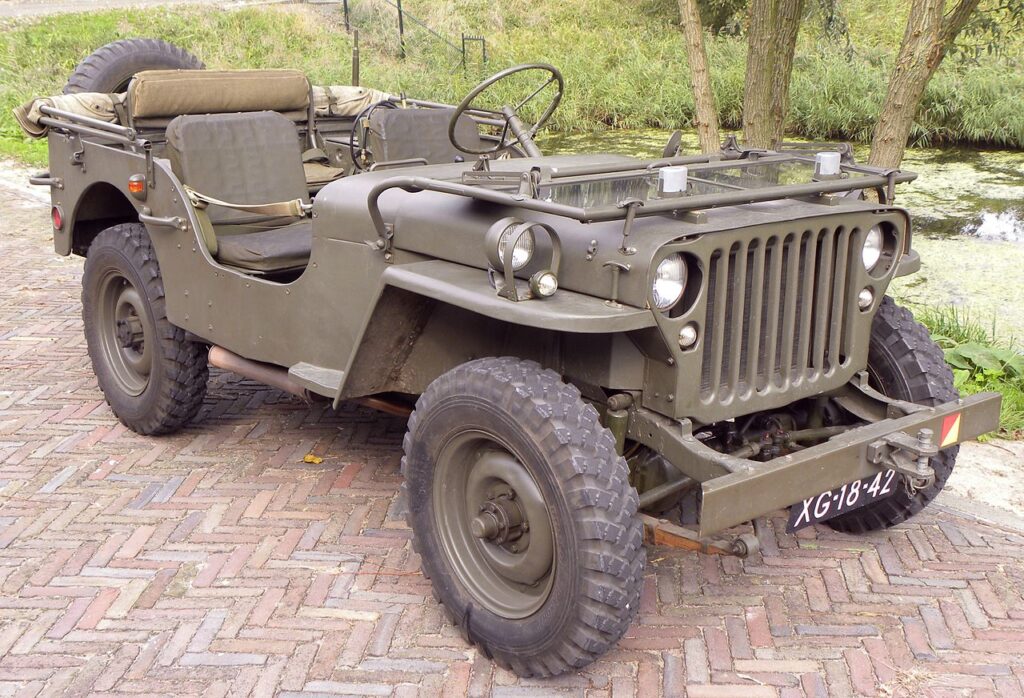 To provide mass transportation after the war, these military Jeeps, which were made by Willys or Ford, were stripped down and altered locally. Metal roofs were added for shade while vibrant colors with chrome-plated ornaments on the sides and hood adorned the vehicle. The back was reconfigured with two long parallel benches with occupants facing each other to accommodate more passengers. These were classified as passenger-type jeeps., which eventually became more popularly known as “jeepneys”. 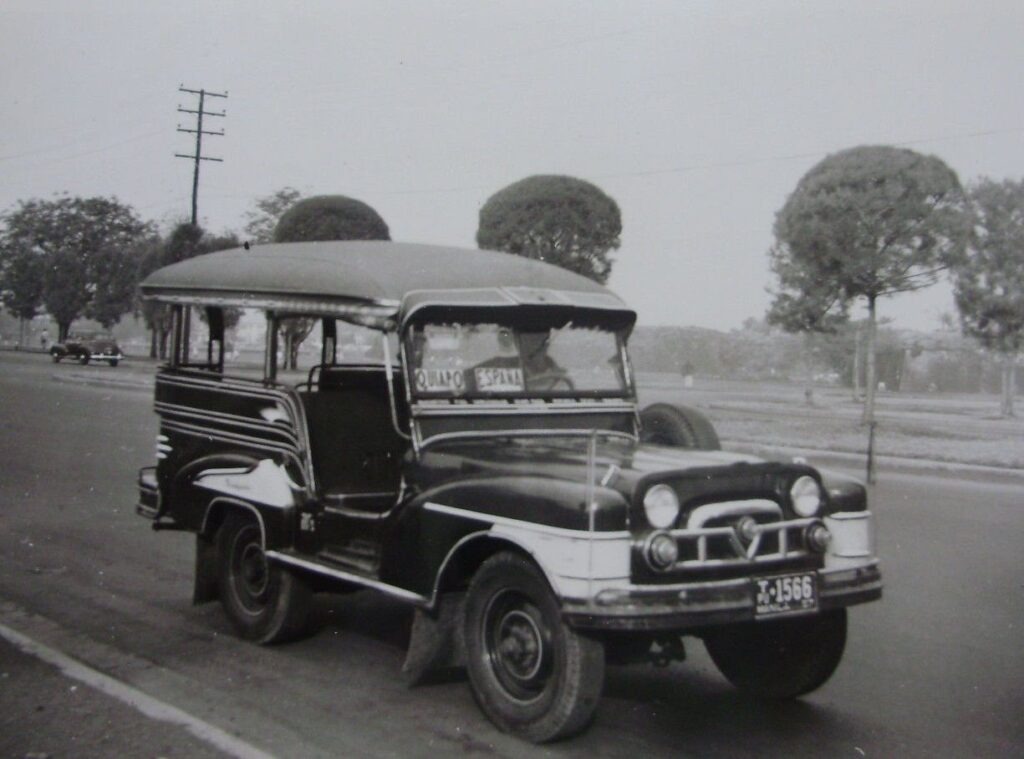 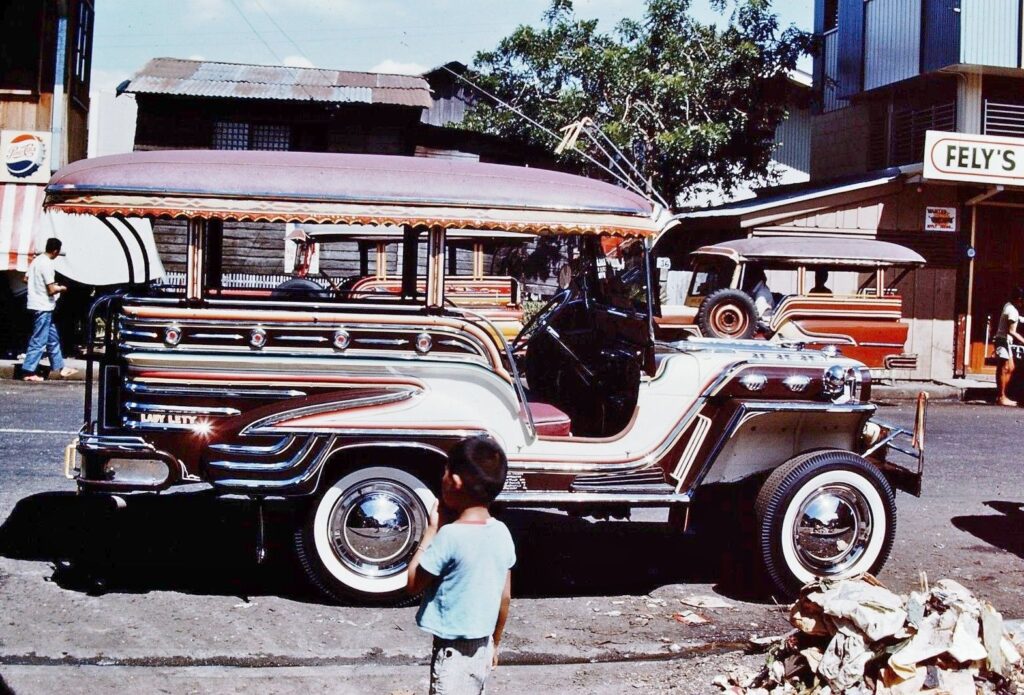 The size, length and passenger capacity of passenger-type jeepneys have increased as it evolved through the years. The non-extended, original-seat configuration jeeps were labeled “owner” (short for owner-type jeeps) and are used non-commercially. While the original jeepneys had short wheelbases and were refurbished military vehicles, modern versions are now produced with lengthened wheelbases, surplus engines and spare parts coming from Japan. 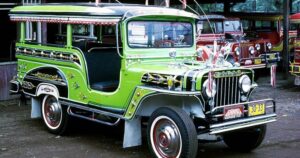 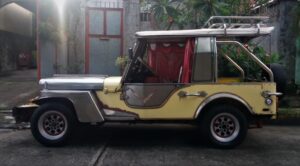 The brand name that has actually come to mean “jeepney” is Sarao, the company that first started making jeepneys in 1953. Sarao Motors, Inc. was established by Leonardo S. Sarao of Imus, Cavite who borrowed P700 to start his own jeepney assembly shop. Before the growth of backyard builders, Sarao Motors and Francisco Motors, both based in Las Piñas, were the largest manufacturers of jeepneys. A Sarao jeepney was exhibited at the Philippine pavilion at the 1964 New York World’s Fair as a national image for the Filipinos. 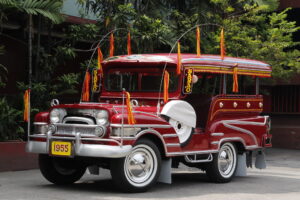 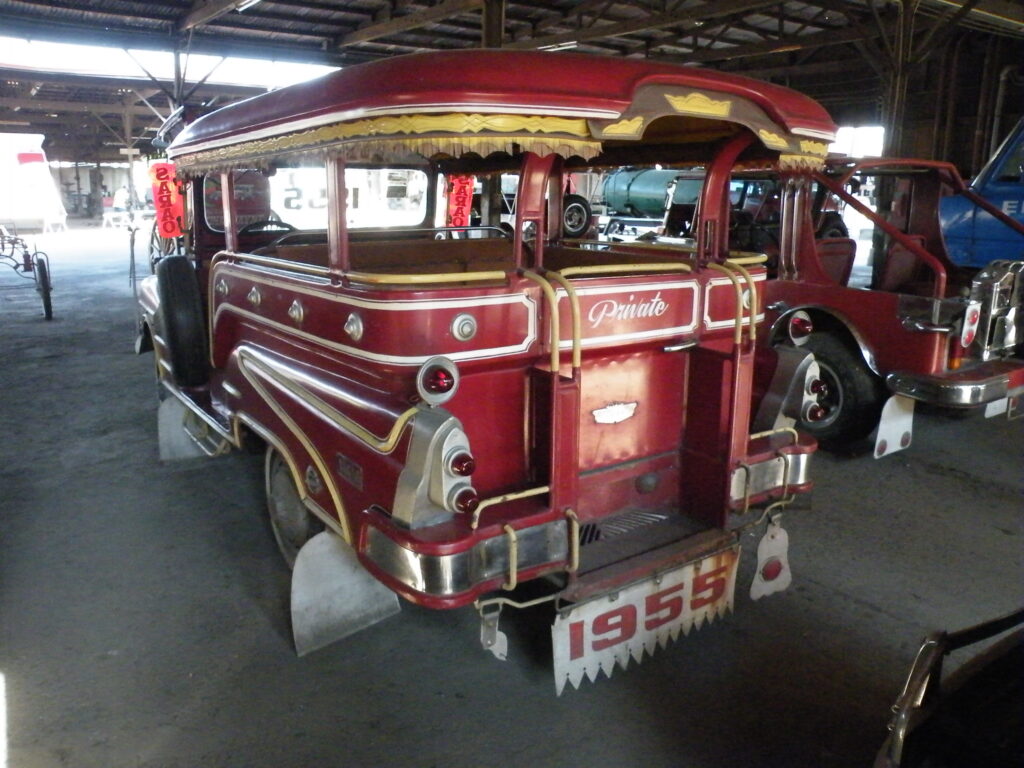 Detachable rear door is attached when the jeepney used for private transportation.

At its peak, Sarao jeepneys outnumbered other makes by a ratio of nearly 7 to 1. Today, Sarao Motors is still in business but it has downsized its operations while Francisco Motors has since ceased producing jeepneys. Because of his contributions to jeepney manufacturing assembly and designs, and for popularizing the jeepney as an established economic industry in the country, Leonardo Sarao received the Ten Outstanding Filipino award for entrepreneurship in 1991. 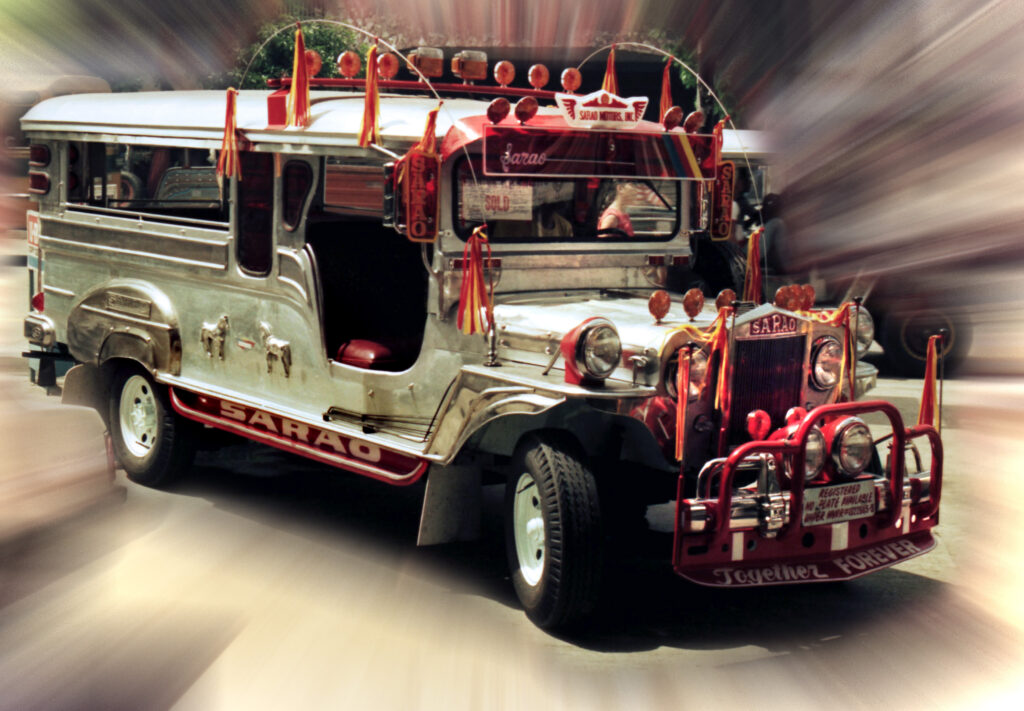 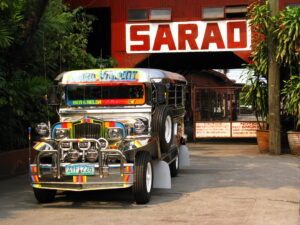 A Sarao Motors jeepney in front of the factory in Las Piñas.

Despite its reputation today, the jeepney was conceived as a popular and creative way to re-establish inexpensive public transportation that had been destroyed during World War II. With the widespread use of these commercial vehicles, the government began to regulate their use, including their routes and fixed fares. Jeepneys were once celebrated as vehicles that helped mobilize the nation. 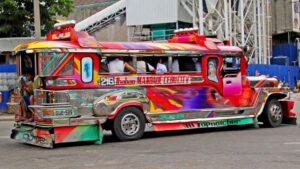 The jeepney industry has faced multiple threats in the recent years. Most of the larger jeepney builders are gone while the smaller builders are forced to go out of business. They are also facing increasing restrictions and regulations for pollution control and fuel consumption. The jeepney modernization program (Modern PUV) of the Department of Transportation (DOTr), which are actually diesel-powered mini-buses with electronic payment conveniences and WiFi connectivity, prompted several jeepney operators to shift from their old assembled jeepneys to these modern PUVs to keep their franchises. 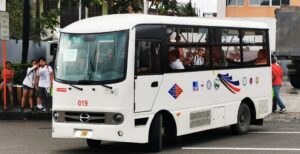 In 2016, the Manila Peninsula Hotel commissioned Alfred Motor Works, an automobile restoration shop, to restore a 1950s-style short-wheelbase jeepney to commemorate the hotel’s 40th Anniversary. Patterned after the original post-war jeepneys, this reproduction features a sealed door at the back to seal in the cool air generated by its air-conditioning system, which most jeepneys do not have. 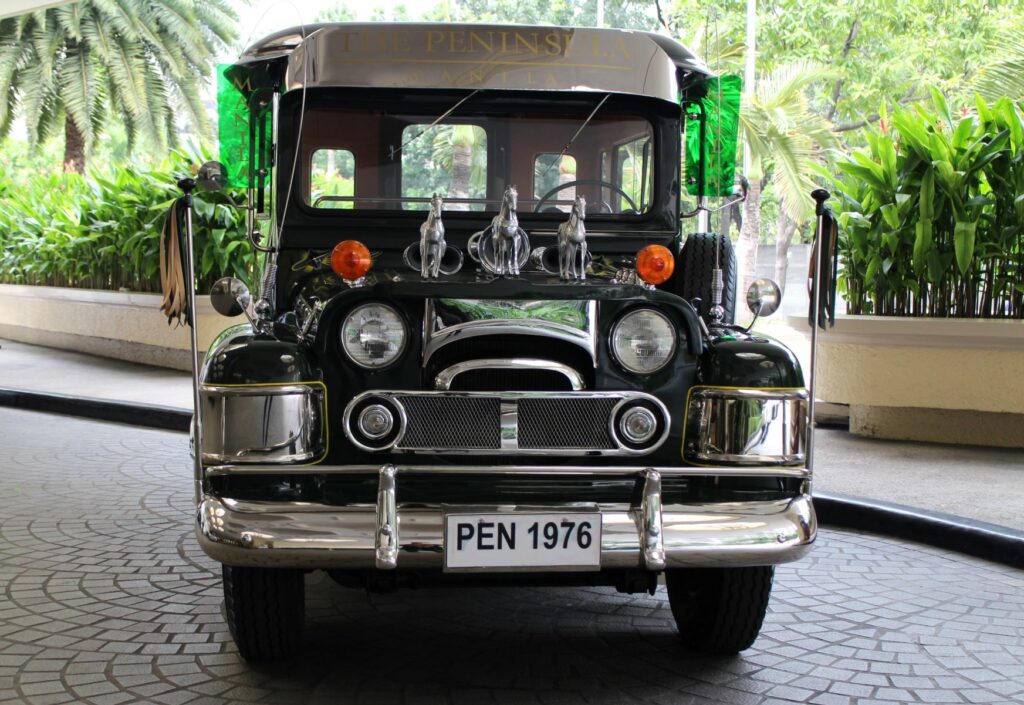 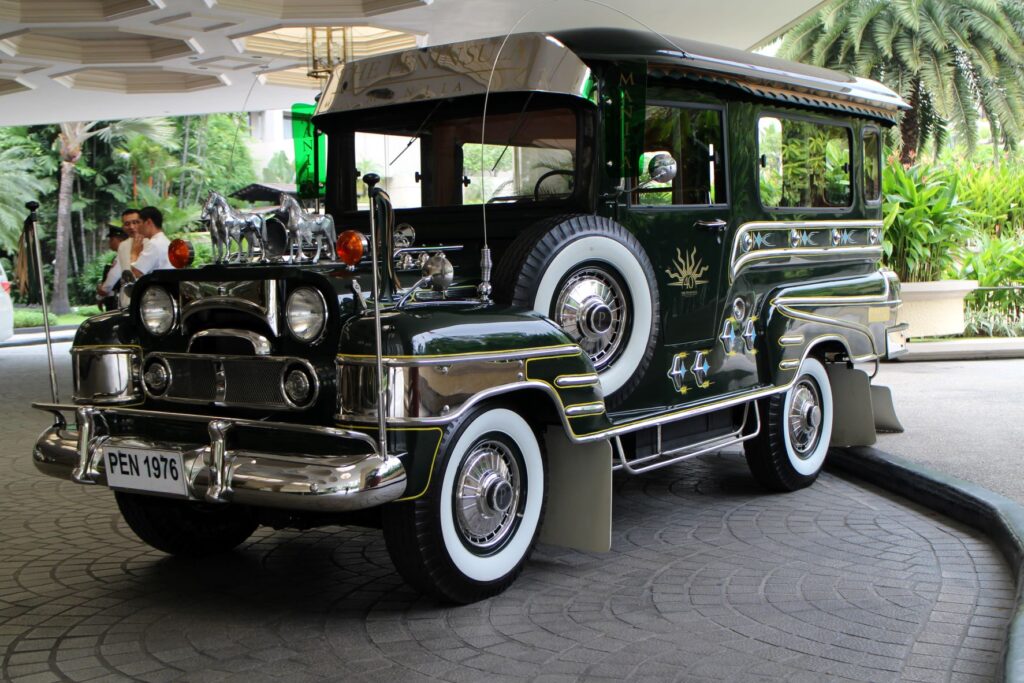 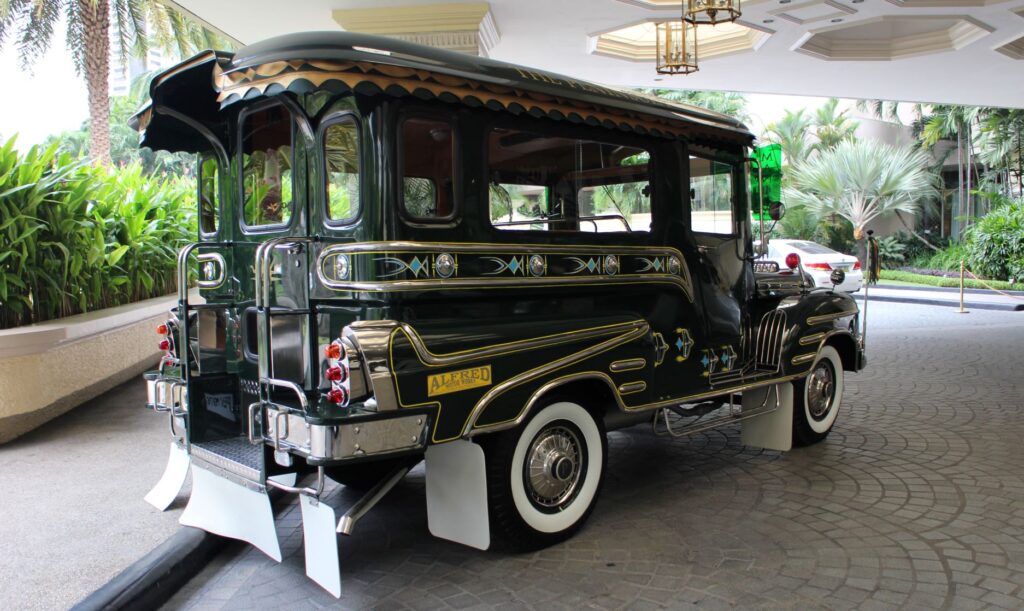 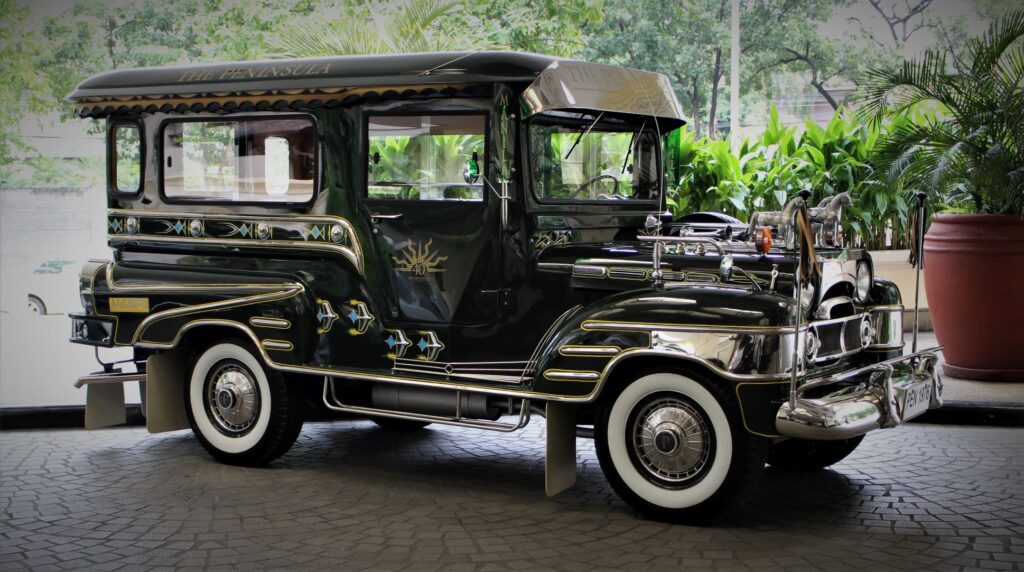 The wide white wall tires were added to show that the drivers of the old jeepneys were proud to be seen behind the wheel of their vehicles. The metal scale horses on the hood were reminders that the first jeepney drivers were working as drivers of calezas or horse-drawn carriages before the war. The rear tail light even features the “space age” design that was popular in the ‘50s as were the jet-like ornaments on the sides. We’re just thankful that a museum-quality relic of the ubiquitous jeepney was created to celebrate the vehicle that mobilized our nation. 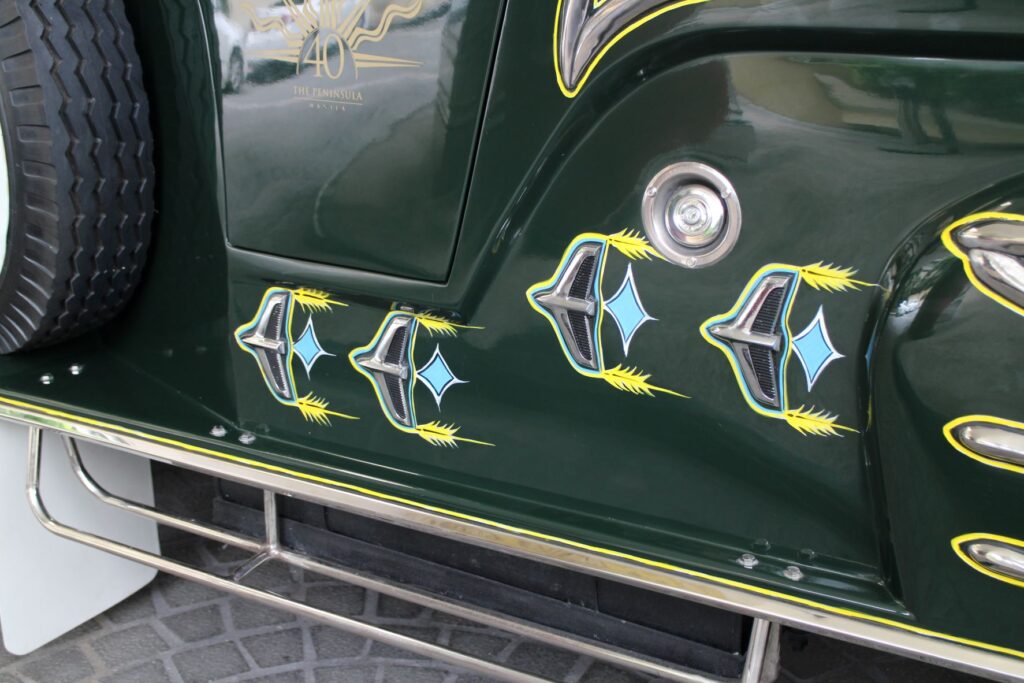 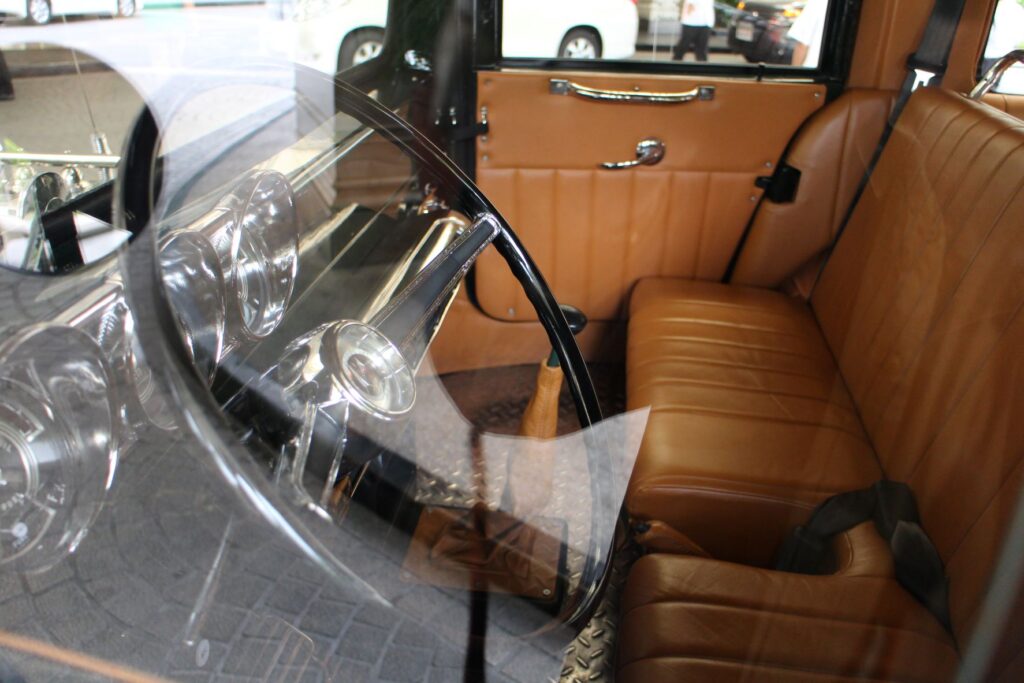 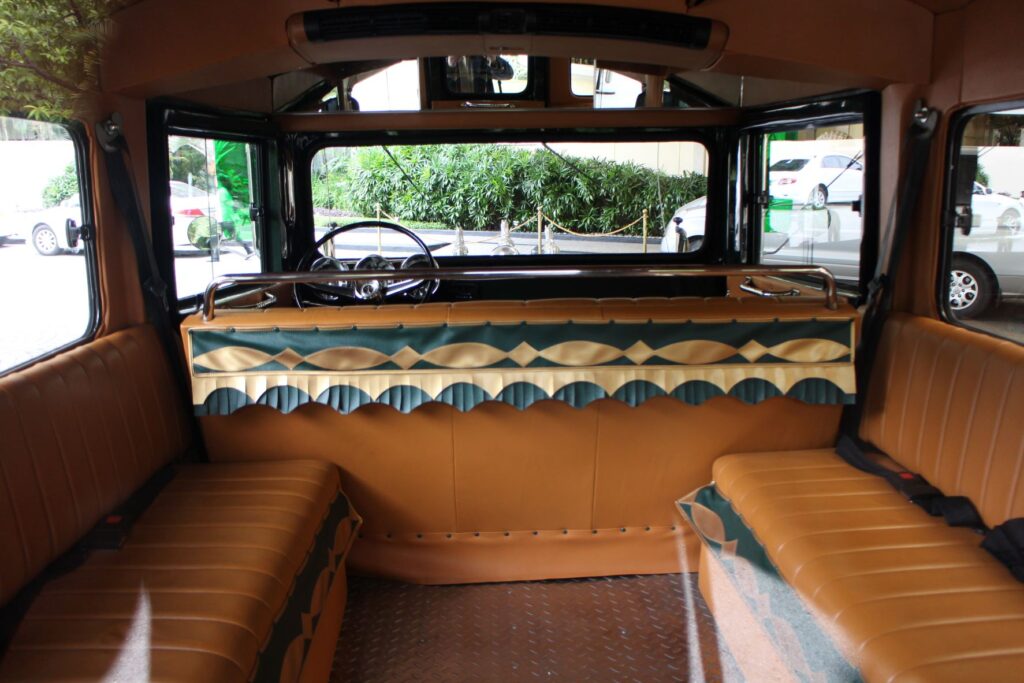 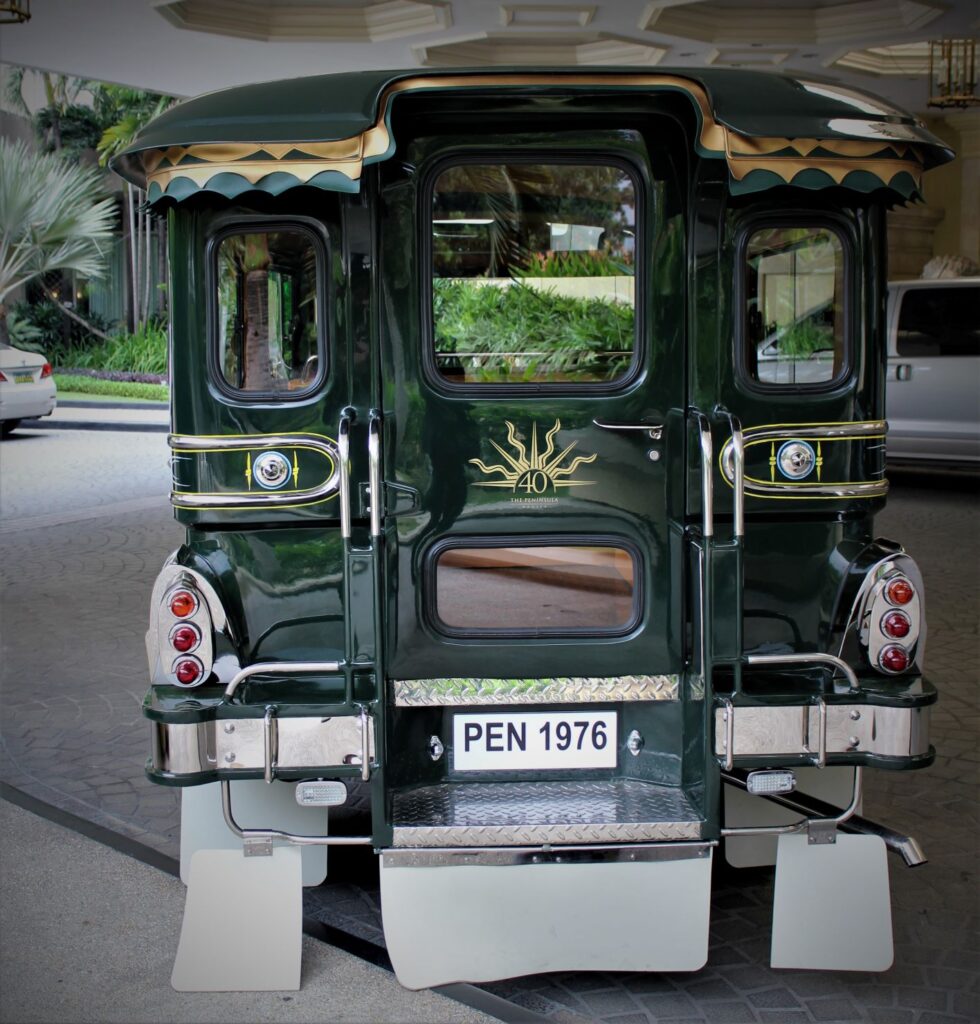