Don't Miss
Home > News > The “Ferrari Grand Tour, a journey through passion and beauty” exhibition at the MEF in Modena

The “Ferrari Grand Tour, a journey through passion and beauty” exhibition at the MEF in Modena

An annual appointment, that of Enzo Ferrari’s birthday on 18 February, becomes yet again the occasion for a new exhibition at the Enzo Ferrari Museum in Modena “Ferrari Grand Tour, a journey through beauty and passion” celebrates the international vocation and boundless fame of a marque that has dominated the world scene with unparalleled styling of its cars from the very early days. 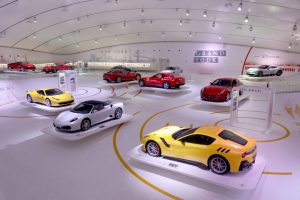 The main protagonists of this particular journey are some of Ferrari’s most elegant Grand Tourers; cars that not only won the hearts of high profile celebrity clients but are also linked to the world’s most fascinating cities.

The journey takes visitors through five multimedia arches representing five different cities: Paris, London, New York, Shanghai and Abu Dhabi. Thanks to a mix of images and audio, the arches create an immersive visitor experience evoking Ferrari’s connection with each of the cities and their geographical region. Each arch lies at the centre of waves of energy which contextualize each of the individual cars.

The Paris arch opens the area devoted to Europe. The “Ville Lumière” and its International Motor Show have provided the backdrop for many pivotal moments in the marque’s production history. In 1949, for instance, they hosted the debut of the 166 Inter Touring, a coupé clad in magnificently spare lines that made a huge impact for the marque and can be seen in the exhibition. Many other memorable unveilings followed, not least that of the 1954 Ferrari 375 MM, a one-off commissioned from Pinin Farina by Roberto Rossellini as a gift for his wife Ingrid Bergman.

With their heady mix of avant-garde and tradition which continue to flourish in motorsport temples of the likes of Goodwood , the United Kingdom has always rewarded Ferrari’s cars with starring roles. In the exhibition we find, for example, the Ferrari 330 GT 2+2, a coupé powered by a front-mounted V12 and immortalised in front of Westminster in 1964, when Colonel Ronny Hoare’s Maranello Concessionaires presented it to its clients.

The United States has an enduring relationship with Ferrari too, strengthened through friendships with musical artists such as Miles Davis and Hollywood stars such as Jane Mansfield. A major contribution also came from high profile events, including the 2016 30 Million Cars Rally which included the 1959 250 GT Berlinetta SWB, also featured in the exhibition. Venerated by many collectors as the ultimate GT, the car is famous for its exceptionally pure lines and incredible tally of race victories. 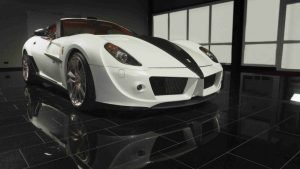 Shanghai is an extraordinary city that acts as a melting pot for the Far East’s ancient aesthetic matched with that of the West. This is highlighted to stunning effect in the exhibition through the image of a 2006 599 GTB Fiorano with bodywork decorated by the artist Lu Hao in the style of Song Dynasty porcelain. Alongside this artistic masterpiece is the Ferrari 612 Scaglietti which, in 2005, just a year after its launch, proved its matchless comfort and performance on a 15,000-mile tour of China. Also featured is a photograph of the 2018 Ferrari Portofino in the Shibuya quarter in Tokyo, another vibrant touchstone for the Ferrarista community in the Far East.

Abu Dhabi is one of the undisputed Middle Eastern capitals of luxury and passion for the Prancing Horse as epitomised by Ferrari World, the marque’s dedicated theme park. In fact, the all-wheel-drive Ferrari FF, which hailed a revolution in both styling and performance was unveiled in the park in 2011, shortly after its successful debut at the Geneva International Motor Show. The arch also references the International Cavalcade that last year celebrated the 25th anniversary of Ferrari’s arrival in the United Arab Emirates with a parade of over 100 cars. 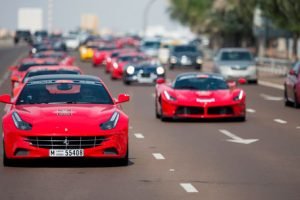 Last but very far from least, the Grand Tour arrives in Italy with the Ferrari Roma, the latest masterpiece from the Maranello Style Centre which developed this glorious contemporary take on the sophisticated chic of the Dolce Vita of the 1950s and 60s. A lifestyle and aesthetic choice that is not confined to Italy but which, as the exhibition reveals, Ferrari interprets all over the world.