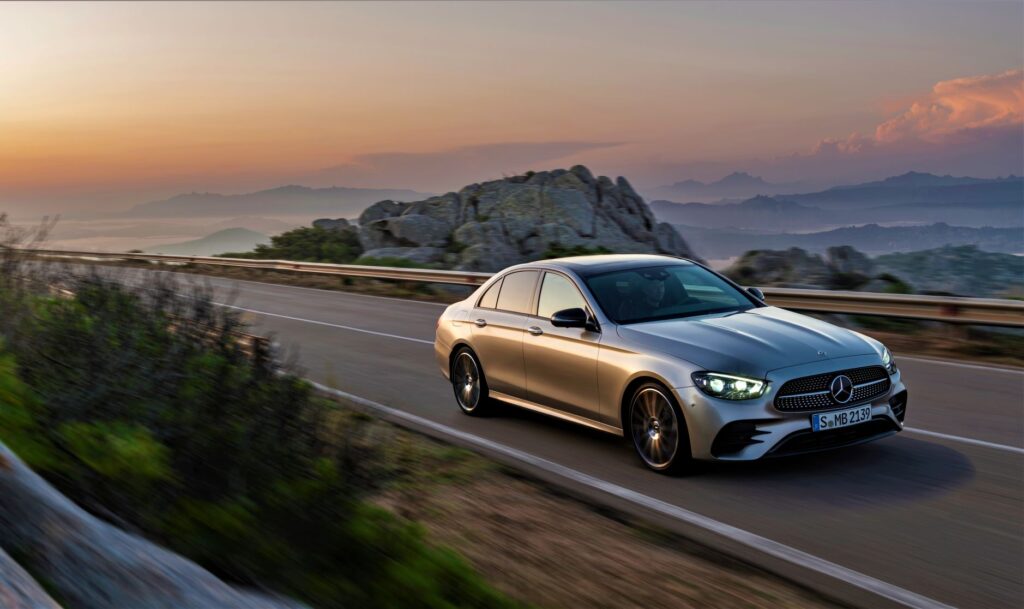 Auto Nation Group, Inc. (ANG), the official distributor of Mercedes-Benz automobiles in the Philippines, held an online virtual launch of the new updated version of the Mercedes-Benz E-Class last February 2, 2022. Internally known as the W213, the midsize German premium luxury car has undergone a comprehensive update, with new intelligent features, enhanced dynamics and a fresh appearance. With its clean yet emotionally appealing design, high-quality exclusive interior, and innovative driving assistance features, the W213 established styling trends when it was launched in 2016. 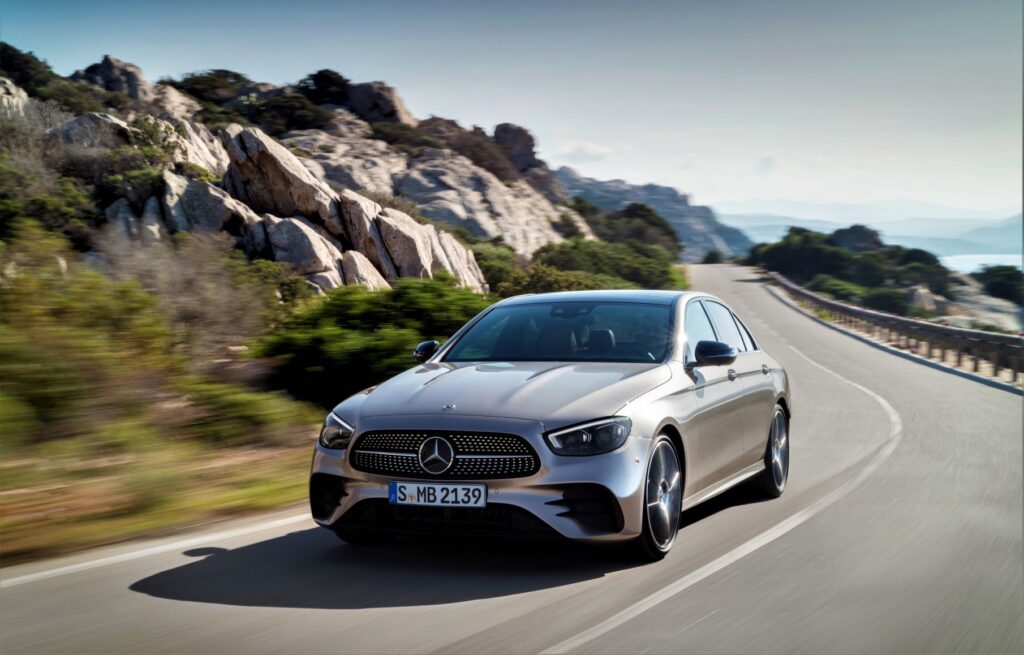 This successful combination of emotional appeal and dynamic intelligence continues in the 2022 iteration of the W213. “The new E-Class offers a refined sportiness, impressive design, and improved dynamism”, Frankie Ang, Chief Operating Officer (COO) of Auto Nation Group stated during the launch. “It embodies a synthesis of emotion and intelligence. It is loaded with next-generation driver assistance systems, comfort features and safety technologies, that bring luxury experience to new levels and giving an even stronger impression.” 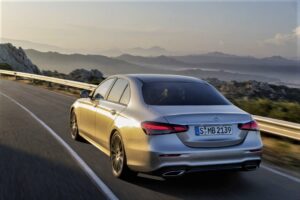 A Study of Evolution and Innovation 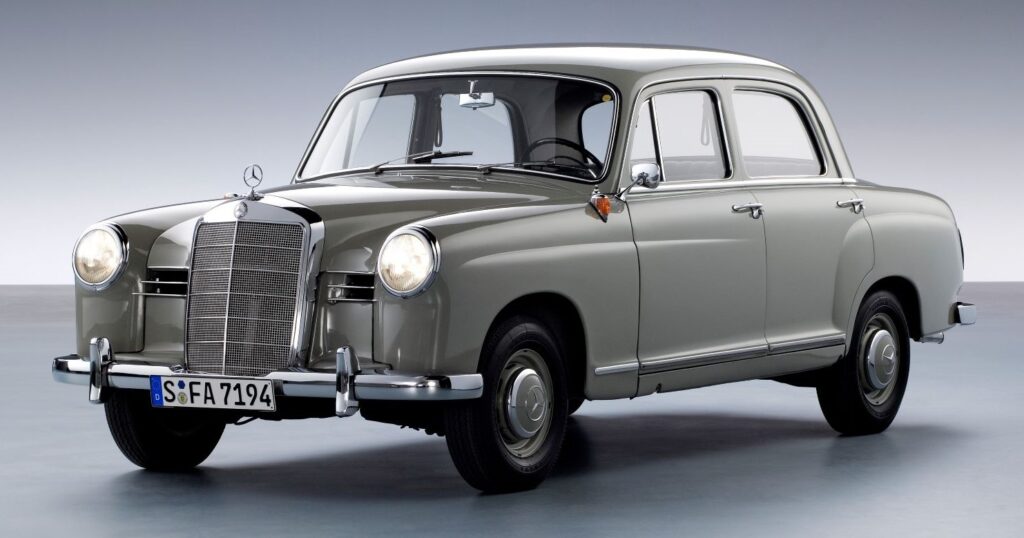 The 1962 Mercedes-Benz 190/190D (W110) became more popularly known as the Fintail (Heckflosse) because of the tailfins incorporated into its rear design, which was claimed to help locate the back of the car during reverse. In 1965, the M121 engine displacement grew to 2.0-liter while a 2.3-liter inline 6-cylinder M180 engine appeared for the first time in the company’s midsize car model. 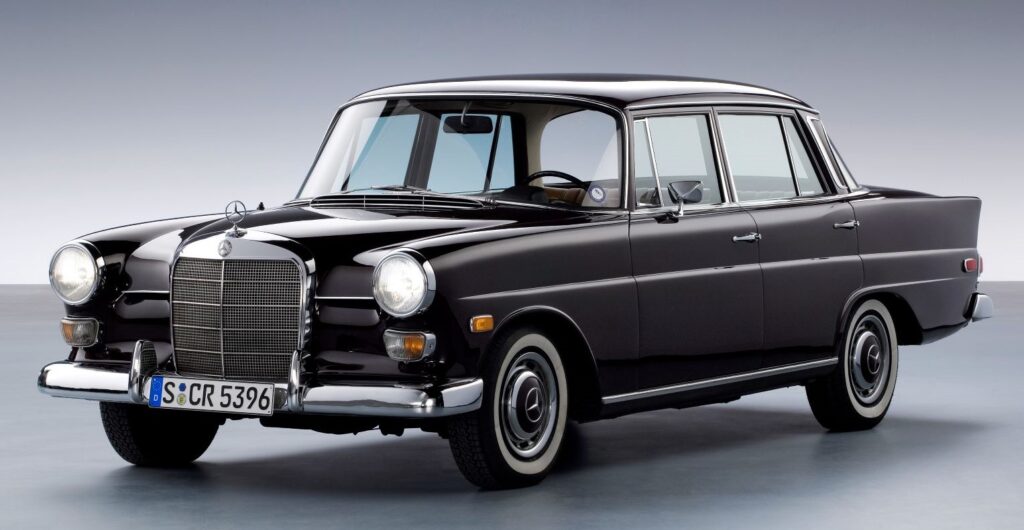 In 1968, Stuttgart marketed the W114/W115 models with a “/8” (slash-8) designation and it eventually became known as the Stroke-8. W114 refers to more popular 6-cylinder models while W115 refers to the 4-cylinder gas and diesel models. The 1969 MB 250CE  was the company’s first midsize coupe and the first Mercedes-Benz model to use the Bosch D-Jetronic fully electronic fuel injection system (EFI). 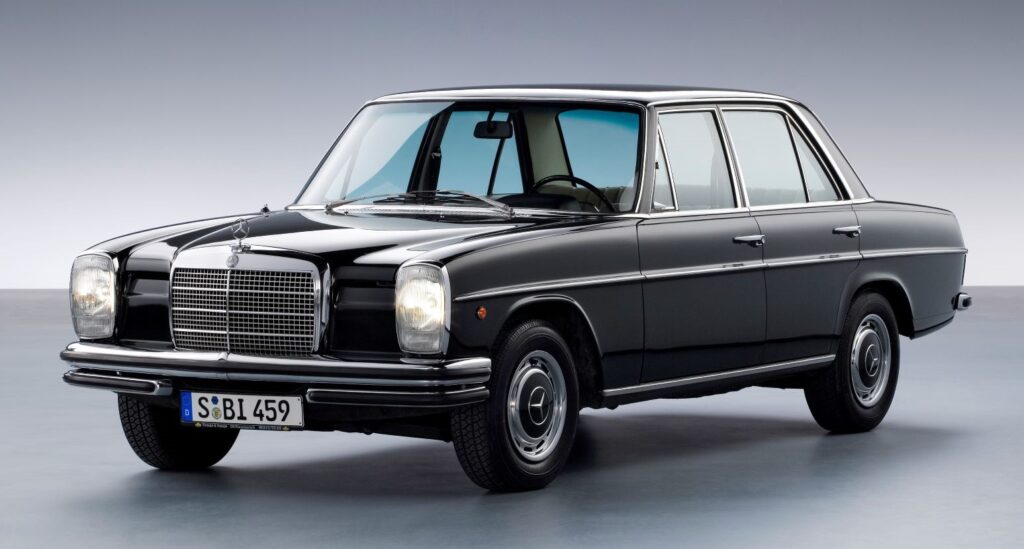 Launched in November 1975, the Mercedes-Benz W123 became the most popular model in the company lineup with over 2.7 million units sold when production ended in 1986. This model was offered in several guises – sedan (W123), coupé (C123) and wagon (S123) bodies with a choice of several 4-, 5- or 6-cylinder engines in gasoline or diesel, in naturally-aspirated or turbocharged configurations.

When the W124 was launched in 1984, it introduced several new standards for a midsize Mercedes-Benz. Aside from the sedan, coupe and wagon bodies, a convertible (A124) was also available for the first time. The E-Class name first appeared with the facelifted w124 in 1993 when Mercedes-Benz switched to a new badging system, putting the E in front as in E300 instead of 300E. Aside from the available 4- and 6-cylinder gas and diesel engines, V8 engines were fitted into the 1992-93 400E/500E and 1993-95 E420/E500 performance models. 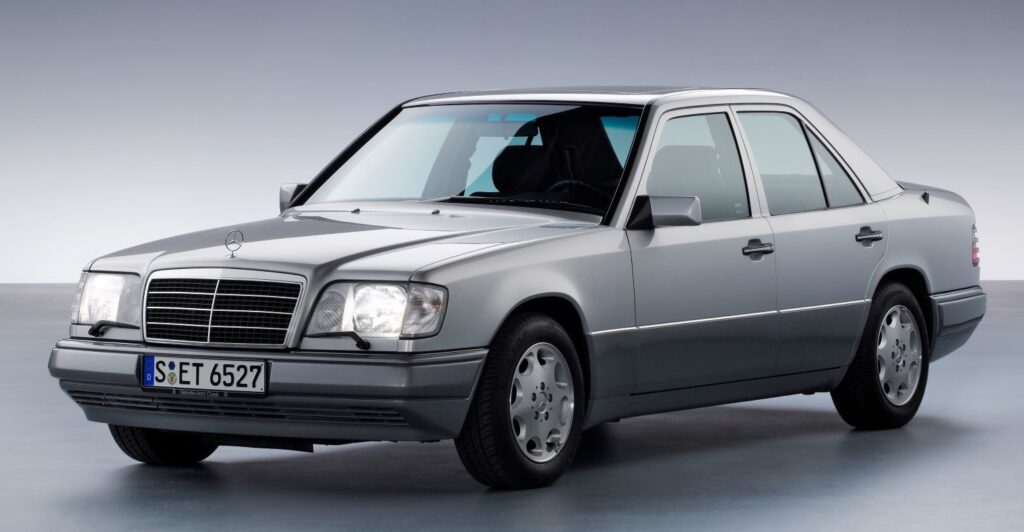 The W210, which was launched in 1995, bought the E-Class into the upper end of the midsize premium luxury market. It brought major changes, including an updated image that attracted more younger buyers and women. After it was chosen as Motor Trend’s Import Car of the Year for 1996, the W210 received a facelift in 1999. 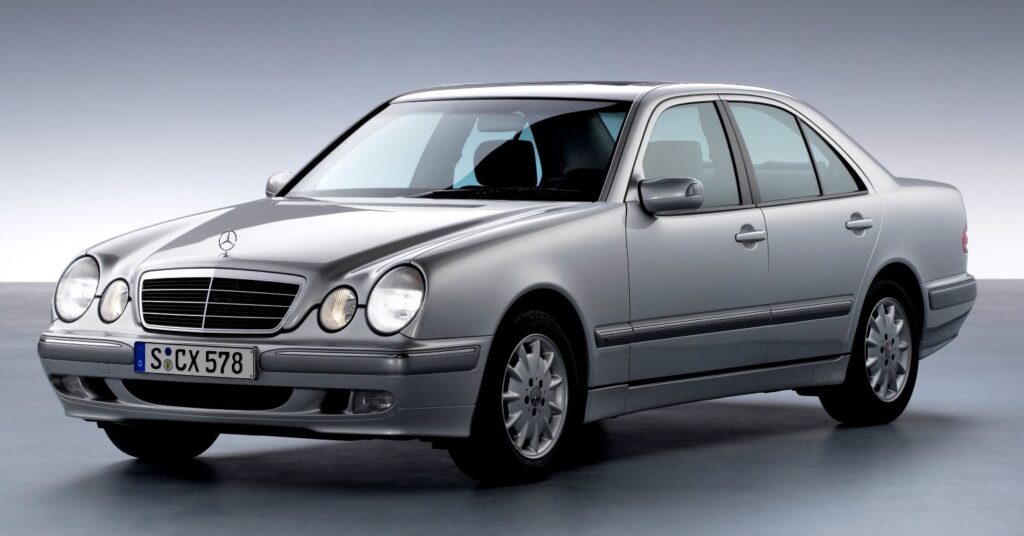 Launched in 2002, the Mercedes-Benz W211 gained worldwide prominence with a starring role as the car of Will Smith’s character Agent J in the movie “Men in Black 2“. 2007 saw an updated W211 with the PRE-SAFE® system becoming standard while the powerful E500 V8 grew from 5.0 to 5.5 and 6.3 liters for the E55 and E63 models, including AMG variants. 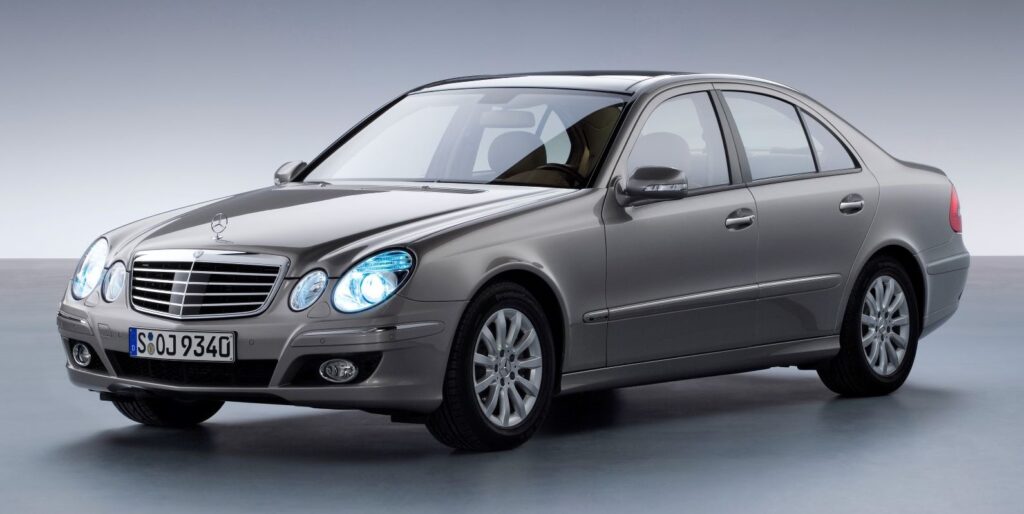 In 2009, the W212 was introduced as a 2010 model after much press leaks. Innovations included GDI direct injected forced induction engines, blind spot monitor, Lane Keeping Assist, PRE-SAFE® with Attention Assist, and Night View Assist Plus. It got a comprehensive update in 2013 with fuel economy improvements, updated safety features, and significant styling changes, including the switch to singular front lights from the twin headlamp design, which marked the end of Mercedes’s dual headlamps designs.

Unveiled at the 2016 North American International Auto Show, the Mercedes-Benz W213 E-Class featured a curvier and more flowing design than the previous model. Said to be the second most technologically advanced Mercedes after the flagship  S-Class model, certain E-Class variants even received the latest autonomous driving technology for use at highway speeds, capable of piloting itself up to speeds of 210 km/h for up to 2 minutes, using a complex array of motion sensors, radars and cameras to scan the road ahead. 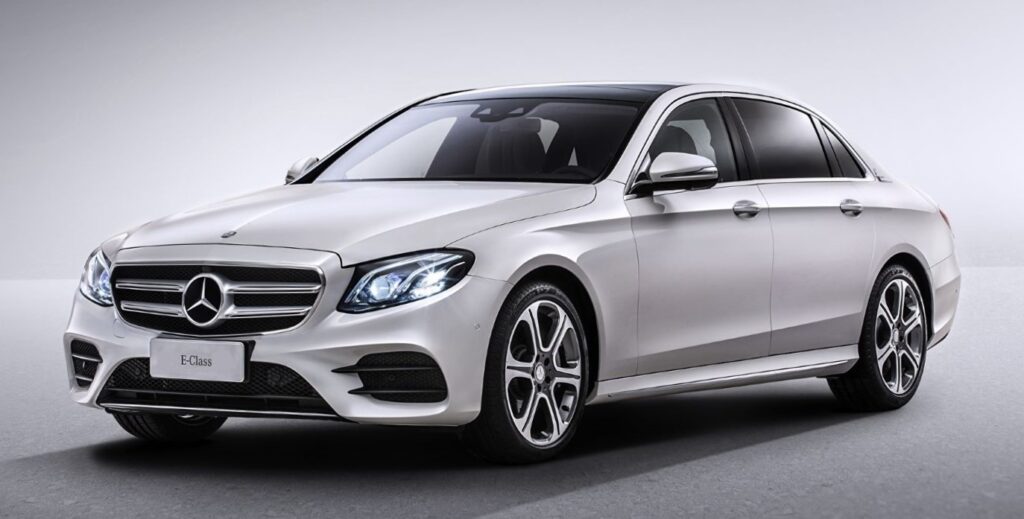 The updated 2022 W213 E-Class is more sophisticated, sportier, and confidently more stylish. Its many enhancements are wrapped in a timelessly modern design. The fresh appearance starts with the new front end featuring the revised grille that has been redesigned with radiator trim with diamond pins in chrome and insert in high-gloss black, as well as a pair of redesigned headlamps equipped with high-performance LED headlights. 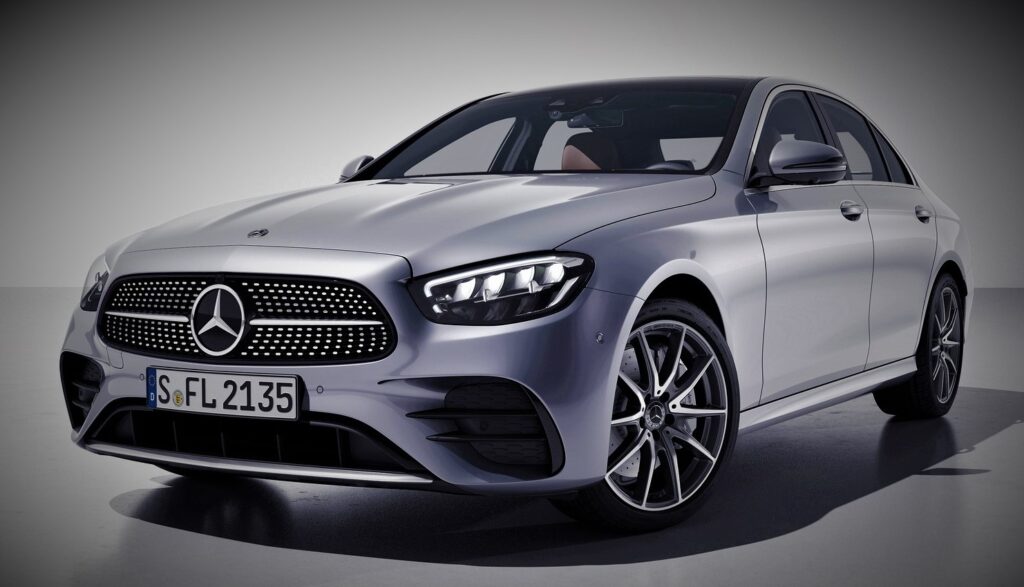 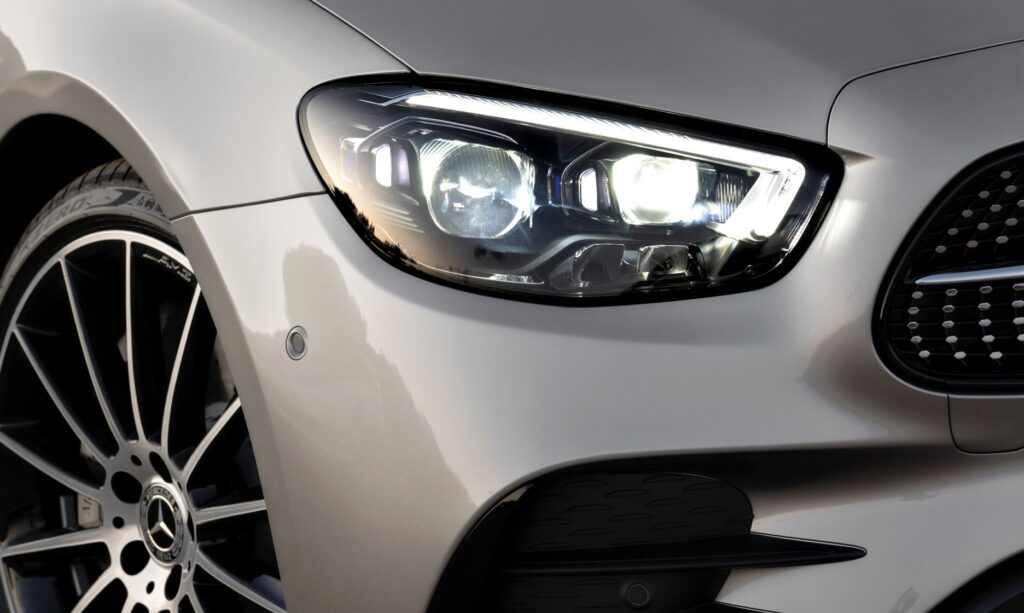 Available in a sporty AMG Line body styling, it comes with a set of 19-inch AMG 5-twin spoke light alloy wheels painted in tantalite gray with a high-sheen finish. The rear end has been updated with two-piece LED taillamps that wrap horizontally around the rear body to make the car appear wider and stronger. The new taillamps feature geometrically designed LEDs that replaced the crystalline optic of the previous design. 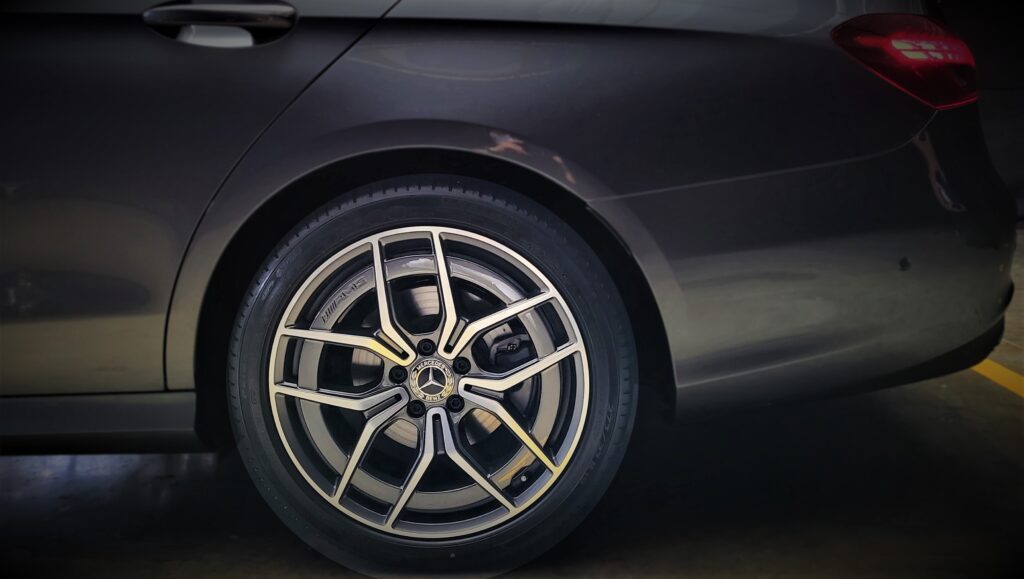 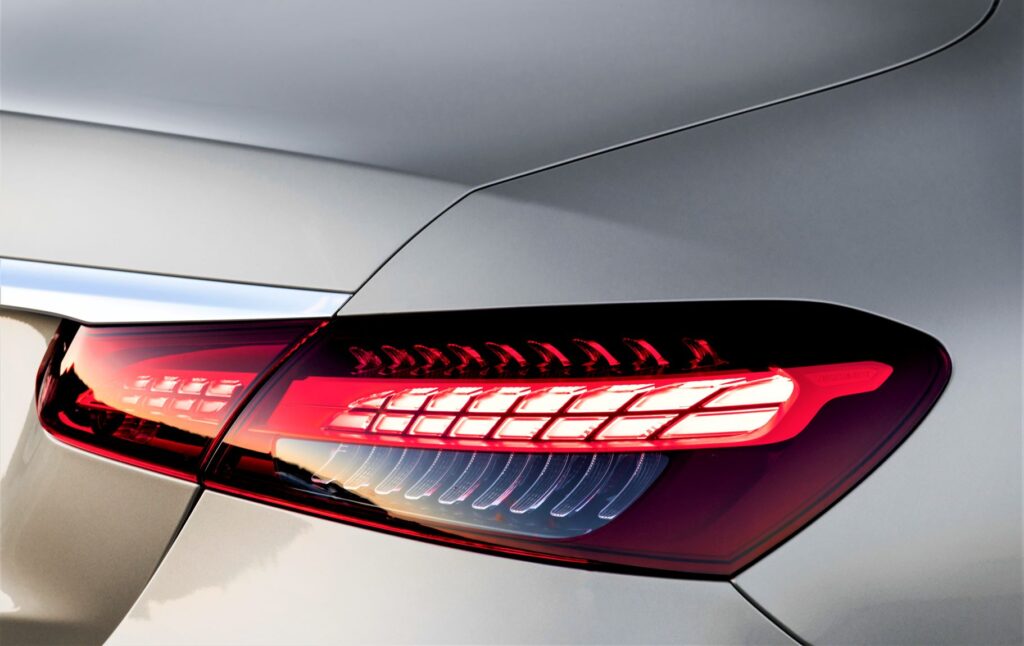 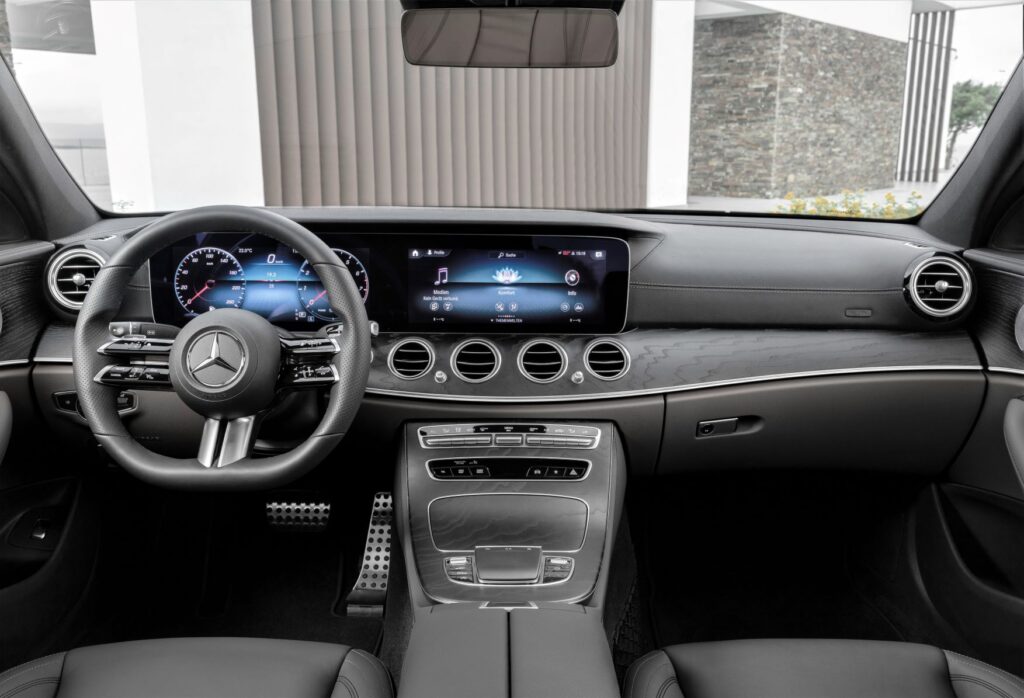 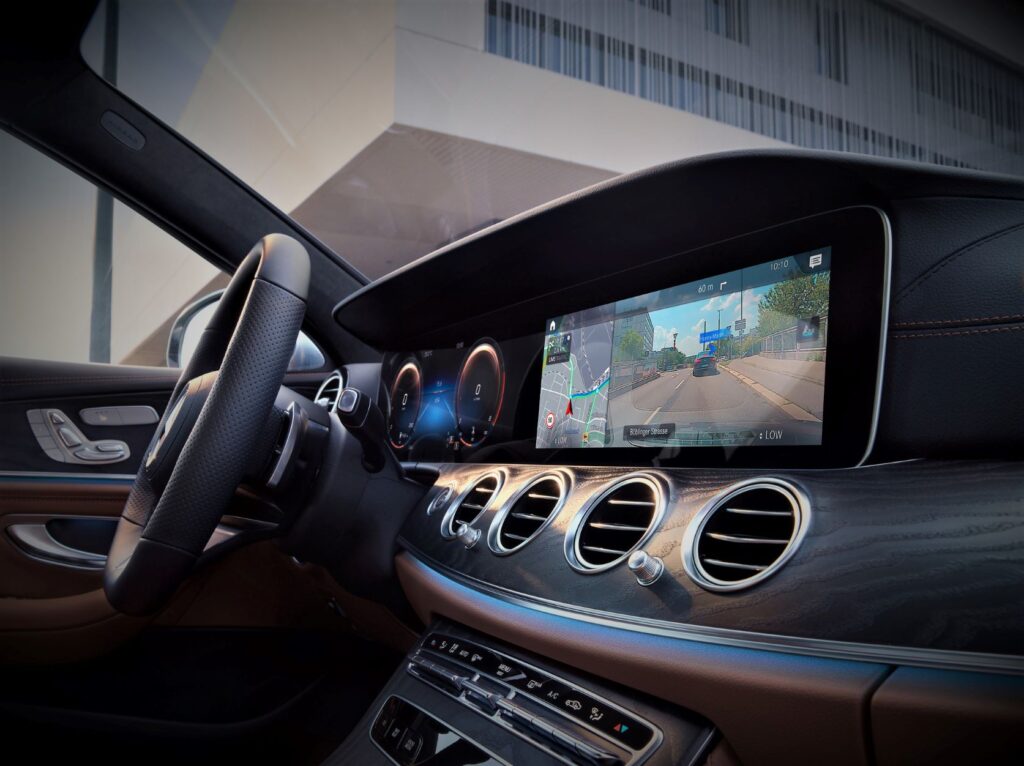 Always at the forefront of safety innovations in the automobile industry, Mercedes-Benz equipped the new E-Class with safety features and driver assistance technologies that keep both driver and passengers safe while on the road. The impressive array of safety features include PRE-SAFE® system, Attention Assist, Active Brake Assist, Active Parking Assist with an advance reversing camera to provide support to the driver during parking maneuvers, and Urban Guard vehicle protection anti-theft alarm system with tow-away protection that detects changes with the movement of the vehicle. 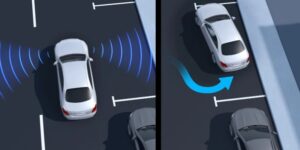 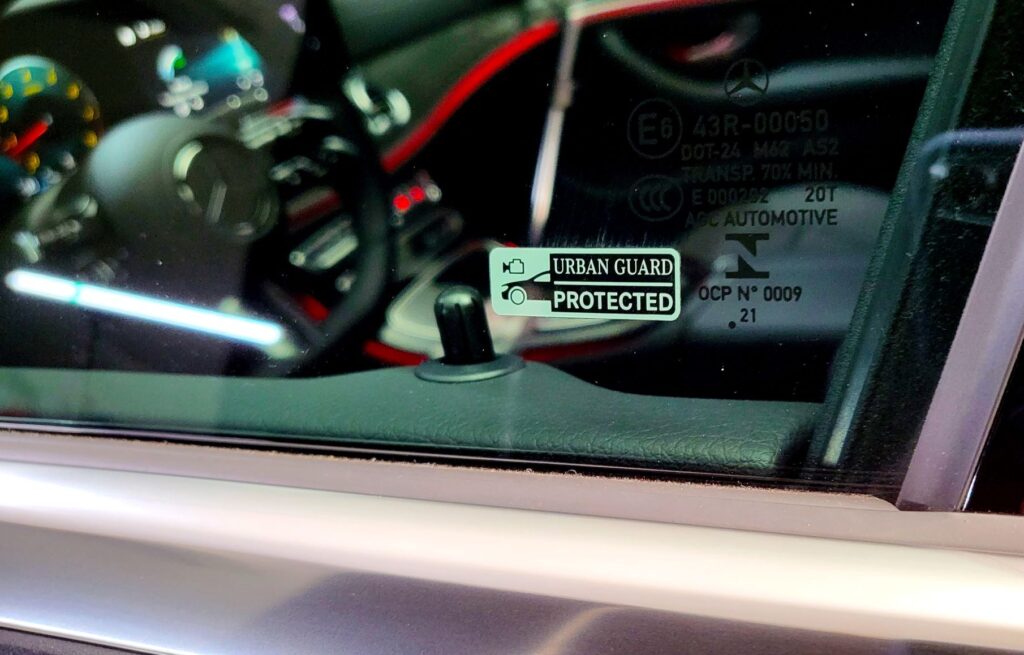 As the epitome of comfort, safety, and fuel economy in the midsize premium luxury car segment, the locally-available 2022 Mercedes-Benz E200 is powered by 197-horsepower 2.0-liter inline 4-cylinder gasoline engine with 320 Newton-meters of torque that is transferred to an efficient 9G-TRONIC 9-speed automatic transmission, which can swiftly change gears at low engine revs, enhancing fuel efficiency and lowering noise levels. 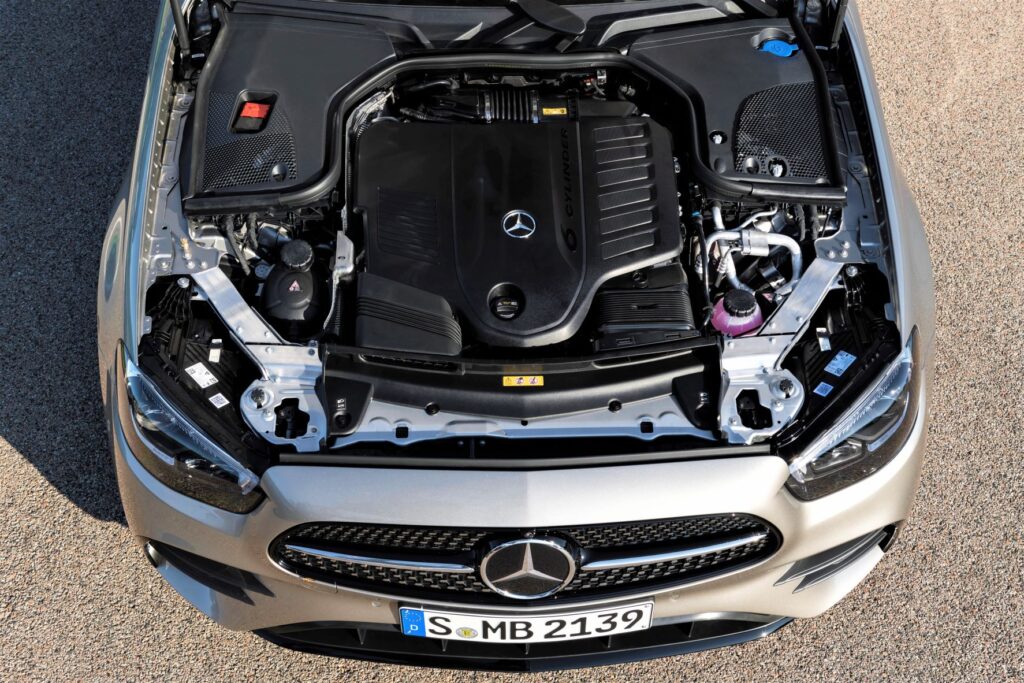 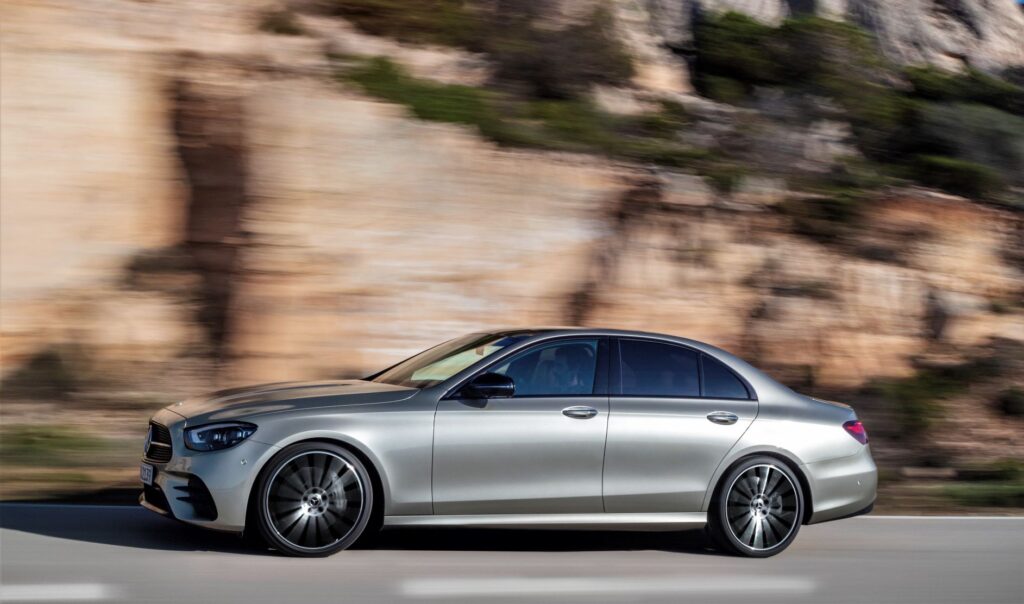 The new 2022 Mercedes-Benz E-Class is now available for you to enjoy! 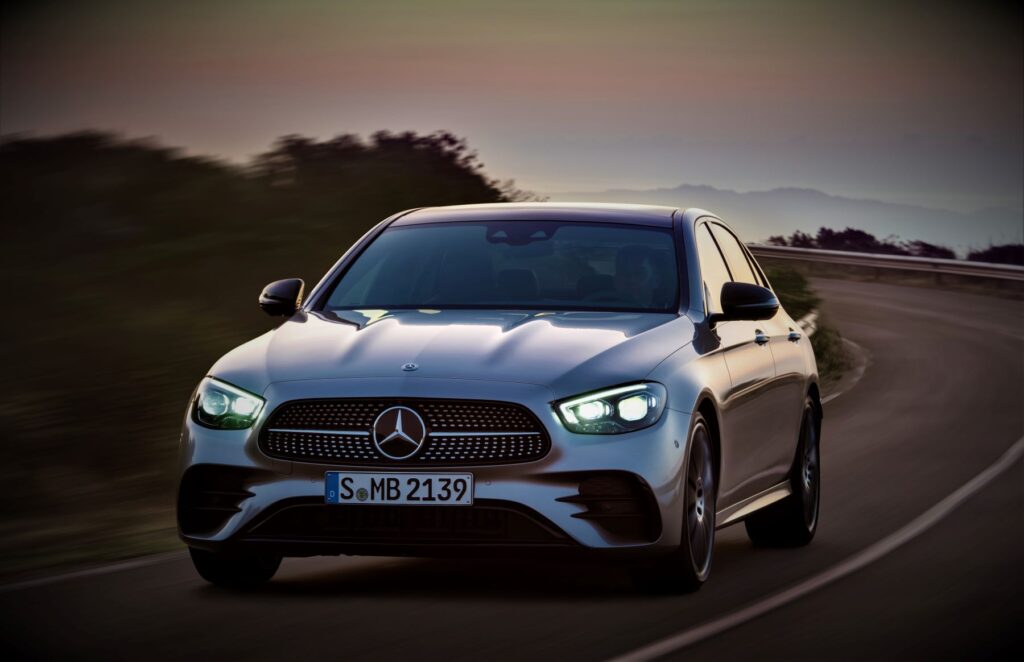