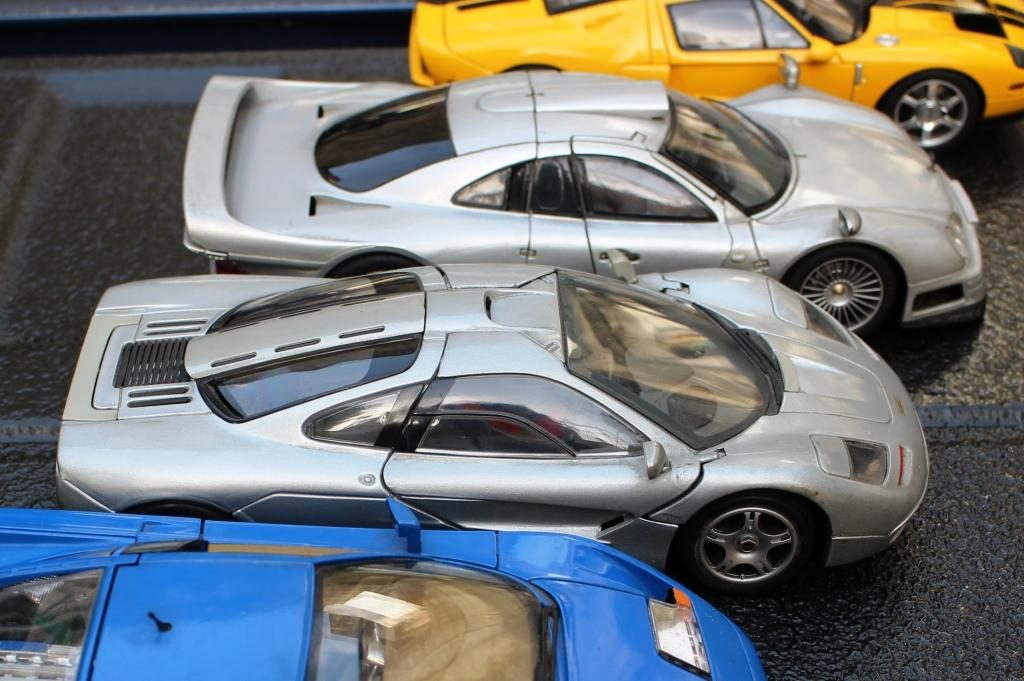 Produced by Mercedes-AMG, the performance and motorsports arm of Mercedes-Benz, the CLK GTR was designed primarily as a race car intended to compete in the 1997 FIA GT Championship Series, where Mercedes saw an opportunity to go against manufacturers like Porsche and Ferrari and promote itself as a sports car maker on top of a luxury car brand. The company had to produce road cars to meet homologation standards and thus, the limited-production road-going CLK GTRs were actually race cars that can be driven on the road. 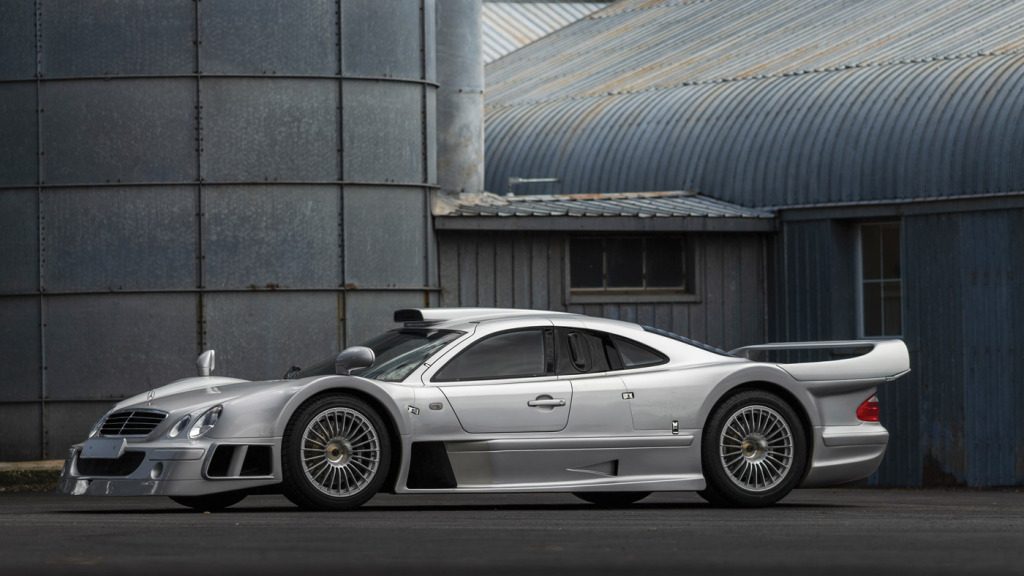 Mercedes-AMG’s designers and engineers developed a car that shared some design elements with the production Mercedes-Benz CLK (W208/C208) but with all the features of a racing car underneath. A 600 hp Mercedes-Benz M120 V12 engine was mounted mid-ship behind the cockpit and the bodywork was made entirely of carbon fiber with many aerodynamic design elements and cooling vents for the race track. 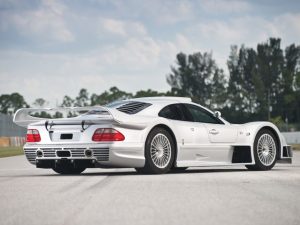 To test the CLK GTR before the actual cars were built, Mercedes-AMG secretly purchased a disused McLaren F1 GTR (Aha! Here’s the connection) to see the kind of lap times that their competitors could run and serve as a measurement of the CLK GTR’s abilities. Mercedes-AMG then modified their F1 GTR by attaching bodywork that was meant for the CLK GTR. The BMW V12 engine of the McLaren was also replaced with a Mercedes-Benz 6.0-liter V12 engine and Mercedes-AMG was able to perfect the aerodynamics of the CLK GTR even before it was built. 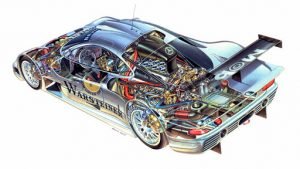 Two CLK GTRs debuted at the opening of the 1997 FIA GT Championship season at one of Mercedes-Benz’s home tracks, the Hockenheimring. Brake problems eliminated one car after five laps while the other car finished over 20 laps behind the winning McLaren. By the next round at Silverstone, the CLK GTR began to show its pace, finishing less than a second behind the winning McLaren. 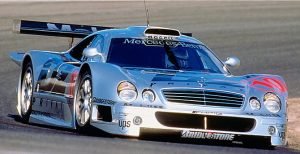 In the fourth round at the Nürburgring, a third CLK GTR was added to the team, and Mercedes-Benz successfully outperformed the fleet of McLarens, taking first and second places. The team would finish the season with five more wins at A1-Ring, Suzuka, Donington, Sebring, and Laguna Seca to secure the 1997 Team Championship as well as the Driver’s Championship for Bernd Schneider.

Mercedes-Benz would use the CLK GTR for the first two rounds of the 1998 season before switching to the CLK LM. Private team Persson Motorsport would campaign two CLK GTRs throughout the entire season, taking a best finish of second at Oschersleben before finishing the year third in the teams championship. 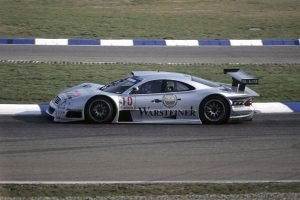 Even though the FIA GT1 class was cancelled in 1999, Mercedes was obligated to deliver the required minimum 25 road cars as per FIA rules. The first road car was built in 1997 and was retained by Mercedes. The other road cars were built by AMG at the Affalterbach factory between 1998 and 1999, and differed only slightly from the race car. 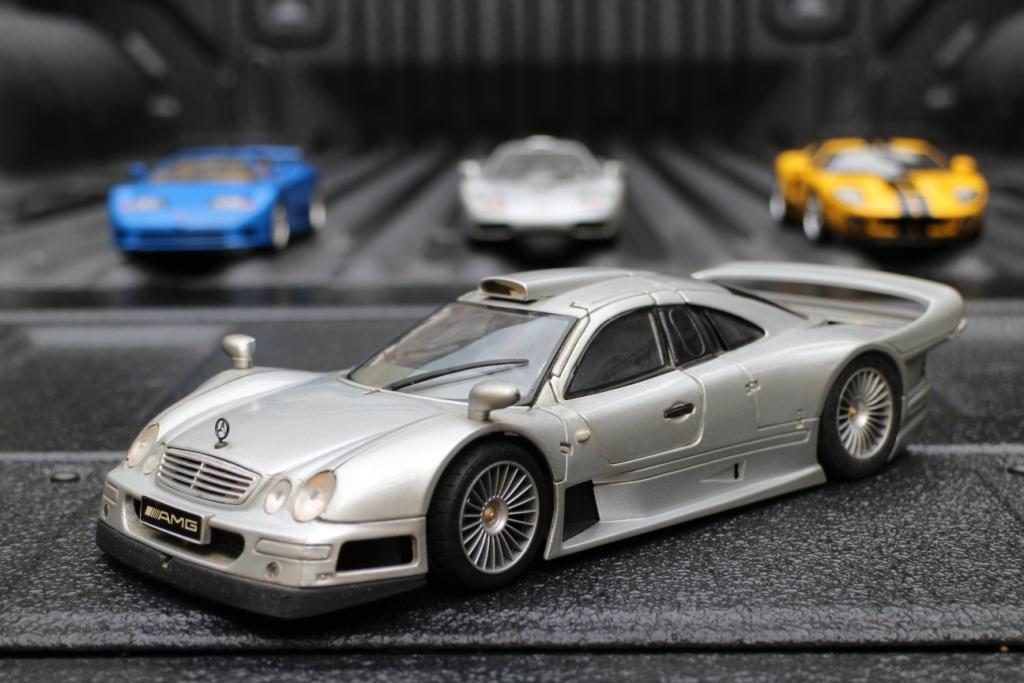 There was minimum driver comfort and refinements because Mercedes-Benz not only wanted to offer customers a true race car but also wanted to keep the price low. In addition to the upholstered interior, air conditioning, and two small storage lockers under each door, traction control was also added for driver safety. 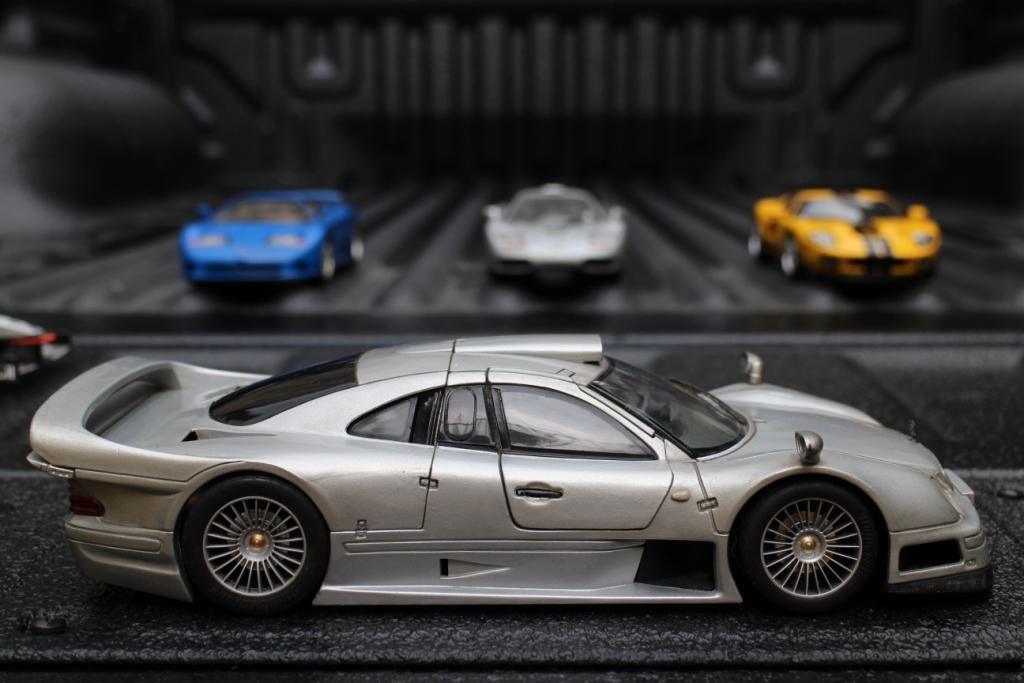 The CLK GTR road car retained much of the design of the race car, including the V12 engine and many design elements, while sharing the instrumentation, front grille, rear lights and the quad-headlamps of the production Mercedes-Benz CLK. Mercedes-AMG claimed a zero to 100 km/h acceleration time of 3.8 seconds and a top speed of 344 km/h. The Guinness Book of World Records recorded the CLK GTR as the most expensive production car ever built at the time, with a price of US$1,547,620. 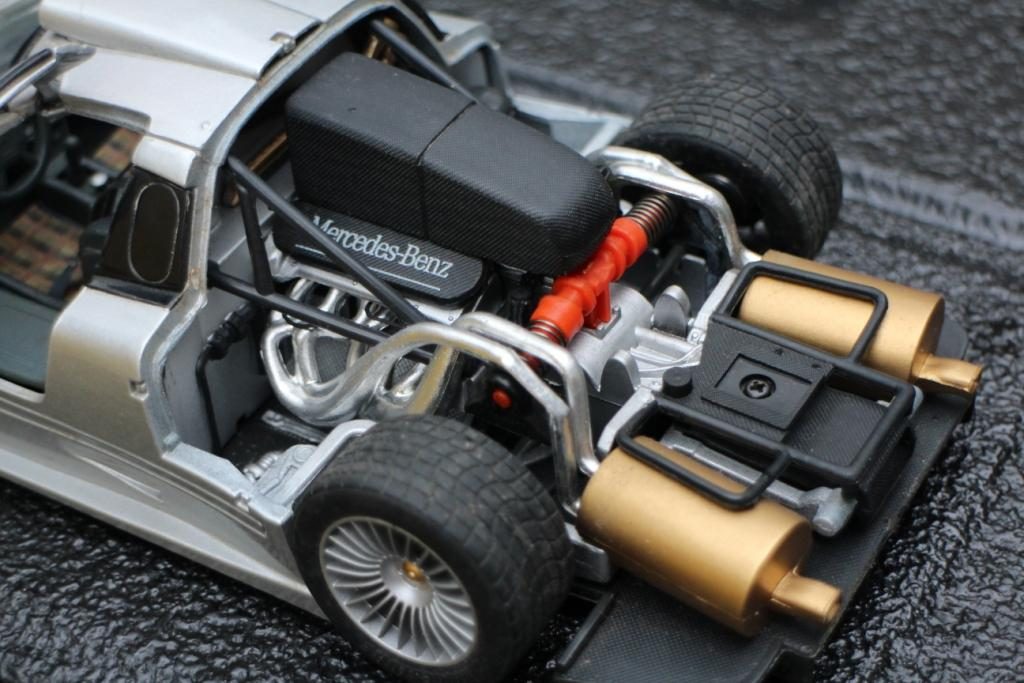 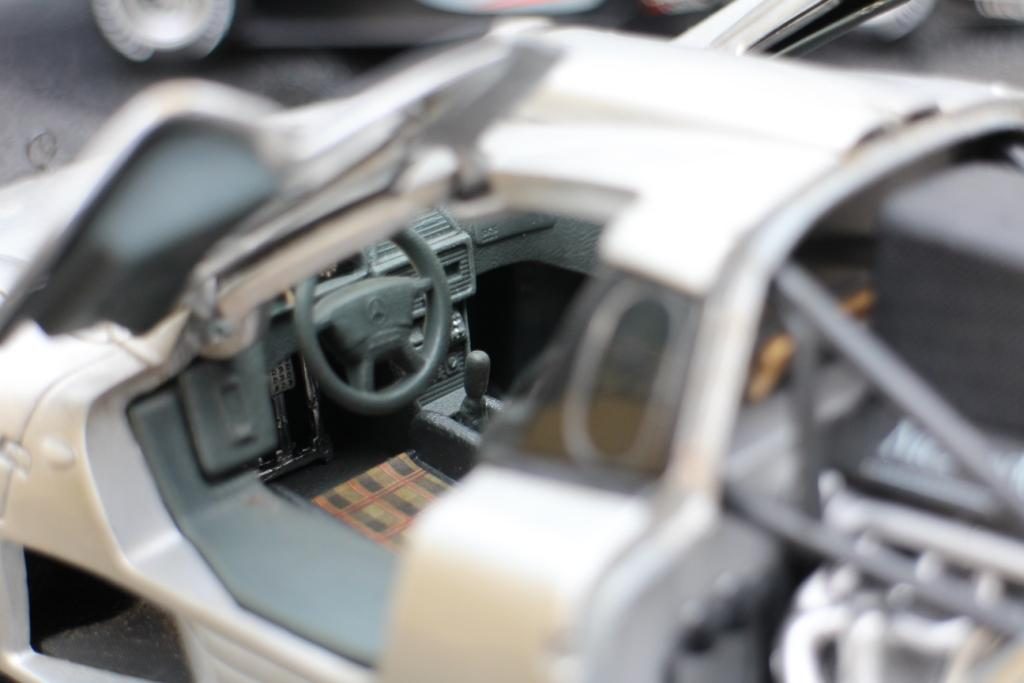 We can only guess that Maisto must have probably made a miniature of CLK GTR Prototype #1 in their Thailand factory judging by the tartan interior that our 1:18 scale die-cast model has. Its silver paint has weathered quite well despite the 20-plus years that we’ve owned this model car. 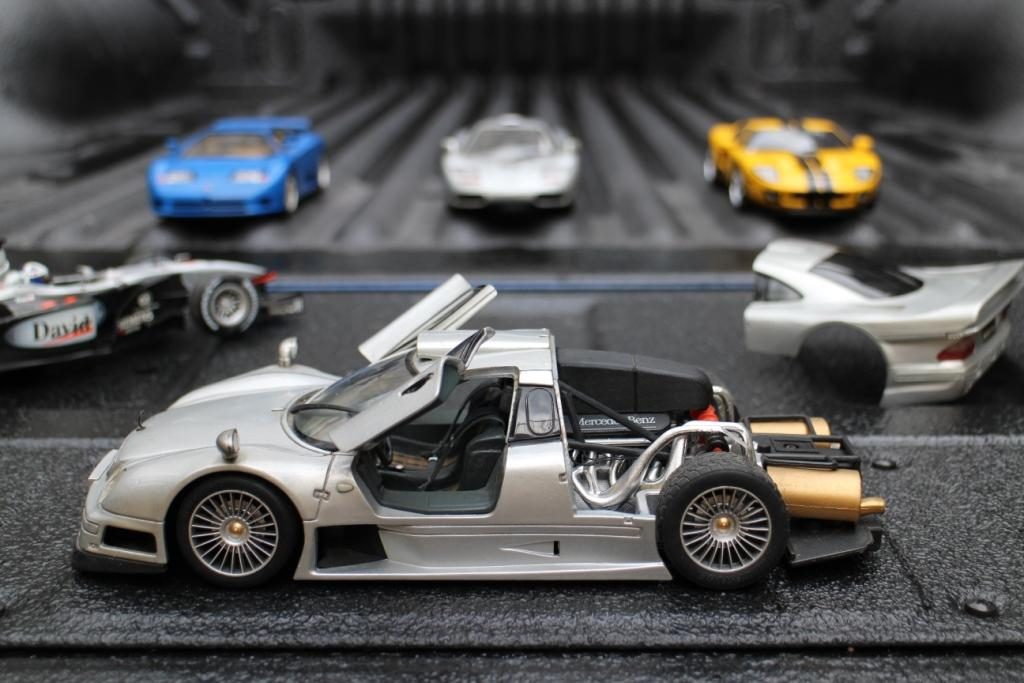 Upon closer inspection, we appreciated the Maisto’s attempt to add more details to the wheels by embossing “Bridgestone” (the series tire sponsor) on the sidewalls of the rubber tire. The model car is quite weighty and the removable rear panel locks with a reassuring “click” to ensure that it will stay locked with the car when you view it. 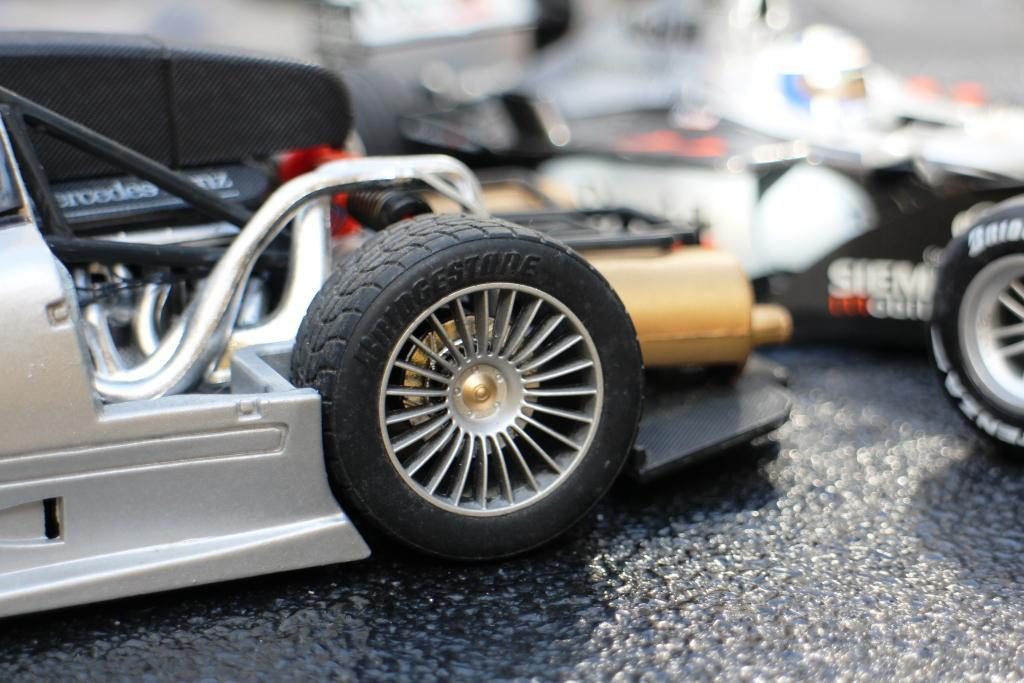 When we bought it cheap in the late early 2000s from a collector friend who was reducing his collection of 1:18 scale models, this silver CLK GTR was the least loved among his toys. We cleaned it up, realized that one of the side mirror lenses was missing, but still took care of it like we bought it brand-new. Now that it’s a hard-to-find scale model, we’re happy that we have one on our display shelf, especially since we have an actual 1986 Mercedes-Benz 500SE (W126) in our garage. (Please click “Project Cars” at the top to see our W126.) 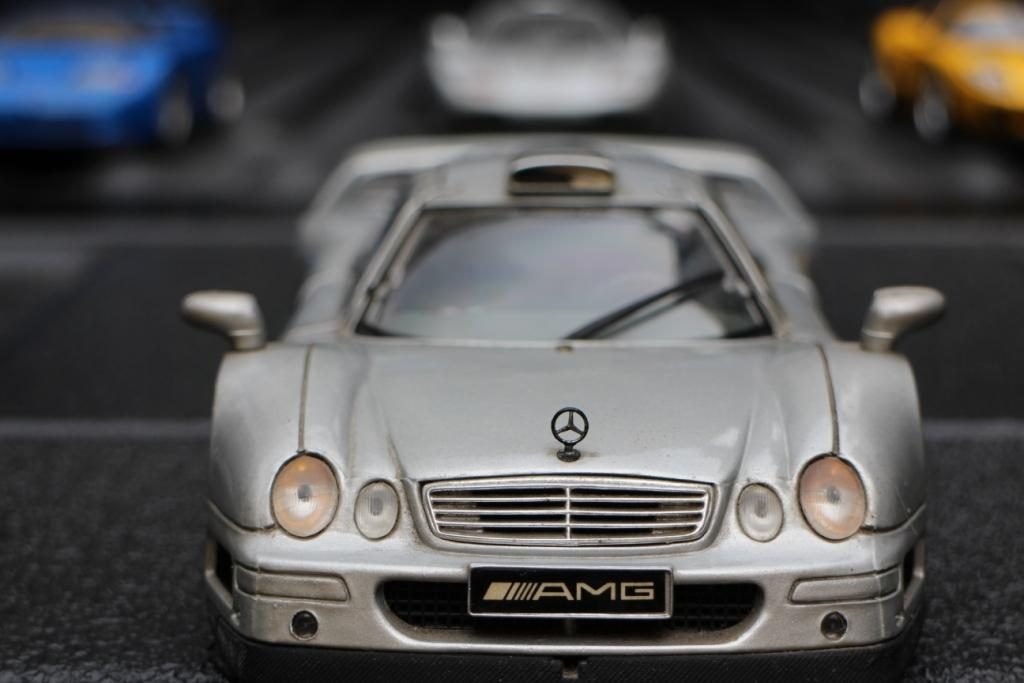 To review the scale model super cars that we have previously posted here in the Power Wheels website, please click “The Rack” button on the header bar near the top right of your screen (if you’re using a PC, laptop or tablet), or type “The Rack” on the Search bar if you’re using a mobile phone. After European super cars, we’ll feature an American super car with European origins. Bis morgen! 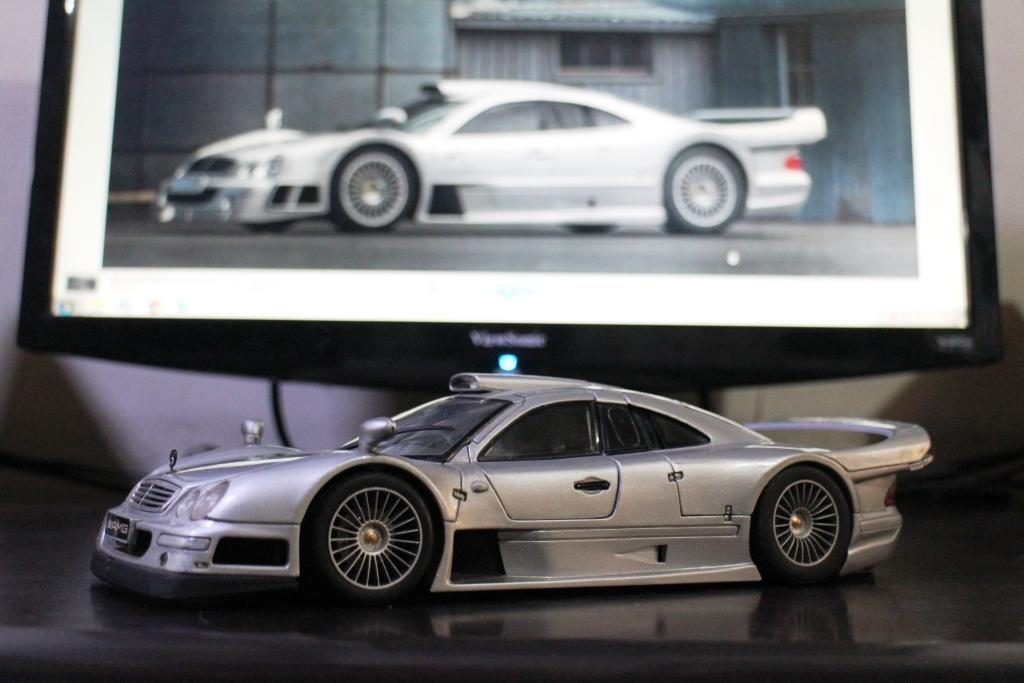