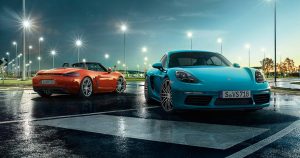 Ever since I was a car-crazed little boy, I’ve always dreamed of driving a two-seat mid-engine sports car. I grew up fantasizing about the Lamborghini Miura and Countach, the Ferrari 246 Dino, 365 Berlineta Boxer and 512 Testarossa, the DeTomaso Pantera, the Maserati Khamsin and Merak, and the Lotus Espirit. I always thought of mid-engine sports cars as exotic and expensive automobiles but impractical for everyday use because of their aggressive behavior and conspicuous fuel consumption. I surmised that only the wealthy elite could afford to own and maintain these fantastic vehicles. But I continued to dream. 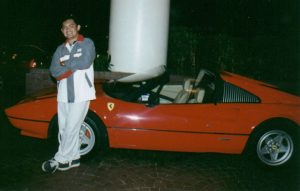 When I was in my late 20’s, I finally realized my dream when a mechanic-friend asked me to drive a 1979 Ferrari 308GTB that he was working on. My two-seat mid-engine experience continued further with short drives in Ferraris owned by rich friends and a longer drive in a 1988 Toyota MR2 that I debugged for my father-in-law. Although not as exotic as the Ferraris, the MR2 made me realize that a two-seat mid-engine sports car can also be affordable and practical. 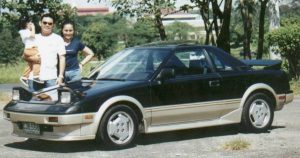 I have to admit, I wasn’t a big fan of the first-generation Porsche Boxster (Type 986) when it was introduced in 1996. For one, it shared a lot of components with the 911 (Type 996), including the first liquid-cooled flat-six engine. A lot of die-hard Porsche enthusiasts at that time, myself included, felt that a real Porsche should have its boxer motor at the rear instead of the middle. However, the international motoring press wrote praises about the Boxster’s handling, which is inherent of mid-engine cars, as they did when the first-generation Cayman bowed in 2005. 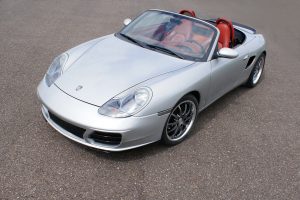 I had a change of heart during the 2012 Porsche World Roadshow when I drove a Porsche Boxster (Type 987) for the first time. I drove it fast on the race track of the Clark International Speedway and was immediately impressed with its poise, handling, and balance. I also had the opportunity to drive the Boxster on the streets and avenues around the former US Air Force base where it exhibited excellent road manners and everyday driving comfort.  Even though I  was getting hooked with the Boxster, I felt that the 911 (Type 997) was still the flat-six Porsche to have.

The Porsche World Roadshow returned to the Philippines in 2015 and again, I was impressed with the updated Boxster (Type 981), which got a new lightweight body and revamped chassis in 2013. I drove a Boxster GTS on the race track and was floored with the experience. The GTS variant was the most powerful Boxster and Cayman models during that time and it showed. Suddenly, the two-seat mid-engine Porsche became a supercar in my eyes. It even became more super when we drove around Clark City to experience the streetability of the Boxster/Cayman siblings. 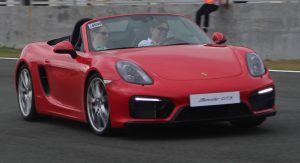 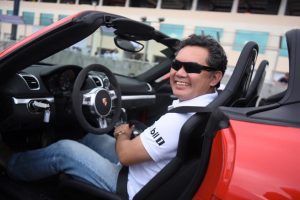 The author gives a big smile after an exhilarating drive of the Type 981 Boxster.

The Best Keeps Getting Better

However, when Zuffenhausen introduced the Porsche 718 Boxster and Cayman (Type 982), I felt that the factory finally created a delineation between the “entry-level” Boxster/Cayman models with their new turbo flat-four and the “upmarket” 911 models with the traditional flat-six, which is likewise turbocharged for power and efficiency. In my mind, the 718 has become more than just an entry-level Porsche. It has turned into a proper two-seat mid-engine sports car, and a practical one at that. 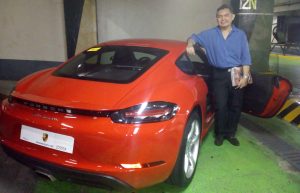 Let’s start with 718 Cayman. Its two-door fastback/hatchback body is as rigid as the Porsche 918 supercar. Its rear hatch opens to a spacious and carpeted storage parcel while the front trunk can swallow a couple of luggage for those week-long getaways. Its “hidden” mid-mounted 2.0-liter turbocharged flat-four engine is hard to find underneath all its covers, but you’ll know it’s there when you step on the throttle. With 300 horsepower and 380 Newton-meters of maximum torque, it propels our 7-speed automatic PDK-equipped 718 Cayman from 0 to 100 km/h in just 4.7 seconds. 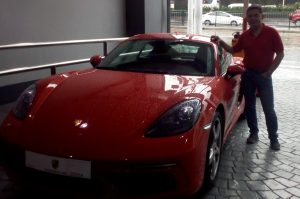 We had a wet test drive with the 718 Cayman.

It was raining heavily during our July test drive of the 718 Cayman so we weren’t able to test its limits. However, we felt that the fixed roof was a blessing, especially with our local climate where the weather changes from sunny to torrential in a minute.

However, for the ultimate wind-in-your-hair excitement, nothing beats driving a convertible sports car and the 718 Boxster delivers in spades. Powered by the same 300hp/380Nm turbo flat-four, it accelerates as hard and as fast as its fixed roof sibling but with the added delight of experiencing speed more intimately with the top down. 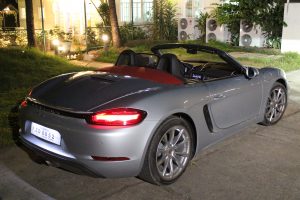 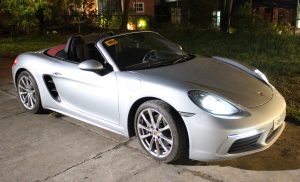 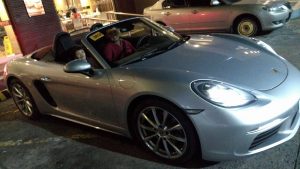 Mistaken for a D.I.: Author and his mother enjoying the 718 Boxster.

Both the 718 Boxster and the 718 Cayman feature an ergonomic interior that was designed to maximize the pleasure of driving a mid-engine sports car. The driver and passenger seats are comfortable and supportive whether the car is driven in a straight line or around curves. The interior feels sportier and more spacious with everything within easy reach. Both of the models we tested were equipped with the 7-speed Porsche Doppelkupplung (PDK) double clutch automatic transmissions with paddle shifters, which are a delight to use, especially when you’re driving at 10/10ths. An automatic Start/Stop feature saves fuel by turning the engine off during prolonged idling and on again when the driver removes his/her foot from the brake pedal. 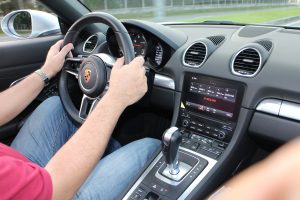 Interior of the Porsche 718 Boxster

Which One to Choose?

My favorite automotive writer, Peter Egan of Road & Track magazine, once wrote that he chided himself for not getting a Porsche Boxster earlier because it was “a revelation not only in driving one but in owning one”. After driving both Porsche 718 models, my thoughts turned to emulating Peter and which one I would pick as my daily driver, if by some stroke of good fortune, I could afford one or the other. In an ideal world, I’d like to have a 718 Boxster and enjoy the open air sports car experience. But with the pollution around the metropolis, with my hectic lifestyle, and with all the cats in our house that my daughter loves to take care of, I might have a difficult time maintaining its textile convertible top. 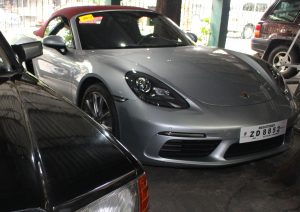 Textile convertible top might prove to be a maintenance challenge.

So, I guess I’ll have to be a practical realist and pick the Porsche 718 Cayman. Its fixed roof and low sporty shape is ideal for a two-seat mid-engine sports car that will be driven daily around town. It’s already powerful enough to leave all other cars behind but docile enough to dice with other vehicles in heavy traffic. Its turbo flat-four is an efficient combination of power and fuel-efficiency. And that, my dear friends, is what the world needs now, well, what my world needs, at least: a powerful but fuel-efficient, exotic but practical, two-seat mid-engine sports car attuned to reality. Make mine Guards Red, please. 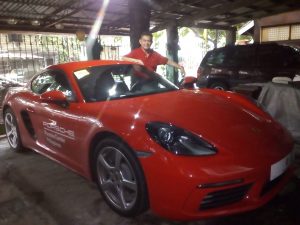 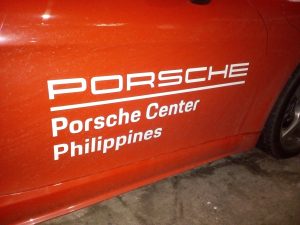 …if only the neighbors won’t see the markings on the door.