One-Two Finish for Porsche at the 24 Hours of Spa 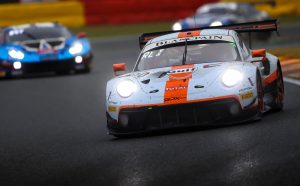 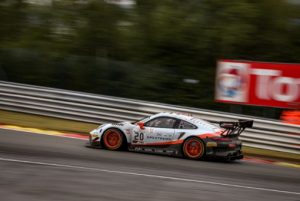 The Rowe Racing Porsche 911 GT3 R (#998) followed the GPX Racing Porsche (#20) into the finish line to round-off the one-two victory of the Porsche teams at the endurance marathon in the Ardennes. Five of the six Pro-cars from Porsche finished in the Top Ten during the 71st running of the 24 Hours of Spa held July 24-29, 2019. 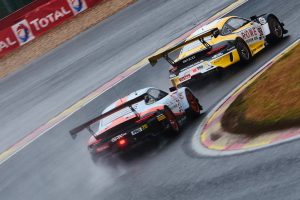 Right from the start, the rain played the leading role at the 24-hour classic in Belgium. In the early hours of Sunday morning, the race had to be stopped for almost six hours due to heavy downpours. But even this interruption couldn’t end the victorious drive of the #20 GPX Racing Porsche. The crew with Estre, Christensen, and Lietz, which had been relegated down the field by a drive-through penalty in the evening, put in an impressive charge throughout the race. When the race was halted, the driver trio had made it back to eighth place with a series of flawless and constantly fast stints and made up more positions after the race was restarted. 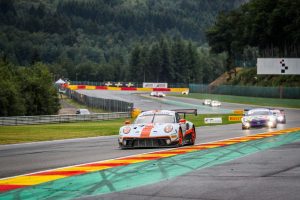 With two hours to go, the #20 GPX Racing Porsche driven by KévinEstre took the lead, which the Frenchman held driving the slick-shod car on a damp track surface. After nine years, it was time to celebrate again for Porsche at the prestigious endurance classic in the Ardennes. The #998 ROWE Porsche Racing 911 GT3 R shared by Nick Tandy, Patrick Pilet and Frederic Makowiecki completed a fine run to second, with the #4 Mercedes-AMG of Marco Engel, Luca Stolz and Yelmer Buurman third after an outstanding showing. 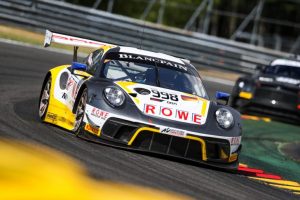 Audi Sport Team Sainteloc was fourth, a repeat of last year’s result for Markus Winkelhock, Christopher Haase and Frederic Vervisch. Another ROWE Porsche was fifth thanks to Romain Dumas, Mathieu Jaminet and Sven Müller, while Honda scored a superb sixth-place finish from 33rd on the grid with its lone Pro class NSX GT3. 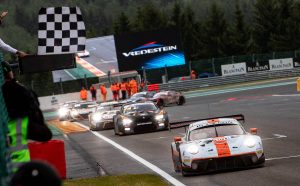 Porsche Motorsport Vice President Fritz Enzinger was ecstatic. “Congratulations to our customer teams at Spa. The effort of the engineers, strategists, the pit crews, and the drivers impressed me deeply. They all co-operated with our support crew from Weissach in the best possible way. We’ve scored this victory together. And the Porsche 911 again proved to be the car to beat at sports car races.” 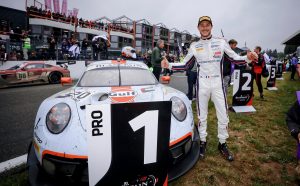 “This was another typically crazy race at Spa. We had to master various weather conditions and aquaplaning. With tough wheel-to-wheel racing we conquered one position after the other, we were on slicks in the rain and on wets on the drying track. During the last 30 minutes of the race there were yellow and safety car phases – the way to our victory was truly a tough piece of work. But after the race was halted in the morning we were confident to have the right strategy to make it to the top. I am proud of our team that only started the co-operation with Porsche this year. And I am proud to be a member of this squad,” stated Kévin Estre. 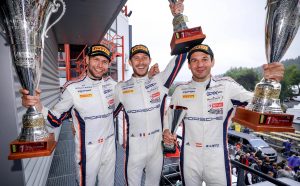 248 drivers took up the 24 hour classic at Spa-Francorchamps in 72 cars. Eleven marques were represented at the 71st running of the Ardennes marathon which is regarded the world’s most important GT3 event. 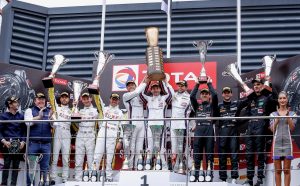