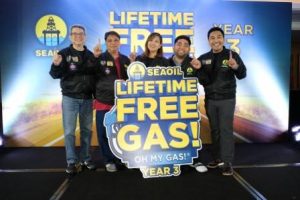 SEAOIL, the leading independent fuel provider in the Philippines, launched the third year of their unique and exclusive “Lifetime Free Gas, Oh My Gas!” promo on July 16, 2019 at the Shangri-La Hotel in Makati. SEAOIL will be giving away a lifetime supply of free gas to 4 lucky motorists starting this July in their promo that continues to be the only one of its kind in the world.  “Following our success from the past two years of the ‘Lifetime Free Gas’ promo, we want to continue this giveaway to thank our loyal customers for their continued patronage of SEAOIL. The response has been overwhelming and we are more than happy to return with it for a third year”, said SEAOIL CEO Glenn Yu. 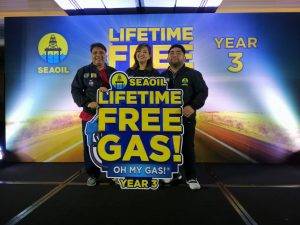 To qualify for the promo, a customer must gas up at least P500 worth of Extreme 97, Extreme 95, Extreme U, Extreme Diesel fuels and/or SEAOIL lubricants at any SEAOIL service station nationwide. Customers can double their chances of winning when they register at www.lifetimefreegas.com. Customers will receive raffle coupons that they can drop at the drop boxes in the station. They can also expect to win over 100,000 instant prizes through peel-off cards. A total of half a million worth of SEAOIL gift cards will be raffled off in monthly draws. The “Lifetime Free Gas, Oh My Gas!” promo runs from July 18 to October 18, 2019. Winners of this year’s promo will be determined via electronic monthly draws in August, September, and November, and a drop box raffle draw in November. 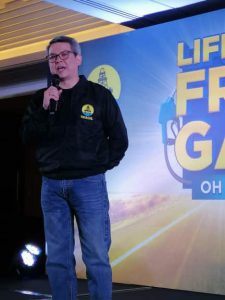 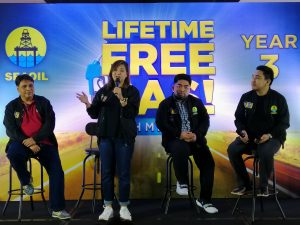 The eight winners of the promo from the past two years came from different walks of life. Three of the previous winners who are currently enjoying free gas for their lifetime attended the launch event to share their experiences and how winning the promo has changed and improved their lives. The first ever winner of the promo was Monica Poliquit, a mother of five kids. She shared that their family budget that used to go to fueling up their Hyundai Starex is now used for the needs of her kids. She’s happy to use the fuel for trips with her family and to share the blessing with her family and community members who need fuel. Dedicated Iloilo businessman Jeffrey Olasa confessed that he has consumed most of the free gas he gets from SEAOIL in his business to go the extra mile and deliver to his customers. The youngest of the winners was 24-year-old Michael Sulit, a SEAOIL user ever since he bought his own car. He shared that he uses his free fuel for field work and trips with family and friends and shares it with his siblings who have families of their own. He said that the money he saved from his free fuel went into getting a Master’s Degree and he’s thankful to SEAOIL for helping him move towards fulfilling his dreams. 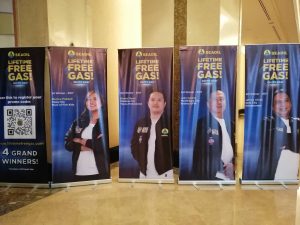 The previous eight winners came from all walks of life and are SEAOIL Believers.

Aside from Michael Sulit, winners from the 2018 Lifetime Free Gas, Oh My Gas! promo include Ernie Linarez, a TNVS operator and driver from Rizal, who is thankful that his monthly fuel savings help pay for his car loan; Joel Dinque, an entrepreneur from North Cotabato who is able to provide more for his family, thanks to his fuel savings; and Jidy Detuya, a jeepney driver from Agusan del Norte, who was convinced by one of his kids to gas up at SEAOIL and try his luck at winning free gas. Gerard Davis, a young professional from Marikina City, was the second winner in 2017 after Monica Poliquit while Julio Carpio of Muntinlupa City, a retired overseas Filipino worker (OFW) and a senior citizen, was the third. During the event, SEAOIL raffled off P15,000 worth of free fuel to four lucky attendees and one of them was our very own Shawie Dizon. Oh, My Gas! 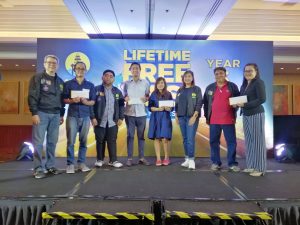 Our very own Shawie Dizon (leftmost) won P15,000 worth of fuel raffled off during the launch.

This is the only promo in the world that gives winners a lifetime supply of free fuel.  Now on its third year, it is SEAOIL’s continued way of saying thank you to its customers. In addition to four winners of lifetime free fuel, SEAOIL will also draw 45 winners of P10,000 worth of SEAOIL GCs. Fifteen of which are exclusive to SEAOIL VIP Club members. Over 100,000 instant prizes are also up for grabs through peel-off cards attached to the raffle coupons. Customers can double their chances of winning in the raffle draws if they register their entries online at www.lifetimefreegas.com.

Coming from the success and positive reception of the promo these past two years, SEAOIL would like to thank its customers for their continued support and patronage.

SEAOIL has awarded eight winners over the past two years who were each given lifetime supply of fuel.

Aside from the chance to win one of the four Lifetime Free Gas, Oh My Gas! major prizes, customers may also win one of the forty-five (45) P10,000 worth of SEAOIL gift cards, and over 100,000  instant prizes such as P10, P50, and P100 discounts on SEAOIL fuels, and 1 liter of SEAOIL Gasoline Engine Oil or Diesel Engine Oil from “peel-off” cards attached to the raffle coupons.

So, what are you waiting for? Gas-up now at any SEAOIL service station and get a chance to win a lifetime worth of free gas! Oh, My Gas! 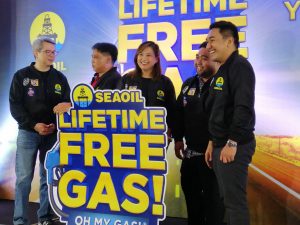 See the big smiles on their happy faces? That’s because they have a lifetime supply of free gas! Join now and you may be one of them soon!