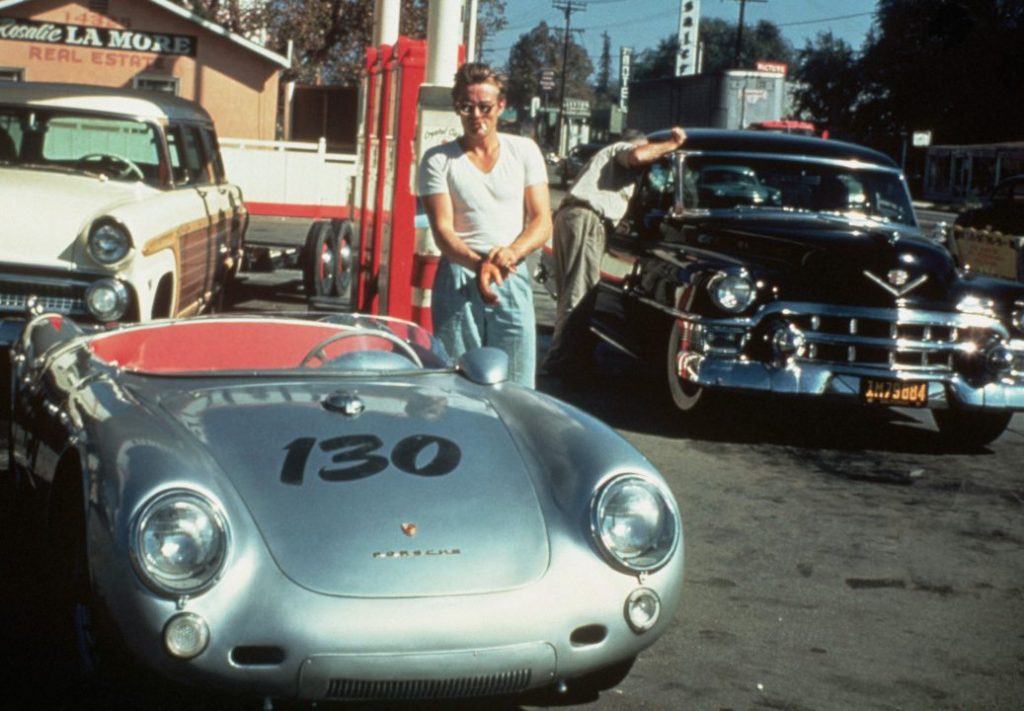 The iconic 1953-56 Porsche 550 Spyder is often associated with the late American actor and Hollywood icon James Dean. It seems that glamour, speed and danger are part of the racing sports car’s mystique. 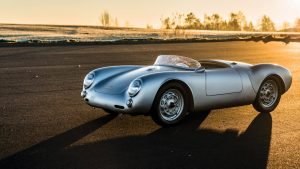 For the benefit of those who are not in the know, the Porsche 550 is a mid-engine car with an air-cooled horizontally-opposed 4-cylinder engine. It followed the layout of the 1948 Porsche 356-001, which we featured here last Tuesday, May 26, 2020. The advantages of its mid-engine layout led the Porsche 550 to become the dominant design for top-level racing cars by the mid-1960s. Only 90 Porsche 550s were produced but it dominated the 1.1-liter and 1.5- liter racing classes. 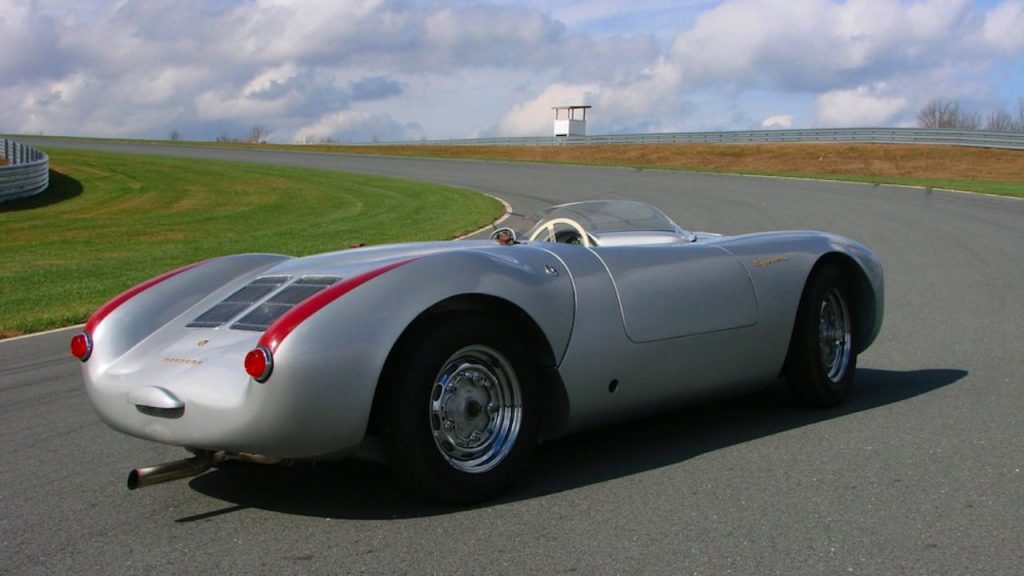 Known internally as “Typ 550/550A”, this Porsche is powered by an all-aluminum naturally-aspirated 1,498 cc air-cooled “Fuhrmann” boxer engine.  The double overhead camshafts (DOHC) on each cylinder bank control two valves per cylinder and are driven by vertical shafts. Twin 2-barrel Solex downdraft carburetors, dual ignition, and two gasifiers help the Fuhrmann engine develop 108 hp at 6,200 rpm and 121 Nm of torque at 5,000 rpm. 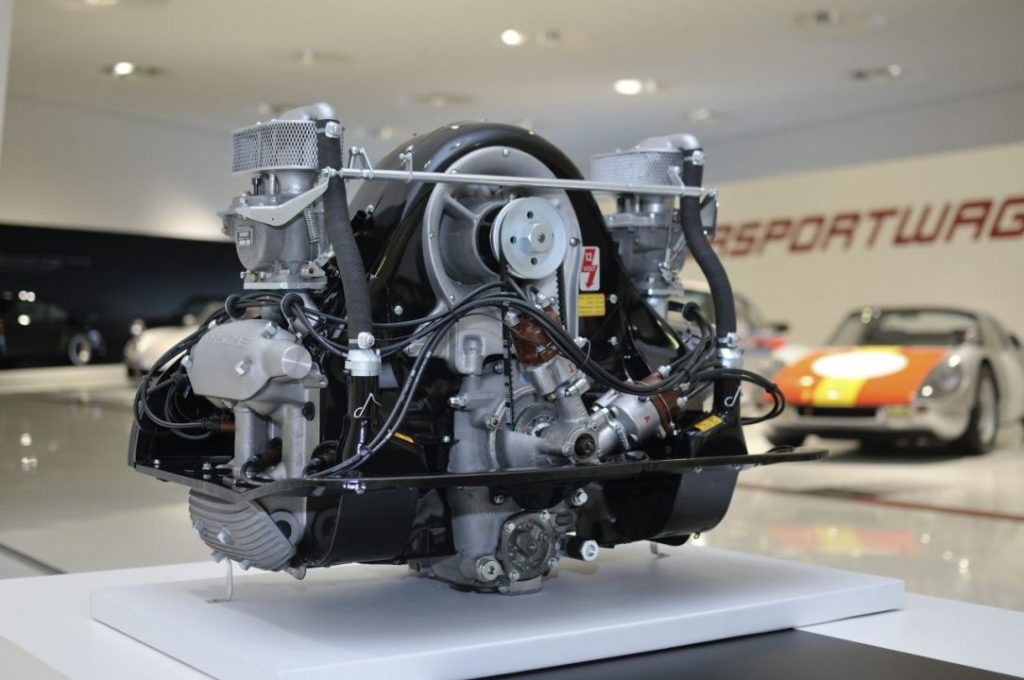 The 1953-55 Porsche 550s had fully-synchronized 4-speed manual transmissions while the 1956 model had a 5-speed gearbox. A limited slip differential was installed in all year-models to prevent excessive drive wheel slip around fast corners. While the mid-engine layout gives it a more balanced weight distribution and allows for largely neutral handling, the 550 has a tendency to go into a sudden, difficult-to-control rotation around a corner, especially when driven by amateurs. 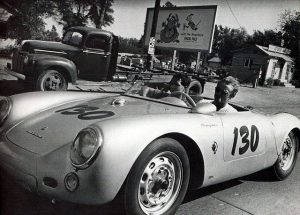 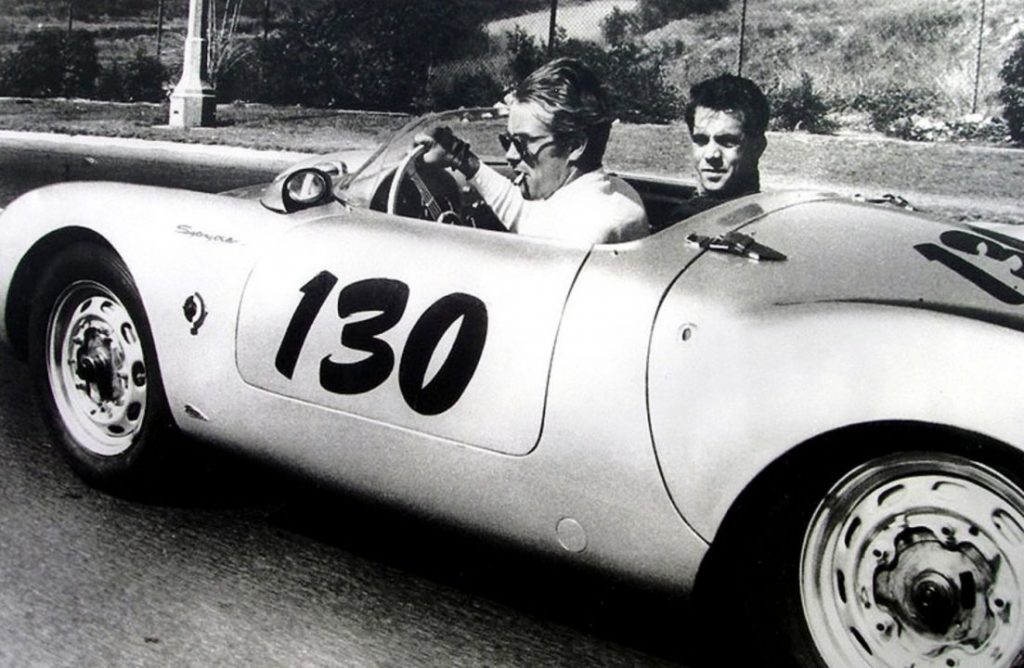 James Dean’s racing sports car was number 55 of the 90 Porsche 550s built. He traded in his Porsche 356 Speedster for the new 1955 Porsche 550 Spyder on September 21, 1955 and signed up for the Salinas Road Race scheduled for October 1st and 2nd. Custom car painter Dean Jeffries painted the number 130 on the front hood, doors and rear deck lid and the words “Little Bastard” across the rear cowling. James Dean never made it to Salinas after his 550 crashed into another car at the Cholame Junction on September 30, 1955. 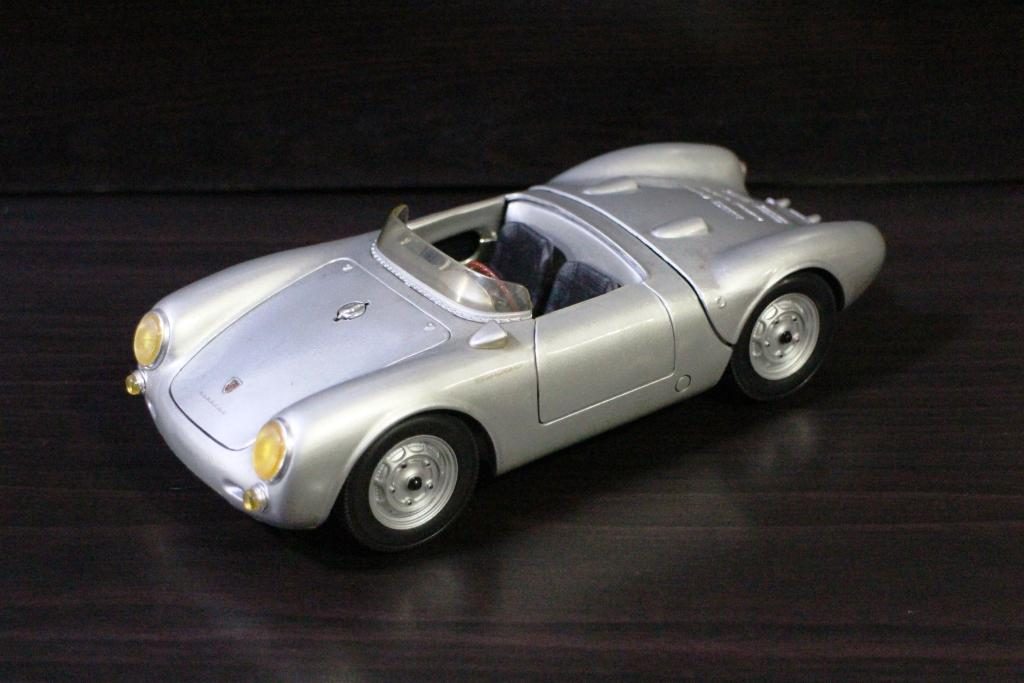 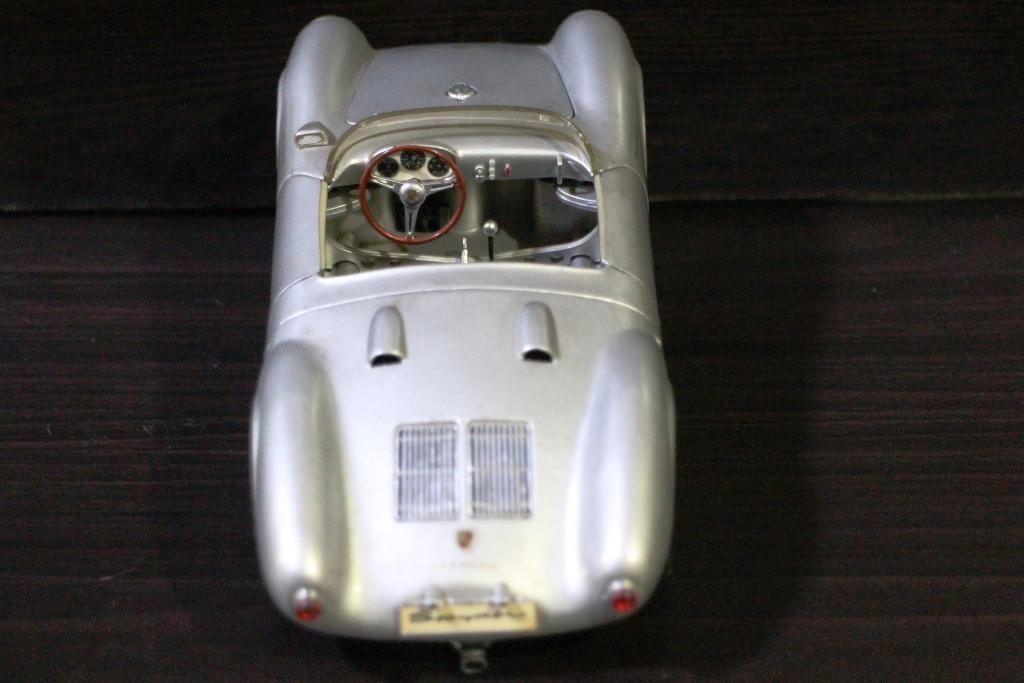 Maisto labeled our metallic silver 1:18 scale die-cast model car as a “Porsche 550A Spyder” and equipped it with opening doors to showcase the bare lightweight racing interior with a wood-rimmed 3-spoke steering wheel and black bucket seats. 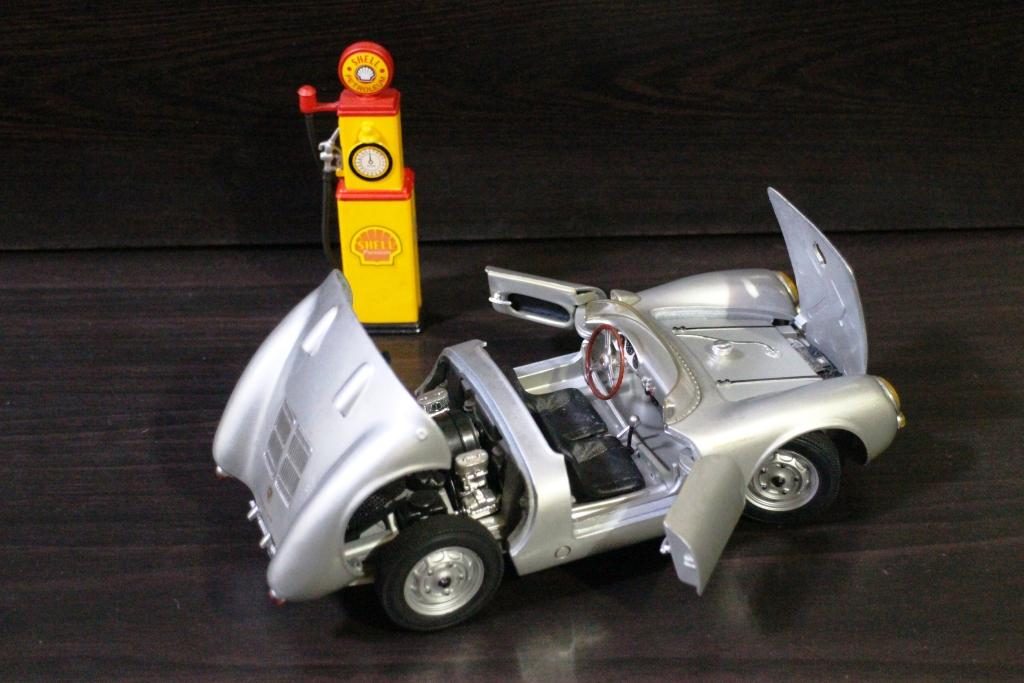 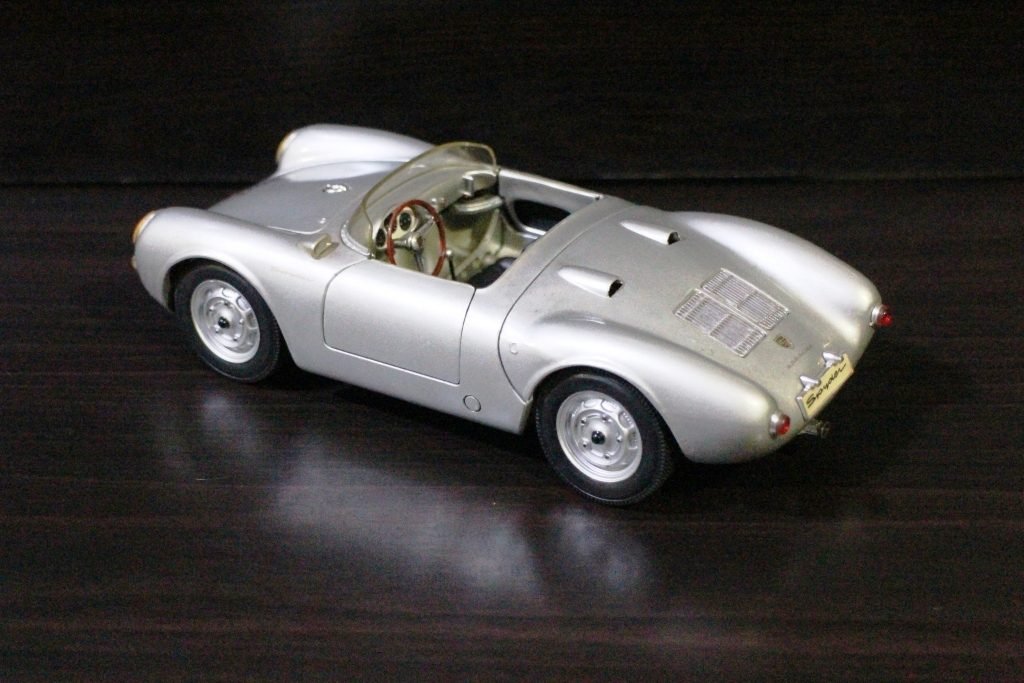 The front hood opens to reveal the large fuel cell with the filler that is accessible through a hole in the hood. The rear bodywork opens clamshell-style to show the Fuhrmann boxer engine just behind the passenger tub and a spare tire that is latched to the frame by belt straps. 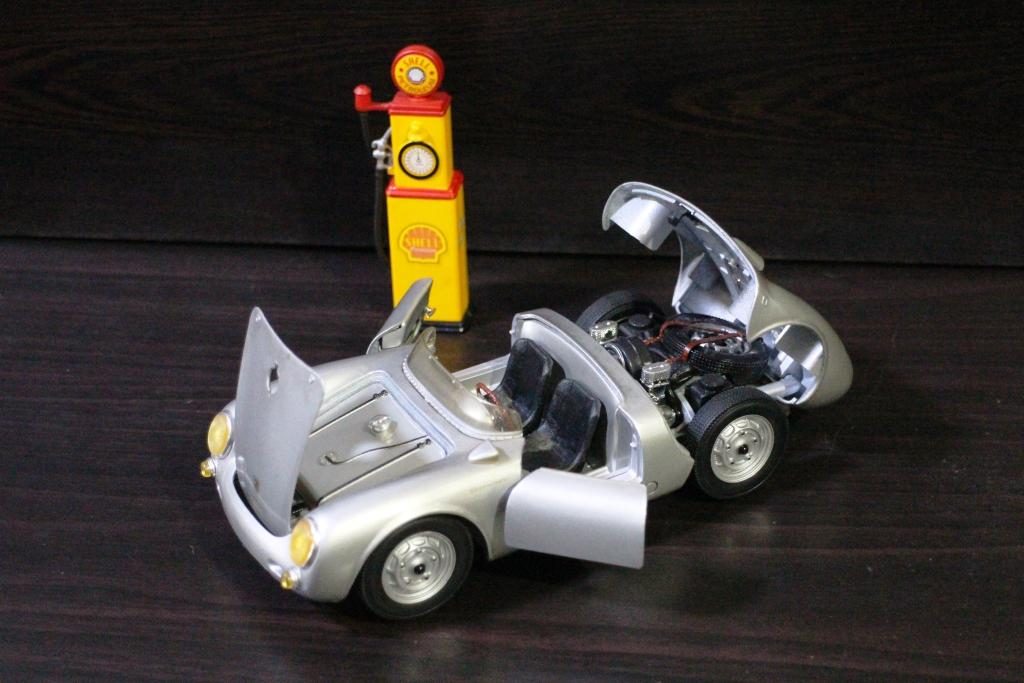 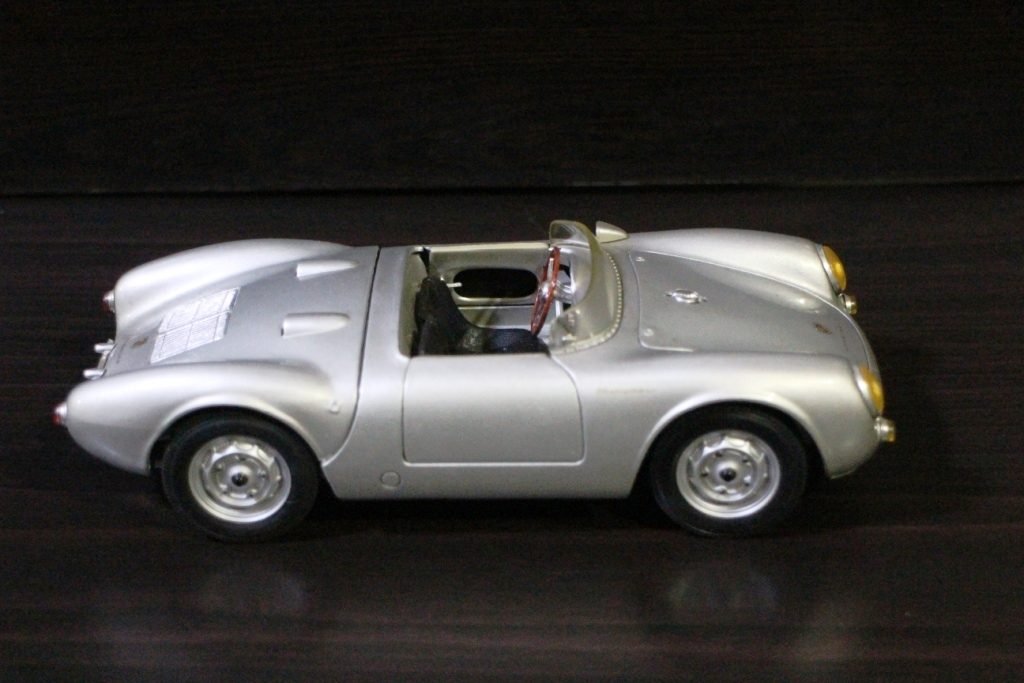 It would be tempting to add a few more details like the red racing stripes and the “Little Bastard” script at the rear cowl, the number “130” around the car, the red seats and the white steering wheel to make this a replica of James Dean’s 550 Spyder. But there are 1:18 scale model replicas of the Little Bastard that you don’t need to modify this one. We’re still scouring for a James Dean 550 Spyder to complement ours. Would you know where we can get one? 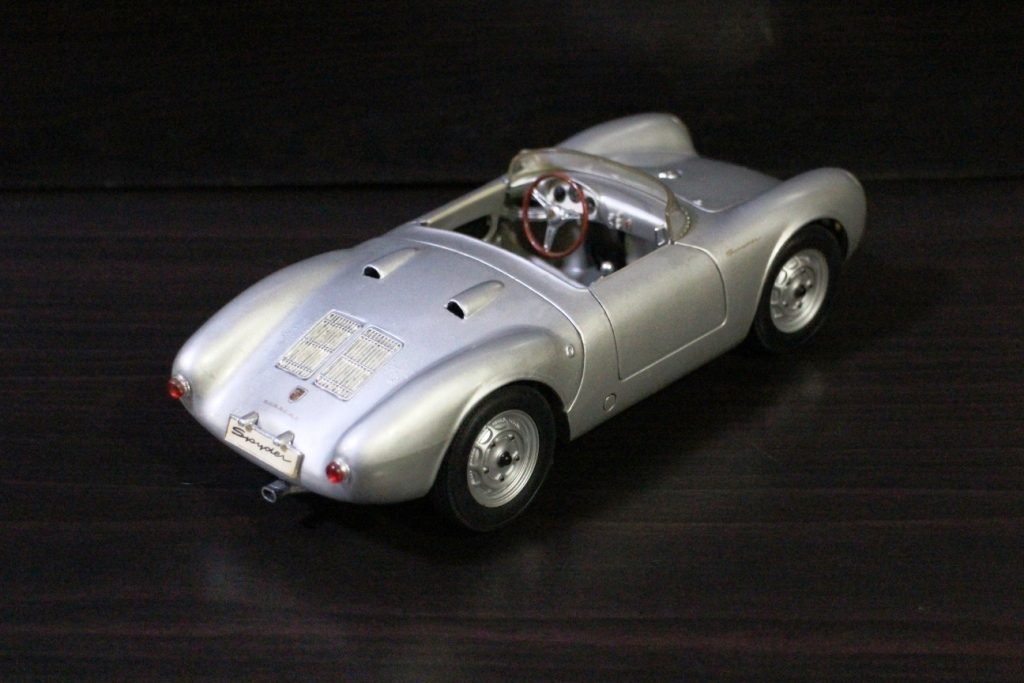 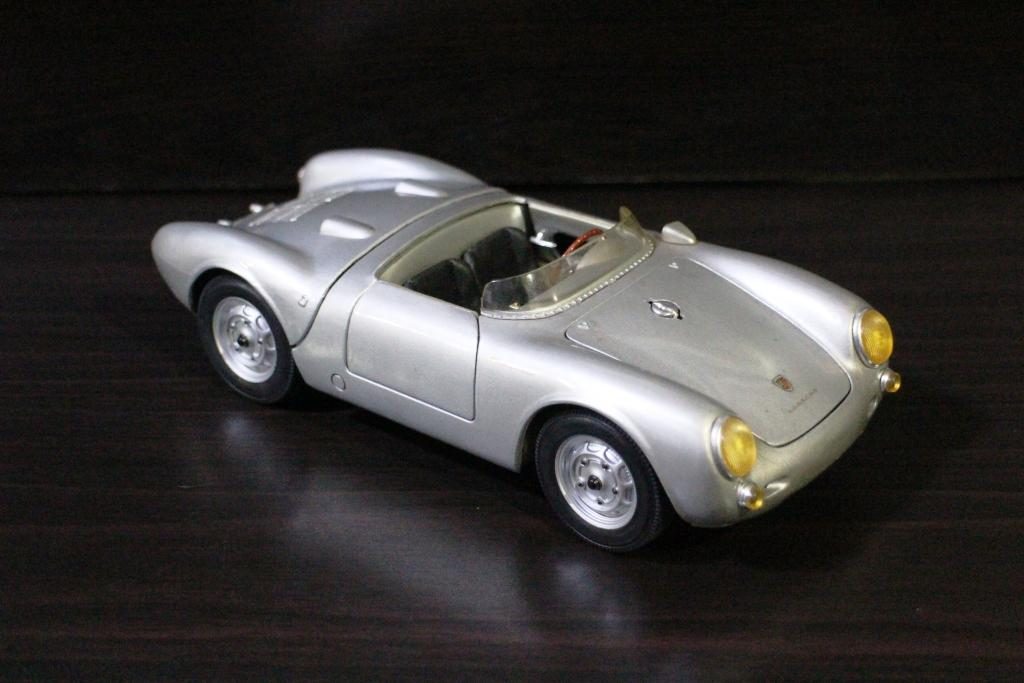 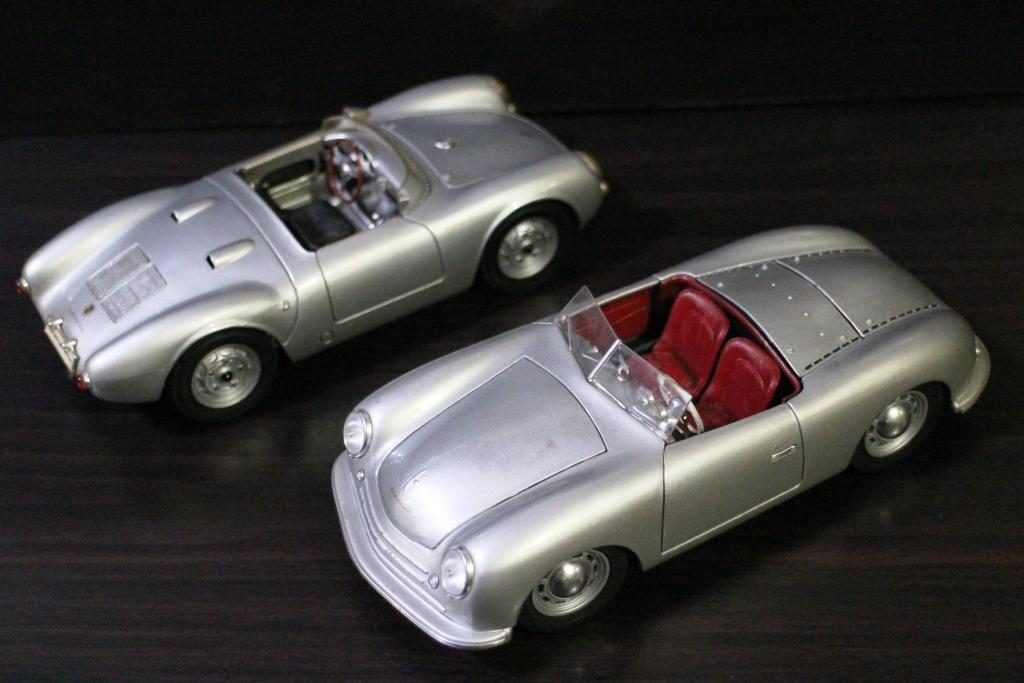 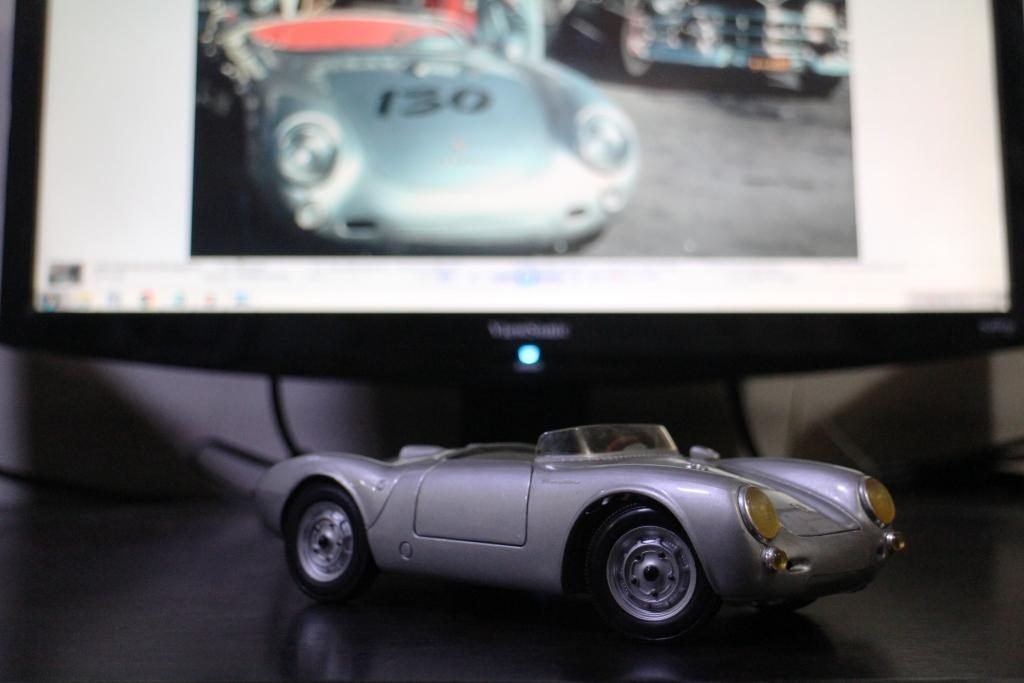