So, there I was, sitting in the back seat in one of the 10 brand-new Kia Seltos as we took off from Capitol Commons in Pasig City to our day drive to the surfing Mecca that is Baler in Quezon Province. Assigned to take us out of the city in our Seltos was a lady driver, Arabelle Jimenez, and it was a welcome respite for myself and the two other gentlemen in our test vehicle, Monch Henares (Monchter Chronicles and DZRH Kaya Mo Yan) and Kevin Bruce Francisco (Power Wheels TV-Cruise Control), especially after driving around day-in and day-out in horrendous Metro Manila traffic. 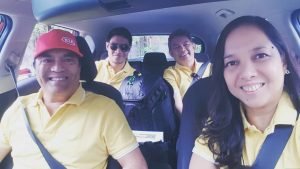 Our motley crew inside the Kia Seltos. (Photo courtesy of Arabelle Jimenez.)

The drive was Kia Philippines’ way of celebrating its 1st Anniversary after the Korean car brand started its local operations under the umbrella of AC Motors of the Ayala Corporation. It was also their way of thanking the local motoring media for helping the brand achieve a staggering 124% growth in 2019. Kia Philippines President Manny Aligada joined the media contingent, “crossing over” from one Seltos crossover vehicle to another, during the drive through the North Luzon Expressway (NLEX), Subic-Clark-Tarlac Expressway (SCTEX), across Nueva Ecija and the Sierra Madre mountain ranges to the Costa Pacifica Resort in Baler, Quezon. 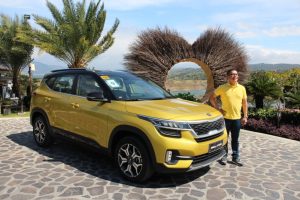 In city traffic and on the expressways, the Kia Seltos proved to be agile, fuel-efficient, and quick. The backseat was a good place to be when crawling in traffic and the rear seat back reclines a bit (26 to 32 degrees) to add more comfort. Rear legroom was surprisingly good, especially considering that there was space in the back for luggage and that the guy seated beside me, Kevin, is a tall guy who bought a lot of video equipment. With Arabelle’s smooth driving, I felt like a wealthy publisher being chauffeured around inside the spacious Seltos, albeit along with my staff and their stuff. 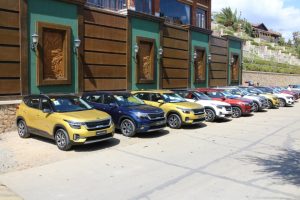 Our convoy of 10 Kia Seltos parked during our lunch stop at Bali Highlands in Nueva Ecija.

Monch swapped seats with Arabelle somewhere along SCTEX and drove until our lunch stop at the Bali Highlands in Nueva Ecija adjacent to the Pantabangan Dam reservoir. The water level at the reservoir was worryingly low because of the lack of rains and the high water consumption of the growing metropolis that are supplied by the dam. A quick glance at the fuel gauge of our Seltos showed the opposite. The needle still pointed towards the higher portion of the fuel gauge despite our long drive and Monch’s fast driving style that pushed our Seltos’ 2.0-liter Dual CVVT-equipped inline 4-cylinder Atkinson-cycle motor to harness most of its 147 horses, which peaks at 6,200 rpm. 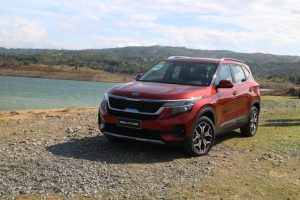 The low water level at the Pantabangan Dam was a reminder to conserve our natural resources.

I was still enjoying the backseat when it became my turn to drive, so I asked Kevin to take my turn instead and he obliged almost immediately. Kevin enjoyed the Seltos’s 179 Newton-meters of torque at 4,500 rpm, which the continuously variable transmission (CVT) or Intelligent Variable Transmission with Drive Mode Select multiplied according to the demands of the drive. The engine-transmission combo was always in sync and allowed Kevin to enjoy a bit of fun out on the curves and the zigzags along the mountain pass. 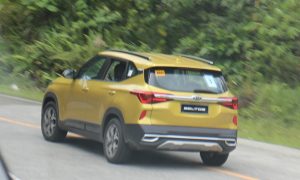 The Seltos attacked the curves of the Sierra Madres with confident tenacity.

Meanwhile, Monch and I were playing our favorite hits from the ‘60s, ‘70s and ‘80s with the Seltos’ large 8-inch infotainment system, which came with Apple CarPlay and Android Auto that allowed it to connect with multiple devices. Being old school, I stored my music in a small USB stick while Kevin and Monch connected their mobile devices via Bluetooth. When we finally got to Baler past 4 in the afternoon, I jested that Kevin’s hair turned a bit gray because of the old music and old jokes in our vehicle. But I think that the fun of driving the Seltos kept young Kevin youthful. 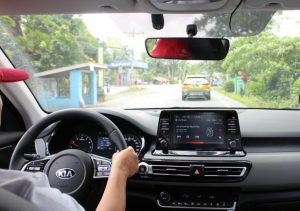 The Seltos placed every control within easy reach and driving it was such a joy.

After a fun and surprise-filled evening, we awoke next morning eager to drive other Seltos variants on the way back to Manila. We were not able to try the cruise control of the Seltos EX and SX variants because we were too excited with the driving but we were able to try the reverse camera for stress-free parking maneuvers. 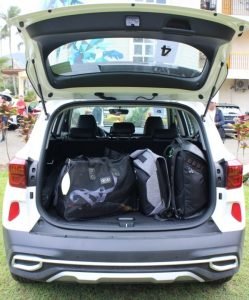 Room for five adults and for their stuff…

We took every opportunity to take photos and videos of our Seltos convoy, all ten of which were detailed with Sonax for extra shimmer. Of course, the signature “Tiger Nose” grille, which was penned by award-winning designer Peter Schreyer made the Seltos even more appealing to the cameras. 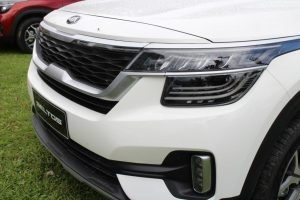 The Peter Schreyer-designed Tiger Nose grille, now the most recognized feature of every Kia automobile.

“The Seltos is the true embodiment of Kia Philippines’ new marketing tagline”, shared Kia Philippines President Manny Aligada.  The new marketing slogan “Designed for You” was developed locally to send a message that Kia has their customer’s needs in mind. During the drive to Baler and back, we felt that the new slogan was more than just a slogan. The Seltos was really designed for its intended market. 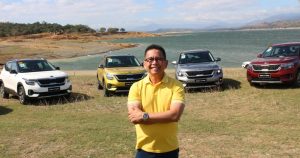 In fact, Kia Philippines designed the 2-day Kia Anniversary Drive to showcase its commitment of excellence for their Filipino customers and it got us convinced. Arabelle absolutely enjoyed driving the Seltos. The engineer in Monch was satisfied with the vehicle’s overall performance. Kevin began seriously considering the Seltos instead of another mini-SUV he was planning to purchase to replace his aging Japanese crossover vehicle. And I’m beginning to miss our old Kia Soul. 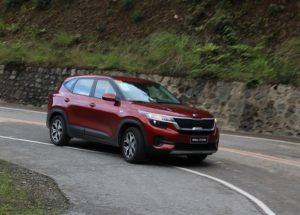 Most of the participants, including the author, enjoyed taking the Kia Seltos through its paces.

After riding and eventually, driving the new Kia Seltos, I felt an absence I cannot describe. I have a distinct feeling that my wife Shawie and I will soon be proud Kia owners once again. 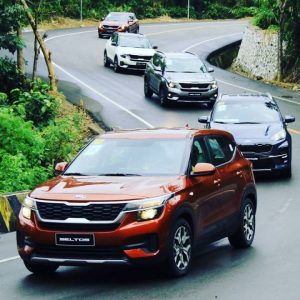 Our convoy of Kia Seltos gingerly traverses the mountain passes of Quezon. (Photo by Anjo Perez.)