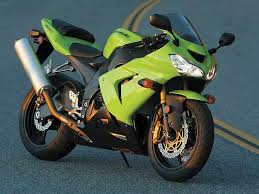 The Kawasaki Ninja ZX-10R debuted in 2004 as a compact, short wheelbase liter bike with a high power-to-weight ratio and handling that can rival a 600cc sport bike. After a successful three-year run, the ZX-10R underwent a drastic aesthetic change in 2008, and then underwent a major mechanical and styling overhaul in 2011. 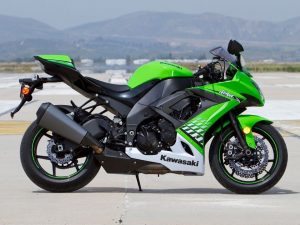 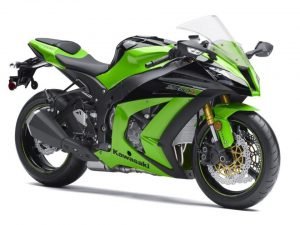 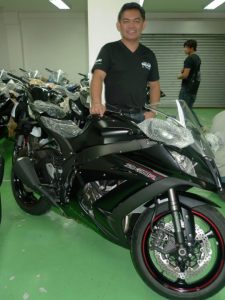 The author getting his brand-new 2013 ZX10-R from Kawasaki Krib in Libis, Quezon City.

My ZX-10R made me feel 20 years younger. Kawasaki quoted 187 horsepower as the “official” power output of the 16-valve, DOHC, liquid-cooled 998cc inline-4 motor, but foreign bike magazines quote around 207 hp when its Ram Air system feeds the intake manifold with pressurized air at speeds exceeding 100 km/h. Regardless of its true power output, my ZX-10R astounded me with its level of technology, reliability, handling, grip, and the intense feeling of having superior power with a twist of your right wrist. 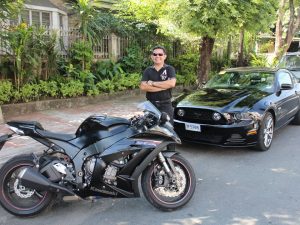 Obviously, black is the author’s favorite color and horsepower is his favorite high…

I was always intrigued by riders who boast of riding in excess of 200 km/h. I eventually did 250 km/h on my 2003 BMW R1100S Boxer Cup Replika and upped the ante when I hit 278 km/h on a 2013 Ducati 1199 Panigale at the Sepang International Circuit, but my black Ninja took me past 300 km/h, albeit briefly, and did so without any fuzz or pageantry. Its race-style 6-speed cassette transmission and an adjustable back-torque limiting clutch worked flawlessly every time. 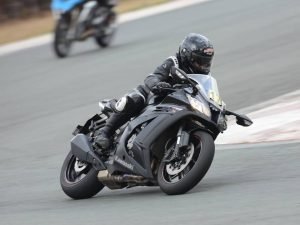 The author on his black Ninja at the Clark International Speedway.

For a couple of years, I thoroughly enjoyed riding my ZX-10R. I rode it to get my Level 1 certificate at the California Superbike Riding School in 2014 and smoked its rear tire along with a hundred other riders to get into the Guinness Book of World Records for “most number of motorcycle tire burnouts” in 2015. Jonathan Rea dominated the 2015 Superbike World Championship with his ZX-10R but unfortunately, my business dominated my personal needs so I had to part with my ZX-10R on that same year. It’s a decision that I still regret making to this day. 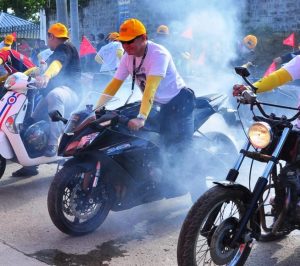 The author smoking the rear tire of his ZX-10R for a Guinness Book of World Records attempt.

But I still consider myself lucky because a loyal reader of MotorCycle Magazine came over to the office and gave me a Maisto 1:12 scale model of a Kawasaki Ninja ZX-10R, albeit in a corporate color of Kawasaki Green with a white lower fairing, and a model generation (2008-2010) earlier than my black Ninja. Oh, well. It’s the thought that counts. 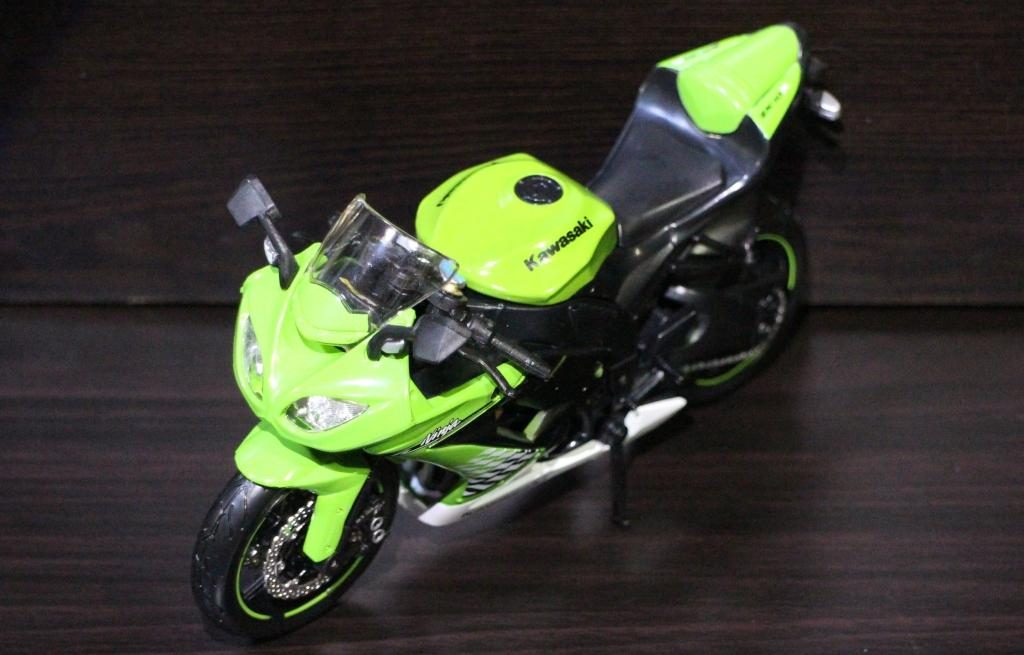 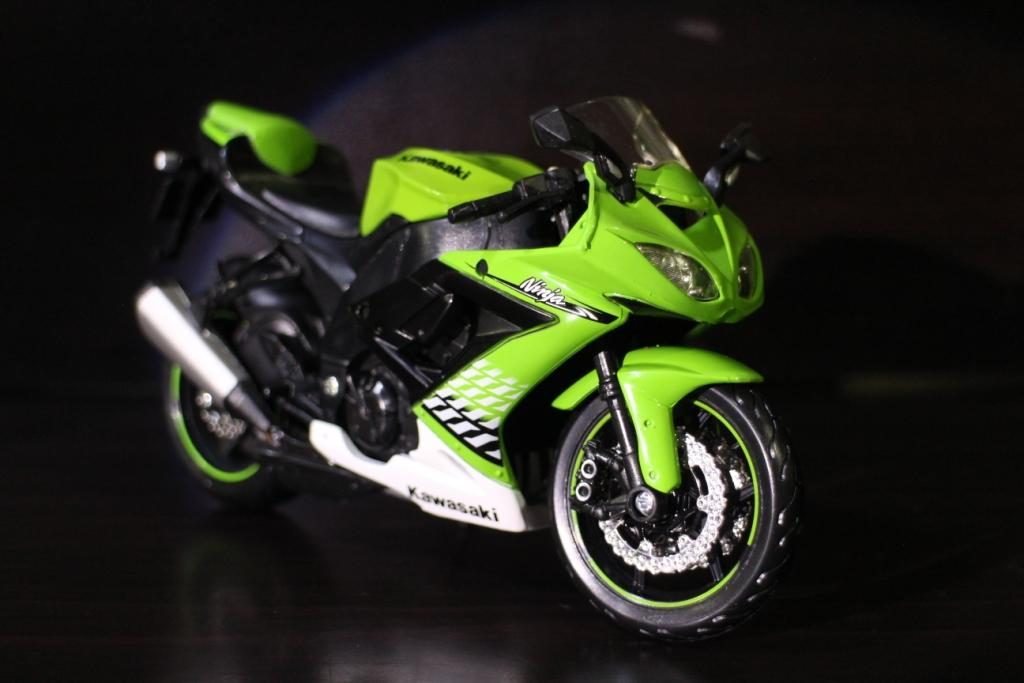 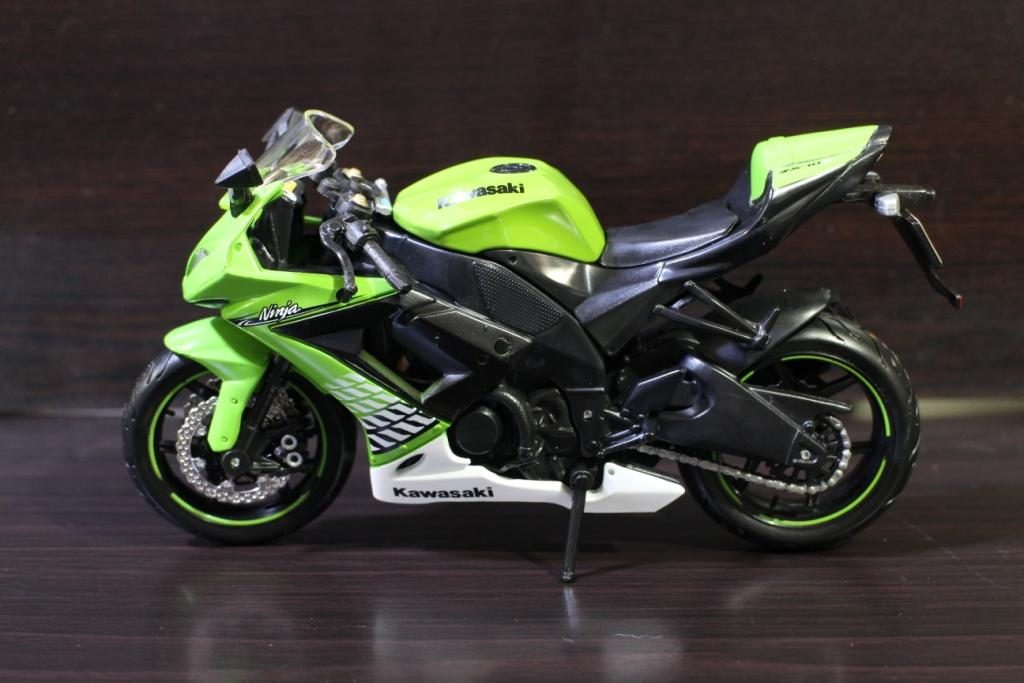 The miniature bike feels hefty and well-built, although the tank and the front fairing look a bit too fat, err… wider… than those on the actual super bike. The clip-on handlebars and the front fork damper adjusters are complemented with a miniature silver Öhlins hydraulic front steering dampener. The instrument panel is almost spot-on and the overall ratio of motorcycle-to-tire is almost accurate.  The only thing left to do is to drill tiny holes in the disc brakes to imitate the ventilation of the real ones. 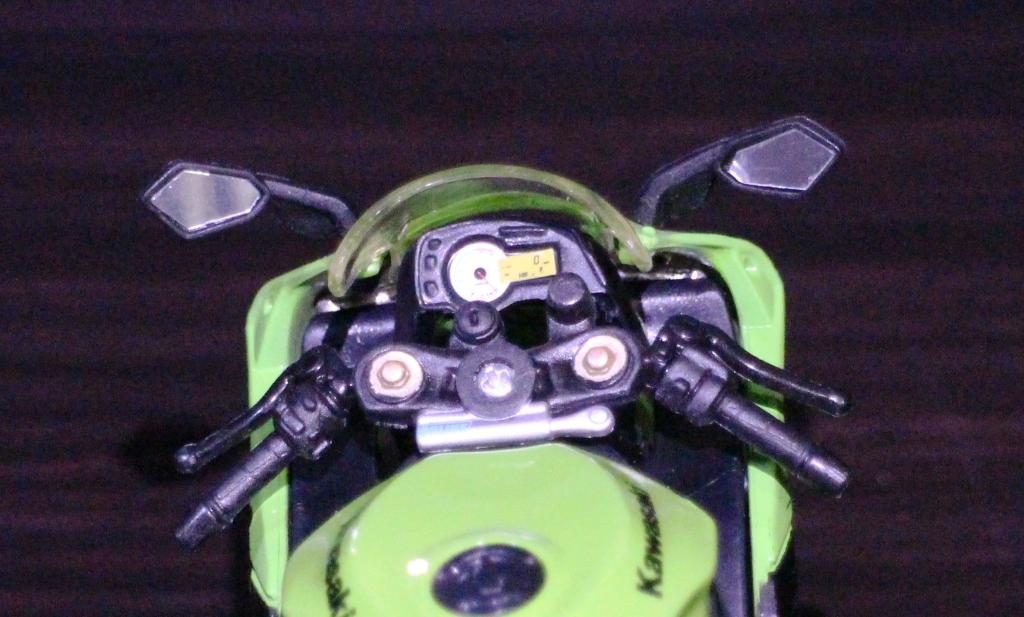 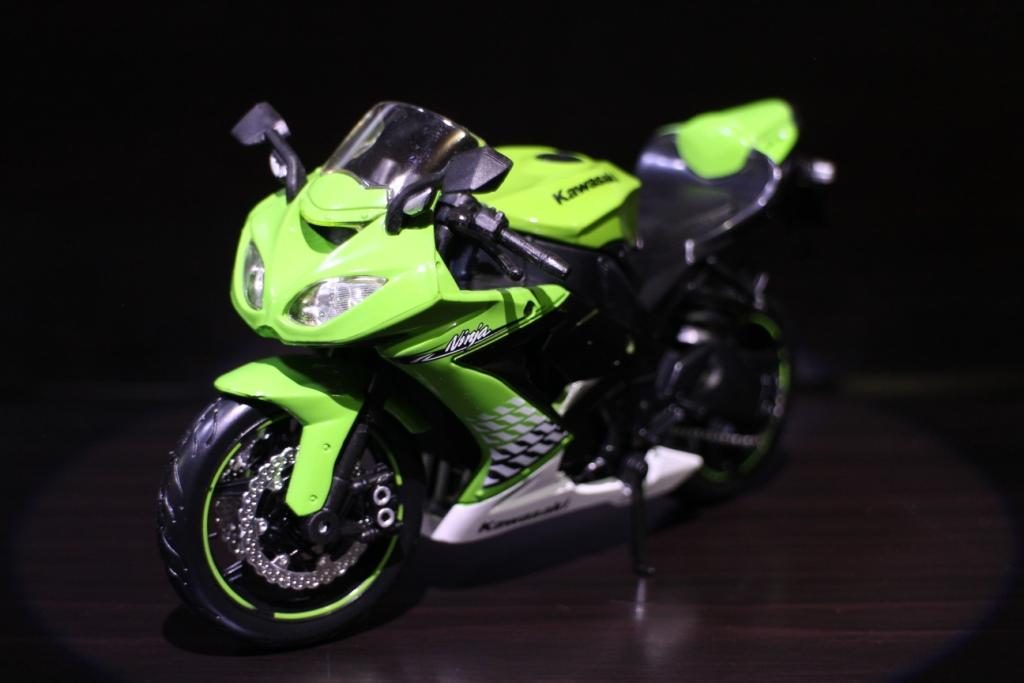 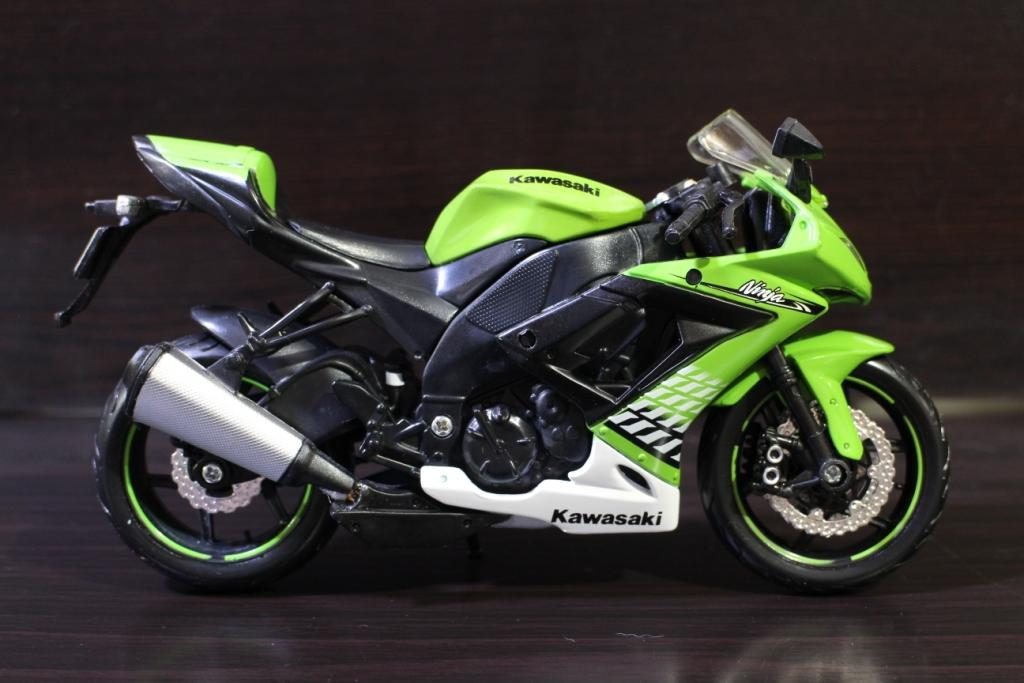 If ever there would be funds available for me to spend on another “fun toy” in the near future, I think I’d buy another Kawasaki Ninja ZX-10R. I heard the 2020 version is a lot more powerful yet a lot easier to ride. If I can’t afford it, then I’d look for a 2008-2010 Ninja ZX-10R just like the miniature so that I’d have the “Big-and-Little” set. That way, I can be a responsible adult when I’m on the actual super bike, and I can be a kid again when I’m toying with the Maisto model bike. My black 2013 Ninja made me feel 20 years younger. The next time around, I want to feel a lot, lot younger… 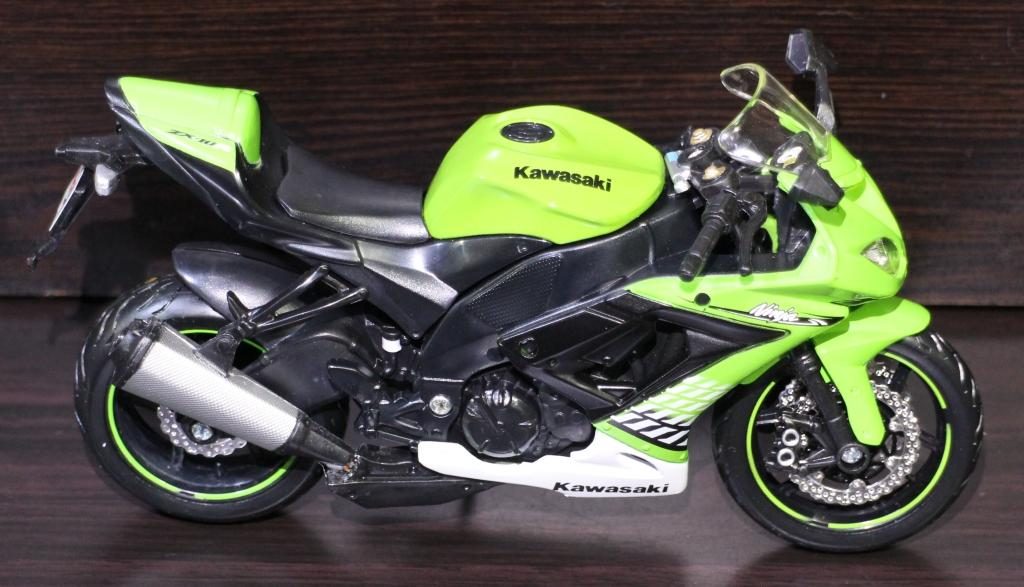 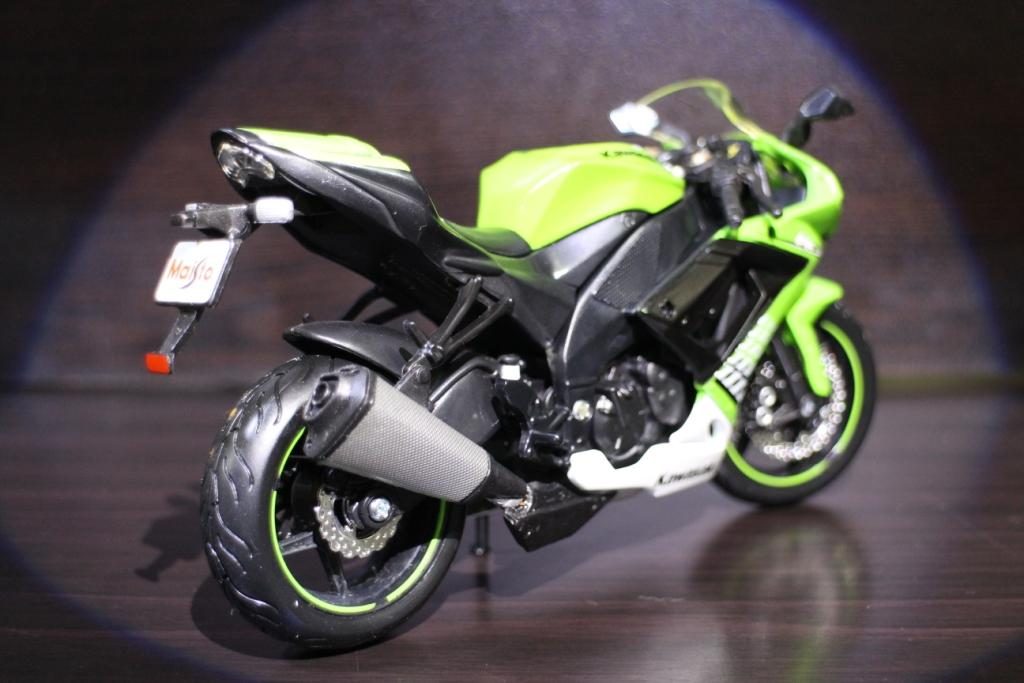 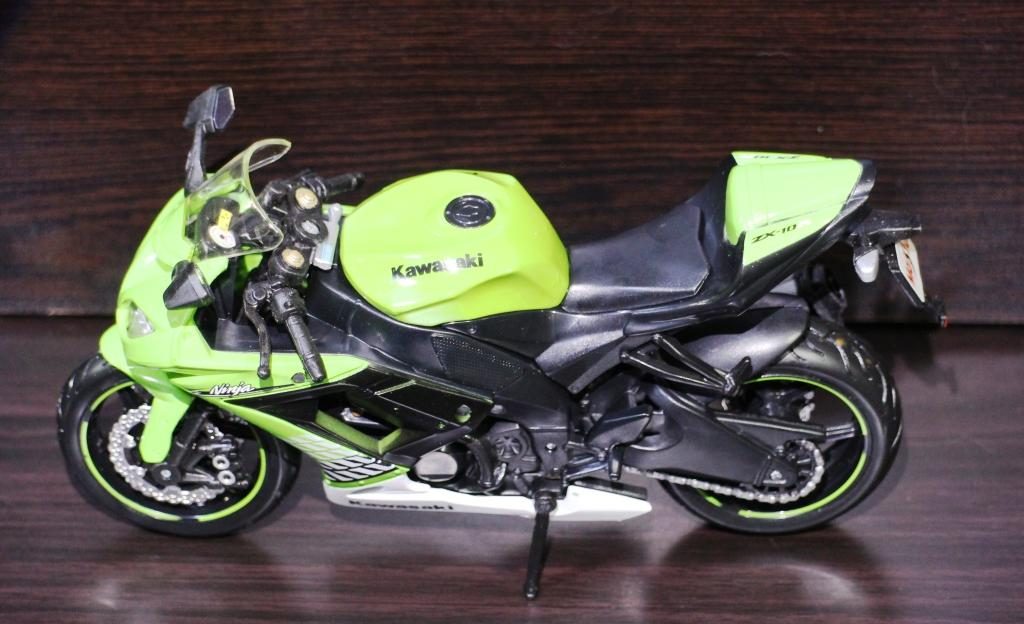 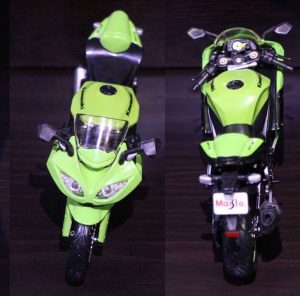 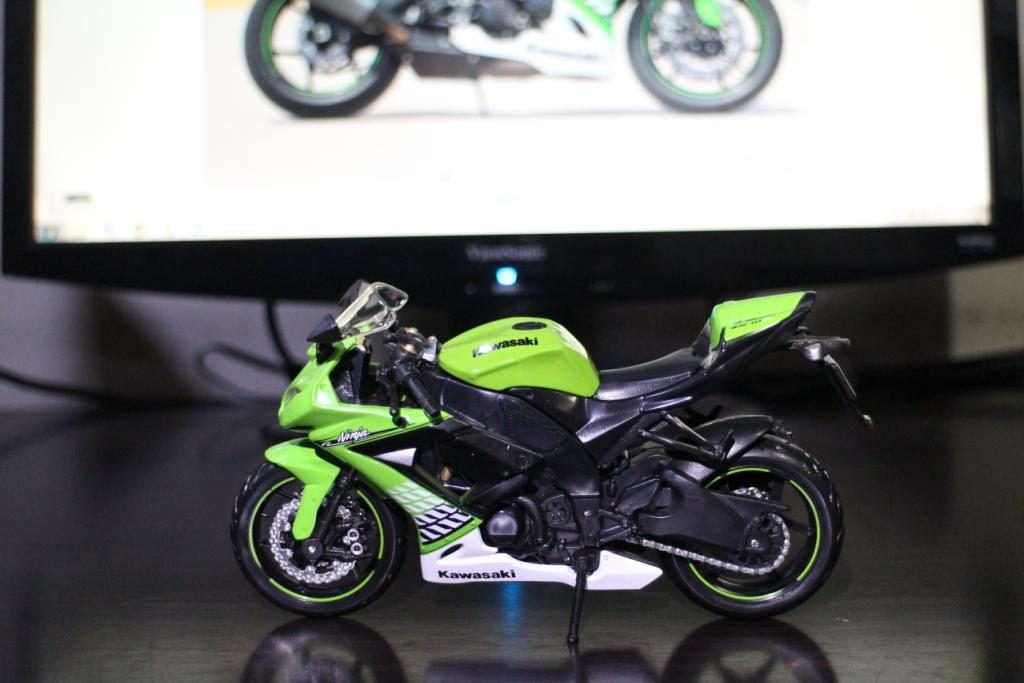 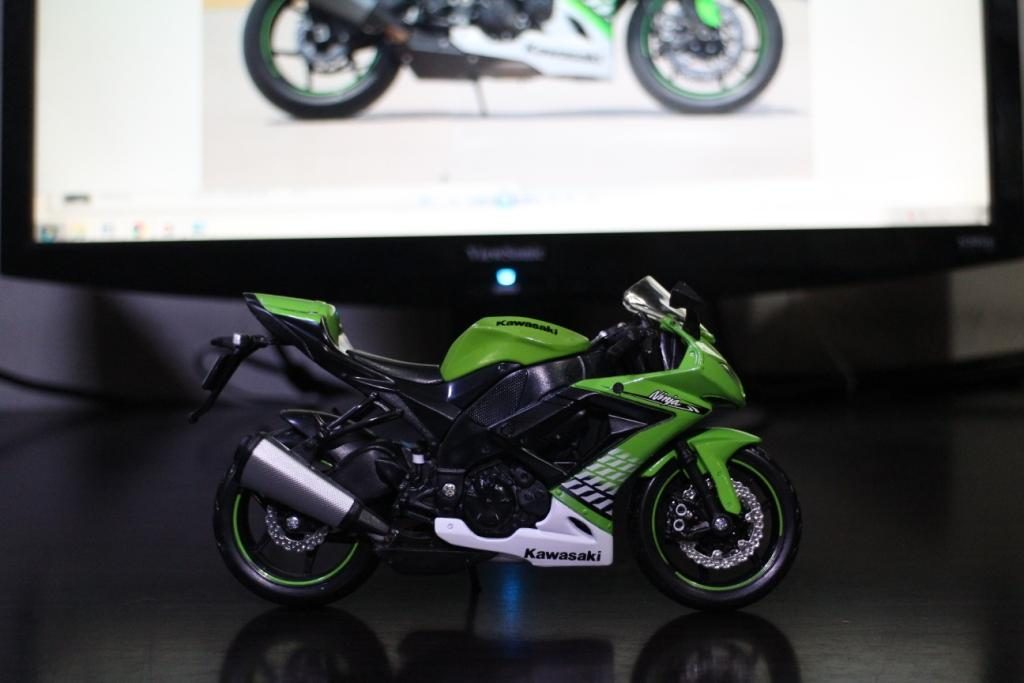