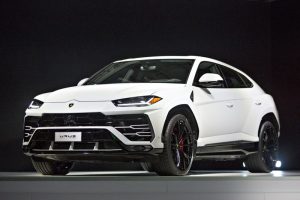 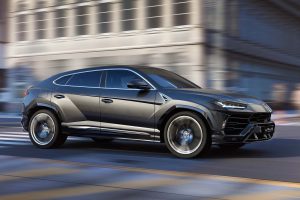 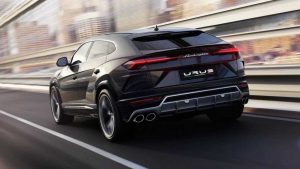 While the Urus shares its platform with some stablemates in the Volkswagen Group, such as the Audi Q7, Bentley Bentayga, Porsche Cayenne, and Volkswagen Touareg, it distinguishes itself as a Lamborghini with its artfully chiseled and muscular design, aggressive fascia, and slim snake-like lights, which is a design language shared with the Huracan and Aventador. 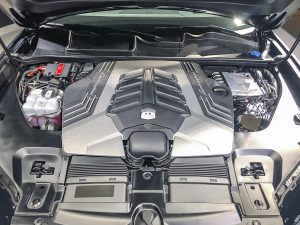 The Urus features rear-wheel steering, an air suspension system that can provide a maximum of 250 mm (9.8 in) of ground clearance for off-road use, and a selection of driving modes that adapts the suspension to improve the car’s performance in various driving conditions: Strada (street), Sport, Corsa (track), Terra (dirt), Sabbia (sand), and Neve (snow). The factory fits 21-inch wheels shod with Pirelli P Zero Corsa tires as standard, but optional 22- or 23-inch wheels are also available. Stopping power comes from 440 mm (17.32 in) carbon ceramic rotors with 10-piston calipers in the front and 370 mm (14.57 in) rotors with 6-piston calipers in the rear. 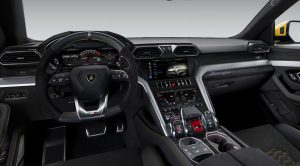 With the insatiable worldwide demand for SUVs, Lamborghini expanded their plant and improved production to build 1,000 units in 2018 and 3,500 units in 2019. Despite this, there’s a 12-month waiting period for global orders. And sorry, according to Lamborghini Manila, the Urus allocation for the Philippines all have been spoken for, with another 20 units coming in early 2019. Price is available upon application so please book your order now. 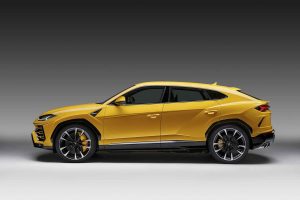 “The 2019 Lamborghini Urus is a model that’s born out of the company’s vision to continually defy boundaries, and with it, the desire to create the world’s first super SUV“, stated Robert Coyiuto III. “We are very proud to bring this groundbreaking car to the Philippines.” We can’t wait to test drive this Lamborghini super SUV soon!