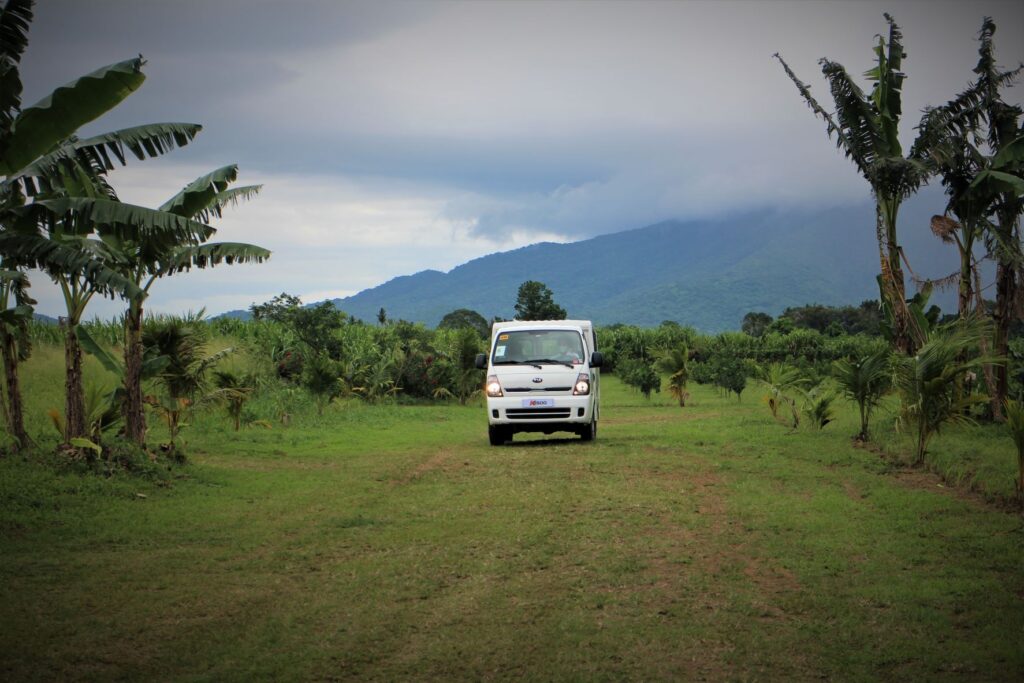 It was one of those days when I had to get up from a comfortable bed before 5:00 AM to prepare for a short, one-day out-of-town media drive. I had to leave early from our home in Quezon City to beat the morning rush hour traffic and make it in time to the swab test scheduled at 6:45 AM in Bonifacio Global City (BGC) before I can be admitted to join the event. But I didn’t mind. It has been quite a long while since my last face-to-face live event. It was a welcome change after being cooped up in my home-office for several long months since the pandemic has struck. 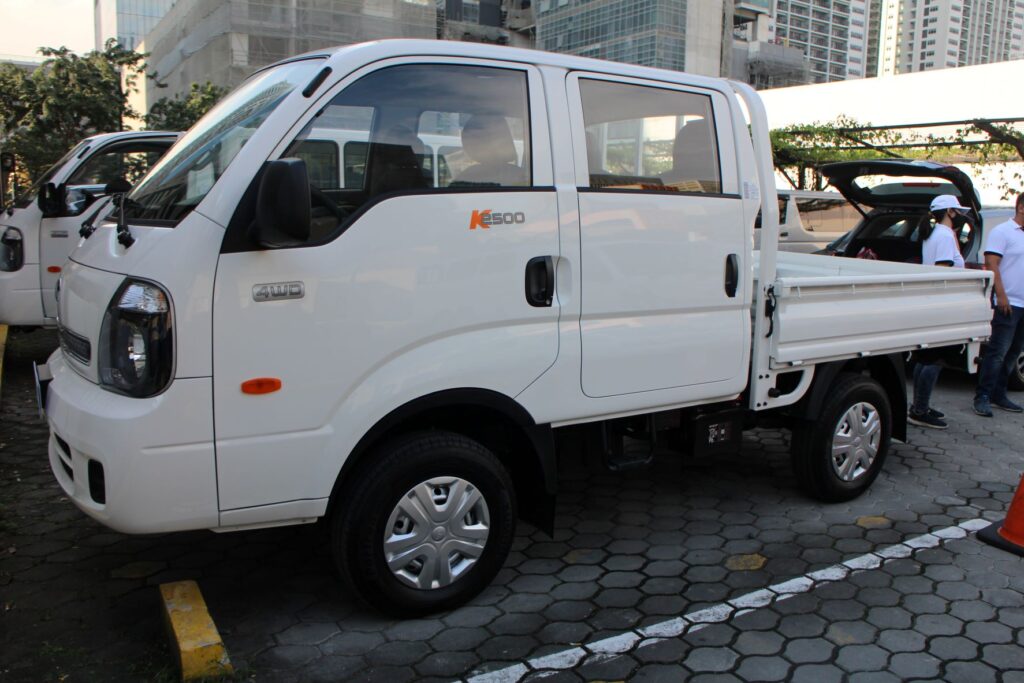 I was assigned to drive the K2500 Double Cab Dropside 4×4 light truck from BGC to The General’s Farm.

After testing negative of the COVID-19 virus, our drive master for the day, George Ramirez, directed me to drive to the parking lot beside the Volkswagen/Kia/KTM BGC dealership where I met up with the rest of George’s crew and the media participants of our Kia K2500 Media Drive dubbed as “K-Asenso sa Business Mo” (helping grow your business). I learned that the drive was divided into five days to limit the participants to a smaller number, perhaps to comply with the directive of the Inter Agency Task Force (IATF) on gatherings and events. I also learned that I was assigned to drive the 2021 Kia K2500 Double Cab Dropside variant from BGC to The General’s Farm in Tanauan, Batangas. “Hmm…”, I thought to myself, “This looks like fun!” 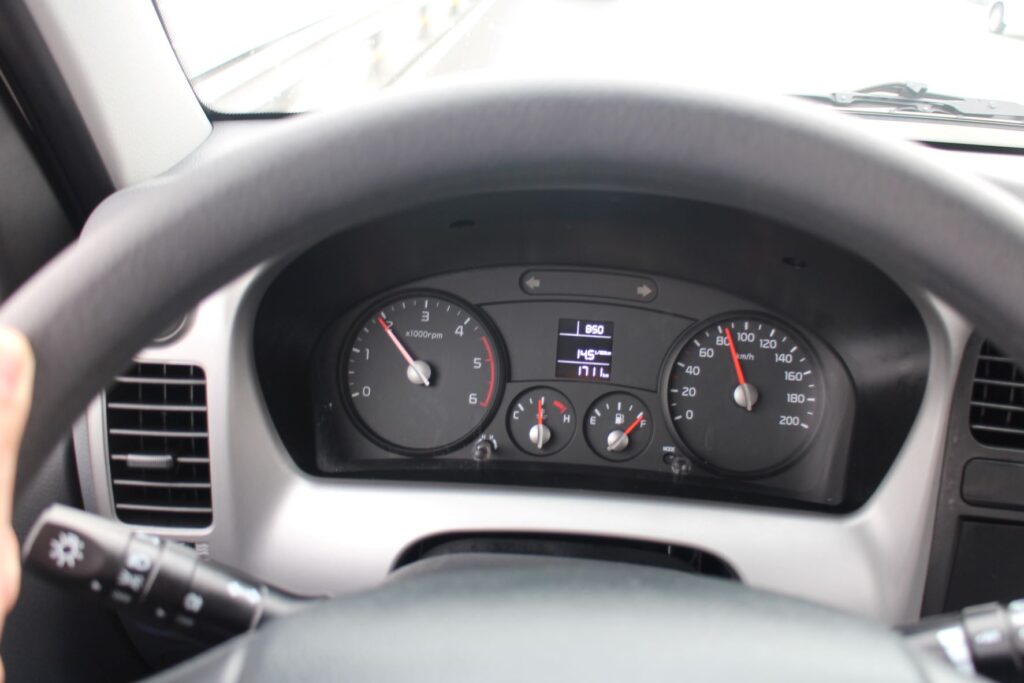 Taking It Easy on the Highways and on Town Roads

From BGC, our convoy of five Kia K2500 light commercial vehicles took the Skyway and the South Luzon Expressway (SLEX) where I observed that the turbocharged 2.5-liter 4-cylinder common rail diesel injection (CRDI) engine of my double cab was smoothly running below 2,000 rpm in 6th gear at highway speeds. I also observed that the clutch actuation was easy, steering effort was light yet communicative, and that shifting between the six gears, whether up or down, was always positive.  All the controls are within easy reach, the gauges are immediately legible, and the interior is surprisingly quiet because of its double-seal doors. It was almost effortless to drive and comfortable on the highways. I can dare say that driving the double cab was almost car-like. 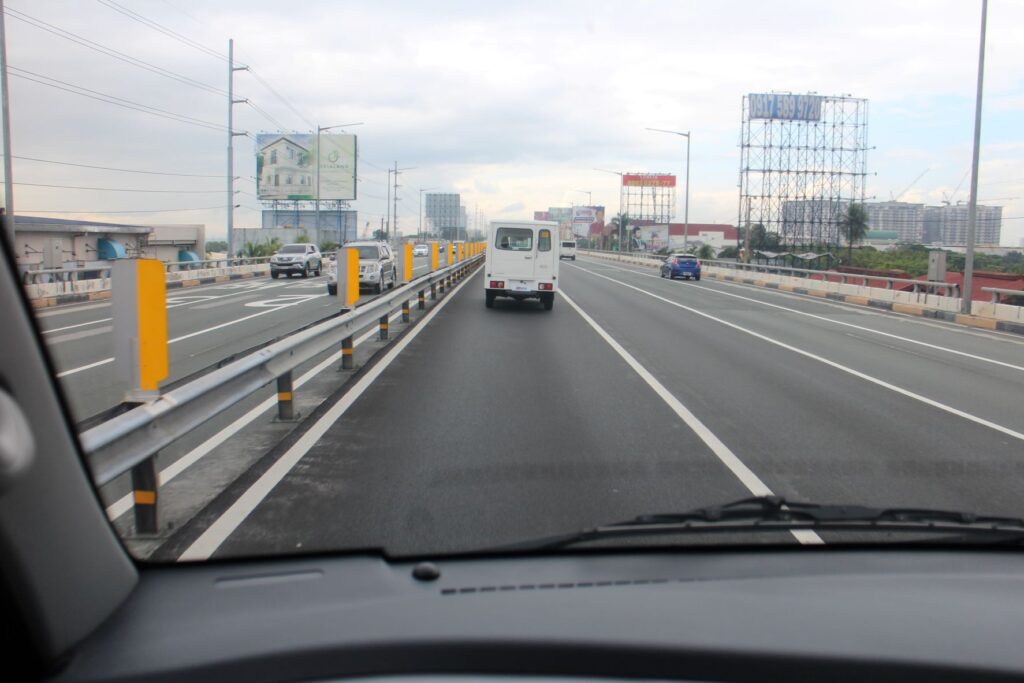 Driving the K2500 Double Cab Dropside on the highways proved to be smooth, comfortable and almost car-like. 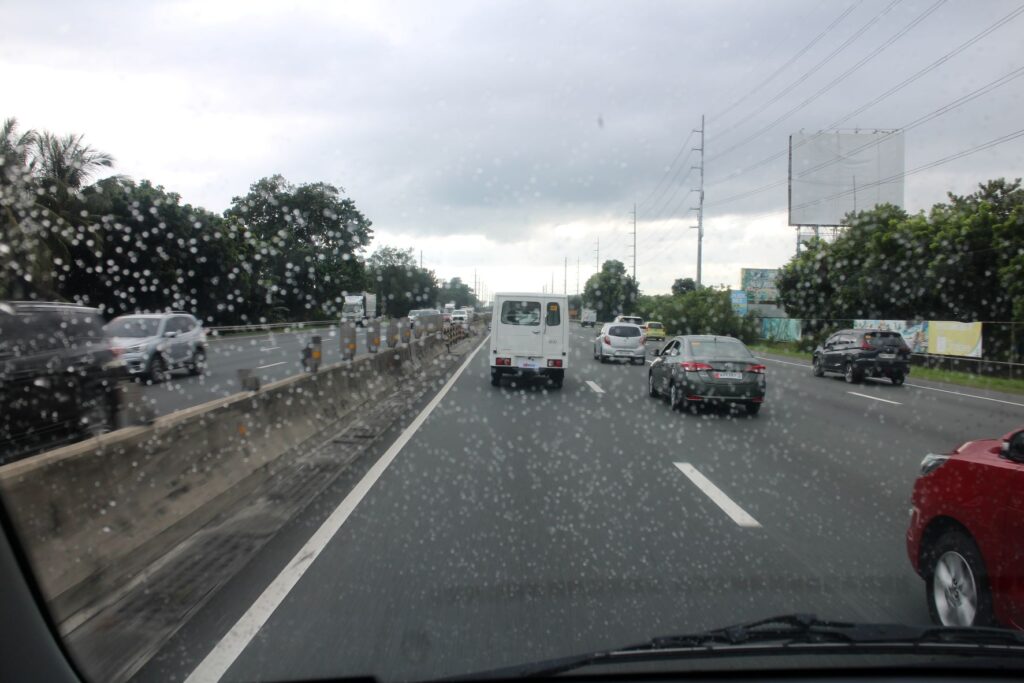 A little rain may have dampened the road surfaces but not our driving enthusiasm for the K2500. 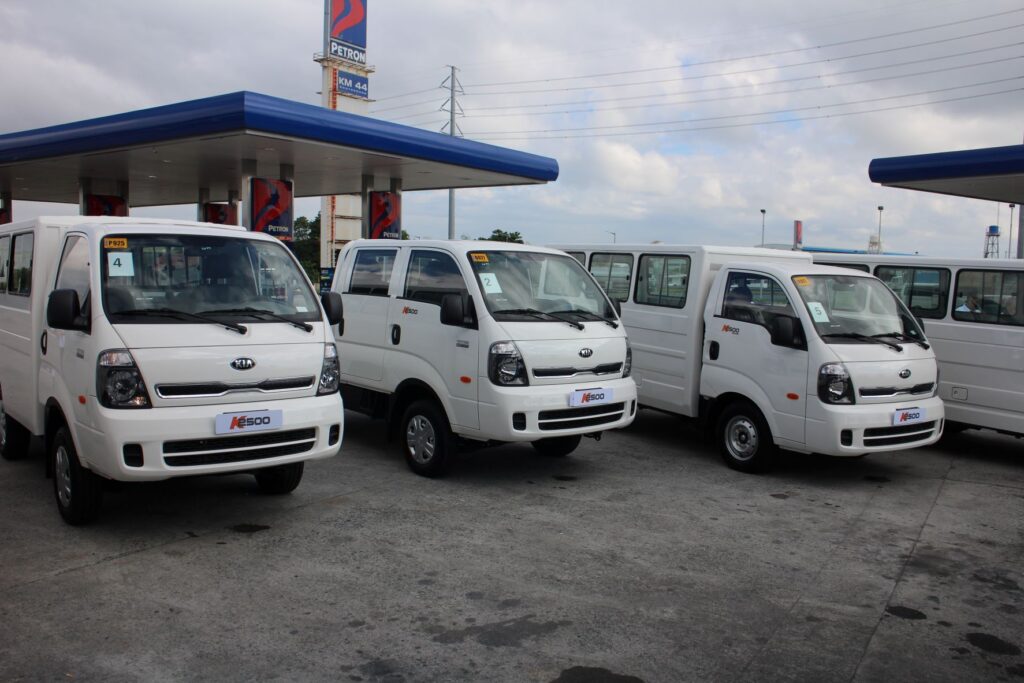 My Double Cab Dropside was sandwiched between the Karga and Kargo cargo vans during our short stopover at the Petron service station along SLEX.

We made a short stopover at the last Petron service station along SLEX to meet up with the K2500 Single Cab Dropside pickup driven by another media colleague. From there, we drove on into the STAR Tollway, where I found that my cab-over-engine (COE) Kia double cab did not bob up-and-down on the uneven road undulations as I anticipated. It was really a smooth ride. We exited at Tanauan and encountered some light traffic along the four-lane provincial highway where I was able to sample what most delivery drivers experience every time they drive along town roads – upshifting, downshifting, braking, steering and dodging obstacles. Thankfully, the Kia K2500 made everything easy. 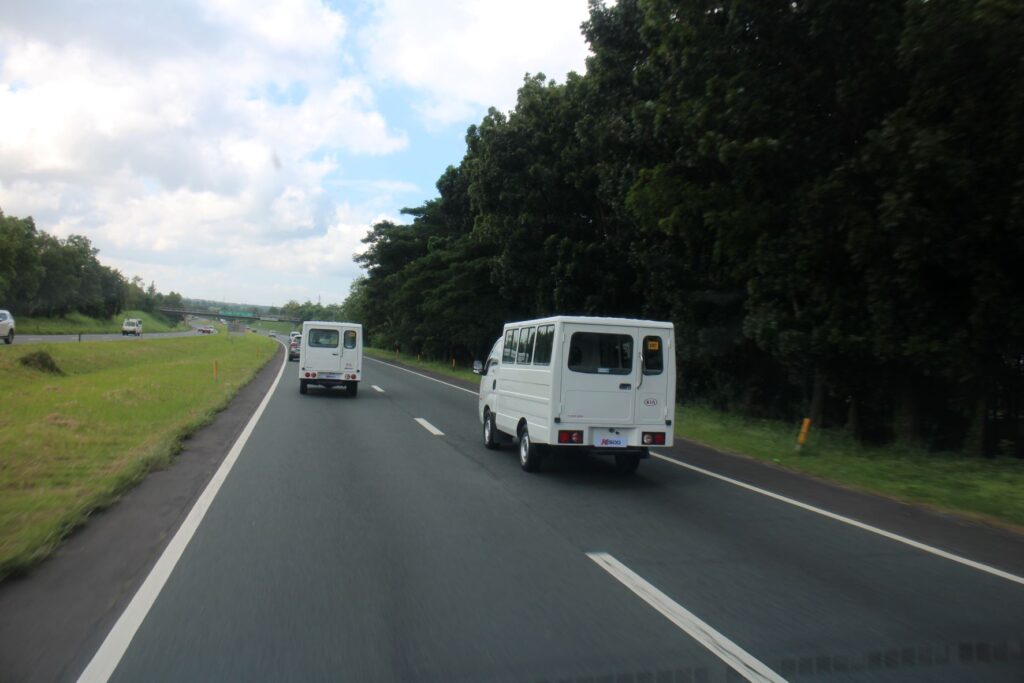 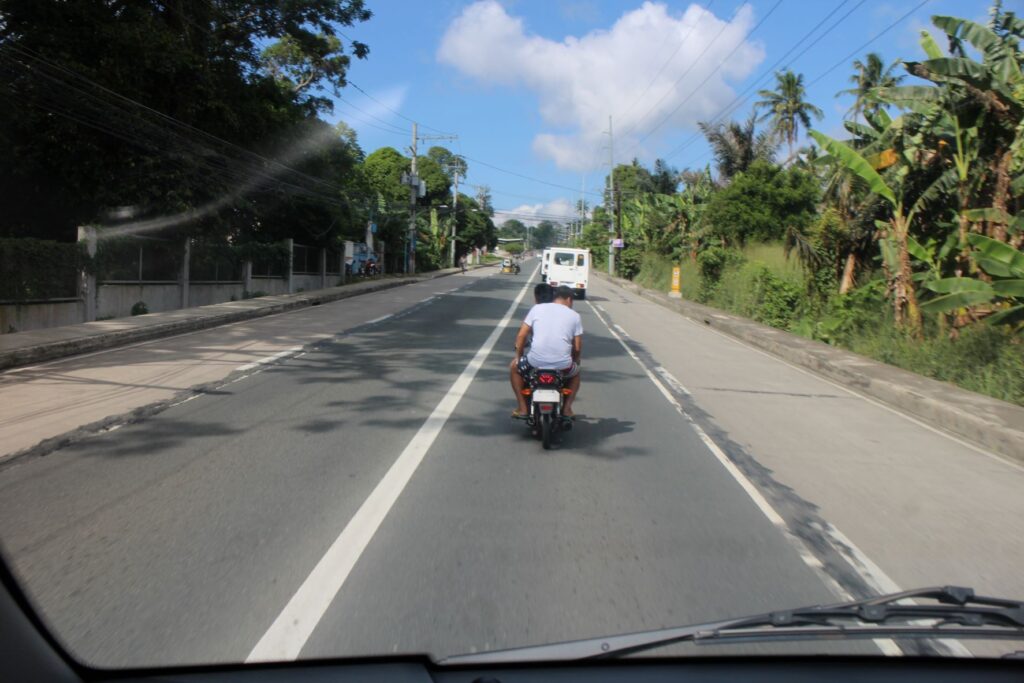 … and felt easy to drive in dodge-and-swerve provincial roads. Wait, isn’t there a Helmet Law in effect here? 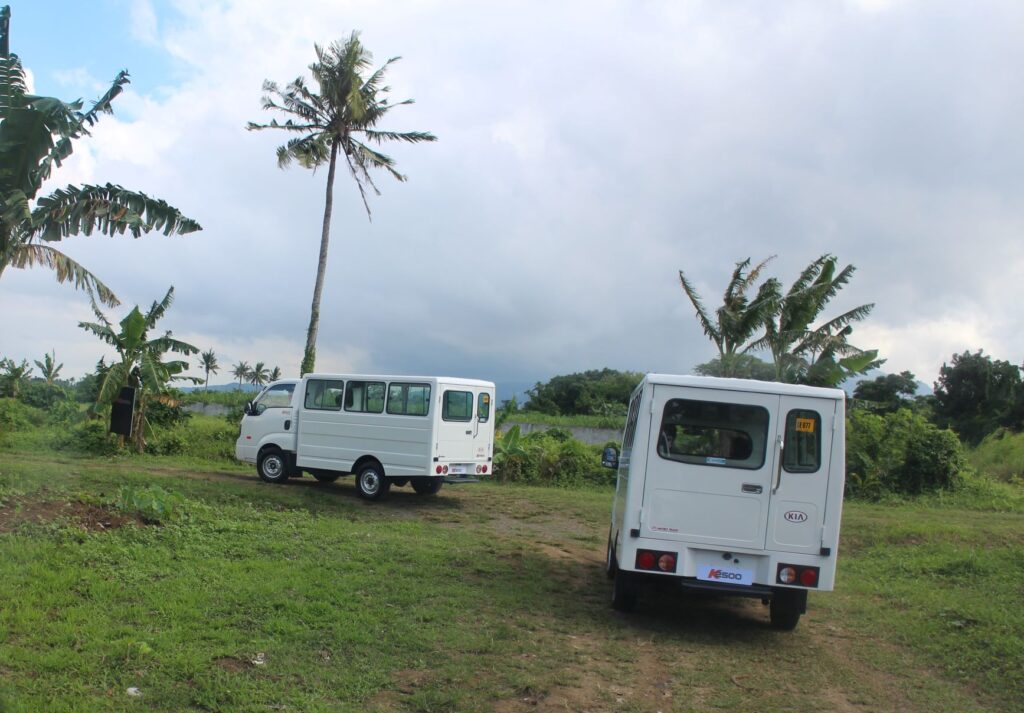 We drove over the unpaved roads inside The General’s Farm but still felt fresh and relaxed after our long drive.

Putting the K2500 Through Its Paces

The main objective of our road trip from Taguig to Batangas was to put the six K2500 through its paces – from driving on the highways and city streets to conquering a wide array of challenging terrain at our destination. At The General’s Farm, George and his crew designed two driving courses – a relatively easy one for the K2500 Kargo and Karga 4×2 models and a decidedly tougher one for the K2500 Single Cab Dropside, Double Cab Dropside and Kargo 4×4 models. In between light drizzles, George, his brother Louie Ramirez, and his nephew Jaime (Louie’s son), walked us through the two courses and hoped that our driving session will not be marred by heavy rains and that our K2500s will not be bogged down in the mud traps. 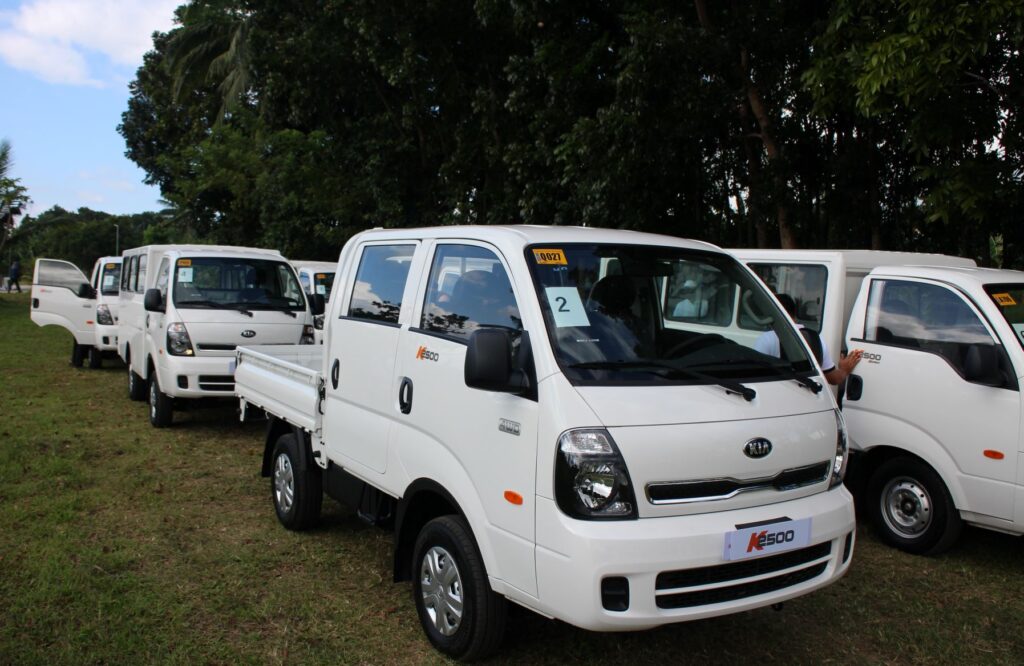 At The General’s Farm, our K2500 convoy was divided into three 4×2 models and three 4×4 variants. 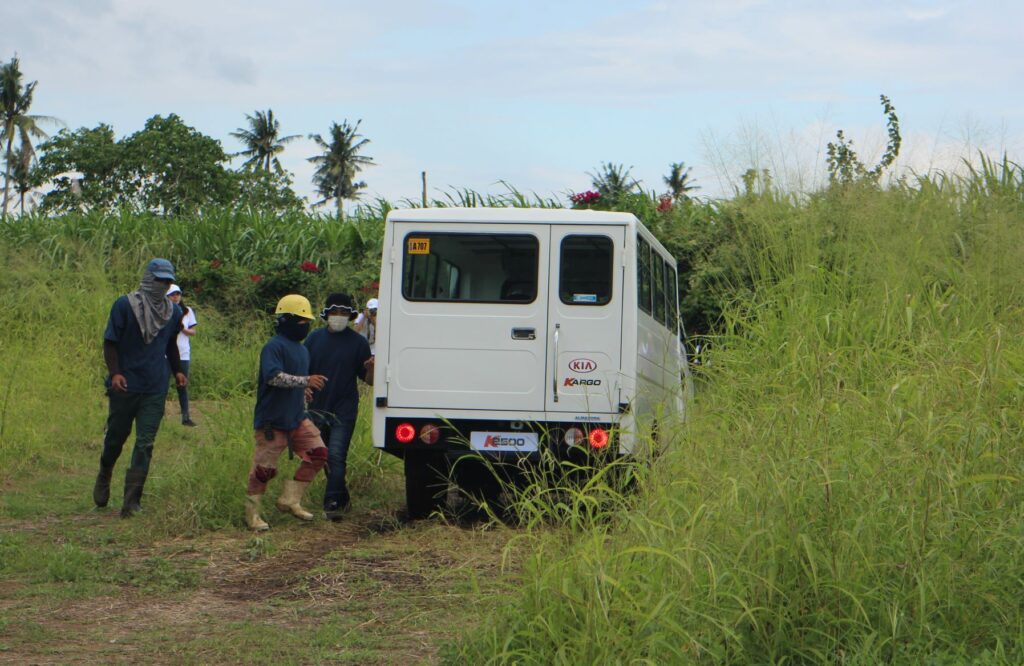 … and one 4×2 Kargo got bogged down in the mud trap because of driver error, but got out on its own after some skillful maneuvering and “a little help from some friends”.

The K2500 Kargo (cargo van) and Karga (passenger van) 4×2 variants drove over the unpaved roads around the farm and through the mud traps quite easily, except for one that bogged down because of driver error, which George jokingly corrected later as “navigator error”. Thankfully, the tougher driving course, which included tight slippery corners that require challenging lock-to-lock steering maneuvers and tough off-camber dips that require precision driving, was reserved for the K2500 4×4 variants. We were first briefed about the features and capabilities of the Single Cab Dropside, Double Cab Dropside, and the Kargo 4×4 models before we were allowed to play with them in the mud. 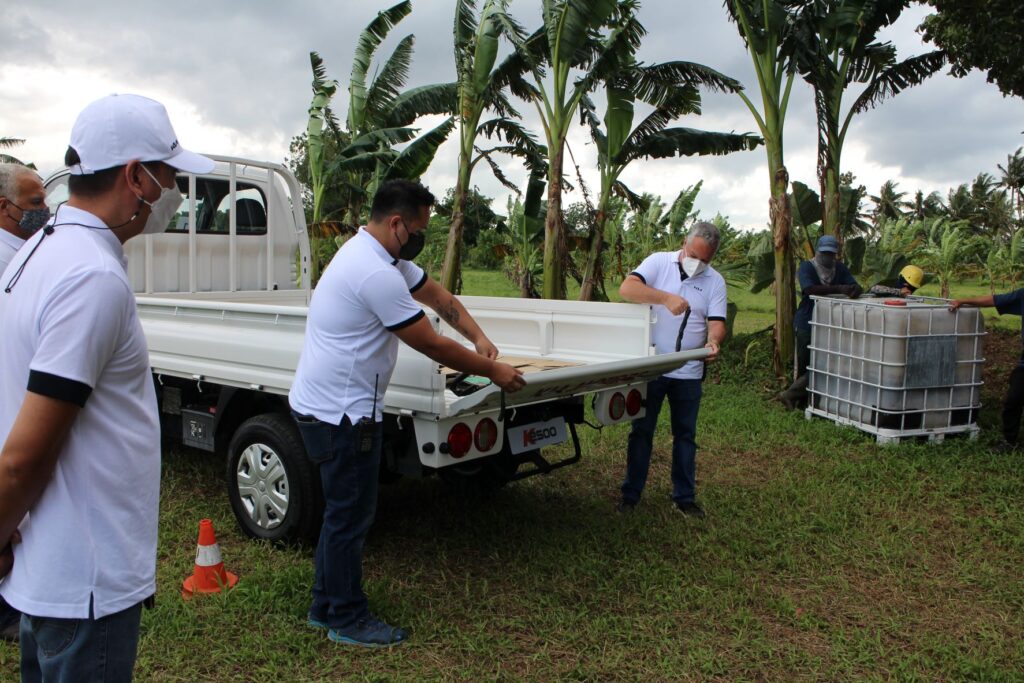 Kia Philippines’ Marvin Martinez and George Ramirez shows the virtues of the K2500 Single Cab Dropside 4×4 truck, which is a CBU unit made in South Korea. 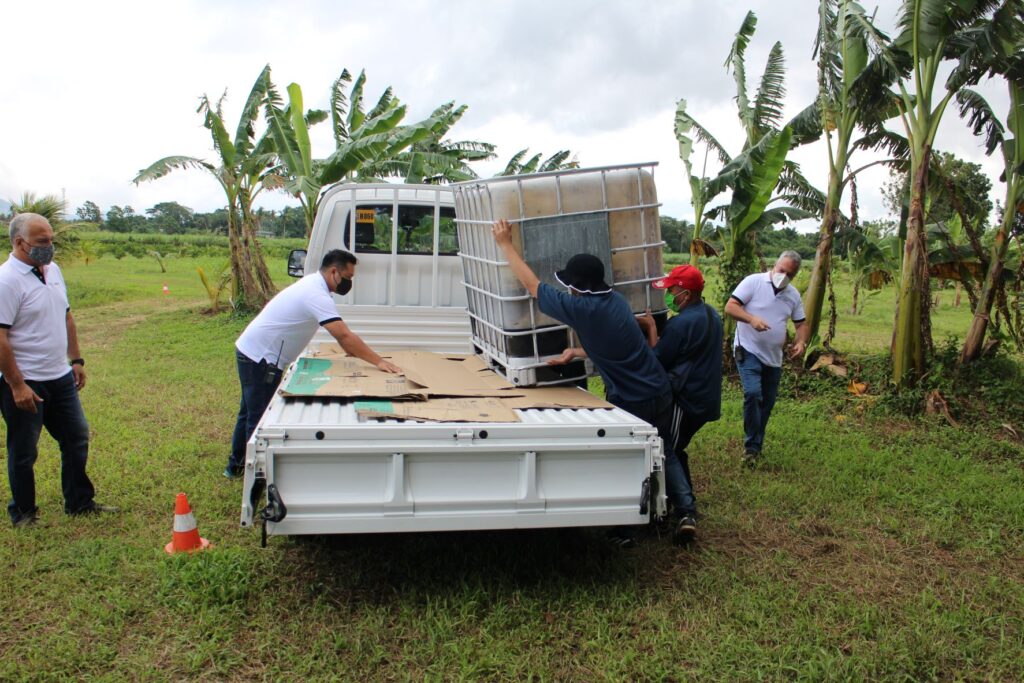 Dropping the side panels allows easy loading of large and bulky items on the cargo bed, which can handle 1,000 kilograms (1 metric ton). 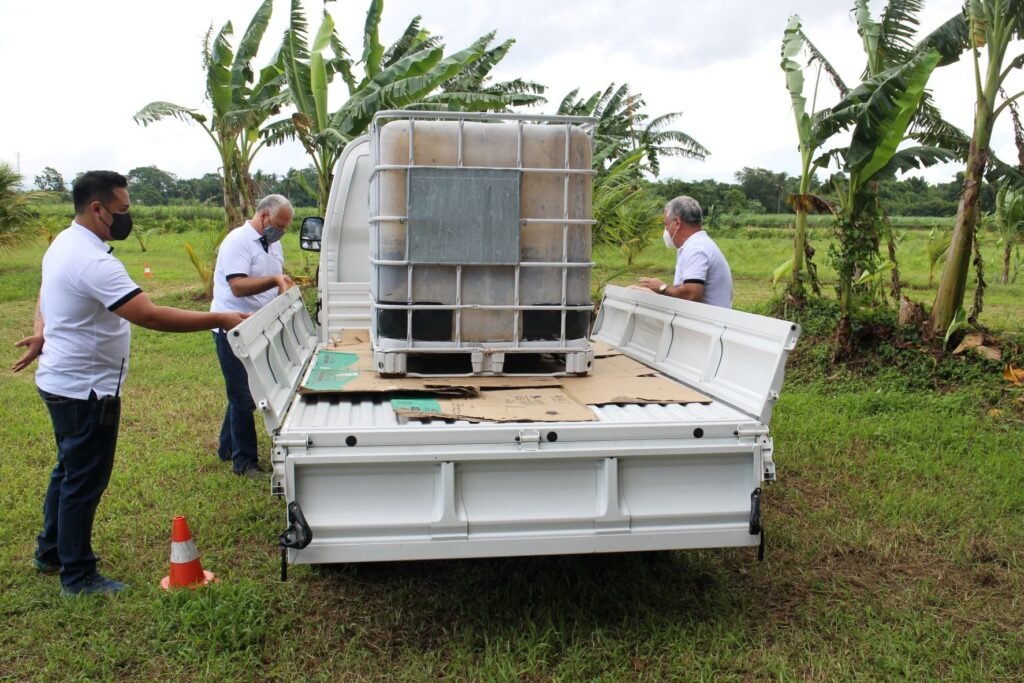 Securing the cargo is also easy with the side panels locked in place and the numerous tie-down hooks around the bed. 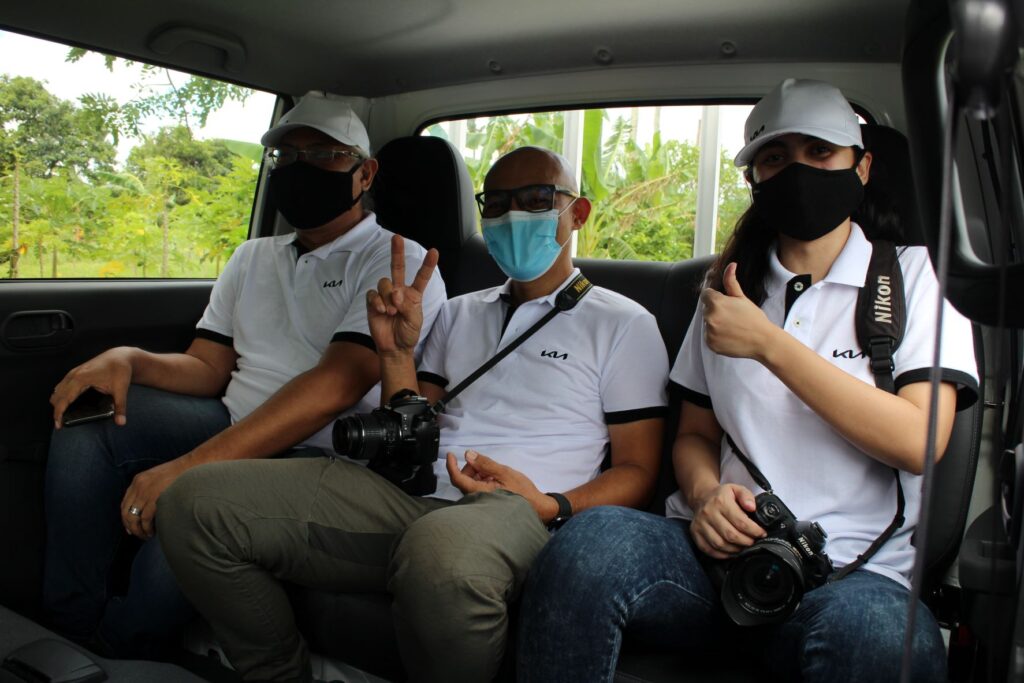 The K2500 Double Cab Dropside 4×4 features a shorter bed and lighter load capacity but it has plenty of head-, elbow-, and legroom for three passengers at the back, making it ideal for transporting crew and equipment.

During the product demo, Kia Philippines Dealer & Sales Operations Manager Marvin Martinez and Training Manager Enrico Bonggo informed us that the K2500 Single Cab Dropside and Double Cab Dropside 4×4 models were completely built-up (CBU) vehicles imported from South Korea. They emphasized that the tough cargo beds of these two variants passed through the detailed manufacturing processes and rigorous quality control of the Kia Motors assembly plant to make them long-lasting and durable. The light truck duo also performed admirably on the rough portions of the tough 4×4 test course. 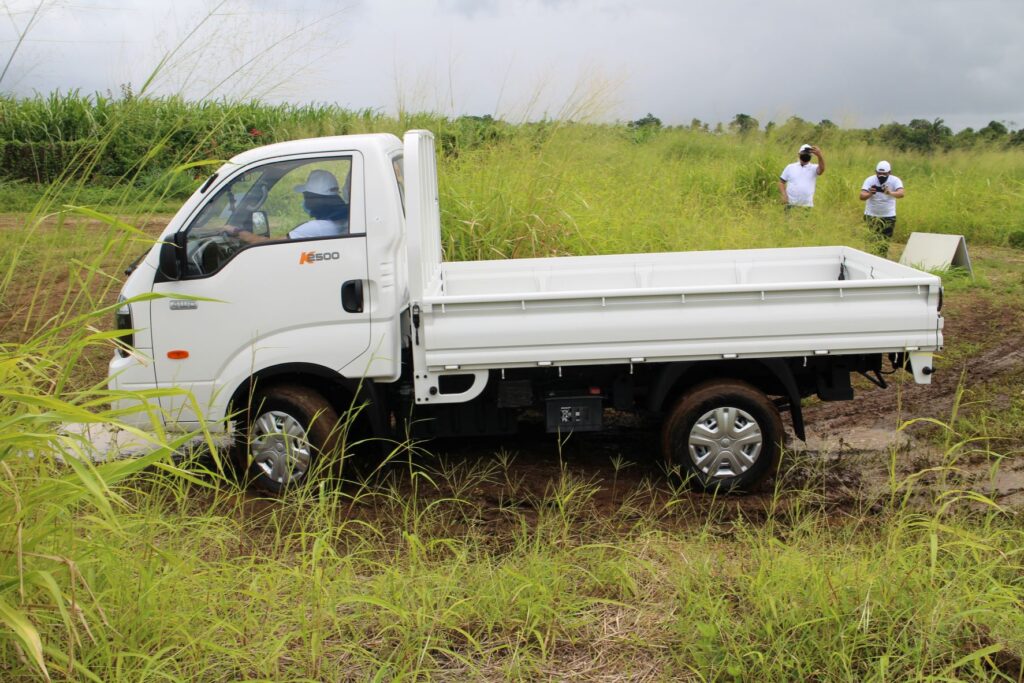 In 4-wheel drive mode, the K2500 Single Cab Dropside light truck easily barreled through the rough and tough terrain without a hiccup… 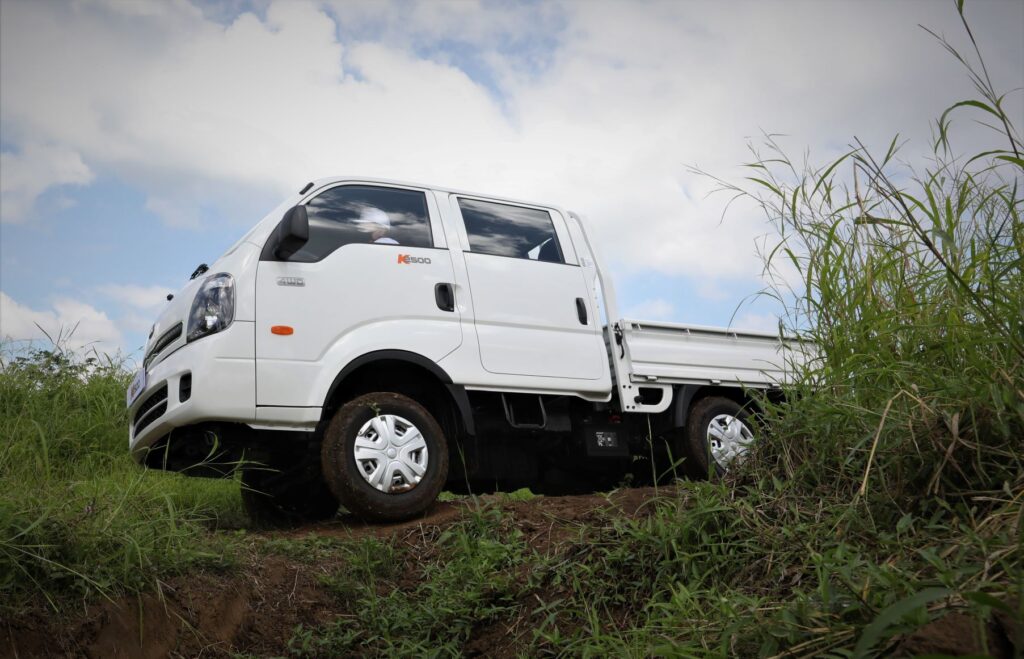 … as did the K2500 Double Cab Dropside light truck. 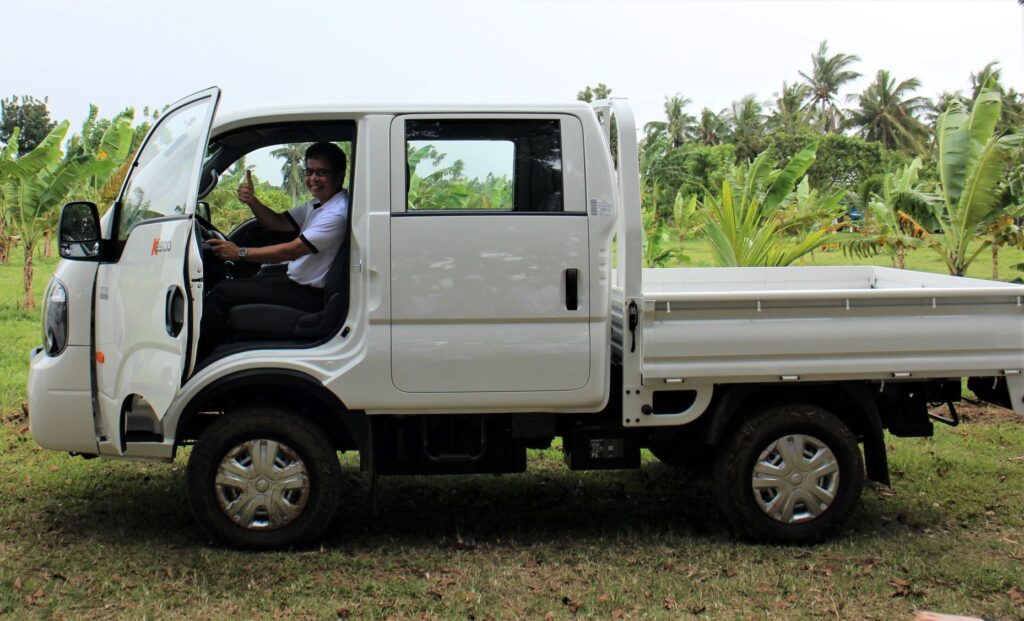 However, it was the K2500 Kargo 4×4 cargo van variant that got my salesmanship juices flowing. George and his team prepared several large boxes that they fit inside the Karga’s cargo hold with room to spare. Then, we drove the Karga 4×4 around the tough course where it navigated through the ruts, dips and slopes with ease and grace, and with its cargo intact. I was so impressed! I blurted out to my assigned navigator, Jaime Ramirez, that Kia Philippines should invite bosses and drivers of delivery companies like DHL, LBC, 2Go, AP Cargo, Grab and related businesses to experience the same driving course as we did. Imagine the delivery capabilities of these K2500 4×4 variants in remote areas. I could picture Doc Emmet Brown, played by actor Christopher Lloyd in the cult movie franchise “Back to the Future“, saying, “Roads? Where we’re going, we don’t need roads!” 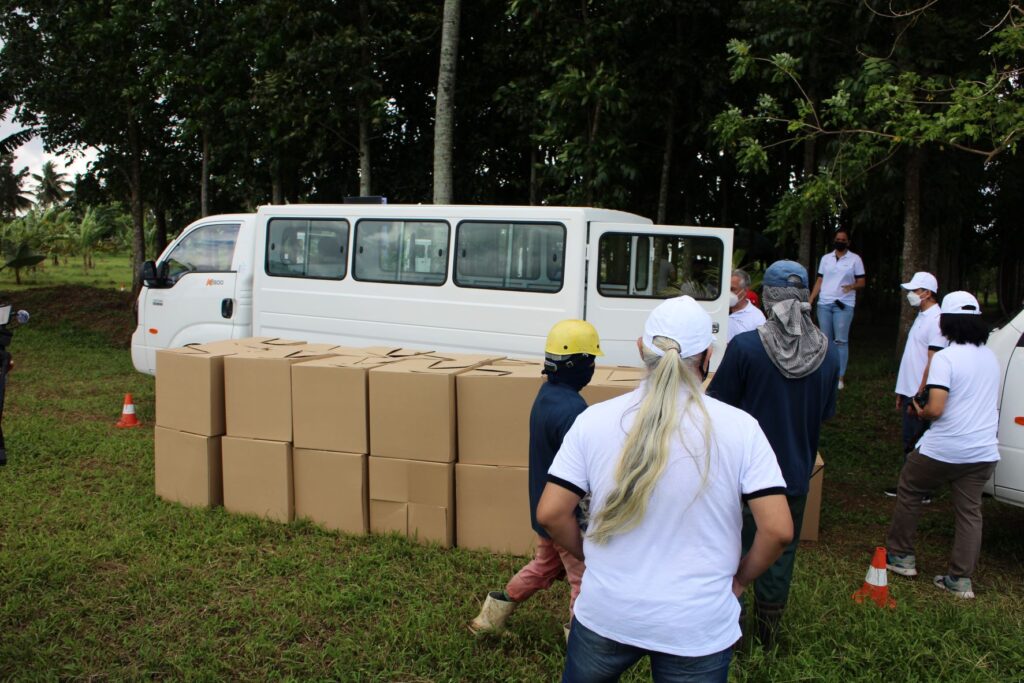 Can you really fit these many boxes into the cargo hold of the K2500 Karga 4×4? 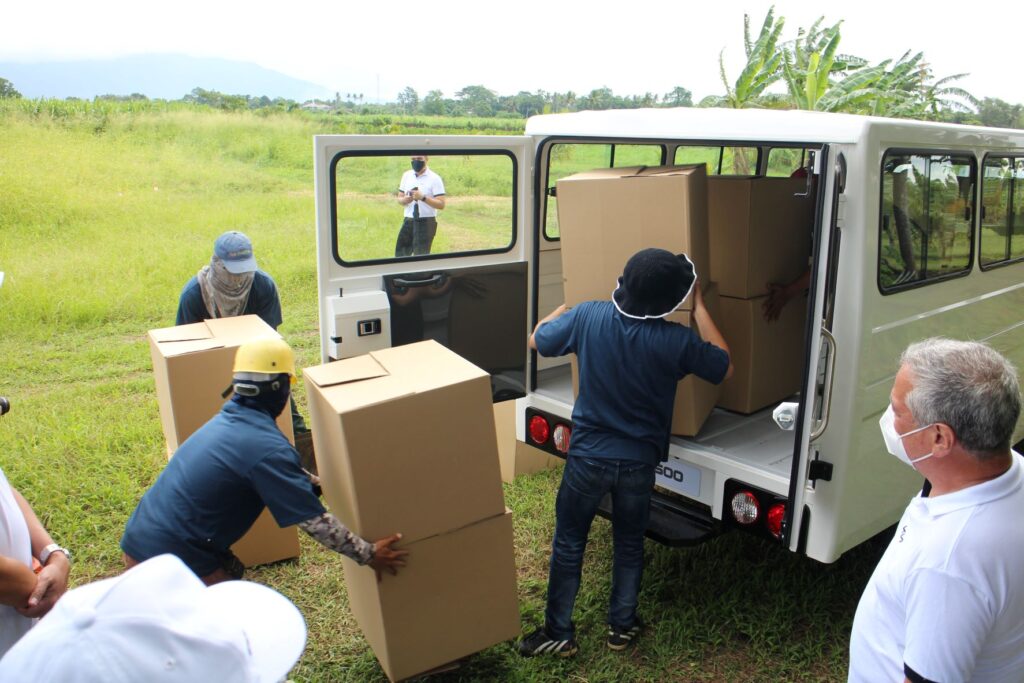 … with room to spare for the hand truck or trolley and other small items. 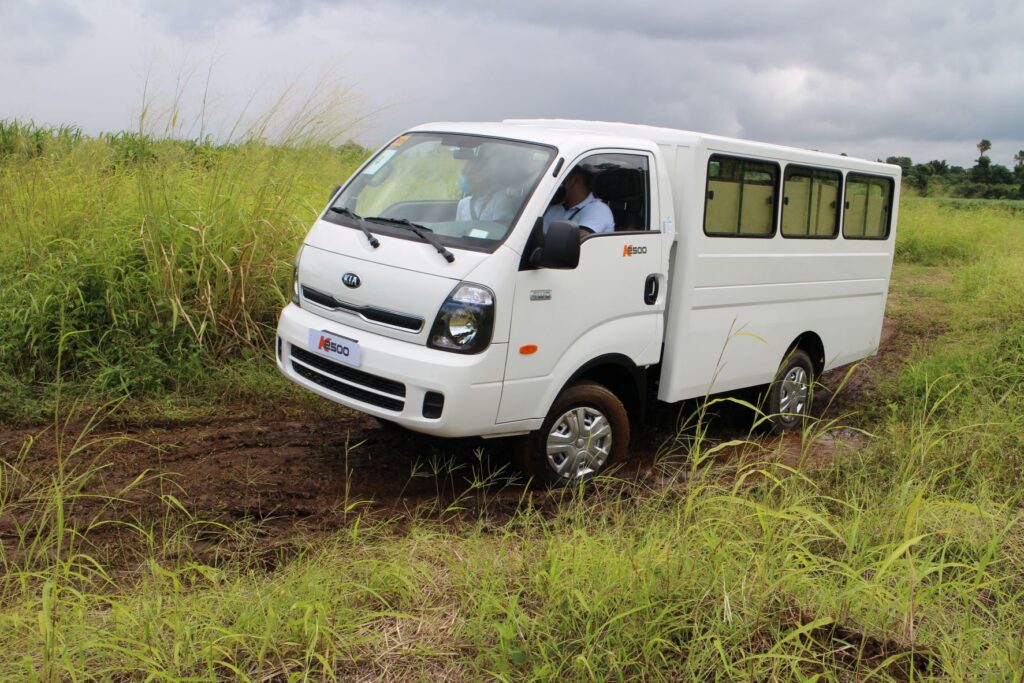 With 4×4 capability and excellent fuel efficiency, the K2500 Karga can deliver the goods to far-flung areas… 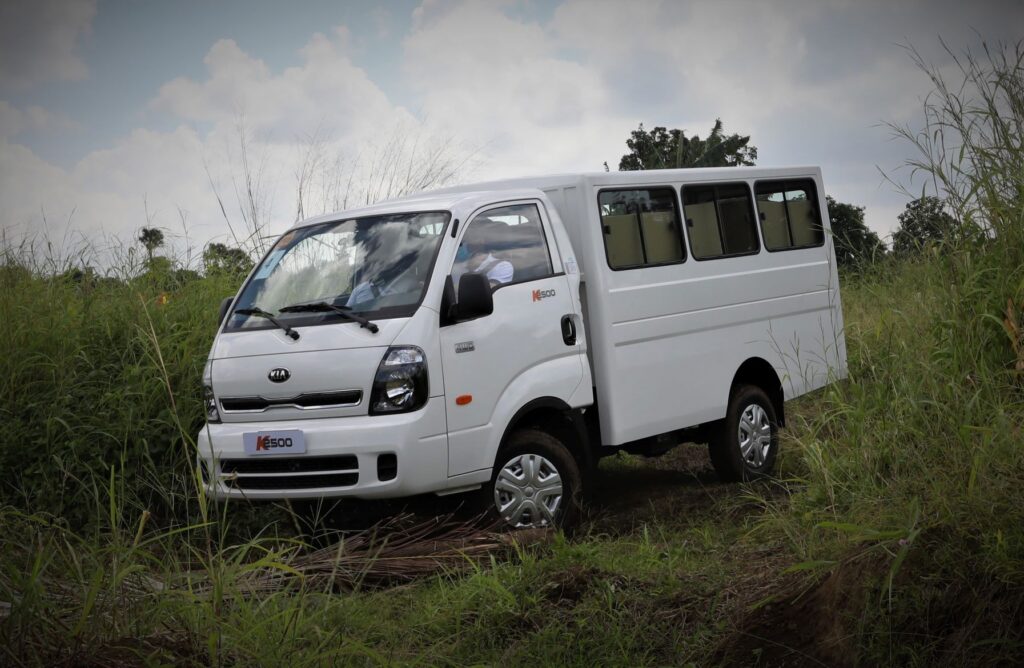 … and even to remote places where there are literally no roads to drive upon.

After our foray into the mud and rough terrain, we were invited into an airconditioned tent area where we had a sumptuous lunch with a cochinillo lechon (roasted suckling pig) as the main course. It was great to  mingle with media colleagues and friends from Kia Philippines, Timmy Naval-De Leon and Catsy Manahan, and experience the camaraderie that everybody missed out on during the months of quarantine, social distancing, and crowd/gathering restrictions. When it was time to head home, we didn’t expect that the Kia K2500 Media Drive has not yet come to its conclusion. George had an ace up his sleeve to further demonstrate the capabilities of Kia’s light truck fleet.

We had a group photo taken with the vehicles, the participants, and Kia Philippines President Manny Aligada. (Photo courtesy of Enzo Delos Reyes/2.0 Magazine)

AC Motors President Toti Zara (left) wasn’t able to join us during our Tuesday media drive but gamely posed with Kia President Manny Aligada and the K2500 variants at The General’s Farm for this press photo. 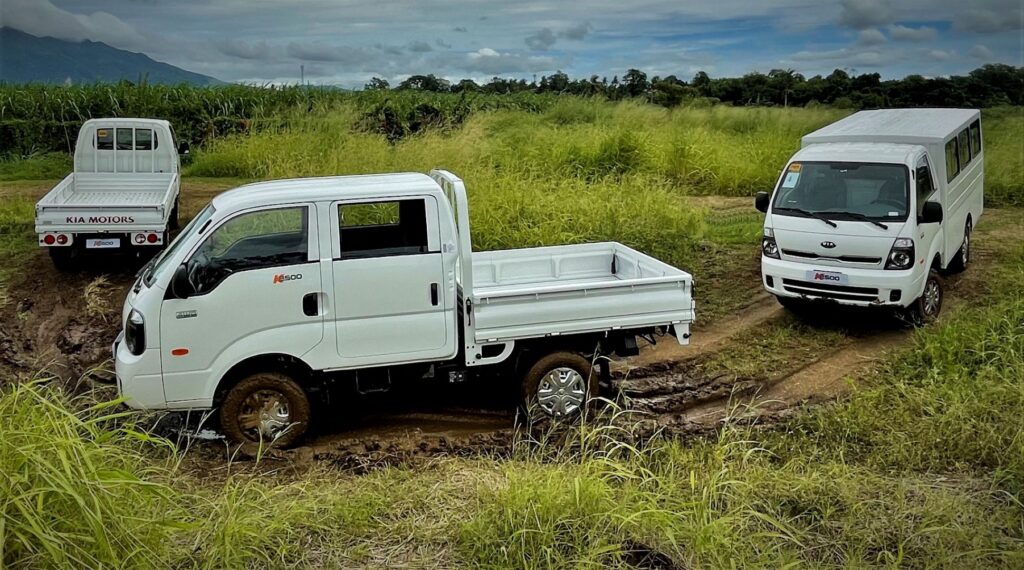 The Kia K2500 4×4 variants proved their mettle on the tarmac and especially in the dirt.

We took the scenic route home and drove through the mountain pass that connects Tanauan, Batangas to Tagaytay City. We climbed up steep uphill roads and zigzags where George directed the drivers of the K2500 4×4 variants to place the gear in 4-High (4H) to distribute power to the wheels with most traction. The 4×4 variants drove up the hills without drama while the rear wheels of 4×2 models with empty cargo holds, such as the K2500 Kargo that I was driving, were making a scene – their rear tires screeching and and scrambling for grip in the slippery portions of the zigzags. It was a fun way to learn the benefits of 4-wheel drive traction, especially for light commercial vehicles. 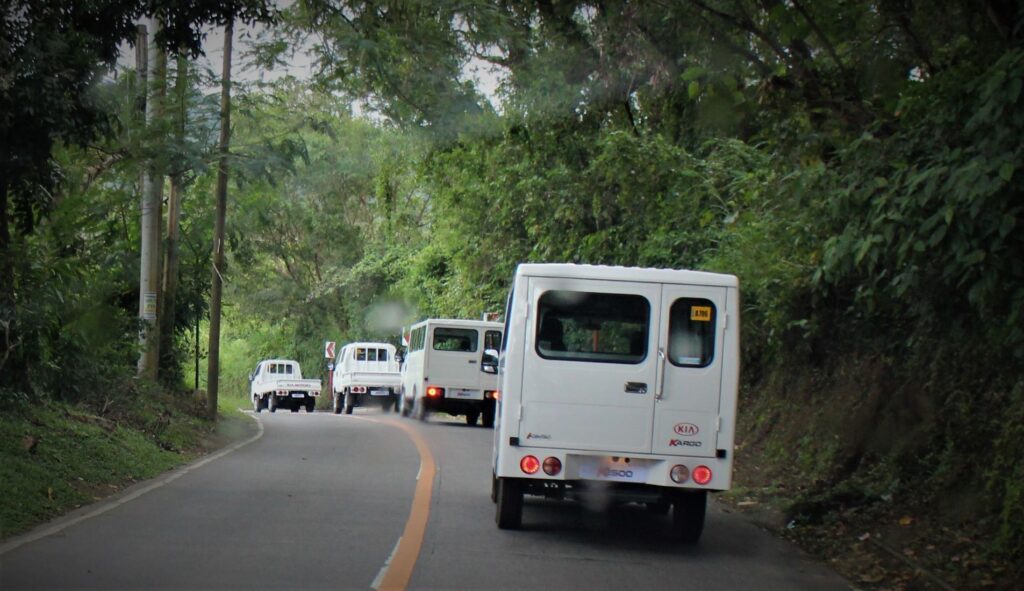 On the way back to Metro Manila, we drove through the zigzag mountain passes that connects Tanauan, Batangas to Tagaytay City under a light afternoon drizzle.

We experienced the traction advantage of the K2500 4×4 models over steep uphill roads that had the rear tires of 4×2 models screeching and scrambling for grip. 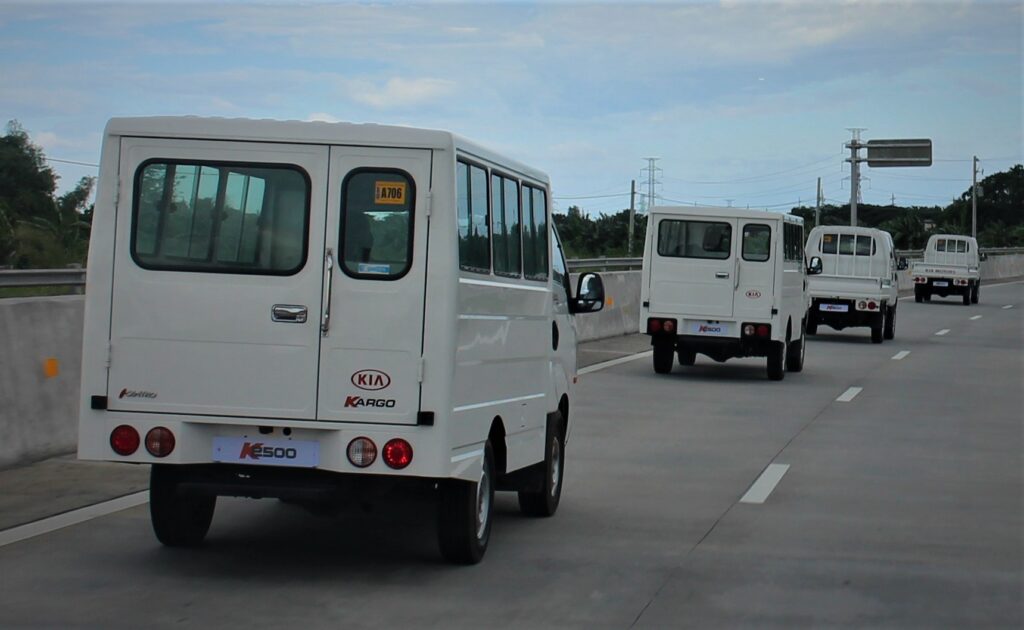 I drove the K2500 Kargo 4×2 on the way home and found that it was as smooth to drive on the highways and city streets as the Double Cab Dropside 4×4.

All in all, the Kia K2500 Media Drive allowed each participant to experience the trucks on a real-time basis and show us how this customizable light commercial vehicle can serve as a business tool for entrepreneurs, companies, and corporations to transport goods and people. Our day trip showed that the K2500 can be an efficient and reliable business partner. With a comfortable ride, ergonomic interior, 3-year / 110,000-kilometer warranty,  3-year FREE 24/7 roadside assistance, and low fuel and maintenance costs, the Kia K2500 light trucks are designed to provide its kargo (cargo) and kargaderos (delivery boys) with the k-ring (caring) they can expect and deserve from Kia, which literally lives up to their corporate motto – Movement that Inspires. 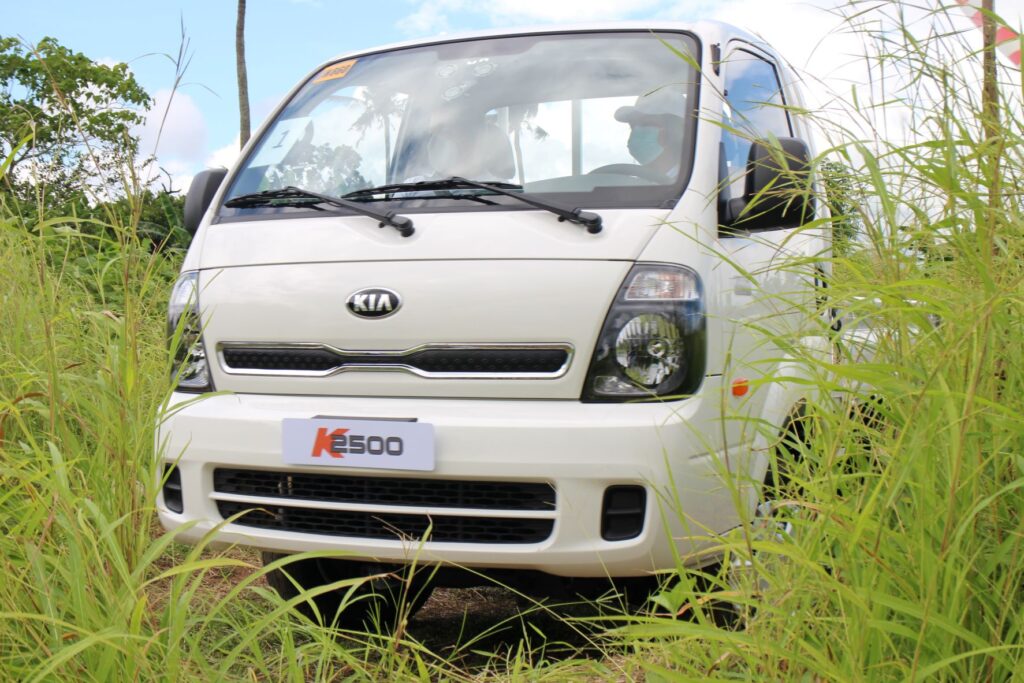