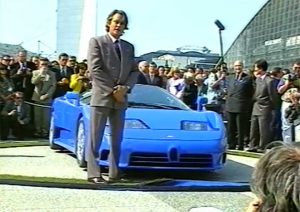 On September 15, 1991, the Bugatti EB 110 GT was unveiled at both Versailles and in front of the Grande Arche de la Défense, near Paris, exactly 110 years after Ettore Bugatti‘s birth. The mid-engine sports car’s design elements paid homage to the classic Bugatti automobiles. The factory, Bugatti Automobili S.p.A., was owned by Italian businessman Romano Artioli, and the name EB 110 was an abbreviation for Bugatti and his 110th birthday. 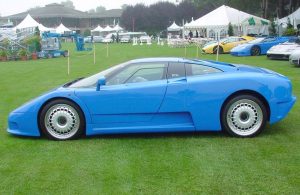 Development of the EB 110 started in 1988 and the design work was contracted to Italian automotive designer Marcello Gandini. Initial prototypes based on Gandini’s design began testing in 1989 but after Artioli and Gandini had conflicting ideas about the car’s radically angular design, Giampaolo Benedini replaced Gandini and was tasked to redesign the car. 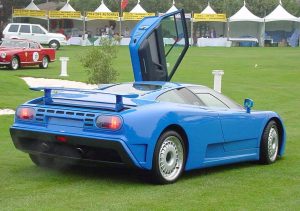 Benedini softened Gandini’s original radical design, reworked the front of the car, and moved the cooling ducts from the bonnet (hood) into the front bumper and near the two large fixed headlamps, which replaced the pop-up headlamps in Gandini’s original proposal. Some elements of the original design such as the scissor doors, large windshield, and side windows were retained. 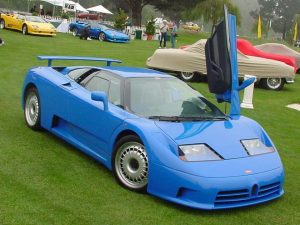 Technical director Paolo Stanzani, formerly of Lamborghini, designed most of the EB 110’s engineering. After Stanzani’s sudden departure from Bugatti, Nicola Materazzi, formerly of Lancia and Ferrari, was assigned to complete the development. Innovative technologies such as the carbon fiber monocoque chassis, active aerodynamics, and an all-wheel-drive (AWD) were installed in the Bugatti.

A glass engine cover provides a view of the 553-horsepower 3.5-liter 60-valve, quad-turbocharged V12 engine with 12 individual throttle bodies. Power is routed through a 6-speed manual transmission and sent to all four wheels. The carbon fiber chassis was built by Aérospatiale, an aircraft company, and uses a double wishbone suspension. A speed-sensitive electronic rear wing and active air flaps near the rear window that can be electrically actuated assist the car’s aerodynamics. 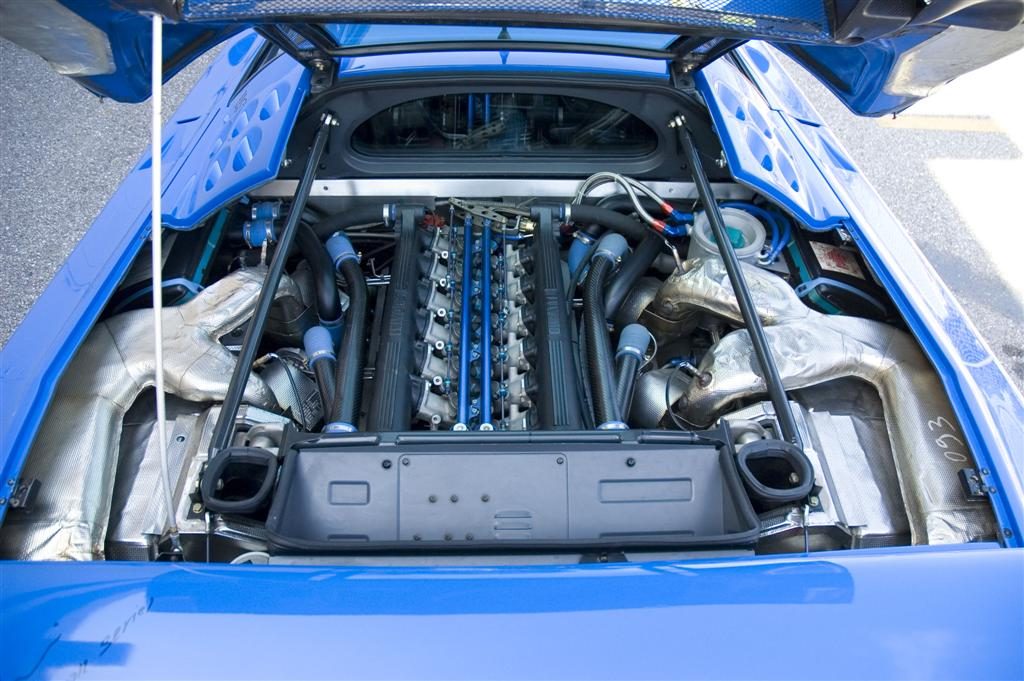 Just six months after the introduction of the EB 110 GT, a lighter and more powerful EB 110 Super Sport was introduced at the 1992 Geneva Motor Show. The 603-horsepower Super Sport variant was lighter than the GT by 150 kilograms by using carbon-fiber body panels on the exterior and in the interior. It can accelerate from zero to 100 km/h in 3.2 seconds and reach a top speed of 355 km/h. Formula One driver Michael Schumacher bought a yellow EB 110 Super Sport in 1994 and owned it until 2003. 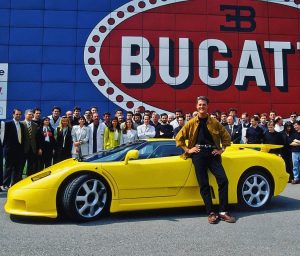 Unfortunately, over-ambition, bad business decisions, and rising expenses pushed Artioli’s company to bankruptcy in 1995 after making only 139 Bugatti EB 110 sports cars. The Volkswagen Group of Companies took over the Bugatti trademark in June 1998 and started a new chapter for the vaunted Bugatti brand when they delivered their first production Veyron 16.4 in 2005. 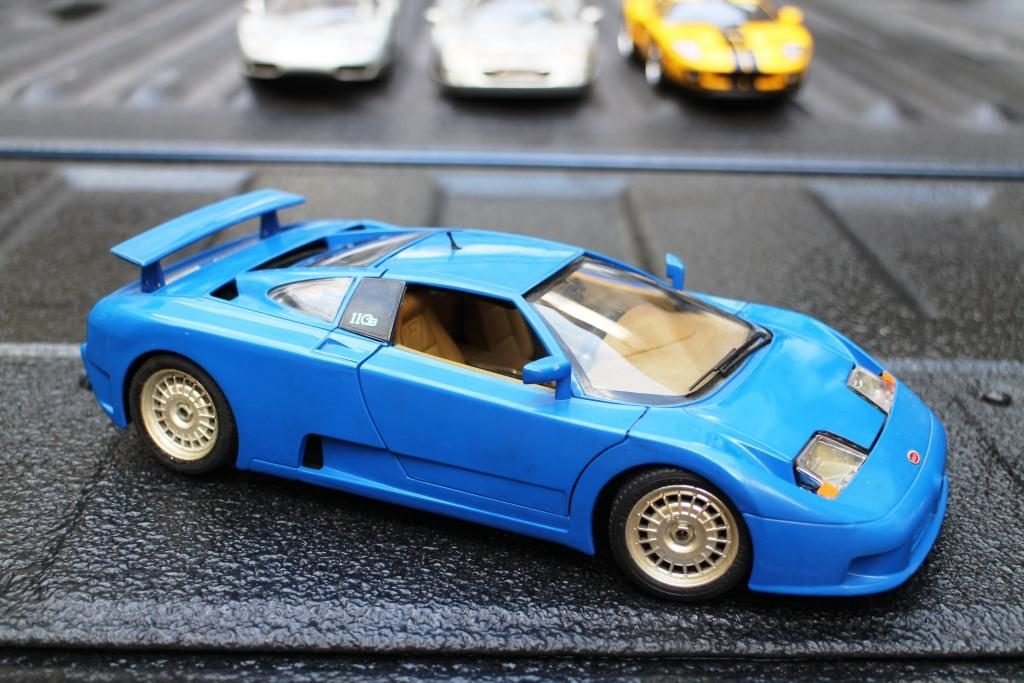 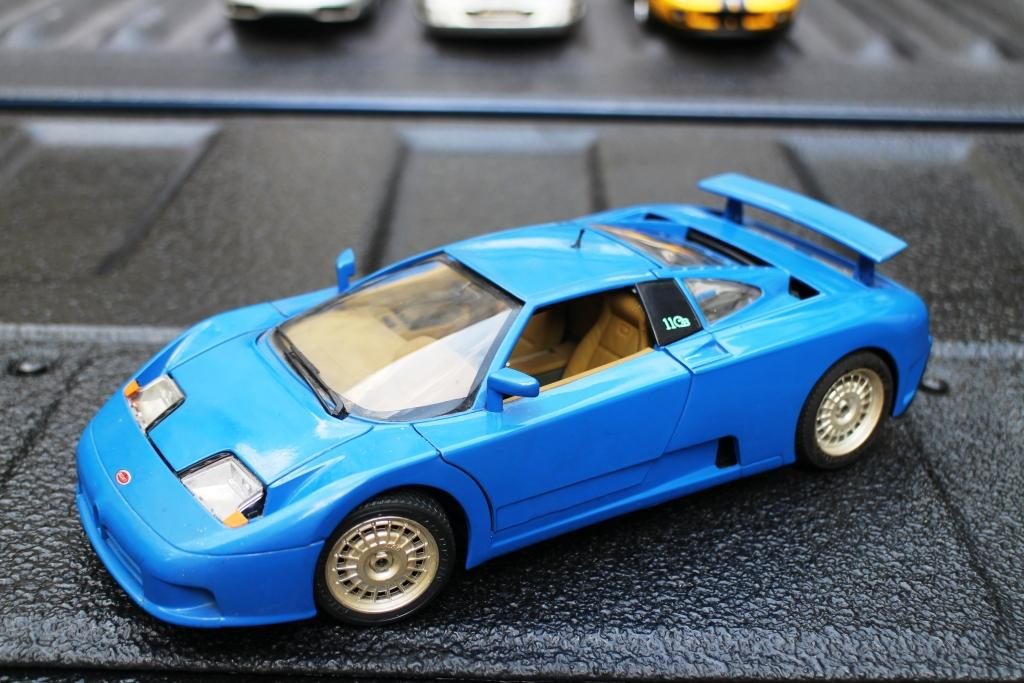 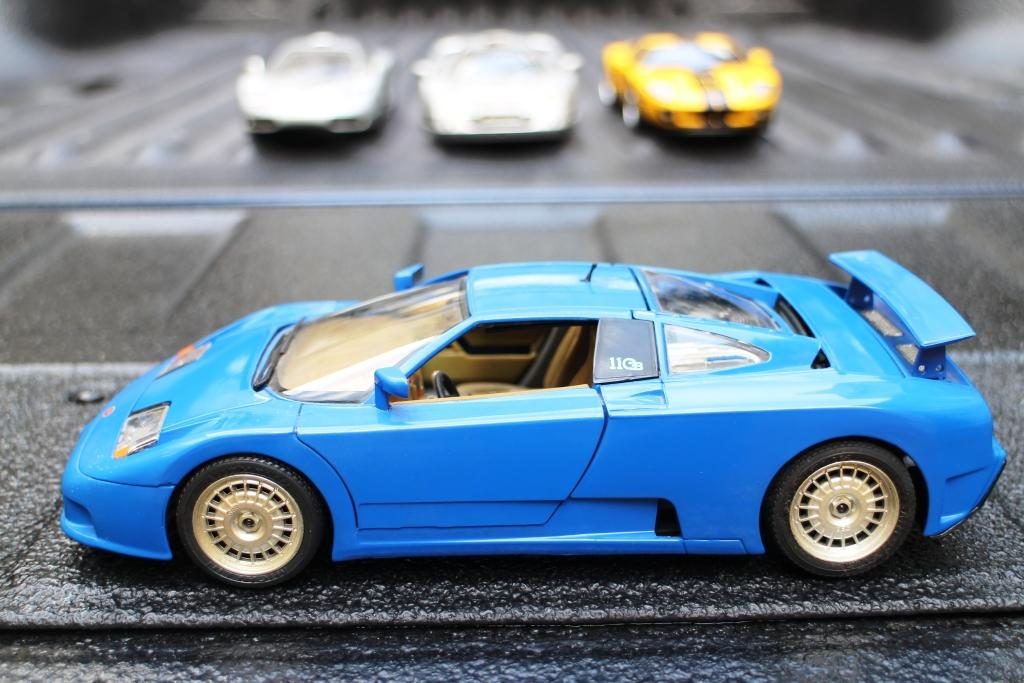 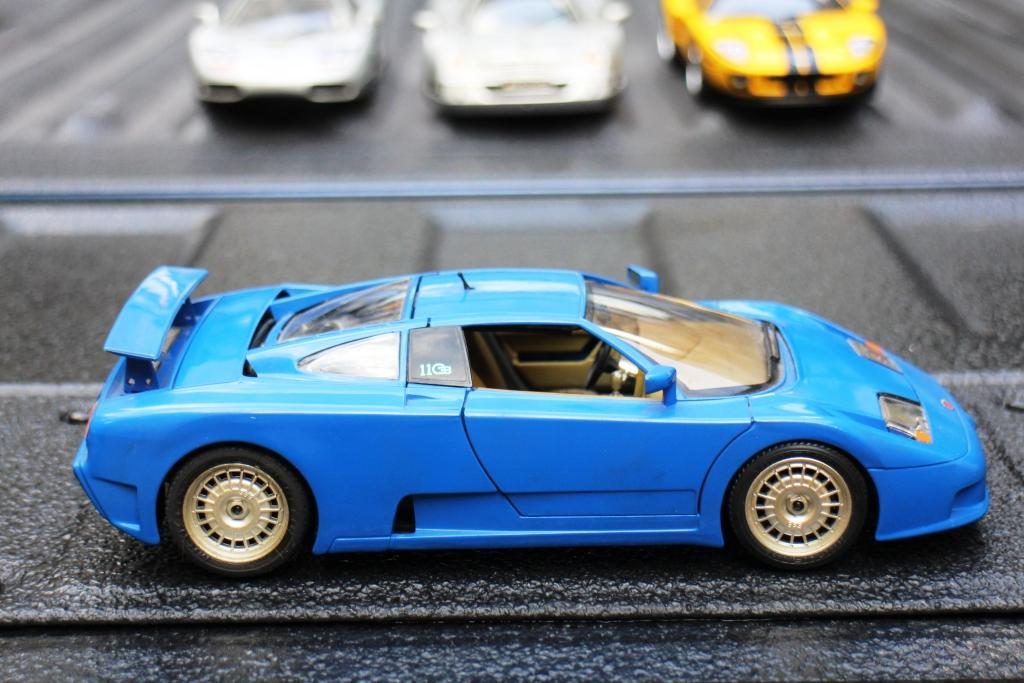 We got our French Blue Bburago 1:18 scale Bugatti EB 110 GT die-cast model sometime in the late ‘90s when it wasn’t considered a classic just yet. Its two biggest attractions was that a Formula One driver owns a real one and that Rustan’s Department Store slashed the prices of Bburago scale models, perhaps to move their stocks. Because of the attractive prices, we bought a couple of model cars, but at the early stages of our ownership, we found the Bugatti NOT as attractive as the other Bburagos that we bought from Rustan’s. 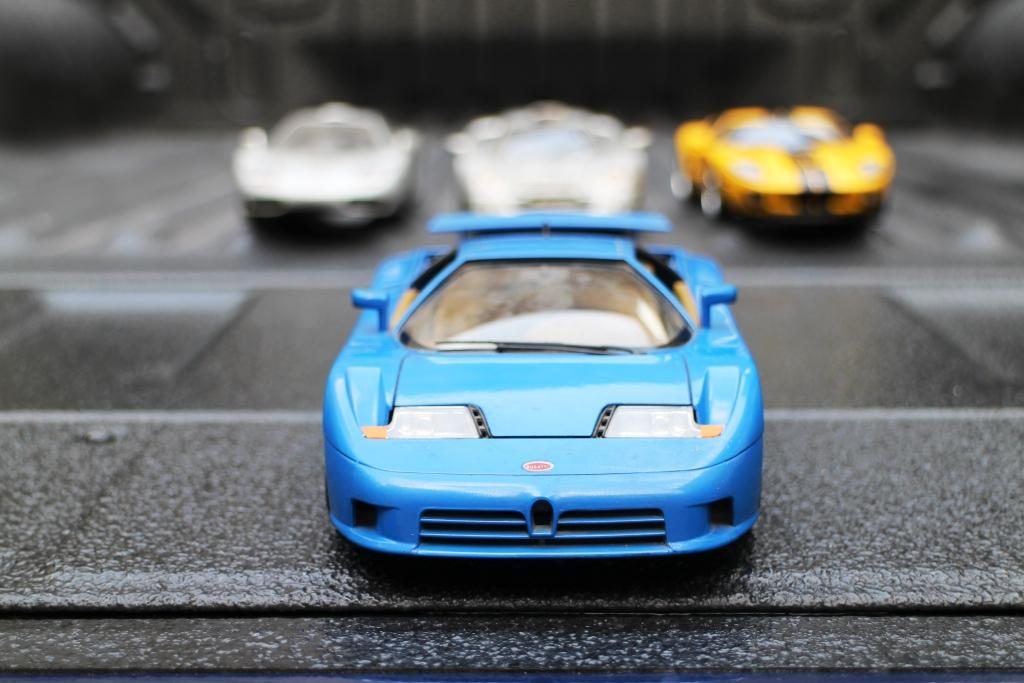 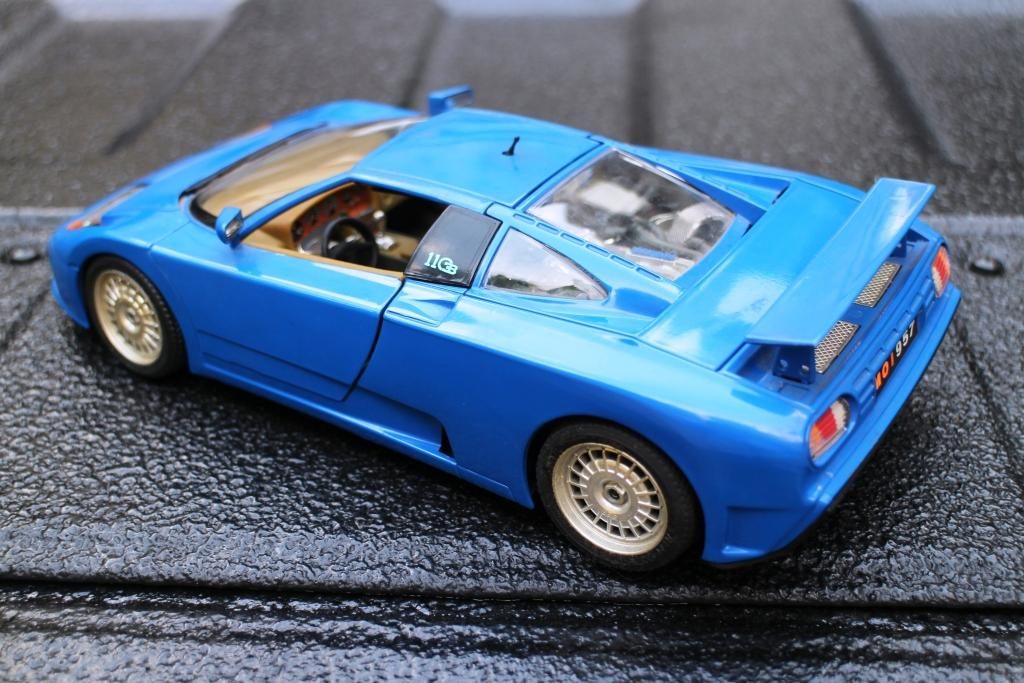 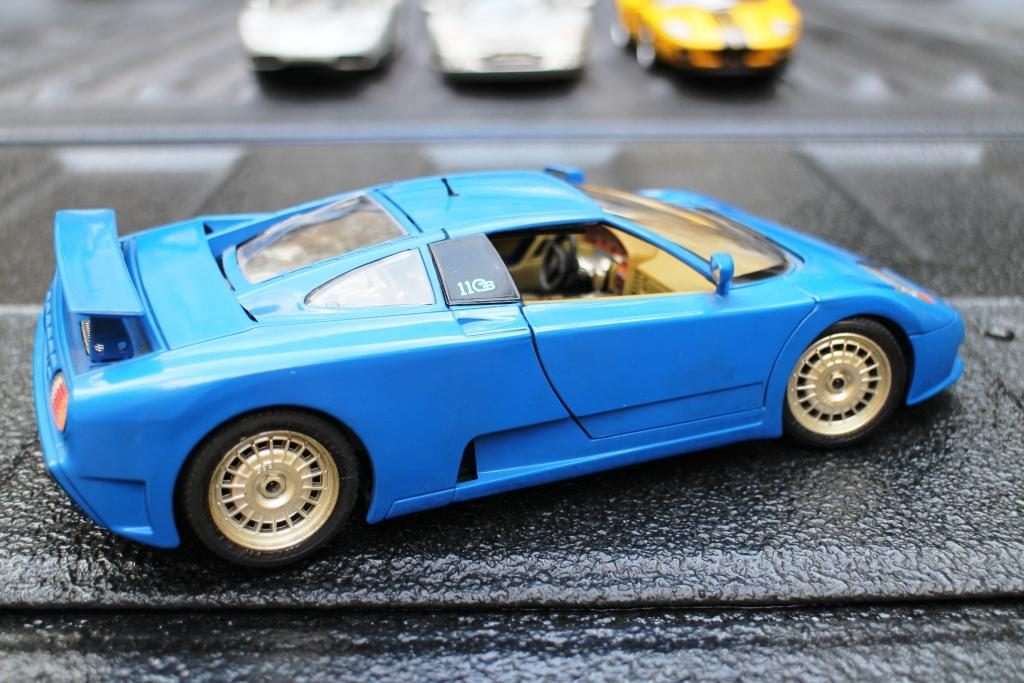 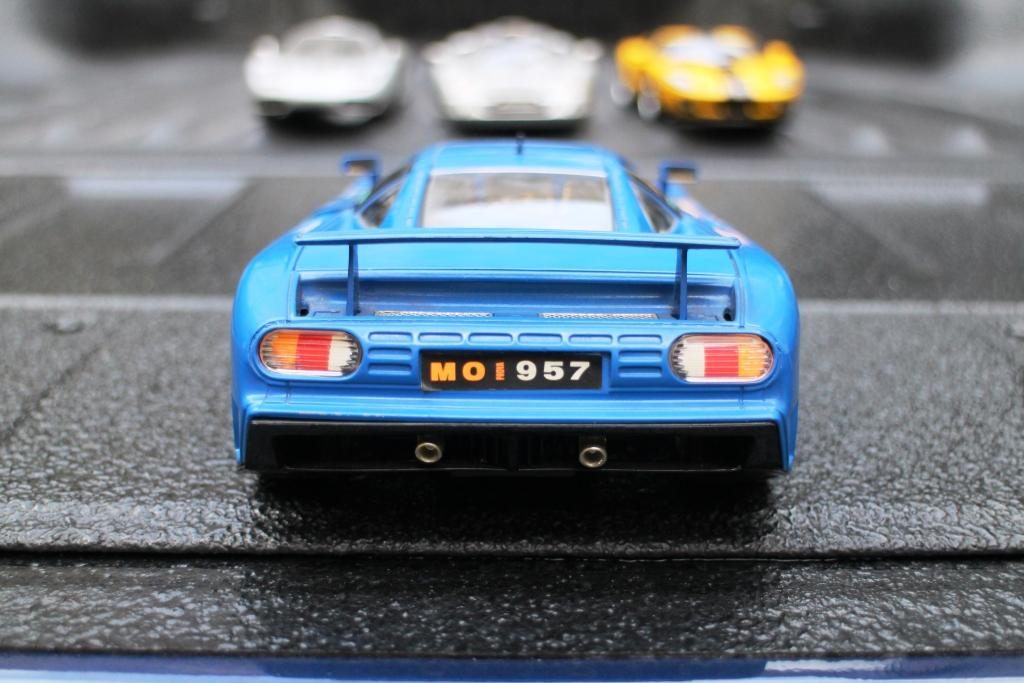 But things change over time and with actual 1991-1995 Bugatti EB 110 GTs and Super Sports fetching prices of up to $500,000, our little blue sports car suddenly looked a lot more interesting than it did before. After all, the great Michael Schumacher kept his EB 110 for nine years. We’ve had ours for more than 20 years now! 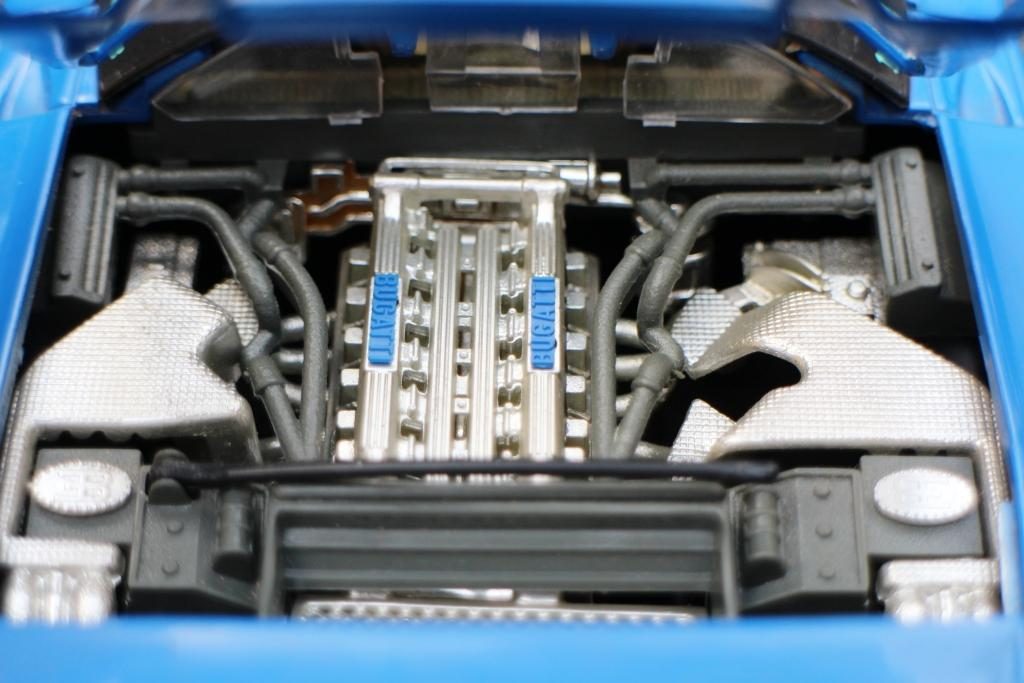 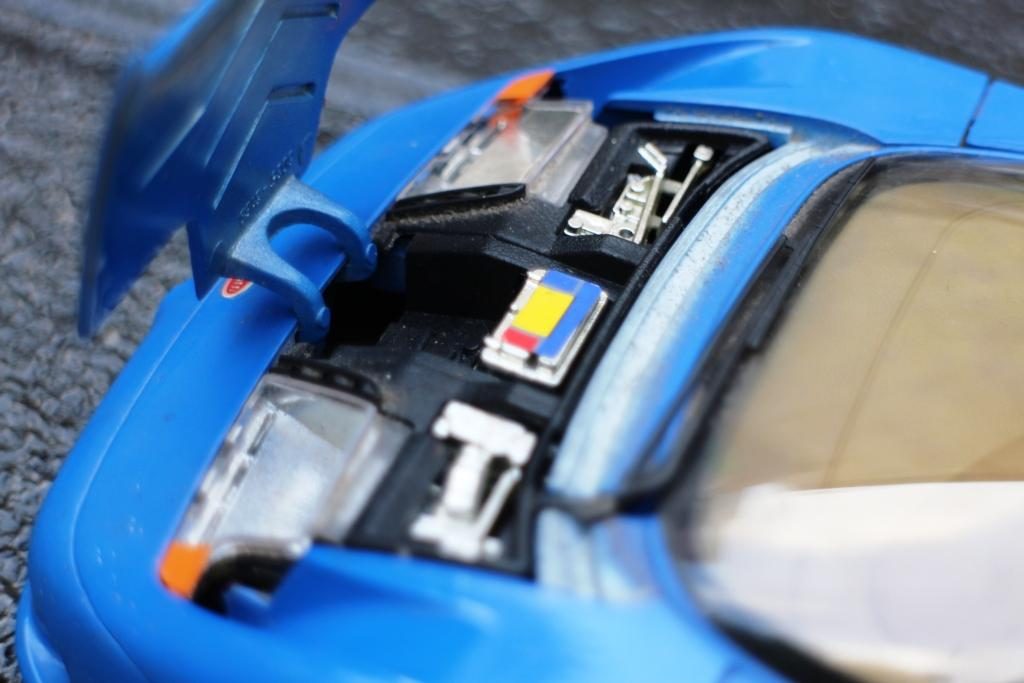 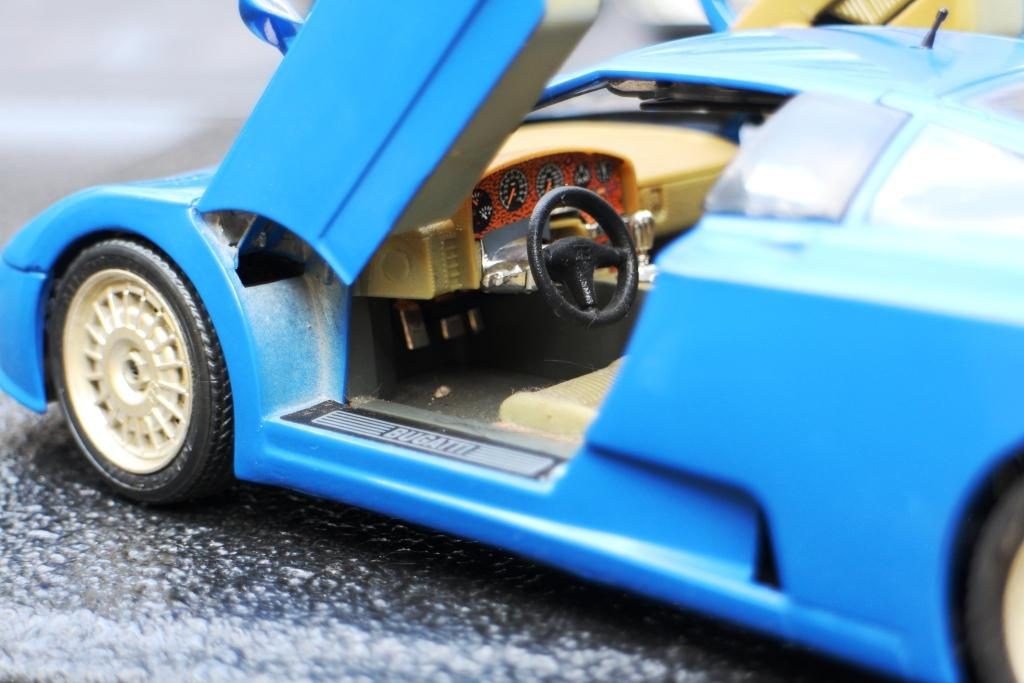 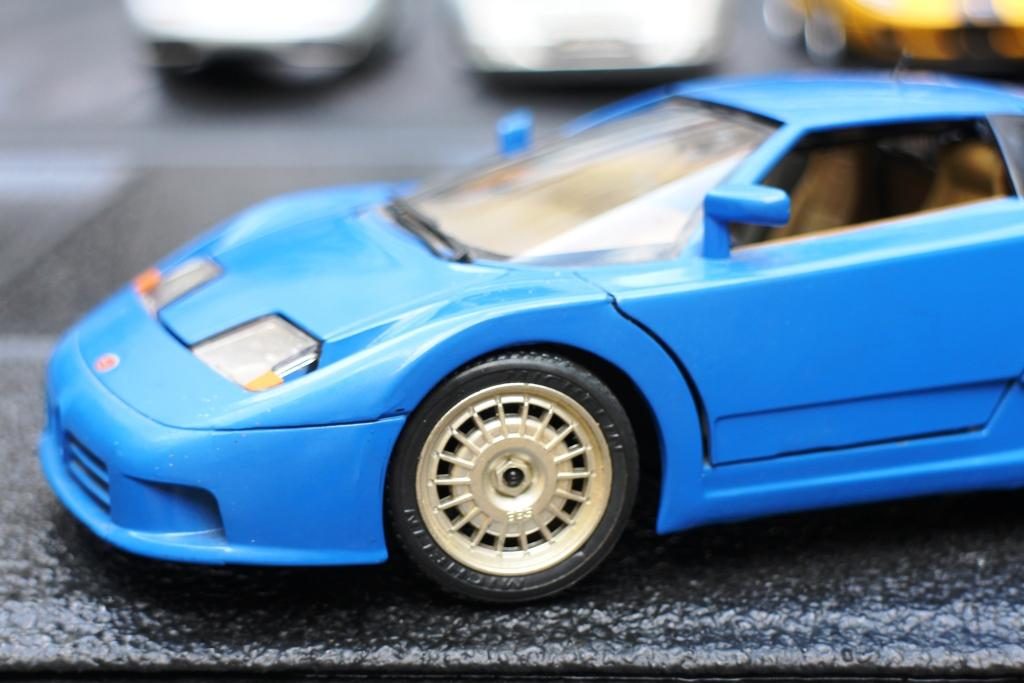 To review other scale model vehicles that we have previously posted here in the Power Wheels website, please click “The Rack” button on the header bar near the top right of your screen (if you’re using a PC, laptop or tablet), or type “The Rack” on the Search bar if you’re using a mobile phone. Our blue Bburago super car model will be followed by another super car, so log on back again tomorrow. Merci beaucoup! 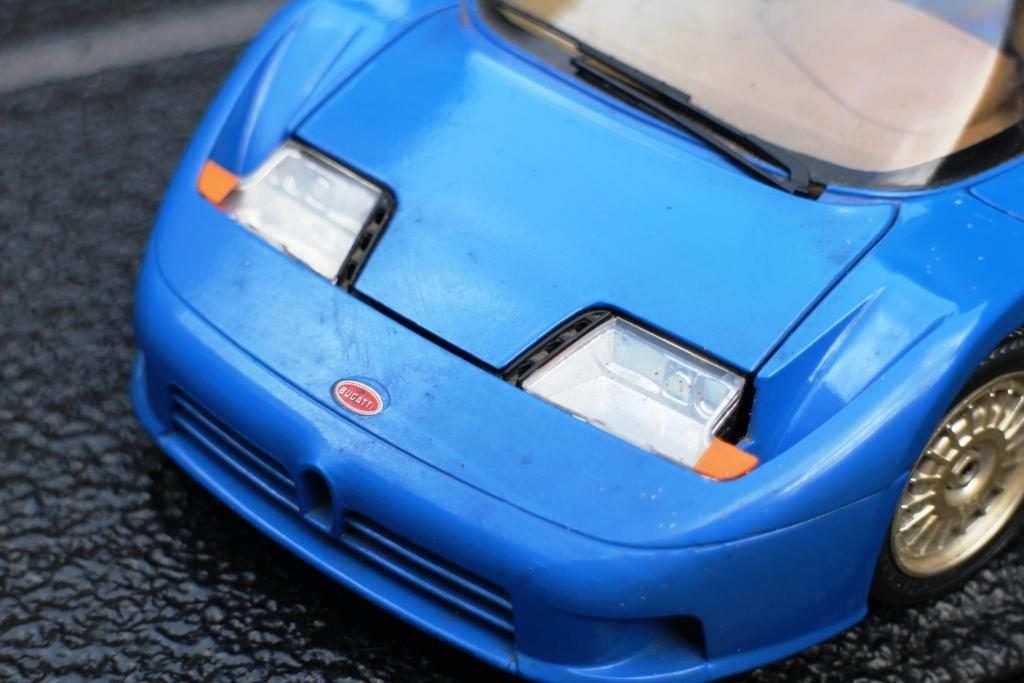 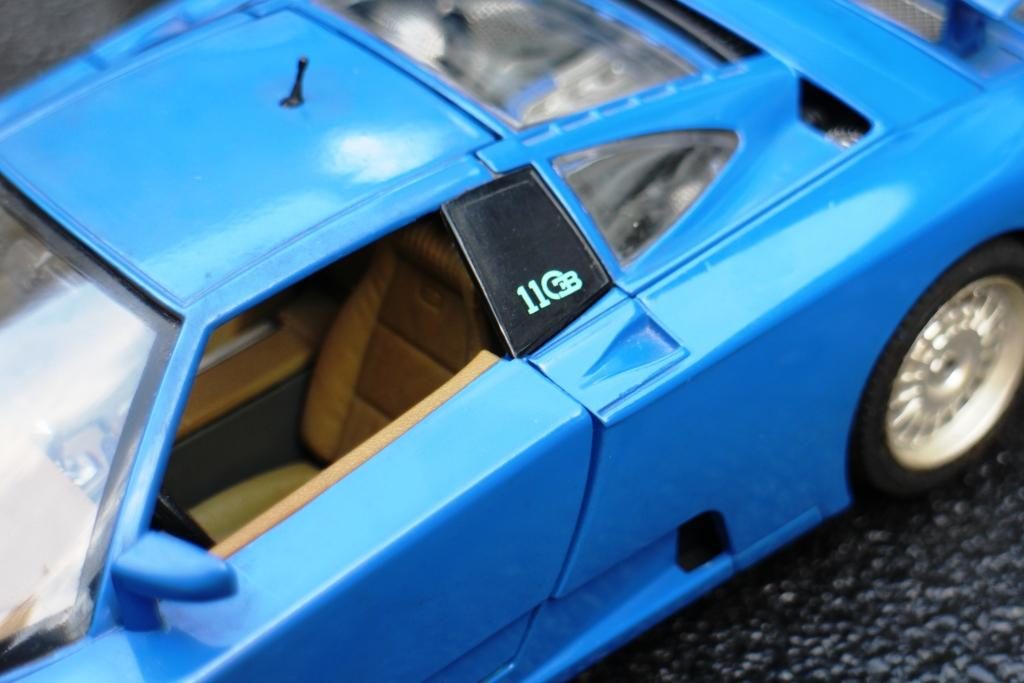 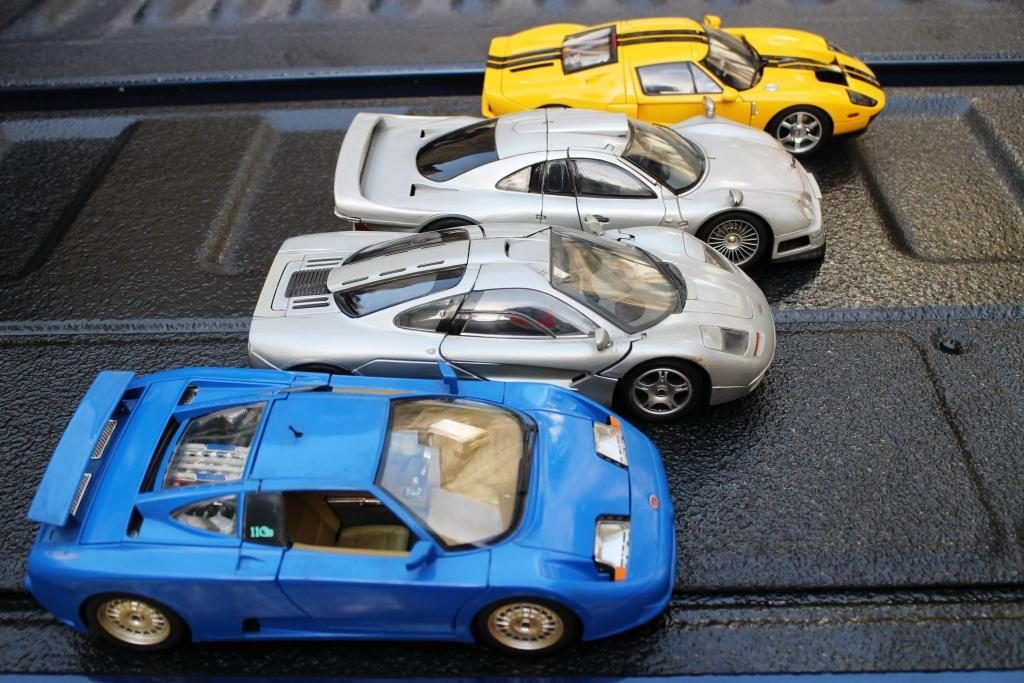