What is it about the Sixties that some people find so groovy? Besides the outrageous parties, psychedelic clothing, and the phenomenal growth of rock and roll, the ’60s were also the era of iconic automobiles. In our modest collection of scale model cars, I found three miniature sports cars that were born in the late 1960’s and eventually became icons of their genre. Here for your viewing pleasure are our Toyota 2000GT, our Lamborghini Espada, and our Chevrolet Corvette. 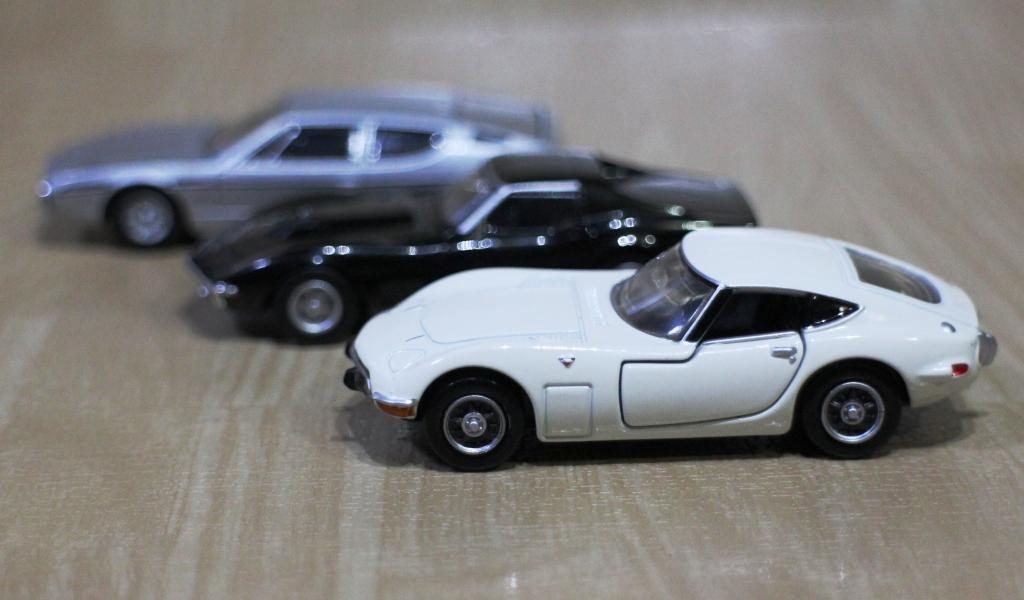 The 2000GT was a sports car produced in very limited numbers by Toyota in cooperation with Yamaha. Introduced at the 1965 Tokyo Motor Show, only 351 2000GTs were built between 1967 and 1970. Power came from a 2.0-liter inline-6 Toyota 3M engine from the Crown sedan that was modified by Yamaha with a DOHC cylinder head and three 2-barrel Solex side draft carburetors. With a 5-speed manual transmission, limited-slip differential, and power-assisted disc brakes on all four wheels, the 2000GT can reach a top speed of 217 km/h. This car revolutionized the car enthusiasts’ view of Japanese cars and it showed that Japan can produce a sports car to rival those of Europe. 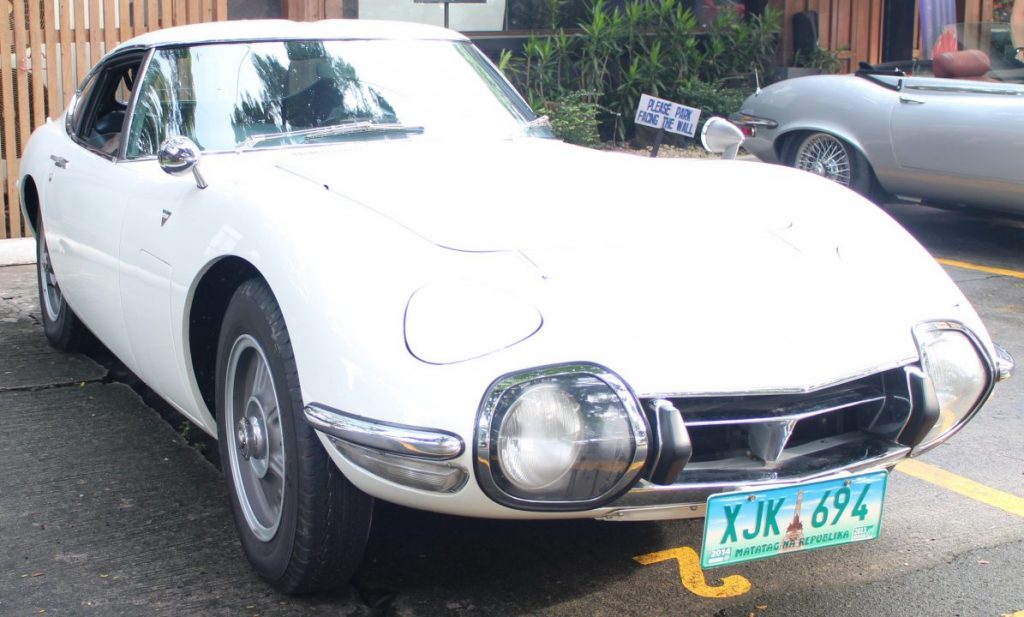 This immaculate and pristine Toyota 2000GT is owned by Mike Aguilar and was lovingly restored to original concours condition. 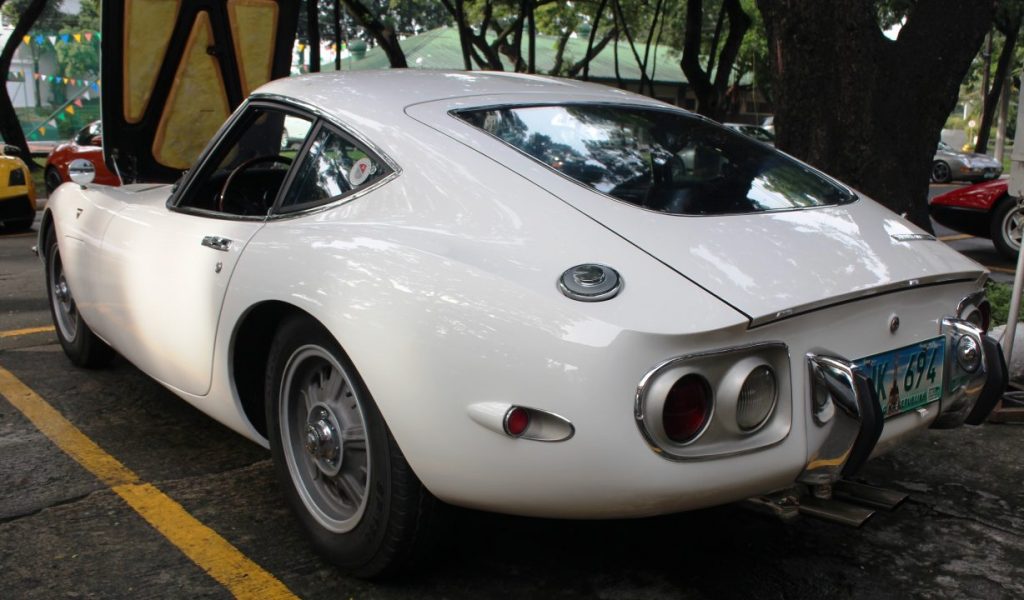 Despite its rarity, this 2000GT is no garage queen. It is often driven by Mike to club meets with the Manila Sports Car Club.

Because there were only a limited number of 2000GTs produced, its value as a collector car has skyrocketed. Since we obviously cannot afford a real one, we went for something that we can – a 1:59 scale die-cast model made by Tomica. Our Tomica 2000GT was finished in white, the national racing color of Japan, and it features opening doors and accurate detailing. The wheels of our miniature look like the original magnesium alloy wheels of the original car. The dimensions and scale are almost spot-on, although the 2000GT is a tad more svelte than the Lamborghini and the Corvette in real life. We can only blame the differences in the scales of our three model cars. 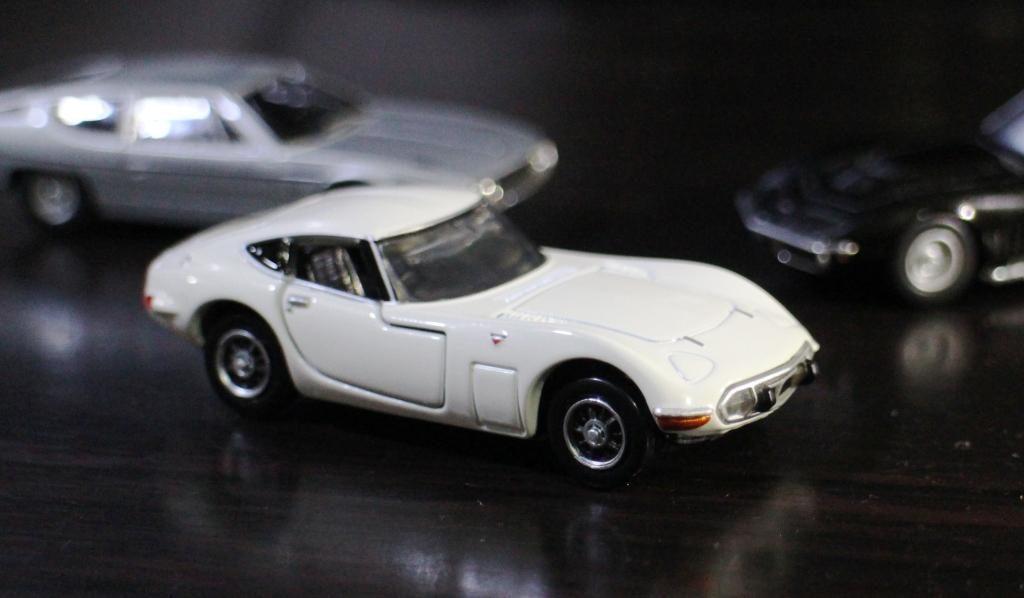 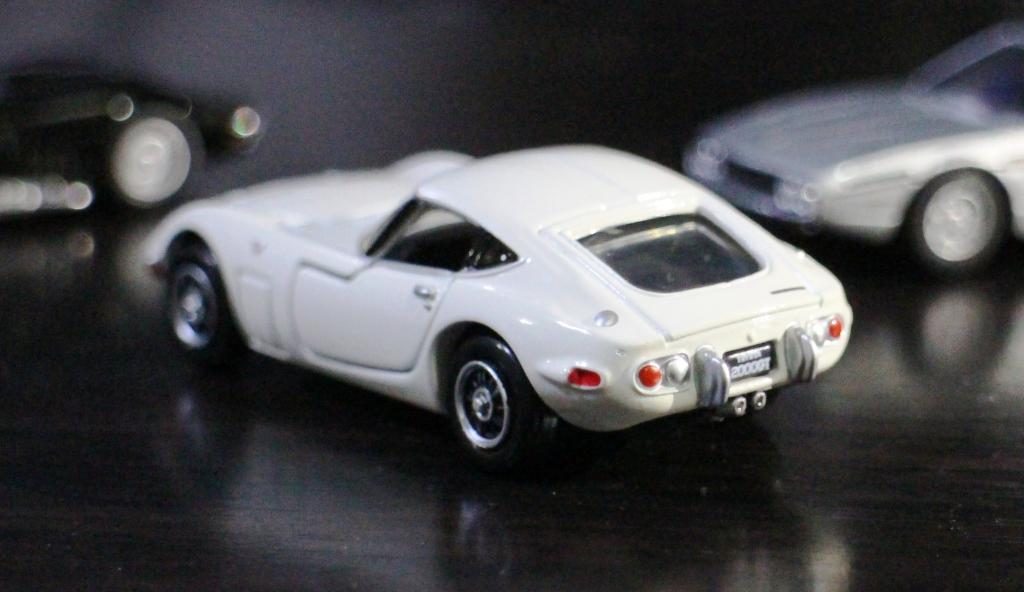 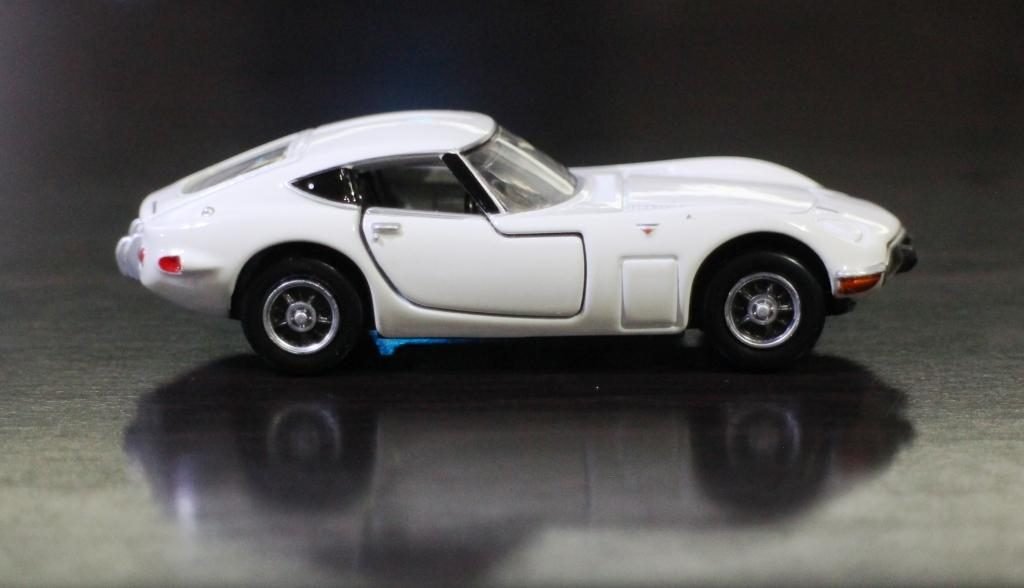 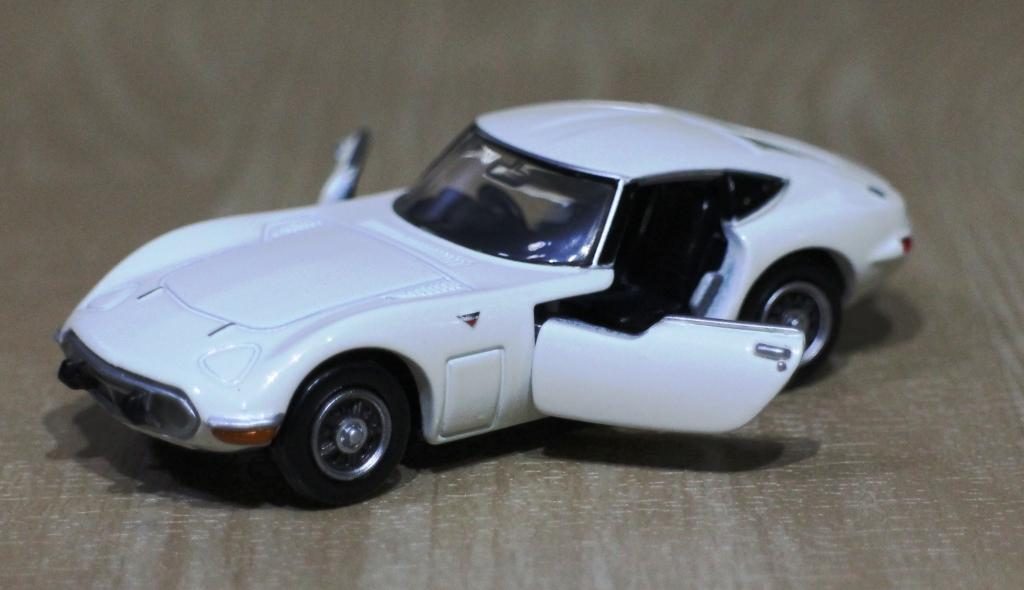 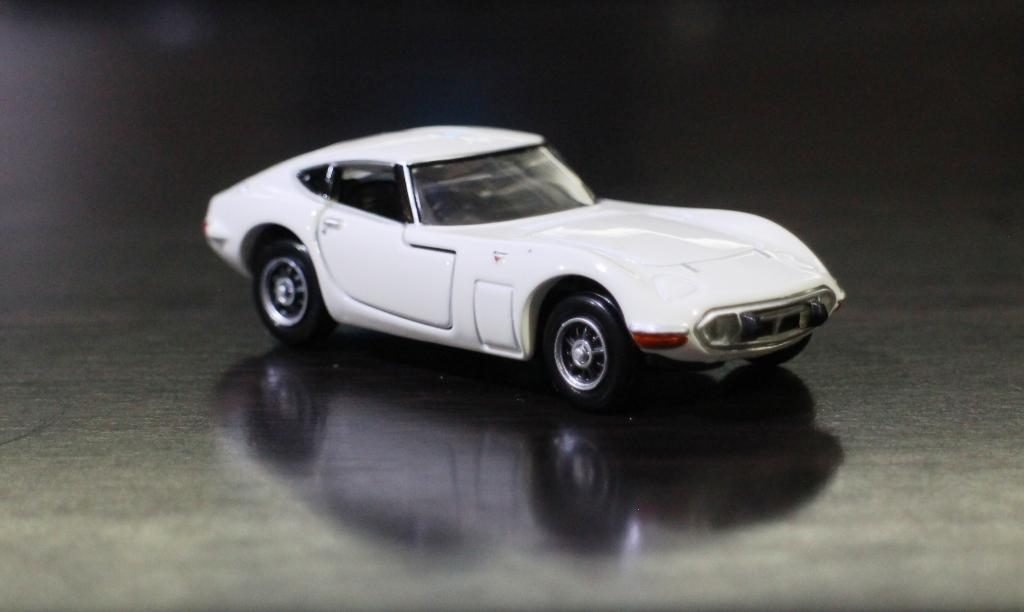 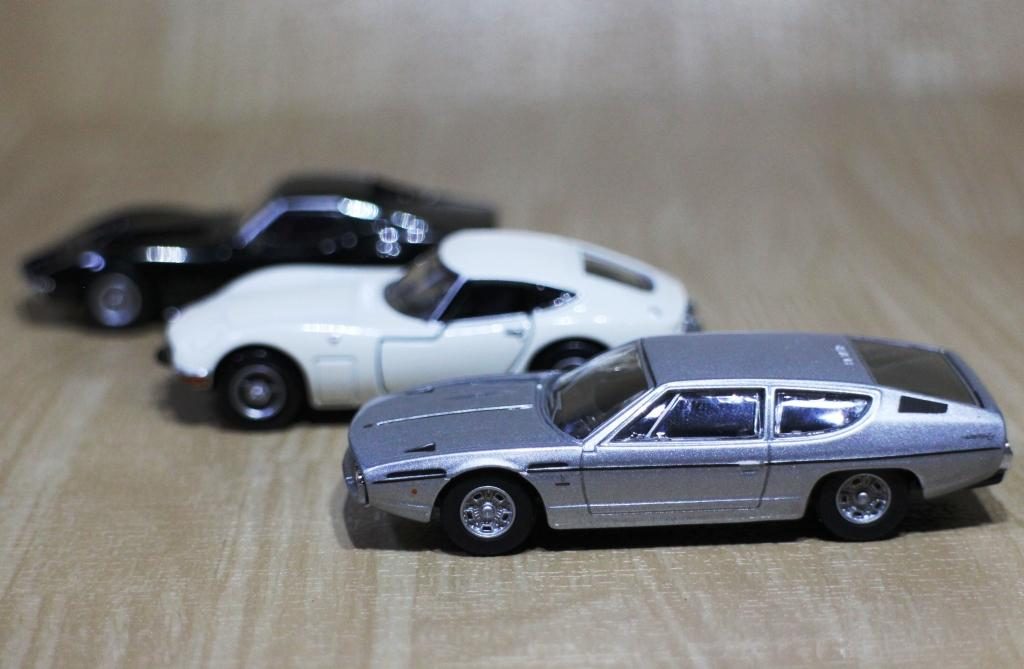 At the 1968 Geneva Motor Show, Lamborghini launched the Espada, a visually-daring 4-seat Grand Touring (GT) coupé designed by Marcello Gandini at Bertone. The Spanish name “Espada” means “sword” and refers to the bladed weapon that the torero uses to kill the bull in the corrida. The car was powered by a 3.9-liter Lamborghini V12 engine rated at 325 hp. Octagonal housings for the main instruments and a separate binnacle for the secondary gauges define the interior while Campagnolo alloy wheels with knock-off hubs define the low-slung exterior. From 1968 to 1978, the Espada underwent a series of changes with the S1 (1968–1970), the S2 (1970–1972) and the S3 (1972–1978) until a total of 1,217 Espadas were made. 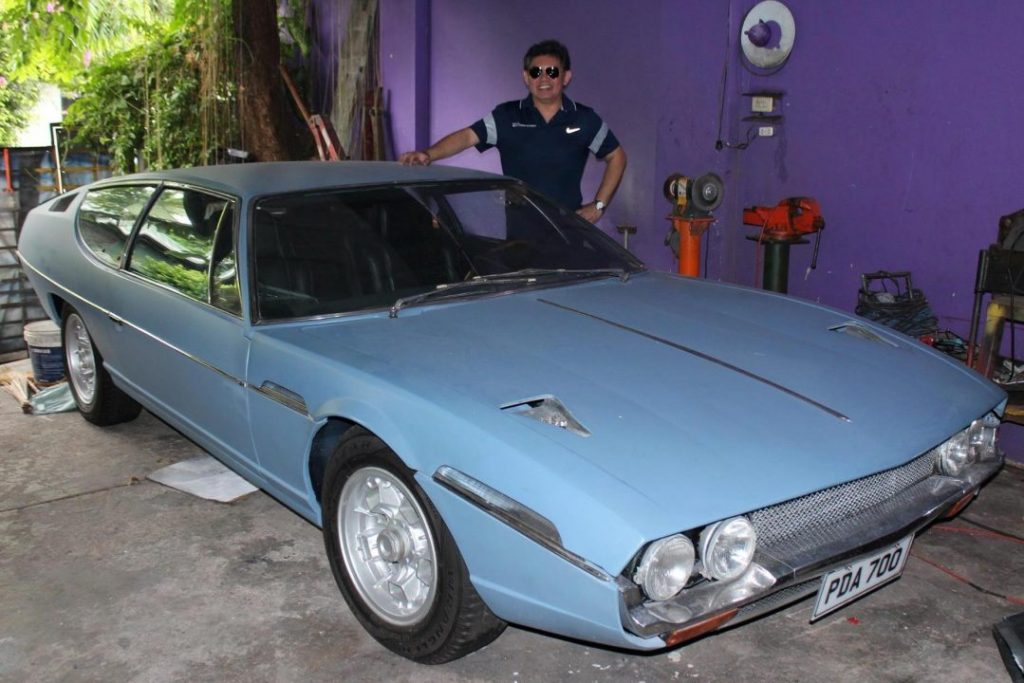 The author poses with the Lamborghini Espada project of Cito Beltran. It was restored to roadworthy condition… 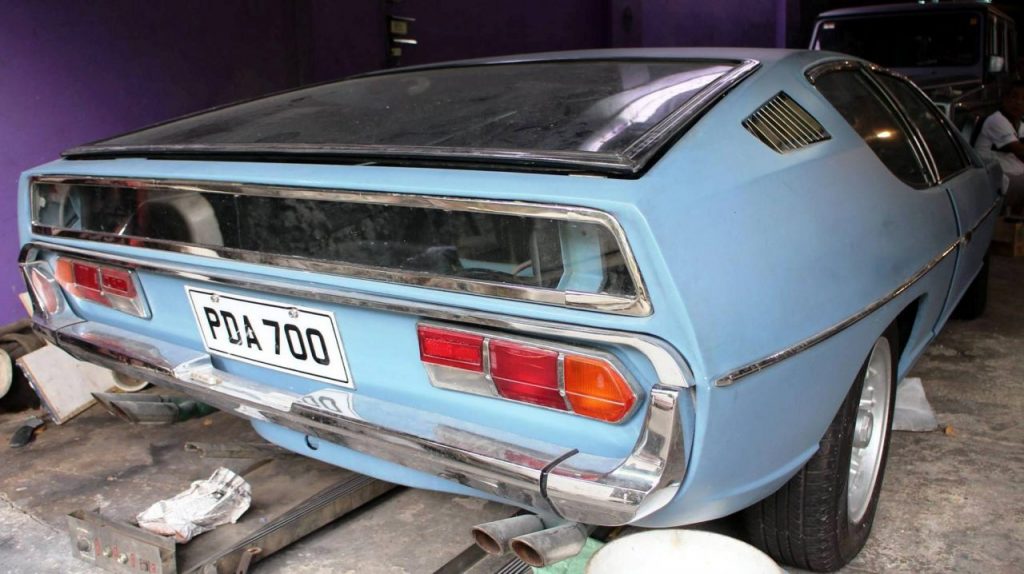 … although not necessarily concours-correct. But you have to admit, this is one cool-looking, groovy sports car!

Our Lamborghini Espada is a Kyosho 1:64 scale die-cast model finished in a conservative shade of metallic silver. It appears to be a Series 1 (S1) Espada but unfortunately, the doors, hood and rear glass hatch all DO NOT open. On the plus side, the car is nicely finished, the paint is smooth and glossy, and the overall details are almost accurate.  Eagle-eyed observers will note that the rear panel above the tail lamps of an actual Espada is made of glass (for the driver to see better when backing the long and wide sports car) while our Kyosho model’s panel is made differently. However, Kyosho did such a great job on making this 1:64 die-cast model car almost realistic that it would be too much to ask for more accuracy. 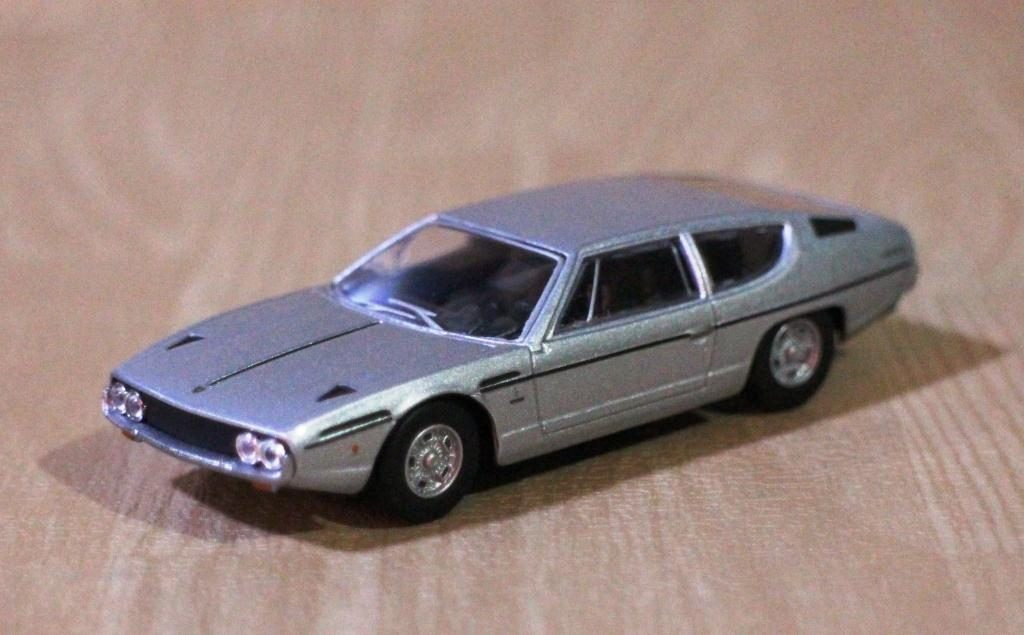 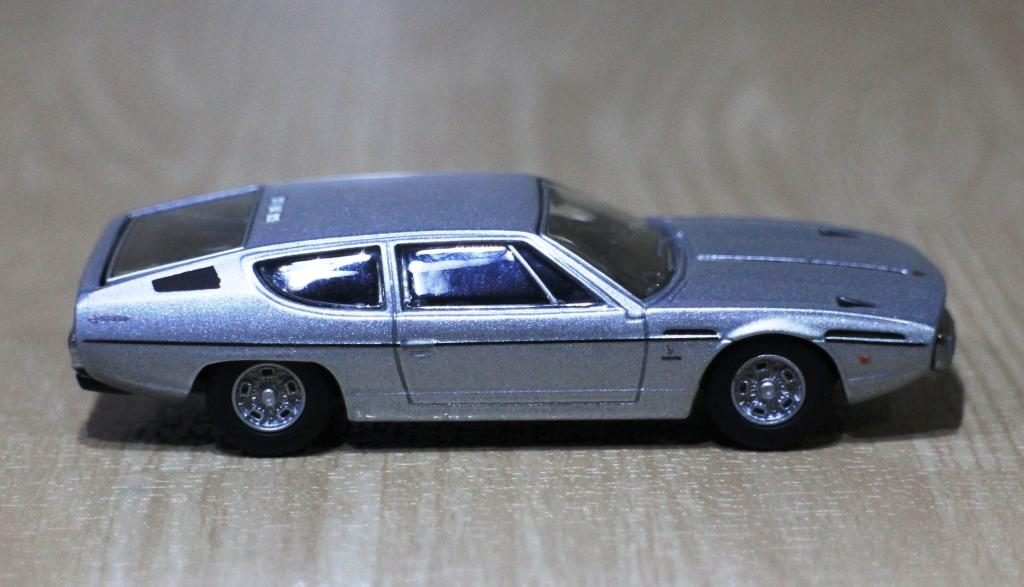 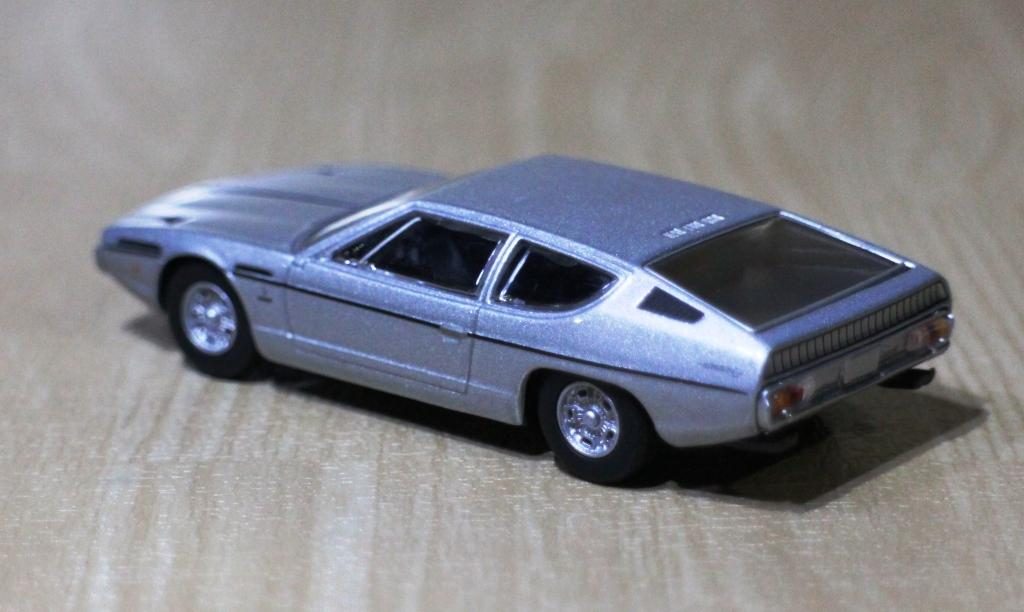 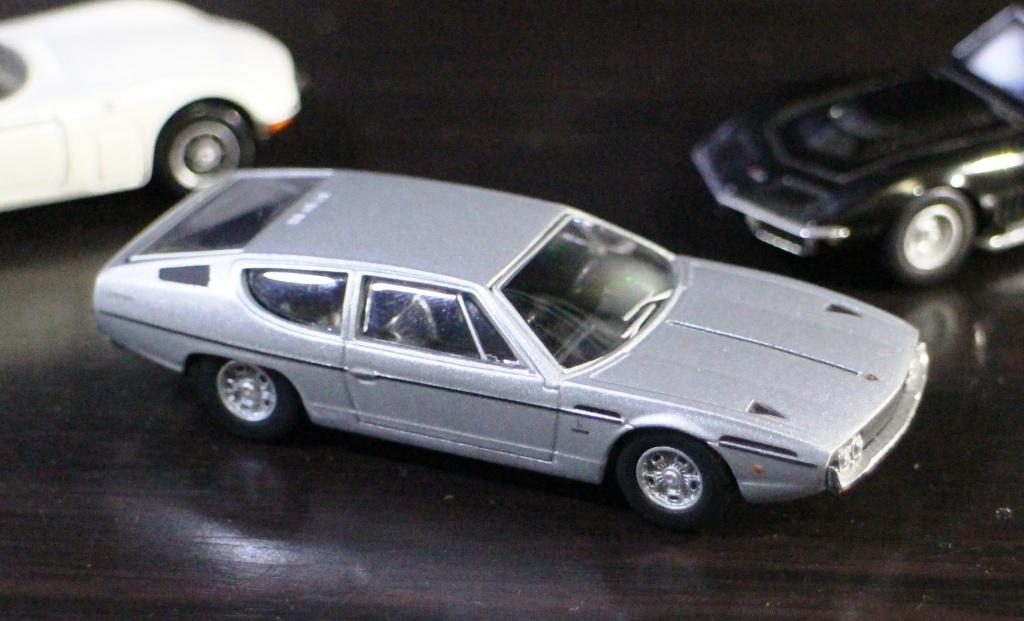 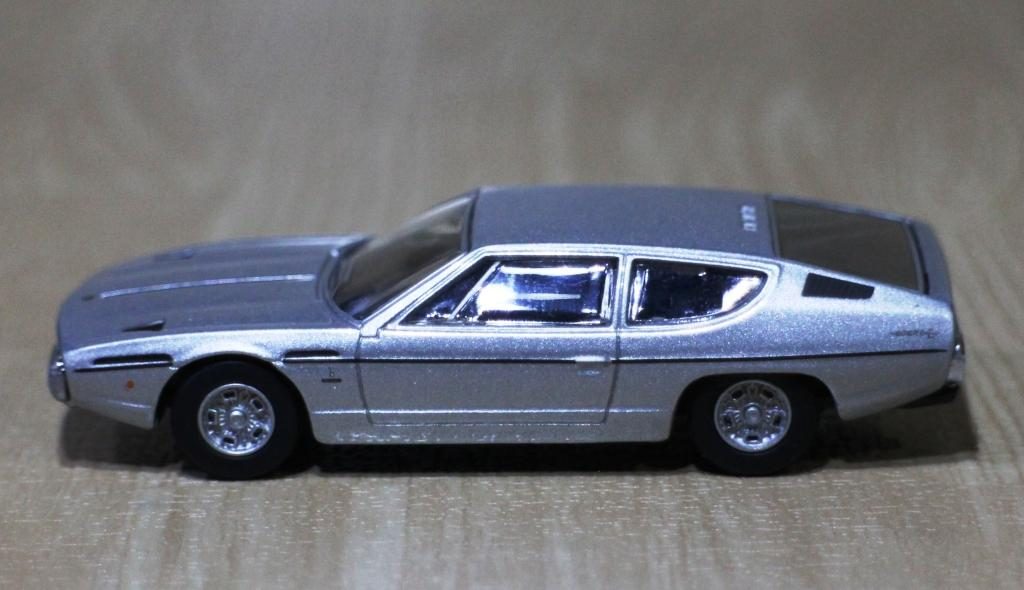 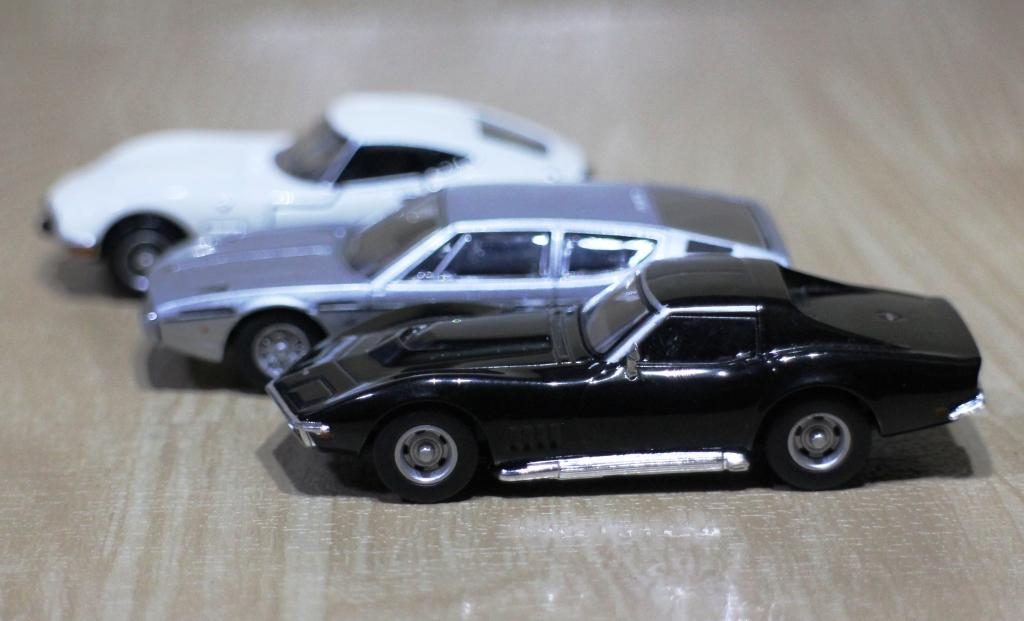 Among these three sports cars, the Chevrolet Corvette boasts of the longest production life span and the most number of units produced. The Coke-bottle-shaped third-generation Corvette (C3) was made from 1968 to 1982 and its powertrain choices vary from the base 5.0-liter 300-hp small block Chevy 327 V8 to the 7.4-liter 500-hp big block 454 V8. These American sports cars were labelled as “Stingray” from 1968 to 1976, which is different from the “Sting Ray” moniker used on the 1963-1967 second-generation Corvette (C2). In 1979 alone, 53,807 Corvettes were produced, outnumbering the total production of the Lamborghini Espada and Toyota 2000GT combined, which makes the Corvette a collector car that an average car enthusiast can afford. 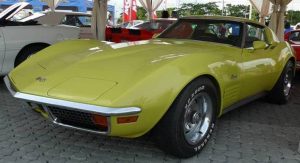 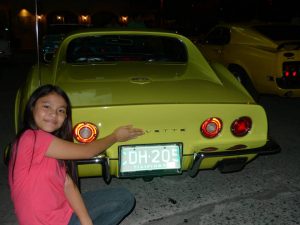 The author’s daughter, Vette, saw her name on the car. Now, she wants her name on the title of the Corvette. (Uh, let’s start with the miniatures ones first, please? – Ed.)

Like the Lamborghini, our 1:64 scale die-cast Corvette model is made by Kyosho. Like the Espada, its doors and hood DO NOT open and the T-Top is fixed and cannot be removed. But, like the Lambo, the detailing of our little black Corvette is spot-on and includes a smooth, glossy finish, chrome side pipes, chrome bumpers (correct for 1968-72 models), the iconic 4 round tail lamps, and the correct miniature 15×8 Rally wheels with the “Mexican hat” center caps. The hood design suggests that the engine is a 427 big block while the four vents on the side of the front fender suggests that it’s a 1968 model. 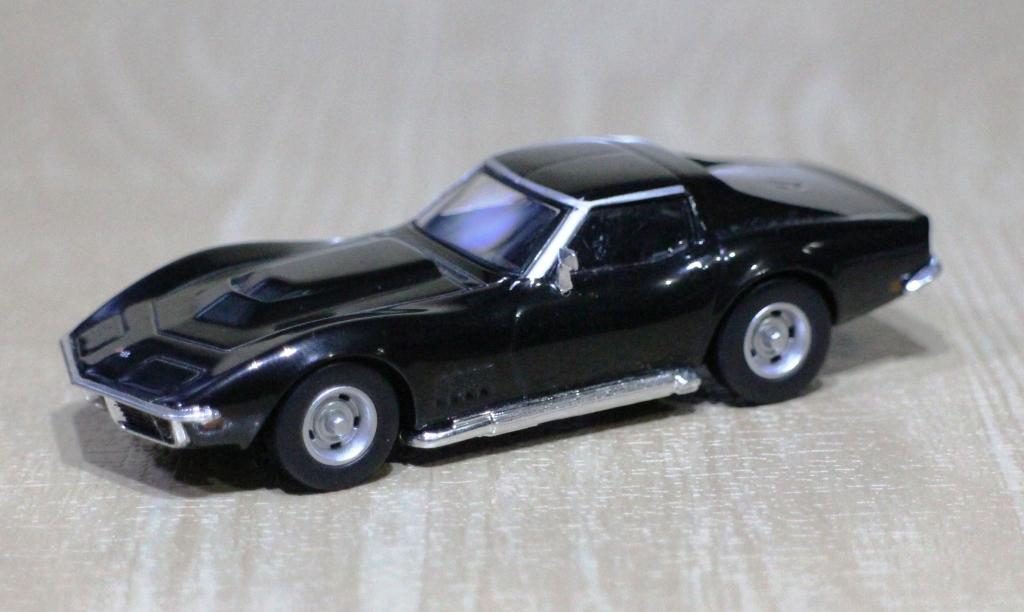 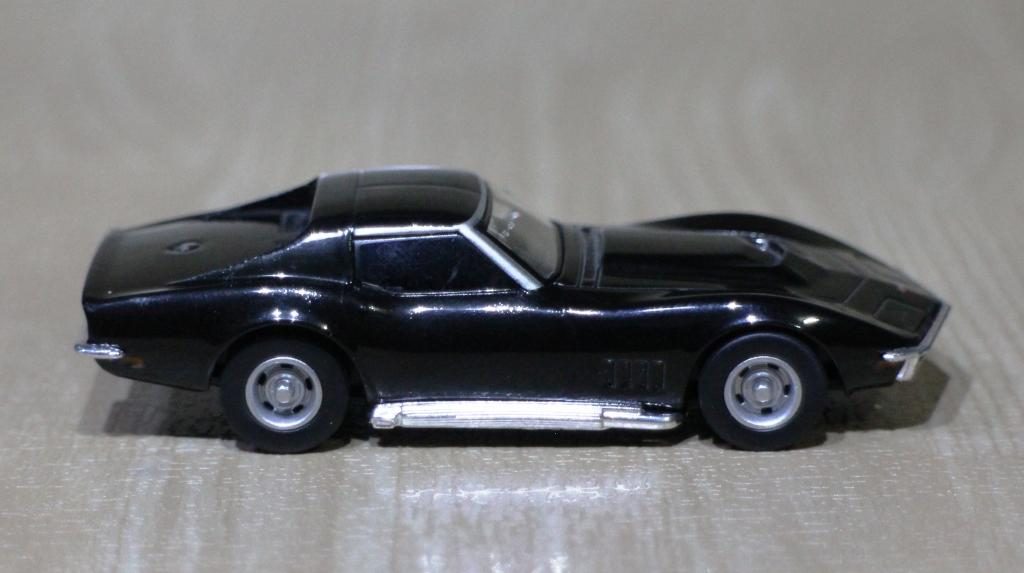 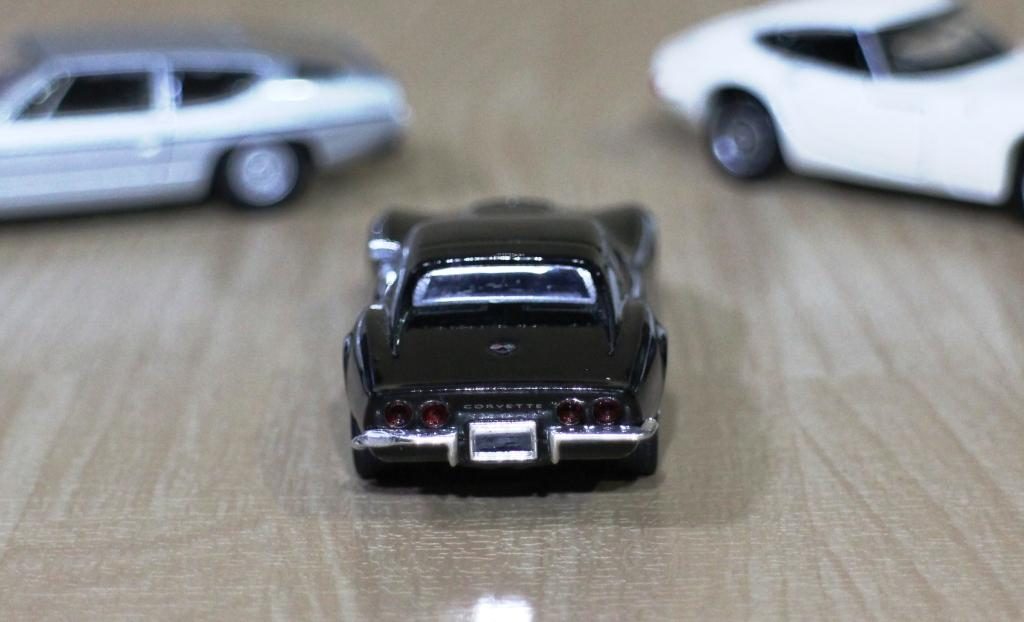 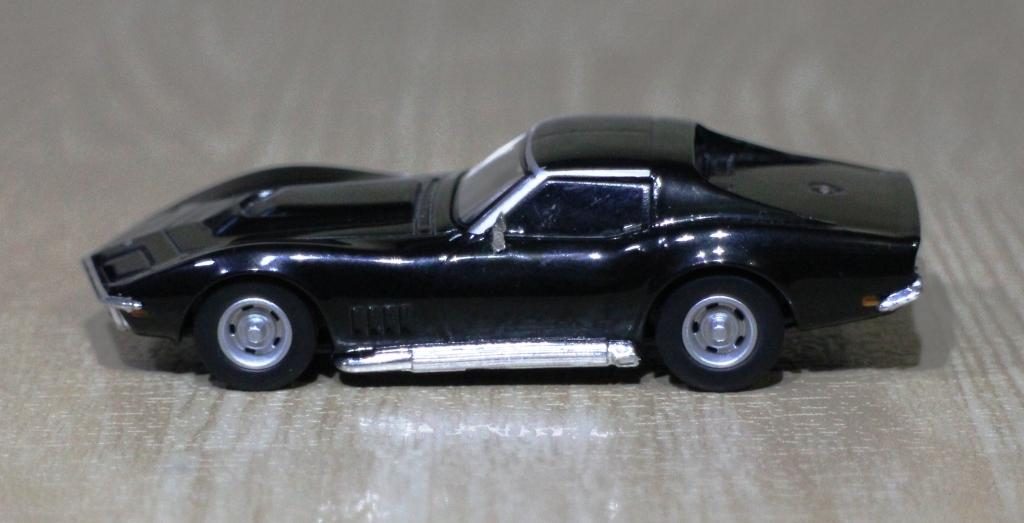 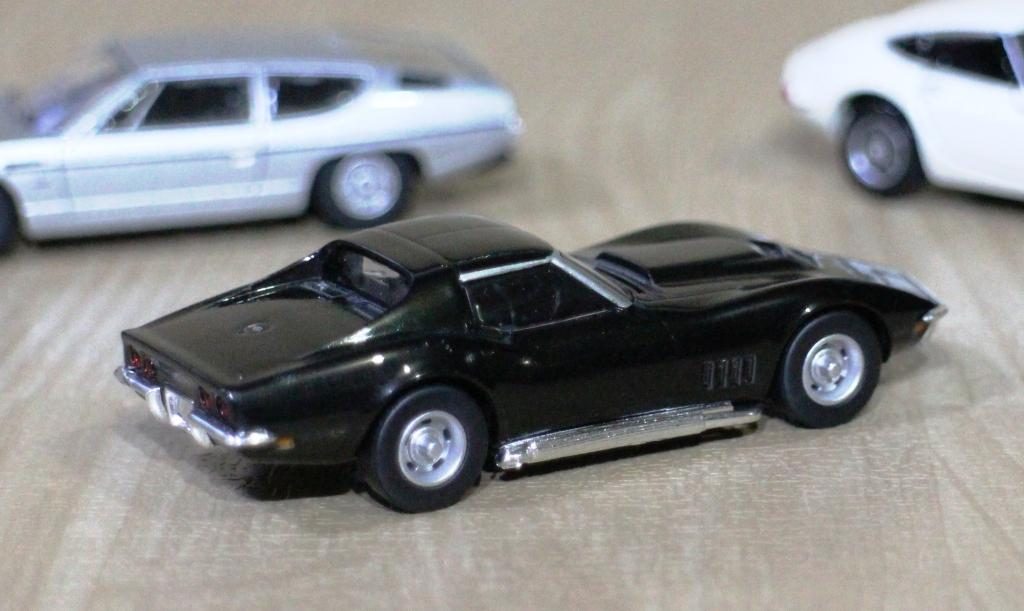 These three miniature die-cast cars represent the best technologies and designs of the car manufacturers at the time. Lamborghini would eventually define V12 super car performance while Chevrolet will continue to champion the push-rod V8 to power the Corvette up to the current 8th generation (C8) model. Toyota will continue what they started with the 2000GT by mass-producing a 6-cylinder performance car called the Supra. These three sports cars from Japan, Italy and America all deserve their rightful place in automotive history. 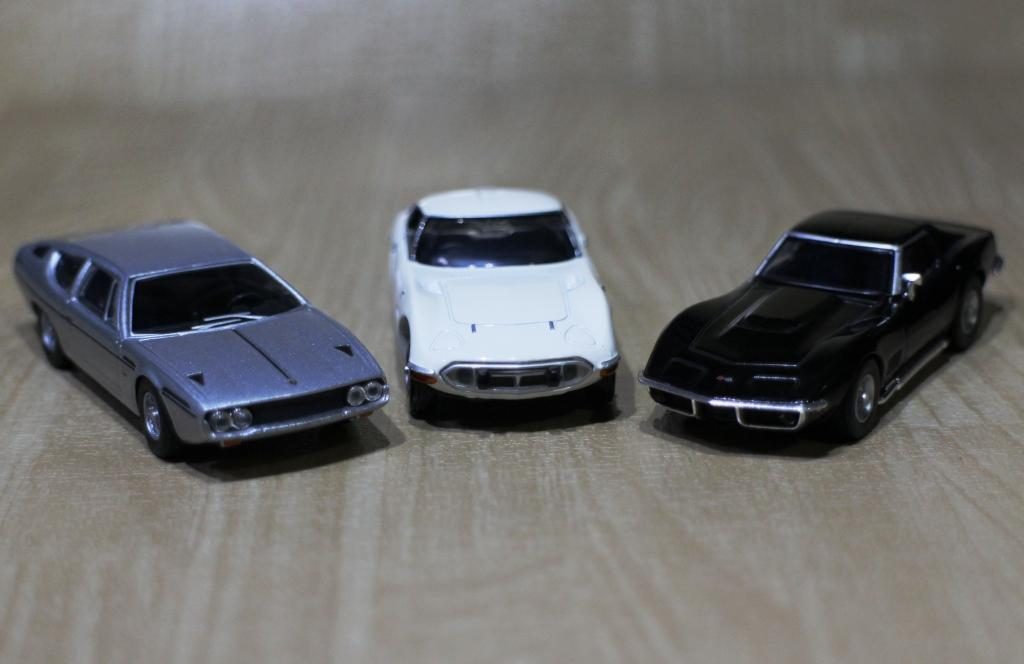 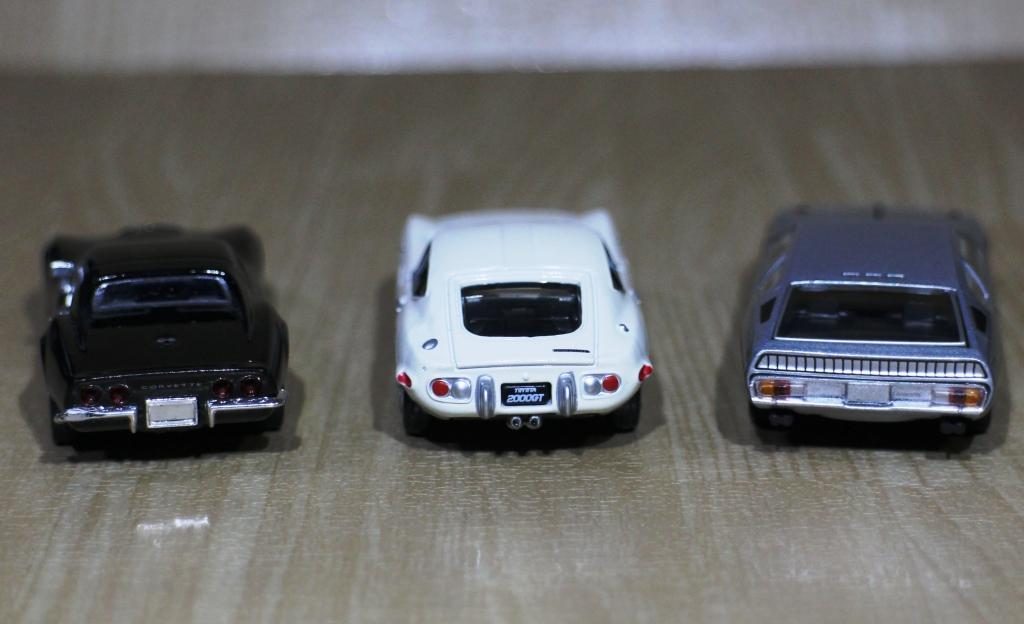 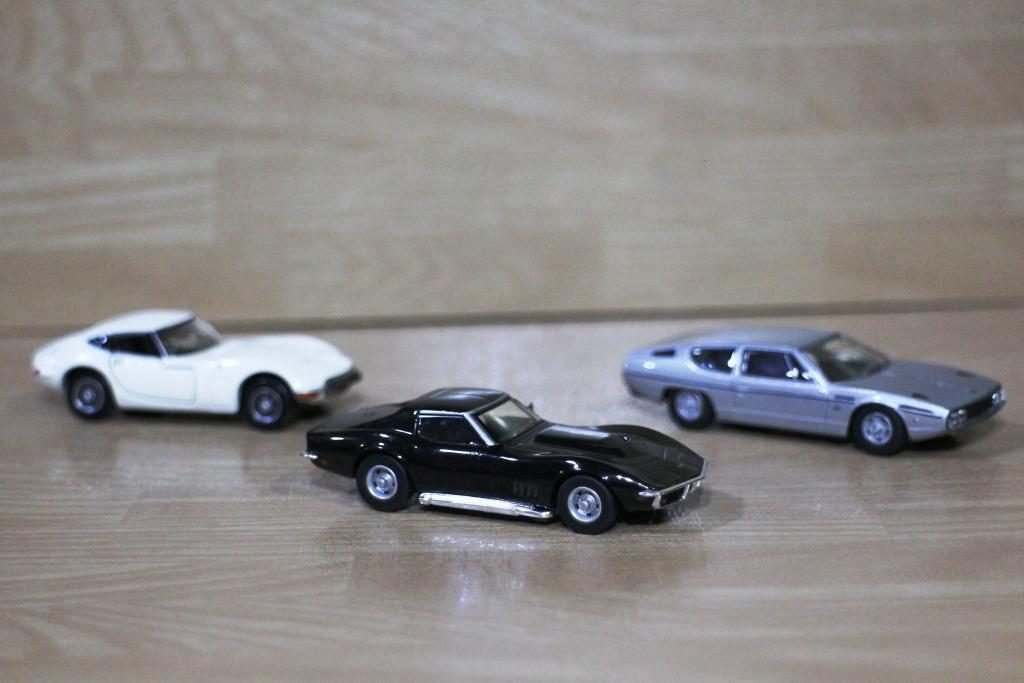 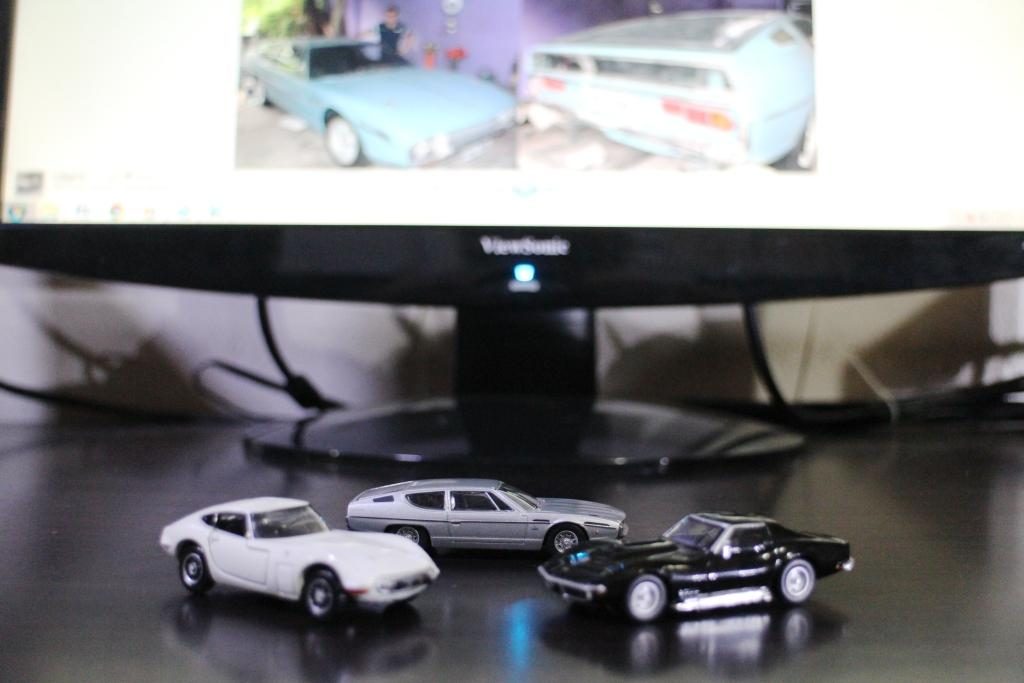