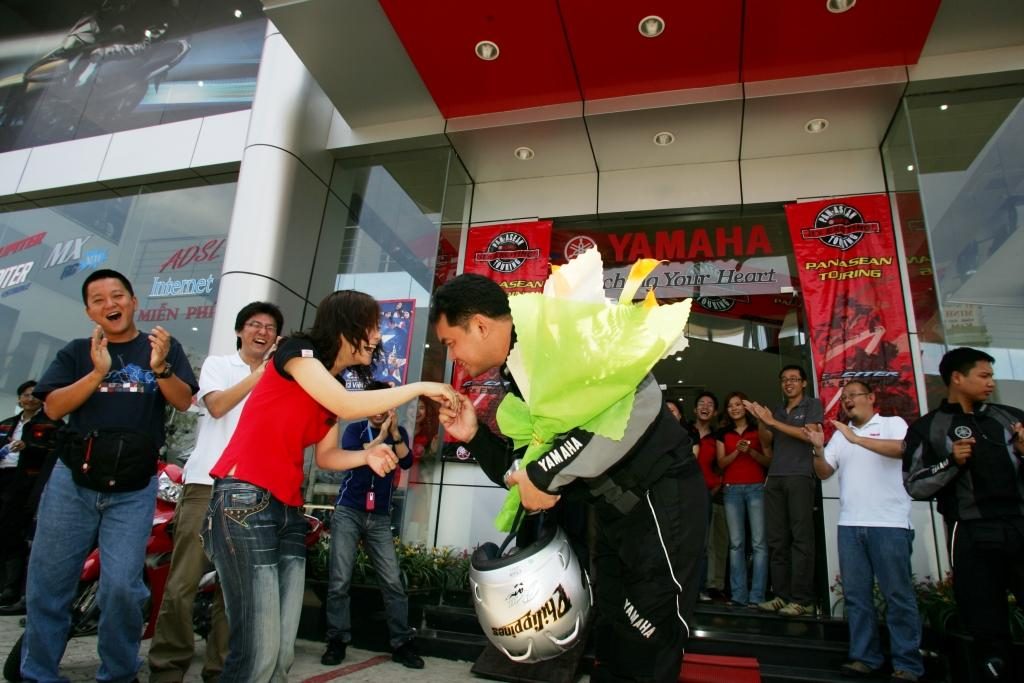 In 2006, I was in Vietnam for a 15-day motorcycle tour from Hanoi to Ho Chi Minh City. During one of our several forays into local flea markets, I stumbled upon a 1:10 scale ERTL 2002 Harley-Davidson Road King in its protective plastic packaging case. Through an interpreter, the Vietnamese vendor said that the model motorcycle was a used but loved collectible but it was missing its box. The price was in the local Dong currency, but when you convert it to Philippine Peso, it was just unbelievably low so I snapped it up without even thinking, or negotiating, for that matter. 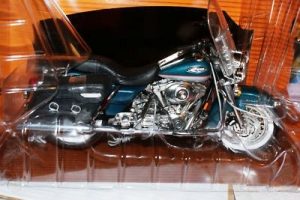 To any motorcycle enthusiast, Harley-Davidson is an iconic brand. If anything with a Harley-Davidson brand or image is for sale at a bargain – be it a belt buckle, a pin, coffee mug or scale model – chances are, it will be sold almost immediately. More so a large and weighty die-cast 1:10 scale model of the Road King being offered at a very low price. It’ll be sold and gone the minute I turned my back. That’s why I bought it quickly. It was a good thing that we have a back-up vehicle during our ride around Vietnam where I can keep my newly-purchased model bike in my luggage. Or else, I’ll be lugging it in my backpack all throughout the ride. 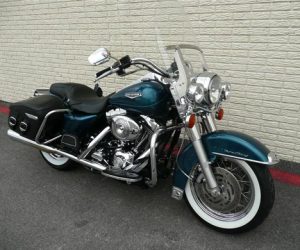 The Road King combines classic Harley-Davidson styling with touring comfort and features. At the heart of the 2002 Road King is the Twin Cam 88 engine, isolation-mounted in the touring frame for comfortable riding. The Road King features an easier-shifting transmission, a large, electronic speedometer mounted in a die-cast chrome dash on the tank, and a massive, nostalgic chrome headlamp and nacelle to accent the traditional Harley-Davidson styling heritage. 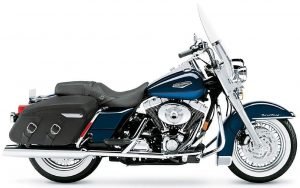 The Road King also features a detachable Lexan windshield, two-piece seat, saddlebags, triple disc brakes, and air-adjustable rear touring suspension. It rolls on 16-inch Dunlop tires made specifically for Harley-Davidson wrapped around lace-spoke wire wheels. The oval air cleaner has an aluminum insert that indicates whether the Road King is carbureted (FLHR) or fuel-injected (FLHRi), while the transmission is a 5-speed manual. 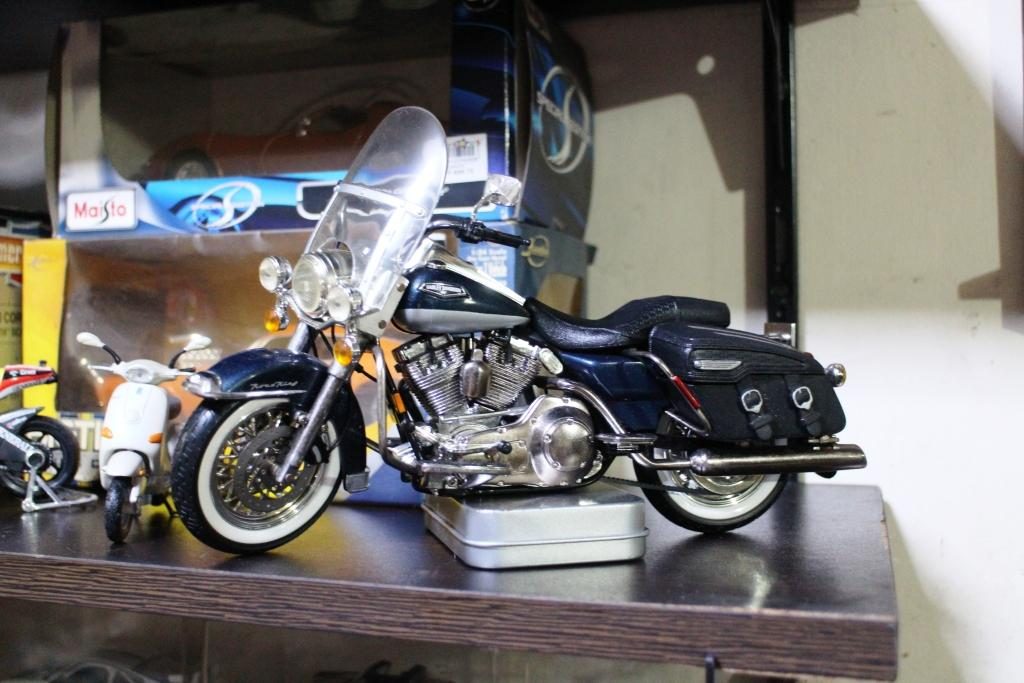 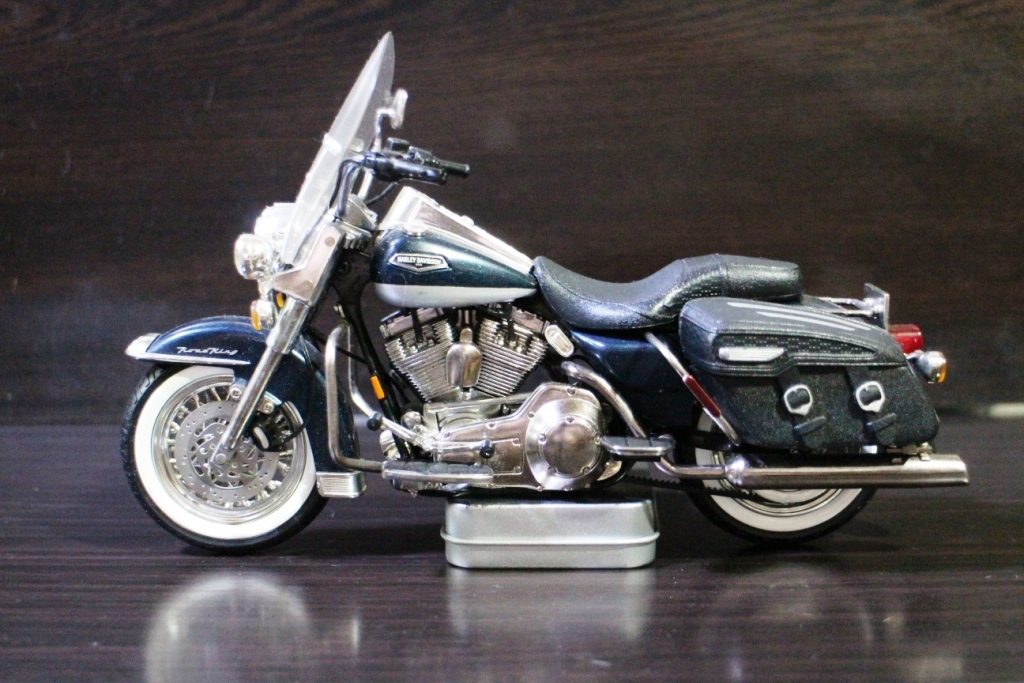 My Road King die-cast model is finished in two-tone Luxury Blue / Diamond Ice, which is nicely contrasted by the white-wall tires. Upon closer inspection I was surprised with the realistic minute details that ERTL lavished on this model. The V-twin motor and its finely spaced air-cooling fins are spot-on; the saddle bags look almost real; the cross-drilled front disc brakes and the cross-laced wire wheels and the white-wall tires represents the new-and-old portions of this model; and both left and right foot controls for the gear selector and the rear disc brake move with an almost realistic spring-back action. 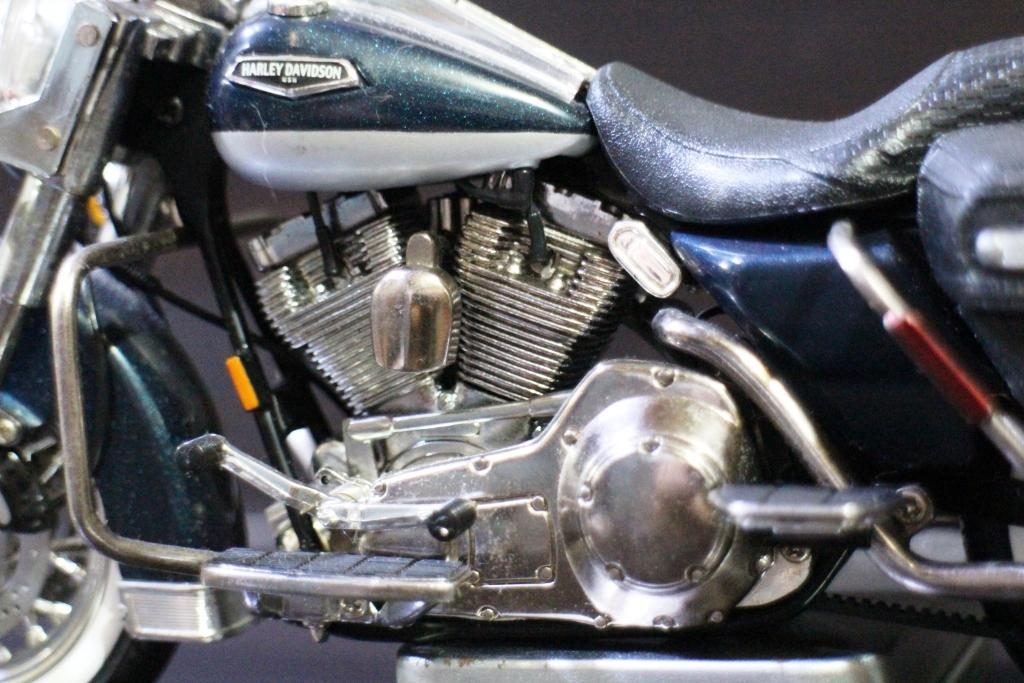 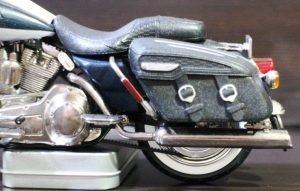 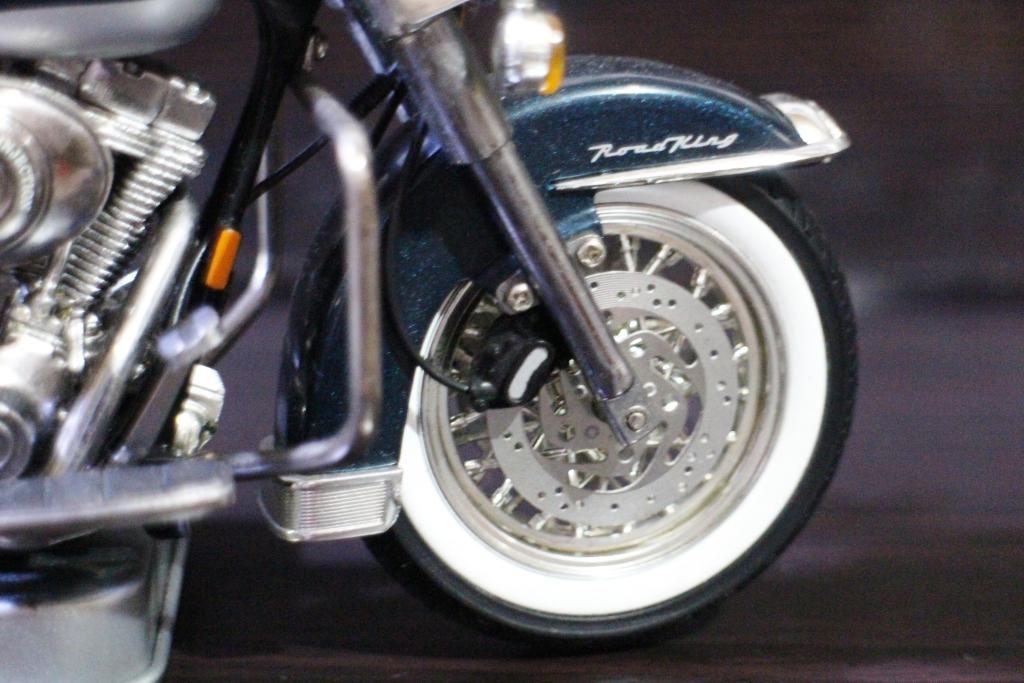 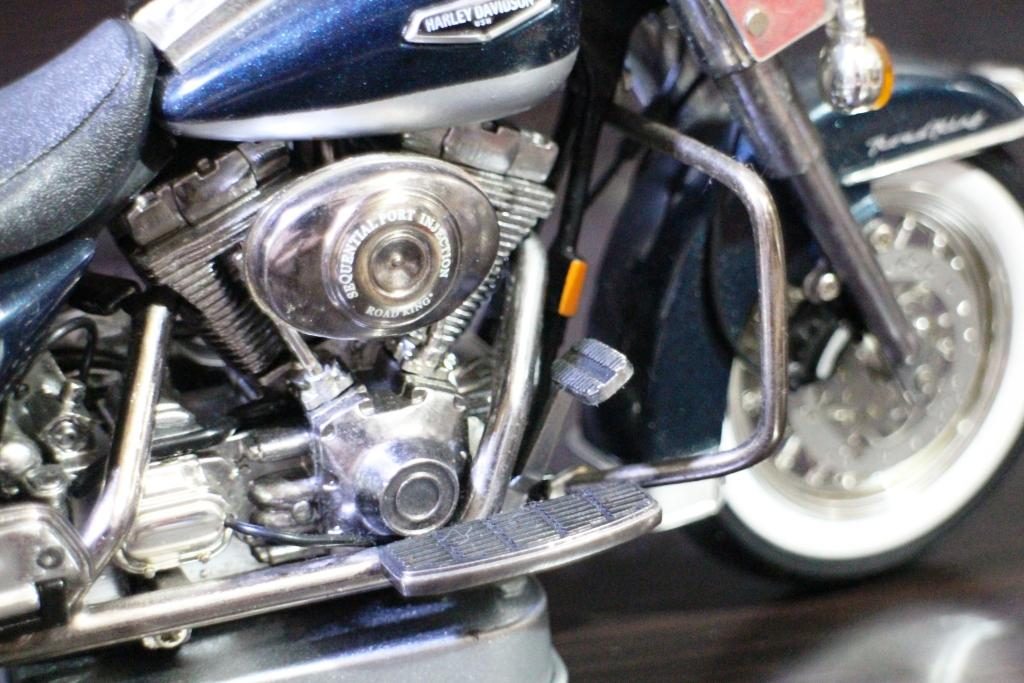 The words “Sequential Port Injection” and “Road King” are present on the air cleaner insert just like in the actual bike and the tank-mounted speedometer was almost legible. The rear  fender sports a tail light and signal indicator bar assembly fitted with a 2002 license plate printed with the words “Series One”. Another nice touch are the folding foot rests for the pillion passenger. This ERTL 1:10 scale model is truly a detailed work of art. 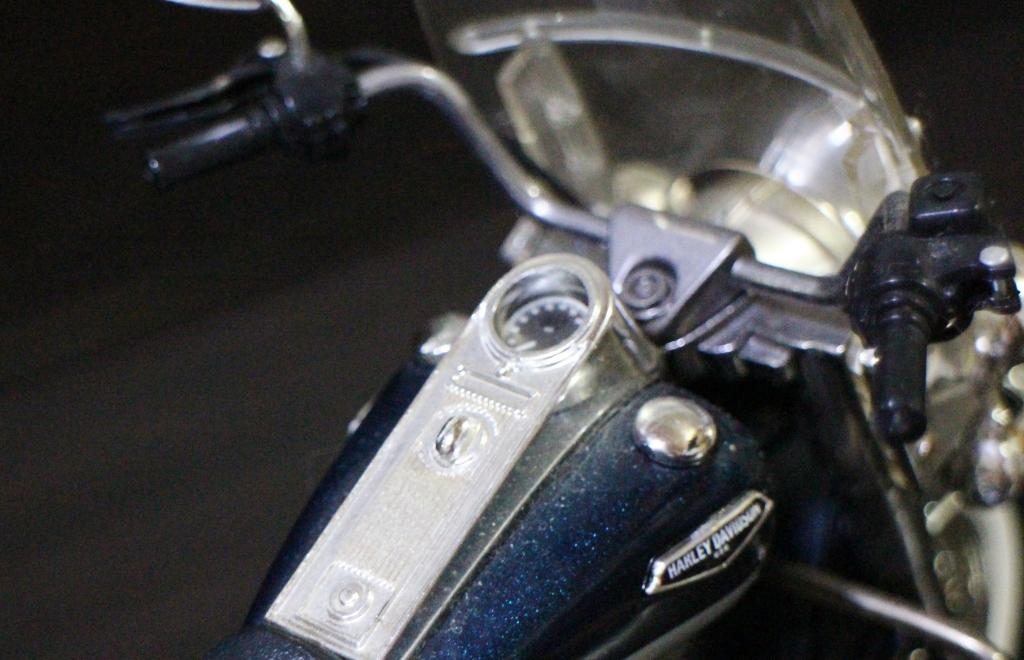 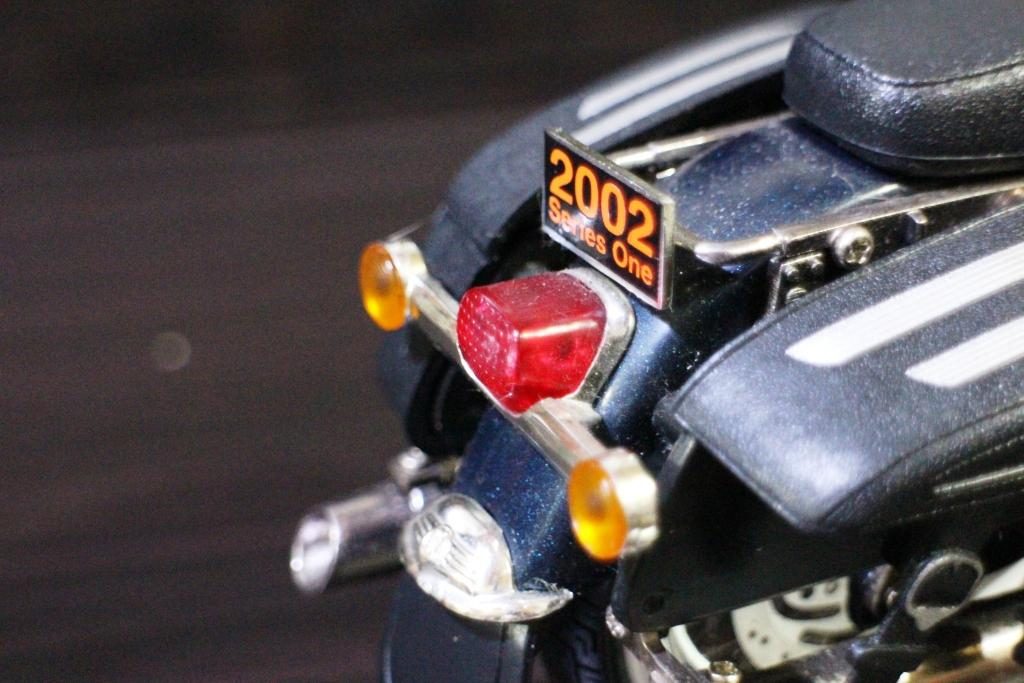 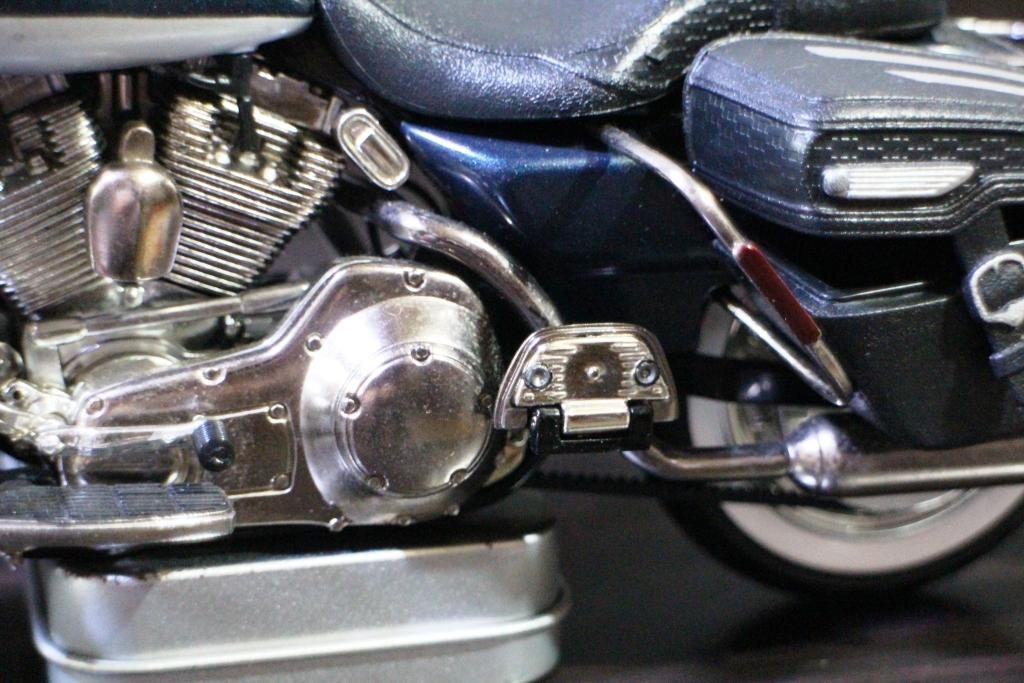 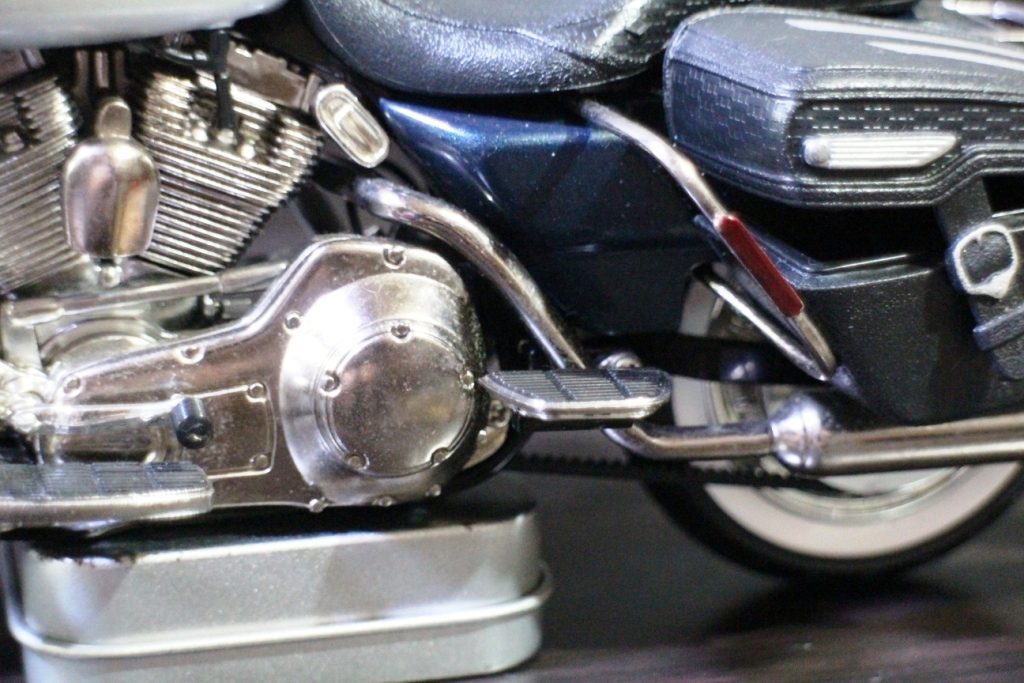 However, in 2008, my miniature Harley-Davidson was borrowed as props for a local movie, and when I got it back a couple of months later, it was missing the lower portion of the right saddle bag, the right (brake) lever, and the right rear view mirror. I didn’t notice these missing parts at first because the Road King was handed back to me inside its taped-up protective plastic packaging case. I did not open the case to inspect the model bike closely upon return because I trusted the person I lent it to. Serves me right for being too trusting. 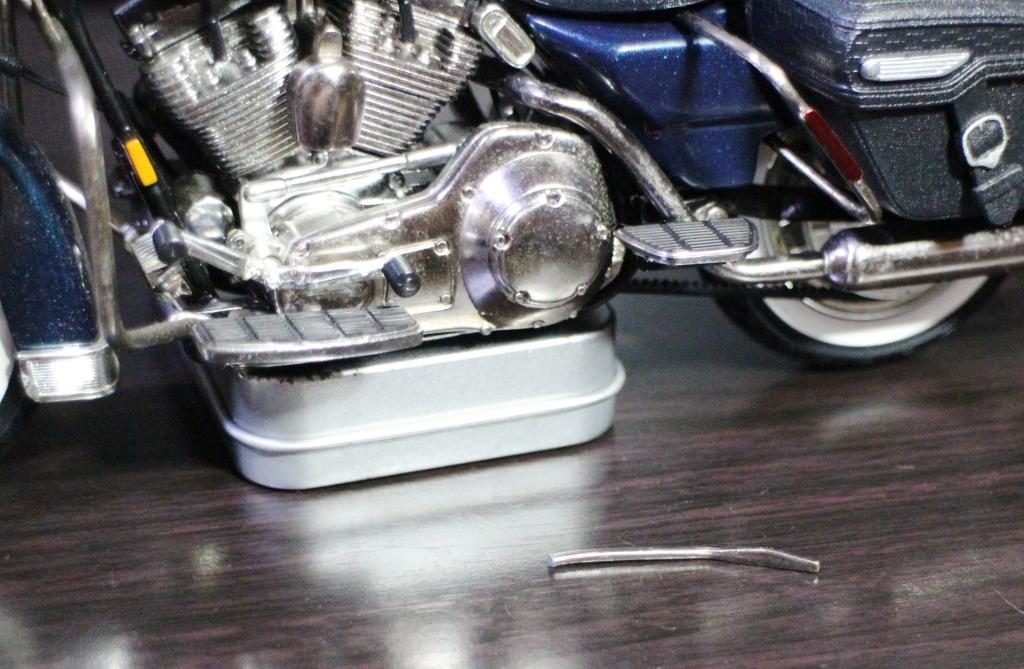 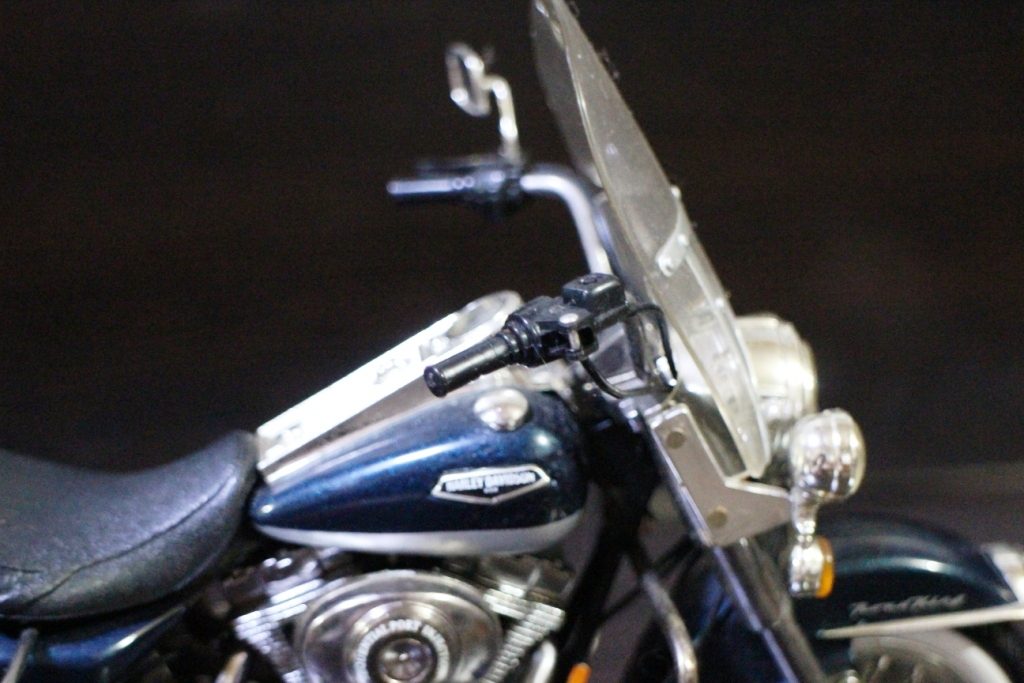 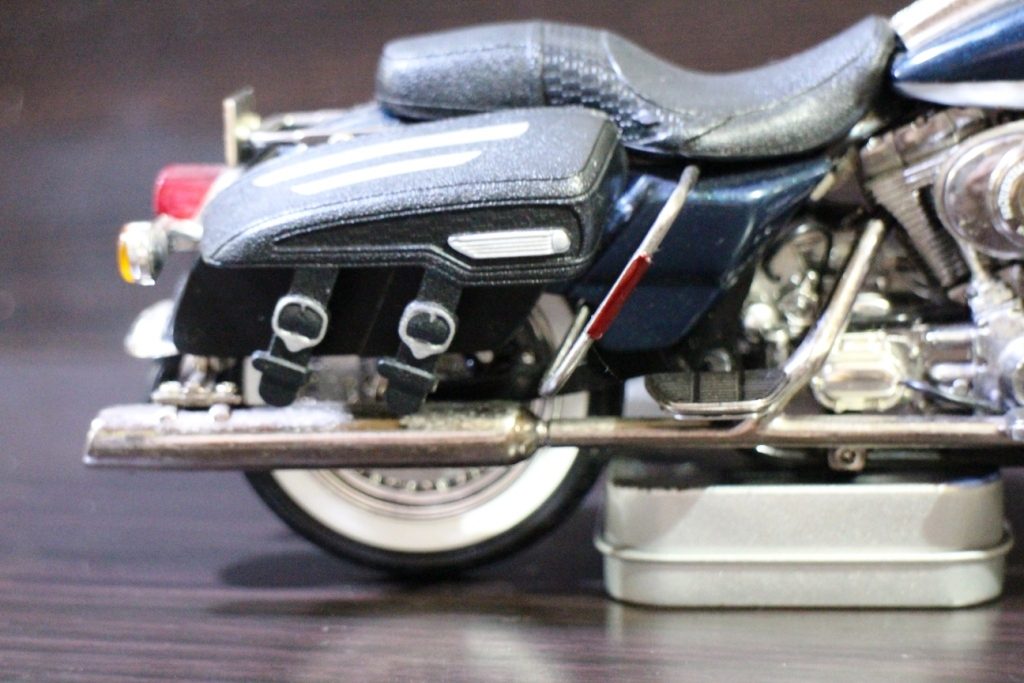 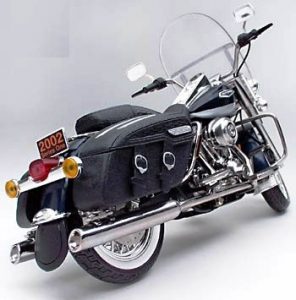 I only noticed the missing parts and broken side stand when I was about to display my miniature Harley on my desk a few months after I got it back. At first, I was furious but then I told myself that these model bikes can be fixed or replaced. I even jested that it could be my mini “project bike”. However, to display this ERTL model bike on my shelf at my current home-office, I have to use a small aluminum USB case as its temporary stand since its original side stand has sheared off. But I had a feeling that a good thing will eventually come out of this misfortune. 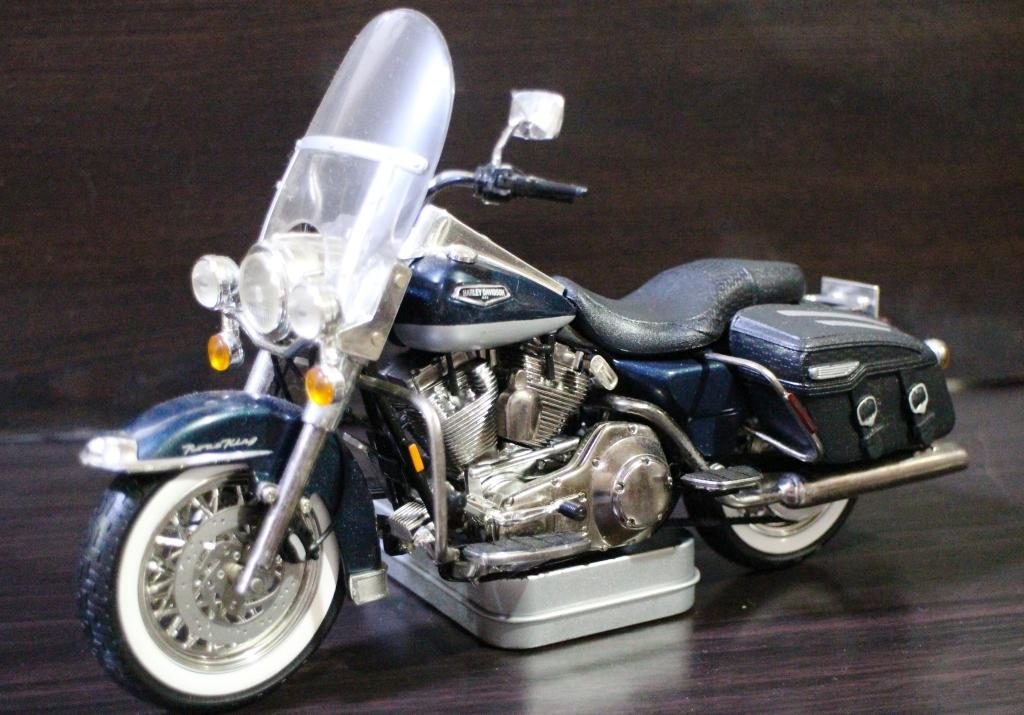 And a good thing eventually did: In 2013, I had the opportunity to meet William “Bill” Davidson, the great grandson of one of the founders of The Motorcycle Company and I told him that I’ve always wanted to tour iconic Route 66 on a Harley-Davidson. Bill offered to lend me a Road King or a similar touring cruiser when I’m in the U.S. to ride coast-to-coast “from Chicago to L.A., more than 3,000 miles all the way”. “Just pick it up at the east coast, pass by the Harley-Davidson Museum along the way, and drop it off at the west coast when you’re done with the ride. Or you can go the other way – west to east – if you like”, said Bill, who manages the H-D Museum in Milwaukee. Oh, man! I’m going to live the dream soon! I just got to save up for it, though… 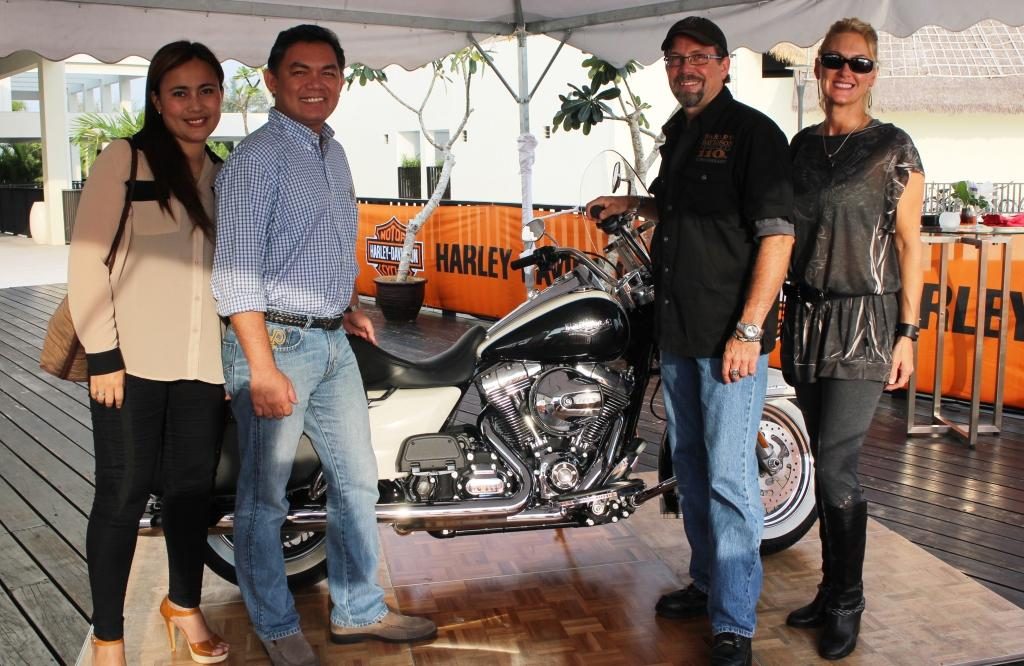 Seven years later, I still have to get my “kicks on Route 66” but this COVID-19 pandemic just moved my timetable back a few more years. Thus, despite the missing and broken parts, I’m happy that I have my ERTL 2002 Harley-Davidson Road King die-cast model bike. It is a reminder of my adventure ride in Vietnam and of a promise I made to myself to someday ride Route 66 on a Harley-Davidson. Oh, well… it ain’t over ’til it’s over! 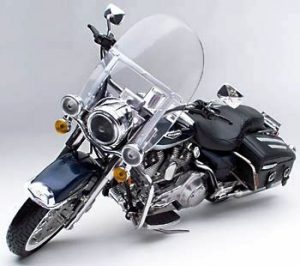 To see other scale model cars and motorcycles that we have previously posted here in the Power Wheels website, please click “The Rack” button on the header bar near the top right of your screen (if you’re using a PC, laptop or tablet), or type “The Rack” on the Search bar if you’re using a mobile phone. Tomorrow, we’ll review some concept cars from the early ’90s. In the mean time, stay safe by staying home during this pandemic. Help flatten the curve of the infection rate by doing your part. Together, we can beat COVID-19! 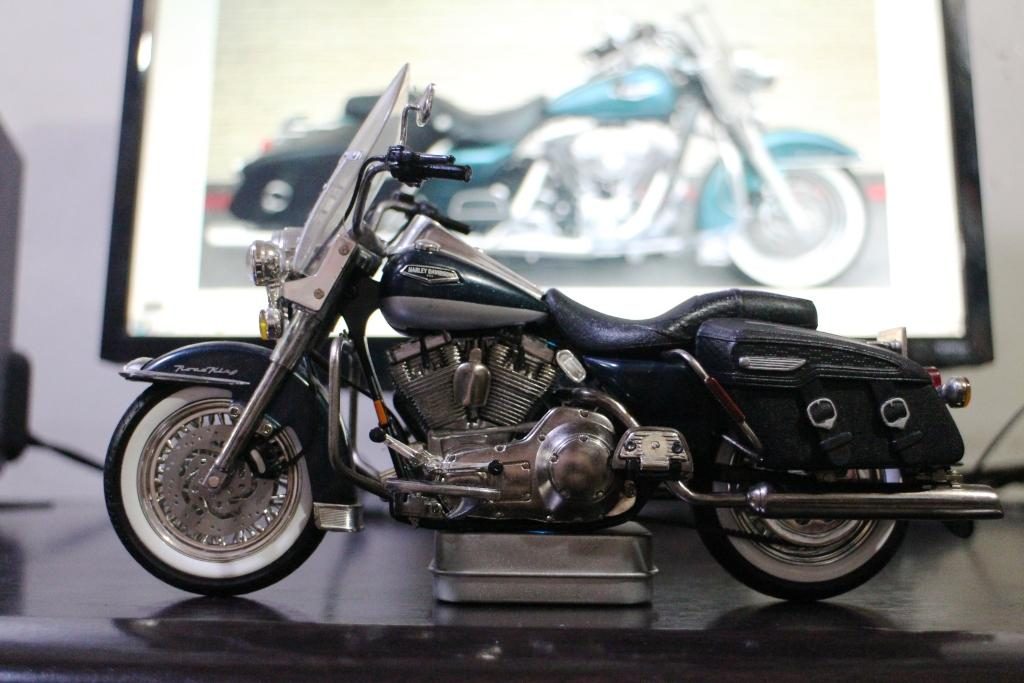