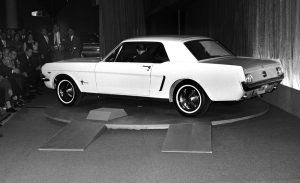 It started innocently enough. In April 1964, the Ford Motor Company (FoMoCo) introduced the new Mustang that took the Sixties youth market by storm. General Motors (GM) followed suit two years later and introduced the new Camaro in September 1966. Since the market was lorded over by the Mustang, the automotive genre of long-hood short-deck personal 2-door hardtop coupes and convertibles became known as the “Pony Car”. 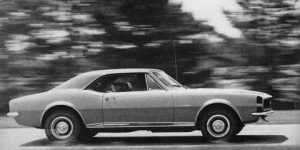 In 1969, the “pony car wars” between Ford and Chevrolet has reached its peak. The rivalry between the Mustang and the Camaro escalated from a mere beauty pageant to an all-out horsepower war. Both manufacturers only listed the “de-tuned” horsepower produced by their respective pony cars, which were usually underrated below 500 hp because of legal issues and rising insurance costs. Both the FoMoCo and GM have produced high-performance engines and horsepower ratings that were considered exotic fifty years ago but are considered commonplace today. 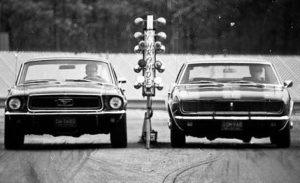 In 1968, Ford was developing a new engine that could compete against Chrysler’s powerful 426 Hemi in the National Stock Car or NASCAR racing series. The Ford Boss 429 cubic-inch engine used four-bolt mains, a forged steel crank, forged steel connecting rods, and aluminum cylinder heads with a modified semi hemispherical combustion chamber. The “dry-deck” aluminum heads did not use head gaskets and relied on individual “O” rings to seal each cylinder, oil passage and water passage tight. 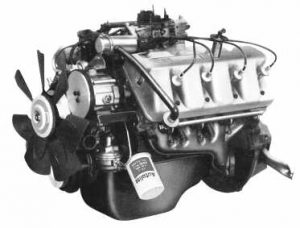 A single 735 cubic feet per minute (CFM) Holley 4-barrel carburetor, mounted on an aluminum intake manifold, worked with a hydraulic lifter camshaft and dual exhaust system to produce 375 horsepower at 5,200 rpm and 610 Newton-meter of torque at 3,400 rpm. Some owners claimed to coax 600 hp or more out of the semi-hemi engine since it was de-tuned at the factory for insurance and street-ability purposes. 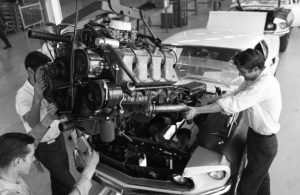 Kar Kraft technicians get ready to fit the Boss 429.

NASCAR’s homologation rules required that at least 500 cars must be fitted with this new motor and sold to the general public. Ford decided to fit the 429 in the 1969 Mustang fastback but its engine compartment was not wide enough to accommodate the massive engine. Ford assigned Kar Kraft, their exclusive contracted experimental vehicle facility, to develop new revised front apron assemblies for the Mustang, which were installed at the Ford Rouge plant as the base vehicles were being built along with the reworked front fenders. The cars were transported from the Rogue plant to Kar Kraft’s assembly plant in Brighton, Michigan for final assembly. 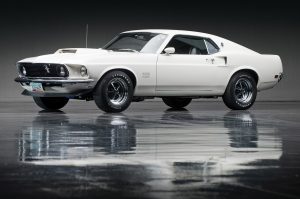 To make the front-heavy car handle better, the battery was transferred to the trunk and a ¾-inch sway bar was added, making the Boss 429 the first Mustang ever fitted with a rear sway bar. It also came with an 8,000-rpm tachometer, a manually-controlled hood scoop, a shallower front spoiler, color keyed dual racing mirrors, an engine oil cooler, and a 3.91 ratio rear axle with a “Traction-Lock” limited slip differential. An AM radio was the only option available for the Boss 429. Each 1969 Mustang Boss 429 was given a NASCAR identification that was riveted on the driver’s side door and a “KK” number which stood for Kar Kraft. KK #1201 was the first Boss 429 and KK #2558 was the last Boss 429 made. There were 857 Ford Mustang Boss 429s made in 1969. 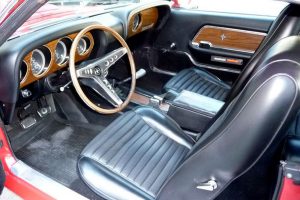 Interior of the Mustang Boss 429 wasn’t different from other 1969 Mustangs. 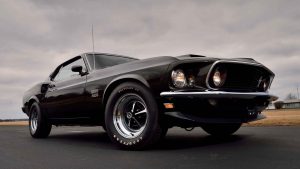 The 1969 Chevrolet Camaro was equipped with the previous model’s major mechanical components but featured all-new sheet metal, except the hood and trunk lid, to give it a sportier look. The grille was redesigned with a heavy “V” cant and deeply inset headlights. New door skins, rear quarter panels, and rear valance panel also gave the car a much lower, wider, more aggressive look. This styling would serve for the 1969 model year only. 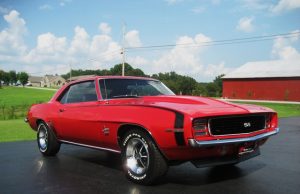 A corporate edict from General Motors forbade Chevrolet from installing V8 engines larger than 400 cubic-inches (6.6-liters) in their performance cars. Some dealers, like Don Yenko of Yenko Chevrolet in Cannonsburg, were installing 427 (7.0-liter) V8 engines in Camaros since 1967. To offer 427 V8s in their new cars, Chevrolet saw a way around the GM corporate edict and used the Central Office Production Order (COPO), which was an ordering process used for fleet and special orders, like police cars, taxis, trucks, etc. Two COPO V8 engine options, numbers 9560 and 9561, were offered in the 1969 model year. 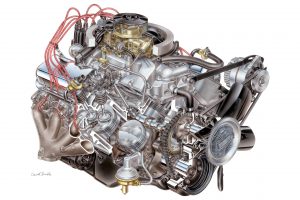 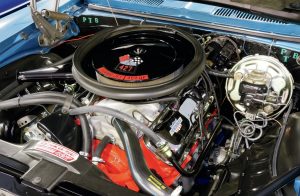 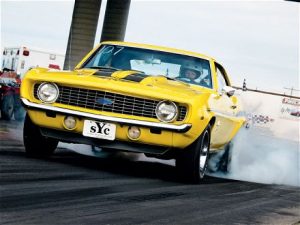 On the other hand, COPO 9560 fitted an all-aluminum ZL1 big-block 427 Chevy V8 that made 430 hp at 5,200 rpm and 610 Nm of torque at 4,400 rpm. With exhaust changes and some tuning, the ZL1’s power jumped to over 500 hp. Each ZL1 engine was hand-assembled for 16 hours inside a “surgically-clean” room at the Tonawanda Assembly Plant before being installed in Corvettes and Camaros, or sold over the counter to racers. The aluminum engine alone cost more than US$4,000 in 1969, which was more than the cost of a base Camaro V8 hardtop coupe. The Camaro ZL-1 package was designed specifically for drag racing, conceived by drag racer Dick Harrell, and ordered through Fred Gibb Chevrolet, with the intention of entering NHRA Super Stock professional drag races. A total of “only” 69 ZL-1 Camaros were produced. 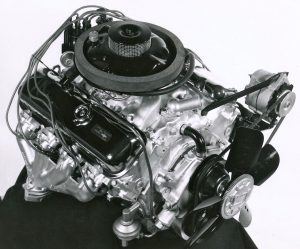 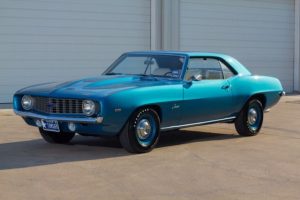 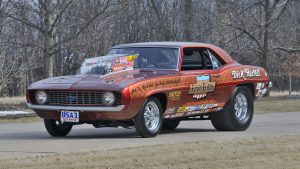 The War Still Rages On

Fifty years later, the horsepower war is still on with both Ford and Chevy using all-aluminum engines in their arsenal. Ford has its Mustang Shelby GT350 powered by a 315 cubic-inch (5.2-liter) V8 engine with a flat plane crank, PFI electronic fuel injection system, PCM engine management system, dual exhaust with electronic valves and quad tips, that churns out 526 hp at 7,500 rpm and 572 Nm of torque at 4,750 rpm. A Tremec 6-speed is the only transmission choice available with the high-performance GT350. 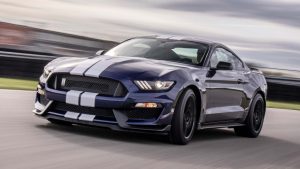 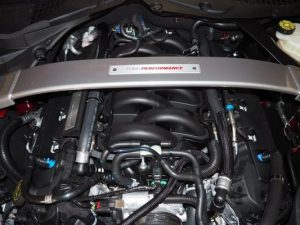 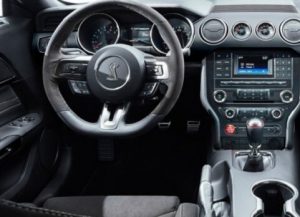 Chevrolet has its Camaro ZL1 with a 383 cubic-inch (6.2-liter) LT4 supercharged overhead-valve V8 engine equipped with a variable valve timing (VVT), and high-pressure direct fuel injection system that produces 650 hp at 6,400 rpm and 868 Nm of torque at 3,600 rpm. A Tremec 6-speed manual transmission with Active Rev Match is standard while a Hydra-Matic 10-speed automatic is available as an option. 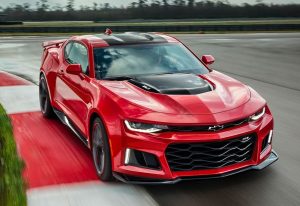 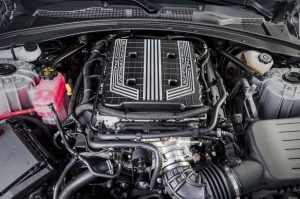 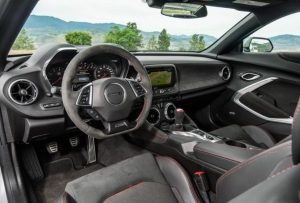 If it seems that Chevrolet has the upper hand this time with their 650-hp Camaro ZL1, Ford has an ace up its sleeve. They are set to introduce their 2020 Mustang Shelby GT500 with a supercharged 5.2-liter V8 that will reportedly make more than 700 horsepower and will be mated to a 7-speed dual clutch automatic developed by Tremec in cooperation with Ford. And we all know that Chevy won’t take all these sitting down. It’ll be exciting to see what GM will come up with to one-up their rival in this 50-year-old horsepower war! 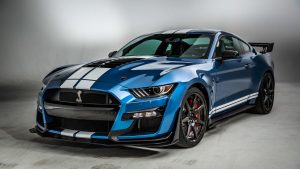 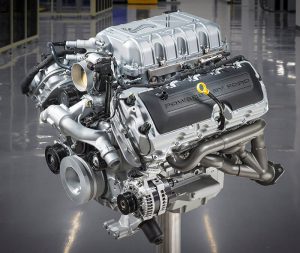