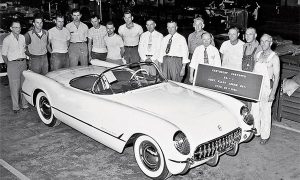 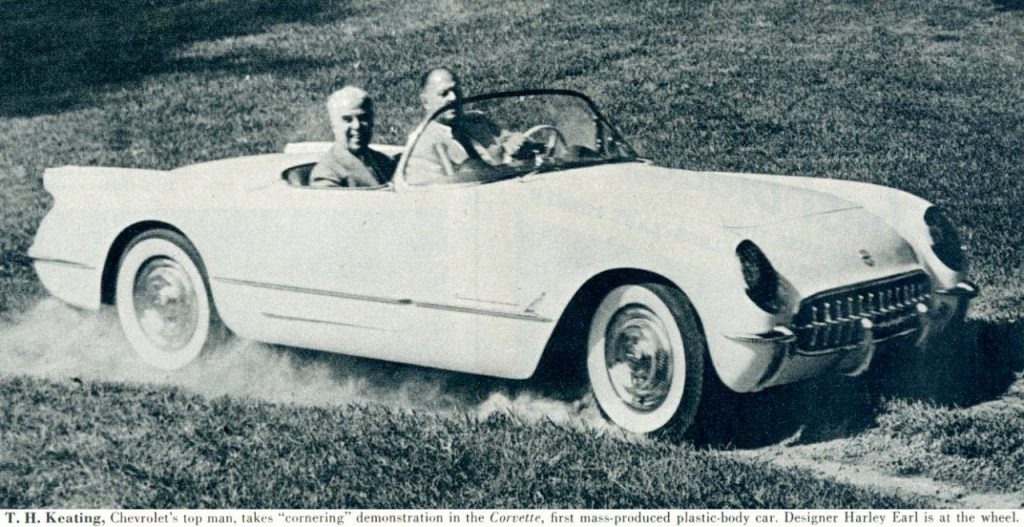 The finished car was the hand-built EX-122 pre-production Corvette prototype, which was first shown to the public at the 1953 GM Motorama at the Waldorf-Astoria Hotel in New York City on January 17, 1953. When production of the car began six months later, the manufacturer’s suggested retail price (MSRP) went up to $3,513, up from the $2,000 that Harley Earl originally had in mind for his low-slung American roadster. 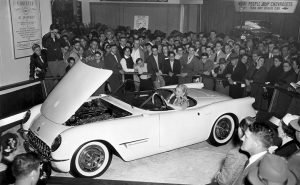 To keep the costs of the production cars down, GM executive Robert F. McLean mandated off-the-shelf mechanical components, and used the chassis and suspension design from the 1949–1954 Chevrolet passenger vehicles. The drivetrain and passenger compartment were moved rearward to achieve a 53/47 front-to-rear weight distribution within its 102-inch (2,591 mm) wheelbase. 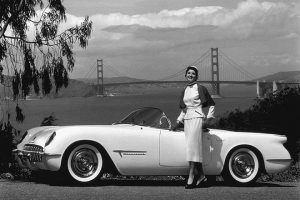 The Corvette’s engine was a 235 cubic-inch (3.85-liter) inline 6-cylinder that was similar to the engines that powered all other Chevrolet car models, but with a higher-compression ratio, three Carter side-draft carburetors, mechanical lifters, and a higher-lift camshaft. The “Blue Flame”, as the engine was marketed, churned out 150 horsepower and was mated to a Powerglide 2-speed automatic transmission that enabled the Corvette to go from zero to 60 mph (97 km/h) in 11.5 seconds. 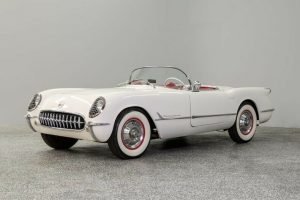 From July to December 1953, Corvettes were hand-built in Flint, Michigan while GM was building the St. Louis factory for full-scale production in 1954. The outer body of the car was made out of then-revolutionary fiberglass reinforced plastic engineered by Ellis James Premo. In a later interview, he revealed that the body of the EX-122 Motorama show model was made of fiberglass reinforced plastic just to get the job done quickly. He stated that GM was actually tooling up to make steel-bodied Corvettes for 1954. 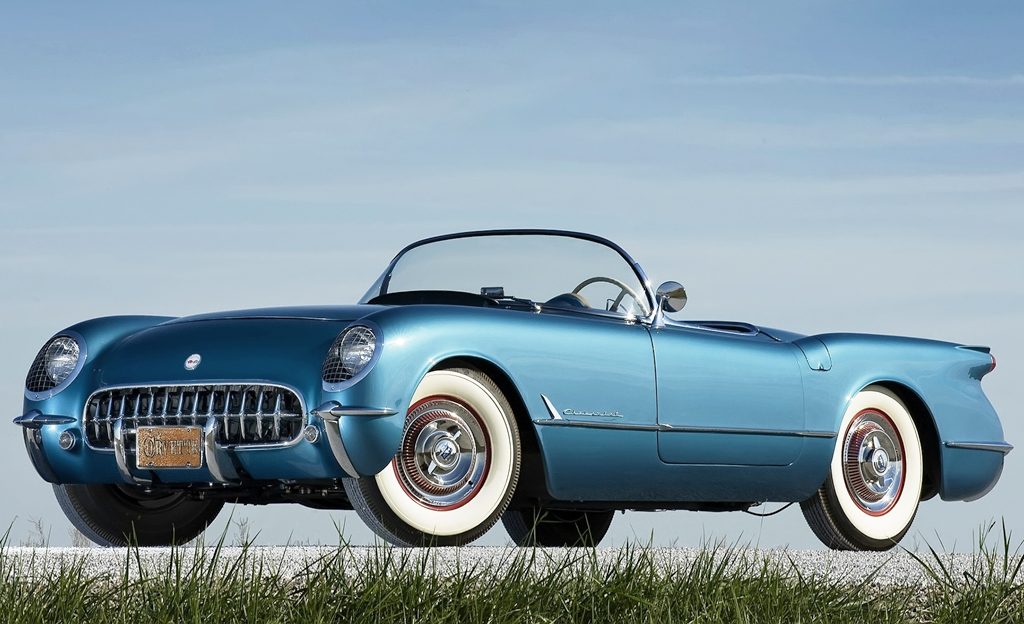 However, GM realized that people seemed to be captivated by the fiberglass plastic body and that there was the practicality of fabricating plastic body parts on a large scale. GM stuck with fiberglass reinforced plastic bodies for their sports car and the Corvette eventually earned the name “Plastic Fantastic”. However, with 300 units produced in 1953, 3,640 units made in 1954, and a third of these units languishing unsold in dealers’ parking lots, GM was seriously considering shelving the Corvette, if not for the challenged posed by rival Ford with their 1955 Thunderbird. 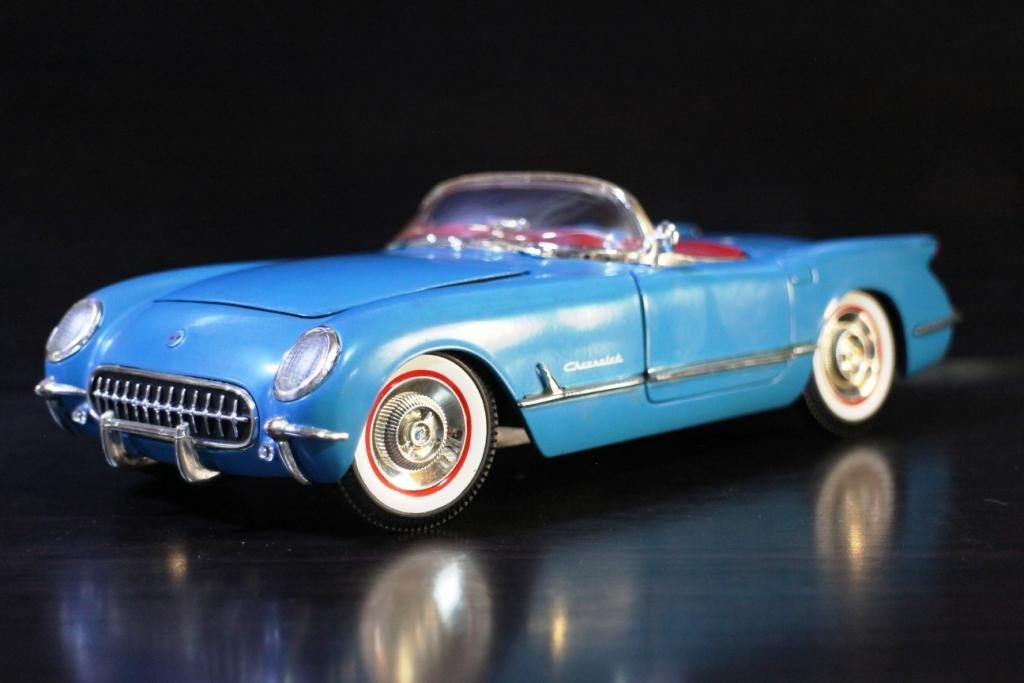 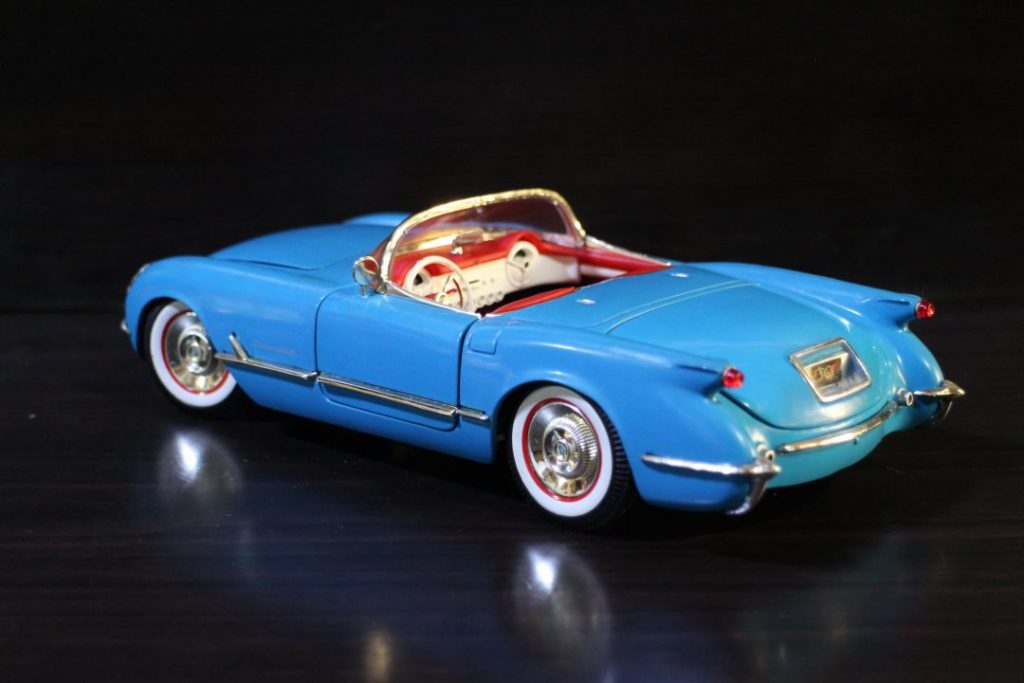 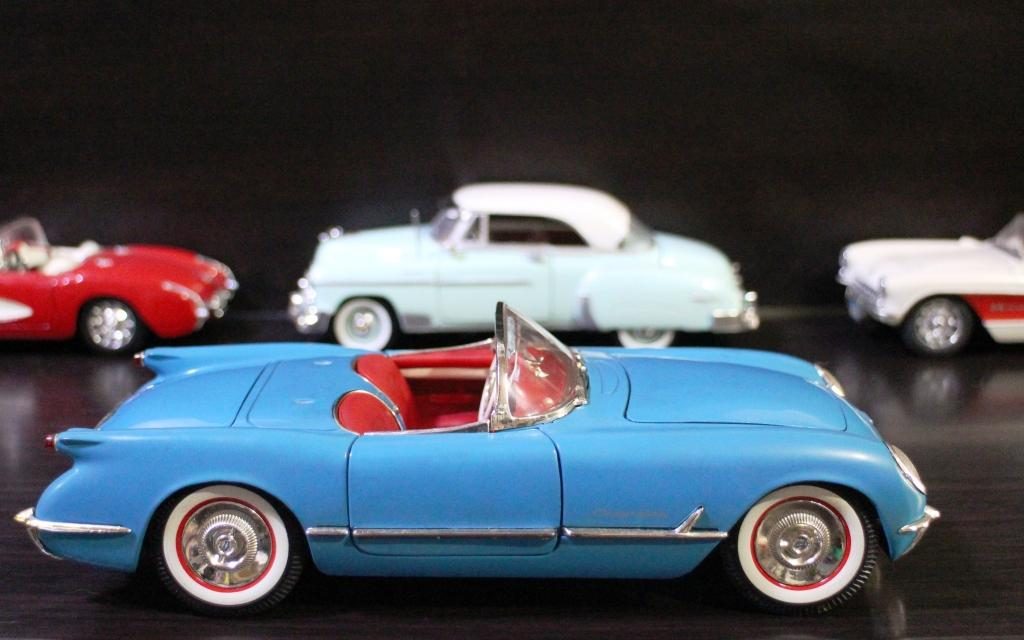 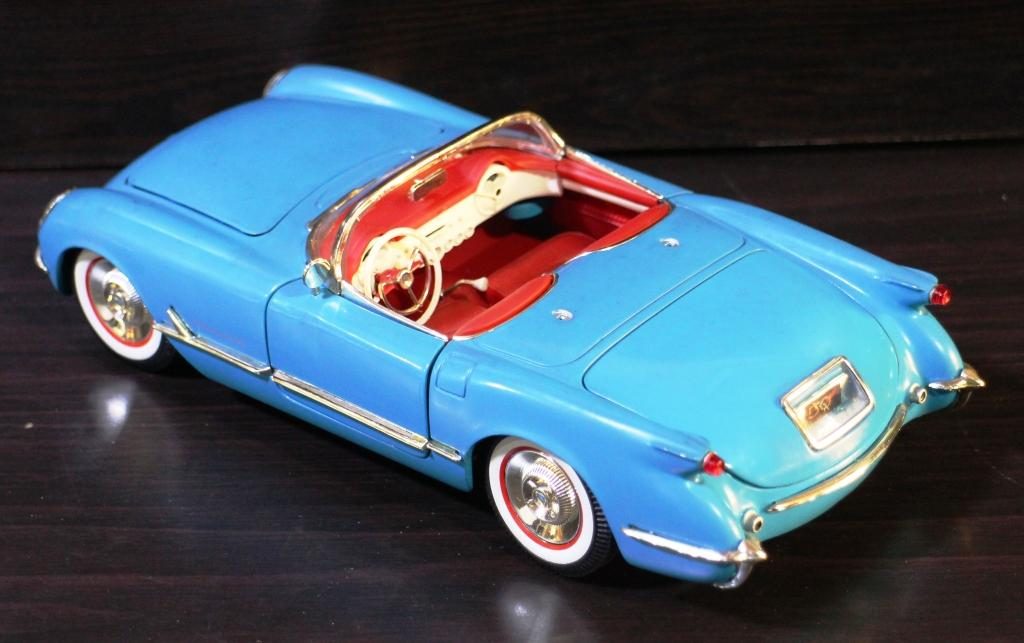 Our 1:18 scale die-cast model first-generation Corvette was made by ERTL in 2003 to celebrate the Corvette’s 50th Anniversary. It is NOT a 1953 model because first-year Corvettes were all painted Polo White and had red interiors with black canvas soft tops. We’re sure it’s a 1954 model because Pennant Blue, our Corvette’s color became available only that year, along with red, black, and white. 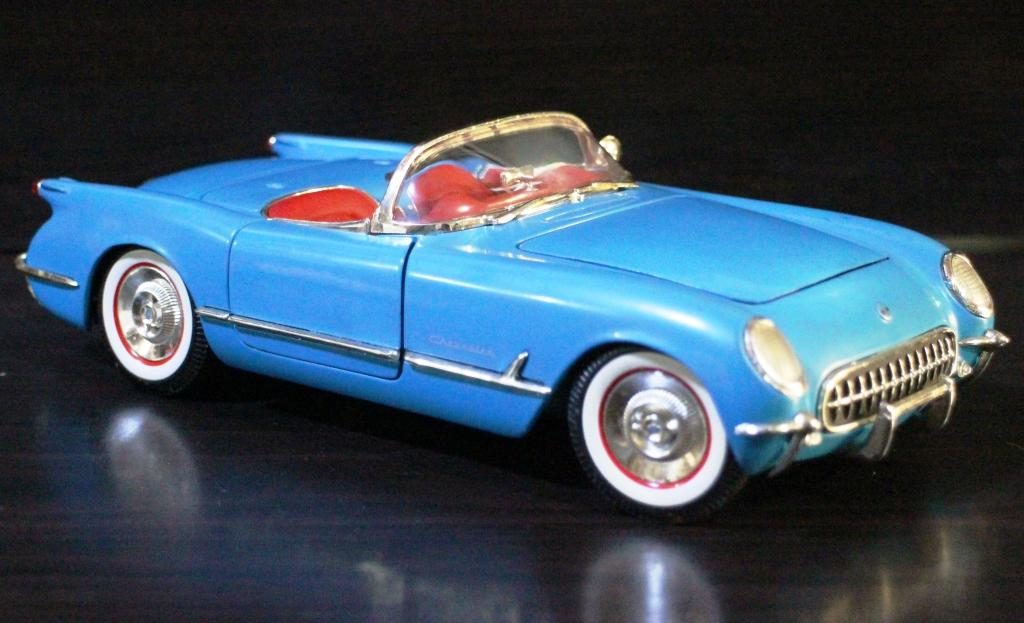 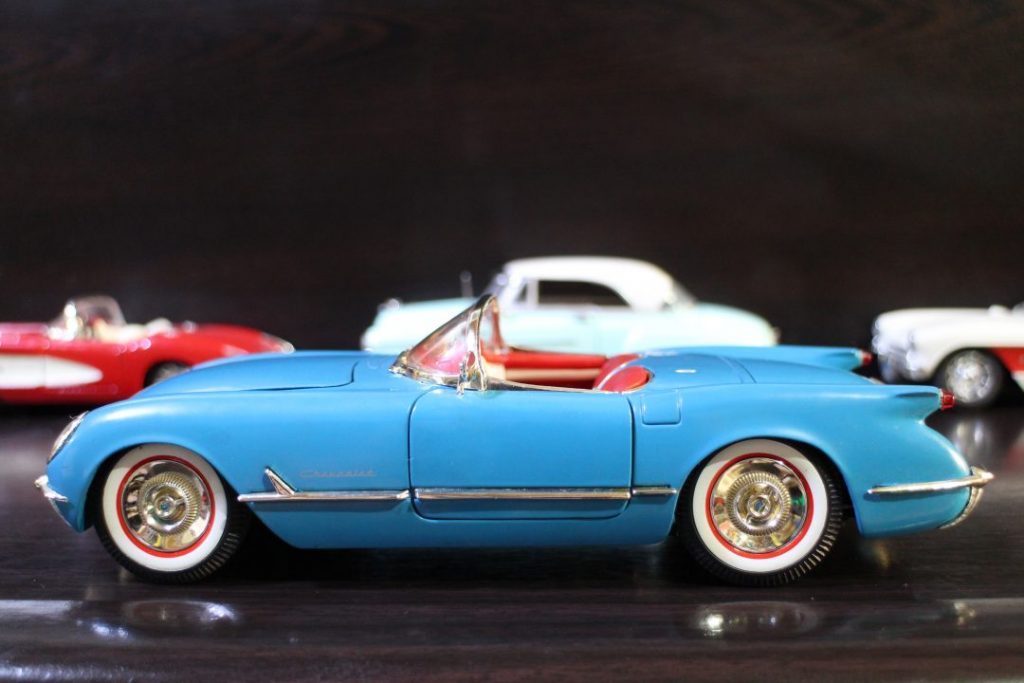 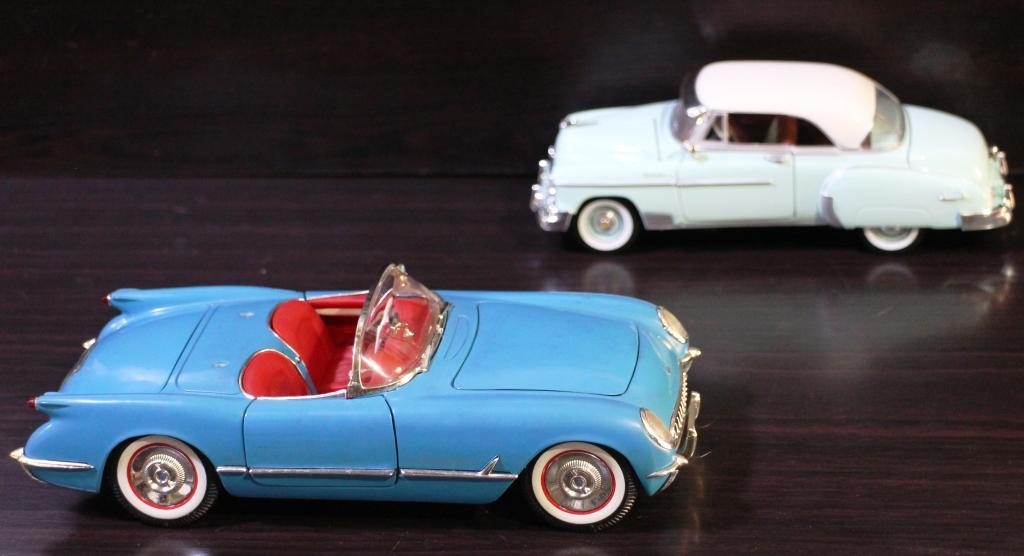 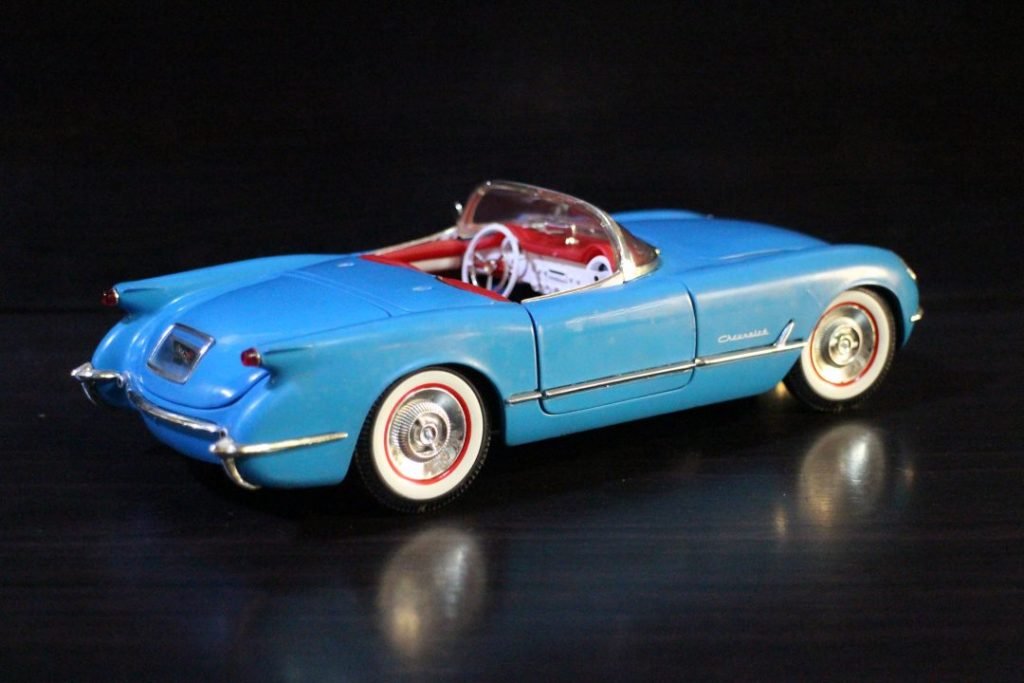 Interestingly, Corvette historians said that all 1954 models had red interiors, except for the Pennant Blue cars, which had a beige interior and beige canvas soft top. However, as you can see, our ERTL model car has a red interior, which makes it somewhat incorrect, or uniquely rare, depending on how you look at it. 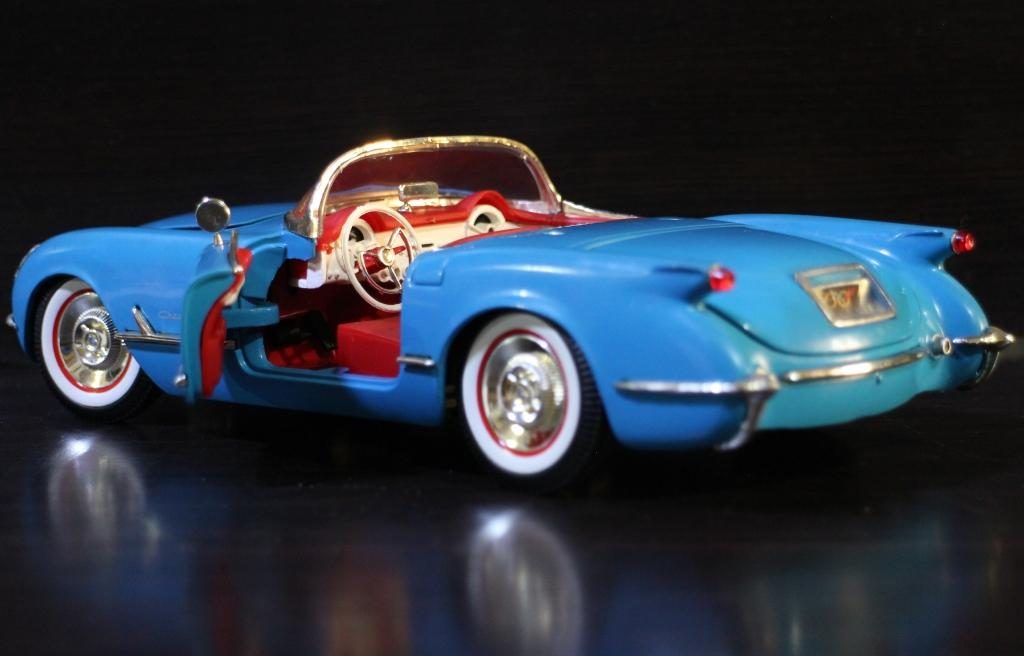 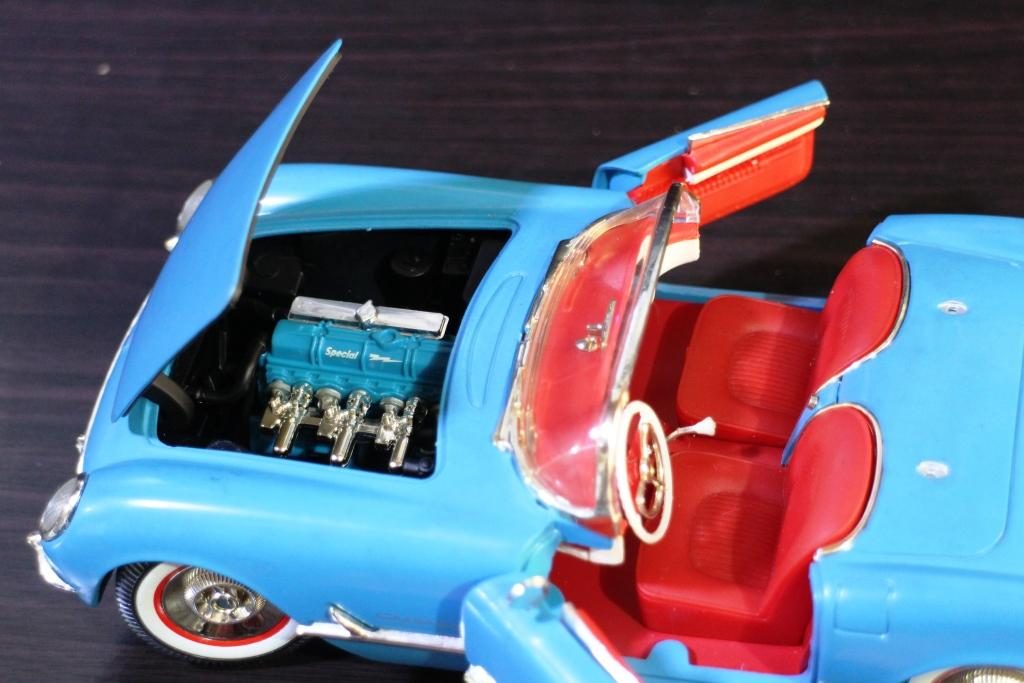 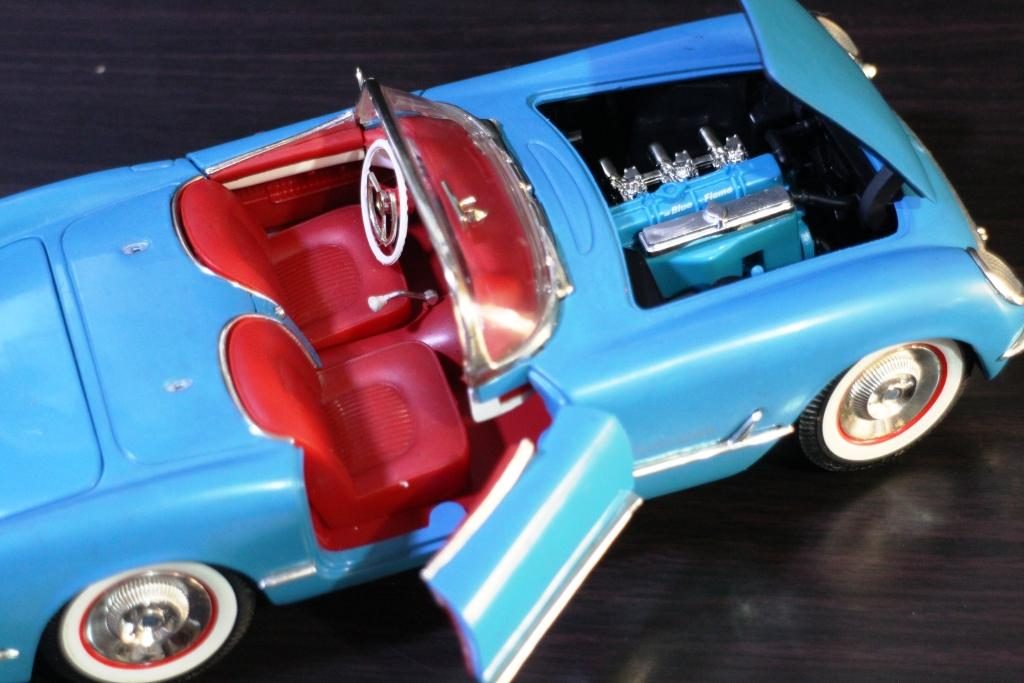 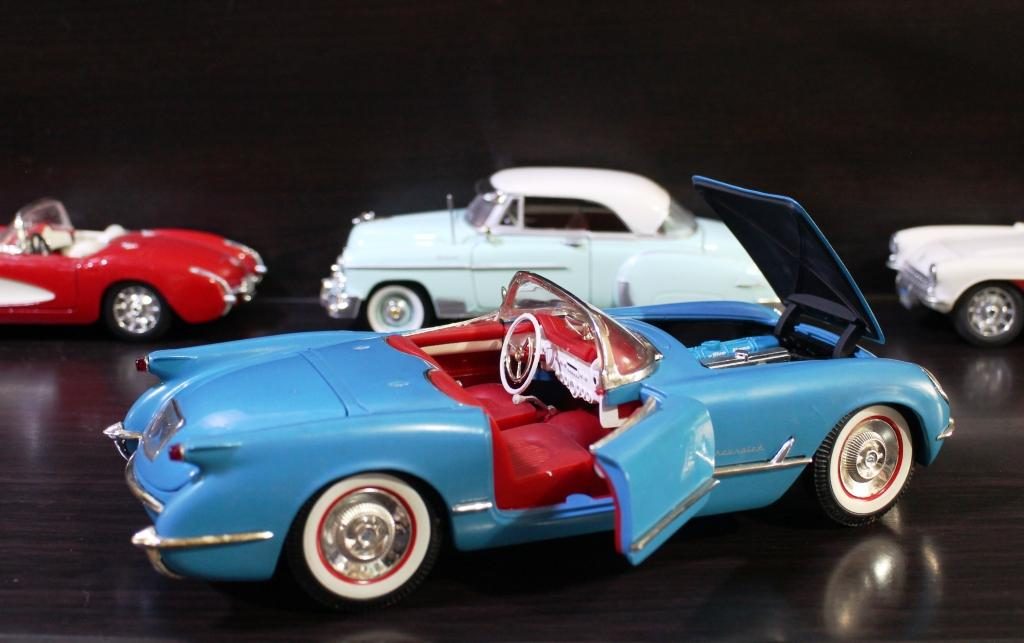 Our model car has opening doors, steerable front wheels, and an almost accurate representation of the dashboard and steering wheel. The hood opens to reveal the Blue Flame Six and its triple side-draft carburetors. The wheels are red steel rims with chrome hub caps and shod in white-sidewall bias-ply tires. 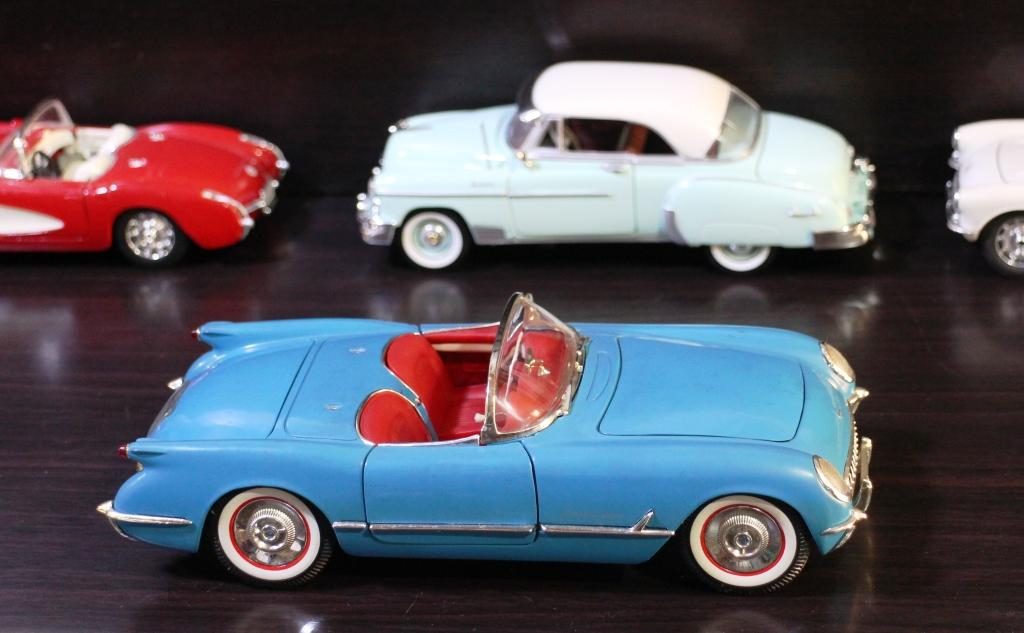 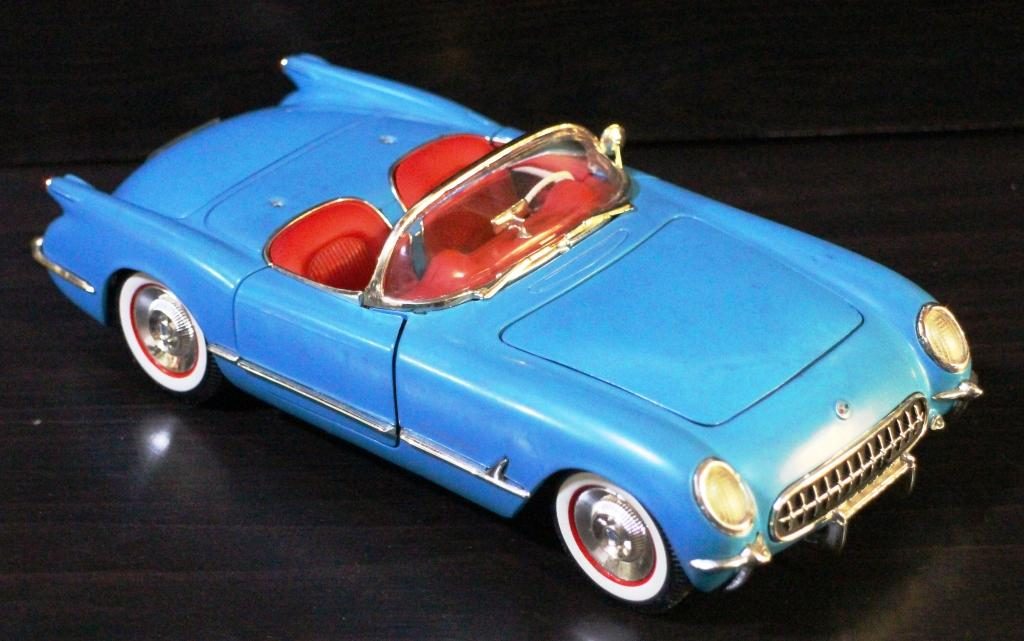 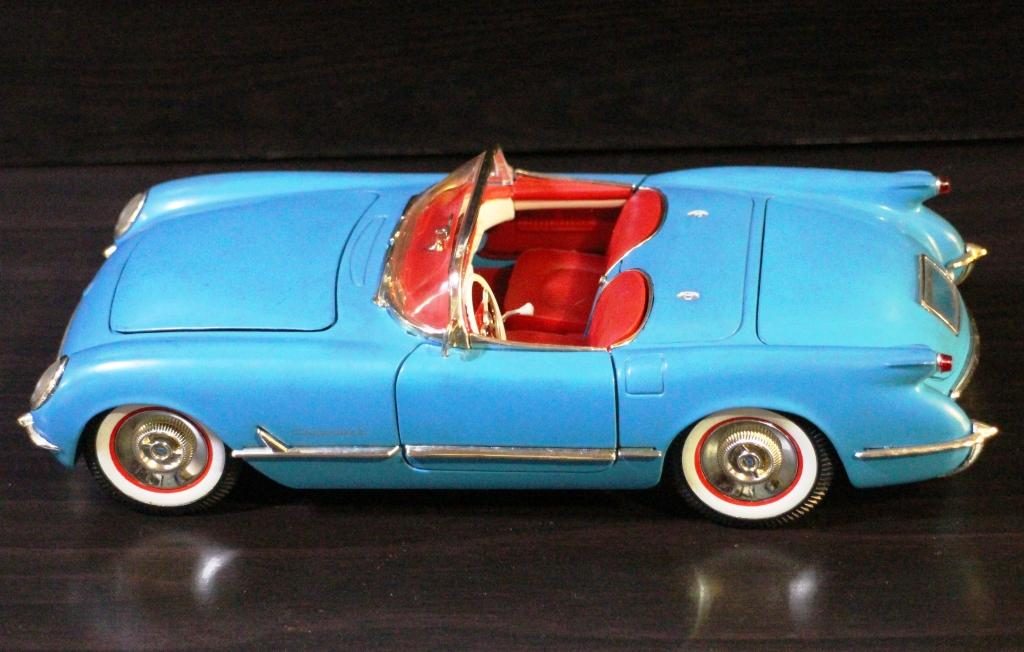 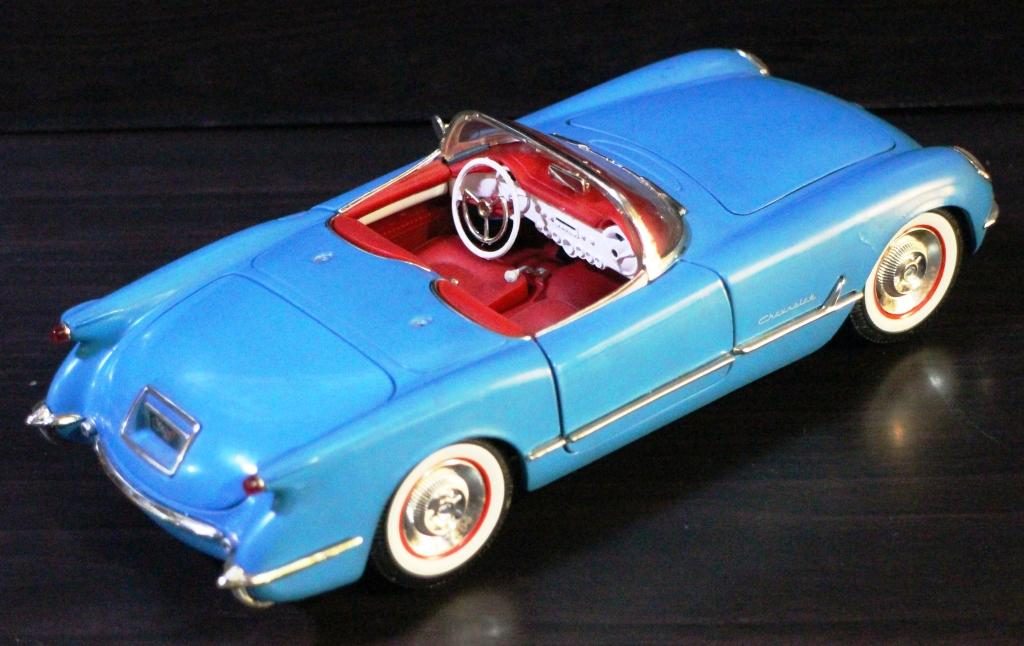 The production of the first-generation Corvette (C1), which is commonly referred to as the “solid-axle” generation, ended in 1962 after receiving several upgrades in 1955 (265 cid V8 engine), 1956 (revised styling), 1958 (quad headlamps and different front end), and 1961 (different rear end treatment). Meanwhile, the EX-122 Motorama show car is believed to be the oldest Corvette in existence and is displayed at the Kerbeck Corvette museum in Atlantic City. 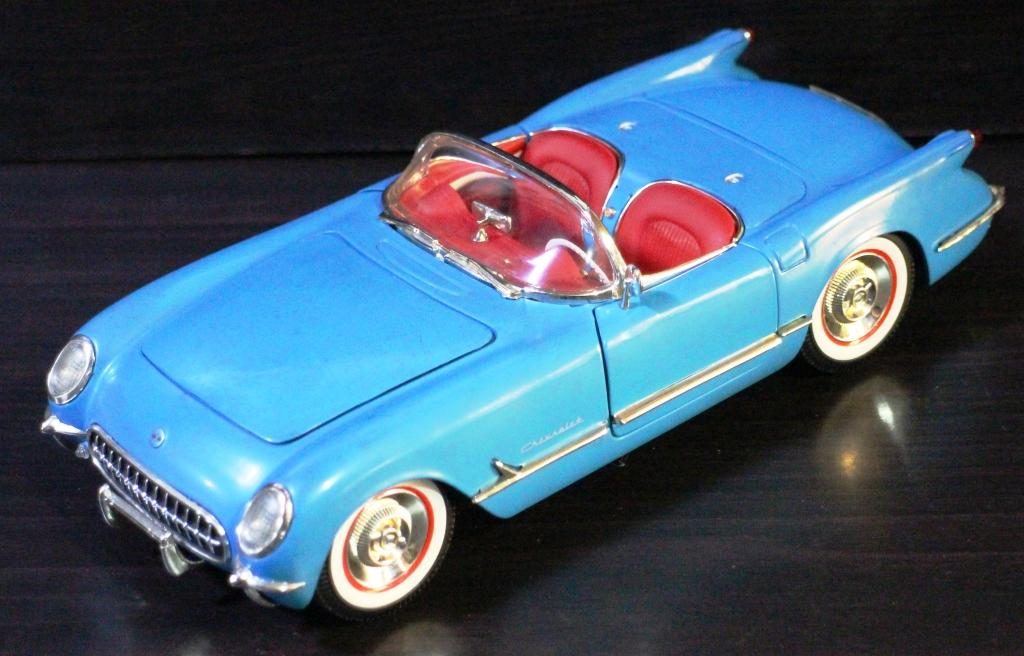 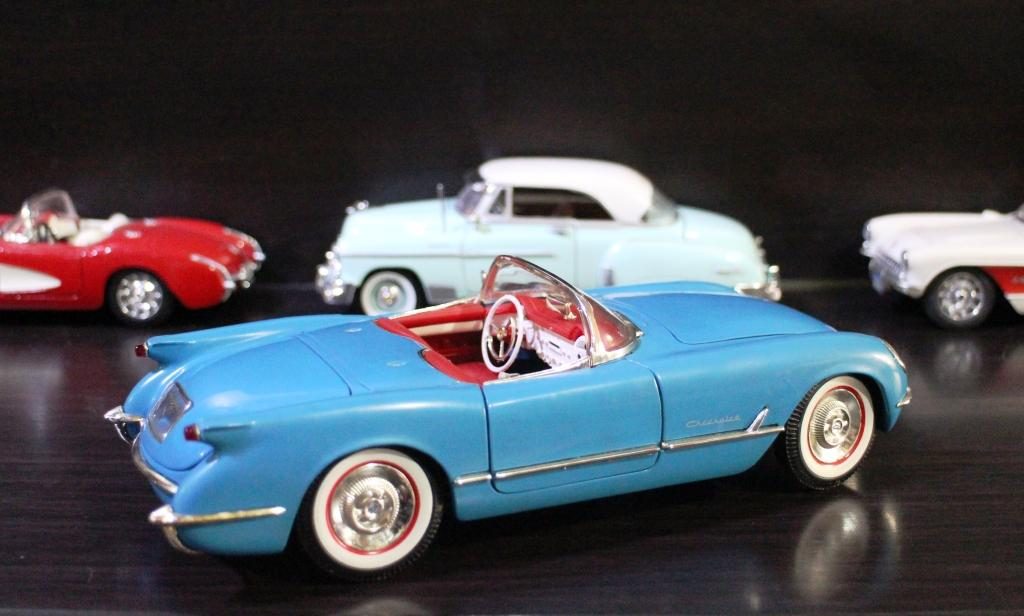 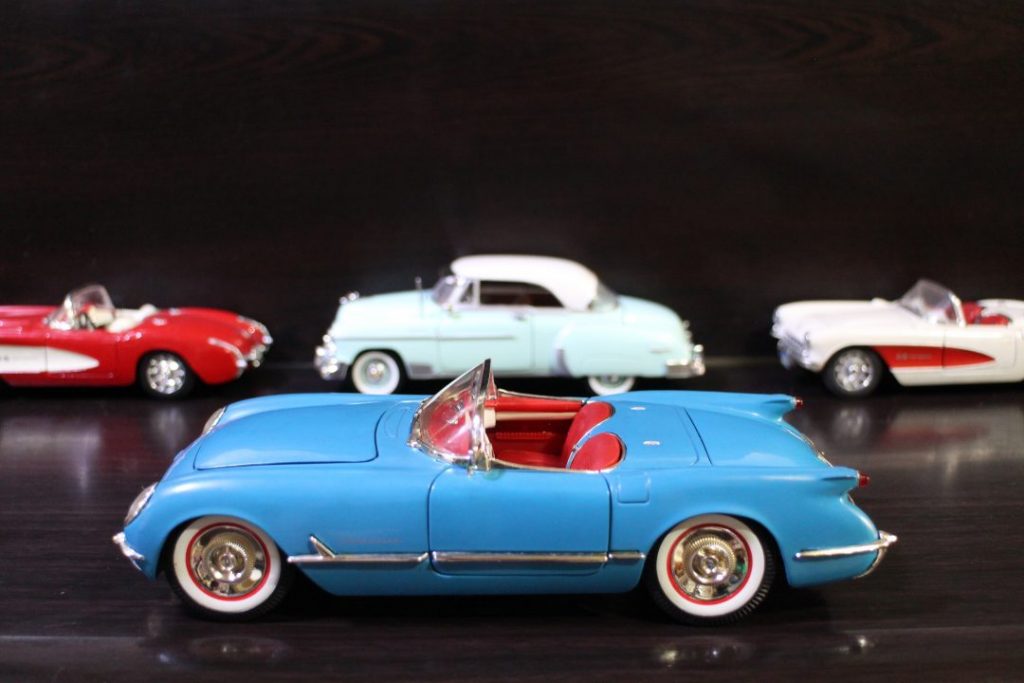 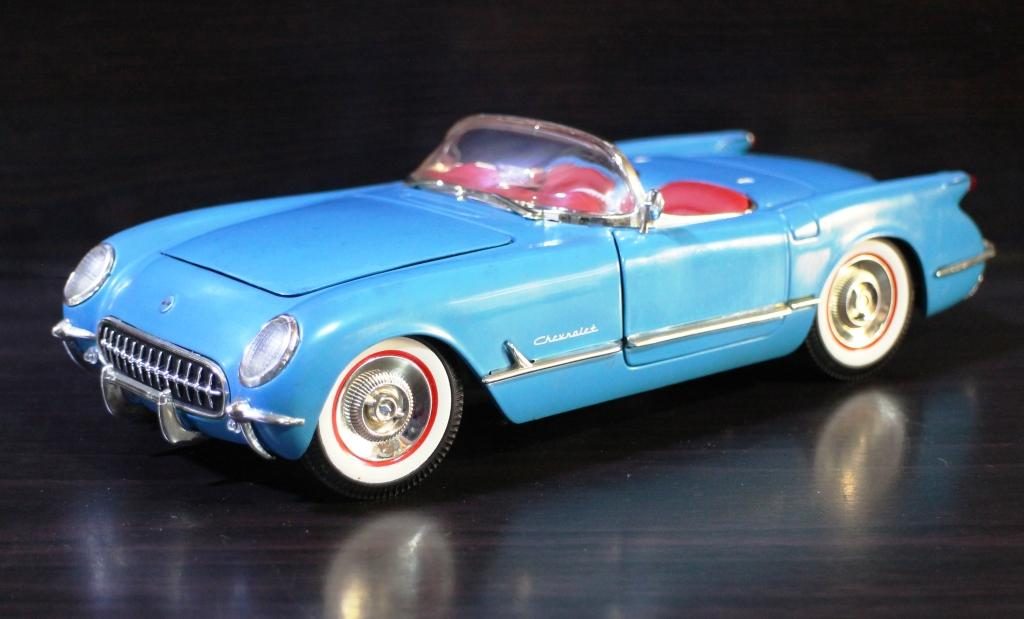 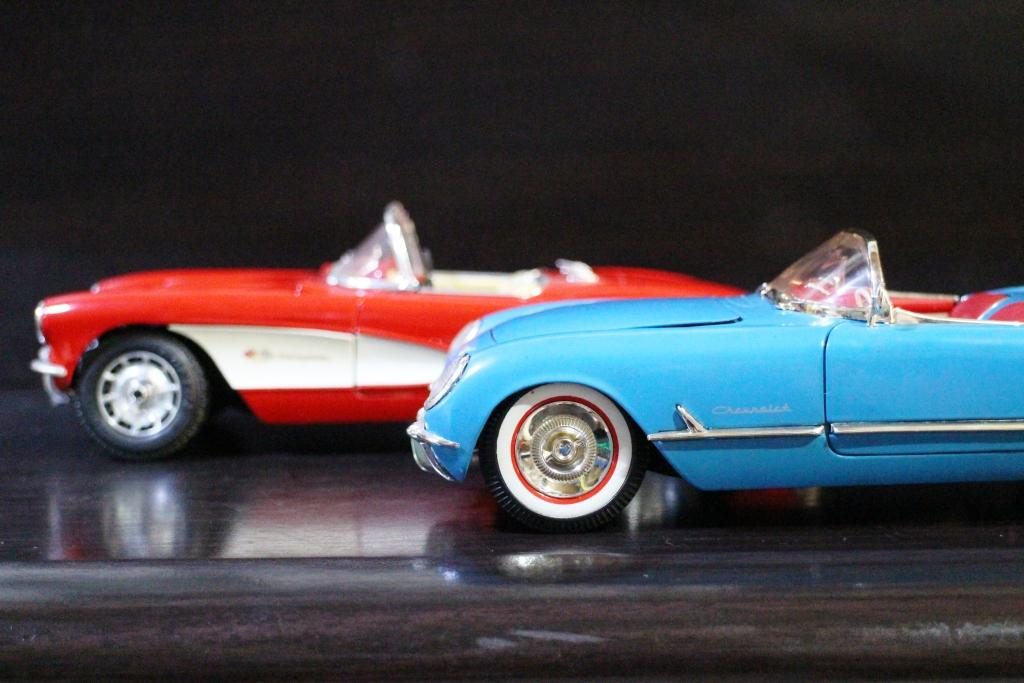 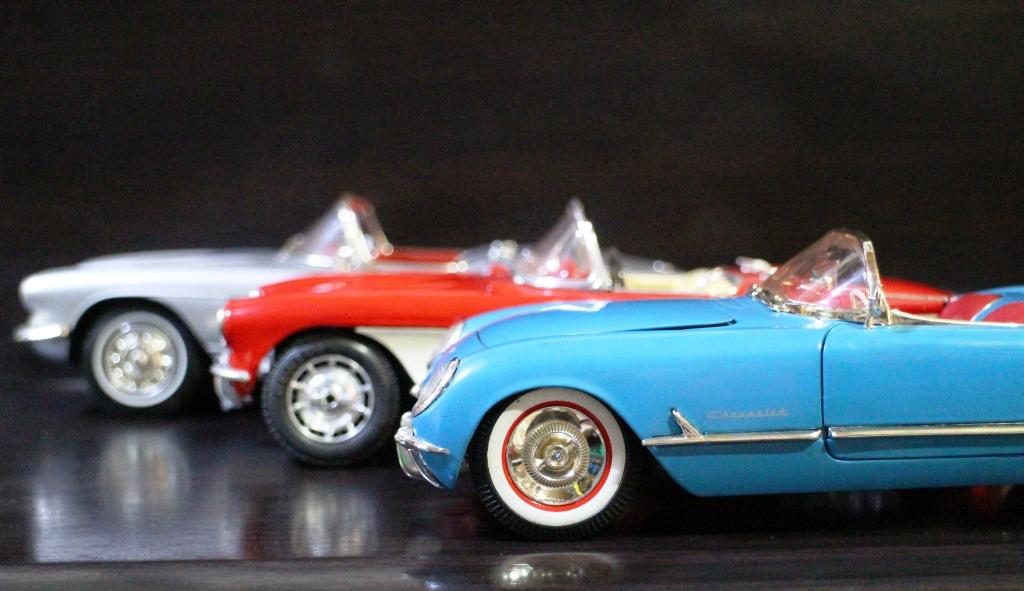 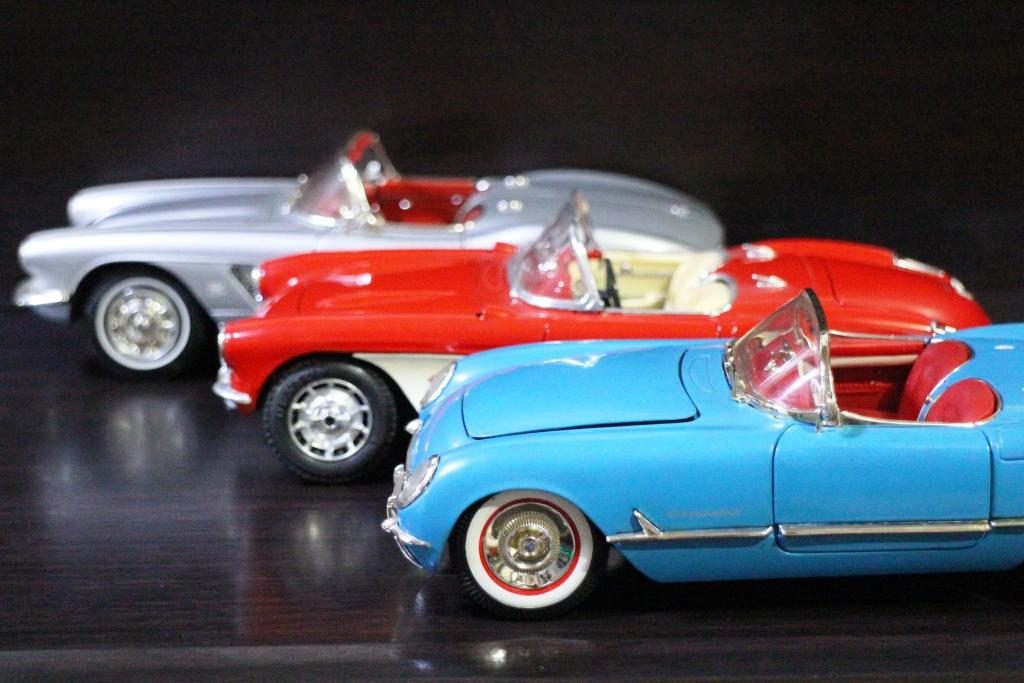 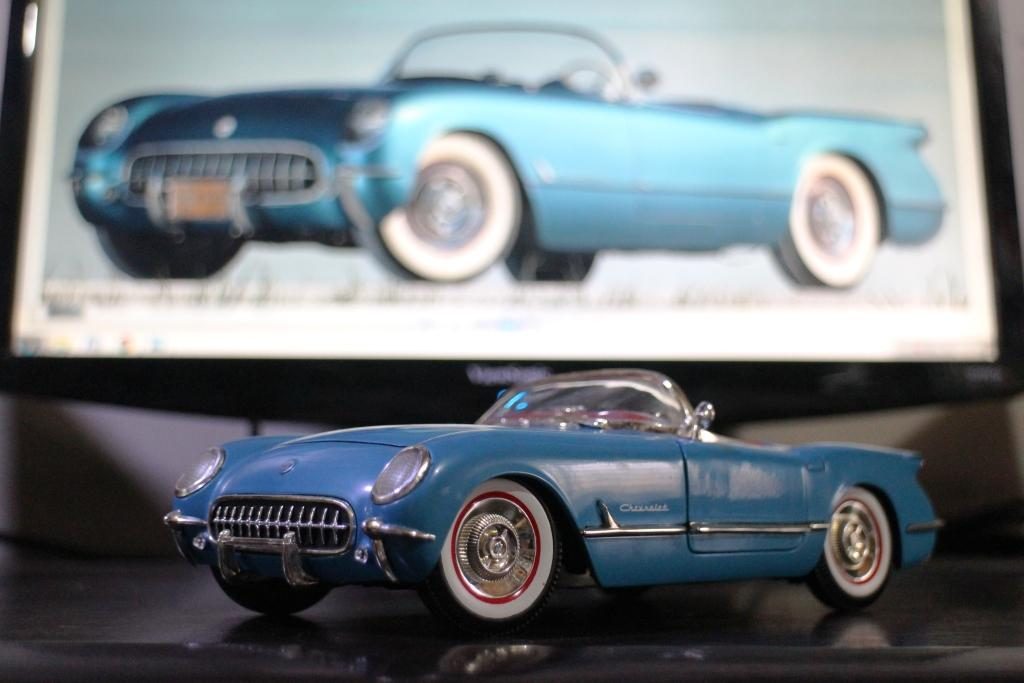