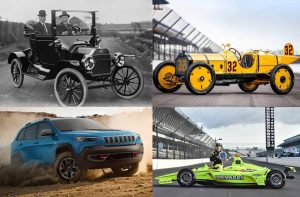 What does the 1910 Ford Model T, the 2019 Jeep Cherokee, the 1911 Marmon Wasp race car, and the 2019 Penske-Chevrolet race car have in common? Aside from the fact that the Ford and the Jeep are vehicles you can buy from the dealership and the two race cars won the Indianapolis 500, they have nothing much in common… except for the fact that they all roll on Firestone tires.

One of the world’s oldest and most popular tire brand will celebrate 120 years of continuous operation this year. Let us take a look at the highlights – the glorious successes and the stinging tribulations – that made Firestone one of the most enduring tire brands to date.

1900    The Firestone Tire and Rubber Company is founded by Harvey Samuel Firestone in Akron, Ohio on August 3, 1900 with 12 employees. The company is formed to supply solid rubber side-wire tires for fire apparatus, and later, pneumatic tires for wagons, buggies, and other forms of wheeled transportation common in the era. Henry Ford, Thomas Edison and Harvey Firestone were the titans of American industry during their time.

1906    Harvey Firestone establishes a personal friendship with Henry Ford. Firestone pioneers the mass production of tires and becomes the original equipment supplier of automobile tires for the Ford Motor Company. The company also becomes active in the replacement tire market. 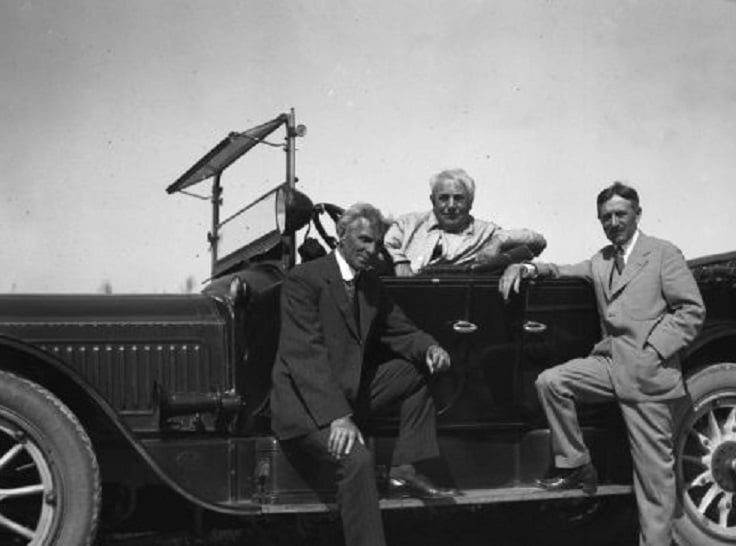 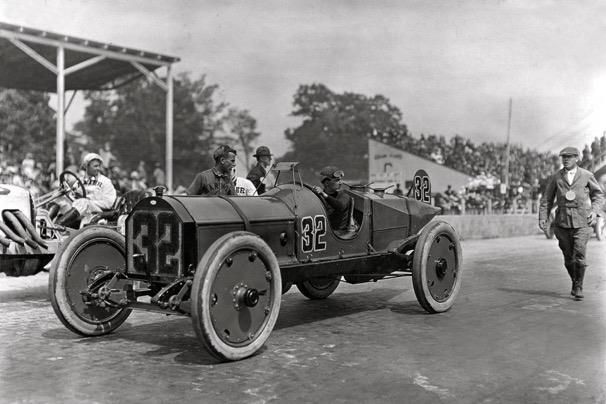 1918    Firestone ventures into the Canadian tire market with the establishment of the Firestone Tire and Rubber Company of Canada in Hamilton, Ontario. 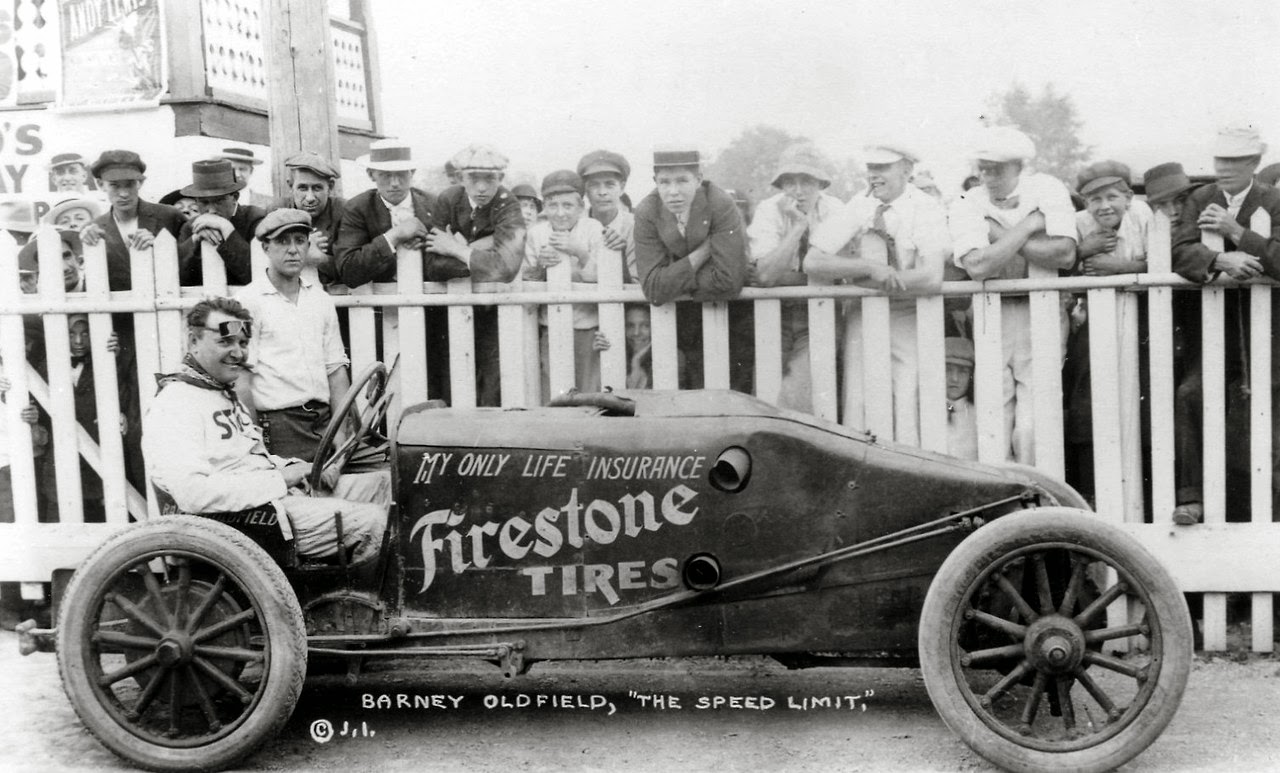 1926    The company establishes the Firestone Natural Rubber plantation in Harbel, Liberia. Spanning more than one million acres (1,560 square miles or 4,050 square kilometers), it becomes the largest rubber plantation in the world. 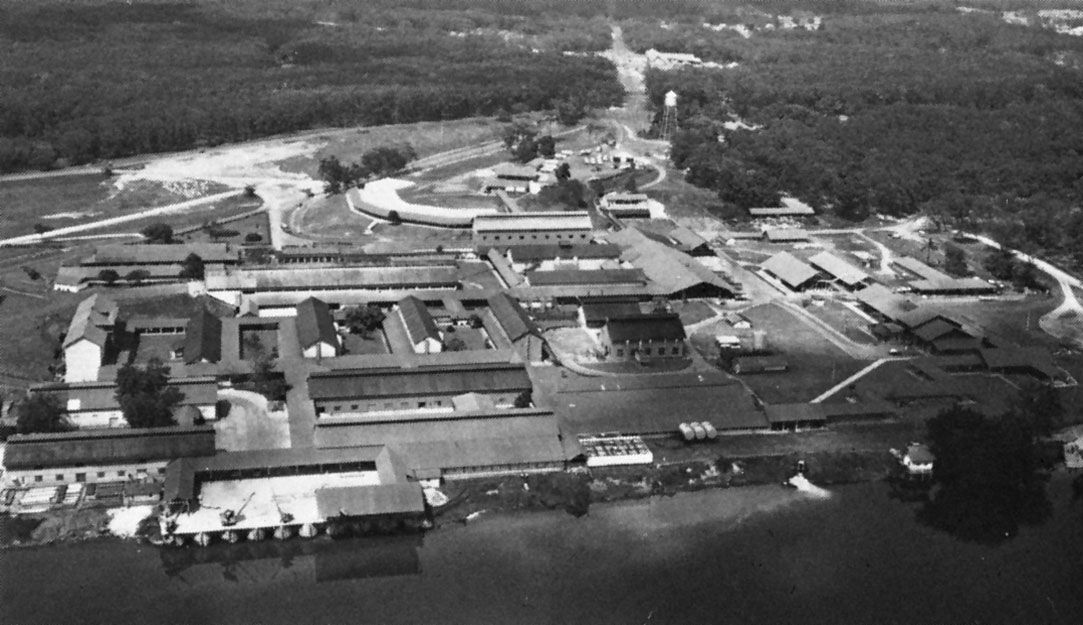 1926    The first Firestone Tire and Service Center is opened in the United States. Later renamed as the Firestone Complete Auto Care, it offers automotive maintenance and repair, including tires sales and service. 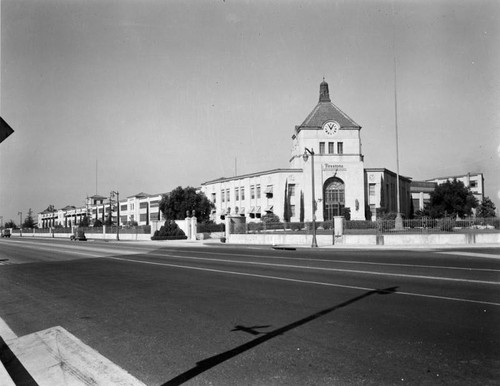 1928    Firestone builds a factory in Brentford, England, which becomes an Art Deco landmark on a major route into the city. 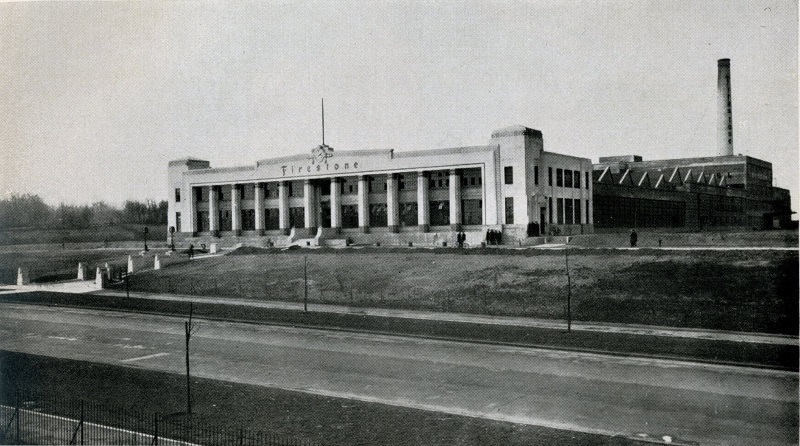 The Firestone factory in Brentford upon its completion in 1928.

1936    Firestone opens a plant in Memphis, Tennessee. With a work force exceeding 3,000 employees, the Memphis plant becomes the largest tire manufacturer in the company’s worldwide operation. 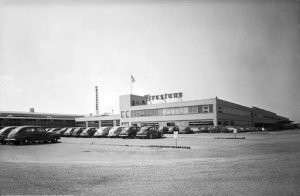 1942    Firestone is called on by the U.S. Government to supply the war effort with artillery shells, aluminum kegs for food transport, plastic helmet liners, barrage balloons and rubberized military products. Firestone was ranked 55th among U.S. corporations in the value of wartime military production contracts. 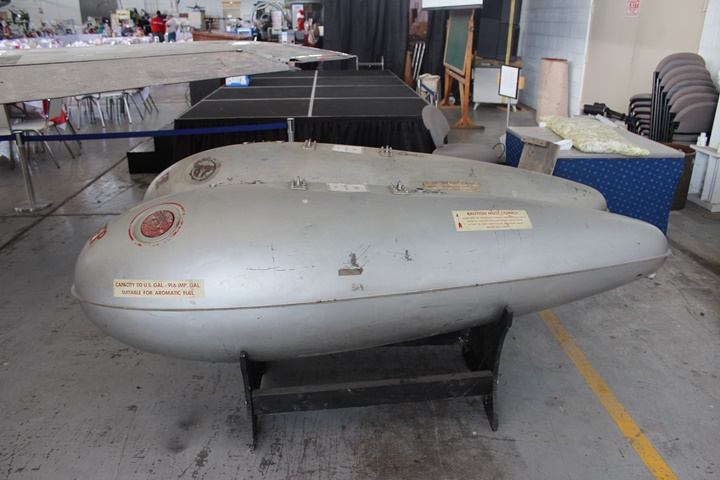 1950    Firestone, along with General Motors and Standard Oil, is convicted of criminal conspiracy for their part in the Great American Streetcar Scandal, where streetcar systems throughout the United States were purchased and dismantled, and then replaced with buses.

1950    Firestone starts providing racing tires to Formula 5000 and Formula One. 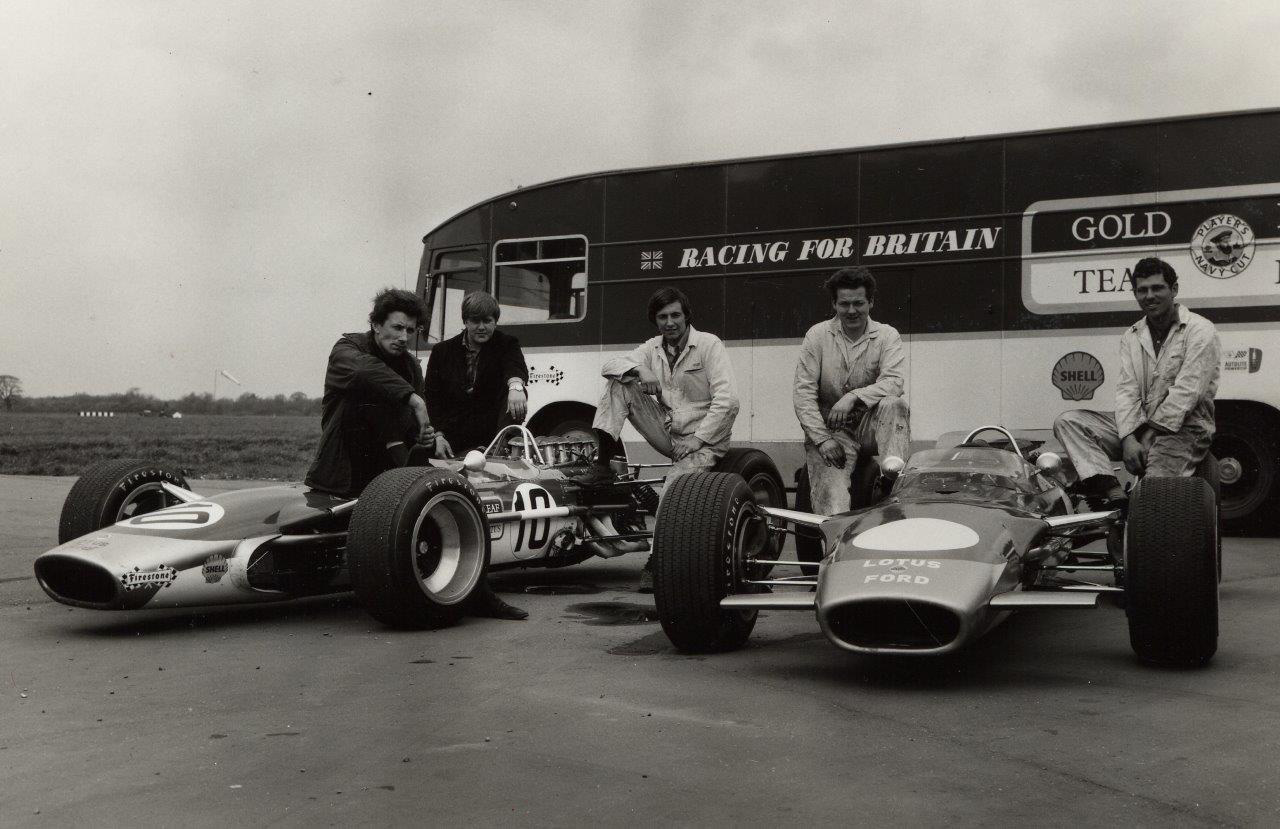 1951    Firestone gets the defense contract to build the 200 MGM-5 Corporal missile units for $6,888,796. The MGM-5 Corporal is a surface-to-surface guided missile which could deliver a high-explosive warhead up to 75 nautical miles (140 kilometers).

1954    The Firestone South Gate factory grows to nearly one million square feet (23 acres or 9.3 hectares). The town grew around the Firestone plant and named its main road, Firestone Boulevard, named after the company founder. L.A. becomes the Number One tire market in the country. 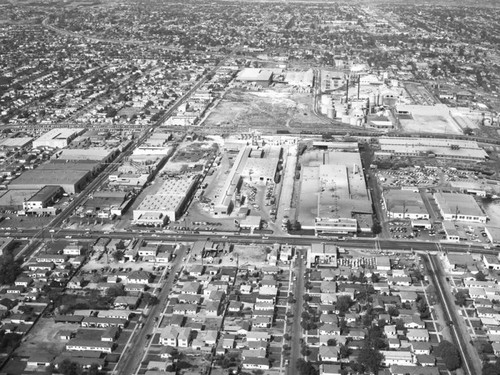 1961    Firestone buys the Dayton Tire division from the Dayco Corporation. 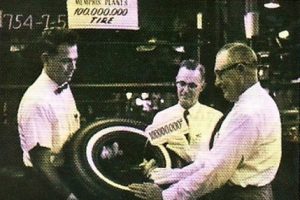 1971    The company introduces the Firestone 500 Radial tires to rival B.F. Goodrich and Michelin radial tires. Because of costs considerations, the radial tires are produced on molds and machines that make bias-ply tires. 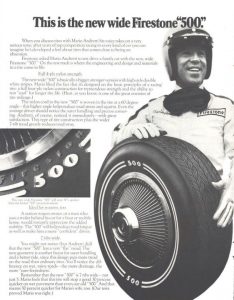 1972    Firestone invests in a tire manufacturing plant in Kenya, East Africa and receives a ten-year import concession from the Kenyan government.

1973    Firestone introduces strict quality control measures in an attempt to fix the inherent problems of the Firestone 500 Radial tires.

1974    Firestone announces its complete withdrawal from professional motorsports at the end of the season and cites rising costs as the primary reason. 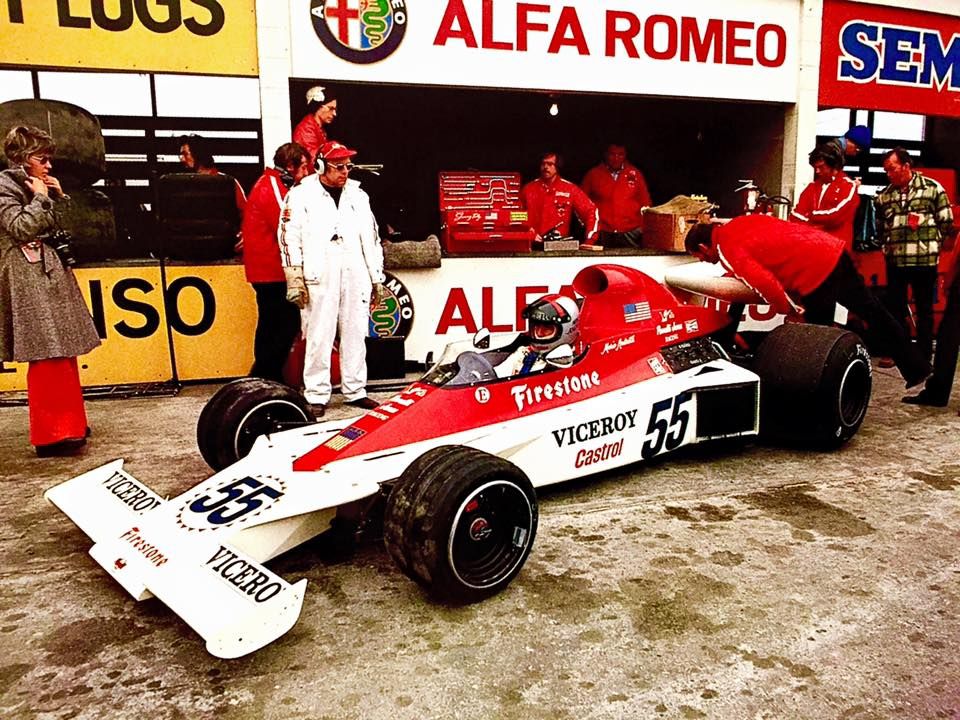 1978    Firestone recalls over 7 million Firestone 500 Radial tires, the largest tire recall to date. The U.S. Congress starts public hearings about the tire, which was alleged to be defective and the cause of 250 deaths. The National Highway Traffic Safety Administration (NHTSA) conducts a formal investigation of the Firestone 500. 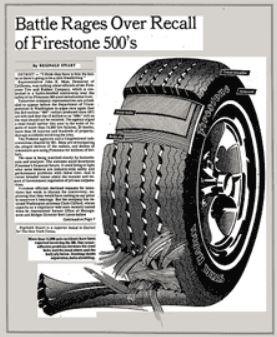 1979    The Firestone factory in Brentford, England is closed.

1979    Firestone hires John Joseph Nevin, the former head of Zenith Electronics, as president to save the hemorrhaging company from total collapse. Firestone was more than a billion dollars in debt at the time and was losing $250 million a year. To boost the stock price of the company and make the company financially solvent, Nevin closed 9 of Firestone’s 17 manufacturing plants, relocated the company from Akron to Chicago, and sold non-tire related businesses, including the Firestone Country Club.

1980    After considerable downsizing, the Firestone South Gate plant is closed and 1,300 workers were laid off. East Los Angeles College proposes a new satellite campus at the site.

1980    The NHTSA fines Firestone US$500,000, which is the largest fine imposed on any U.S. corporation and the largest civil penalty imposed since passage of the 1966 National Traffic and Motor Vehicle Act. Multiple lawsuits are settled out of court and the constant negative publicity cripples Firestone’s sales and share prices.

1982    The Firestone plant in Memphis, Tennessee is closed.

1988    The Firestone Tire and Rubber Company is sold to the Bridgestone Corporation of Japan. 1992    Firestone resumes operations of its Harbel plantation in Liberia in March but ceases operations in October as hostilities escalate. 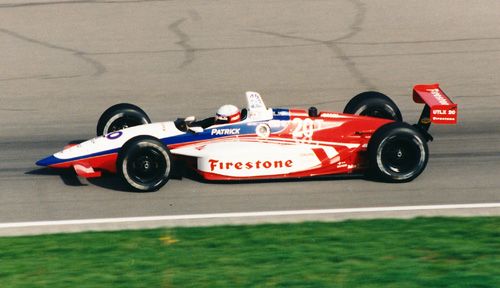 1996    Several state agencies in Arizona experiences major issues with Firestone tires mounted on Ford Explorer sport utility vehicles (SUVs). Firestone conducted an investigation of the complaints, tested the tires, and asserted that the tires had been abused or under-inflated.

2000    After Goodyear withdrew from motorsports, Firestone is left as the single supplier of racing tires for the IndyCar Series. 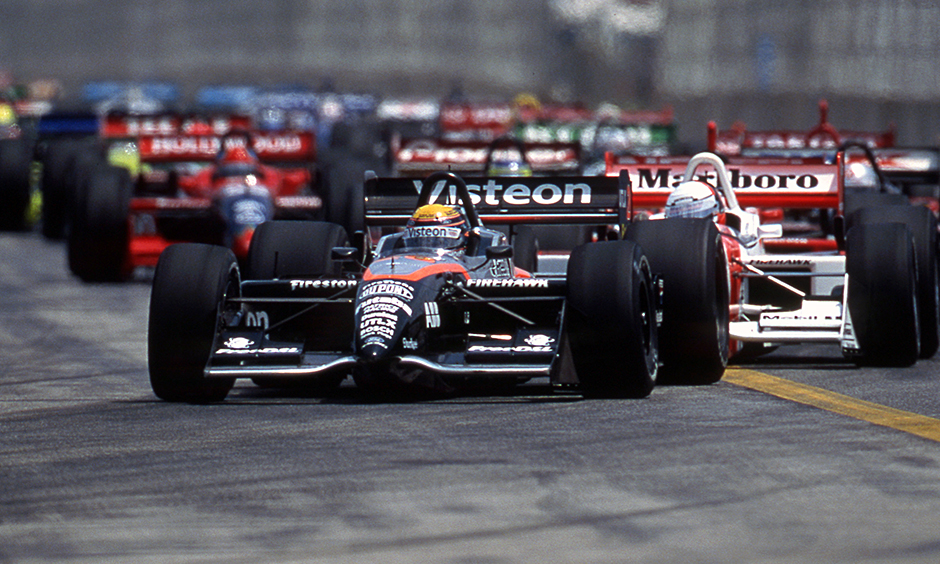 2001    Bridgestone/Firestone severs its ties to the Ford Motor Company citing a lack of trust, which stemmed from concerns that Ford did not heed warnings by Firestone relating to the design of the Explorer.

2003    Firestone restarts operations of its Harbel plantation in Liberia after the end of the Second Liberian Civil War. Firestone has invested over $100 million in restoring and rebuilding its facilities in Liberia, which attracted controversies and conspiracy theories. 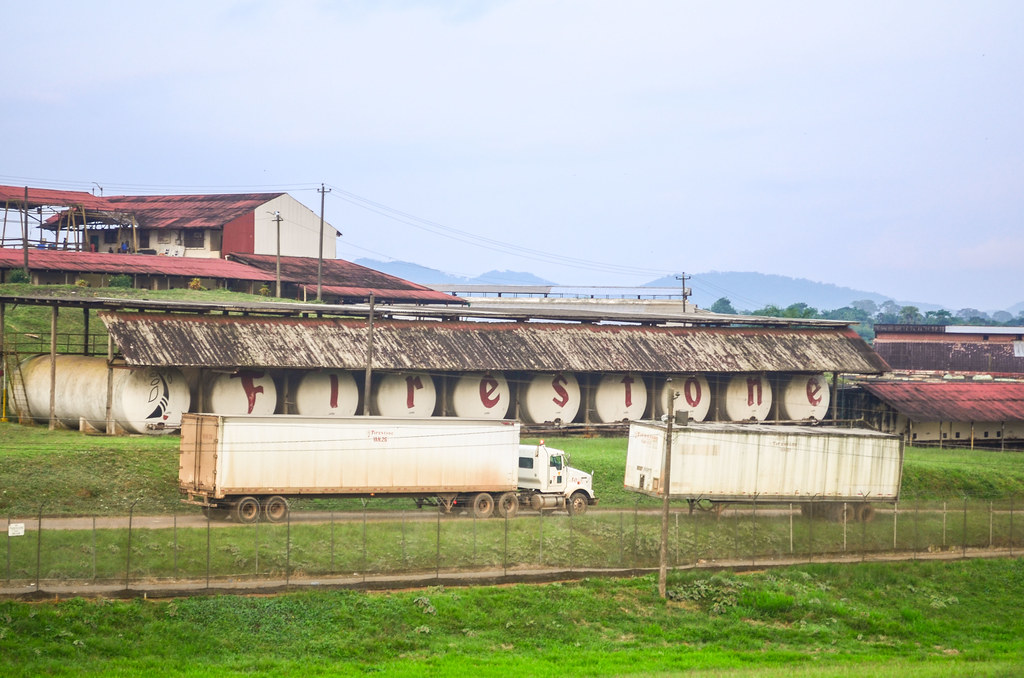 2006    Firestone announces renewed efforts to recall Wilderness AT, Firestone ATX and ATX II tires that were recalled in 2000 after the tires were linked to recent deaths and injuries.

2008    Bridgestone/Firestone celebrates the 20th anniversary of their merger and changes the tire division name to Bridgestone Americas Tire Operations. 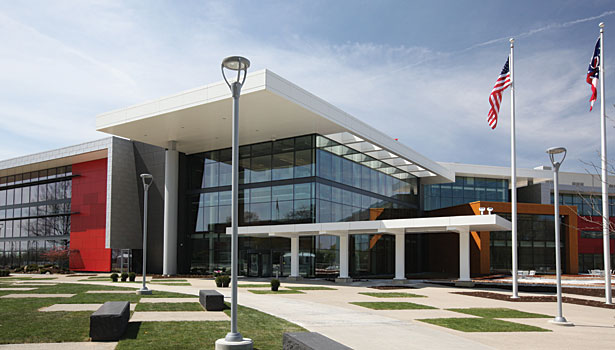 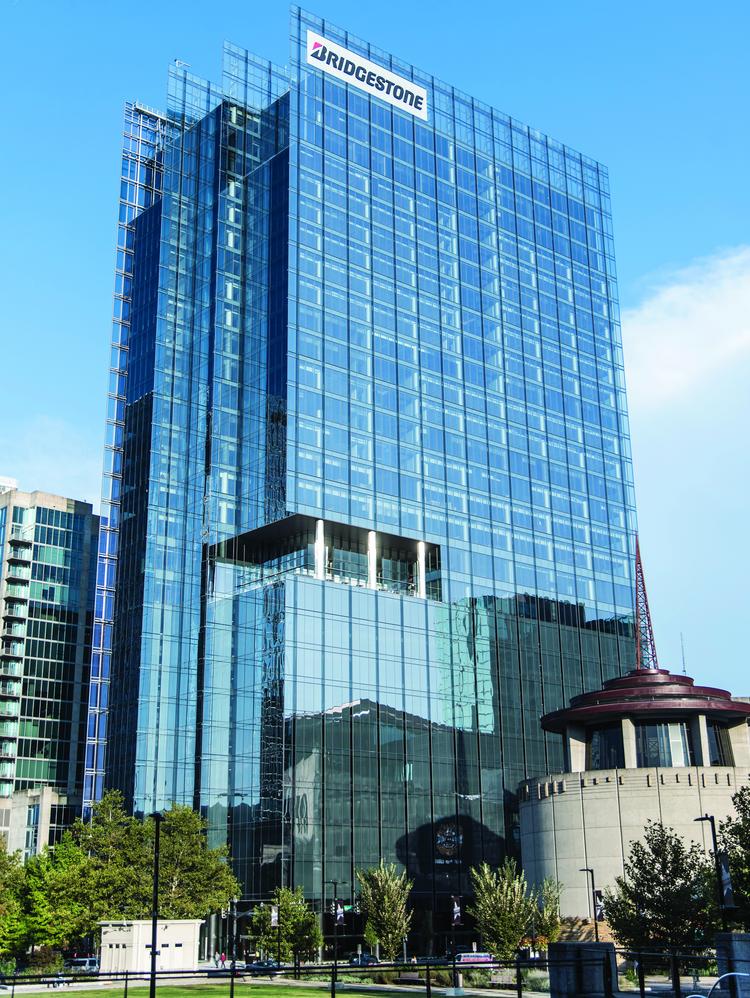 2018    Bridgestone/Firestone celebrates the 30th anniversary of their merger with the reintroduction of Firestone tires in the Philippines through Philippine Allied Enterprises Corporation (PAEC), the country’s exclusive distributor of Bridgestone tires. Initial offerings include the Firestone FS100 passenger car tires, followed by the FS555 commercial vehicle and truck tires. 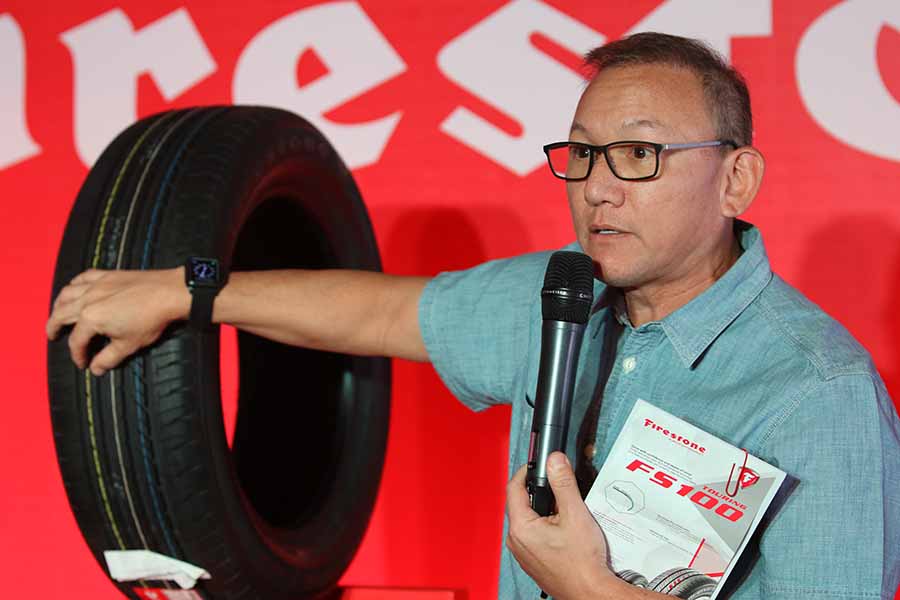 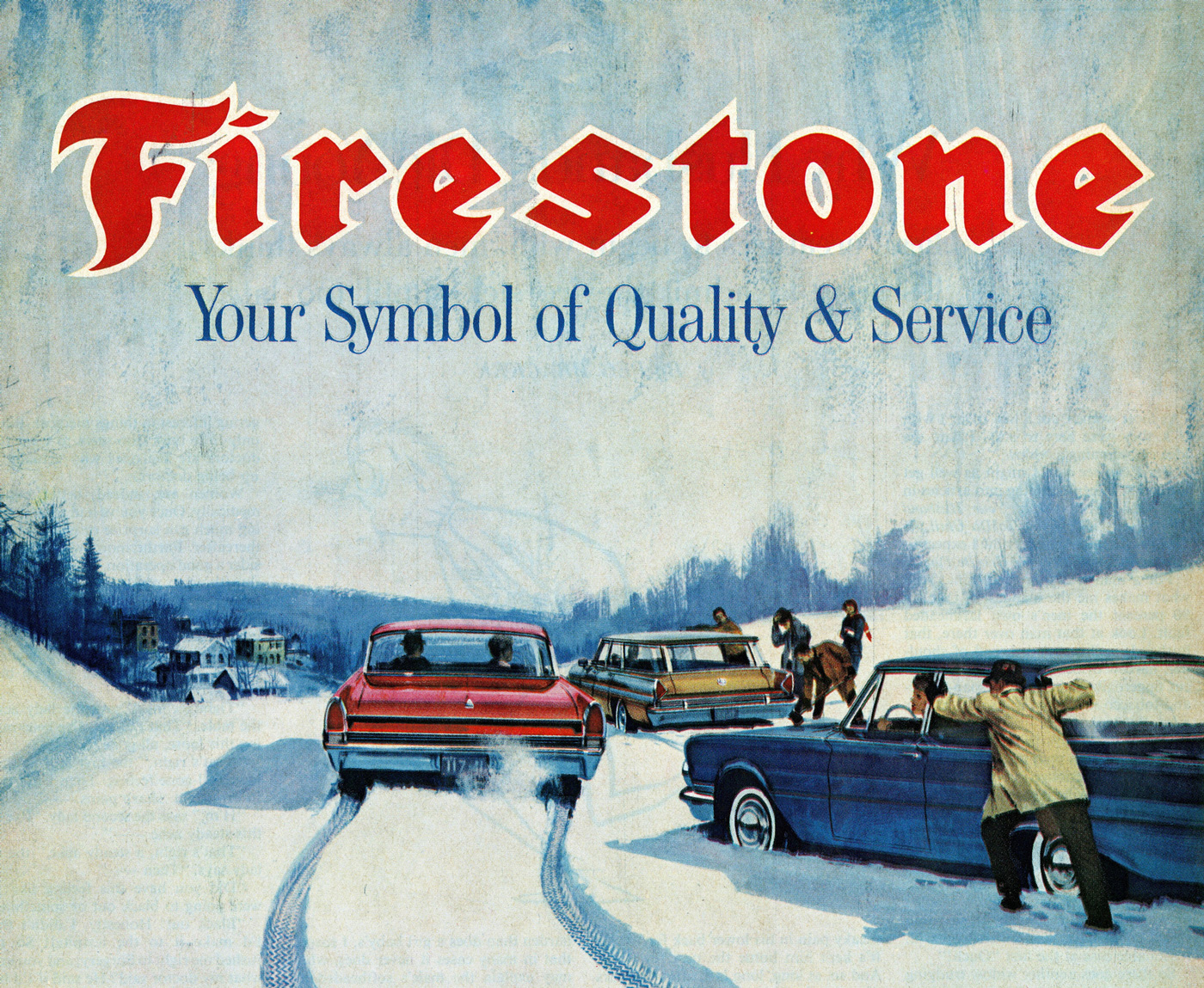 Indeed, Firestone has experienced unparalleled successes as well as painful setbacks throughout its 120 years of operations. Through it all, the Firestone brand has endured and thrived under its partnership with Bridgestone. 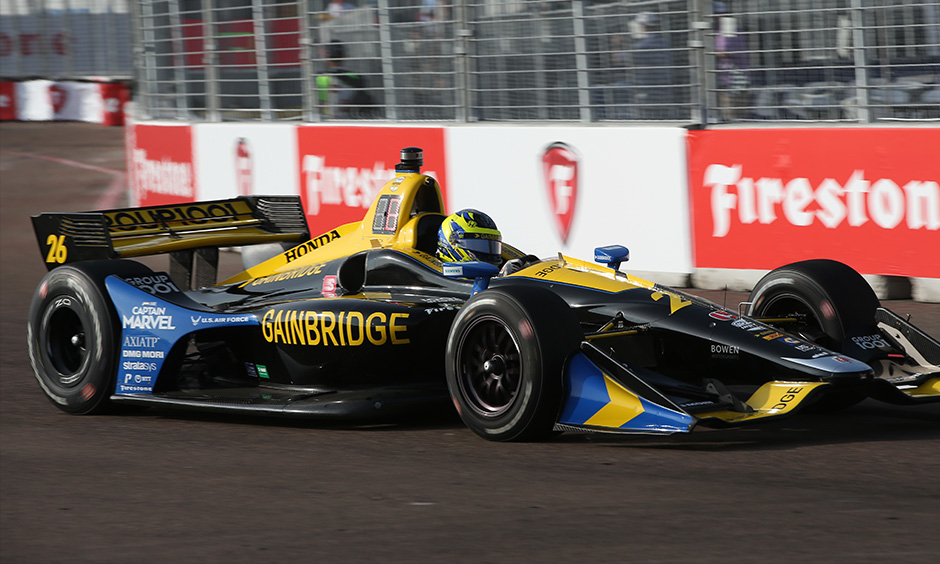 In the Philippines, Firestone tires are distributed by Philippine Allied Enterprises Corporation (PAEC) through its numerous Bridgestone/Firestone tire dealers nationwide. 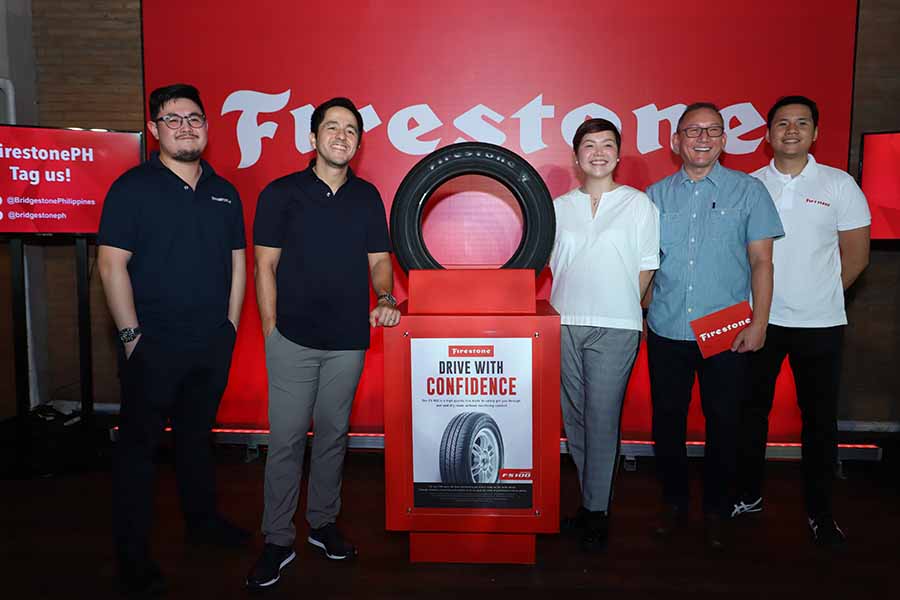