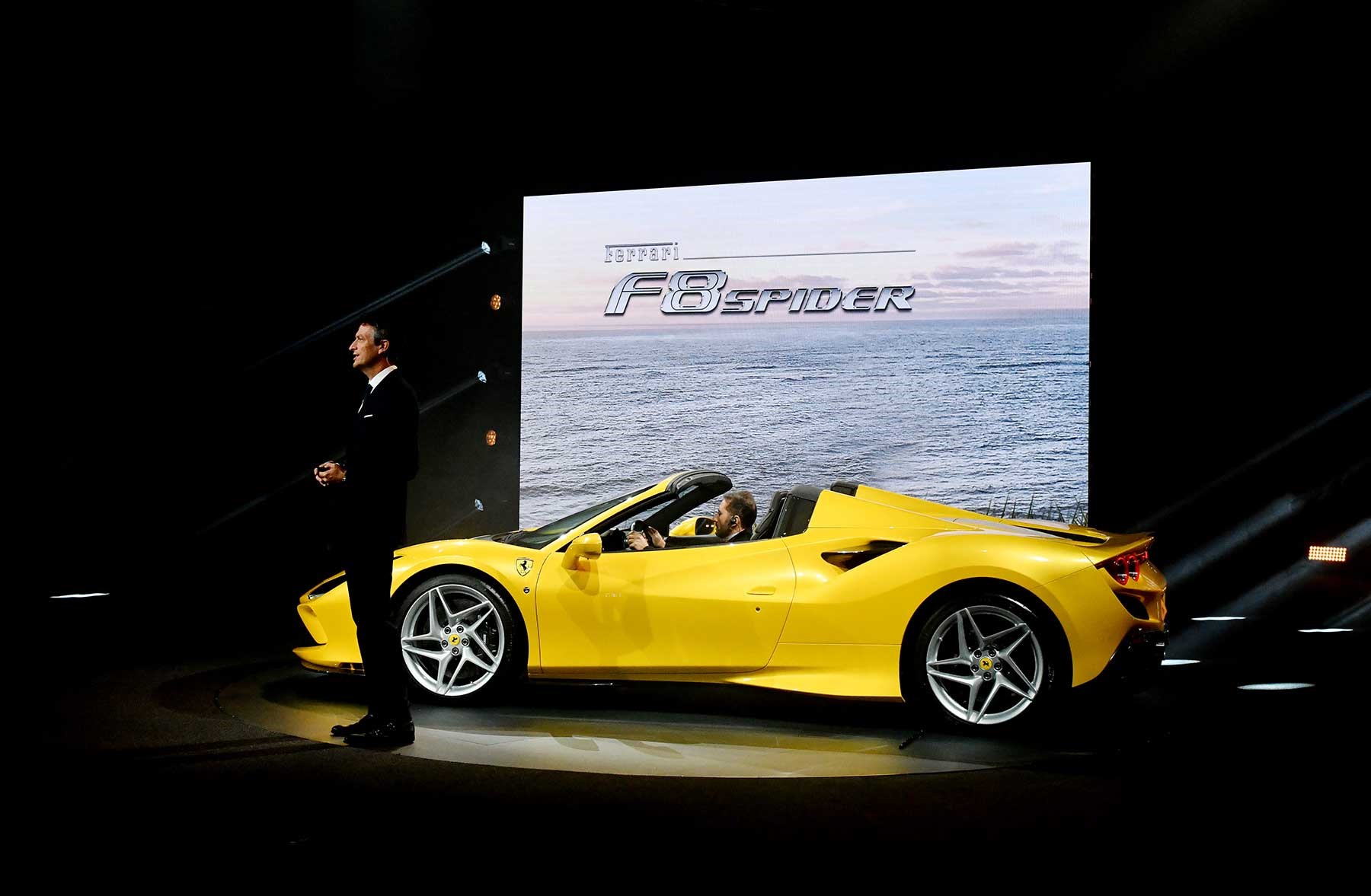 Ferrari unveiled their new F8 Spider on September 9, 2019 in Maranello. The new generation drop-top sports car is powered by the most successful mid-rear-mounted V8 engine in history. The F8 Spider was designed in parallel with the F8 Tributo Berlinetta and features the company’s compact and efficient Retractable Hard Top (RHT). The new Ferrari convertible is the latest addition to an exclusive and prestigious bloodline of open-top V8 cars begun with the 308 GTS in 1977. It is less extreme than the 488 Pista Spider but sportier than the 488 Spider that it replaces in the model range.

Consequently,the F8 Spider sets a new benchmark for its sports car segment in terms of usable performance and exceptional handling, providing an incredibly rewarding driving experience. In fact, it excels in merging handling dynamics with surprising in-car comfort. This Ferrari spider combines the characteristics of the most lauded 8-cylinder engine in history with unparalleled driving pleasure. The V8 has raised the performance bar to unprecedented new heights, not only for turbo engines but for power units of all types. The engine is a development of the V8 that won the International Engine of the Year Award for four consecutive years (2016, 2017, 2018 and 2019) and that was also selected as the best engine of the last two decades. An incredible feat unmatched in the history of the awards. 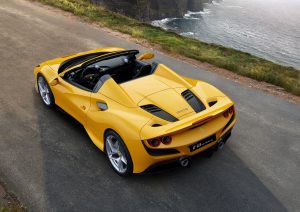 The F8 Spider unleashes its power instantaneously with zero turbo lag while retaining the unique and very special V8 soundtrack. This astonishing performance and the car’s disarmingly effortless handling were made possible by integrating a series of innovative, track-derived aerodynamic solutions into its design. The F8 Spider replaces the 488 Spider and improves on all aspects of its specifications. The engine delivers around 50 horsepower more yet this new Ferrari is 20 kilograms lighter than its predecessor. The F8 Spider weighs just 20 kg more than the more extreme 488 Pista Spider but it is also significantly more aerodynamically efficient, too and features the new 6.1 version of the Side Slip Angle Control system. 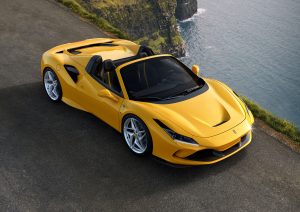 The Ferrari F8 Spider’s V8 engine is mid-rear-mounted, which is an architecture that  Ferrari has been honing for over four decades to optimally balance weight to achieve near-perfect handling dynamics. The 3902 cc V8 produces 710 horsepower at 8,000 rpm and 770 Newton-meters of torque at 3,250 rpm with an impressive specific power output of around 182 hp per liter. This power unit in particular further enhances the typical traits of all Maranello engines with smoothly progressive, limitless acceleration and zero turbo lag, combined with a unique soundtrack courtesy of a new exhaust system. Instantaneously accessible power is matched by exceptional handling thanks to advanced vehicle dynamics solutions. These include a new version of the Ferrari Dynamic Enhancer (FDE+) which can now be activated in the manettino’s RACE position, a move designed to make performance on the limit easier to reach and control.

To achieve the increased power, the F8 Spider’s intake line is derived directly from the 488 Challenge. The air intakes have been moved from the flanks to the rear where they are located on either side of the blown spoiler and are directly connected to the intake plenums. This drastically reduces losses and ensures greater air flow to the engine, thereby increasing the power. The air flow also benefits from increased dynamic pressure created by the shape of the rear spoiler. Adaptive Performance Launch analyses grip as the car accelerates and then uses electronic controls to optimize the torque delivered to suit the road’s grip level, reducing wheel slip to a minimum which, in turn, maximizes acceleration. 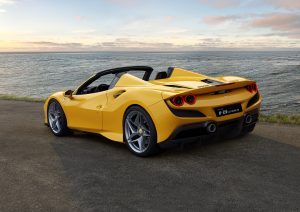 The rev limiter’s “Wall Effect” strategy is another leap forward in terms of extreme engine performance. Rather than gradually limiting the revs towards the limit, it cuts off right at the 8,000 rpm red-line, maximizing the amount of power available in power-on dynamic driving situations and consequently improving lap times. Adopted once again on this model is the hugely successful Ferrari Variable Torque Management strategy for all gears. To adapt it to the car’s extreme sporty spirit, all of the torque curves were redesigned to deliver a feeling of consistently smooth, powerful acceleration all the way to the red line. Maximum torque is 10 Nm higher than on the 488 Spider and is available even at lower engine speeds. 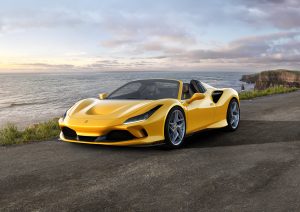 A Tribute to the Engine

Designed by the Ferrari Styling Center, the F8 Spider continues the direction embarked upon with the F8 Tributo which acted as a bridge to a new design language that will continue to emphasize Ferrari’s key characteristics of high performance and extreme aerodynamic efficiency. When designing a spider, the choice of the top will always play a fundamental role in the car’s overall look. For some years now, Ferrari has been adopting a hard top because of the comfort it provides. As a result, the design of the F8 Spider’s lines was crafted around its Retractable Hard Top. The key to the whole design was the shifting of the separation line between the car’s body and the roof from its conventional position at the belt-line (occupant shoulder level) to above the B-pillar. The top itself is thus more compact and two-dimensional, with the result that it can be divided into two parts and stowed on top of the engine. The RHT takes just 14 seconds to deploy or retract and can be closed or opened while the car is on the move up to 45 km/h. 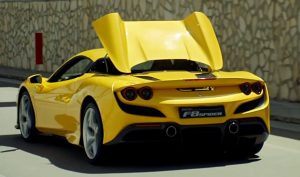 The Ferrari Styling Center set a goal to design the F8 Spider as a stylistic tribute to the Ferrari V8 engine by evolving the contents of the F8 Tributo and taking inspiration from the most iconic mid-rear-engine V8 sports cars in Ferrari history. The result is a car with a strong personality of its own through an even sportier design clearly inspired by the car’s advanced aerodynamics. The front view of the car is characterized by the S-Duct around which the entire front end has been redesigned to highlight the extensive aerodynamic modifications made to this area of the car. The clearest example is new, more compact, horizontal LED headlights. 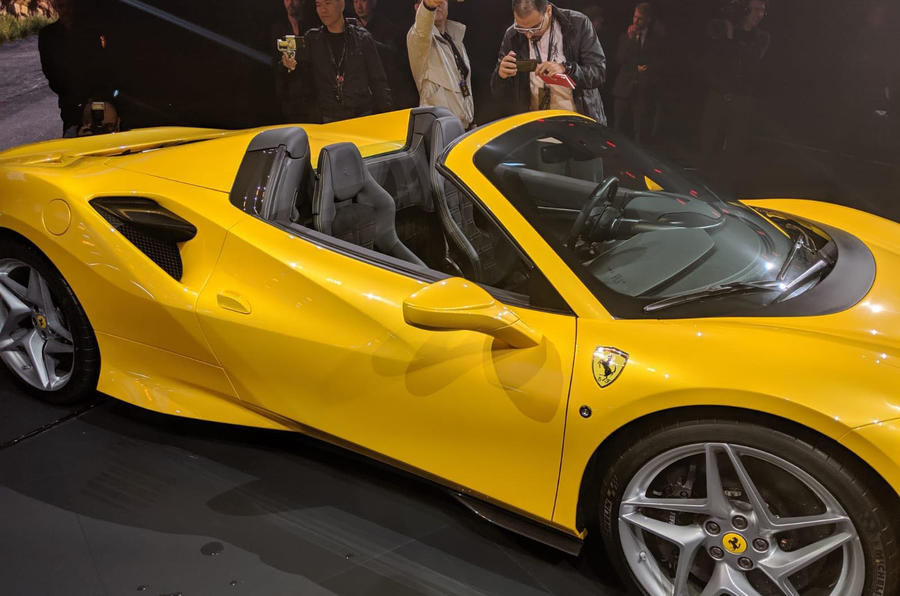 The rear spoiler has been entirely redesigned. It is now larger and wraps around the tail lights, visually lowering the car’s centre of gravity and allowing a return to the classic twin light cluster and body-colored tail, another styling cue from the early 8-cylinder berlinettas like the very first in the legendary series, the 308 GTB. The treatment of the engine cover is one of the F8 Spider’s most distinctive characteristics. The manta-like look of the cover is created by a central spine that starts from the rear screen and disappears under the wing of the blown spoiler, following the air flows by themselves. 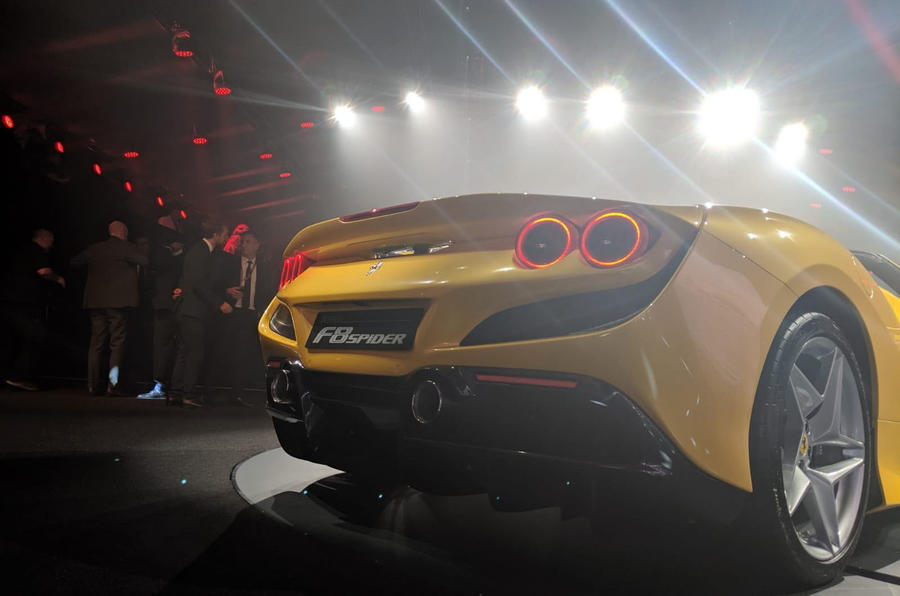 The two wings that emerge from the central volume meld harmoniously with the bodywork, lending a sense of visual continuity from all angles. These wing elements are suspended creating an air vent below them which helps improve dissipation of the heat coming off the engine. The three sculpted strakes on the side elements of the engine cover also make their own contribution to this, in addition to referencing the iconic styling of the rear screen of the coupé version.The strakes are finished in black to reduce weight low and to lend a sense of visual clarity to the design. The crests that emerge from the prominent volumes of the tonneau cover fins flow sinuously rearwards and into the spoiler in an interpretation of the F1 “swan neck” (the pillars supporting the rear wings) which, in turn,enhances the already-powerfully sporty personality of the car. 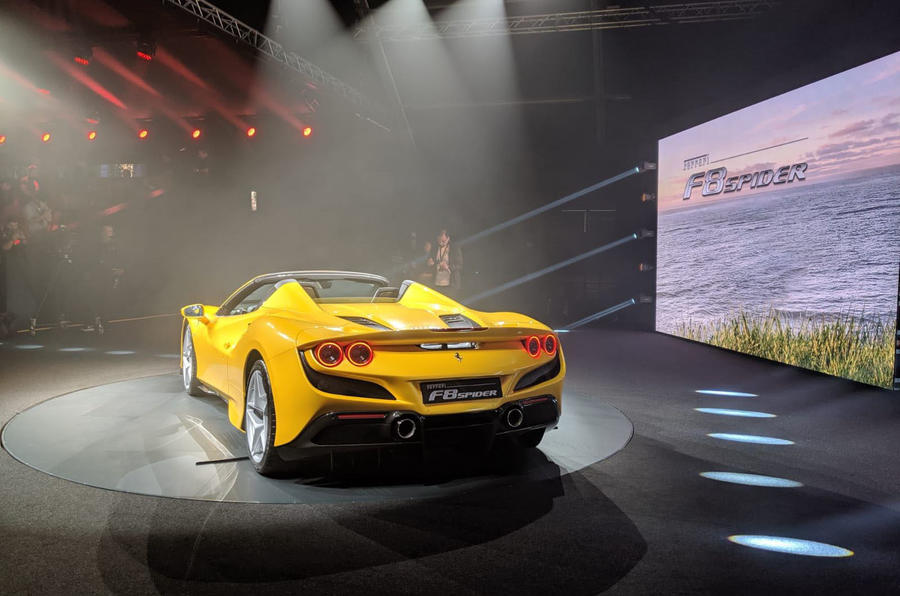 Inside the F8 Spider

The F8 Spider’s cockpit retains the classic, driver-oriented look typical of Ferrari’s mid-rear-engine berlinettas. A concept that creates a symbiotic relationship between driver and car, very much as happens in F1, with all controls mounted on the new generation steering wheel. The sporty seats are also new. The dash incorporates an aluminium sail panel supporting the central satellite and continuing into the dash itself. 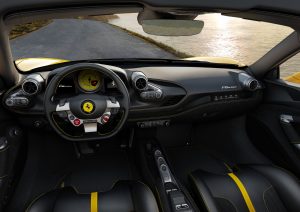 Also to create a sense of visual lightness, a sliver of carbon fibre divides the upper and lower parts, streamlining the whole look. This section also incorporates the optional 7” touchscreen passenger-side display and the dash is completed by the classic instrument cluster with its central rev-counter. The tunnel is clearly separated from the dash and set beneath it, once again to enhance the sensation of lightness that the car’s interior exudes. It features a new bridge, a prominent sculptural creation that seems to float and thus further streamlines the cabin. 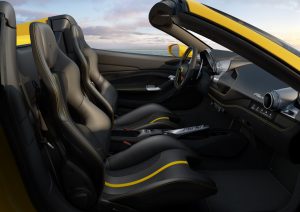 Ferrari’s unparalleled quality standards and increasing focus on client service underpin the extended seven-year maintenance program offered with the F8 Spider. Available across the entire Ferrari range, the program covers all regular maintenance for the first seven years of the car’s life. This scheduled maintenance is an exclusive service that allows clients the certainty that their car is being kept at peak performance and safety over the years. This very special service is also available to owners buying pre-owned Ferraris. 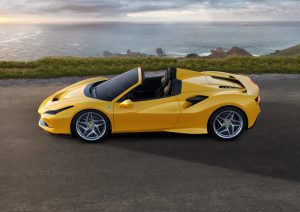 Regular maintenance (at intervals of either 20,000 km or once a year with no mileage restrictions), original spares and meticulous checks by staff trained directly at the Ferrari Training Center in Maranello using the most modern diagnostic tools are just some of the advantages of the Genuine Maintenance Program. The service is available on all markets worldwide and from all Dealerships in the Official Dealership Network. 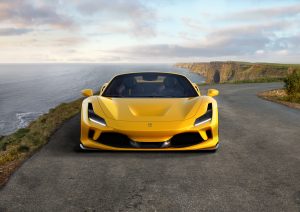 The Genuine Maintenance program further extends the range of after-sales services offered by Ferrari to satisfy clients wishing to preserve the performance and excellence that are the signatures of all cars built at the factory in Maranello which has always been synonymous with leading-edge technology and sportiness. 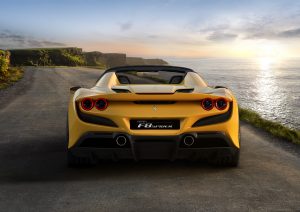