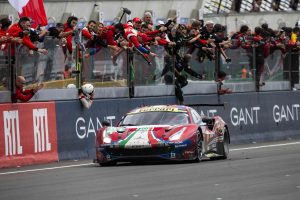 Ferrari has won the 24 Hours of Le Mans for the 36th time. The win was taken by the 488 GTE fielded by AF Corse and driven by Alessandro Pier Guidi, James Calado and Daniel Serra. The victory is the 27th class win for the Prancing Horse, in addition to nine outright wins, the first one clinched 70 years ago at the hands of Luigi Chinetti and Lord Selsdon in the 166 MM bodied by Touring. This marks the first victory in the GTE-Pro class at Le Mans for the 488 GTE as indeed for all the three drivers involved. For Alessandro and James, this rounds off the Super Season in the best possible manner. 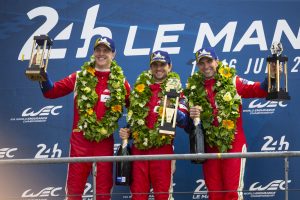 In the GTE-Pro class, the two Ferrari 488 GTEs fielded by AF Corse, cars no. 71 and 51, the Risi Competizione no. 89 were driven respectively by Davide Rigon, Alessandro Pier Guidi and Oliver Jarvis. The two AF Corse cars quickly gained ground, with Ferrari no. 51 soon close behind the top three. With four hours on the clock, the WEC championship-leading Ferrari 51 driven by James Calado had even led the race for a few laps, in a constant battle with three of the Porsches and the no. 63 Corvette. 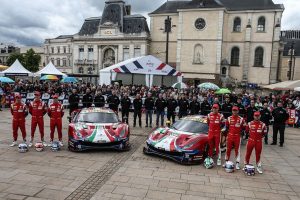 As evening fell so the complications began to arise for car Ferrari no. 71. First off came a ten-second penalty added to the pit stop for failure to comply with the procedure for the Full Course Yellow, before having to endure an unlucky pit stop when the Safety Car came out forcing Sam Bird to wait for the green light at the end of the pit lane. Unfortunately, a mechanical issue put an end to the Ferrari’s hopes shortly after ten hours with some 140 laps covered.

During the night the very tight battle between the Corvettes, Ferrari and Porsche raged on but only the first two cars saw daylight arrive, with the German cars no. 91 and 93 now a distance third and fourth. The extraordinary ability of the AF Corse team to nail precise strategic decisions allowed car 51 to avoid refueling while the safety car was out. The same could not be said for the Corvette, which pitted under another safety car session, losing time waiting for the green light at the end if the pit lane and then spinning off, putting paid to chances of victory. In the final three hours, the AF Corse team and the drivers of car 51, from a strategic point of view, ran a flawless race to finish ahead of everyone with a one-minute advantage over Bruni in the second-place Porsche. 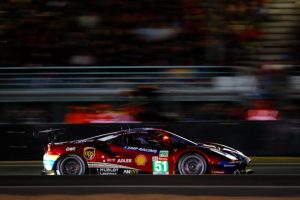 Ferrari teams have frequently battled for podium finishes in this class for gentleman drivers. Three teams in particular stood out: the 488 GTE no. 84 of JMW Motorsport, the 62 of Scuderia Corsa / WeatherTech Racing and the 61 of Clearwater Racing. Jeff Segal, Wei Lu and Rodrigo Baptista held a very fast pace throughout the race, constantly battling for the podium in the cars of Keating Motorsports and Team Project 1. Cooper MacNeil, Rob Smith and Toni Vilander in car no. 62 put up a good fight while in the second part of the race, Luis Perez-Companc, Matteo Cressoni and Matt Griffin emerged before later dropping time some two hours from the end. 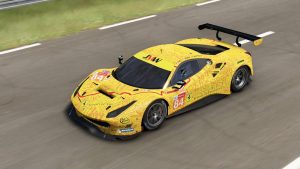 JMW Motorsport, winner in the 2017 season, avoided any errors in the latter stretches to earn a well-deserved podium with a team that included two rookies. There was also a fine run from the Car Guy crew, sixth on their debut with Kei Cozzolino, Takeshi Kimura and Come Ledogar, as well as from the all-female Ferrari team Kessel Racing with Manuela Gostner, Michaela Gatting and Rachel Frey. 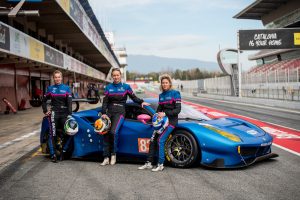 James Calado – AF Corse #51
“We’ve been working hard for this. In the last six months a lot of preparation was made into this and I think this is something we were really wanting more than everything. It was not an easy race at all. It was very up and down, with a few issues and after our sister car had an issue so we had to adapt and change a few things. It was great staff, very demanding but we did it and I am really happy for these guys. These are really super teammates, both very quick and we have an amazing team of people around us.” 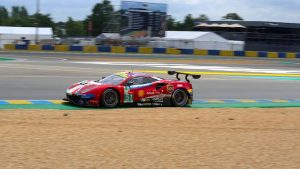 Alessandro Pier Guidi – AF Corse #51
“It was a very tough race. We had a great race, there are a lot of manufacturers so everyone can win and we had to push from the beginning to the end. Being with the red racing suit on the podium listening to the Italian anthem is something special, and looking down seeing so many people is something that you cannot forget. I think we had the perfect race today both for us drivers and for the strategy set by the engineers.” 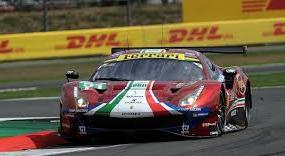 Daniel Serra – AF Corse #51
“It’s unbelievable. I think I am a lucky guy to be at the right place in the right moment. It’s only my third time and I have won twice and that’s difficult to achieve. It’s really special to win in red, I have to say. It is amazing and fantastic. I just drove and they did their job too. They drove amazingly. To watch everything, two guys wanting something so much; they were on a mission and it was nice to watch and to be able to help them.” 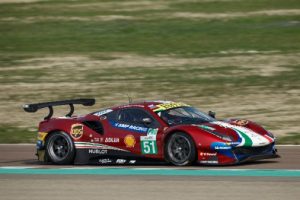 Antonello Coletta – Head of Ferrari Attività Sportive GT
“As we have said in the past, we just want to compete on equal terms with our rivals and that is just what happened in this edition of the 24 Hours of Le Mans. We were able to give a display of how much talent there is in both this Ferrari and the fantastic AF Corse team. Alessandro Pier Guidi, James Calado and Daniel Serra were perfect and knew exactly how to maximize the strategy that our technical team and Amato Ferrari’s men have developed so splendidly. I’m extremely proud; we deserved to win this race in the GTE-Pro class once again, after such a long time, and to do it exactly 70 years after the first win in 1949 is also another reason to be happy. We finish the season with a smile on our faces even though we were sorry to see the retirement of car 71 and we are very pleased with the results obtained in the GTE-Am class. What we have achieved in the race today will motivate us to give even more in preparation for the new season which gets underway in September.” 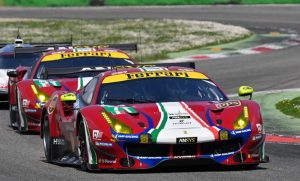