Ferrari Shares Their “Back on Track” Program 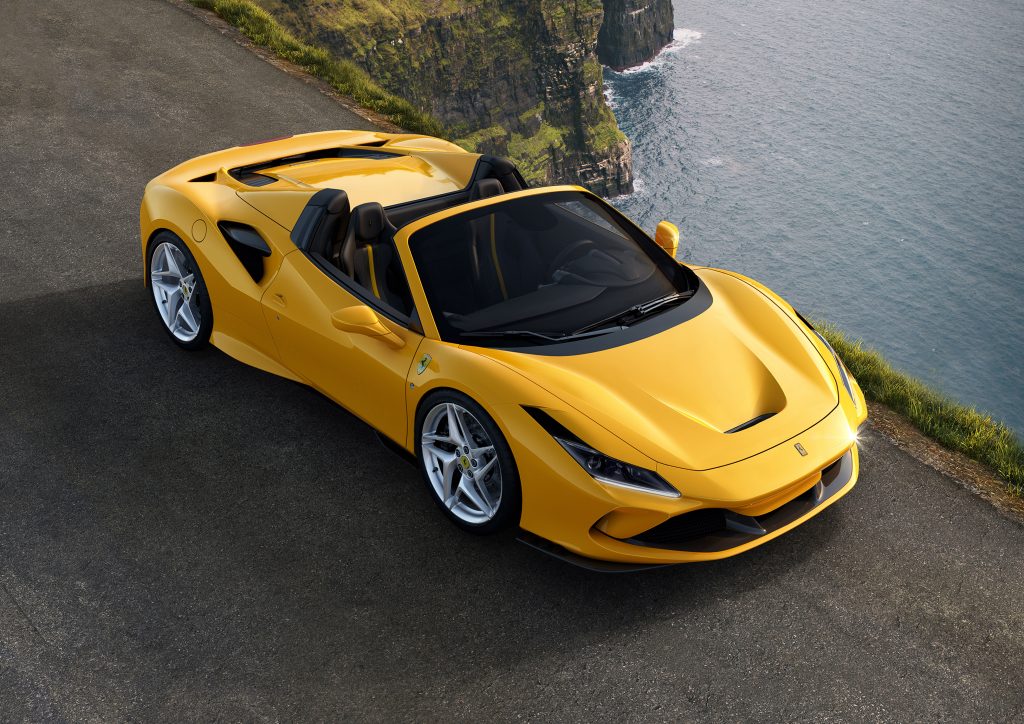 After  the  longest  closing  in  its  history  due  to  the  COVID-19  pandemic, Ferrari production in their Maranello factory will build up gradually to resume full operations on Friday, May 8, 2020 in alignment with Italian government regulations. The company has spared no effort to prepare for this moment by setting up their “Back on  Track”  program, which reflects Ferrari’s deep  commitment to its  people first and foremost. 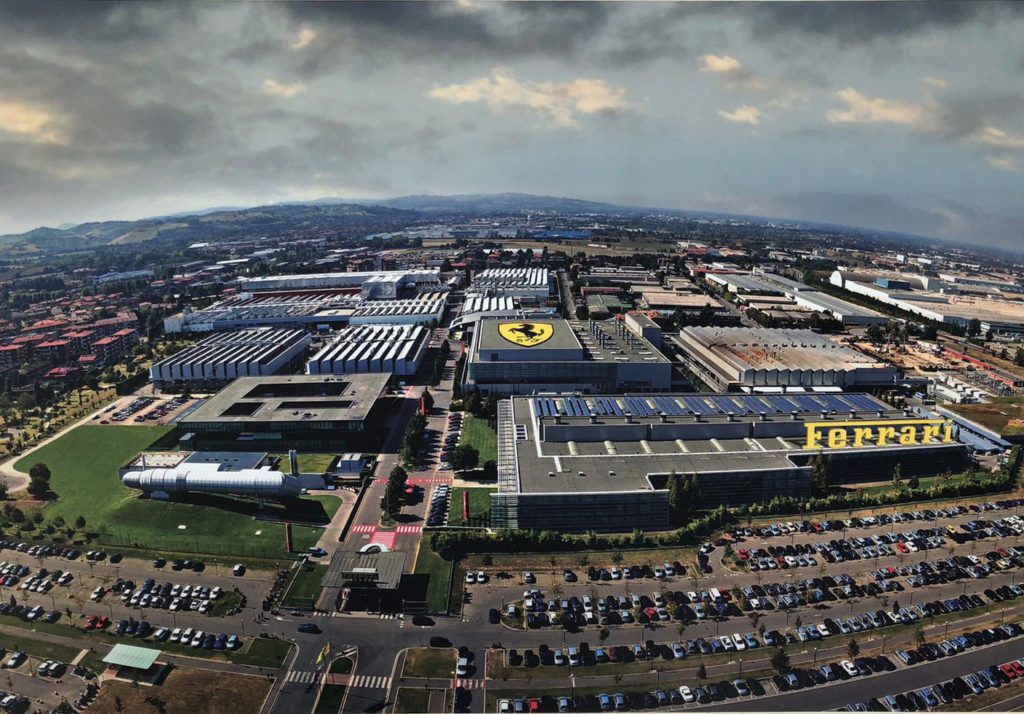 The program includes  the  introduction of several new practices that are aimed at safeguarding the health and well-being of all of the employees, such as new rules and regulations for sharing common areas and reorganizing its areas, as well as voluntary serological tests, which have been implemented in the last few weeks.  Before starting production, Ferrari has also decided to carry out training sessions for workers to explain the new precautionary and safety measures that were put in place. The training sessions were organized last week.

Ferrari has been preparing for their reopening since the start of the crisis. According to Michele Antoniazzi, the company’s Chief Human Resources officer, on January 21, 2020, when the Corona virus was ravaging the population of Wuhan, China, Ferrari executives already asked themselves, “If the virus arrives here in Maranello, what should we do to avoid devastation and survive as a company?” The company’s immediate actions involved placing travel restrictions, distributing protection kits that includes gloves and masks to all employees, repatriating a few employees from abroad, instituting health checks for executives returning from business trips, and closely monitoring the situation. As the infection hit northern Italy hard in February, Ferrari found itself far ahead of the government in imposing restrictive measures to try to slow the spread of the virus, such as prohibiting business travel. 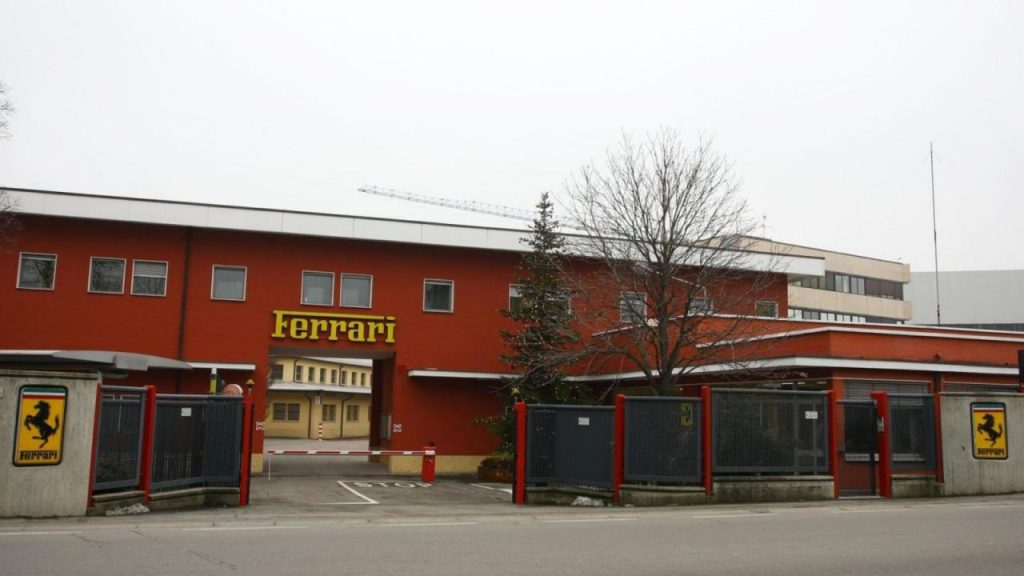 On March 16, Ferrari closed their Maranello factory three days before the Italian government imposed a national lockdown. The company’s leaders made this decision for two main reasons: Employees had increasingly become worried about their safety and health, and suppliers—especially those in the Lombardy region, which turned out to be an epicenter of COVID-19 in Italy—were starting to struggle to deliver. The leaders assumed that what had happened in Wuhan and in other parts of the world would soon become Italy’s reality as well.

On the same day the factory closed, Ferrari Chairman John Elkann and CEO Louis Camilleri agreed to launch a project to prepare the organization for reopening at the end of the national lockdown. The focus was NOT on determining how to regain lost production and productivity days but on how to keep Ferrari’s employees safe. Ferrari has always considered its 4,300 employees its most precious resource, even more then its heritage or brand.

The company developed their “Back on Track” program that was aimed at allowing workers to be as safe as possible when they return to work. Ferrari outlined the key actions to safeguard the health of employees and restart production, focusing on core activities, employee care, and stakeholder value. The company hopes that their programs would inspire other businesses as well. 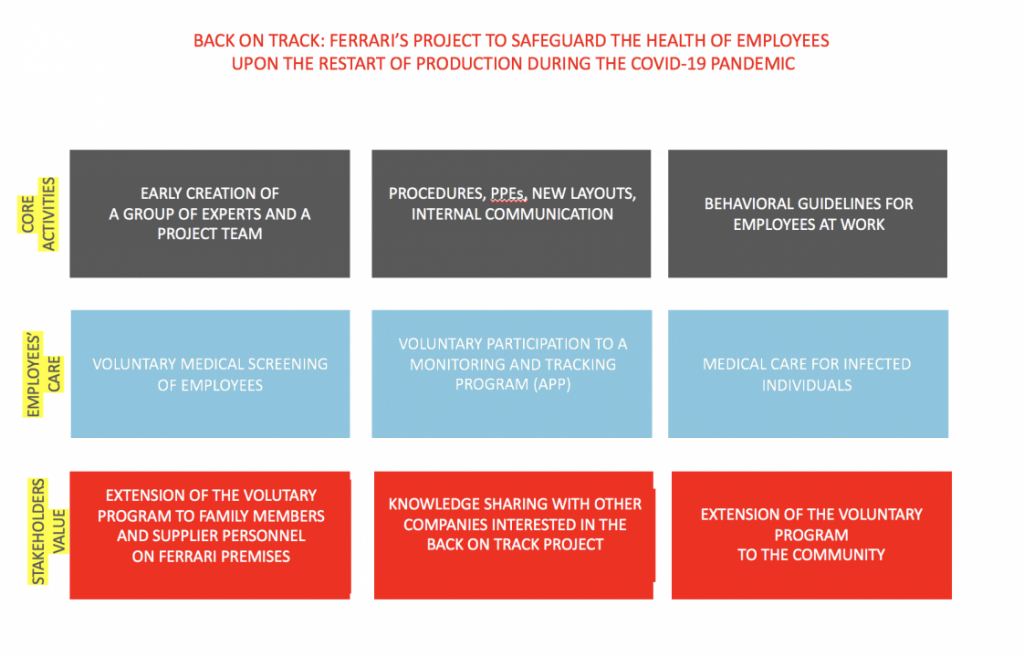 Establish a task force that includes outside experts. On March 16, when the factory closed, Elkann put together a team of top scientists to provide recommendations and security standards that the Project Delivery Team—a task force headed by Antoniazzi—translated into an executive action plan. This task force stayed in close contact with local health authorities in the weeks that followed to ensure regular information exchanges with health officials. “This external support created a significant number of synergies and allowed us to make fast decisions”, said Andrea Girotti, Ferrari’s Head of Employees Relations. “When challenges involve competencies we do not have, seeking out qualified experts for advice is critical to assure that we make not only fast decisions, but good ones.”

In times of crisis, leaders rely on task forces to brainstorm what is needed to overcome challenges. But leaders often don’t give enough thought to how well team members can be expected to interact when doing their important work under pressure. Power struggles and heated conflicts often take the place of a fully functioning team.

To avoid these pitfalls, Ferrari kept the Back on Track task force small — just six people — and assured that there would be the right chemistry among them. Members were chosen based on the competencies required at the time. From the start, competencies in human resources, safety, and protection were deemed critical for the task force. As a result, the team includes, besides Antoniazzi and Girotti, the company doctor (who has worked with Ferrari for many years), the Head of General Services and Asset Protection, the Safety and Prevention Manager and a communication manager. From the start, the task force’s goal was clear – bringing people back to work safely.

“Our regular meetings were full of debates over decisions we could make and actions we could take”, Antoniazzi narrated. “While disagreement was par for the course, expressing different points of views was always intended to improve our decisions rather than as an opportunity for one member of the task force to win an argument.” From the start, Antoniazzi was also clear that the task force’s membership would need to be fluid over time to remain agile. “We knew needs would change over time, and we would need to adapt as a team. For instance, as we got closer to the roll-out of the program, competence in communication became key. So, a Ferrari employee with that expertise joined the team, replacing a member whose competence was no longer as relevant.”

This chart provides a timeline of company initiatives undertaken by the automaker to return to productivity, from Jan 18, 2020 to June 1, 2020: 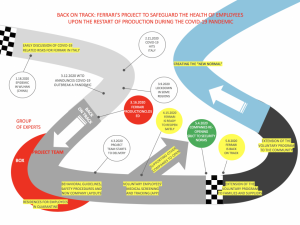 Create and communicate rules for conduct. The Back on Track program includes full compliance with national and regional regulations, including the strengthening of some measures to better fit the company’s work environment. These mandatory rules for conduct inside the company have been collected in a booklet that has been distributed to all employees at the company. They include entrance signage, norms for managers and suppliers, logistics for different sites, the use of company-provided masks, hygiene and health procedures, rules for travel, and contact numbers. In addition, Ferrari has created video tutorials to further assist in the educational process.

New measures include thermal scanners for taking temperatures and shoe-sanitizing carpets at the entrance, separate entries and exits for locker rooms so that people are not crossing paths or running into each other, stricter limits on the number of people allowed in closed areas, Corona virus testing, and a new layout for the canteen to support social distancing. Ferrari is also planning on purchasing specific machinery in order to produce masks in house.

Assure the safety of employees and their families. To help reduce employees’ worries about threats to their health and the health of their loved ones, the Back on Track program includes voluntary blood tests for both Ferrari employees and their family members to screen for recent Corona virus infections and antibodies that should guarantee immunity. “Every time we meet as a task force, we keep a long-term perspective. If vaccines aren’t available until Spring 2021, we asked ourselves, ‘How do we assure we create safe working conditions for our employees until then?’ This long-term thinking has helped us make decisions that clearly signal to employees that we truly care about their well-being”, Antoniazzi explained.

Employees who test positive for the Corona virus are offered a molecular test (polymerase chain reaction, or PCR) for further verification. The company also plans to offer highly reliable self-administered rapid tests. Recognizing the anxiety and stress the crisis has put on people, Ferrari has also given employees access to free confidential psychological support.

Those who test positive for coronavirus are sent to the Ferrari medical team to discuss different treatment options. Ferrari has prepared apartments where those who are not seriously ill can stay at no charge to protect their families from infection. Real-time diagnosis tools and 24-hour medical assistance are available to these personnel. “If a person who is ill were to start having issues breathing issues, we could help provide the necessary health supplies like oximeter, medicines and oxygen in the most severe cases”, Girotti explained. The company has created an app to monitor each individual’s health daily and track their contact with others who could be infected. 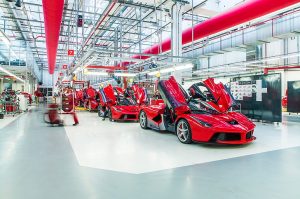 Embrace social distancing. Many leaders are having difficulty imagining how to enforce social distancing in their workplaces once they reopen. Ferrari started from a good position: Its factory, which produces 47 cars a day, has 30 workstations with two people already working more than six feet apart from one another in each. The task force focused its attention on modifying common areas, such as the canteen, break rooms, and locker rooms where people change clothes for work. For instance, seating in the canteen has been reduced from 800 to 600. Large tables have been replaced with small cubicles surrounded by plexiglass that seat just one person, and proper cleaning procedure will be carried out after each worker has finished eating.

“Changing people’s habits is hard”, opined Antoniazzi. “So, we are introducing not only architectural changes but also reminders through signs and also speakers. If you were to walk the factory right now, you’d hear a voice from speakers about every five minutes reminding you to wash your hands.” As leaders think about measures to impose social distancing, they’ll also need to think about the common routines we all tend to fall back to in our work, such as having a coffee together at a break, and how to best help people avoid them if they work against staying safe.

Focus on all stakeholders, not only employees. At a time when businesses are hurting financially, many leaders are focused locally on cost-cutting — including layoffs and furloughs. By contrast, Ferrari has been thinking about its stakeholders more broadly. Ferrari’s suppliers can access the same voluntary Corona virus screening offered to employees and their families. In addition, all the protocols Ferrari is using internally are shared with its suppliers so that they can use the same procedures in their own companies, and it is distributing masks not just to employees but also to suppliers and residents of the three towns—Maranello, Fiorano, and Formigine—where most of the company’s employees live.

Since 1978, Business Roundtable has regularly issued core principles of corporate governance. In 2019, revisions of these principles redefined the purpose of a firm: to create benefits to all stakeholders, customers, employees, suppliers, communities, and shareholders. Such statements create hope for better-managed organizations. But it is through concrete actions, such as those being taken by Ferrari, that hope becomes reality. 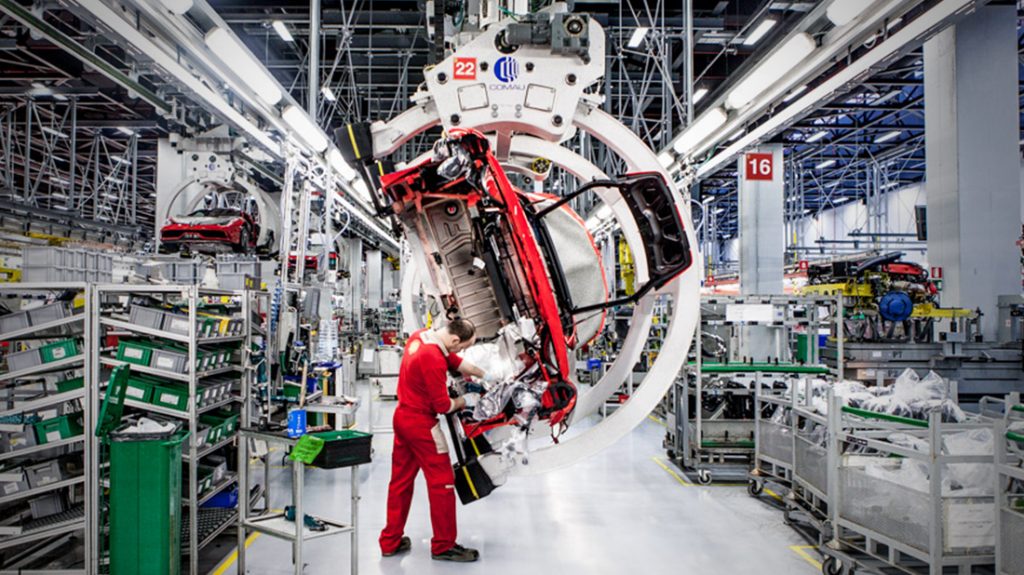 Lead the way by sharing best practices. Ferrari is making its Back on Track plan – including the ideas behind it and the various protocols the company has developed – available to all interested companies. Many leading Italian firms have already reached out to understand how they can benefit from Ferrari’s approach. During a time of crisis, we all benefit when organizations put aside their competitive instincts and collaborate.

Leaders at Ferrari also intend to make their lessons and best practices available to the local government of the Emilia-Romagna Region. By making its practices open source, Ferrari conveys that it considers its stakeholders to include not only employees, their families, and suppliers, but also the business and social community at large. “This project’s success means seeing months from now that the type of behaviors we are asking for are used not only in the factory, but outside – in Maranello, in towns surrounding Maranello, and in other companies as well”, Antoniazzi said.

A way forward for every organization. Many leaders talk about how much they care about their people, but there’s no better time than a crisis for leaders to show that they truly mean what they say. By taking the steps like what Ferrari has taken, every company can accelerate its return to a New Normal and bring people back to work safely, steering through crisis like this with imagination and confidence rather than fear. 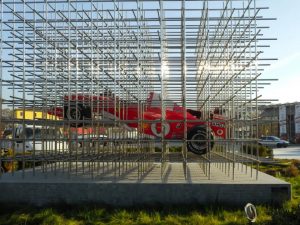