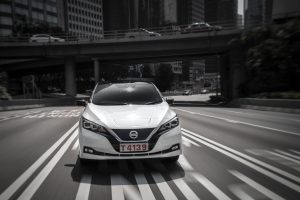 On a relatively cold Friday afternoon in March, I found myself driving on the “wrong” side of the road in a 2019 Nissan Leaf hatchback, one of the earliest mainstream electric cars from an established and major automaker. I was in Hong Kong for the second round of Nissan Futures thought leadership discussions in the Asia and Oceania region, and one of the highlights of the event was a drive around Hong Kong in Nissan’s recently updated electric vehicle (EV). 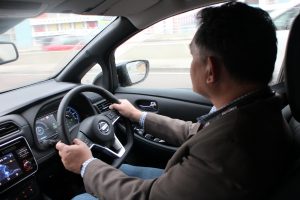 Yours truly driving the Nissan Leaf around Hong Kong.

Nissan Motor Co., Ltd. announced that it has sold around 400,000 Leaf EVs since it debuted in 2011. The Nissan Leaf was redesigned in 2018 and now has a driving range of 240 kilometers on a single charge. It is powered by a standard 147-horsepower electric motor and has a 40-kilowatt-hour (kWh) lithium-ion battery pack that can be recharged in about eight hours at 240 volts. There’s a new longer-range 2019 Nissan Leaf Plus with a bigger 60kWh battery pack, a longer 360-kilometer range, and a more powerful 215hp electric motor but we only got to drive the standard right-hand-drive Leaf around the Kowloon Bay area. 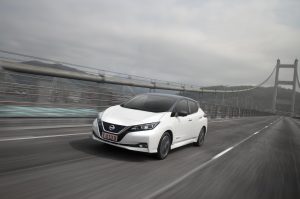 When we got into our Nissan Leaf at the driveway of the Kerry Hotel in Hom Hung, my driving partner, Kevin Bruce Francisco, and I thought that the engine was still off. Only after Kevin pressed the Start button that we realized the EV was just waiting for us to shift into gear and go down the road. Since we’re both used to driving vehicles with internal combustion engines (ICE), we were looking for the normal engine vibration and exhaust sound, but as a fully electric vehicle, the Leaf does not have any of these. 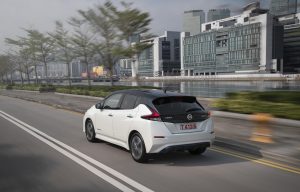 What it has is a surprising amount of torque – 280 Newton-meters to be exact. With only 1,481 kilograms of weight and three passengers to lug around, the Nissan Leaf accelerates with an alacrity and ferocity unexpected of a 5-door family hatchback. Since the EV is propelled by an electric motor, maximum torque can be achieved almost immediately. We reached the posted speed limit in Hong Kong’s highways and tunnels without even thinking about it. We often triggered the Lane Departure Warning because we were trying to see if we can overtake slower vehicles in front of us. We came to the conclusion that the Nissan Leaf is a “sleeper hot hatch”, which is a powerful hatchback disguised as a sedate family sedan. Its acceleration might even surprise some drivers of performance cars during an impromptu drag race from stoplight to stoplight. 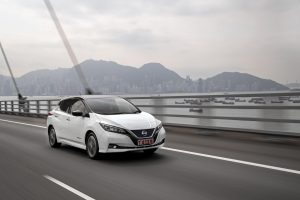 Unlike hybrid cars which have to carry the additional weight of a gasoline- or diesel-powered engine and fuel tank in addition to the electric motor and the battery, the Nissan Leaf is purely electric and only carries the necessary equipment. It feels light, nimble and agile. Its single-speed automatic transmission is simple to operate, and it offers great performance in normal driving mode. The brakes perform exceptionally well and the cockpit is an example of fine ergonomics. Since it was designed as a family hatchback, the ride is a bit firm and tall adults might find the rear seats a bit uncomfortable. The battery array uses some interior space but it’s well covered. 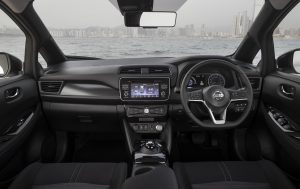 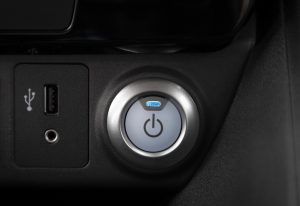 The power is on but there’s no sound or vibration. 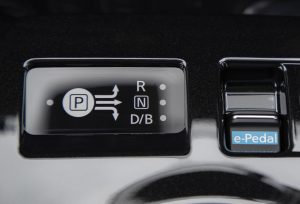 Single-speed automatic transmits 280Nm of torque from the electric motor. 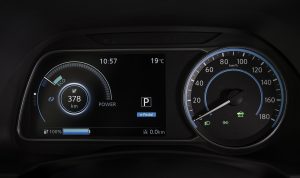 Ready to go with a fully-charged battery.

As Nissan’s first and best-selling EV, the Leaf is chockfull of safety features such as standard Traction Control, Automatic Emergency Braking, the aforementioned Lane Departure Warning, Blind Spot Warning, Rear Cross-Traffic Alert, and Rear Door Alert, which activates a warning and honks the horn as reminders to check the backseat. We were told that there’s a 360-degree camera feature but we may have missed it while we were savoring the drive. 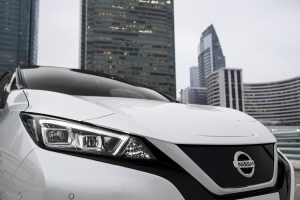 The front of the Nissan Leaf is handsome and modern. 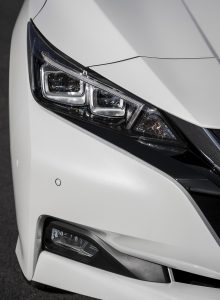 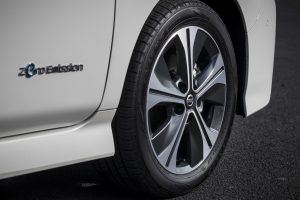 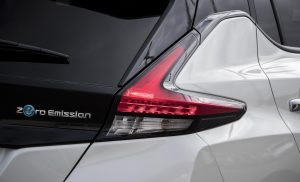 At one point along the mountain roads around Hong Kong, we were asked to switch to Eco Mode so we can test the economy of the Leaf. The road marshal recorded our battery range at 89% when we started our economy run. With the rains drizzling down on our windshield, which was beginning to fog up, we decided that we’d rather be safe and comfortable so we turned on the airconditioner. Of course, this will consume power and help drain the battery as will the 7-inch touch screen monitor that is hooked up to our navigation system. “Houston, we have a problem”, I though in jest while recalling the movie Apollo 13. “We won’t be conserving battery juice during our economy run.” 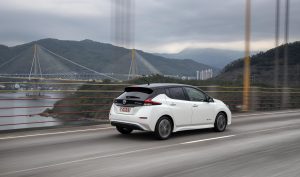 With an estimated range of 240 kilometers, we weren’t worried that our Leaf will leave us stranded in the middle of the Hong Kong rush hour traffic, which actually moves unlike Metro Manila rush hour traffic. At times, we just simply lifted our right foot off the accelerator pedal and the e-Pedal initiated gradual braking by turning the wheel motor into a generator to charge the battery. Most of the time, we drove the Leaf as we would any other vehicle, to the point that we almost forgot that we were in an EV. When we got back to the hotel, our battery range dropped to 80%, which meant that we only consumed 9% of the charge while we drove up and down mountain passes, breezed through highways and tunnels, and crawled through the regular HK traffic. Needless to say, we were impressed with this electric vehicle’s performance. 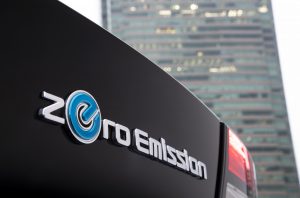 Coming to the Philippines

We later learned that the Nissan Leaf has an optional quick-charge port that can charge the standard 40kWh battery to 80 percent of its capacity in as little as 40 minutes at a fast-charging station, which can be located by the NissanConnect system in participating countries. A standard plug-in charger comes with the Leaf so it can be charged from an outlet while it’s parked at your garage. In the not-so-distant future, Nissan forecasts that its e-Power system, where the Leaf can power a home or office with its battery, will make every EV an energy asset in addition to being a financial asset. 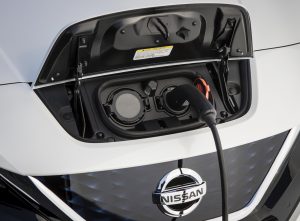 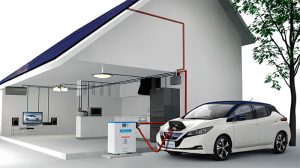 The Nissan Leaf can power homes and offices to become future energy assets.

We realize that driving an electric car requires a commitment to managing the battery range and living with its limitations, especially when there are few or no fast-charging infrastructures to support it as of the moment. What surprised us most is when Yutaka Sanada, the regional senior vice president for Nissan Asia & Oceania, announced that the Leaf is coming to the Philippines in 2020. During our round table discussions, Sanada-san said that they are currently studying the infrastructure in the country to support the future Leaf drivers. Perhaps, a fully electric vehicle is not a far-off dream. A clean electric future will soon be here! 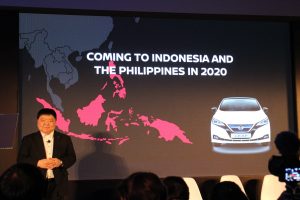 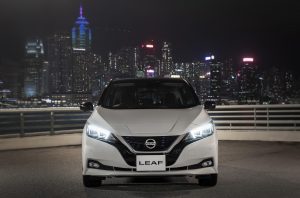