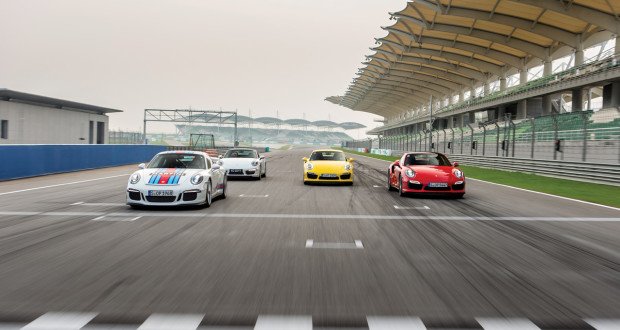 Beyond the Limit – Porsche Track Experience

Porsche’s company DNA has always been to take new routes and to question what was once cast in stone. Where others give up, that’s where their engineers begin. The all-new 911 Turbo S and 911 GT3 are testaments to engineering a tradition, a tradition of leaving the beaten path.

Born in 1974, the 911 Turbo didn’t exactly enter the sports car world at the most opportune time. The oil crisis dictated what car makers could and couldn’t do. Porsche charted a different path: maximizing available resources at the time, they added power without compromising efficiency. The latest 911 Turbo S is no different. Ninety percent of its components have been re-engineered to maximize performance. Meanwhile, the 911 GT3 is built to be the ultimate track car for the open road. It’s where the limit signals not the end, but the beginning of innovation. All in all, the 911 GT3 is a precision instrument where you can push your own boundaries. It’s a manageable sports car that feels at home on the racetrack, yet can be taken to sporty destinations.

Both the 911 Turbo S and the 911 GT3 are objects of beauty and desire, a timeless design that becomes an icon. In its form, proportions, and lines, they are clearly Porsche. Yet, everything has been tweaked to improve stability. The 911 Turbo S features an active rear wing and together with the adaptive spoiler at the front, it forms the Porsche Adaptive Aerodynamics system. On the other hand, the 911 GT3’s design details are all functional in the pursuit of performance. The revised front-end improves the aerodynamics. Apart from the customary luggage compartment air outlet, the 911 GT3 has a wider front spoiler and larger cooling air openings. However, it’s the fixed rear wing that easily distinguishes a 911 GT3 from a 911.

The interior of both cars make one message clear: it’s designed to unite man and machine as one. The interior is precise, not fanciful; minimalist, not kitsch. True to Porsche form, the five circular instruments lead the way. The rev counter is in the middle while a 4.6-inch TFT color display on the right provides continuous stream of data from the on-board computer. The ascending center console places the gear selector within direct reach while the steering wheel is of the perfect size and thickness.

Strapping into the GT3 first, the motorsports heritage is apparent with the protruding half roll cage. The grippy Alcantara steering wheel falls nicely into hand. At first, the accelerator feels stiff, but a quick tap lurches it forward, an indication of its potency. After a couple of corners of taking it easy, it’s time to see what the 911 GT3 can do. Pushing through corners, the GT3 flies through them in a flurry of speed and precision. There’s tremendous confidence at the limit where the purity of the steering and the directness of the chassis dictates the direction of movement. It can and will slide at the absolute limit, but it’s easy to catch it.

Alternatively, the 911 Turbo S doesn’t feel as raw as the GT3. It’s more luxurious, and yet, still keeps the focus directly on the driver. Leather on the dashboard, door and side trims is standard while Alcantara is used as the headlining. The twin-turbo provides instantaneous power to make your heart skip a beat as the engine races towards the redline. At that instant, you think you’re going to miss the apex, you slam on the brakes. Turning the wheel instantly, the active all-wheel drive system takes over giving awe-inspiring grip. It feels direct as it enters the corner while still allowing you to kick the rear out, but only if you truly desire for it to do so.

Porsche, especially its storied cars like the 911 Turbo S and 911 GT3, are born from a winning heritage on the racetrack. And yet, Ferry Porsche’s dream goes beyond that. He believes a car ought to be just as capable of winning as it’s suited for everyday use. What matters for Porsche even more than a place in the winner’s circle is how much experience is gained, as well as ideas and visions that the race inspires.