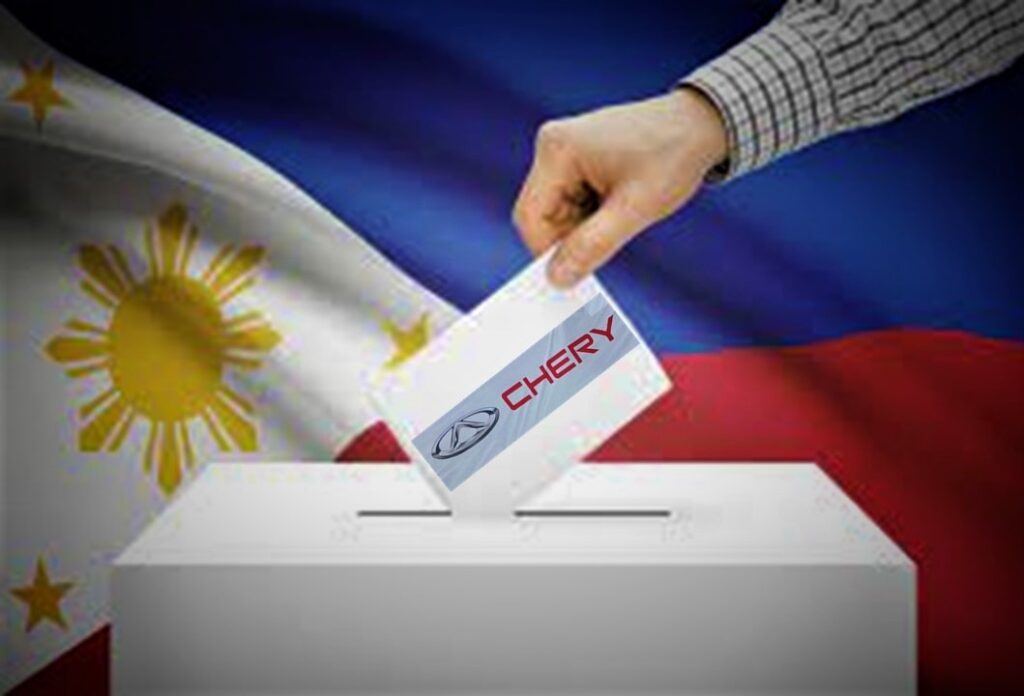 Despite the number of candidates in the recent national elections, political analysts believe that there were only two actual choices for the voters – populists and revisionists. The populists wanted to continue the programs of the current administration while the revisionists wanted to implement drastic changes. An advertising executive opined that the revisionists suffered a disconnect with the voters because the outgoing administration had a high approval rating, which made the populists more popular since majority of the voters wanted continuity. The post-election tally showed one of the populists winning by a landslide, or to quote a joke from a former President, “by a landscape”. 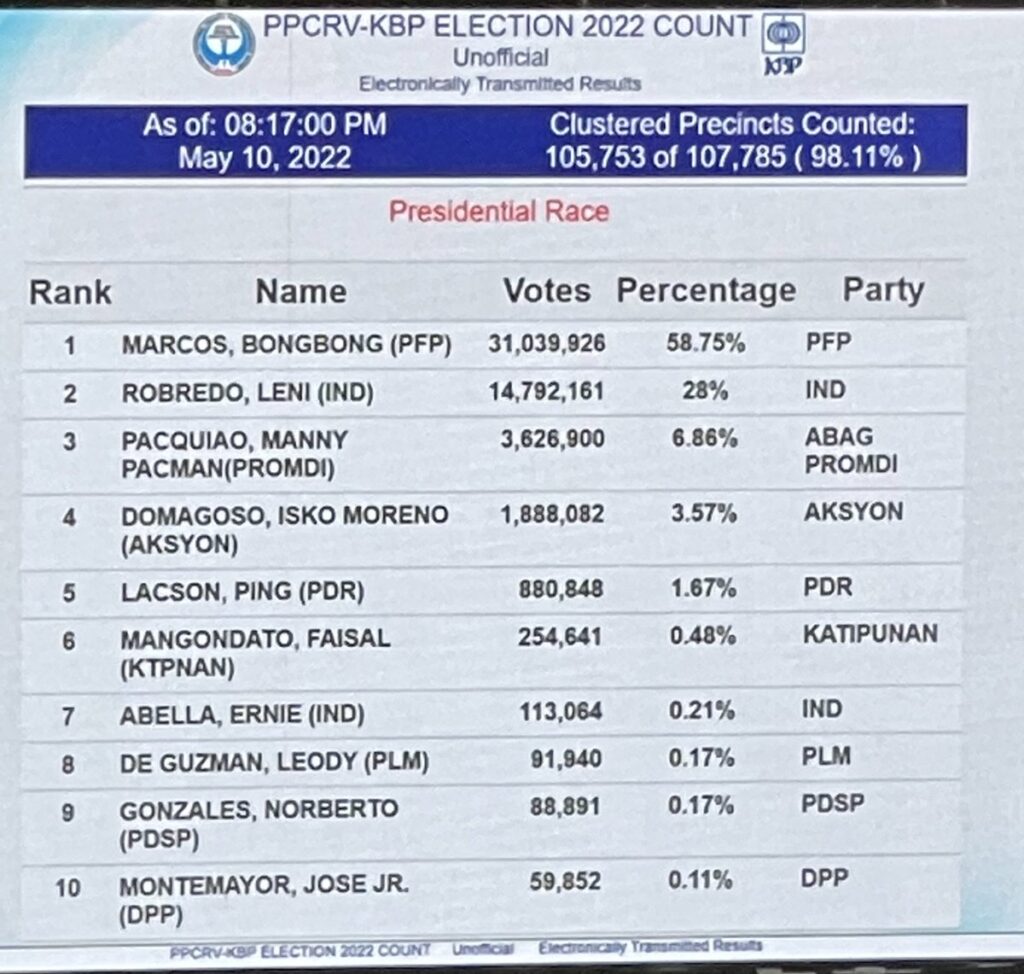 Kidding aside, the landscape in the 3-row sport utility vehicle (SUV) market is quite similar to the political scenario. Buyers are faced with a multitude of choices between the “populists” or the established brands and their popular models – Ford Everest, Honda CR-V, Mitsubishi Montero Sport, Nissan Terra and Toyota Fortuner – and the “revisionists” or the Chinese car makers – Chery, Foton, Geely and MG. Like the results of the recent elections, buyers have cast their votes in favor of the “populist” Toyota Fortuner, which has a commanding lead over its nearest rival. However, one of the “revisionists”, Chery Auto Philippines, is aiming to change all that with the all-new 2022 Chery Tiggo 8 Pro 1.6T. 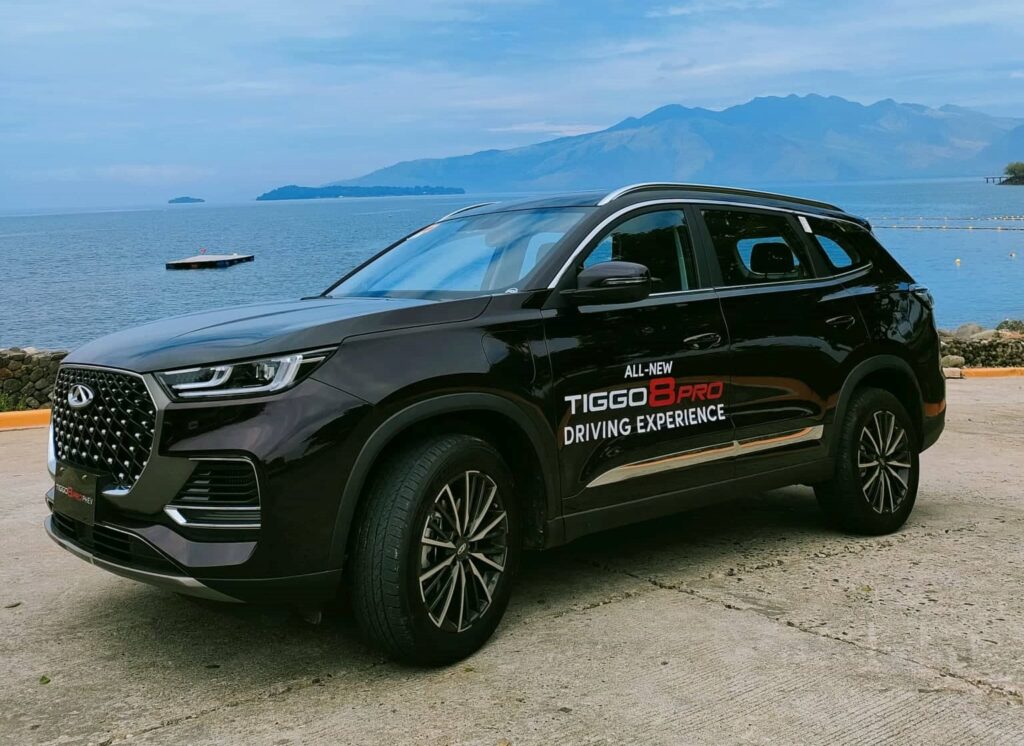 Not to Be Compared to the Okavango

To announce their intention of challenging the “populist” SUV brands, Chery Auto Philippines executives led by United Asia Automotive Group, Inc. (UAAGI) president Errol Duenas and VP for Sales and Marketing Luigi Ignacio invited several members of the motoring media to experience the Tiggo 8 Pro 1.6T on a drive from the ACEA Beach Resort in Subic, Olongapo, Zambales to the National Shrine of Valor in Mount Samat, Pilar, Bataan. For added excitement (and for the media participant’s evaluation), they brought along the Tiggo 8 Pro 2.0T and a couple of Tiggo 8 Pro PHEV (plug-in hybrid electric vehicle) variants for good measure. 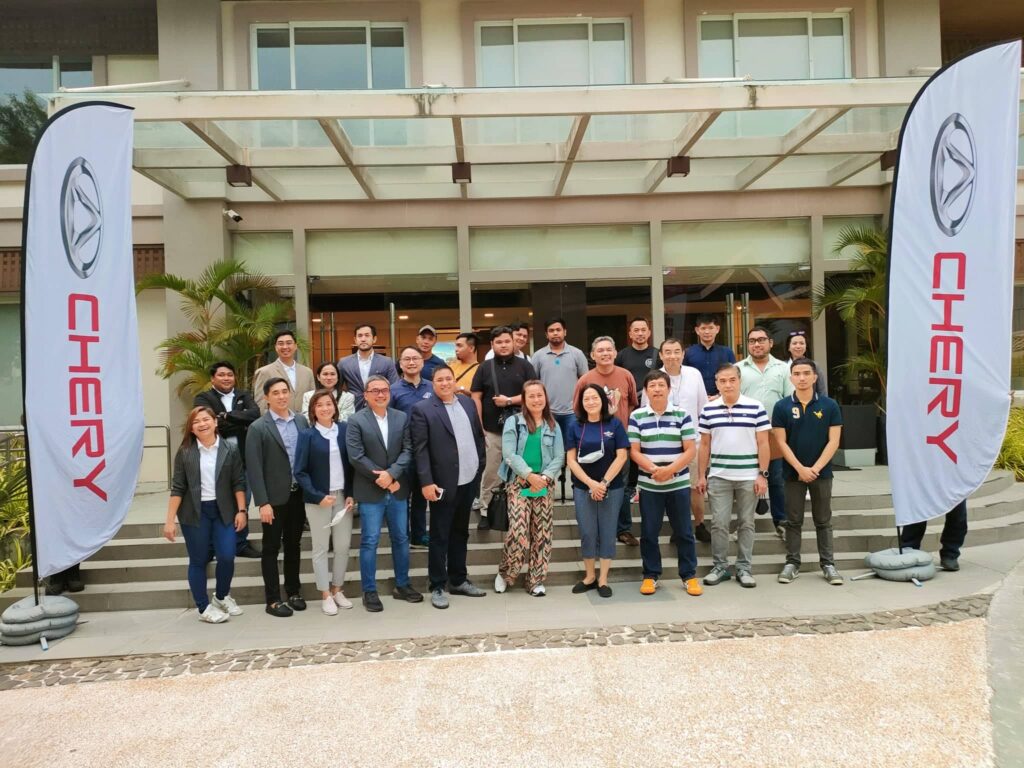 During the pre-drive briefing, Luigi proudly claimed that the all-new Tiggo 8 Pro 1.6T is fully-equipped to go toe-to-toe with the popular models such as the Fortuner, Montero Sport and CR-V. He emphasized that it should not be compared to other Chinese SUVs such as the Geely Okavango simply because the Tiggo was built to higher standards and higher specifications. He also emphasized that the price of the Tiggo 8 Pro 1.6T is highly competitive compared to the Japanese brands while featuring advanced technology that enhances safety, driving experience and passenger comfort. 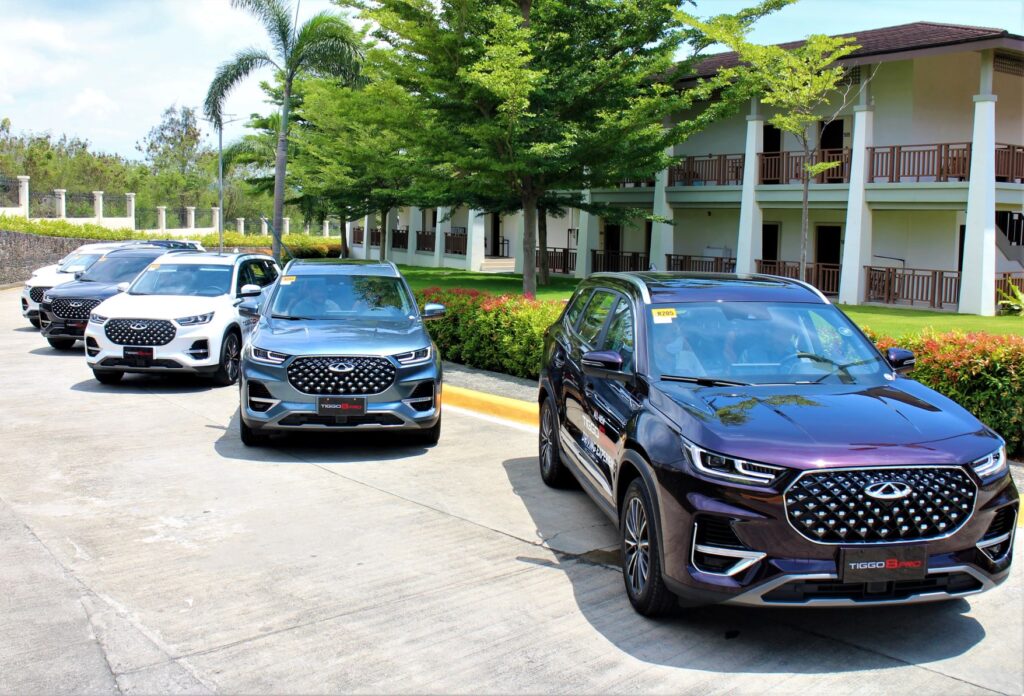 On a warm and sunny Wednesday afternoon, my wife Shawie and I got into a white Tiggo 8 Pro 2.0T along with Bess Zamora of AAP Quarterly Magazine and Lito Landicho, the head of UAAGI Aftersales Service Group to join the convoy of eight other Tiggo 8 Pros. The first thing we noticed once inside the Chery SUV was how quiet it was. Lito explained that all the Tiggo 8 Pro models feature improved NVH (Noise, Vibration and Harshness) insulation in addition to its rigid body structure and improved suspension system. The ride feels so comfortable that it feels as if you’re inside a more expensive luxury SUV (think Range Rover), especially with the double-stitched soft leather seats, soft-touch dashboard, cool climate control system, and sweet-sounding 8-speaker infotainment system. 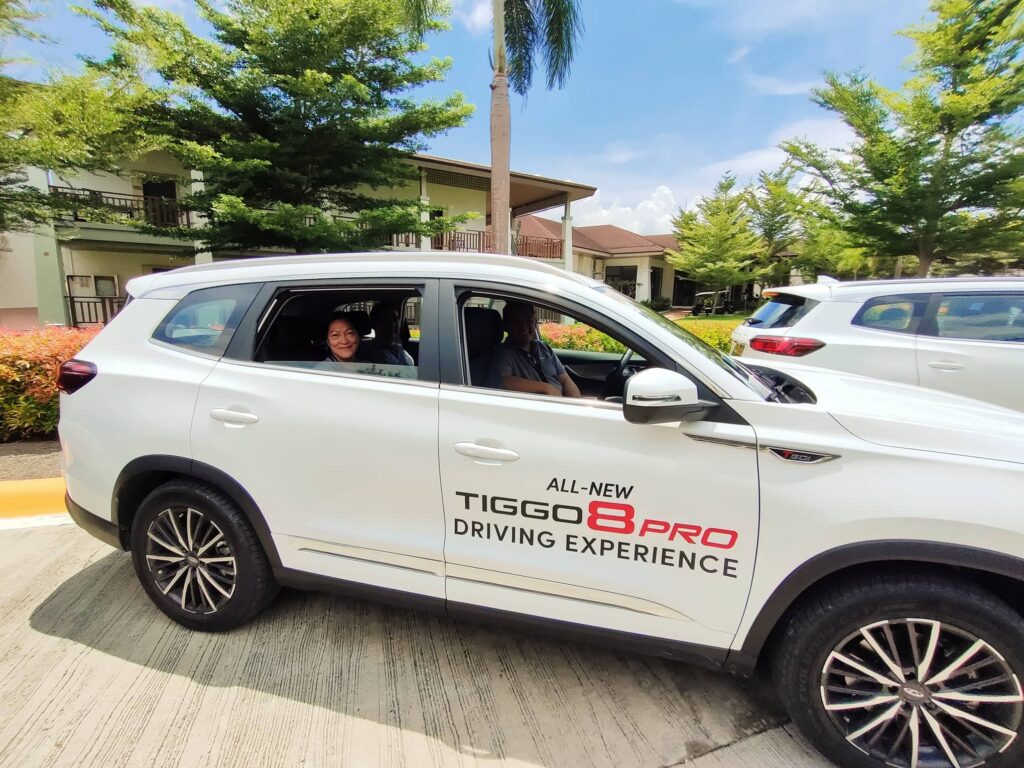 During a restroom break along a lonely stretch of highway in Bataan, we were left behind and we had to drive quite fast along the zigzagging mountain road to catch up with the convoy. Our Tiggo 8 Pro 2.0T and its all-wheel drive system (AWD) made easy work of the zigzags and zoomed past other slower vehicles without disturbing the tranquility inside. Shawie, Bess and Lito continued with their animated conversation and didn’t mind the speed around the curves because our Chery handled like a dream. I was so impressed with the Tiggo 8 Pro’s ride and handling that I began to doubt whether I could to do the same maneuvers with the its targeted competitors. I guess Shawie and Bess were likewise impressed with the ride that they didn’t want to take the wheel and elected to make me their designated chauffeur-for-the-day instead. 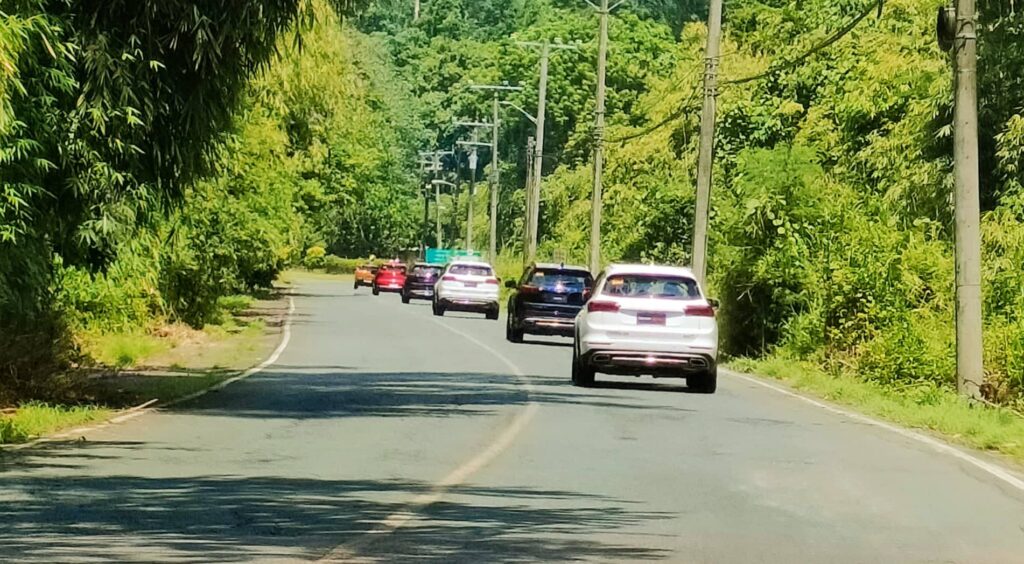 At the National Shrine of Valor

Driving up towards the National Shrine of Valor, which is located 555 meters above sea level near the summit of Mount Samat, we noticed how easily our turbocharged 2.0-liter AWD Chery negotiated the steep inclines and how controllable it was on the tight turns. We also noticed how the turbocharged 1.6-liter front-wheel drive (FWD) Tiggo 8 Pro 1.6T driven by some of our media colleagues were likewise effortless in conquering the steep grades going up to the memorial. Both the 1.6-liter and 2.0-liter variants are equipped with 7-speed dual clutch automatic transmissions (DCT) and it would seem that with the speed and maneuverability that our convoy had in going up to the summit, the performance of all the Tiggo 8 Pro variants were nearly similar – give or take a few horsepower and torque differences. 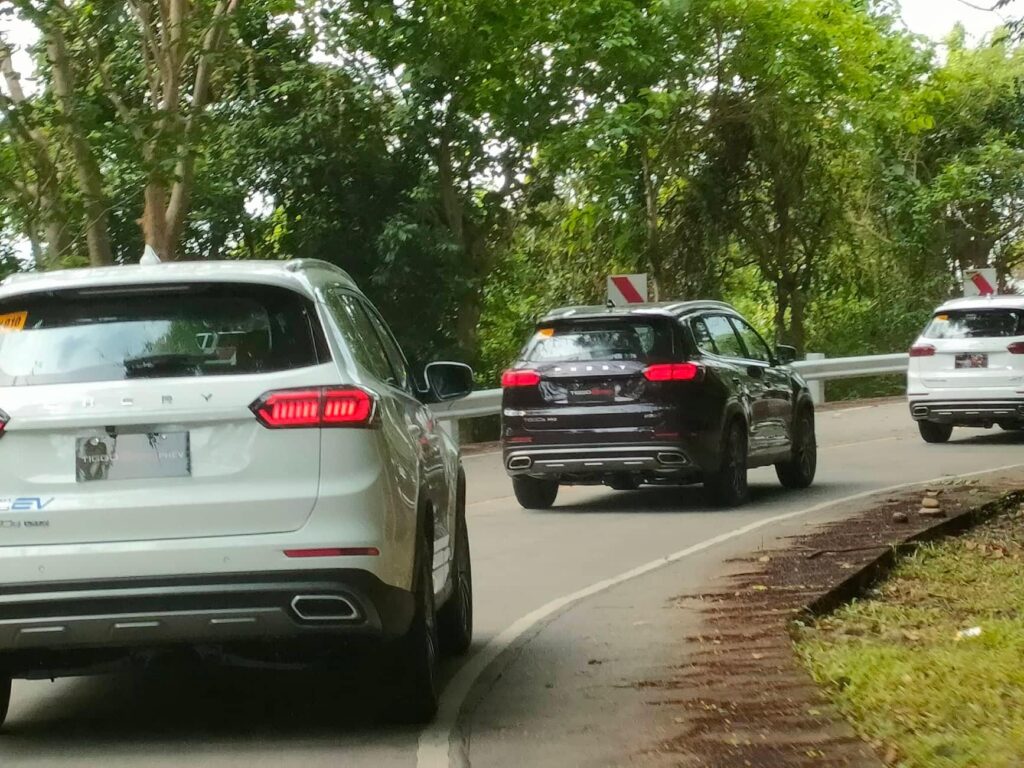 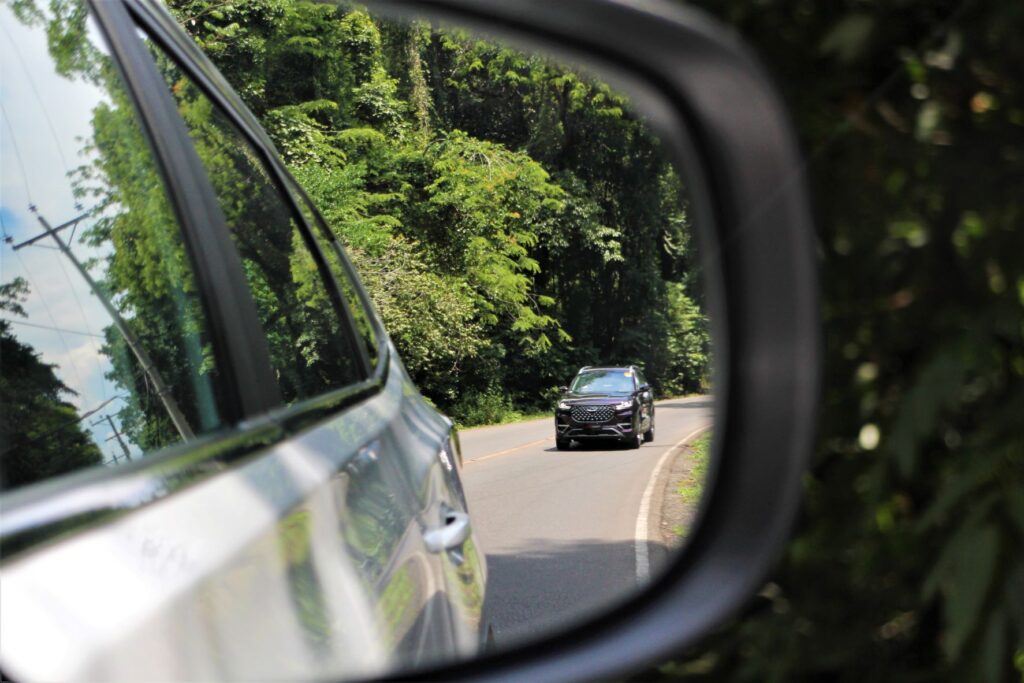 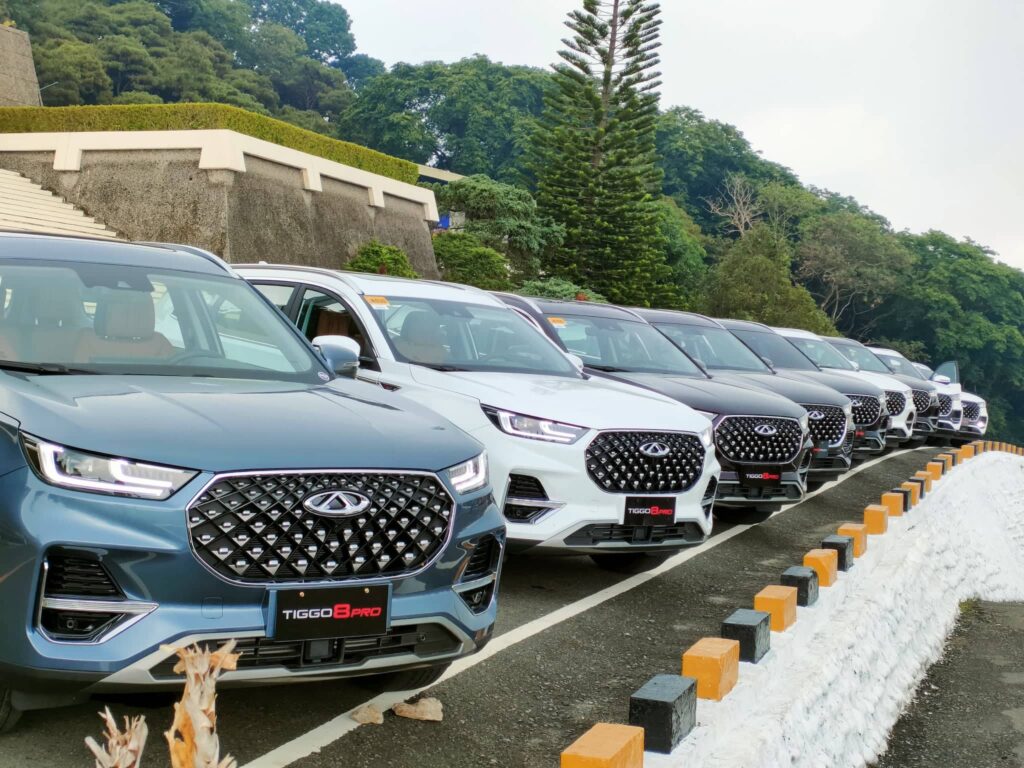 Once we got to the shrine, we parked our Tiggo 8 Pro alongside the eight other units at the inclined road in front of the memorial. Dark clouds were approaching and we were given just a few minutes to take photos of our vehicles and to pose for a souvenir group photo. After the requisite photo sessions, some of our media colleagues switched vehicles so they can test the other Tiggo 8 Pro variants while we elected to stay with our 2.0-liter Chery. I guess Lito, Bess, Shawie and I were enjoying the ride, music and conversation inside it that we simply didn’t want to change anything. After all, what could be better than having delightful conversations with pleasant company in a very comfortable vehicle driven along a scenic road? 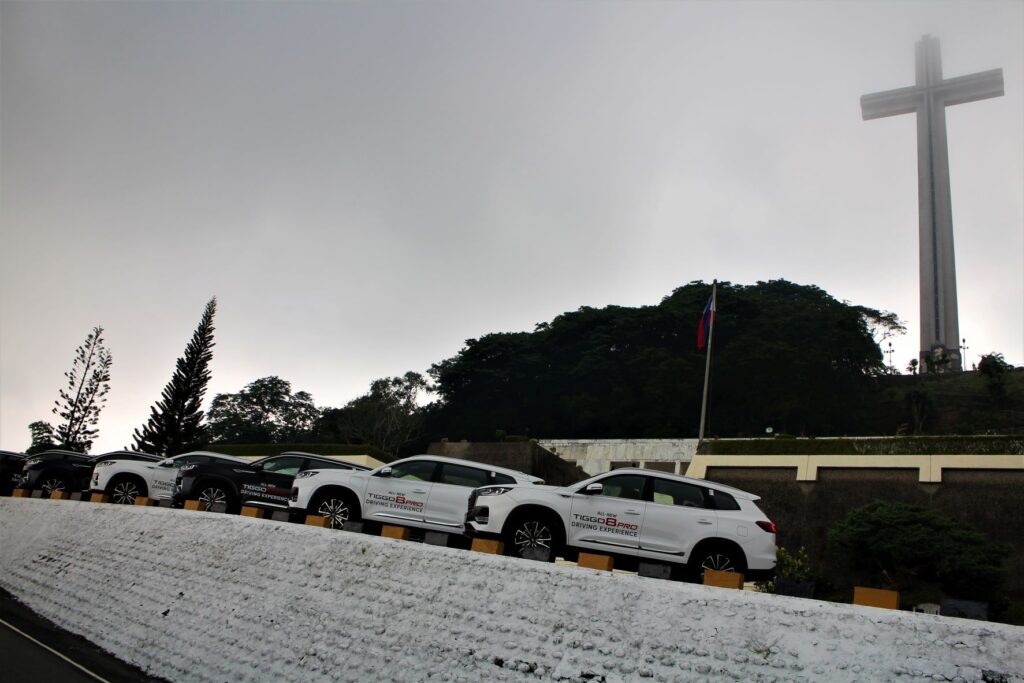 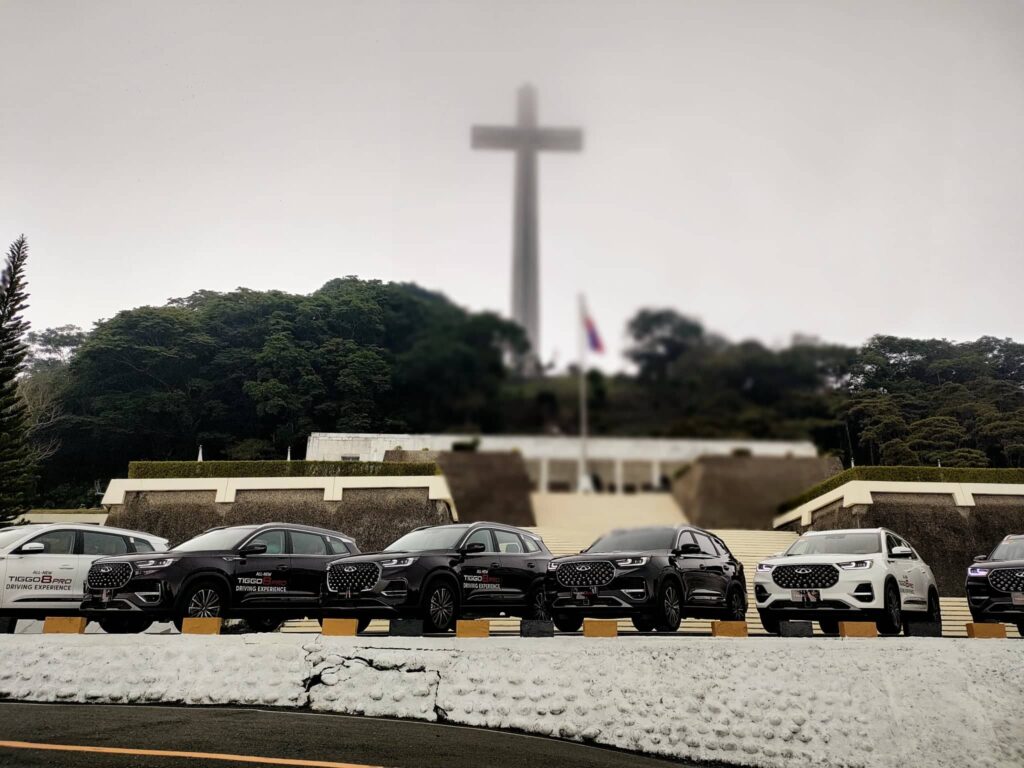 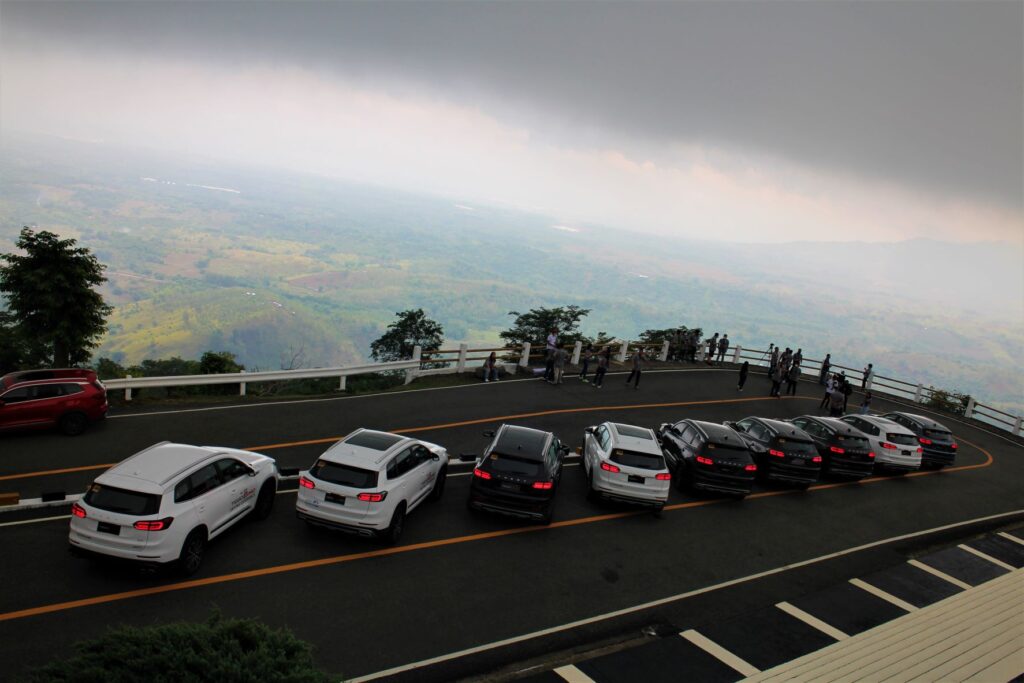 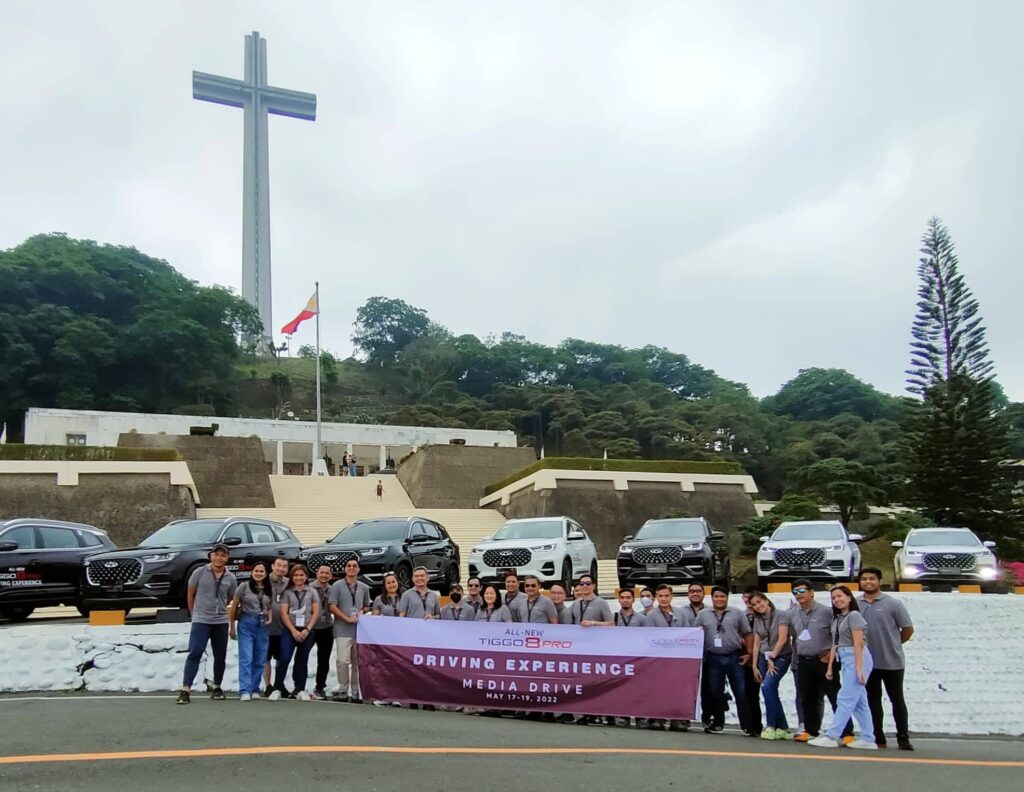 Back at ACEA Beach Resort Subic

Our drive going down Mount Samat and back to Subic was uneventful for the most part. There was some light rain but it didn’t hinder our convoy’s fast pace by one bit. All the electronic driver assistance and safety features – such as Anti-lock Brake System (ABS), Electronic Stability Program (ESP), Brake Assist System (BAS), Electronic Brake force Distribution (EBD), Hill Assist Control (HAC), Hill Descent Control (HDC), Traction Control System (TCS), Lane Departure Warning (LDW), Lane Keeping Assistance (LKA), Front Collison Warning (FCW), Traffic Sign Recognition (TSR) etc. – made sure that we arrived as fresh and relaxed as when we left a few hours earlier. We didn’t have the opportunity to test the other safety features such as the Intelligent High Beam Control (IHC), Adaptive Cruise Control (ACC), and Blind Spot Detection (BSD) but we’re confident that they are as effective as the other systems we tried. 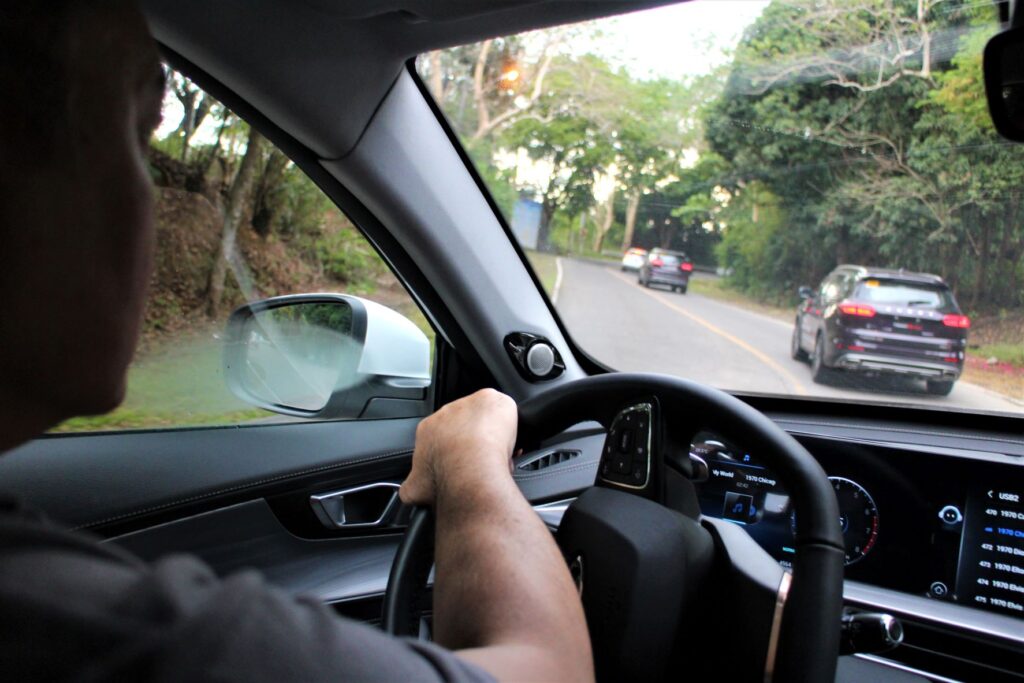 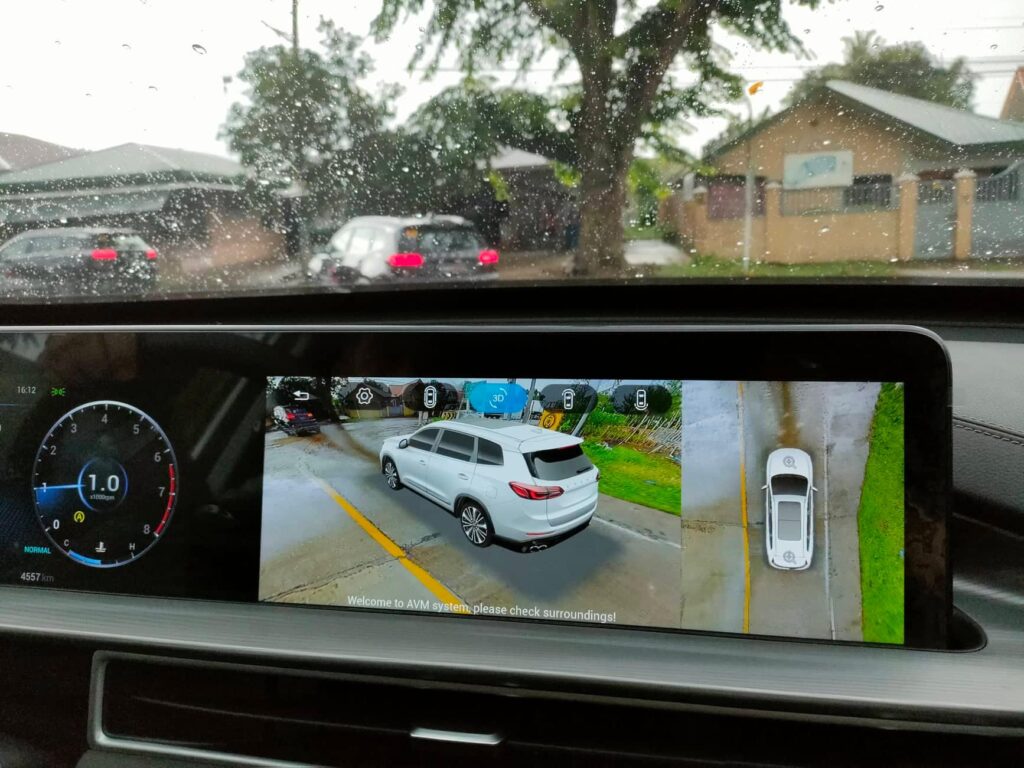 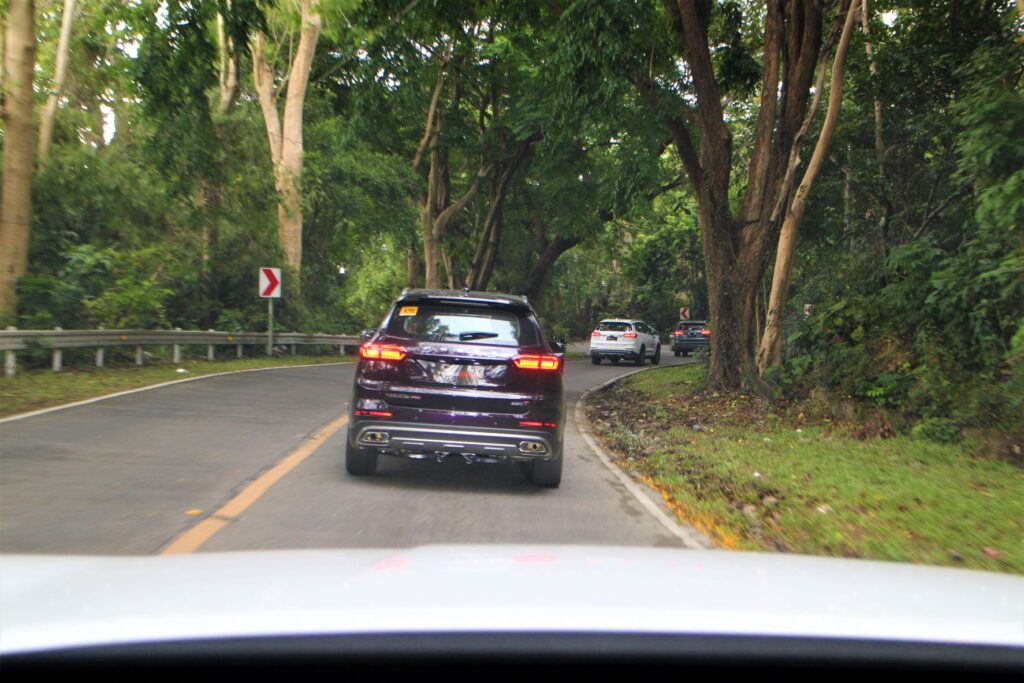 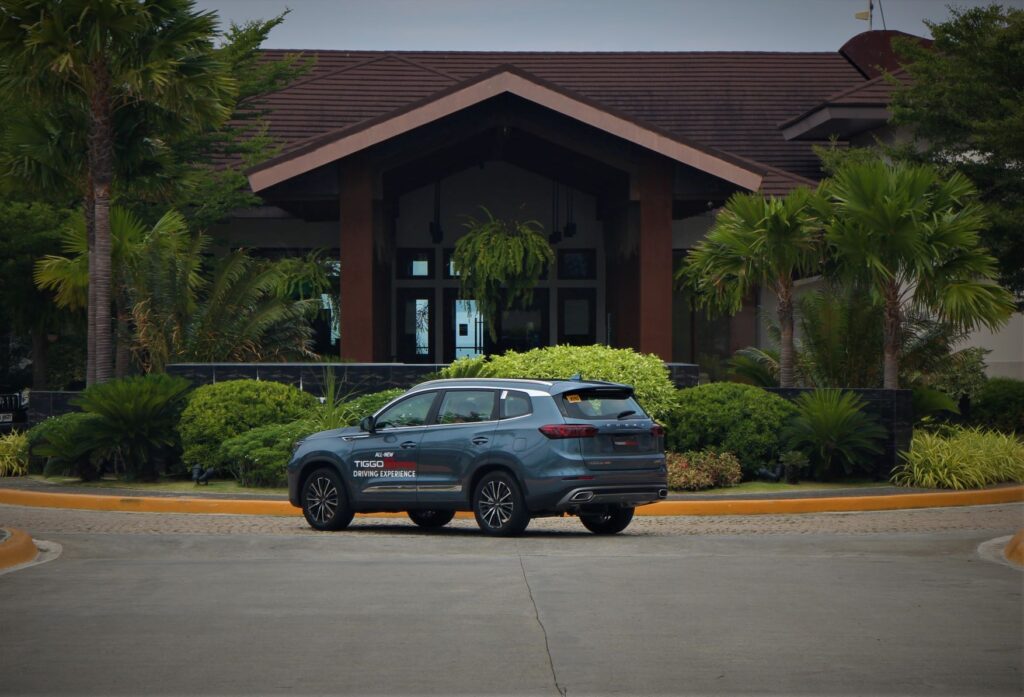 We capped off the evening with a fun dinner filled with good food, good friends, some singing, dancing and some prizes. Instead of swimming in the ocean and basking in the sun the next day, Shawie and I spent the morning test driving the other variants – the Tiggo 8 Pro 1.6T and the PHEV – and confirmed my earlier assumption that their performance is almost similar. In fact, I was surprised with the acceleration of the 195-horsepower turbocharged 1.6-liter FWD, which, with 290 Newton-meters of torque, has nearly the same ferocity off the line as the turbocharged 2.0-liter AWD. Of course, the kingpin of the lot is the Tiggo 8 Pro PHEV, which is also the mileage king among the trio, with its ability to travel more than 800 kilometers on one full tank (45 liters) of fuel. 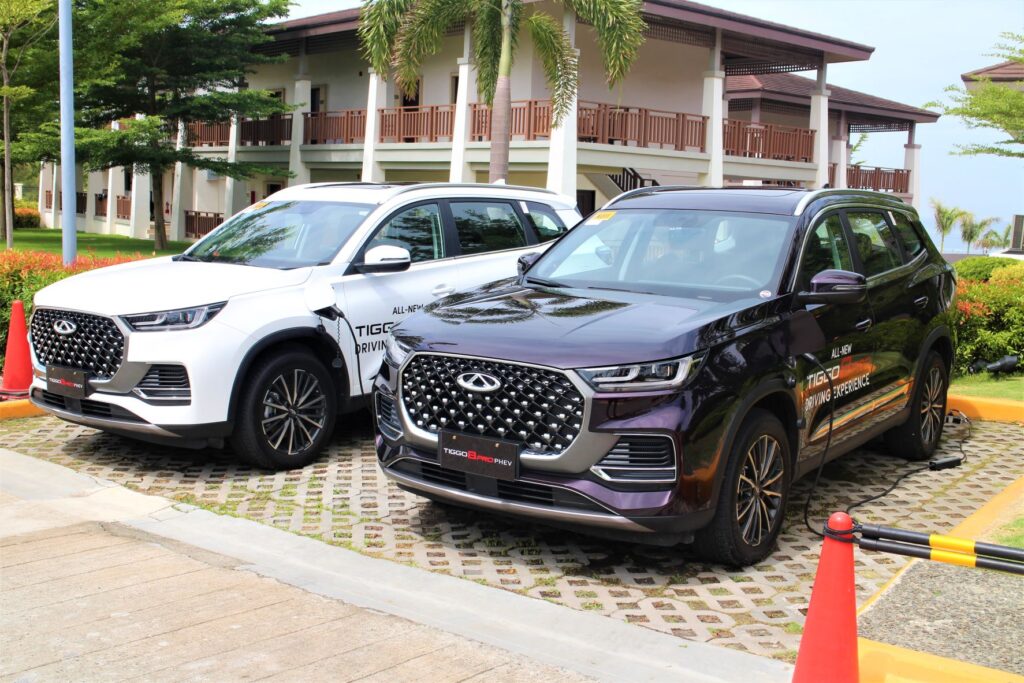 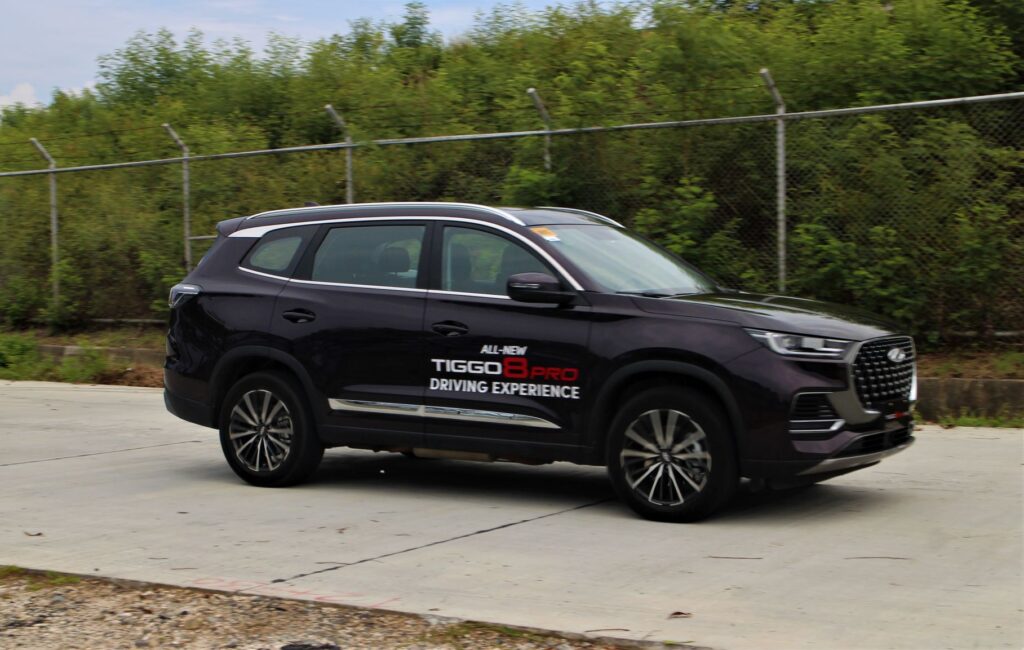 The New Seat of Power

After test driving all three variants, we realized that Luigi’s claim of the Tiggo 8 Pro’s capability to take on its popular SUV competitors was no empty boast. We also understood why their tagline for this new Chery SUV is “The New Seat of Power”. You really have to test drive one to see how Chery as a car brand has improved by leaps and bounds. However, because of the worldwide supply shortage of electronic chips, Chery Auto Philippines will initially focus on marketing the P1,645,000 Tiggo 8 Pro 1.6T and the P2,400,000 Tiggo 8 Pro PHEV since these are immediately available. The Tiggo 8 Pro 2.0T AWD will come much later. 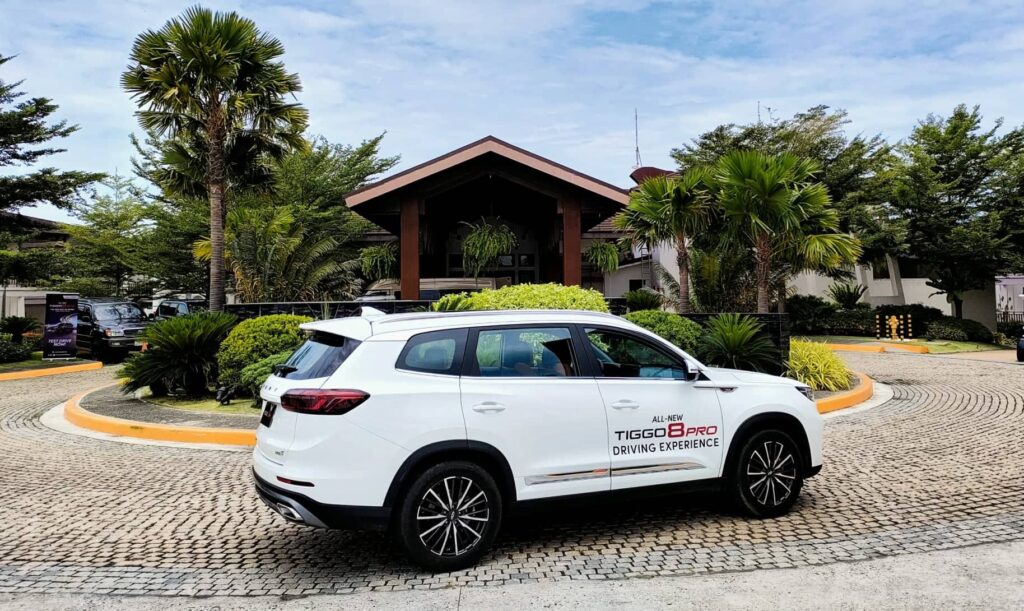 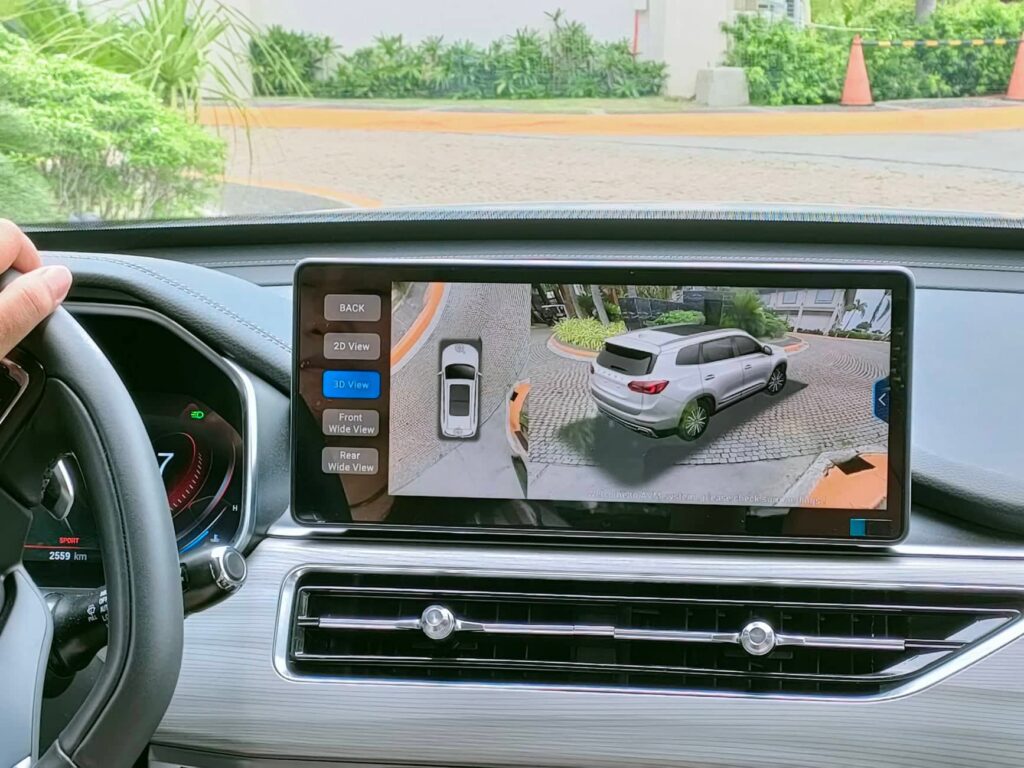 Driving home from Subic to our residence in Quezon City, Shawie and I found ourselves discussing the fine points of the Tiggo 8 Pro 1.6T aside from the fun we had during the entire Media Drive. We never thought that we would one day find ourselves considering a Chery as our next family car, especially with Chery’s Premium Preserv and unbeatable warranty package consisting of 7-year, 200,000-kilometer general and engine warranty (whichever comes first), free 3-year preventive maintenance service every 10,000 kilometers or once-a-year (which ever comes first), and 3-year road side assistance. Chery Auto Philippines must be extremely confident of the quality of their products to offer such an expansive warranty package. Perhaps it is high time to look away from the “populist” car brands and take a closer look at vehicles from this highly dynamic “revisionist”. 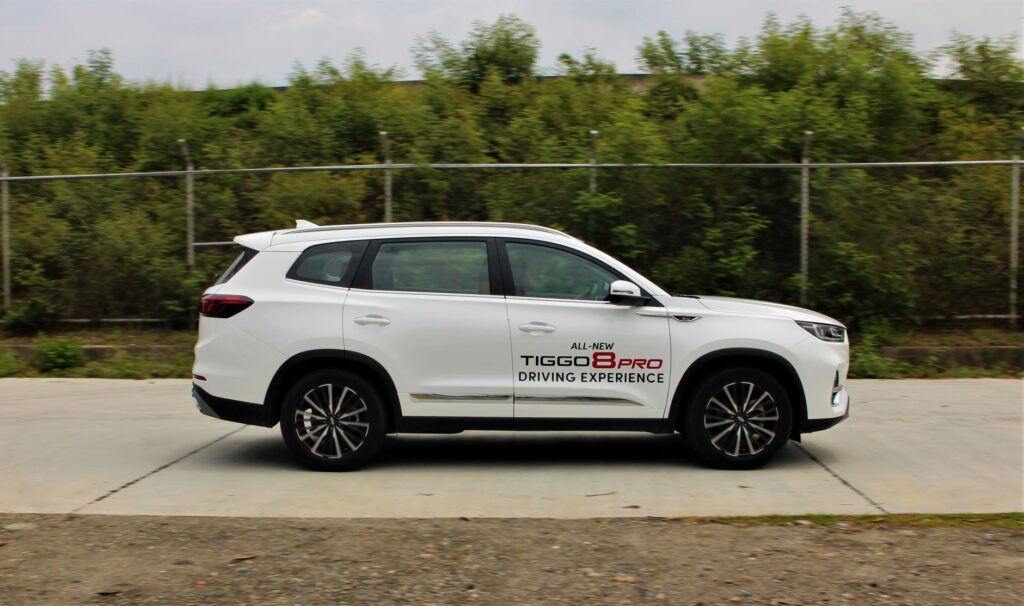 Who knows? During our drive, it was the Chery on top of Mt. Samat. Next thing you now, it might be the cherry on the top… 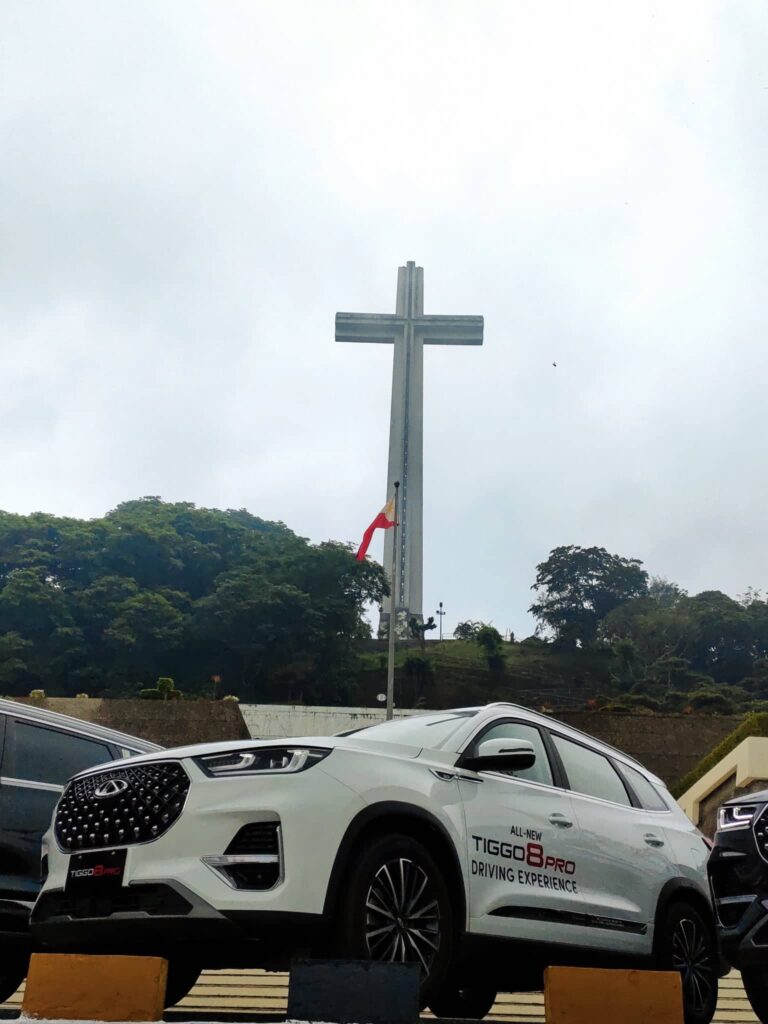