40 Years of the Mercedes-Benz G-Class 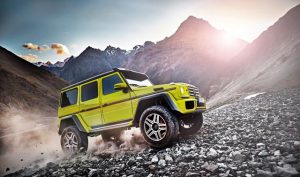 The Mercedes-Benz G-Class is now on its 4oth year yet its line of tradition is as straightforward as its iconic design. The G-Class has always remained true to itself and its values since 1979. The latest G-Class generation (W463), which premiered in January 2018, is clearly recognizable as the direct descendant of the first Geländewagen (cross country vehicle) or G Wagen 460/461. Mercedes-Benz has always preserved the unique DNA of the G-Class and you can sense it with every model from its conception to the present date. 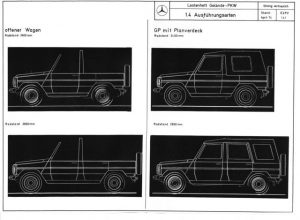 Mercedes-Benz had a clear development target. In the press kit prepared for the launch of the G Model in February 1979, the company stated: “Integrating extreme off-road capabilities with outstanding on-road characteristics in one vehicle was the main job of the Daimler-Benz development engineers when the Stuttgart-based automotive company made the final decision to build an off-road vehicle.” What was true then still holds true today, albeit in a vastly refined version. 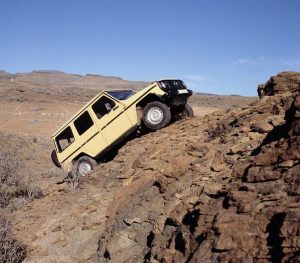 Despite being in the truck business before becoming popular around the globe as a German luxury car maker, Mercedes-Benz nevertheless entered uncharted territory with the Geländewagen or “cross country vehicle” at a time when the popularity of sport utility vehicles (SUVs) was still in its infancy. Known internally as the 460 but more commonly known as the G-Wagen, it was initially developed as a military vehicle from a suggestion by the Shah of Iran, Mohammed Reza Pahlavi, who was a significant shareholder at the time. While the Iranian Army under the Shah ordered several fleets of the G-Wagen, the first military in the world to use actually it was the Argentine Army beginning in 1981 with the military model 461. 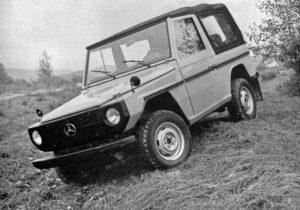 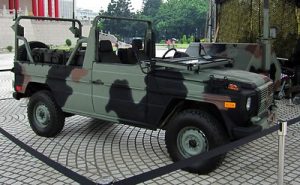 The development of the G-Wagen actually started in 1972 with a cooperative agreement between Daimler-Benz and Steyr-Daimler-Puch in Graz, Austria. Mercedes-Benz engineers in Stuttgart were in charge of design and testing while the team in Graz developed the production plans. The first wooden model was presented to Daimler-Benz management in 1973, with the first drivable prototype beginning various testing including German coalfields, the Sahara Desert, and the Arctic Circle in 1974. Construction commenced on a new production facility in Graz, where the new cross-country vehicle would be assembled nearly entirely by hand in 1975, with production of the G Model beginning in February 1979. 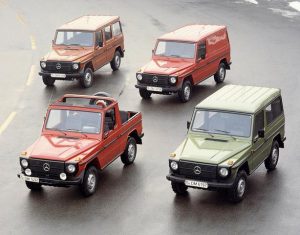 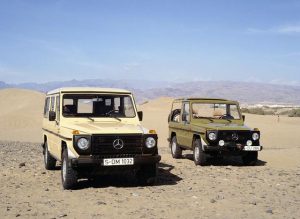 In 1980, the Vatican took delivery of a specially-made Mercedes-Benz G Model outfitted with a clear thermoplastic top which served as the Popemobile. The “Papa G” later took up permanent residence at the Mercedes-Benz Museum in Stuttgart, Germany. 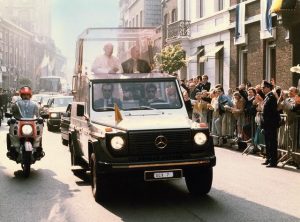 The first major refinements of the G Model were introduced in 1981, including an automatic transmission, air conditioning, an auxiliary fuel tank, protective headlamp grilles, and a cable winch. Fuel injection became available in 1982, when the 230 GE was introduced in Turin, along with more comfortable and supportive front seats, auxiliary heating, wider tires and fender flares. For 1985, differential locks, central door locking and a tachometer became standard, and by 1986, over 50,000 G Models had been produced. 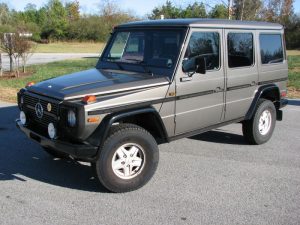 The G-Wagen received a facelift in 1990 and was given the internal nomenclature G-Class 463. For its 10th anniversary model, a new G-Class variant with permanent 4-wheel drive, a wood-trimmed interior and optional Anti-lock Braking System (ABS) debuted at the Frankfurt International Motor Show. For 1992, a new sub-series of the G Model for professional use began production while the civilian model began to offer cruise control, a stainless-steel spare-tire cover, running boards and Burl Walnut wood interior trim. The same year, the 100,000th G Model was built in Graz. 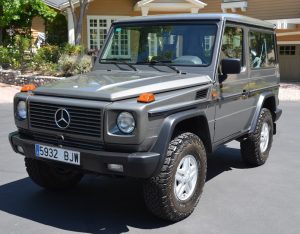 In 1994, the model line was officially renamed the G-Class following the nomenclature of Mercedes-Benz models (C-class, E-Class, S-Class, etc.)  Ventilated front disc brakes and a driver’s air bag became standard. In 1996, it received an electronically-controlled 5-speed automatic transmission, headlamp washers, cruise control and a front passenger’s air bag. In 1998, the range-topping G 500 with a 296 hp V 8 was introduced for series production. 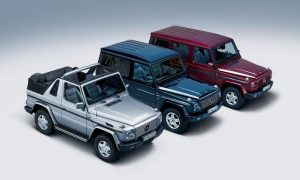 For 1999, a limited run of V8-powered G 500 Classic Special Edition models marked the model’s 20th anniversary. A multi-function steering wheel was added to all models. Later in the year, the new G 55 AMG with 345 horsepower debuts as the most powerful G-Class. New alloy wheels, a chrome grille and body-color bumpers plus a more luxurious cabin were introduced while new dynamic control systems included the Electronic Stability Program (ESP), Brake Assist and the 4 wheel Electronic Traction System (4 ETS). 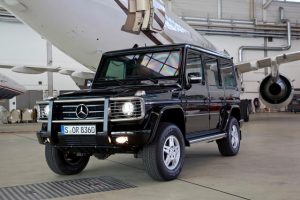 The G 55 AMG was upgraded in 2004 with a supercharged V 8 engine developing 476 hp. In Siberia in 2006, a documentary filmmaker was the first foreigner to reach the world’s coldest region with a passenger vehicle in winter, driving a stock G 500 nearly 19,000 km without a single breakdown, in temperatures as frigid as ?63?F/-53 °C. 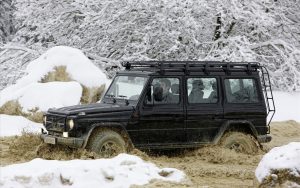 Off the road, the G-Class treads nearly every path. Scaling a mountain summit is already part of the development programm of the off-road vehicle with the legendary test track of Steyr-Daimler-Puch on the Schöckl, the local mountain of Graz. The design, the optimal handling in terrain and on the road, the outstanding versatility, and of course, the Mercedes-Benz star on the radiator grille make it unmistakable today. The capabilities of the all-wheel drive of the G-Class come to the fore in particular impressive fashion off the road. As a result, the off-road vehicle follows a long tradition, which began with the Daimler-Motoren-Gesellschaft (DMG) Dernburg-Wagen in 1907 and the Unimog and its portal axles in the second half of the 20th century. Lessons learned from evolving technologies benefited a number of special models of the G-Class, including the G 63 AMG 6×6 (2013), the G 500 4×42 (2015) and the Mercedes-Maybach G 650 Landaulet (2017). 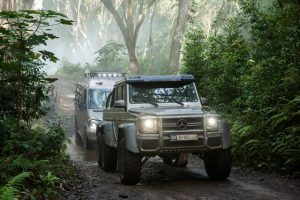 At the premiere in 1979, the planners at Mercedes-Benz assumed that there would be no more than 10,000 vehicles of the G-Wagen per year. Today, some 20,000 G-Class units come off the Graz factory production line each year. In its fourth decade, the G-Class is more popular than ever with customers all over the world. This all-terrain classic is ideally situated for the demands of the future with the new W463 model series, production of which began in May 2018. Daimler AG Management Board Member and Mercedes-Benz Group Research and Cars Development Head Ola Källenius commented, “The new G-Class raises the bar one notch higher in all the relevant areas – with regard to performance on and off the road as well as in terms of comfort and telematics. Our ‘longest serving’ model series is thus superbly prepared to continue to perpetuate its success story. To put it in a nutshell: the new ‘G’ is still a ‘G’, only better”. 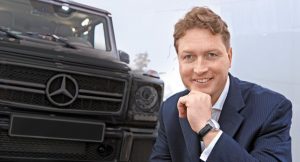 The story of the G is also the story of a transformation from an adequately-powered climbing artiste with rather austere interior into a luxuriously appointed off-road vehicle with respectable power reserves. The developers also relied on optimal technical solutions to combine maximum off-road capabilities and refined ride quality on the road. At the same time, the technical design of the vehicle was being advanced continuously. The three differential locks became standard equipment in 1985, the 463 model series with permanent all-wheel drive was launched in 1990, and a unique combination of driving dynamics and traction system became available in 2001. The new generation of the G-Class debuted a front axle with independent suspension while improving its off-road capabilities. 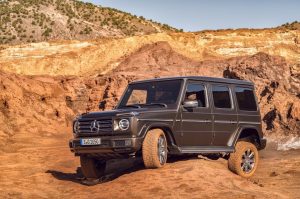 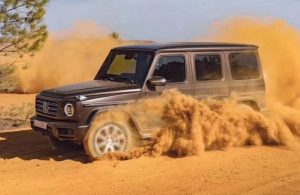 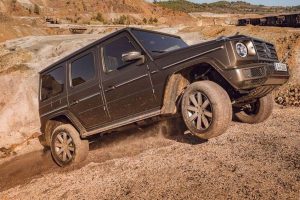 Besides cutting a great figure not only in tough everyday use and as a luxurious off-road vehicle, the G-Class has figured in off-road motorsports, including the overall victory in the 1983 Paris-Dakar Rally, as well as many successful missions in fire brigade, rescue and police services. From the early days when municipal services and rescue mobility needs relied on the G-Class up until today when the elite relies on the them as a status symbol, the Mercedes-Benz G-Class has remained steadfast in its design and in its mission. May it continue to be relevant for 40 more years! 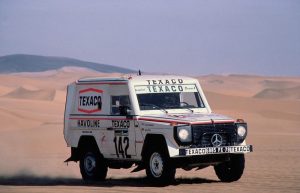 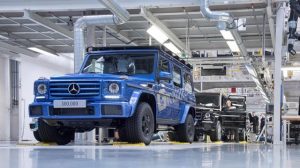 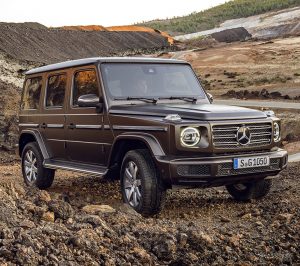