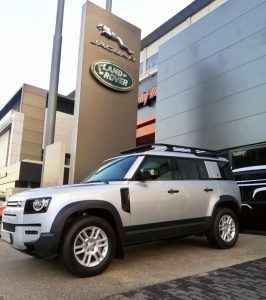 I have to admit that I have very limited experience driving the iconic Land Rover. The first time I ever rode in one was when I was a grade school student in the 1970s. My uncle Nestor Razon would sometimes swing by our house in his old 1960-something Land Rover Series II service vehicle on his way to work and I would hitch a ride to school just a few blocks away. During those days, a Series II was just an old used car and I found the interior bare, the ride jarring, and the whole experience crude and uncomfortable. While my uncle claimed that it was like a mountain goat that can go anywhere, it was not my dream car. 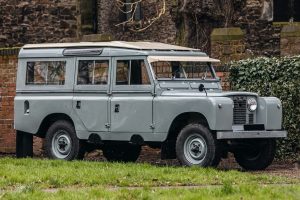 In 2015, former CAGI president Robby Consunji and his wife Mona picked me and my wife Shawie up from our office in Quezon City in his brand-new dark green Land Rover Defender 110 and drove to Pampanga for a series of meetings. I was surprised with the big improvement of Robby’s modern Defender over my Uncle Nestor’s old Series II. The interior was plusher, the ride was more refined, and the whole experience was more pleasant. I could hear some wind noise on the highway, feel some compression of the aluminum doors at speed, and found the ergonomics a bit outdated but I had to concede that Robby’s 2015 Defender 110 directly evolved from my uncle’s crude old Series II. 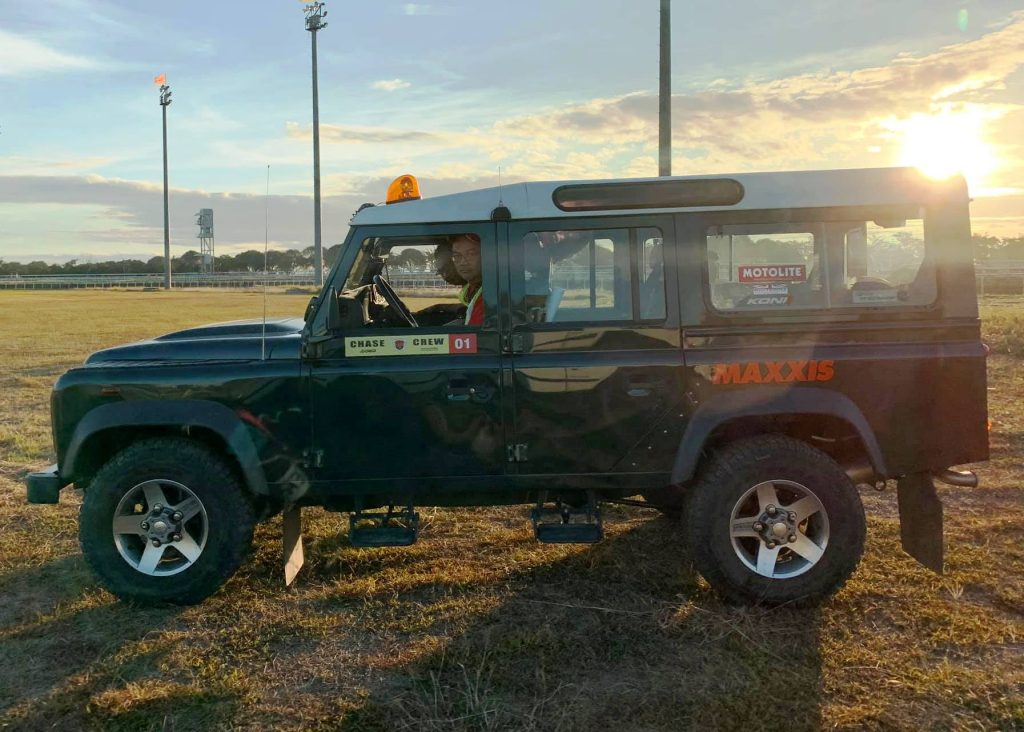 Difficult Challenge To Replace An Icon

Fast forward to July 22, 2020 and we got an invitation from Land Rover Philippines to take a sneak peek at the new generation Defender at their showroom along EDSA in Greenhills, San Juan City. AVP for Sales Ryan Bermudez welcomed us into the display area where an Indus Silver 2020 Land Rover Defender 110 S P400 Explorer was waiting for us. This vehicle replaces the previous-generation Defender, which went out of production since 2016. Ryan explained that the new-generation Defender was a bold step for Land Rover. Their engineers and designers really did their homework before coming out with a modern replacement for an automotive icon. 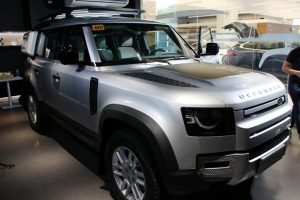 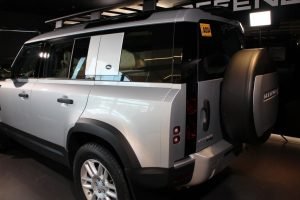 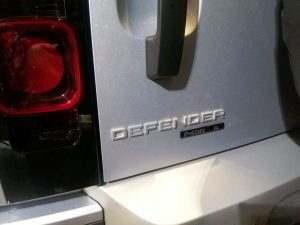 Ryan showed us around the British SUV and I commented how to my eyes, the Defender 110’s 5-door configuration and longer wheelbase looked more balanced than the Defender 90’s 3-door body style and shorter wheelbase. He pointed to the design features that connect it to its iconic predecessor like the tough boxy shape, the purposely short overhangs, and the go-anywhere stance. He also explained that the P6,610,000 Defender 110 Explorer package added a P300,000 premium over the Defender 110 Urban to include accessories like the wheel arch protectors, front and rear classic mud flaps, matte black hood decal, side-mounted gear carrier, spare wheel cover, and expedition roof rack. He mentioned that the deployable step ladder and the raised air intake were not installed because the shipment was delayed. 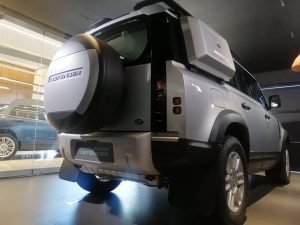 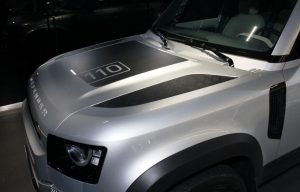 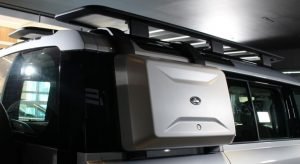 When the specs of the new-generation Defender came out, Land Rover purists immediately criticized it as too heavy with its 2.3-metric-ton curb weight; too complex with its Mild Hybrid Electric Vehicle (MHEV) powertrain, Adaptive Dynamics, Terrain Response, Electronic Air Suspension, Wade Sensing, and other electronic driving aid systems; and too expensive with prices starting at P6,310,000 for the Defender 110 Urban up to P9,390,000 for the Defender 110 First Edition.  But Land Rover Philippines wanted to show that the new-generation Defender is a much more rounded and more accomplished off-road machine – one that can do what the previous model could do but with increased competence, improved efficiency, and heightened safety. 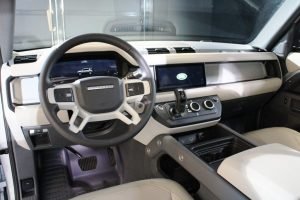 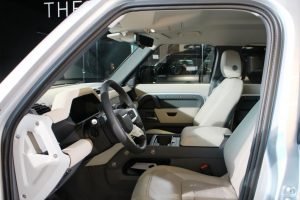 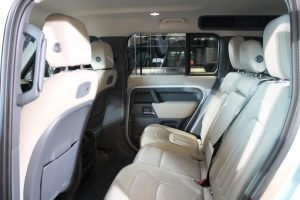 Land Rover engineers intelligently combined hardware and software into the new-generation Defender starting with a new D7x architecture that is basically a tougher and stronger version of the D7u architecture used in the current Range Rover and Range Rover Sport models. It features a very rigid all-aluminum monocoque structure that JLR claims to be ten times stiffer than the average body-on-frame off-road SUV. The suspension components are likewise significantly strengthened but the addition of the air suspension system dramatically increases the ride comfort and driving characteristics. “While it looks big, boxy and robust”, commented Marketing Manager Mon Buela, “the Defender is surprisingly car-like to drive. It is quick, maneuverable, and light on its feet.” 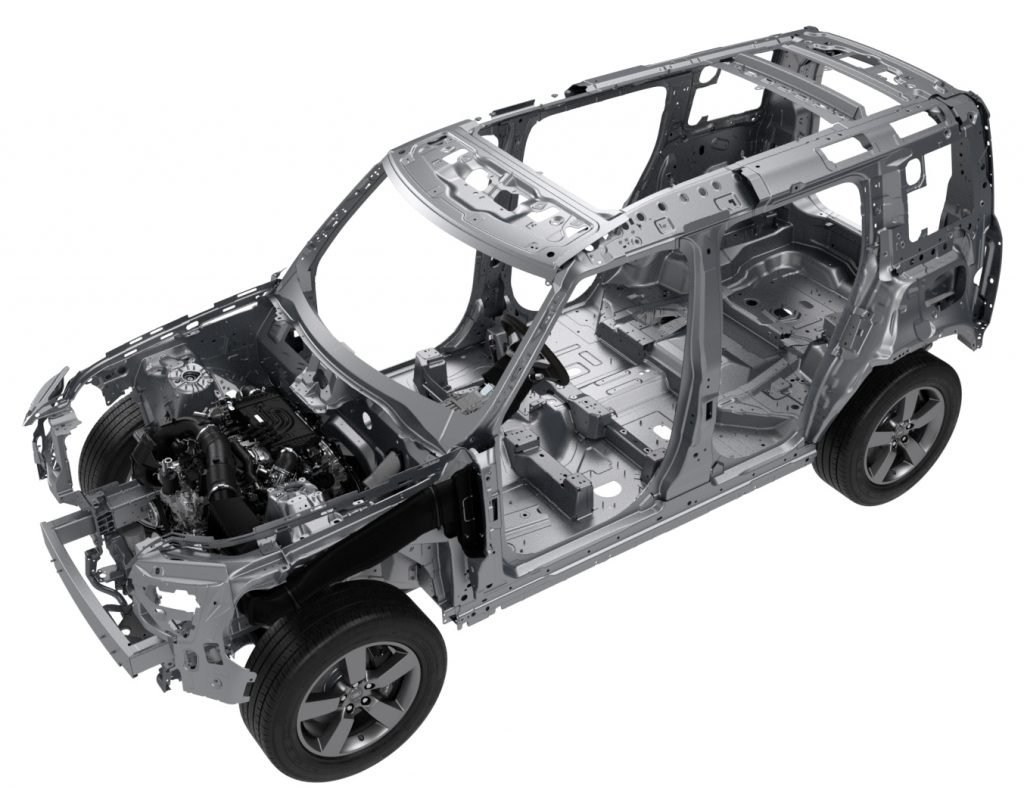 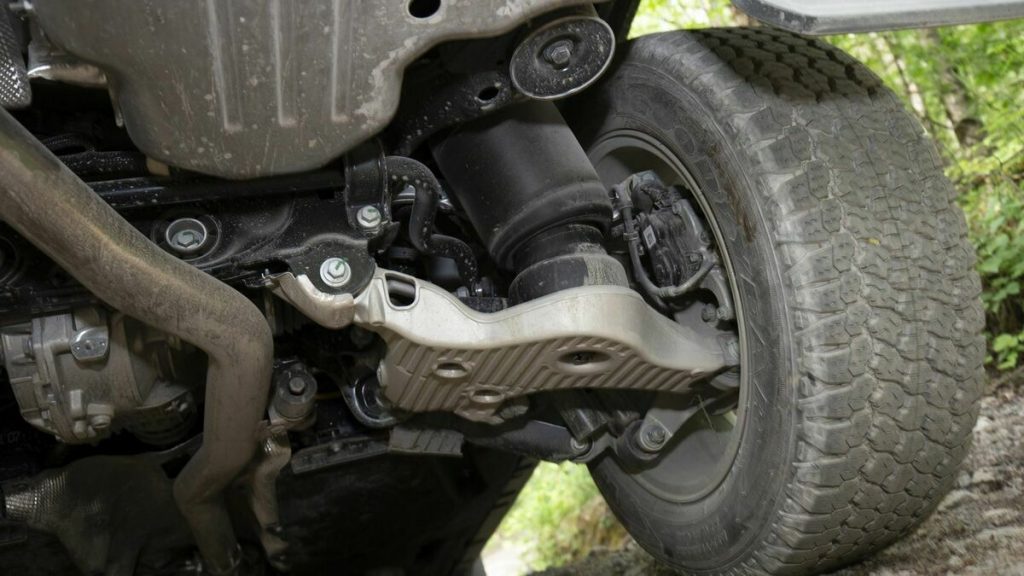 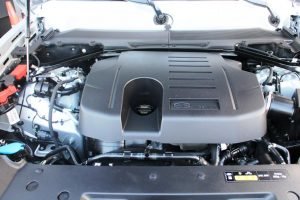 A Short Drive with the New-Generation Defender

It is often said that the proof is in the pudding, so without much ado, Mon threw us the keys to the new Defender 110 Explore so we can drive it around the Greenhills area. I started the engine and immediately noticed that the mechanical noises that accompany the older Land Rovers are absent. The 4-spoke steering wheel with its soft leather-wrapped rim and the stubby gear selector fall naturally to hand as I drove the vehicle out of the showroom and into light EDSA traffic. The new turbocharged, mild-hybrid 3.0-liter Ingenium inline 6-cylinder engine quickly outpaced the traffic with its smooth torque buildup up to 500 Newton-meters at 2,000 rpm. It felt unnatural, but the combination of the engine, 8-speed automatic transmission, and the air suspension made this new Defender run oh so smooth. 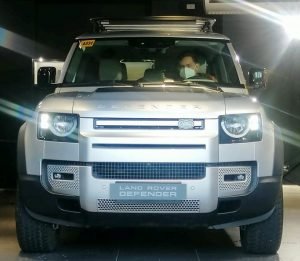 I start the engine and begin to drive the new Defender 110 out of the JLR showroom. 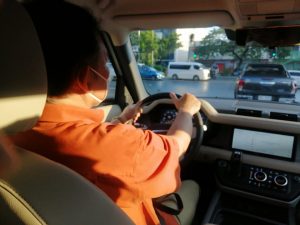 The driver’s cockpit was comfortable, ergonomic, and offers a position of power. 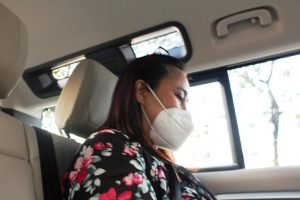 Shawie enjoyed the supple ride at the rear seat and the trademark Alpine windows on the roof.

I changed seats with our Power Wheels TV-Cruise Control director, Kevin Bruce Francisco, who tried to invoke the Ingenium engine’s electric supercharger to unleash all 375 horses under the hood through the 255/65R19 All-Terrain tires and unto the asphalt but the evening rush hour traffic was beginning to crowd the roads. My wife Shawie and I enjoyed the smooth ride at the rear seats as the big British SUV causes the occupants of other large SUVs on the road to crane their necks and check out our ride. The new Defender 110 definitely felt relatively soft and plush like its Range Rover stable mates while its body rolls felt a bit more controlled. 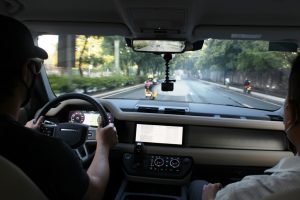 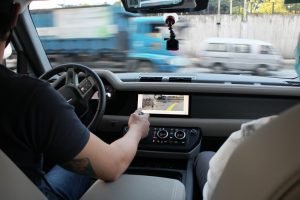 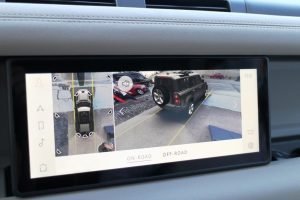 … and the 3D surround camera that allows the driver to accurately place the Defender 110 in a chosen spot.

Our one-hour schedule with the new Defender 110 felt so short and we soon found ourselves heading back to the dealership to hand over the vehicle to the next test drivers. Before we left, we had a short chat with General Manager Chris Ward, who enthusiastically asked for our driving impressions of the new model. I repeated how Land Rover purists are lukewarm towards the new Defender but then joked that the purist’s children will love it. Chris countered that they will bring in the 3-door Defender 90 by the first quarter of 2021 and pay homage to its past by equipping it with coil springs instead of the air-suspension and white steel rims instead of alloy wheels to appeal to the hard-core off-roaders and Land Rover purists. We can’t wait for a longer weekend test drive. Consider me a new Land Rover convert. 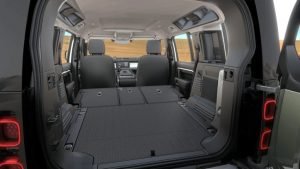 The rear seats fold flat to increase the cargo capacity from 875 liters to 1,946 liters. 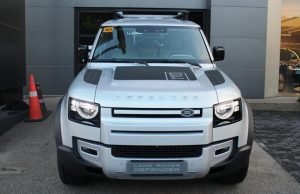 The front of the new Defender exudes toughness and purpose… 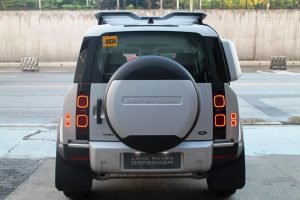 … while the view behind shows a thoroughly modern take on the boxy British icon. 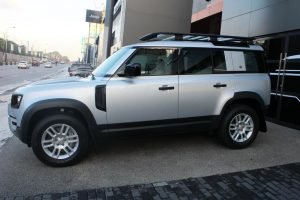 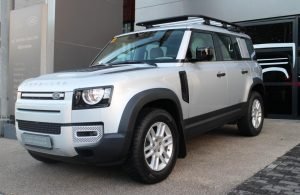 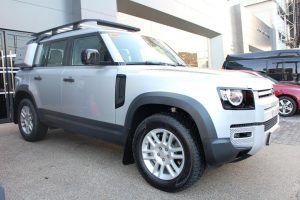 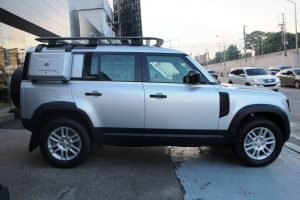 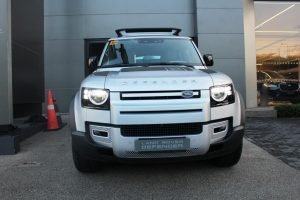 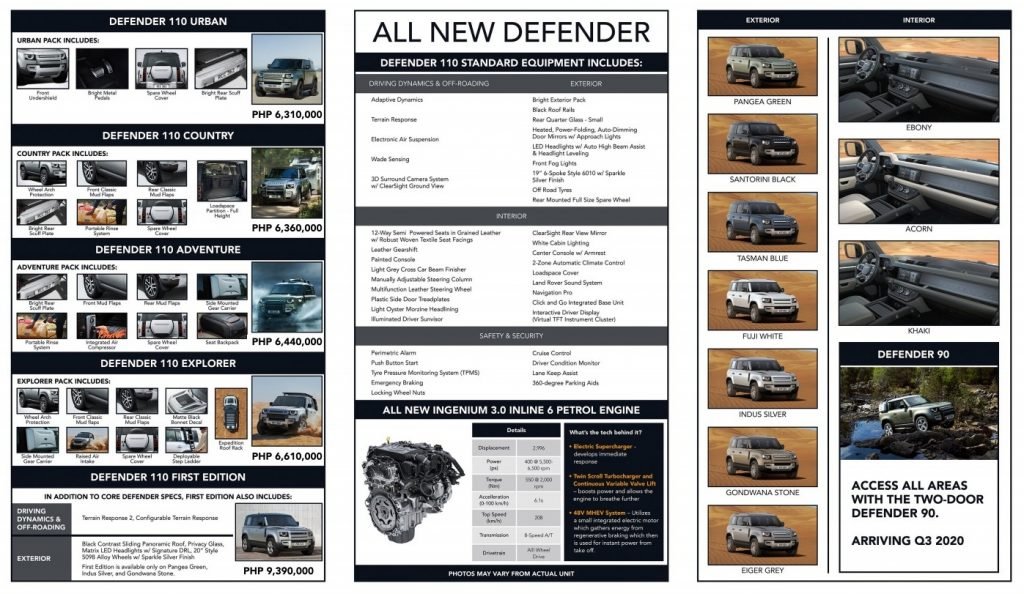