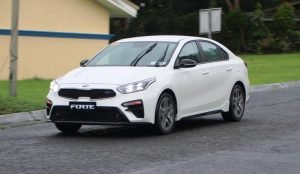 I was driving along the rain-soaked toll ways with the cruise control set at 100 km/h when I saw a white late-model pickup truck beginning to loom large in my rear view mirror. The pickup truck was obviously being driven way above the speed limit so I gave way and moved to the slower lane on the right. But the slower car in front of me switched to the left lane and inadvertently blocked the speeding truck. Since my lane suddenly became open, I pressed the accelerator pedal to pull away. The white pickup truck swerved behind me and began tailgating my car. 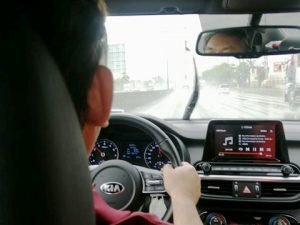 To put some distance between the truck’s front bumper and the rear bumper of my car, I punched the throttle and built more speed. The male driver of the white pickup must’ve been surprised that a non-descript white 4-door sedan could accelerate with such ferocity and leave him eating dust, or in our case, a rooster tail of rainwater. He tried to catch up but, at extra-legal speeds, the tall turbo diesel truck couldn’t match the advantages of a wind-cheating sedan with a low center-of-gravity. Unfortunately for that pickup driver, he didn’t know that I was driving a “sleeper”. 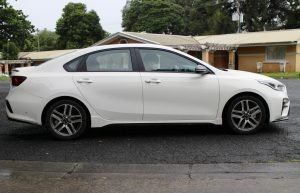 In American automotive parlance, a “sleeper” is a car that has an unassuming exterior but capable of high performance. The exterior of sleeper cars looks similar or identical to a standard or economy-class model. And, by any definition, the 2020 Kia Forte Turbo GT that I was driving is a sleeper. It looks exactly like the sedate Forte compact sedan but it comes with a turbocharged 1.6-liter T-GDI DOHC inline-four that churns out a hefty 201 horsepower and a healthy 265 Newton-meters of torque. 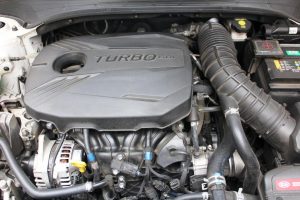 Unknown to the driver behind me, all those 201 horses were moving a sedate-looking Kia that has better aerodynamics than his truck and a curb weight of only 1,335 kilograms. Despite being saddled with my 180-kg weight, as well as the combined weight of my wife, our two grown kids, our Siamese cat, and all our stuff, the power-to-weight ratio of our turbocharged Forte still held an advantage over his white pickup, even if he only had one nagging female passenger. I can only guess that the driver was nagged even more for his dangerous driving habits. 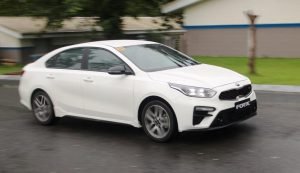 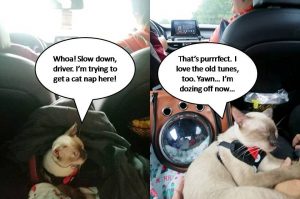 Far from being simply sedate, Kia Motors designed the front-wheel-drive Forte compact sedan with styling links that mimic their Stinger rear-wheel-drive sports sedan. However, the Forte Turbo GT with its turbocharged engine, 7-speed dual-clutch (DCT) automatic transmission, tweaked suspension, and aggressive accessories legitimizes that familial styling connection. It’s perfect for those who want Stinger-like styling and performance at half the price. 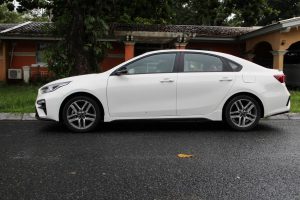 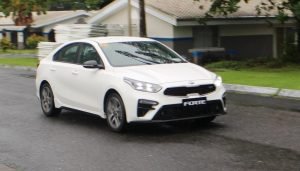 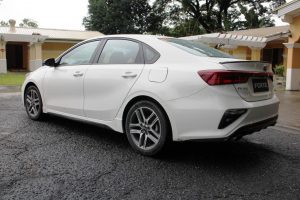 To distinguish it from the Forte LX and EX variants, Kia equipped the GT Turbo with subtle exterior tweaks including a black grille with red inserts, body kit, black rear spoiler, and 17-inch five split-spoke wheels wrapped with meaty 225/45SR17 tires. Viewed from the front and the sides, you’d be fooled to think that the Turbo GT was just an accessorized Forte. But once it passes you, the dual exhaust outlets and the GT emblem at the back will make you realize that you’ve been had by a sleeper. 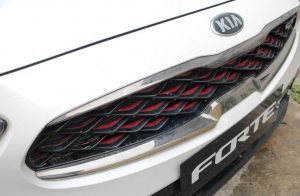 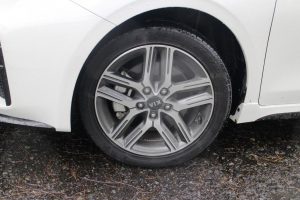 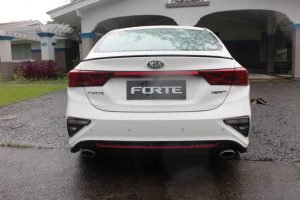 A leather-wrapped flat-bottom steering wheel with push buttons and switches for the infotainment system and cruise control, paddle shifters, two large round gauges with an LCD display in the middle, and power sport seats with sporty red piping and supportive bolstering make the cockpit. The 8-inch touchscreen, which also acts as a monitor for the reverse camera, plays AM/FM radio, CD, MP3 with USB, AUX ports, Bluetooth, AppleCarPlay and Android Auto connectivity through 4 speakers (one in each door) and a pair of tweeters. Backseat passengers have their own A/C vents and a fold down center armrest that can also hold their drinks. 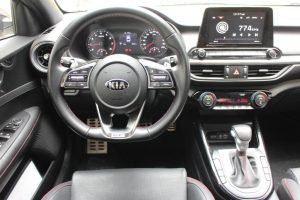 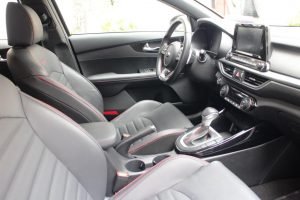 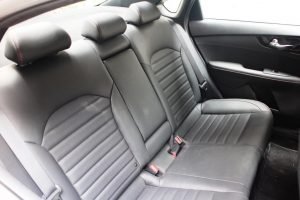 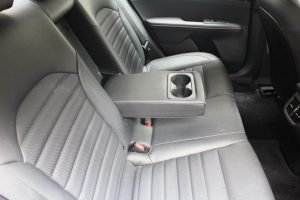 You can actually feel the differences when you switch the Driving Mode to your choice of Comfort, Economy or Smart modes. In Smart mode, we easily went beyond the speed limit to get away from a tailgating white truck. Despite my spirited driving, we achieved a fuel mileage of 12.5 kilometers per liter on the highway and 9.4 km/L in the city driving with the ubiquitous traffic jams. With four occupants and our stuff, the ride was smooth and supple, which lulled our Siamese cat to sleep. With just the driver and no passengers, the tweaked front McPherson struts with stabilizer and the independent rear multi-link beam suspension of this turbocharged Kia can transmit more road feel than you might care to have, but perhaps that’s the trade-off when you want sporty handling. 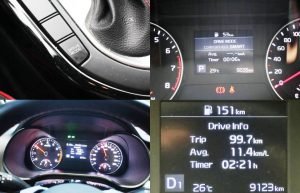 Changing the Driving Mode from Comfort to Eco or Smart changes the car’s characteristics without a big penalty on fuel economy. 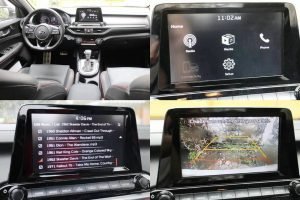 The centrally-mounted 8-inch touchscreen is easily viewed by all passengers and acts as the monitor for the reverse camera. 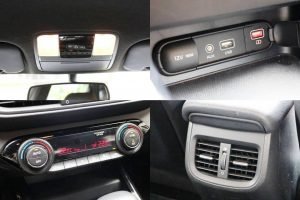 Overall, the Forte Turbo GT is a great sports sedan albeit a sleeper. Its overall shape and performance even reminds me of an older Bavarian favorite, the 1997-2006 E46 BMW 3-series. At P1.65 Million, it is not exactly affordable but it does come with a lot of extra oomph, extra features, and a fuel mileage that’ll beat sport sedans costing several times more. Toss in the 5-year, 160,000-kilometer warranty, and the 2020 Kia Forte Turbo GT begins to look like a bargain. Add its innate ability to easily leave tailgating vehicles behind, and suddenly, this unassuming sleeper is priceless. 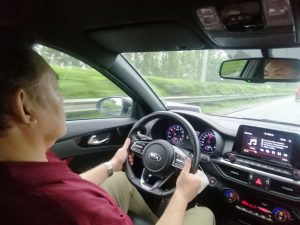 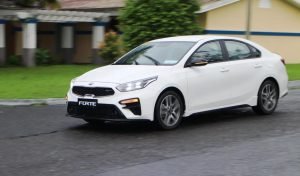 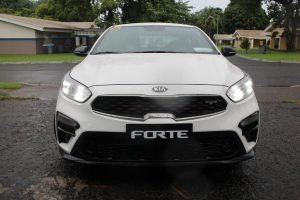 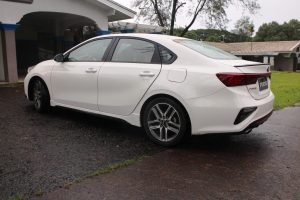