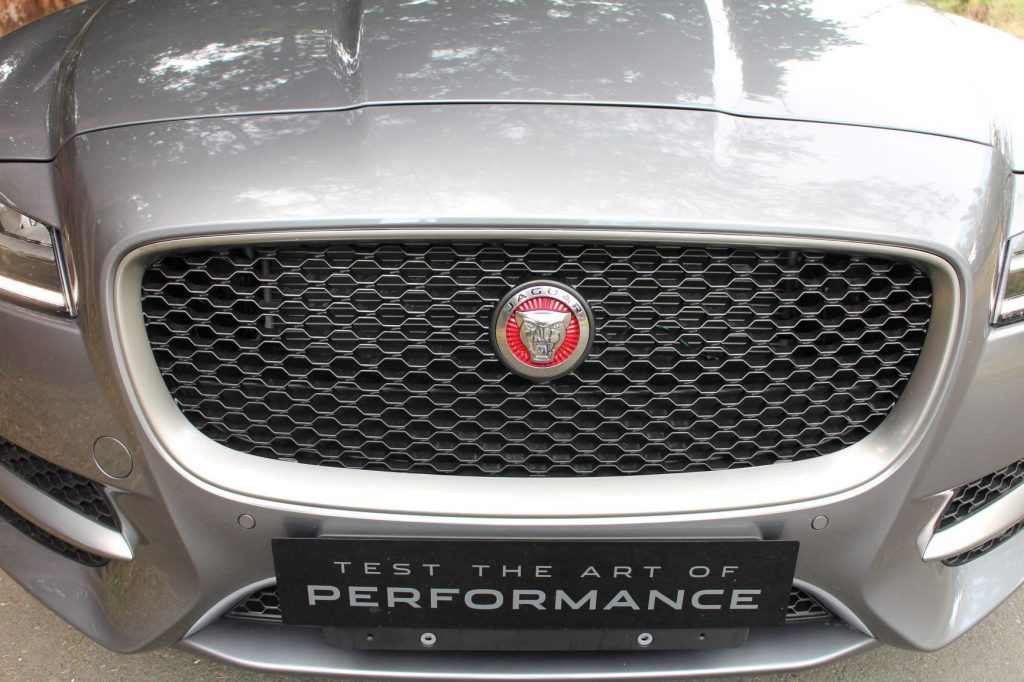 We have to admit that we have a soft spot for the older Jaguar flagship sedans. We’ve always admired the classic elegance and graceful shape of the 1968-1992 Jaguar XJ (Series 1, 2 and 3) with their quadruple round headlamps, chrome grille, thin pillars, tapered rear, and eloquent overall design. This elegant design lineage remained intact up to the 2003-2009 XJ (X350 series) and some design elements can be found even in the entry-level 2001-2009 X-Type. 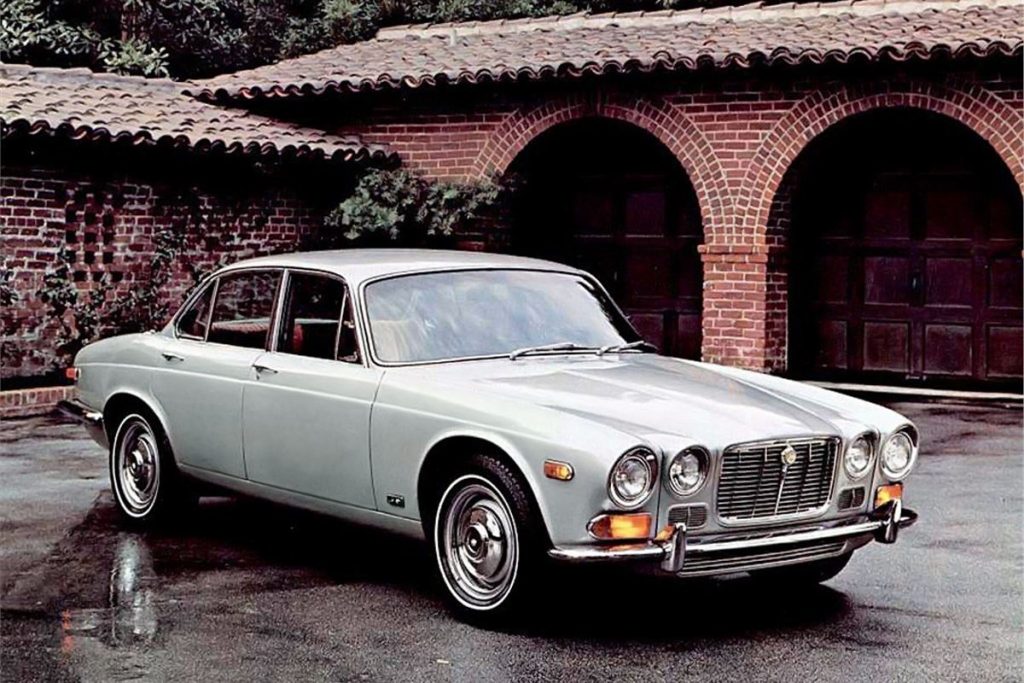 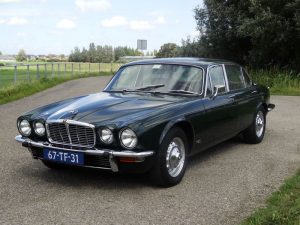 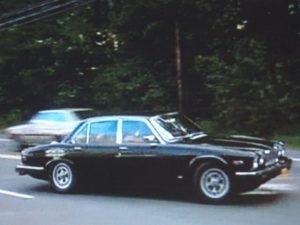 Jaguar embarked on a new design language for the 2010-2019 XJ (X351 series) that was longer and wider than the previous series. Its rear design was controversial because of the “cat claws” upright swooping tail lights while the front carried a familial resemblance to its executive sedan sibling, the XF, which replaced the S-Type in the company’s model line-up. However, after serving as the official transport of British Royalty and senior government officials, Jaguar Land Rover (JLR) discontinued the XJ series after a solid 51-year run, leaving the XF with big shoes to fill. 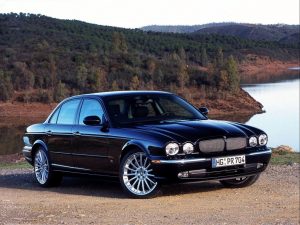 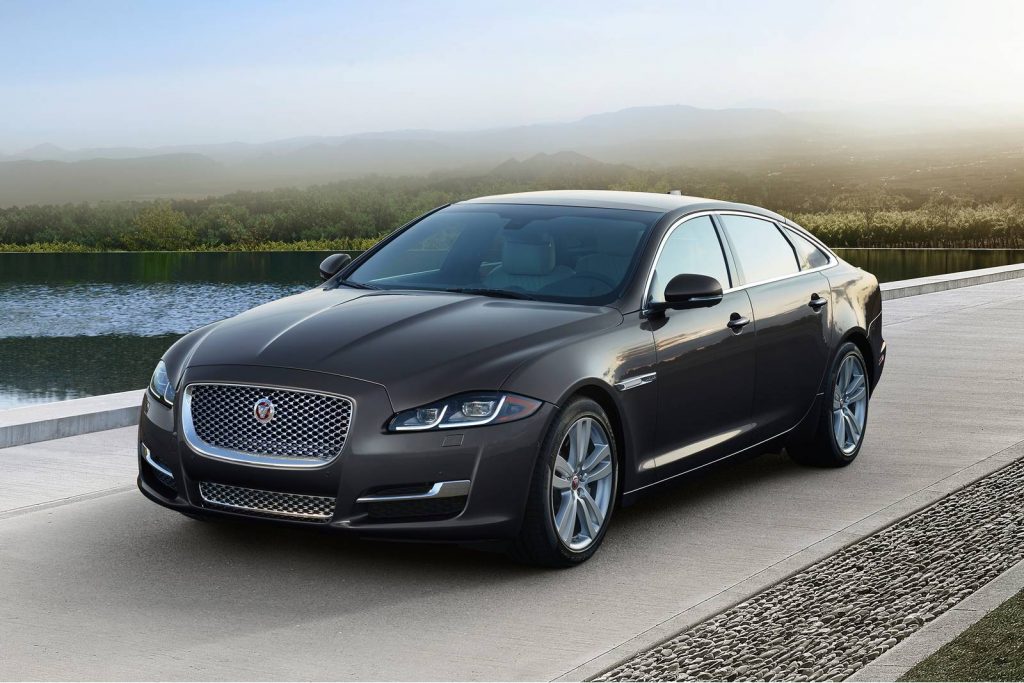 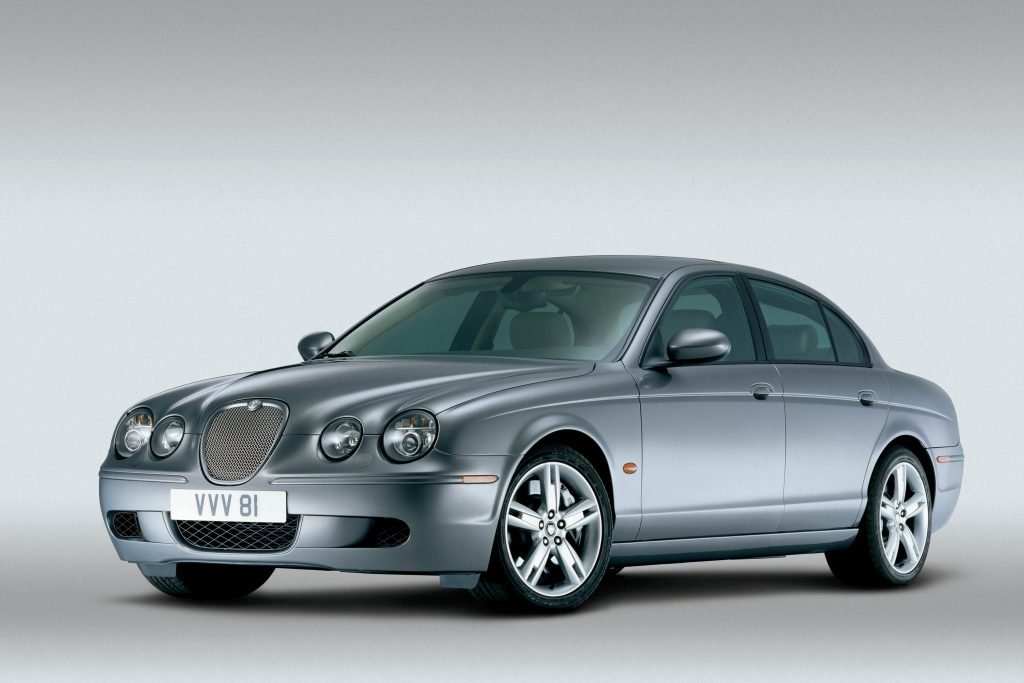 Thus, our expectations were high when we recently had the privilege to drive a 2020 Jaguar XF R-Sport for a weekend jaunt to Batangas for an overnight stay at Casa Corazon Resort and Museum located in the town of Lemery. Before we drove away with the XF, we were expecting a slightly smaller, a bit less expensive XJ that can carry the torch for the quintessential British luxury sedan. Since it was positioned as an executive sedan, we were also expecting a Jag that can compete with the likes of the Mercedes-Benz E-Class, BMW 5-Series, and Audi A6. 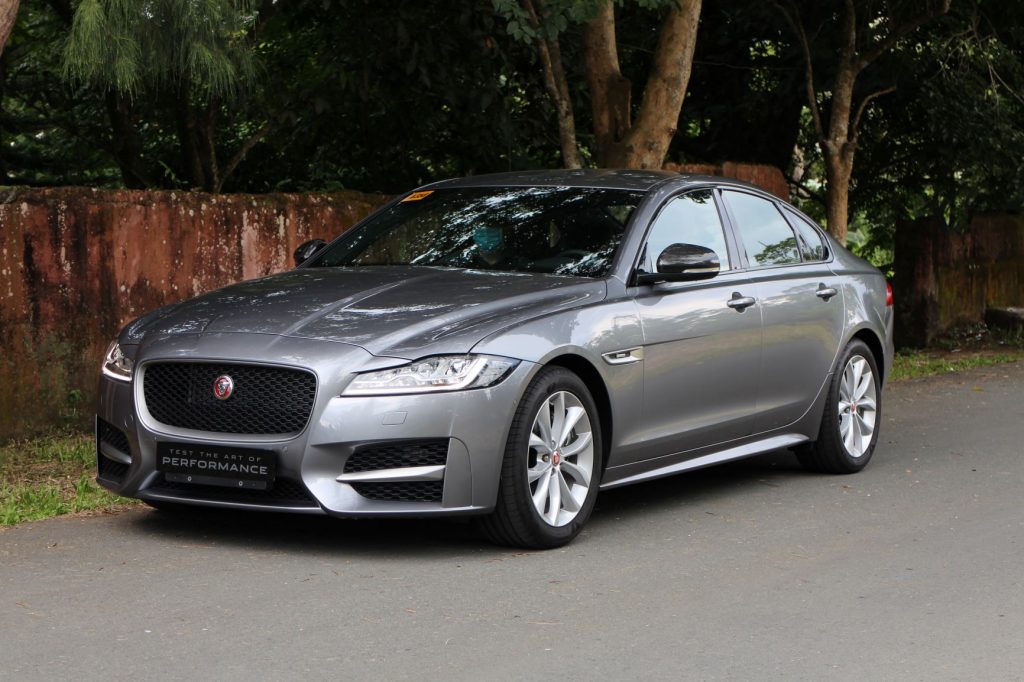 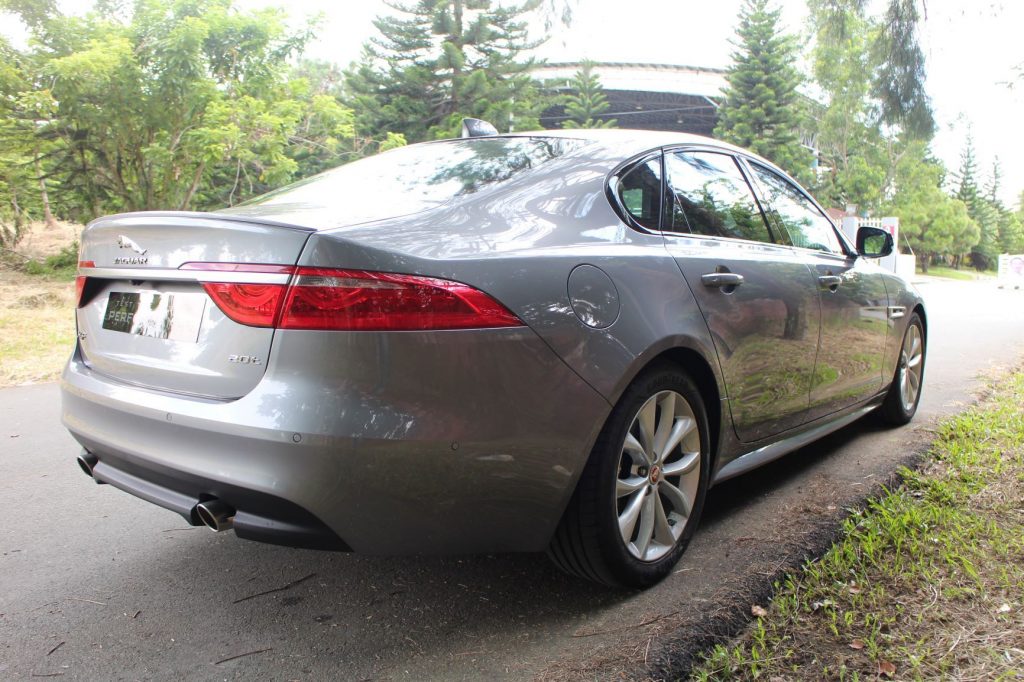 On the road, the XF waifs through the post-ECQ traffic effortlessly with a ride comfort expected of an executive-class luxury car. The interior is quiet and posh while the ride is soft and compliant thanks to the XF’s Lightweight Aluminum Architecture that provides an exceptionally strong and stiff platform. Attached to this innovative architecture is a sophisticated F-Type-derived double wishbone front suspension and Integral Link rear suspension system that provide sports car-like agility and dynamism. 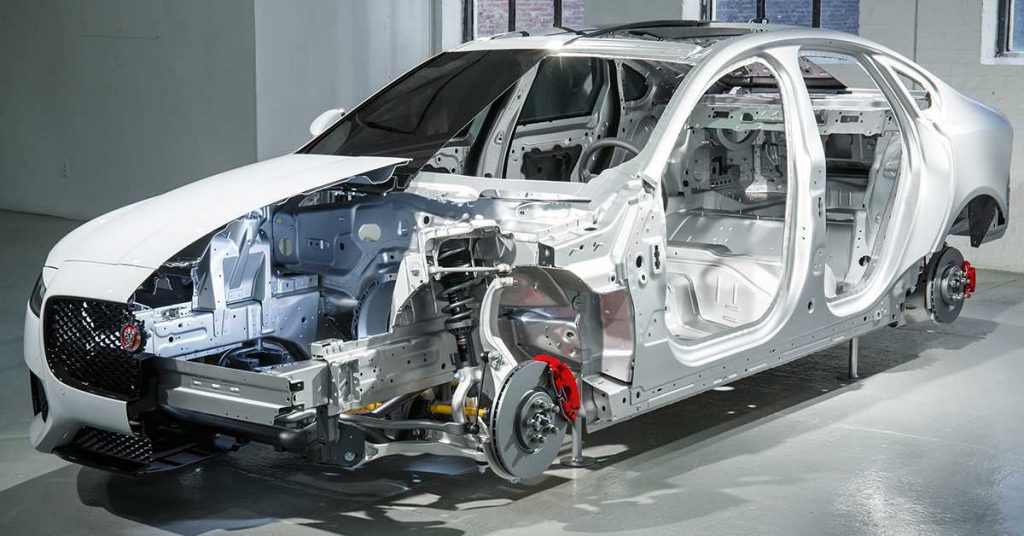 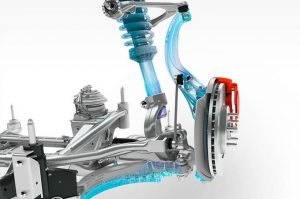 Besides facilitating a near perfect 50:50 weight balance, Jaguar claims that the XF’s extensive use of aluminum makes it one of the lightest vehicles in its class. Aside from endowing the XF with uncommon rigidity, agility and dynamism, the company also claims that the Lightweight Aluminum Architecture helps improve fuel efficiency and helps reduce carbon emissions to make this Jaguar one of the more environment-friendly cars in its class. Our long drive south seemed to substantiate and confirm these claims. 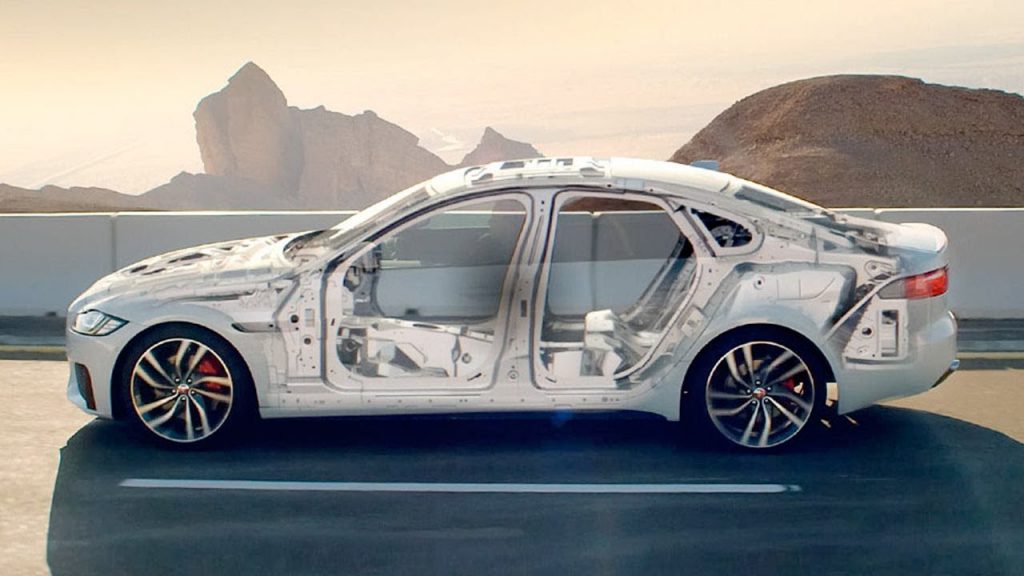 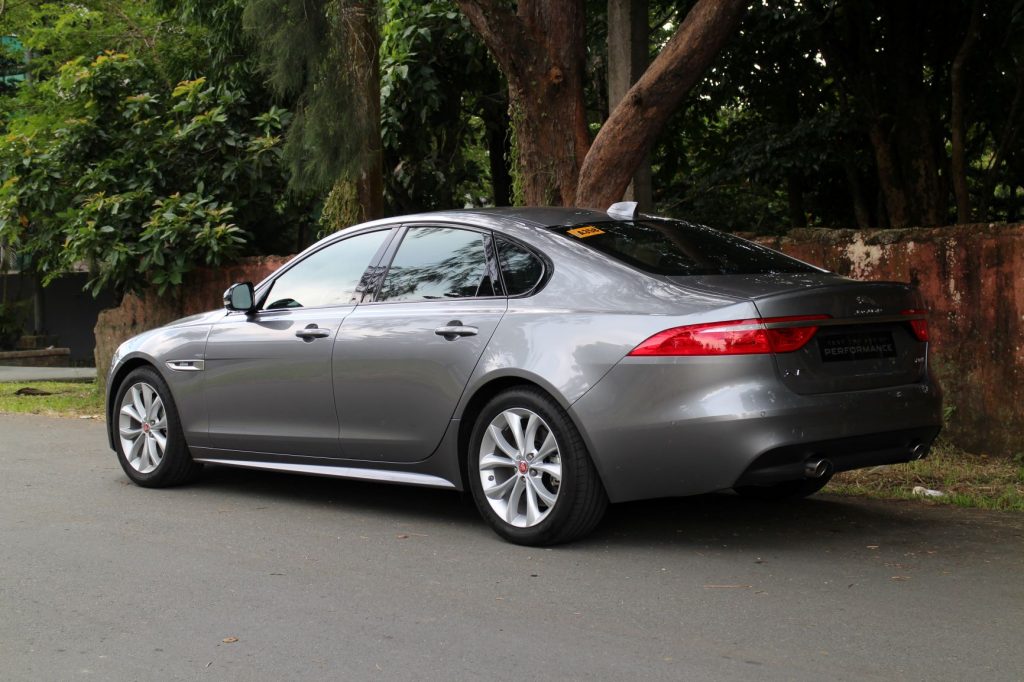 Under the hood is JLR’s innovative Ingenium line of turbocharged 4-cylinder engines that churn out 340 Newton-meters of torque that takes the XF from zero to 100 km/h in just 7.5 seconds. The 2.0-liter double overhead camshaft (DOHC) 16-valve Ingenium inline-4 makes 197 horsepower (200 PS) that propels the XF to a claimed top speed of 235 km/h while consuming only 6.8 liters every 100 kilometers (14.7 kilometers per liter) in combined city and highway driving. We were fortunate to find light traffic during our drive to feel the XF’s power but we tempered ourselves not to explore its upper limits. 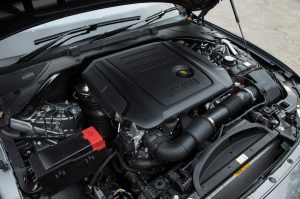 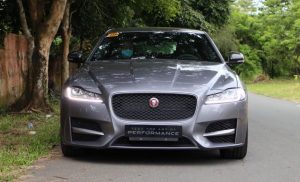 Our rear-drive XF features a plethora of modern driving technology to improve safety and performance. The All Surface Progress Control (ASPC) is a low-speed cruise control that helps overcome poor traction in situations like wet slippery roads to allow the driver to focus on steering. The Electric Power Assisted Steering (EPAS) uses sophisticated computer management to adapt the levels of steering support and works with the Lane Keep Assist (LKA) and Park Assist to offer increased safety and convenience. 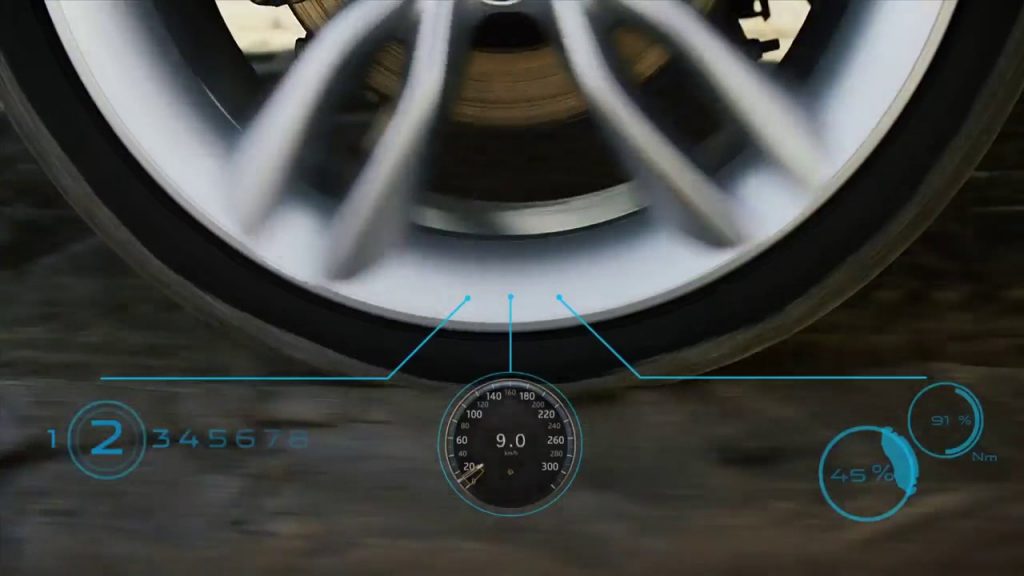 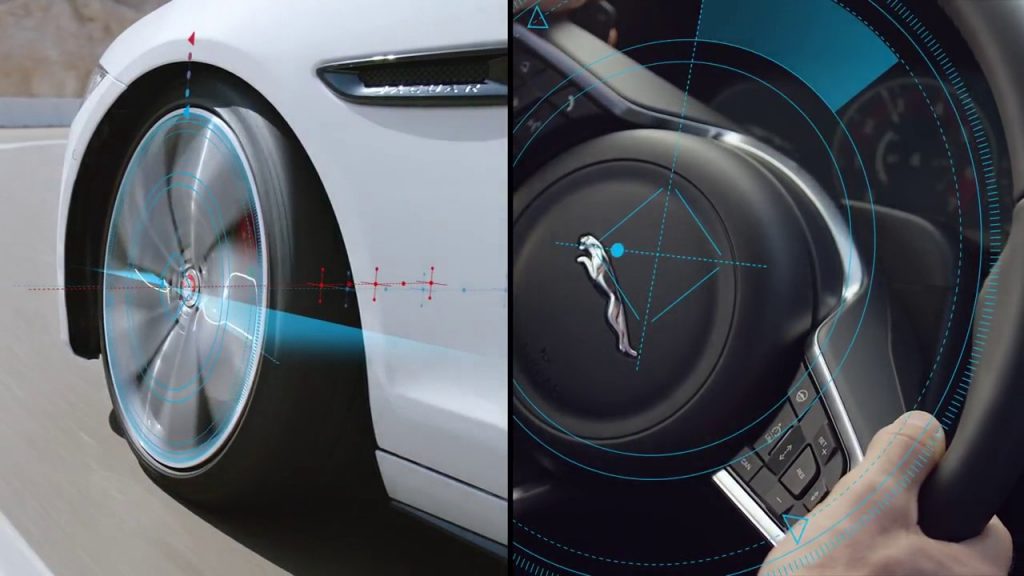 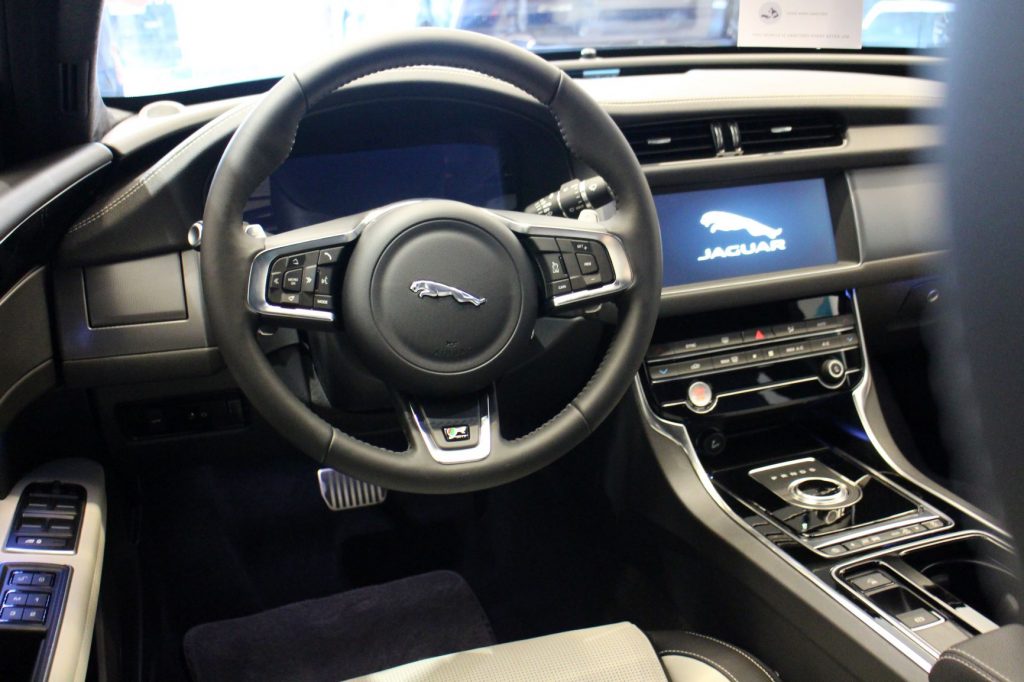 On the zigzags of Diokno Highway from Tagaytay to Lemery, we selected Dynamic Mode to get a feel of the XF’s potential. With a push of a button, the car’s driving character became sportier, the throttle response sharper, the steering weightier and more communicative, and gearshifts quicker at higher revs. We later learned that an optional Adaptive Dynamics can personalize the settings by configuring the damper settings to match the road conditions and our driving style while balancing poise and comfort all the time. 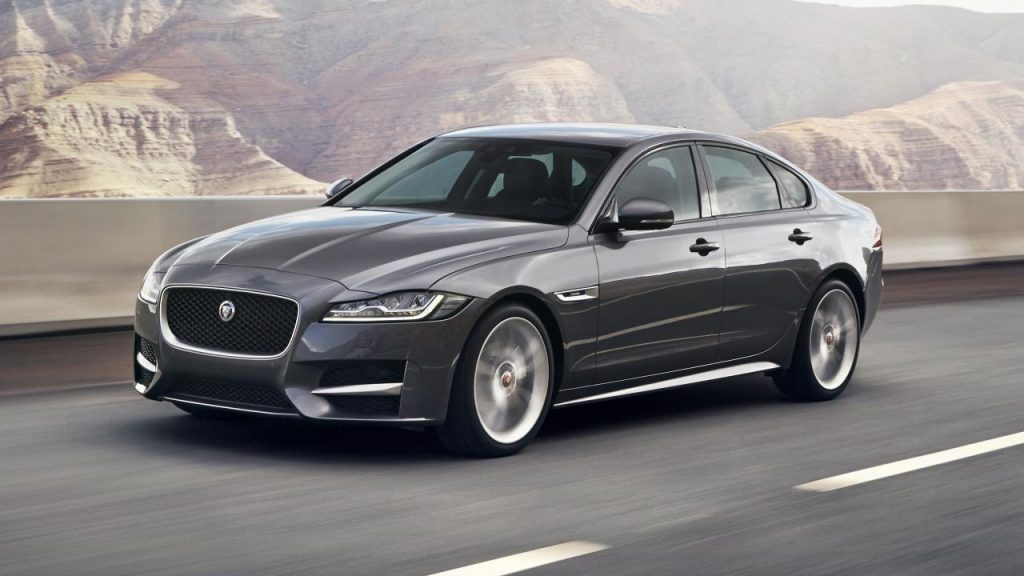 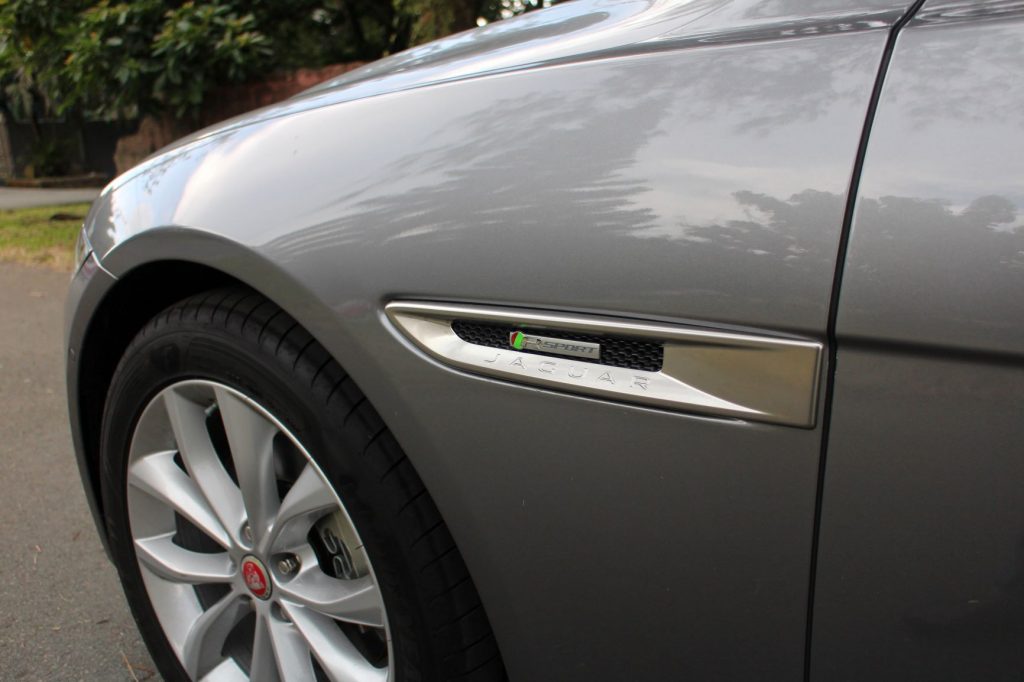 In Dynamic Mode, the 18-inch 5 split-spoke alloy wheels shod with meaty 245/45ZR18 tires earn their keep by providing the much needed traction. Likewise, the need for the R-Sport exterior package, which includes the body kit, sport front bumper, satin chrome power vents, side sills, and subtle trunk spoiler is justified. Inside, the sports seats covered in technical mesh and grained leather work, the metal tread plates and the multi-function R-Sport-badged steering wheel reminded us that we are inside a special XF with sports suspension. 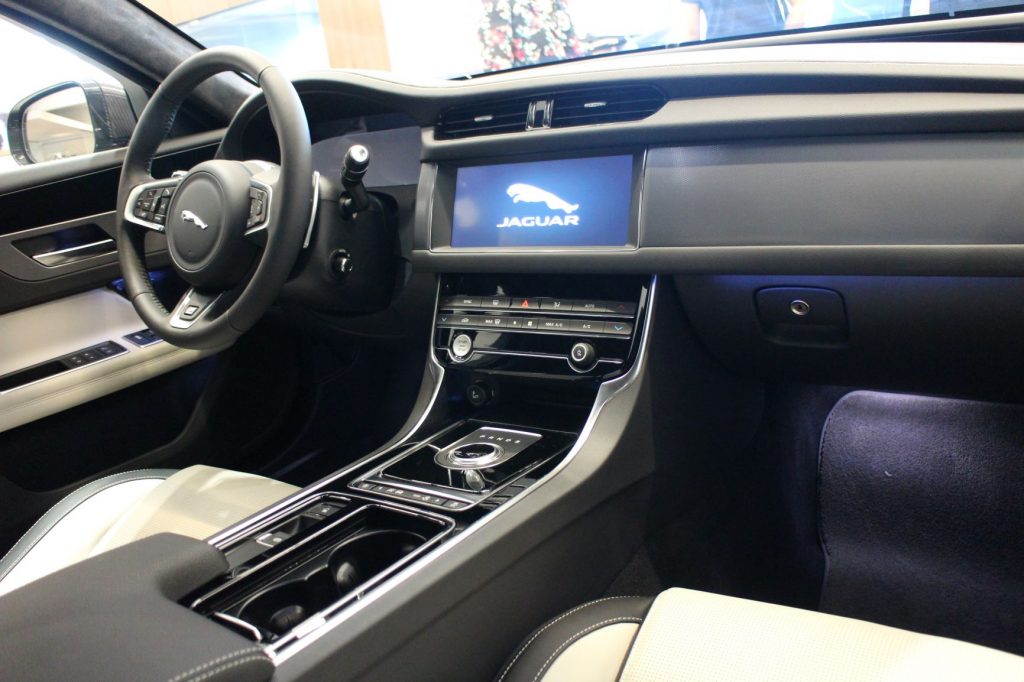 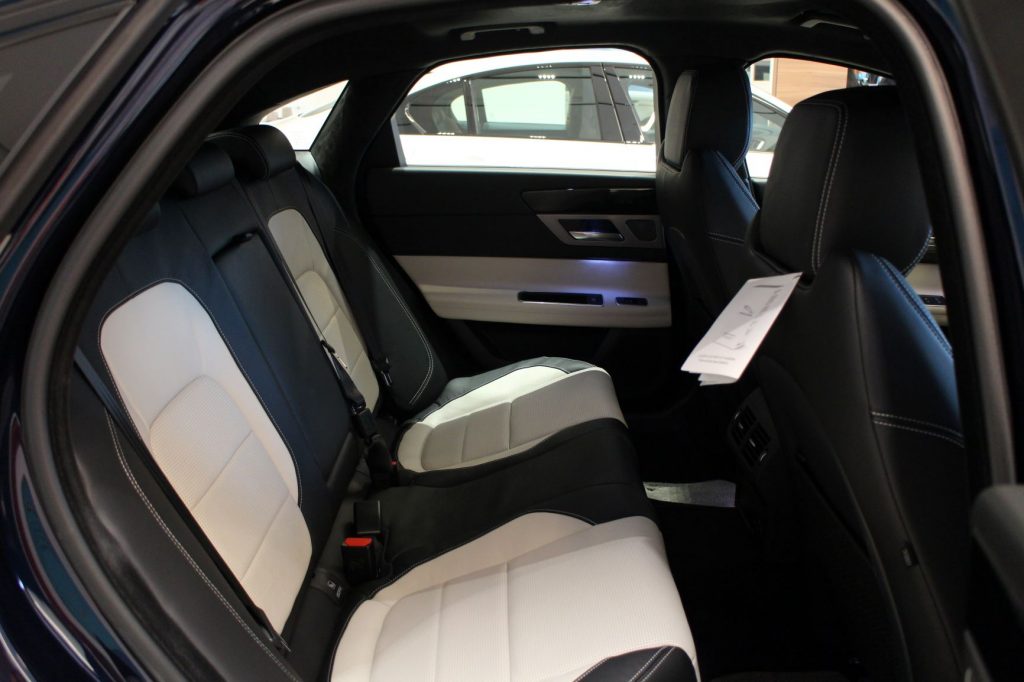 After our long and enjoyable drive in the 2020 Jaguar XF R-Sport, we think that all its features and driving dynamics justify its P4,590,000 price tag. While we still carry a torch for the shapely old Jaguars, we cannot deny that the XF in its R-Sport guise and with all its modern technology is an executive luxury sedan that we’d rather drive in today’s post-pandemic traffic. Please excuse us if we’re driving the XF with a stiff upper lip – that’s just us trying to keep with the car’s British character. 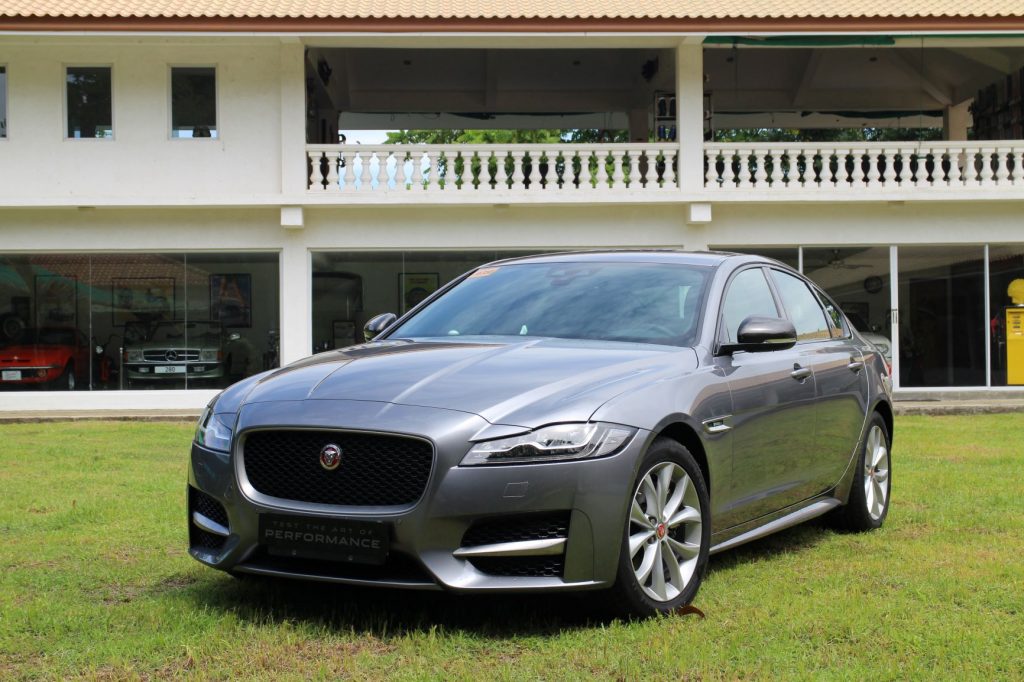 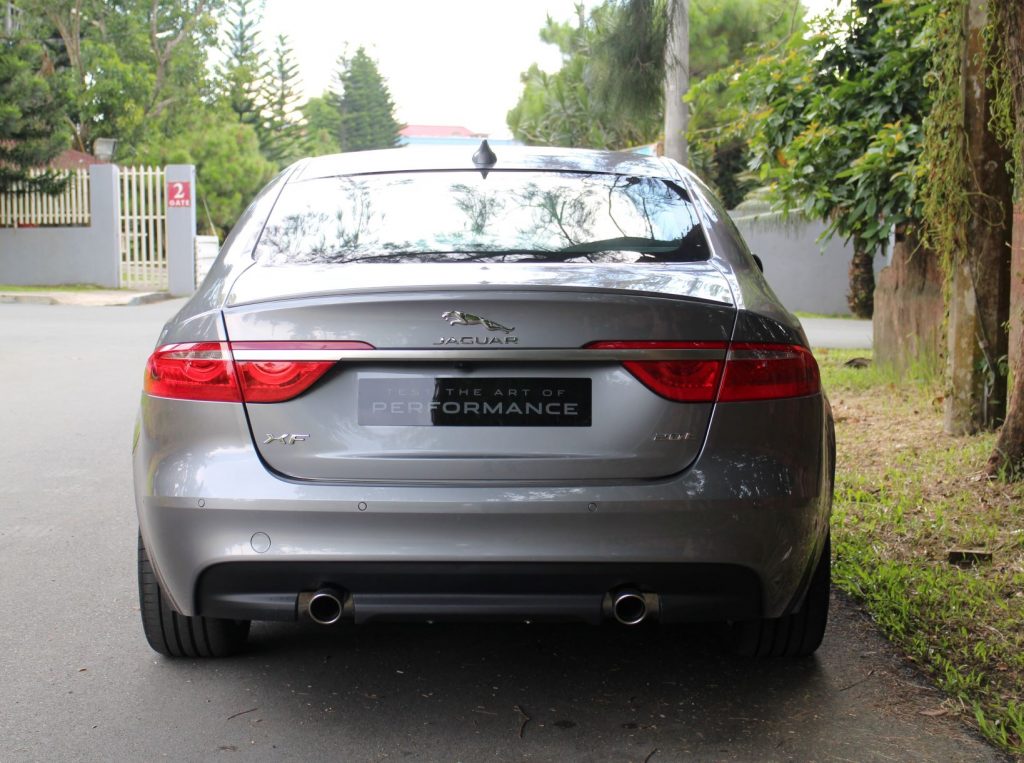 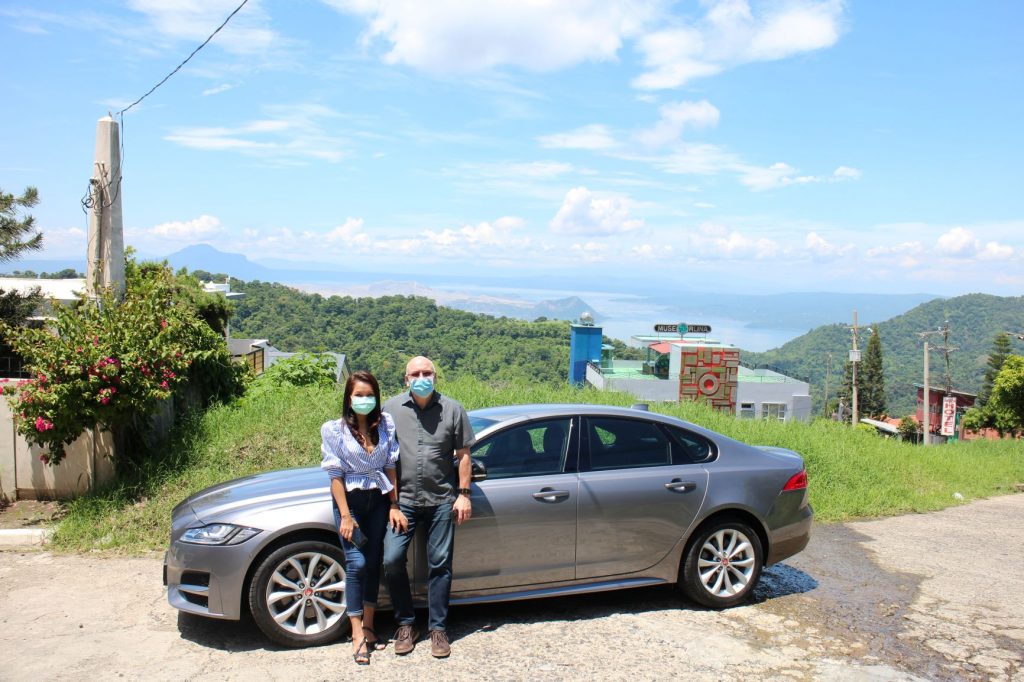