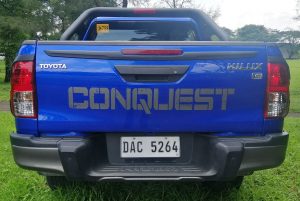 Merriam-Webster dictionary defines the word “conquest” as “the act or process of conquering” or as “something conquered especially a territory appropriated in war” or as “a person whose favor or hand has been won”. Toyota Motor Philippines (TMP) couldn’t have picked a better name for its top-of-the-line pickup truck, the Toyota Hilux Conquest because it has won the hearts and minds of Filipino pickup truck buyers. 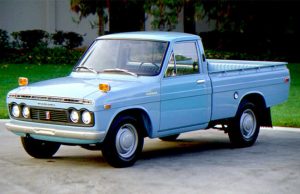 The Toyota Hilux, or “Hi-Lux” as it was known during its introduction in March 1968, has developed a legion of fans and enthusiasts around the world. Now on its eighth generation, the Hilux has won the vote of hundreds of thousands of customers and numerous awards from various publications dedicated to off-road machines, 4x4s and pickup trucks. It has spawned a camper version, the Toyota Trekker in 1984, which became the basis for the popular Toyota 4Runner and Hilux Surf mid-size SUVs, as well as their sportier SR5 versions. Because of the American penchant for large pickup trucks, the Hilux grew into the Toyota Tacoma for the U.S. market. 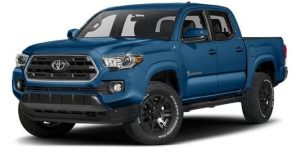 Finding Out For Ourselves

We never really considered ourselves as pickup truck aficionados or 4×4 off-road enthusiasts so we decided to borrow a 2019 Toyota Hilux Conquest 2.8 4×4 A/T to find out where all that Hilux love and loyalty are coming from. TMP’s Nadinne Capistrano sent us their Hilux Conquest media test drive unit finished in a retina-scorching Nebula Blue color and fitted with Toyota Racing Development (TRD) accessories. While we love the color, the tall ground clearance and the 18-inch wheels, we’re not big fans of over-accessorized vehicles. However, we later found that the TRD accessories on our Hilux Conquest were also functional than just being mere decorations. 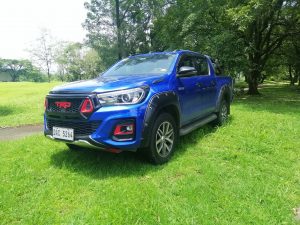 On the first day we drove it around, we were surprised with how many Nebula Blue Hilux Conquests there were on the road. We couldn’t help but flash our lights when we see one on the opposite lane, or give a quick nod to the occupants when we drive alongside one. I guess the drivers of the Hilux Conquests that we encounter along the way feel the same way and they respond in kind with a flash, a horn, a nod or a wave. It feels good to be acknowledged by a fellow motorist in a world that is stuck in slow-moving traffic. Perhaps, cruising relaxed in a Hilux Conquest with a 6-speed automatic transmission can be one of the solutions to minimize road rage. 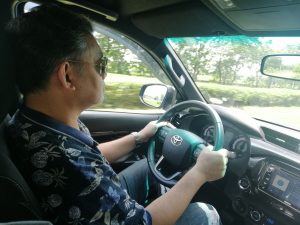 We loaded one of our neglected Japanese scooters into the bed of our Hilux Conquest to deliver it to a motorcycle repair shop in Caloocan. The liner-equipped bed offered enough space for our scooter with the tail gate closed while four tie-down clasps or anchoring points offered enough strength to tie our scooter firmly. The bed liner prevented the metal bed from being scratched and acted as a sound proofing so we can quietly cruise to the shop without the scooter’s center stand thumping on the bed. We were surprised with the crowd we attracted when we were unloading the scooter at the shop. Most of the kibitzers were asking about our blue Hilux Conquest more than its two-wheeled cargo. 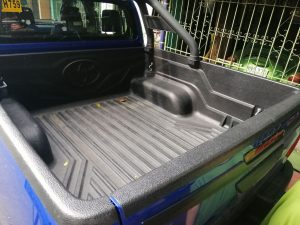 We drove the Toyota pickup truck to Pampanga to attend the 2019 Vios Racing Festival at the Clark International Speedway (Please click the “Motoring Events” box above to see the story) and we were pleasantly surprised with its ride comfort and handling on the highway. While the ride is firm and controlled due to the four-wheel-drive mechanisms, front double wishbones, rear leaf springs, and solid axle suspension system, it was not too jarring or choppy as we expected. In fact, it was almost car-like in behavior, provided of course, that driver does not forget that the Hilux Conquest has a higher center of gravity with its high ground clearance. We found new acquaintances who just like to know more about our TRD-accessorized ride every time we open its door. We’re beginning to feel that our Hilux Conquest can generate new friendships just because it’s so popular. 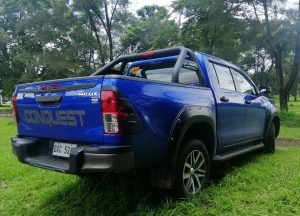 From Hilux G to Gee Whiz!

To learn more about our ride, we traced its lineage. It starts as a P1,636,000 Hilux G 2.8 4×4 A/T variant where Toyota adds exclusive accessories and paint, 18-inch alloy wheels and 265/65R18 Bridgestone Dueler All-Terrain tires, a roll bar and bed liner, graphics and other upgrades to transform it into a P1,792,000 Hilux Conquest 2.8 4×4 A/T. Adding TRD-branded accessories such as the grille, skid plate, fog light bezel, door sill plates, door handle guards, black over-fenders, tail light bezel, mudguards, tailgate garnish, and hydraulic hood struts will relieve your wallet of around P180,000 but will transform Toyota’s winsome pickup truck into a conversation starter and acquaintance-generating machine. 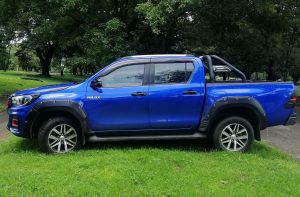 The Hilux 2.8 4×4 A/T G and Conquest variants are powered by a 2.8-liter inline-4 diesel engine equipped with variable nozzle turbo charger (VNT) and front mounted intercooler, common rail diesel injection (CRDi), sixteen valves (16V) and double overhead camshafts (DOHC) that churns out 172 horsepower at 3,400 rpm and 450 Newton-meters (Nm) of torque between 1,600 and 2,400 rpm. When coupled with a 6-speed stick shift, the torque is throttled down to 420 Nm between 1,400 and 2,600 rpm. During our entire drive, we kept the power selector in economy (Eco) mode and had a quarter of a tank left of its 80 liters after a week and a half of driving. 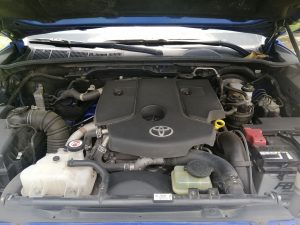 Parting Is Such Sweet Sorrow

We were supposed to have the media test drive Hilux Conquest for a week but we became so enamored with it that we asked Nadinne if she could extend our drive for a couple more days. We were inexplicably overjoyed when she granted our request. We just found ourselves wishing that we could park one in our garage more regularly. We looked at the P1.792M suggested retail price (SRP) of a brand new 2019 Hilux Conquest 2.8 4×4 A/T and found that it is a realistically priced vehicle that is thrifty with fuel, surprisingly comfortable, and easy to drive everywhere. However, we have to admit that we do not have space in our garage to park one unless we finish and dispose one of our project cars. 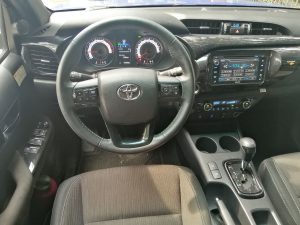 While we prefer a less accessorized version, we loved the comfortable interior and the ergonomics behind the design of the controls inside the Toyota Hilux Conquest. We even found some gadgets helpful, like the Heads-Up Display (HUD) and a small dash cam mounted high near the ceiling. Perhaps, it was the way our Hilux Conquest performed during our test drive, or perhaps it was the repeated playing of The Beatle’s hit song “All You Need Is Love” on its easy-to-navigate infotainment system, but we suddenly found ourselves wishing for a financial windfall to enable us to buy one along with a new property to park it in. Yes, we suddenly feel that “all we need is a Hilux pickup truck”. We have to hand it to Toyota for naming the Hilux Conquest quite appropriately – for it has conquered us, too. El conquistador de mi corazon: The conqueror of my heart, indeed! 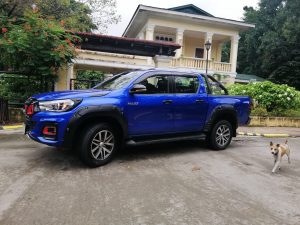 Even the dogs come near when we alight from our Nebula Blue Toyota Hilux Conquest. 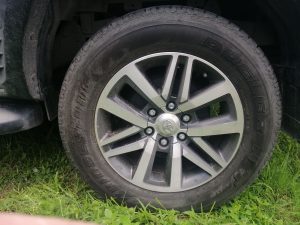 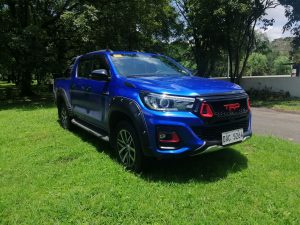