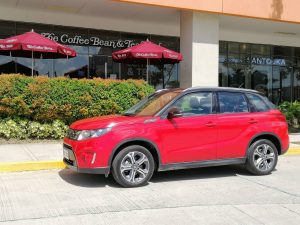 The Suzuki Vitara has been winning hearts and minds across the globe since 1988. The original Vitara became popular as a “lifestyle vehicle” – a compact sport utility vehicle (SUV) designed to fill the slot above the subcompact Suzuki Jimny. The Vitara became so popular that General Motors sold it as the Geo Tracker in the United States and as the GMC Tracker, Chevrolet Tracker, Asüna Sunrunner and Pontiac Sunrunner in Canada. It was also sold as the Santana 300 and 350 in Spain and as the Mazda Proceed Levante in Japan. The second generation Vitara was launched in 1998 while the third generation was unveiled in 2005. It was marketed as the “Grand Vitara” in both of these generations. 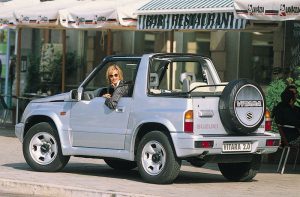 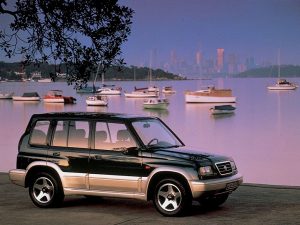 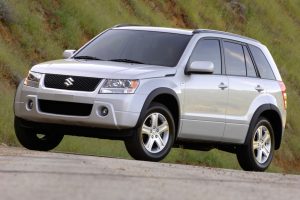 The fourth iteration of the Vitara, and the subject of our Driven review, was presented at the 2014 Paris Motor Show. It is around five inches shorter, three inches lower, and an inch and a half narrower than the previous Grand Vitara. Instead of being marketed as a compact SUV, the Vitara is now a crossover SUV, more attuned to adventures in the concrete jungle than in the wilderness. With a 2,500-millimeter (98.4-inch) wheelbase that is five and half inches shorter than the previous model, the current Vitara is more maneuverable, easier to drive on Metro Manila’s narrow roads and a lot easier to jockey into tight parking spaces. 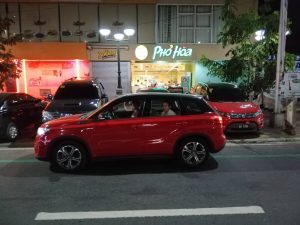 The Vitara is easy to drive around Metro Manila and to our favorite Vietnamese restaurant.

Since the Vitara has won hearts and minds for more than 30 years, we wondered if the 2019 Suzuki Vitara GLX A/T has the right stuff to win not only our hearts and minds, but our stomachs as well. We wanted to see if it can still be considered as a lifestyle vehicle, albeit befitting our dining lifestyle. After collecting our assigned two-tone media test drive unit (Bright Red body with Cosmic Black Pearl Metallic roof), we indulged in our favorite sport – eating – and drove to Stoned Steaks along Scout Rallos near Tomas Morato in Quezon City, where we got stoned, gastronomically speaking. 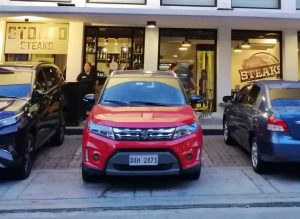 It’s easy to park in tight spaces, like among other vehicles in front of Stoned Steaks.

Along the way, we enjoyed the power and economy of the M16A 1.6-liter inline 4-cylinder engine with double overhead camshafts (DOHC), sixteen valves (16V) and variable valve timing (VVT) that produces 115 horsepower and 156 Newton-meters of torque while returning around 9.5 kilometers per liter. After our hearty dinner and wine-pairing at Stoned Steaks, we weighed a few stones heavier (pardon the pun) with all the good food we ate and the Argentinian wine we drank, but the Vitara’s performance never showed any difference. We even enjoyed a magical drive home as we admired the nighttime scenery with the large panoramic sunroof. 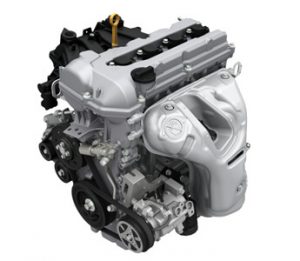 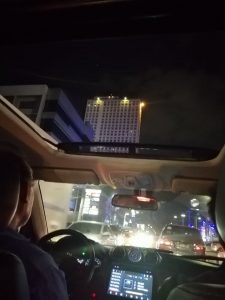 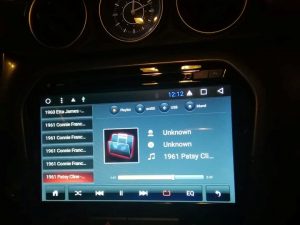 Old songs on the USB played through 6 speakers adds to the magic.

Even though our Vitara only has front wheel drive (FWD) unlike the previous generation with 4-wheel-drive (4WD) system, it still has that “go everywhere” vibe, albeit go everywhere around the city. From ritzy restaurants to hole-in-the-wall eateries, we can confidently drive our Vitara over any undulation that the city can throw at it. Its short 5.2-meter turning radius makes easy work of U-turns and tight hairpins while its 185-millimeter ground clearance and 17-inch 5-spoke alloy wheels shod in 215/55R17 Continental tires allows it to roll over ruts and potholes with aplomb. 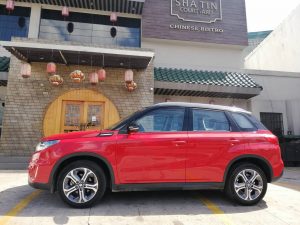 Our Vitara can easily climb up China, err… the parking lot of a Chinese restaurant… 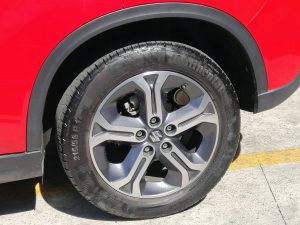 The forward half of the panoramic sunroof slides over on top of the rear portion. 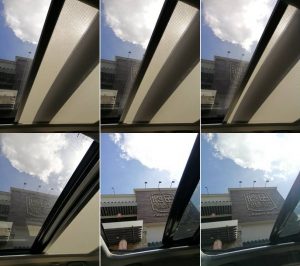 The sunroof slides back and lets the sunshine in! 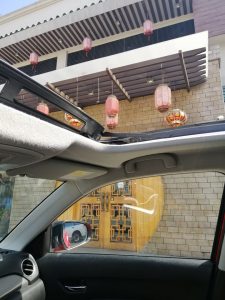 The open roof gives our Vitara the feeling of a convertible.

Suzuki Automobile Philippines quotes an 18.2° approach angle, a 28.2° departure angle, and a 17.7° ramp brake over angle for the Vitara, which may be useful to off-road enthusiasts, if it had 4WD. However, for us city slickers, we’re more concerned with rowing through the 6-speed automatic with the paddle shifters, and on how its automatic climate control system can handle the 40°C afternoon temperatures we’re currently experiencing. Sufficed to say, the Vitara is one cool and comfy cocoon. 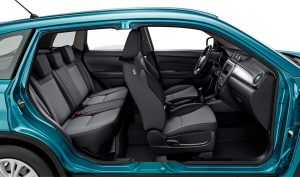 The interior is comfortable although a bit cozy… 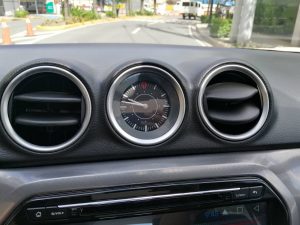 … while its automatic climate control system keeps everyone inside cool. 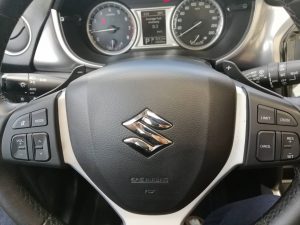 Paddle shifters, infotainment and cruise control buttons are all on the steering wheel.

Aside from being cool and comfortable, occupants are entertained with the 10-inch Android multimedia infotainment system, which includes USB and Bluetooth connectivity, navigation, six speakers, and integrated controls on the steering wheel. The large screen also serves as the reverse camera monitor. An LCD screen on the instrument panel reports about the Vitara’s instant fuel mileage, average fuel mileage, remaining fuel range, and average speed. 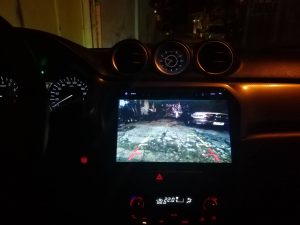 10-inch touchscreen also serves as the monitor for the reverse camera. 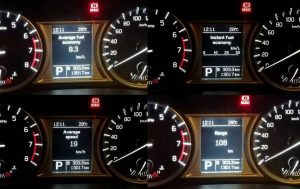 Aside from being a terrific city commuter, the Vitara never forgets that it’s a crossover SUV, with emphasis on the “U” for utility. With the rear seatback in raised position, 375 liters of luggage can be fitted inside this Suzuki. With the rear seatbacks folded, 710 liters of baggage or cargo can be carried. More importantly, a 60/40 split rear seatback allows a third passenger to sit comfortably at the backseat while minding the long and delicate cargo that’s being transported. 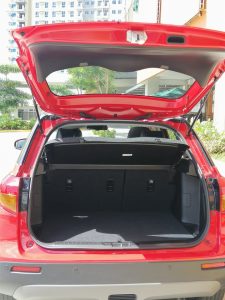 Rear hatch opens wide to swallow 375 liters of cargo with the rear seat backs up and 710 liters when the seat backs are  folded down. 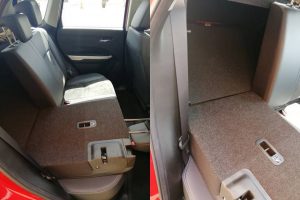 60/40 split rear seat back allows long cargo plus 1 or 2 passengers at the back. 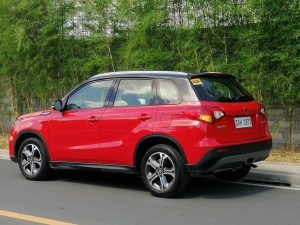 Rear quarter of the Vitara cuts a boxy yet handsome profile.

After spending a week with the Vitara, we came to the conclusion that it can still be considered as a “lifestyle vehicle” like the original. Of course, the lifestyles have changed in the past 30-odd years and so has this Suzuki. While it may have evolved from a compact SUV to a crossover SUV, the Vitara has adapted to the new urbanized lifestyle of the people of the times, since studies show that more people now live in cities than out in the countryside. It has now become more of an in-city lifestyle vehicle. 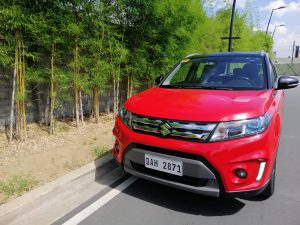 Half of the Vitara wants to go wild while the other half wants to stay urbane. 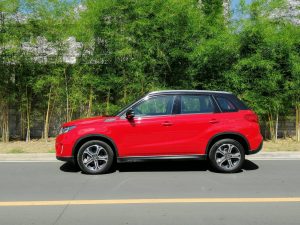 It looks cool on the outside because of the red color and feels cool inside despite the red hot sun. 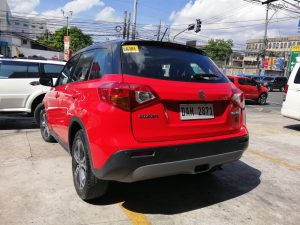 It looks like it’s ready to take on anything the metropolis can throw at it.

Thus, the 2019 Suzuki Vitara GLX A/T has far exceeded our expectations of it as an in-city restaurant-to-restaurant food trip companion. It is tough yet cool, powerful yet thrifty, svelte but spacious. Best of all, it’s fun to drive! The ride is a bit stiffer than our Suzuki Ciaz but that’s expected because it’s an SUV. If we are to “upgrade” our Ciaz, we’ll definitely trade it in for a Vitara, preferably a GLX in Bright Red with a Cosmic Black Pearl Metallic roof and a panoramic sun roof on top. I guess we may have found our ideal food trip companion! 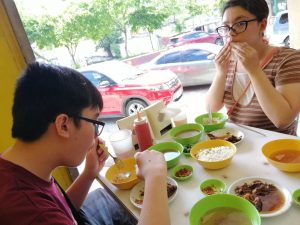 We enjoy the pares at Cocoy’s along Visayas Avenue while our red Vitara waits nearby. 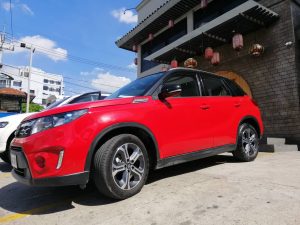 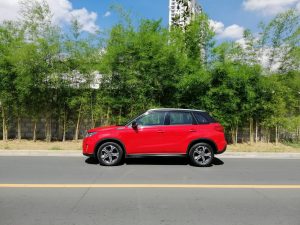