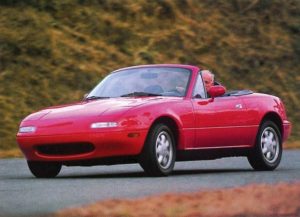 Since its global introduction at the Chicago Auto Show in February 1989, the Mazda MX-5 has endeared itself to more than a million owners around the world. Known as the Miata in the USA, the nimble and agile rear-wheel drive two-seat sports car has earned the admiration of people from various countries, cultures and age groups. With four model generations in three decades, the lightweight, top-down roadster developed by Mazda has been recognized as the Best-Selling Sports Car in the World by the Guinness World Records. After the One-Millionth MX-5 rolled out of the Hiroshima factory in 2016, it has truly established for itself a solid reputation as a driver’s favorite. 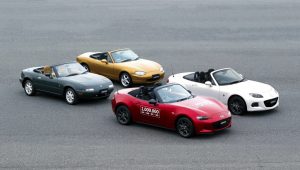 Only 30 Mazda MX-5 30th Anniversary Edition RFs will be allocated to the Philippines.

As a symbol for the Mazda brand, it is befitting to celebrate 30 Years of the MX-5’s heritage with a limited edition of the fourth-generation model. The 2019 Mazda MX-5 30th Anniversary Edition will have only 3,000 examples around the world. A unique badge showcasing the production number of each car acknowledges the limited number of this special edition model. A total of 30 are allocated to the Philippine market as the MX-5 RF Retractable Fastback. Both six-speed automatic and manual Skyactiv-Drive transmissions will be available.

Bursting in radiance with its exclusive Racing Orange color, the MX-5 30th Anniversary Edition calls to mind the sunrise as a symbol of another milestone in the MX-5’s continuing story of bringing driving joy. Splashes of orange in the front Brembo and the rear factory brake calipers signify an homage to performance that the model brings.The Racing Orange trimmings are also found in the door panels and dashboard accents, always reminding the future owner of the special nature of his ride. And with its special orange-lined Recaro sports seats, the MX-5 30th Anniversary Edition will continue to involve the driver in every movement and give him a direct feel of the true nature of his steed.

The 17-inch lightweight forged aluminum Rays wheels again hark of the performance inherent in the special edition. A special engraving on each wheel to commemorate the MX-5 30th Anniversary Edition further highlights the value of each unit. By combining strength and light weight, the MX-5’s full handling and performance potential will be realized. Set up with Bilstein dampers in all four corners for the manual transmission model, the MX-5 30th Anniversary Edition delivers a connection to the road that will surely be cherished every time the car is driven.

A new level of driving exhilaration is reached with the MX-5’s 184-metric-horsepower 2.0-liter Skyactiv-G DOHC 16-valve inline 4-cylinder engine. Revving as high as 7,500 RPM, the special edition roadster will continue to provide exceptional thrill and exhilaration whether on the track or on the road. Of course, creature comforts such as the Mazda Connect system with Apple CarPlay™ and Android Auto™ integration, together with a 9-speaker Bose® Premium sound system, will render comfort over long journeys. By combining the best technical solutions to providing a unique driving experience, the MX-5 30th Anniversary Edition promises to be the culmination of a 30-year evolution of driving pleasure. A true representation of Mazda Jinba Ittai as both driver and car come together in driving harmony.

The 30 units of the MX-5 30th Anniversary Edition will be offered at P2,990,000 each. Reserve yours now! Bermaz Auto Philippines, Inc. is the exclusive distributor of Mazda vehicles and parts in the Philippines. Its current product line-up now includes the Mazda2 sub-compact sedan and hatchback, the Mazda3 compact sedan and hatchback, the Mazda6 full-size executive sedan and sports wagon, the CX-3 freestyle crossover, the CX-5 five-seat and the CX-9 seven-seat premium crossovers, the MX-5 2-seat sports roadster and the BT-50 pickup truck. There are 21 Mazda 3S dealerships located across the Philippines.