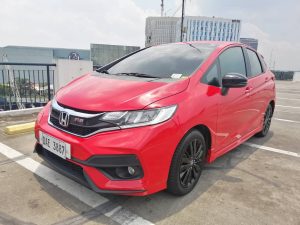 I am a big fan of the Honda Jazz. Consider that when it was introduced in 2001, the first-generation Jazz (GD-series) or Fit, as it is labelled in other markets, immediately achieved international recognition by winning Japan Car of the Year for 2001-2002 and Japan Car of the Year 30th Anniversary Special Award “Best 3rd Decade Car“; RJC Car of the Year Award 2002; Top Gear Survey 2006 Best Small Car and Second Best overall; and IGN Best of 2006 Awards Killer B-Segment Award. The second-generation Jazz/Fit (GE-series) debuted in 2007 and continued the winning streak by being in Car and Driver magazine’s Ten Best list from 2007-2013 as the Best Small Car; Greenercars.org‘s One of the Greenest Vehicles of 2007 and 2008; MotorWeek Drivers’ Choice Awards 2007 Best Small Car and Best of the Year; U.S. News & World Report Best Economy Car for 2008; Cars.com Top 10 Urban Vehicles for 2008; MotorWeek Drivers’ Choice Awards 2009 Best Small Car; Motor Trend magazine’s 2009 Car of the Year Finalist; U.S. News & World Report 2010 Best Hatchback for the Money; Consumer Reports’ Best Overall Value from 2010-2012 and Best Cars for Families Awards as the No. 1 in Affordable Small Cars. Such a huge list of awards for such a small car. 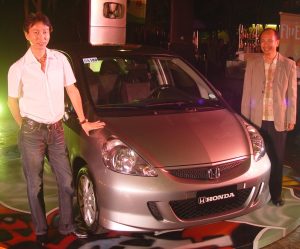 The 1st-generation Jazz (GD-series) was introduced in the Philippines in 2004 and received a minor facelift in 2006. 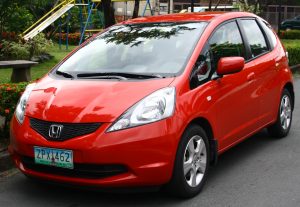 Ever since the Philippine debut of the Honda Jazz in 2004, I was enamored with the Japanese sub-compact super mini. My admiration for it grew even more when Jeff Reyes and I finished second place as Team Philippine STAR in the 2007 Petron Xtra Mile Challenge Media Edition, and again in the 2008 Petron Xtra Mile Challenge Championship Edition, where we drove 1,323.5 kilometers on a single full tank of fuel. When Honda Cars Philippines, Inc. (HCPI) deployed the Jazz 1.5 S MT to replace the Civic and City in the 2007 Honda Media Challenge gymkhana races, my admiration for it became even stronger. I joined the celebration when Honda announced that more than 5 million Jazz/Fit units were sold around the world in 2012. That’s why I’m such a huge fan. 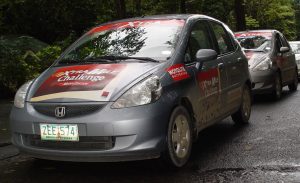 A Jazz GD 1.3 A/T took us to a 2nd place finish in the Petron Xtra Mile Challenge Media Edition in January 2007. 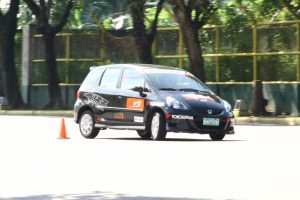 The Jazz GD 1.5 M/T was a great gymkhana racer in the Honda Media Challenge in October 2007. 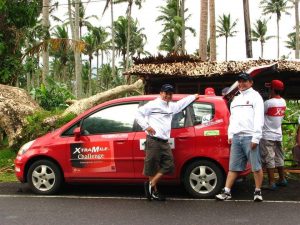 Jeff Reyes and the author drove 1,323.5 kilometers on a single full tank of gas to another 2nd place finish with the Jazz GD 1.3 A/T in the Petron Xtra Mile Challenge Championship Edition in January 2008.

Getting a Jazzed-up 3rd Generation Jazz

When HCPI asked me if I’d like to test drive a third-generation Jazz (GK-series), their top-of-the-line 2019 Honda Jazz 1.5 RS Navi CVT, I immediately jumped at the chance. The RS Navi CVT, as the name implies, is the upmarket Rally Sport (RS) version of the Jazz equipped with a satellite navigation system, a continuously variable transmission (CVT), and body enhancements such as a special front grille, bumper and air-dam spoiler, side rocker panels, rear roof-mounted spoiler, rear bumper with lower air diffuser that are exclusive to the model. Our good friends at HCPI sent their Jazz 1.5 RS finished in a bright hue of Rally Red  that contrasts with the gloss black 15-spoke 16-inch aluminum alloy wheels shod with 185/55R16 Bridgestone Turanza tires. Just being around this “Hot Hatch/Boy Racer” made us feel 20 years younger. 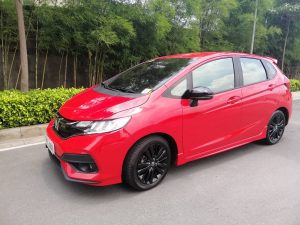 We got our hands on a sporty 1.5-liter Jazz RS that had exclusive body enhancements and a bright Rally Red paint finish. 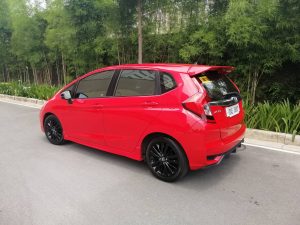 … especially with the roof-mounted spoiler and the rear bumper diffuser, 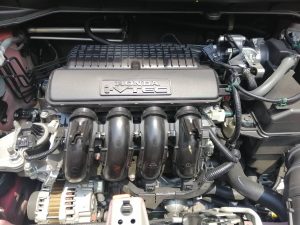 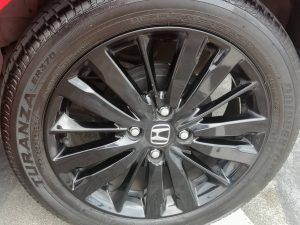 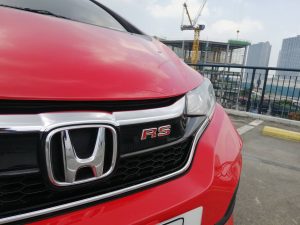 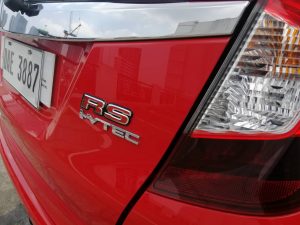 … while RS badges were fitted to differentiate it from the other Jazz 1.5-liter variants.

As you would expect, the interior of our Jazz 1.5 RS is jazzed-up as much as the exterior. The leather portions of the seats, steering wheel, and shift knob feature red stitching, which matches the red finish of our car. The seats are ergonomically designed for long-distance comfort as well as for occasionally attacking the curves while the leather-wrapped 3-spoke steering wheel provides a firm grip for maneuvering the EPS electrically-assisted rack and pinion steering system. Remote controls for the infotainment system and the cruise control reside at the steering wheel spokes while paddle shifters for the 7-speed CVT are found behind. The touch screen infotainment system features USB and Bluetooth connectivity and satellite navigation while convenience features include smart key w/push start/stop button, automatic climate control, and center console with armrest. A green ECON button helps you drive with increased fuel economy while the sporty instrument panel illumination makes you want to go faster. 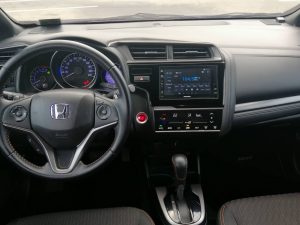 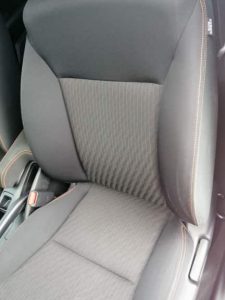 … and sits on supportive seats with side bolsters and red-stitching. 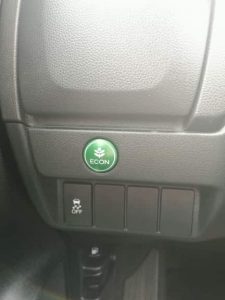 That little green ECON button to the left of the driver… 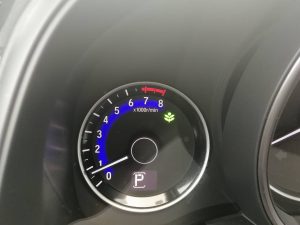 For safety, our Jazz 1.5 RS features hill start assist (HSA), vehicle stability assist (VSA), side mirrors with turning lights, emergency stop signal (ESS) and side-curtain airbags. And of course, the Jazz is renowned for its innovative Magic Seating interior arrangement with its Utility, Long, Tall and Refresh modes. This is the feature that attracted me to the Jazz in the first place. I’m just glad that the Honda engineers and designers continued to incorporate this feature into the current version.

The trademark “Magic Seating” of the Jazz is adaptable to any cargo by simply folding the seats in various configurations. 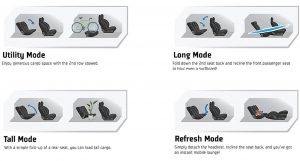 The instructions for adjusting the interior to Utility, Long, Tall and Refresh modes are easy to follow. 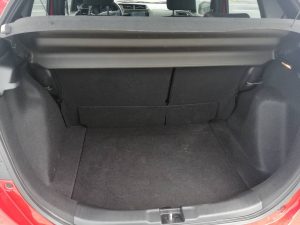 With the seats up, the rear compartment can accommodate 384 liters of luggage and stuff. 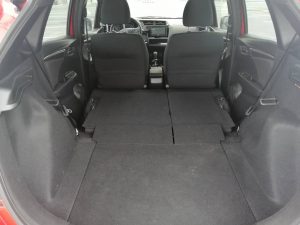 … with the back seat backs folded, the Utility mode can accommodate a mountain bike without removing its front wheel.

We had the Jazz 1.5 RS for an entire week and we enjoyed driving it around the busy and crowded confines of our metropolis. It feels responsive, quick and lithe, and as an RS, it feels racy when driven in Sport mode, where the CVT gears are held longer to squeeze the maximum power out of the 1.5-liter iVTEC. Driven with mature civility, the Jazz 1.5 RS can return more than the 9.8 kilometers per liter we achieved during our week-long city drive, but we found it a bit difficult to be mature when we’re inside a red-hot boy racer hot hatch. Giving in to our inner Speed Racer felt extremely satisfying although we wished for a little more grip (perhaps 195/55R16 Turanza tires instead of the factory-installed 185mm Bridgestones) and a little more oomph (118 hp isn’t what it used to be). If I will be confined to having just one car as my personal car and our family car, the 2019 Honda Jazz 1.5 RS Navi CVT will be on top of my list. After all, I am a big Honda Jazz fan. 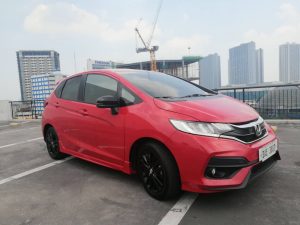 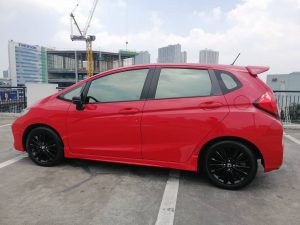 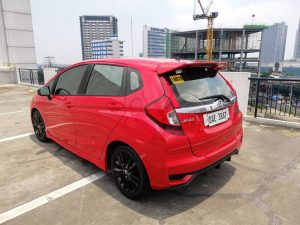