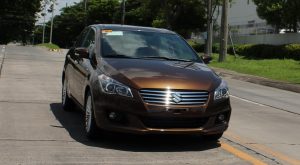 It’s hard to believe that our Power Wheels Magazine Long Term Test 2016 Suzuki Ciaz 1.4 GLX A/T is now more than two years old. It seems like only yesterday that we picked it up from the Suzuki Philippines, Inc. (SPH) factory in Canlubang, Laguna. After an informal but fun “vehicle turn-over” ceremonies, we got the keys of our brand-new car from SPH Managing Director Norminio “Boying” Mojica on a balmy Monday afternoon, July 25, 2016. 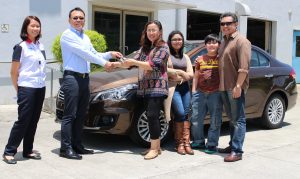 We drove our Prime Dignity Brown Ciaz mostly around the metropolis with some occasional out-of-town jaunts, mostly to Clark, Pampanga to attend to some business matters. To date, it has traveled over 31,000 kilometers, most of it crawling around Manila’s horrendous traffic. When it was new, we recorded an average fuel mileage of 7.56 kilometers per liter but we were able to improve to around 9.0 km/liter just by driving less aggressively, planning our trips more carefully, and learning to use the “Auto” feature of the Ciaz’s climate control system.

Immediately after we got it, we had our Ciaz coated with Meguiar’s Mirror Glaze Deep Crystal Coat M188 premium long-lasting paint protection system. We always took it to the service workshop of a Suzuki dealership when it was time for its periodic maintenance service (PMS). We took good care of it and we never had any problem with it until recently when the battery needed to be replaced. 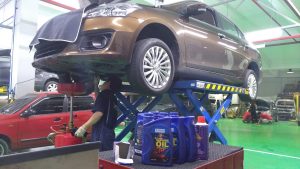 At around 30,250 kilometers, our car’s original factory-installed GS battery was beginning to discharge regularly and give off a weak charge. We had two incidents when we couldn’t unlock the doors with the hands-free keyless entry system and get into the car because the battery just went dead. Luckily, Suzuki engineers designed a hidden key into the fob which can be used to manually unlock the driver’s side door in cases like these. However, since there was no power, we couldn’t operate the electric trunk release to get the tools from the back. Luckily, in both cases, we had access to a booster/charger to supply some 12-volt juice to start the car. Strangely, the battery worked fine afterwards. 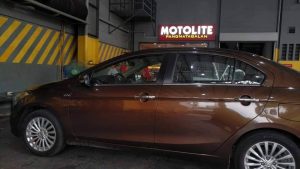 We decided that we won’t wait for a third incident. We went to the Motolite Battery Center at the corner of España Boulevard and Maceda Street in Sampaloc, Manila, and had a new Motolite Gold 2SNF car battery replace the old one. The technicians thoroughly cleaned the battery connectors and then checked our Ciaz’s charging system just to make sure that our alternator was working properly. After completing their tests and finding our Ciaz’s electrical charging system in top nick, we were sent on our merry way. 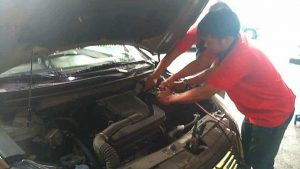 Motolite technicians check our old battery before installing a new one. 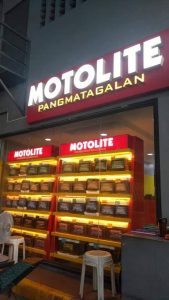 They have a range of Motolite car batteries in stock. 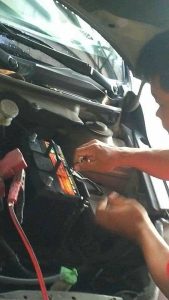 After the new Motolite battery was installed, we realized that the 195/55R16 Bridgestone Ecopia EP-150 tires of our Ciaz are as old as the discarded GS battery. While we always had the car serviced at the dealership during its prerequisite PMS, we always assumed that the casa service included checking and rotating the tires. We try to see to it that we inspect the tires ourselves when we check the air pressure and so far, we have found no uneven wear or sidewall cracks on all four tires. But, it’s better to be safe than sorry. 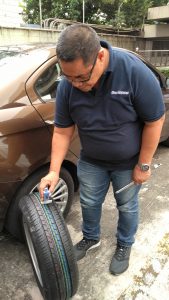 So, after the mad Christmas rush, we drove our Ciaz to the Bridgestone main office along Chino Roces Extension in Makati to get their expert opinion. Bridgestone tire expert Cesar Soque inspected our tires with a pressure gauge and found that there was only 25 psi in all our tires, which was a bit lower than the 30-psi recommended by the factory. He advised us to maintain the correct tire pressure because under inflation (below 30 psi) will cause premature tire wear and excessive fuel consumption while over inflation (above 33 psi) will cause tire damage and an uncomfortable ride. 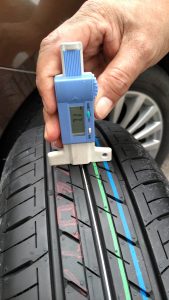 Cesar then used a digital tire thread depth gauge to measure the thread wear of our tires. He measured the thread depth of a brand-new unused Ecopia EP-150 (our spare tire) and found it to be 7.1 millimeters. He then measured the tires of our Ciaz and found the front ones at 5.0 mm and the rear ones at 6.1 mm. He concluded that our tires were still in good condition although we should have them rotated. 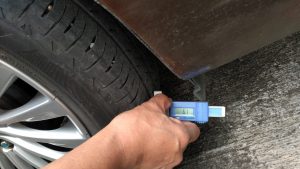 The front tires wear out faster in a front-wheel-drive (FWD) car because they handle the power delivery, steering direction, and heavy braking forces while the rear tires just coast with little stress being forced on the rubber. He also advised us to include the spare tire in the tire rotation process every six months after he saw that it was still unused despite being mounted on March 12, 2016. 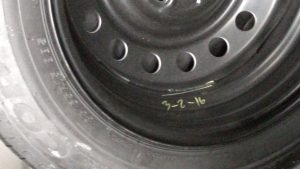 A Little Bit of Math 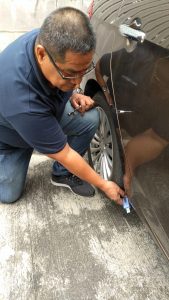 Additionally, we can say that we only wore out a small fraction of the rubber – 0.000063 mm in front and 0.000031 mm at the back – for every kilometer that our Ciaz is driven. That’s scrubbing only around 0.0023 mm of the front tires and 0.0011 mm of the rear ones every day we use the car. All these very small, miniscule numbers mean that the tires will be good for another 5 years or more, especially now that we know why we should rotate them and keep them correctly inflated. 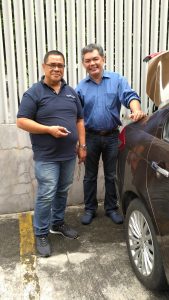 We’re glad that Suzuki Philippines decided to equip the Suzuki Ciaz with Bridgestone tires as original equipment (OEM) because they are safe, durable and dependable despite being a bit more expensive. Furthermore, besides being economical with fuel, our 2016 Suzuki Ciaz 1.4 GLX A/T is also economical with maintenance. We love it even more! 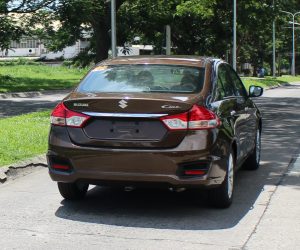