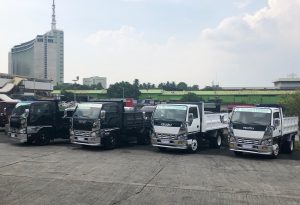 In an effort to generate the much needed attention to their unheralded industry, the Used Trucks Rebuilders and Importers Association of the Philippines (UTRIP) mounted the very first UTRIP Rebuilt Truck Show at the Metrotent in Metrowalk, Ortigas Center, Pasig last May 17 to 18, 2019. The show displayed more than 30 rebuilt trucks including work machines from  G-Technica, GLC, Solid Machineries, Pioneer Trucks, Megaton, Mana Diesel, Firewolf and Max Edge Industrial Corp. to name a few. 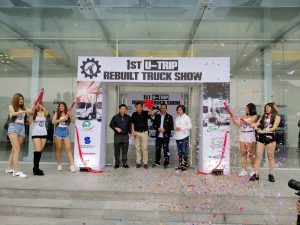 UTRIP is an association of 25 companies that operate used truck rebuilding centers within Metro Manila. It is under the umbrella of the Confederation of Truck Rebuilders and Importers Association of the Philippines (CTRIP), which is composed of close to 300 truck rebuilding companies around the country and employs about 50,000 highly-skilled production line workers. The association fears that the operations of their members in rebuilding used trucks may have only up to June 30, 2019 because of the new impositions by the government that are almost impossible to comply with. 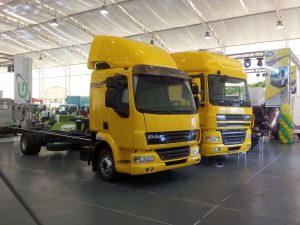 Dutch DAF trucks are imported and rebuilt by Pioneer Trucks.

In opening the show, UTRIP President Jaime Vicente said, “It is the kind of industry where we were vigorously encouraged to invest into by the government shortly after its introduction 17 years ago. Our pioneering members obliged in the advent of the implementation of Executive Order No. 156, better known as the ‘Comprehensive Industrial Policy and Directions for the Motor Vehicle Development Program‘ issued in 2002.” 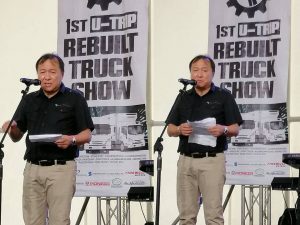 Over those years, UTRIP has played a vital and principal role in transforming the truck rebuilding industry from a collection of small-scale backyard operations to a full-blown 100-percent Filipino-owned and Filipino-controlled sector within the Philippine automotive industry. The used truck rebuilding industry has generated billions of pesos in investments, provided employment for tens of thousands of direct-hire workers, and have provided technical skills related to automotive production, assembly, maintenance, and trouble shooting. “The rebuilt used truck industry was conceptualize by the government in 2003, nourished and reared within the parameters set forth by a program it conceived and propagated.  We have not asked for nor were we given incentives other than what was originally offered to us,” said Vicente. 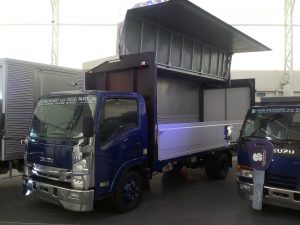 In July 2018, DTI-FTEB required the submission of Emission Test Results of rebuilt/imported used trucks from their countries of origin as proof that these trucks have passed the Euro 4 Standard before a Certificate of Authority to Import (CAI) covering an imported used truck can be issued. In response to the new requirement, a series of dialogues were held between CTRIP, BOI and DTI-FTEB, where it was determined that obtaining the required Emission Test Results of Completely Knocked Down (CKD) or fully disassembled used trucks would be impossible. 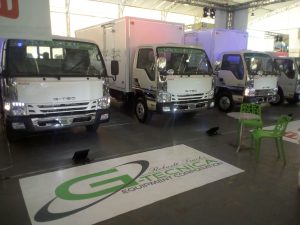 In the absence of the Emission Tests Results from the country of origin, the DTI-FTEB ruled that the only alternative is to accept an Emission Test conducted by a domestic testing center duly accredited by the Land Transportation Office (LTO). However, without a CAI, CKD used trucks can only be unloaded inside Freeport Economic Zones since these zones are still considered as foreign territory. Moreover, truck rebuilders operating outside of the Freeport Zones cannot avail of the services of domestic testing center because Bureau of Customs (BoC) regulations stipulate that imported used CKD trucks, which do not have CAIs upon discharge from a carrying vessel, are subject to immediate seizure. This quandary places the UTRIP members in a Catch-22 predicament. 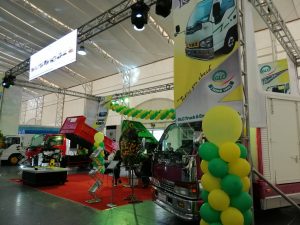 GLC Trucks & Equipments had a rebuilt diesel engine displayed with their rebuilt trucks.

“If rebuilders are required to import only CKD trucks that have passed government standards, then what is there for us to rebuild?” asked Vicente. “Isn’t this imposition utterly inconsistent with the very provision of Section 2a of DAO 08-03, which capsulizes the program ‘to assure the public that all rebuilt trucks are safe and roadworthy and meet the standards of exhaust emission’ and Section 2b ‘to develop technical and management expertise in truck rebuilding to pave the way for rebuilding programs covering other types of vehicles’?” 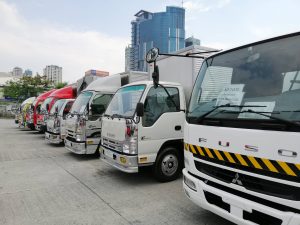 In mounting the rebuilt truck show, UTRIP would like to reiterate that they are responsible and safety-conscious used truck rebuilders, who import CKD trucks from Japan, Europe and the US, and transform them into Completely Built Units (CBUs). In the process, truck parts and components that need replacing in the engine, transmission, suspension, brakes, as well as electrically-controlled components such as headlights, signal lights, tail lights, wipers, horns, GPS, and  are replaced with new parts and components. New tires are also fitted and the finished product are comparable with a brand new unit, or even better. 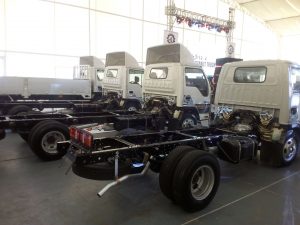 The frames of these rebuilt trucks were meticulously refurbished… 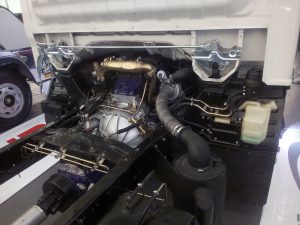 … the diesel engines were restored to better-than-new conditions…

… their fuel tanks were restored or replaced when necessary… 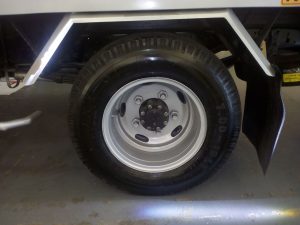 … and brand-new truck tires were installed to provide a like-new performance.

UTRIP hopes the government will consider creating a new classification for rebuilt trucks that is distinct from brand new or used units, as well as provide due consideration in every policy decision made in the future. They are also hopeful that, until such time that a judicious resolution of this matter is reached, the DTI-FTEB resume the issuance of CAIs applied for by duly accredited rebuilders, regardless of whether their rebuilding sites are inside or outside of Freeport Zones.

A Pikachu monster truck provided a colorful playfulness to the show… 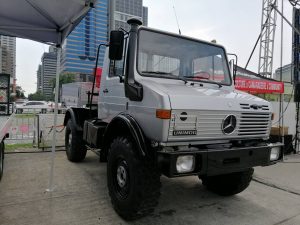 … while a restored Mercedes-Benz Unimog 4×4 truck added some vintage rarity. 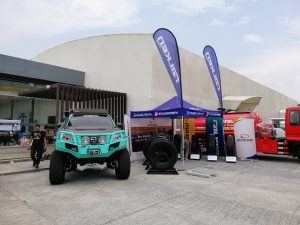 Vicente proudly remarked, “Our rebuilt trucks are amazingly priced at 30 to 50 percent cheaper than the suggested retail price (SRP) of brand-new counterpart trucks. Much like parents presenting their debutante daughter to the society, we seek to finally place the importance of rebuilt trucks into the public consciousness. Our products are tools for nation building in general and most especially one we Filipinos could proudly proclaim as our own.” 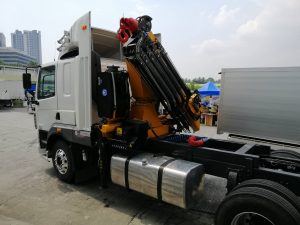 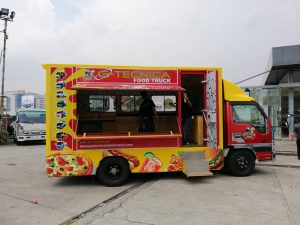 … while G-Technica had their “Express Gourmet” food truck. 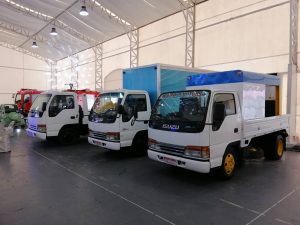 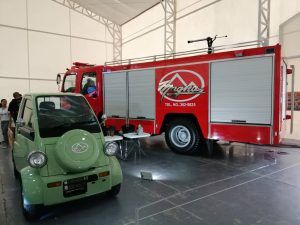 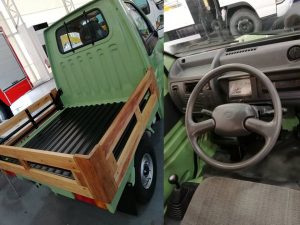 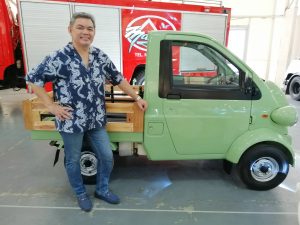 We cannot help but pose with the small cute green truck.