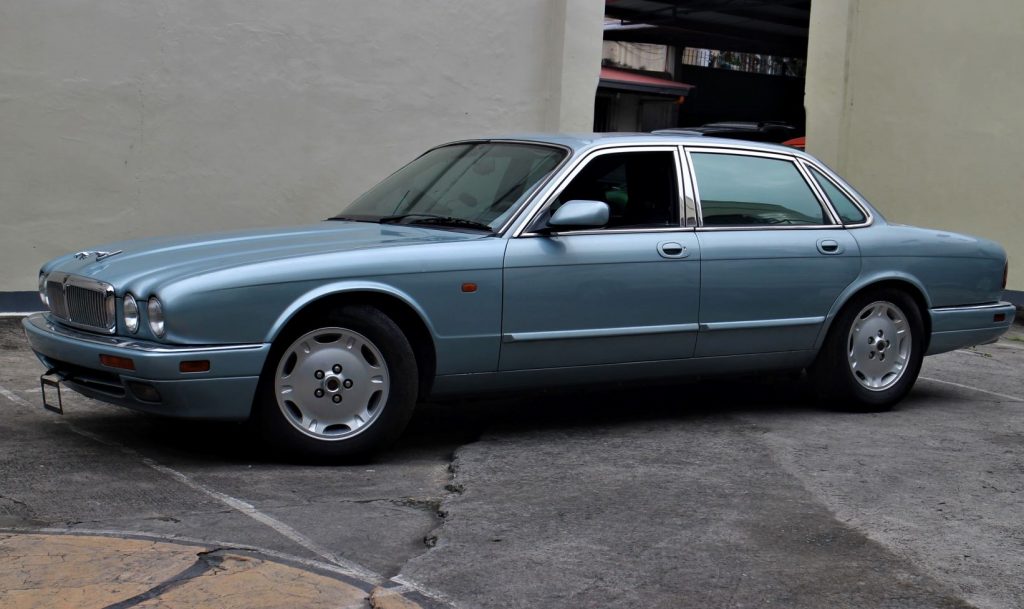 It has been two months since we got our 1995 Jaguar XJ6 Power Wheels Magazine project car that we found abandoned behind a building in Parañaque. So far, we’ve washed the car, repaired the front grille, reattached the Leaper hood ornament, repaired some of the wires and hoses that were chewed by rats, had the gas tank cleaned and checked for leaks, and got the 4.0-liter twin-cam 24-valve inline-6 AJ16 engine running after replacing the old Amaron car battery with a new INCOE MF-N100L maintenance-free car battery mounted at the trunk. 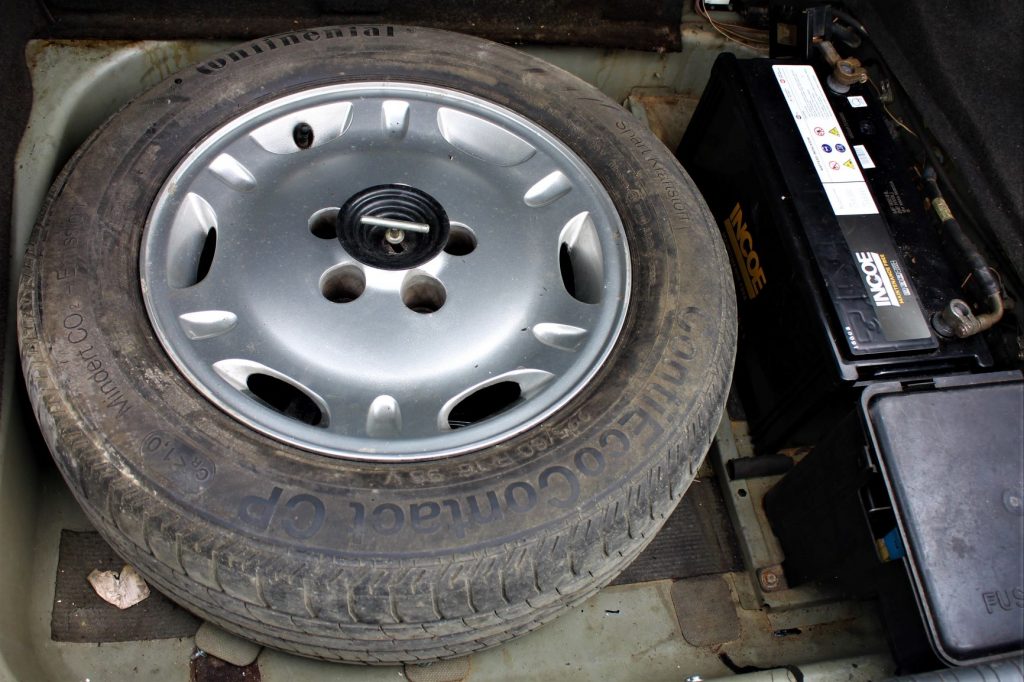 We’ve only driven the car just back-and-forth around the parking compound of the JSK Custom Paint and Auto Works garage because we still need to have the drivetrain thoroughly checked. We reckon that we need to change the engine oil and the automatic transmission fluid since the car was sidelined for almost four years. Also, with the odometer reading at 155,098 kilometers, we know that we need to replace the timing chain soon, which the Jaguar factory recommends at 100,000 miles or 160,000 kilometers. 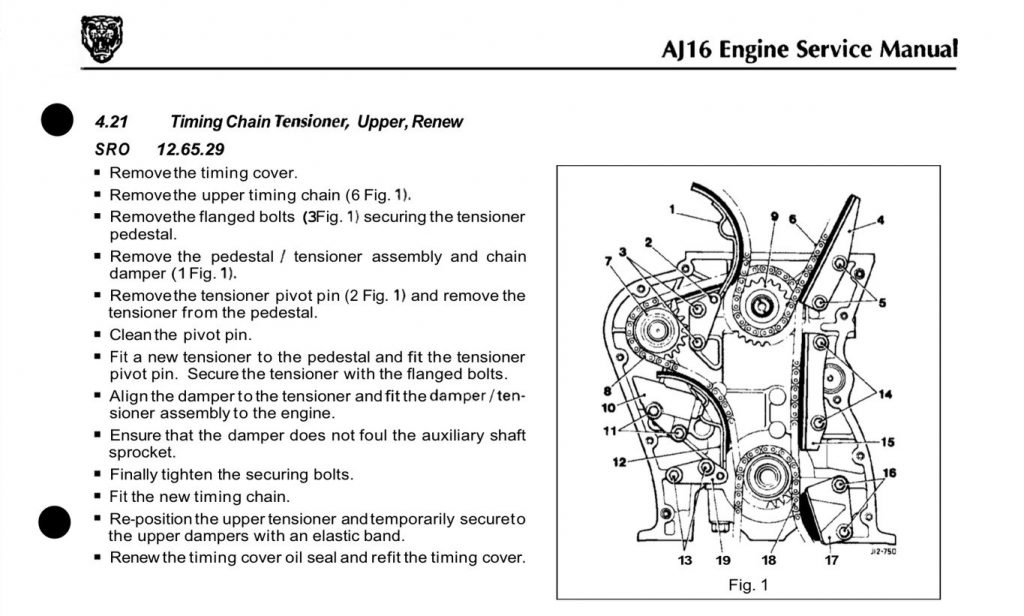 A good friend from the American muscle car club called our attention about our latest project car. He said that we’ve “strayed” from our classic car path by taking on the restoration of this Jaguar from the ’90s. We told him that our car is a “modern-classic” and a direct descendant of a more-than-half-a-century line of powerful British luxury cars. Despite the lack of finances, Sir William Lyons, the chairman and founder of Jaguar, wanted to produce a proper, low-slung sporting saloon with a twin-cam inline-6 that his company has been famous for since before World War II. In 1968, the very first XJ6 – which stands for Xperimental Jaguar 6-cylinder – was launched and it took Great Britain by storm. 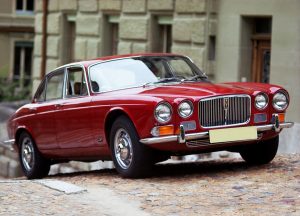 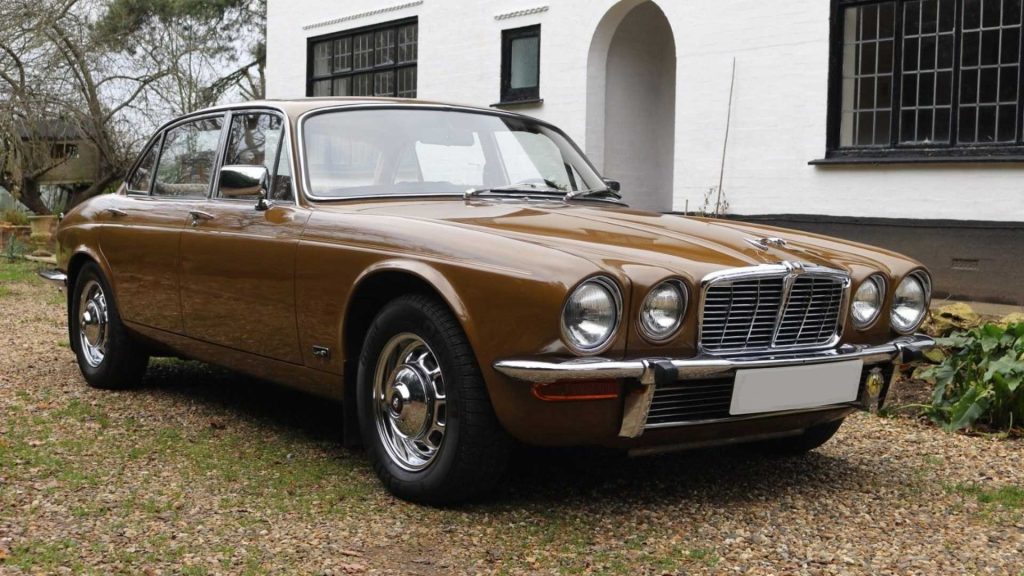 A minor refresh was done in 1973 that lifted the bumper height of the Series II to meet American federal regulations, which also resulted in a redesigned front grille and facade. In 1979, the XJ6 was modernized a little bit to keep up with the times. It became even more popular when a British Racing Green Series III was featured as the preferred ride of gentleman crime-fighter and ex-MI5 operative Robert McCall (played by the English actor Edward Woodward) in the popular TV series “The Equalizer“. In 1992, Jaguar thoroughly modernized the XJ6 with the XJ40, which was the last model approved by Lyons, along with its all-new AJ6 twin-cam inline-6 engine. 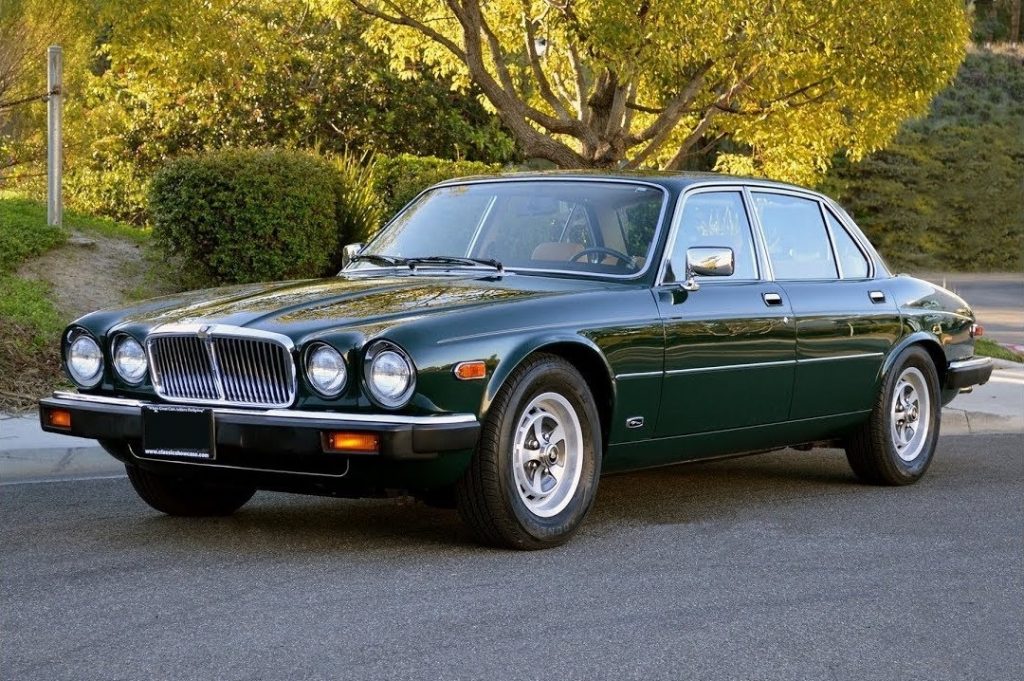 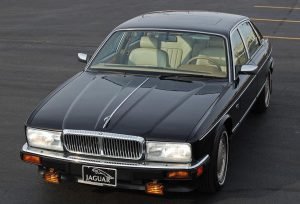 In 1989, the Ford Motor Company acquired shares in the Jaguar brand and by the early ’90s, Ford was helping improve the manufacturing processes and production quality at the Coventry factory. At the time, Ford was in a state of “retro-design flux” and influenced Jaguar to return the XJ6 to its tradition styling with four headlights and hood line that follows the contours of the headlight nacelles. To minimize costs, Jaguar shared the platform of the XJ40 but managed to make the new car look significantly different from its predecessor. The result was the 1994-1996 X300 model line, where our project car belongs to, which is the last XJ6 with the twin-cam 24-valve inline-6. The succeeding Jaguar XJ models shared components from Ford’s parts bin including the V8 engine. 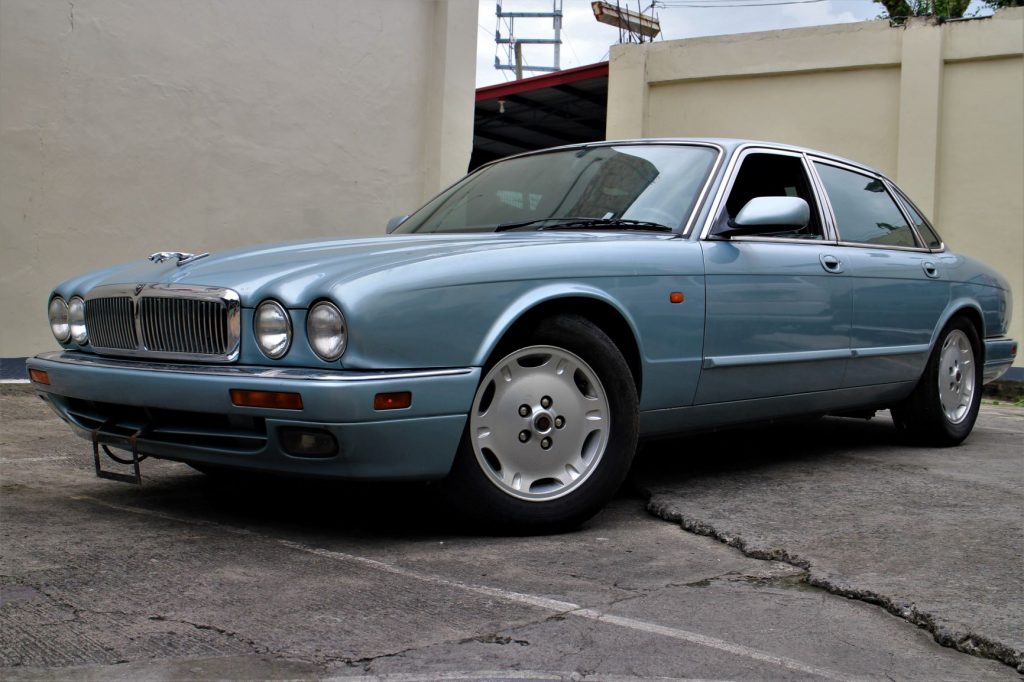 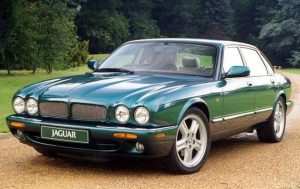 Meanwhile, some of our friends in the classic car community are telling us that restoring an old Jaguar is not going to be easy or cheap. They even warned us that our XJ6 will turn into a “money pit” and it won’t be worth the time and effort that we will put into it. We always answer with a confident smile and just ask, “How can we go wrong with a P50,000 Jaguar?” Of course, there’s a lot of things that can go wrong with a cheap project car but we did our research before we got into this X300, thanks to our extensive library of books, magazines and other automotive literature. Add to that a healthy online community of Jaguar owners in other countries, and we’re confident we can get our British luxury saloon back on the road and in good nick in no time at all. 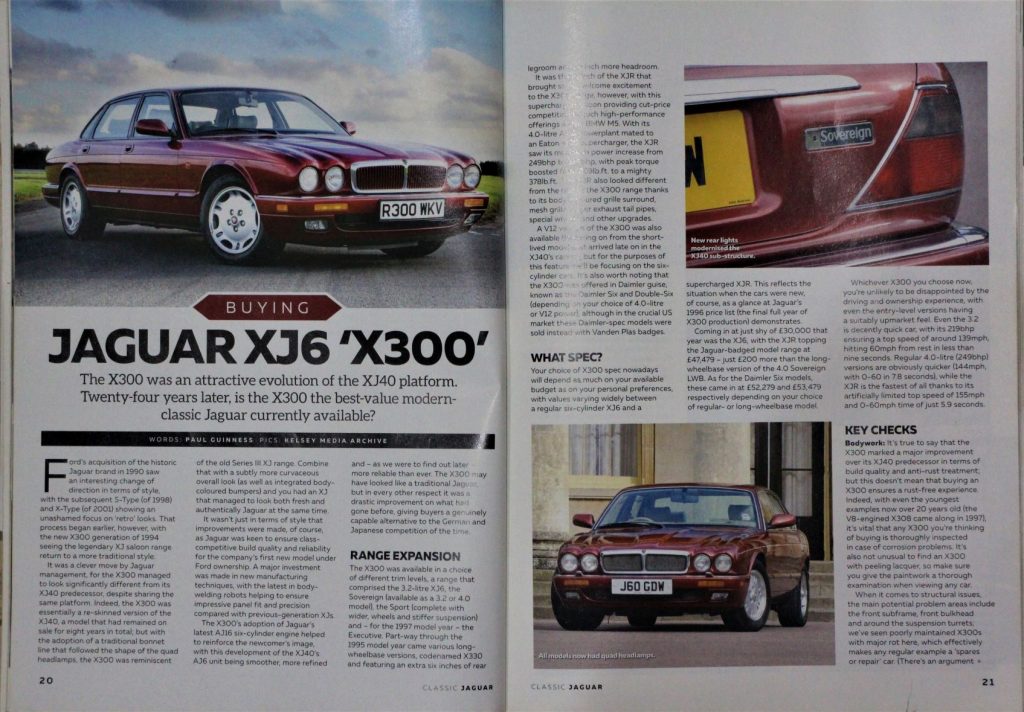 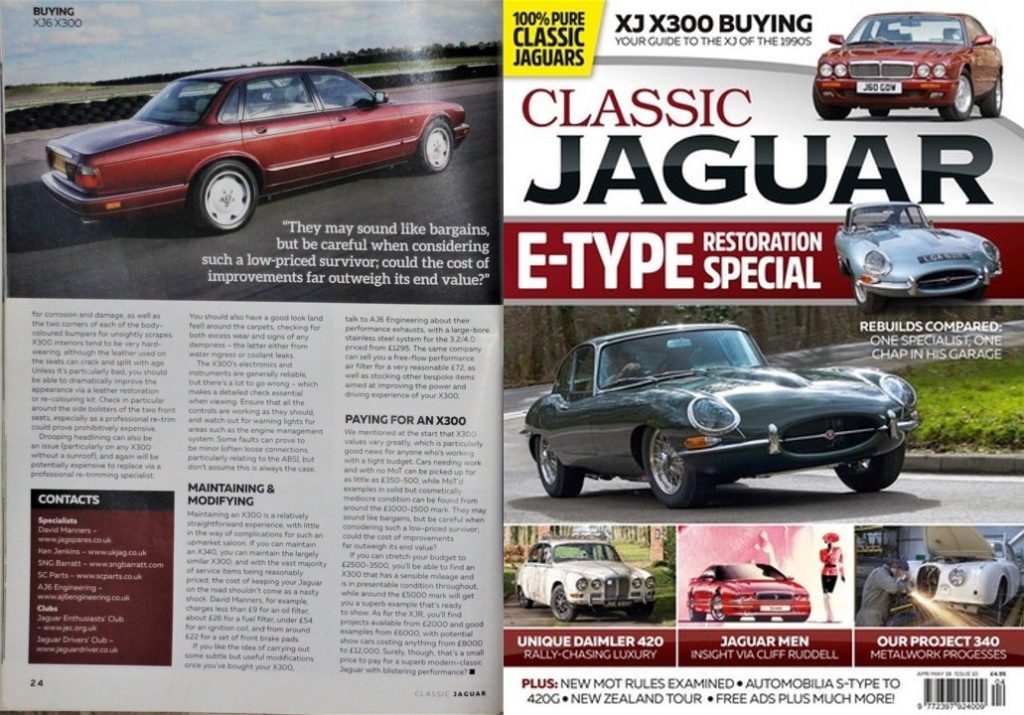 With the the engine now running, we can take a look at all the warning lights glowing in the instrument panel. The simple ones are relatively easy to fix: The windshield washer reservoir is empty and needs to be filled; the fuel level is low and we need to gas up; and the brake fluid level warning light was on, even with the reservoir full, because the sensor wire was disconnected after being chewed on by rats. We can only guess that we need to check and clean the wheel sensors so we can turn the anti-lock braking system (ABS) warning light off and that we need to check and top all the vital fluids to reset the warning messages on the green LCD screen below the tachometer and speedometer. 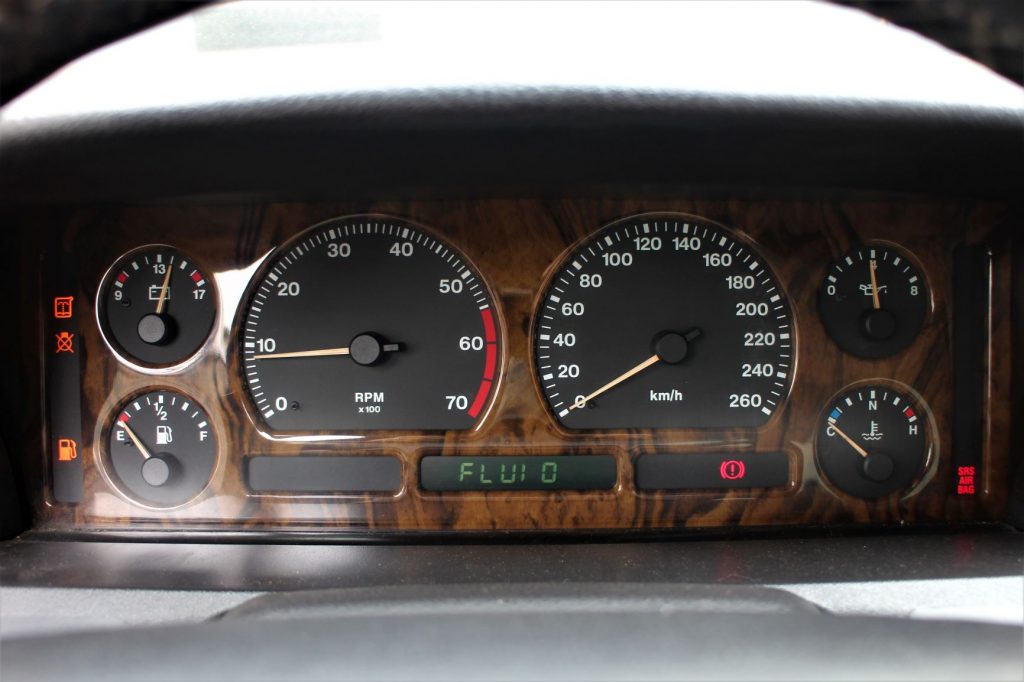 Some warning lights need to be addressed before we can drive our XJ6 on the road. 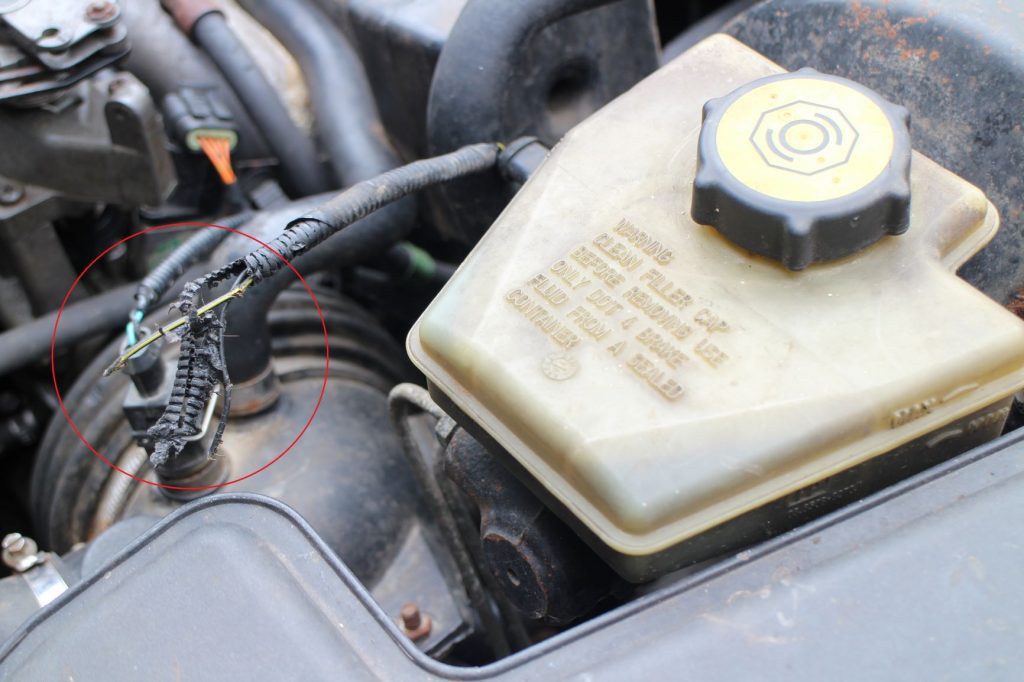 The brake fluid level warning light was on even with the reservoir full because the sensor wire was chewed by rats.

Then, there’s the matter of arresting rust before it spreads further. We saw some rust under the doors, around the lower sills, and in the engine bay when we first inspected the car on December 17, 2020. However, after we washed the car after we had it towed to the JSK compound, we realized that some rusted areas need to be addressed immediately to prevent the rust from spreading further. Johnson Tan, the proprietor of JSK, suggested to have the rusty areas sanded down and painted with a rust inhibitor as a temporary measure before we decide to have the paint finished refurbished or have our Jag undergo a paint washover. 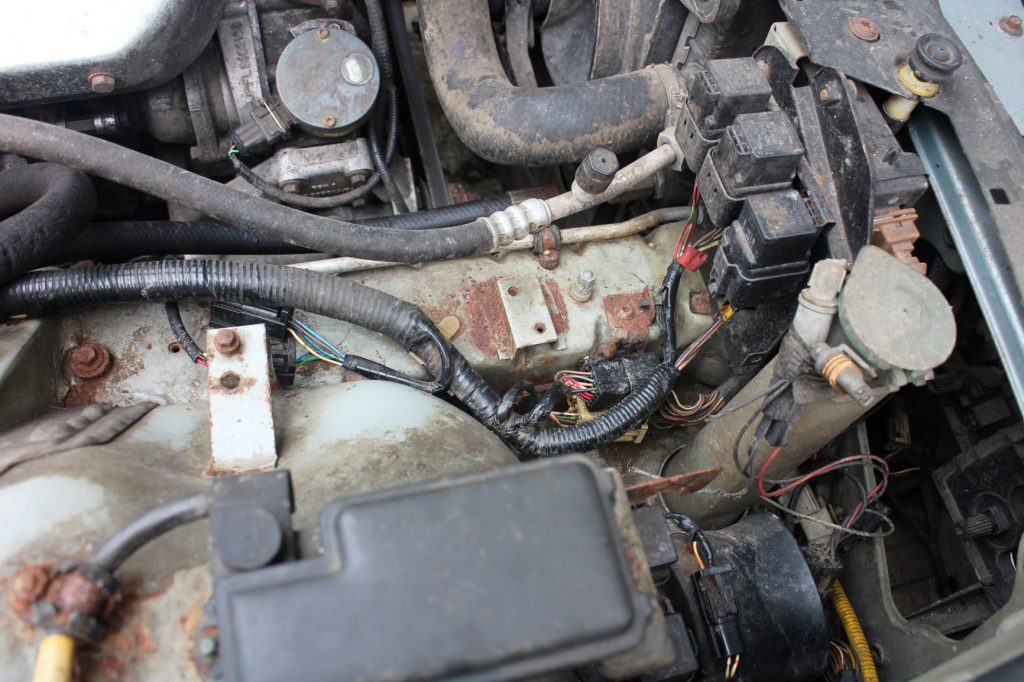 Besides repairing the wires and rubber hoses chewed by rats, we also need to remove the rust forming in the engine bay… 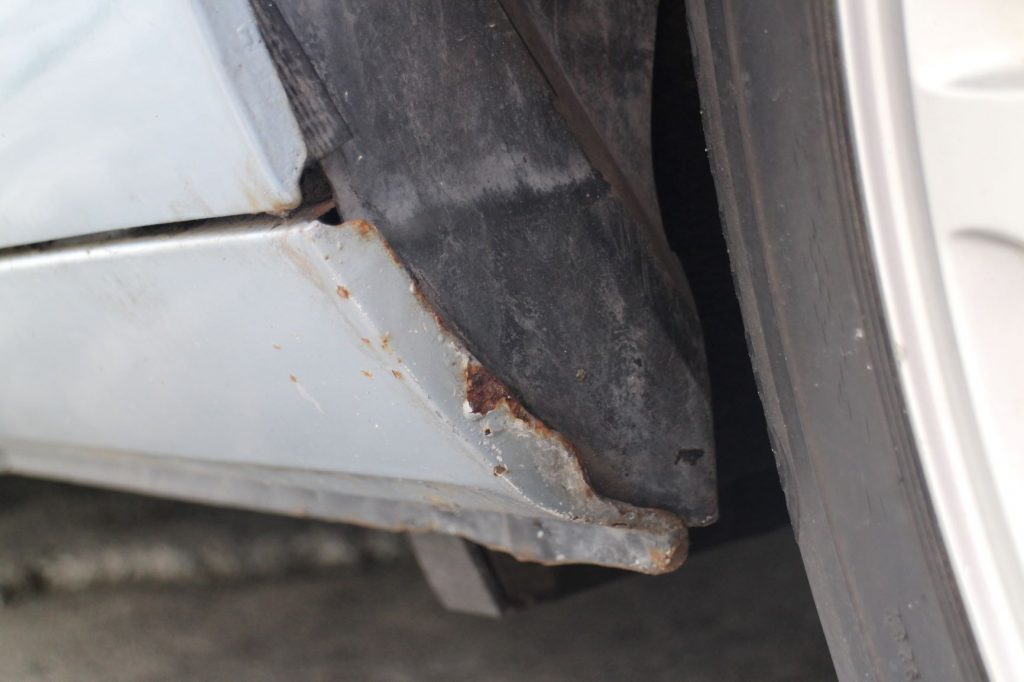 …at the edges of the lower sills (or rocker panels)… 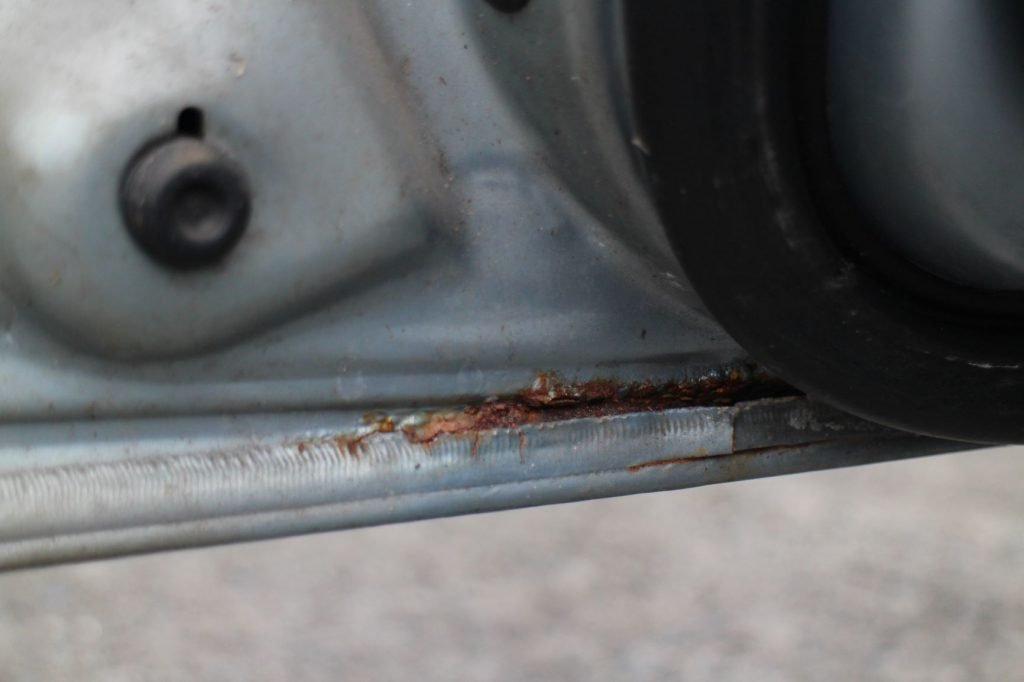 … and at the bottom of the doors.

With a fresh and strong electric power source, we checked our Jag’s power features and found a couple of things that need to be repaired. The low beam headlights don’t switch on (need to check the fuses and relays); the left side front signal light doesn’t work (need to replace the bulbs); both of the power mirrors don’t work (need to check the switches, relays and wires); the front passenger seat backrest reclines but won’t move forward (check motor switch or connections), and the aircon blows warm air and a lot of debris (needs a checkup and cleaning). Thankfully, all four power windows work seamlessly as do all the four power door locks. 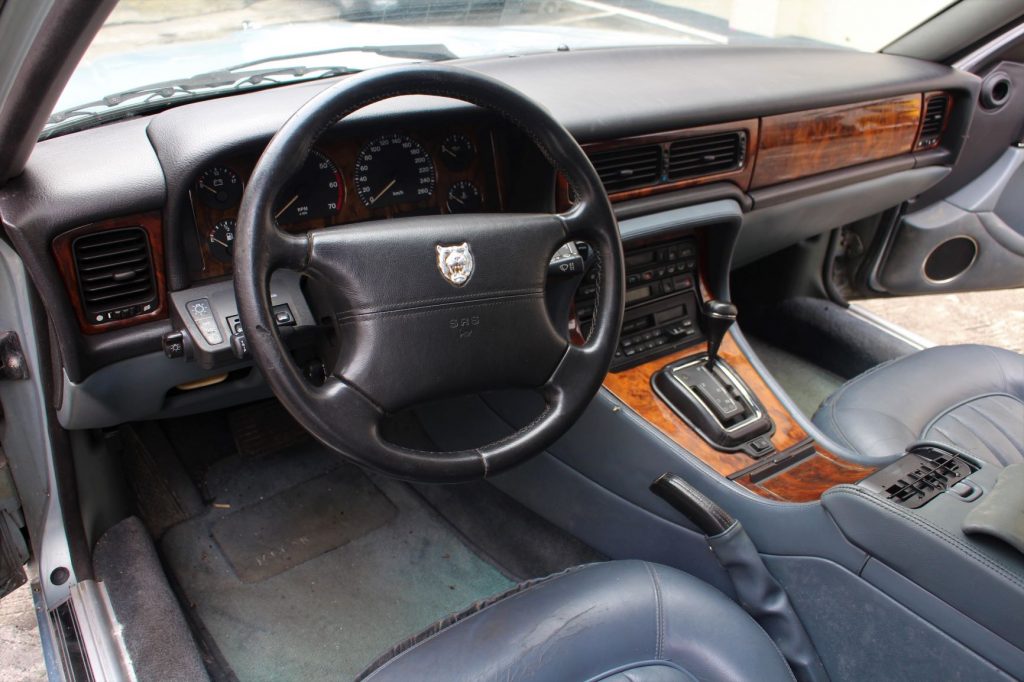 The interior is a bit cleaner now after the repair activities around the car has started. We need to check all the switches if they work. 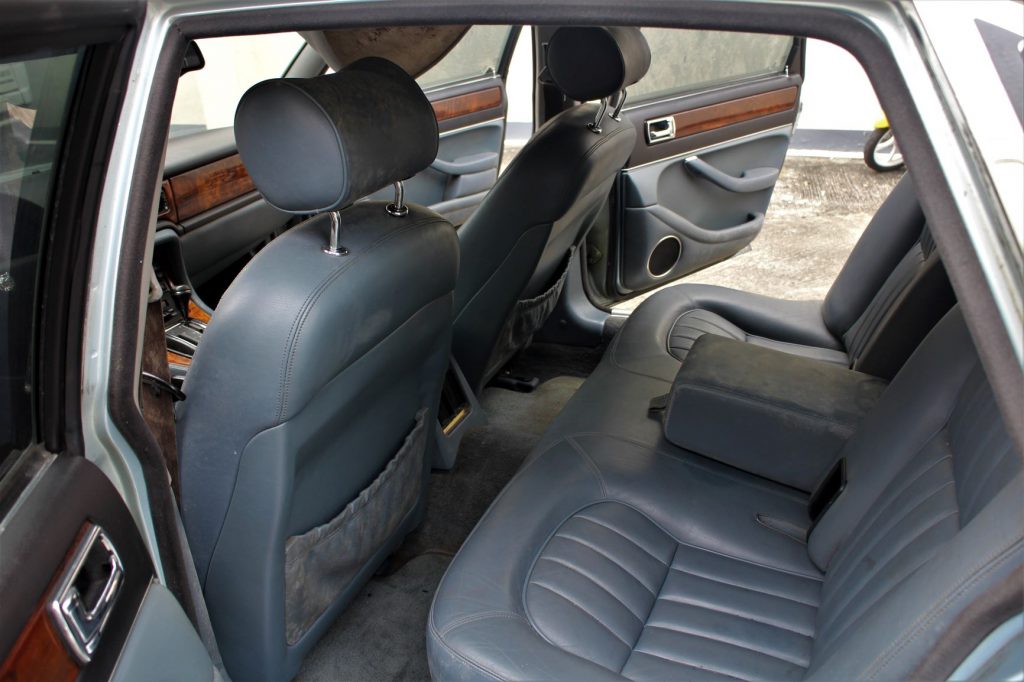 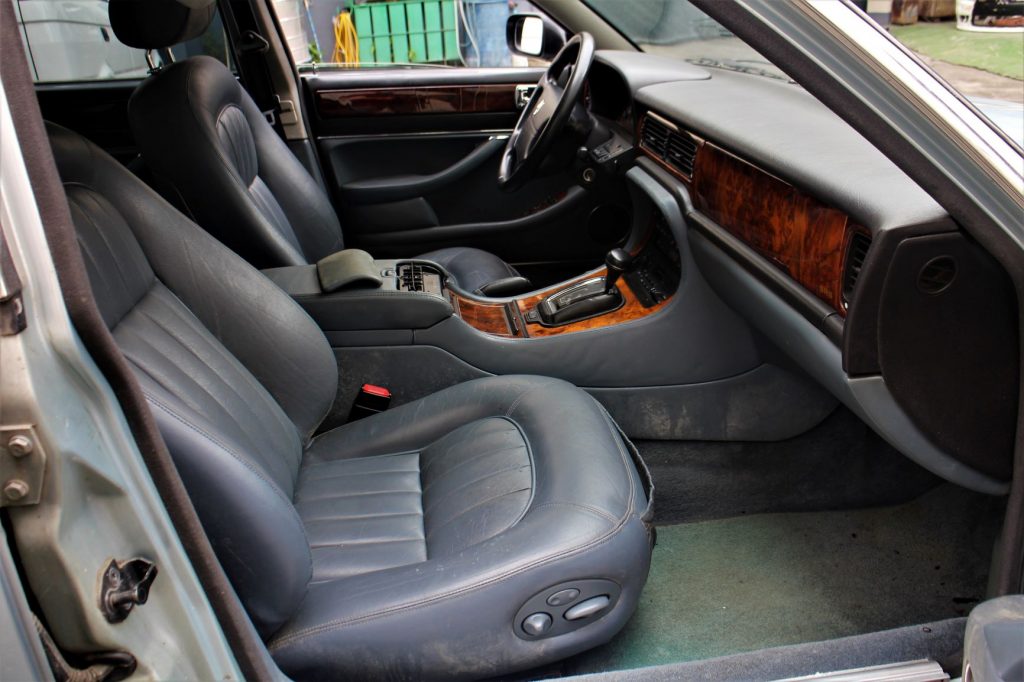 The backrest of the power front passenger seat reclines but it doesn’t go back up. The controls, relays and wires need to be checked.

While we were warming up the engine to see if the auxiliary fan will spin before it overheats, Johnson saw the excitement in our faces as we revved the twin-cam 24-valve inline-6. “It’s got nearly 250 horses”, we bragged. Johnson nodded and then asked, “Would you like to get it out on the road and drive it around? After all, the engine’s running and we cannot debug it efficiently by just letting it sit and idle in the parking lot.” Ooh… We wanted to say “yes” and drive our Jaguar home but we have to keep our enthusiasm in check. “It needs an oil change and new ATF. All the electrical components need to be checked and repaired. The old tires need to changed. The registration needs to be updated before the car can be driven out on the road”, we keep repeating to ourselves. 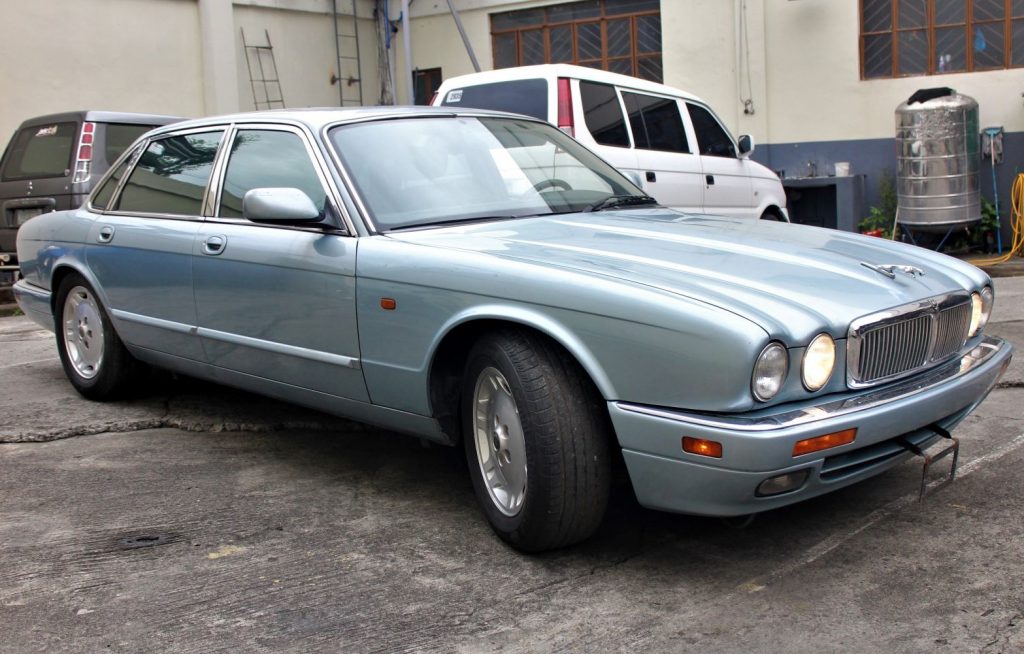 With the engine running and the car moving under its own power, we’re very tempted to take our Jag out on the roads. 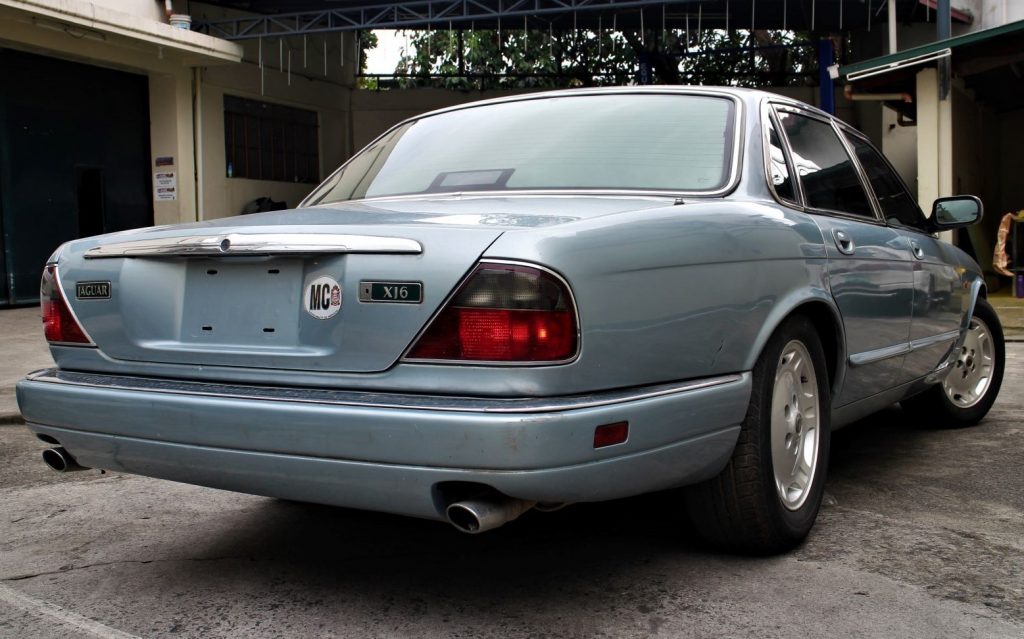 But we need to get a lot of work done first before we can get it roadworthy so we can drive it with confidence. And yes, we’ll have that “MC” sticker removed soon.

We were surprised to get a phone call from the owner of the MMM Building where our Jaguar laid dormant for several years. “Congratulations!”, he blurted out. “I was following the progress of the car’s restoration on Facebook and I’m getting envious of how it’s beginning to turn out. You’ve turned it from trash to treasure in a short time. Keep up the good work!” We thanked him for the encouragement but we wanted to tell him that the restoration isn’t finished. In fact, the actual work just started. We just hope that there would be no new surprises along the way. 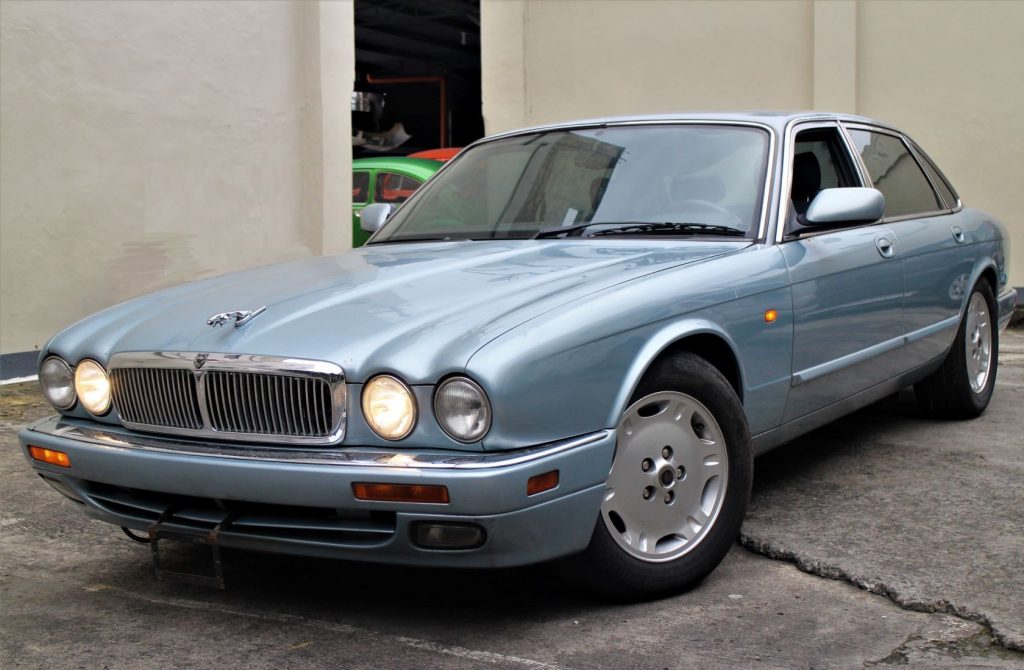 Don’t be fooled, folks. Our Jag’s a “ten-footer”, meaning it looks good from ten feet away. 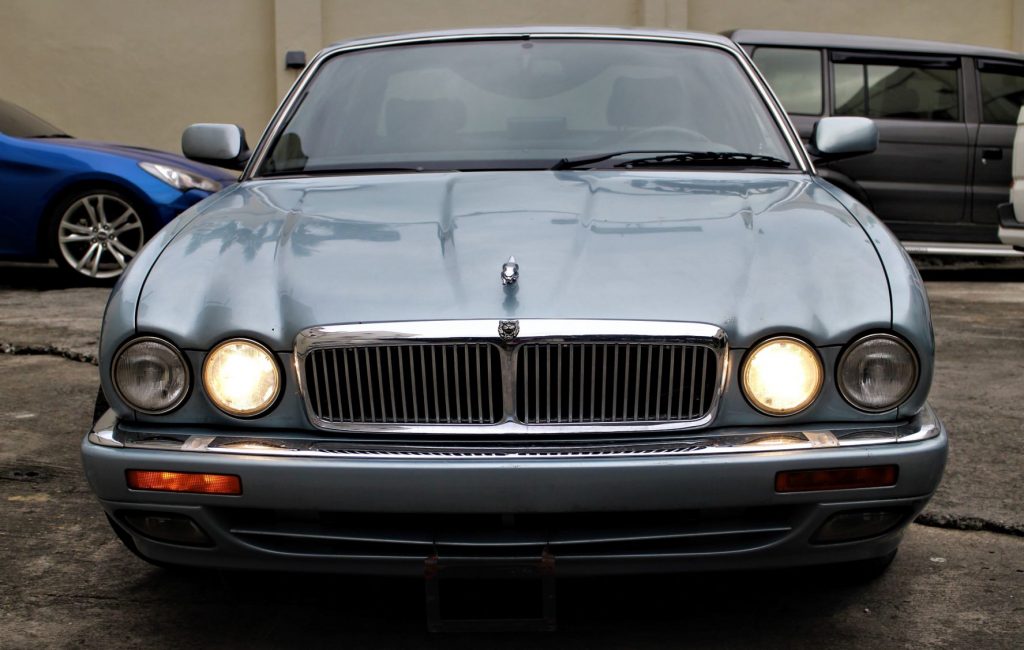 But our consolation is that it’s now running. How can you go wrong with a P50,000 Jaguar that’s running?