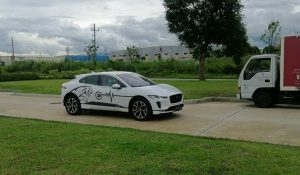 It started innocently enough. On October 11, 2020, we were having a snack after test driving the 2020 Jaguar I-Pace electric vehicle around the Arthaland Sevina Park real estate project in Biñan, Laguna. I was halfway through a delectable Wolfgang Angus Beef Burger when Chris Ward, the president of All British Cars, Inc., asked me a question that would unwittingly lead us to our latest Power Wheels Magazine project car: “Lester, do you know of anybody who breaks or decommissions old cars here in the Philippines?” 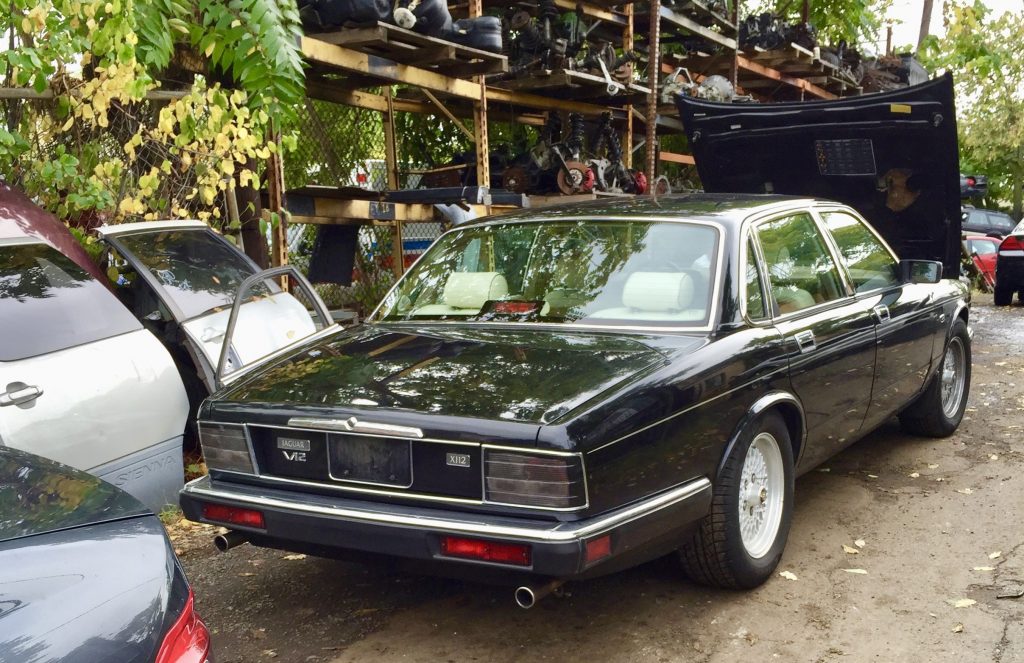 For those who don’t know, decommissioning vehicles is a big business in the U.K. and Japan, where it is illegal to leave old, inoperable cars openly unattended on the roadside or even in your own property. The car owner is compelled to pay a company to haul away, decommission and dismantle an old vehicle that is no longer roadworthy. Before totally breaking the vehicle, the company also collects all its oils and fluids and recycles or disposes these properly to help protect the environment. Junkyards have now become green and sophisticated. 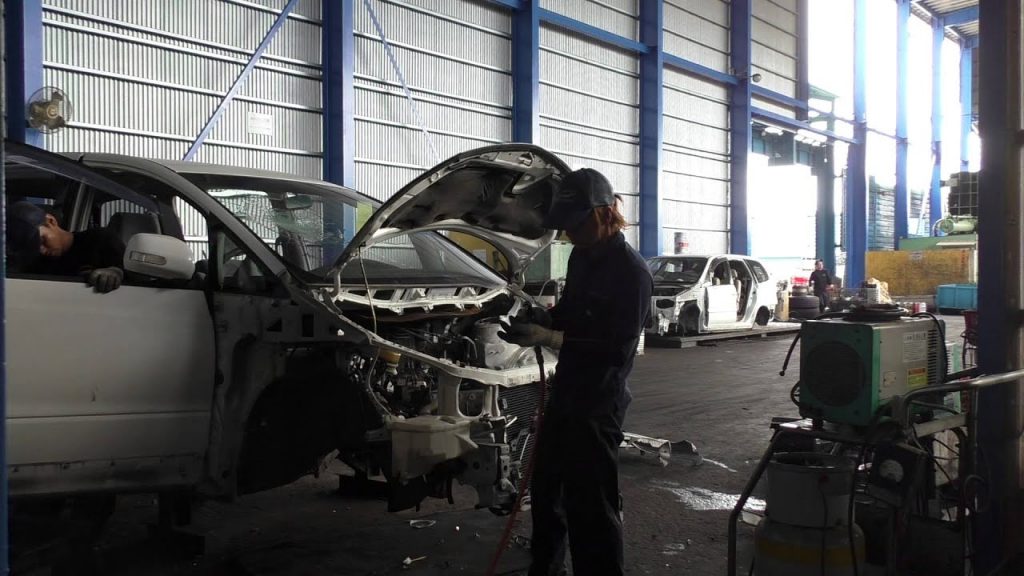 Chris’ question got the gears in my head spinning. “What car needs to be decommissioned?” I asked. “A Jaguar XJ6 Sovereign, but I’m not sure of its year. It’s from the ‘80s, I think”, Chris replied. The gears in my head spun faster. I called the attention of my wife, Shawie, who loves the graceful shape of the Series I to Series III XJs, especially in ’80s TV series “The Equalizer” starring Edward Woodward. “Hon, there’s a junked Jaguar XJ with the classic quad headlights and the shapely hood. It’s the one that you like”, I teased her. I saw that she was more than interested. 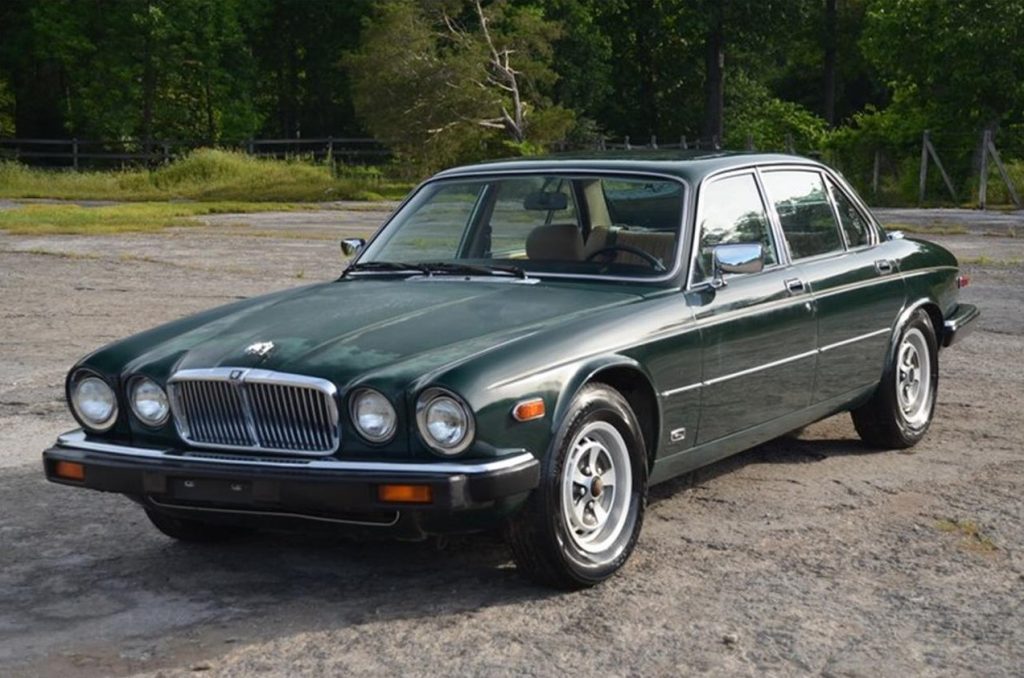 “The owner of the Jaguar died while he was abroad in August 2016. The rightful heirs cannot do anything with the car because they live in another country”, Chris continued. “If the heirs just wants to junk the car, please tell them that I’ll gladly pay for the towing service if I can get the Jag for free”, I jokingly told Chris. “I’ll decommission the car myself and the heirs won’t have to shell out a single centavo”. “Okay. I’ll tell them”, was Chris’ quick reply. Suddenly, an old Bee Gees song started playing in my head: “I started a joke…” 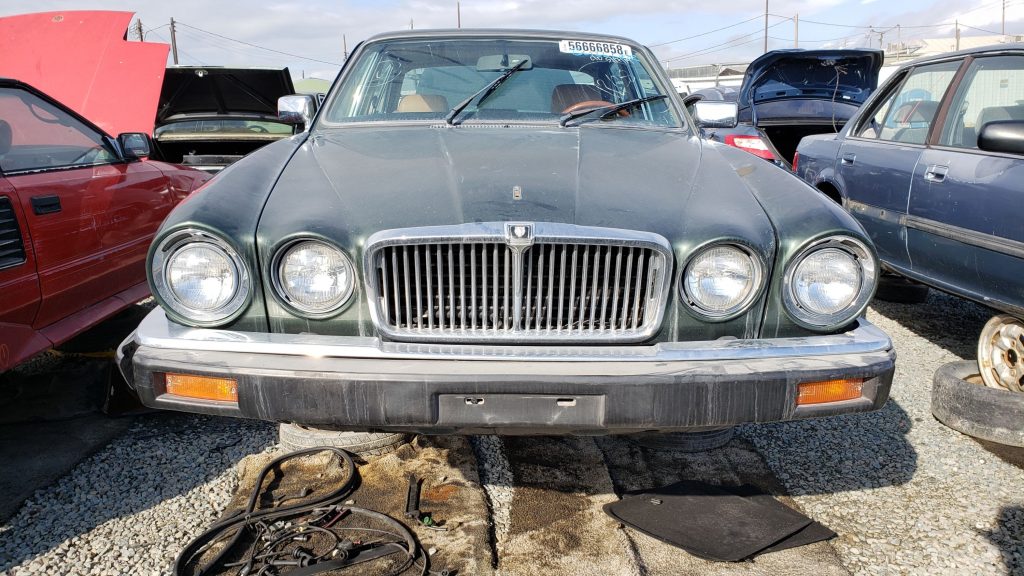 Curiosity and the Cat

I have to admit that I was intrigued by the Jaguar. I called Chris a couple of times in October to ask about it. He sent me photos of the car that were taken in May 2017 when the heirs came to the Philippines to settle their late father’s affairs. When I saw the photos, I was surprised to find a 1995 XJ6 Sovereign that looked too nice and too stately to be junked. My curiosity got the better of me and I bugged Chris for the location of the car and to get the heirs’ permission to inspect it. 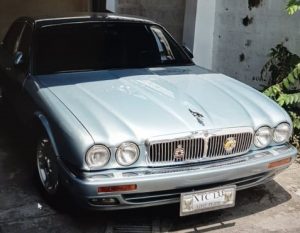 After October and November passed without Chris disclosing the location, I thought that either the car was already sold, or that it wasn’t for sale anymore. Then in the middle of December, Chris got me an appointment to inspect the Jaguar and sent me the keys. On the 17th of December, I drove several kilometers south to the MMM Building along East Service Road near United Parañaque Subdivision 2, and finally got the chance to see the car, which was parked in the open lot behind the building. Uh, hmm… this is not what I was expecting… 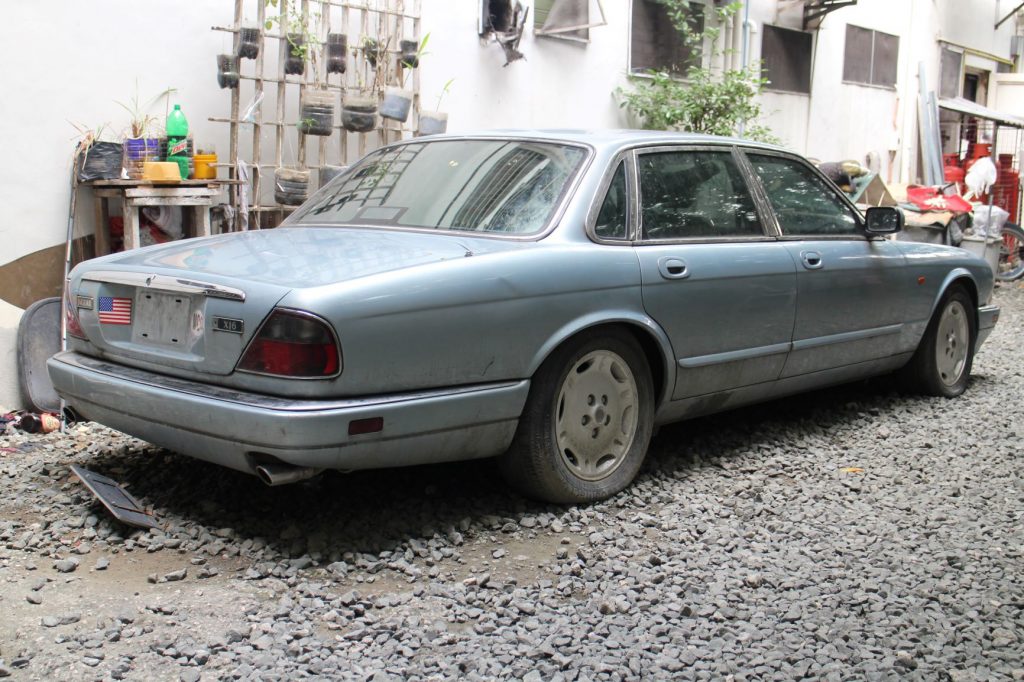 The XJ6 that I was viewing was known inside Jaguar circles as the X300. It was the last full-size luxury Jaguar model that was designed, developed, and engineered by the Coventry factory before the Ford Motor Company took complete control. Manufactured between 1994 and 1997, the X300 evolved from the previous XJ40 series but was built with Ford’s inputs on improved build quality and improved reliability. Its styling was a return to traditional Jaguar design elements. 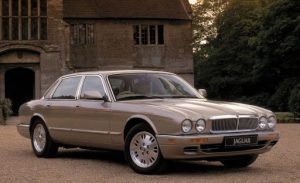 The X300 was launched at the 1994 Paris Motor Show, where Jaguar promoted it as the “New Series XJ” to distinguish it from the XJ40. Unfortunately, the X300 in front of me was a far cry from being new or from being a show car. It was left unattended for around three years and was parked under the elements. The tires were flat and there were a couple of small dents, several scuff marks, and some scratches on the Sea Frost Blue paint. And somebody got it wrong – it wasn’t even an XJ6 Sovereign, it was just a short wheelbase (SWB) 1995 Jaguar XJ6 that was left in an undignified state for several years. 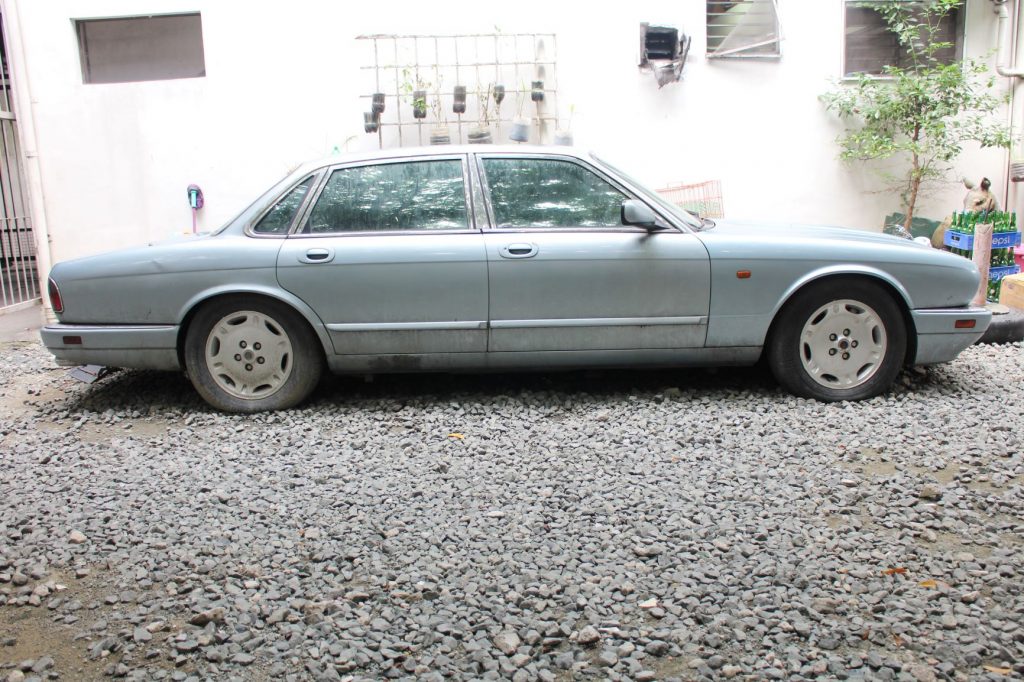 The car was sitting closer to the ground because of its underinflated tires. The 16-inch Dimple alloy wheels showed traces of oxidation and there were heavy stains on the paint and glass. The front grille was broken, the paint on the bumper panel was peeling, there’s a small dent at the right rear panel, and the fabricated rear license plate holder broke off because of rust. The lower edges of the doors have started rusting as well while there were a couple of scratches on the veneer panel at the driver’s door. 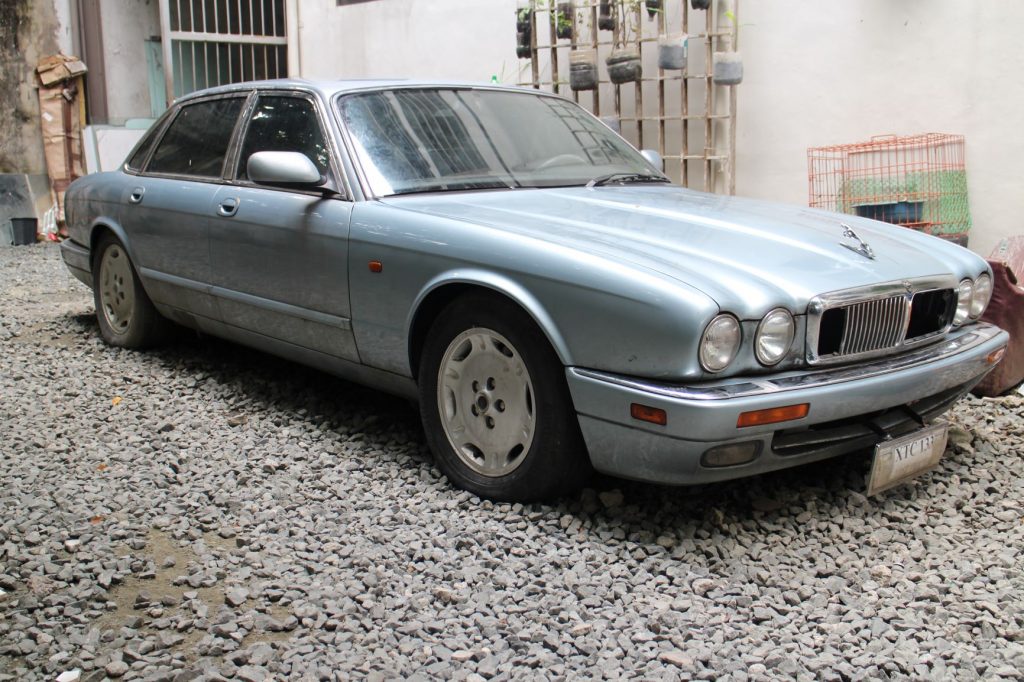 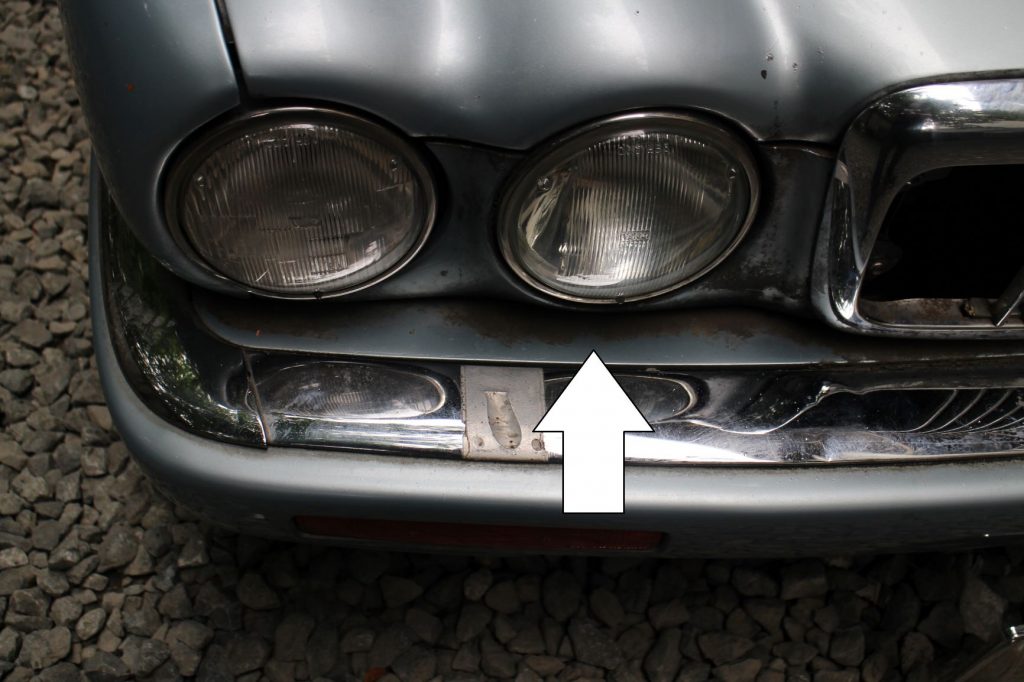 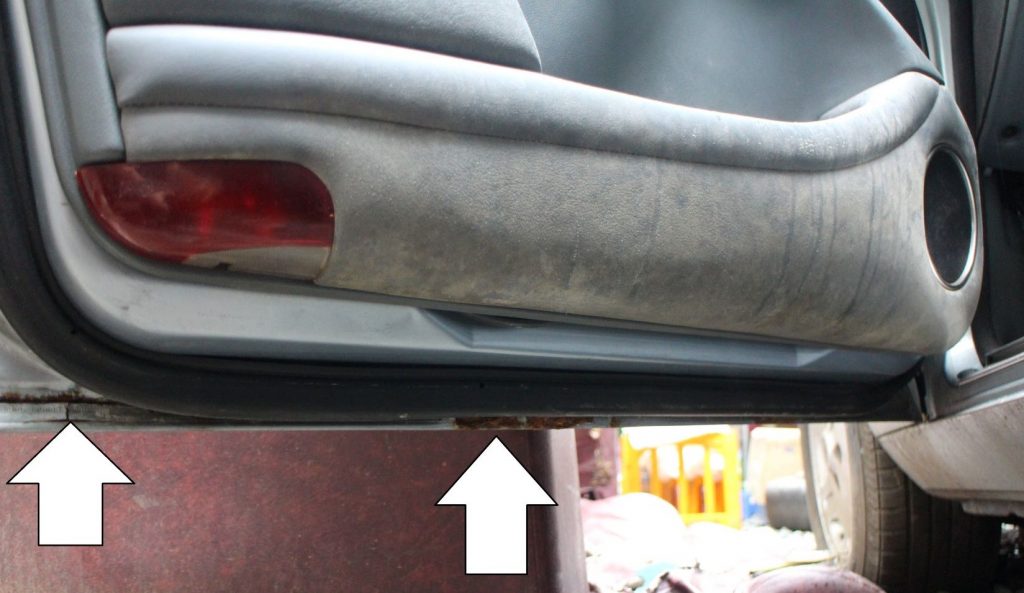 There was mold all around the interior and a section of the ceiling has collapsed. Some parts of the interior, such as the leather cover for the center console and the rear aircon vents, were missing. The trunk was missing its battery cover panel while in the engine bay, rats have chewed on the wires, hoses, weather strips, and other rubber bits. A corner of the firewall, some brackets, and the radiator support were likewise showing signs of rust. I found more components that needed repair as I looked closer around the car. 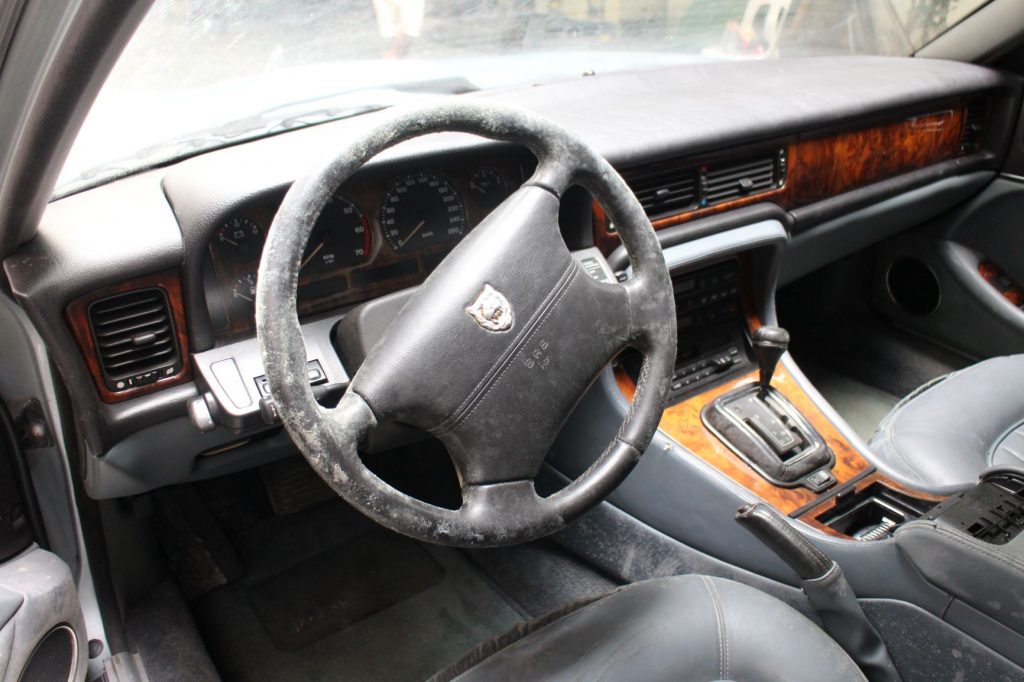 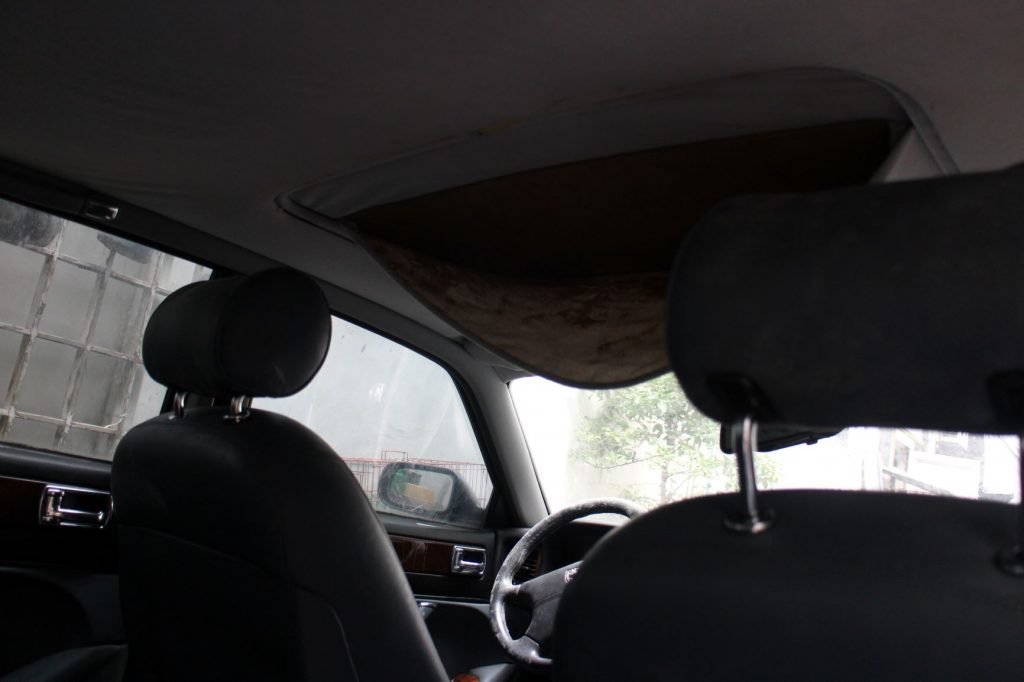 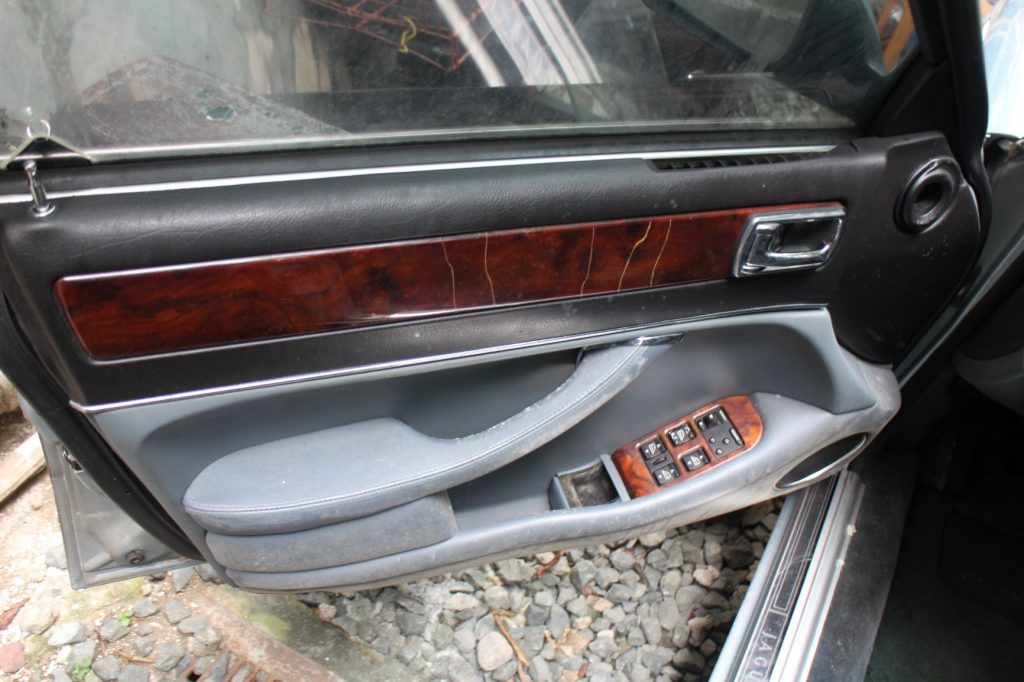 I pushed the rear wheels in and out and felt some movement, which could mean that the suspension bushings might be deteriorated. I couldn’t initially tell if the AJ16 inline 6-cylinder engine was a 3.2- or a 4.0-liter because the plastic engine cover has been repainted. But after seeing the “Normal” and “Sport” switch below the shifter quadrant in the interior, I knew that it was an electronically-controlled ZF 4HP-24 4-speed automatic transmission, which is normally mated to a 4.0-liter engine. The 3.2 doesn’t have this feature. 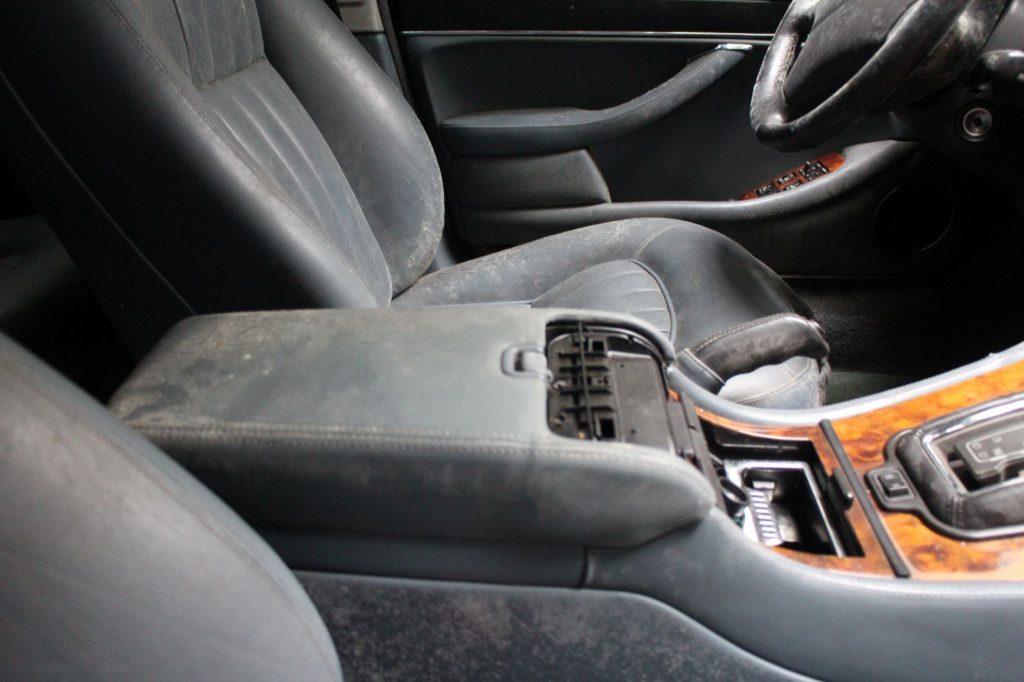 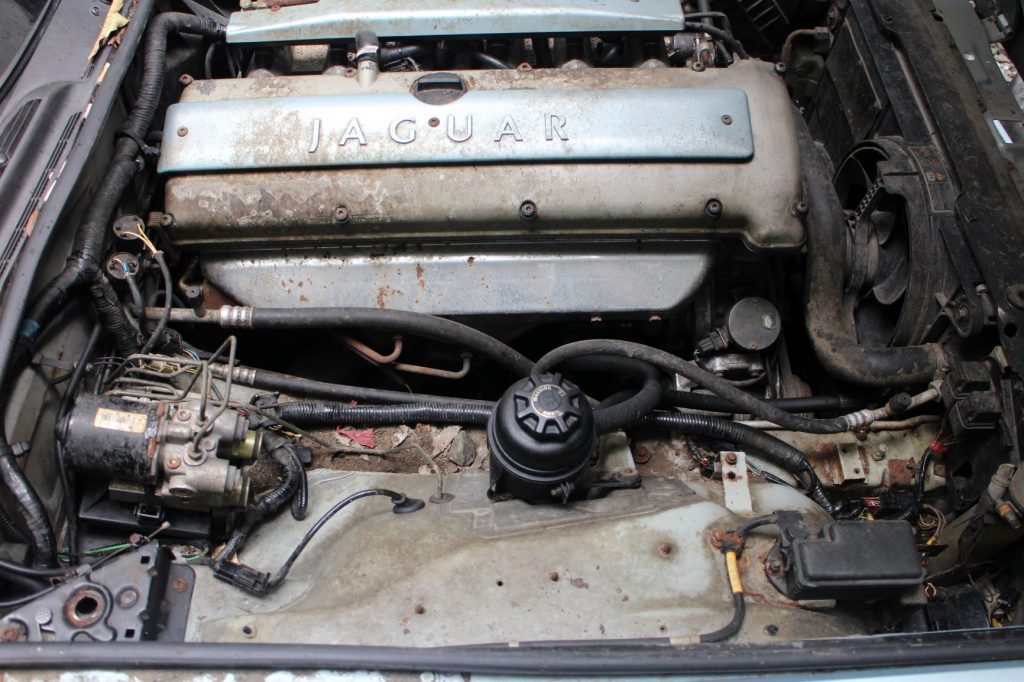 After I saw the condition of the XJ6, I realized that it would require a great deal of work to bring it back to its former glory. It didn’t help any when one of the helpers in the property narrated that the car was left there because the engine was overheating. With a dead battery and rat-bitten wires and hoses, I wasn’t able to see if the engine would start, nor was I able to activate the instrumentation so I can see the Jag’s actual mileage on the odometer. However, I really felt sorry to find the once-stately Jaguar in such an undignified state. 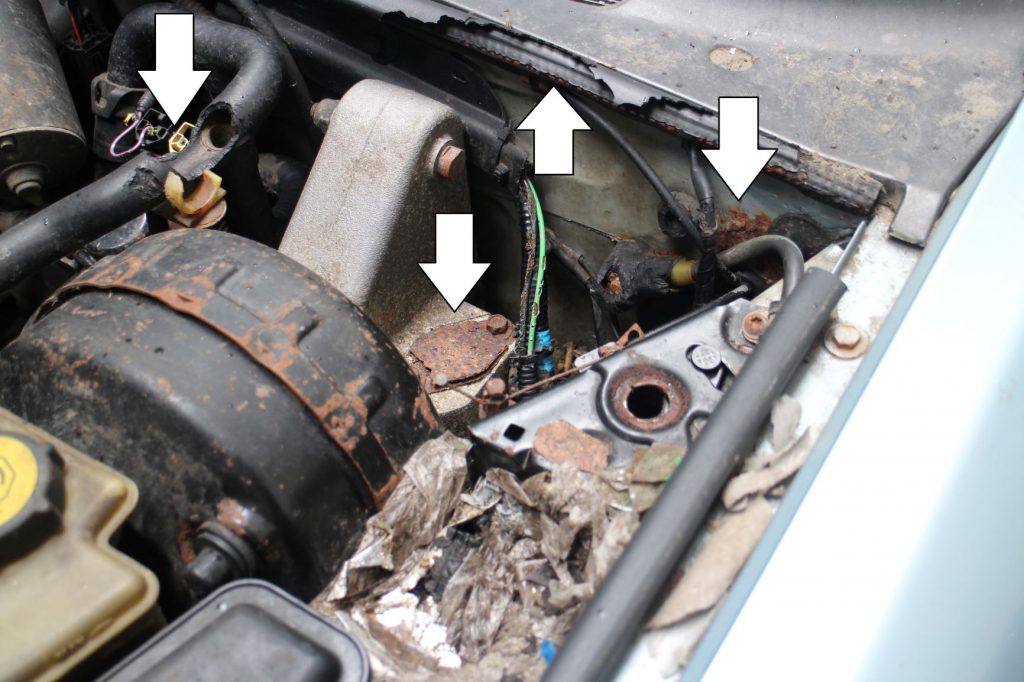 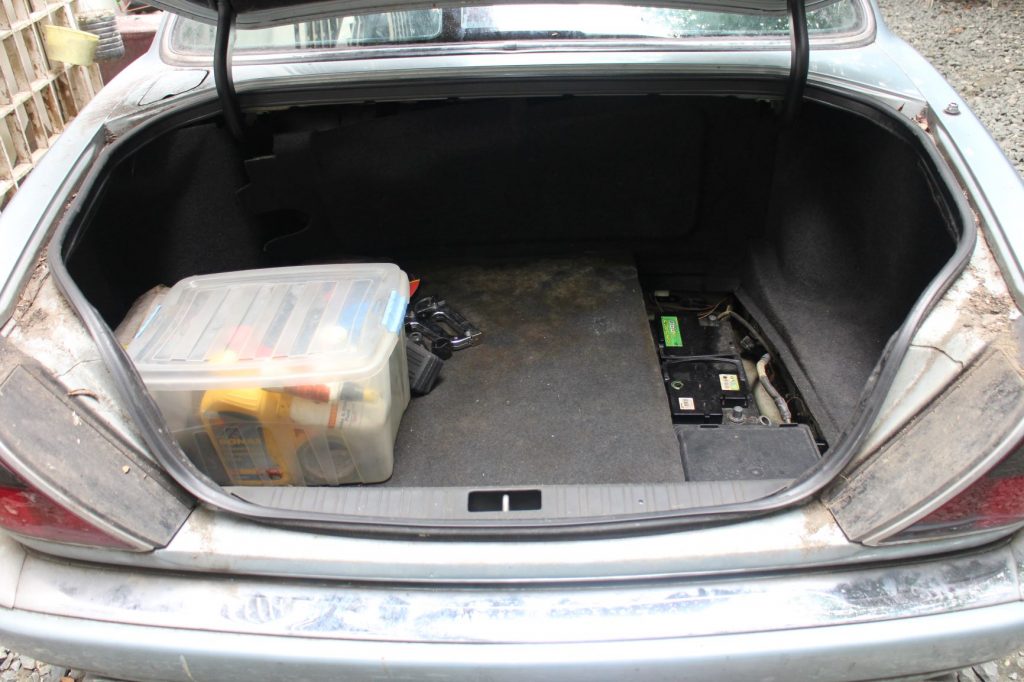 After inspecting the car, I passed by the Jaguar Land Rover Greenhills showroom to hand the keys back to Chris. He was dismayed with the car’s condition when he saw the photos I took. Nevertheless, he directed me to correspond directly with the heirs and ask about their plans for the car. At that point, I was not so sure if I could afford to get into another expensive project. But I also could not leave that 1995 Jaguar XJ6 4.0 SWB in such a bad state. It was like a lost and abandoned cat. I was itching to rescue it. 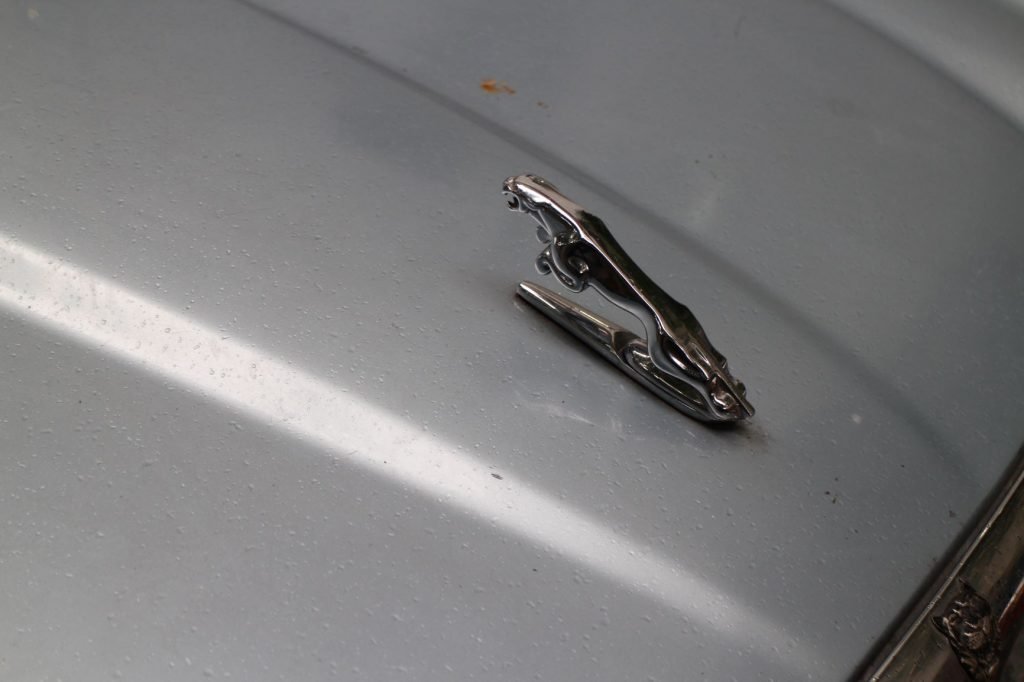 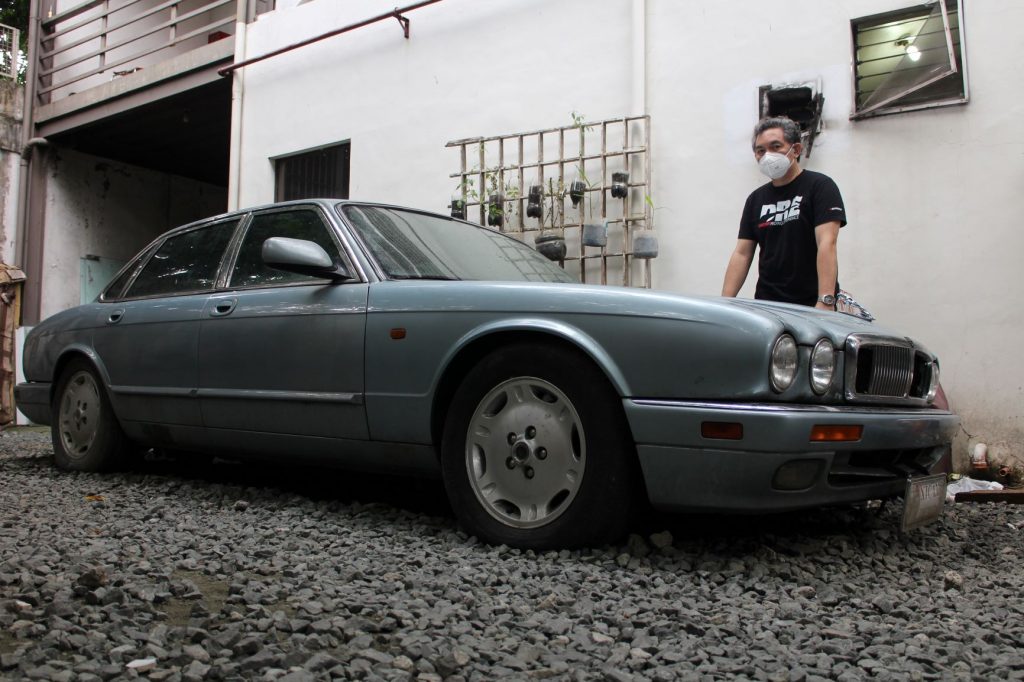