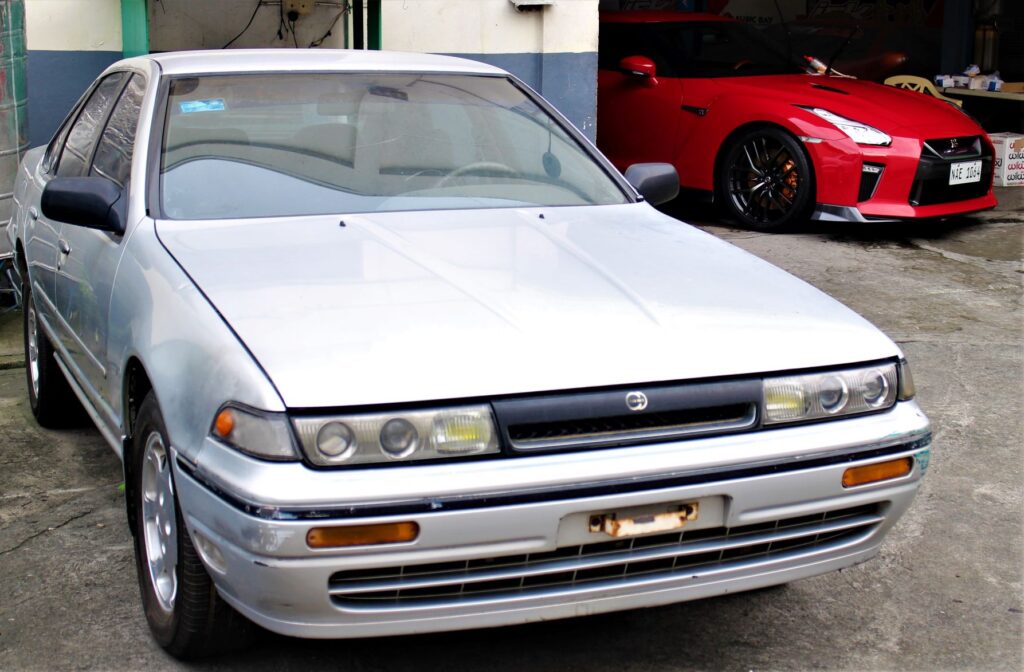 First of all, we would like to apologize to the countless loyal followers of our Power Wheels Magazine Project Car series for the delay in the updates. Thank you , dear readers, for your emails and PMs asking about the current status of our project cars. We have to admit that we slowed down a bit in the last few months due to several factors, including our need to stay safe from the Coronavirus mutations, becoming busy with other activities, and prioritizing our meager budget. Rest assured, though, that we’re still working on our cars, including our 1990 Nissan Cefiro 2.4 GTS-R  (A31), seen above with its younger, high-performance sibling, the red-hot Nissan GT-R (R35). 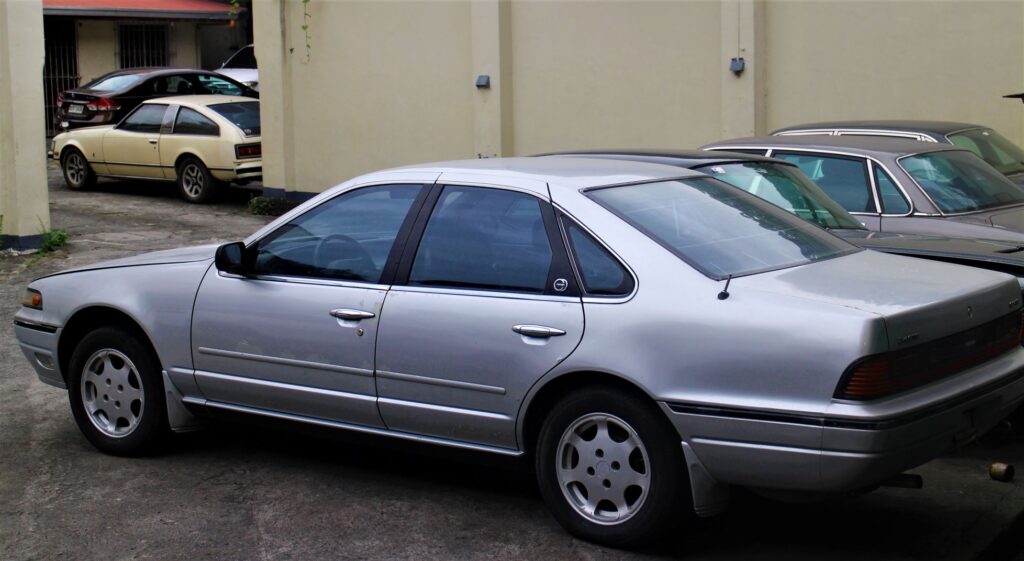 Ardent readers will recall that we bought the Cefiro from an elderly gentleman in Aringay, La Union in October 2021. We “borrowed” its license plates, which were held in storge at the La Union branch of the Land Transpotation Office (LTO) in November, with the intention of processing its registration so we can test drive it before we dvelve into its restoration. Things were going according to plan when we got another project car in December – a 1978 Toyota Celica XX Supra, seen at the background above. Instead of becoming automotive restorers, it seems that we’re becoming hoarders of attractive and significant car models. While waiting, our silver Cefiro became a little “green”, literally, because a plant sprouted from the front mudguard.

Off with the Flake! On with the Paint!

We also had to wait for our Cefiro’s turn to be worked on at JSK Custom Paint and Auto Works in Marulas, Valenzuela City because of the numerous auto works in their shop. After we took the car from Aringay and brought it to the workshop, JSK proprietor Johnson Tan noticed that its paint was flaking off. He opined that the car underwent a paint washover in the past but it wasn’t properly prepared, thus, the paint was flaking off. Since the base paint was still in good condition, he suggested another washover paintjob instead of scraping the body to bare metal, which is alo good for our meager budget. So, in April 2022, the flaking paint of our 32-year-old Cefiro was scraped and sanded away by the JSK body and paint guys. 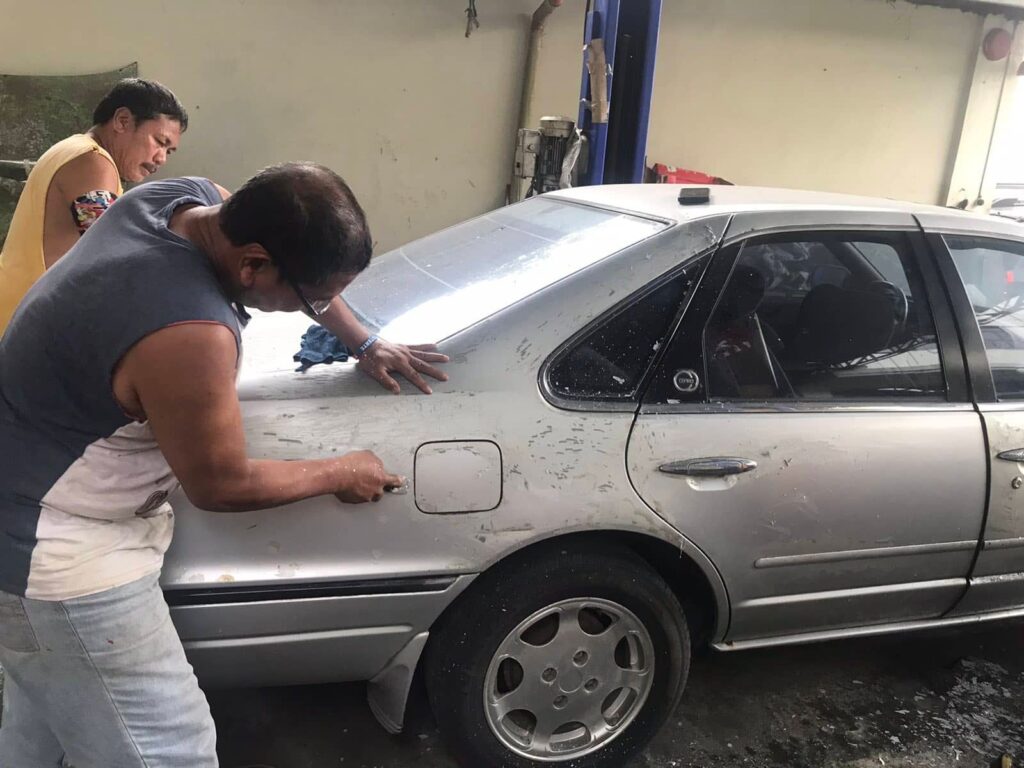 The JSK body and paint guys slowly and carefully scraped the flaking paint off our Cefiro.

The JSK body and paint guys worked in a team of three to expedite the work on our project car. 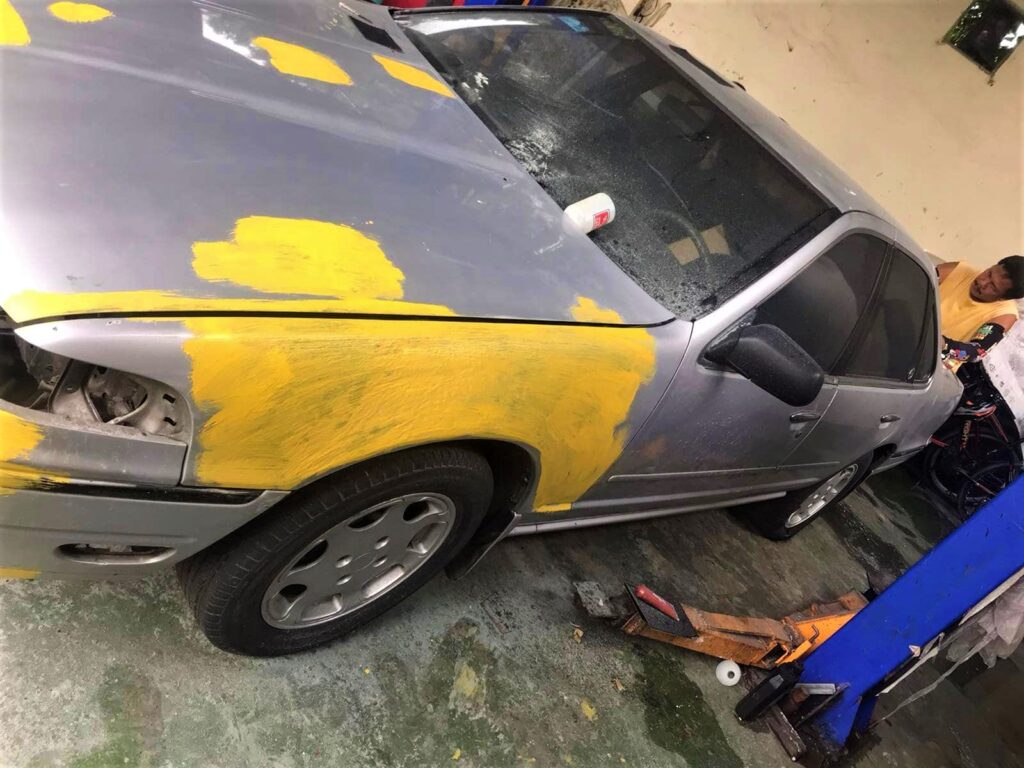 Yellow epoxy primer was applied to the areas where the old paint has been sanded or scraped off to protect it from surface rust and to ensure better paint adhesion for the new coating.

After the body of our Cefiro was cleared of the old flaky top coat, epoxy primer was applied to panels where some of the metal became exposed to prevent surface rust from forming and to ensure better paint adhesion for the new top coat. After the whole body was cleaned, a light dab of body filler was applied and sanded down to a minimum before spraying the silver top coat. Johnson watched over the entire process because he wanted our premium Japanese sports sedan from the ’90s to look like it just rolled off the factory. “As you know, we specialize in custom paint work that are worthy for the car show and competition circuit”, said Johnson. “Given a generous budget, I would have wanted to make it a fully-customized show car or even a drift racer. But it’s a welcome challenge for us here at JSK to preserve your Cefiro, especially since it is mostly original when you found it.” 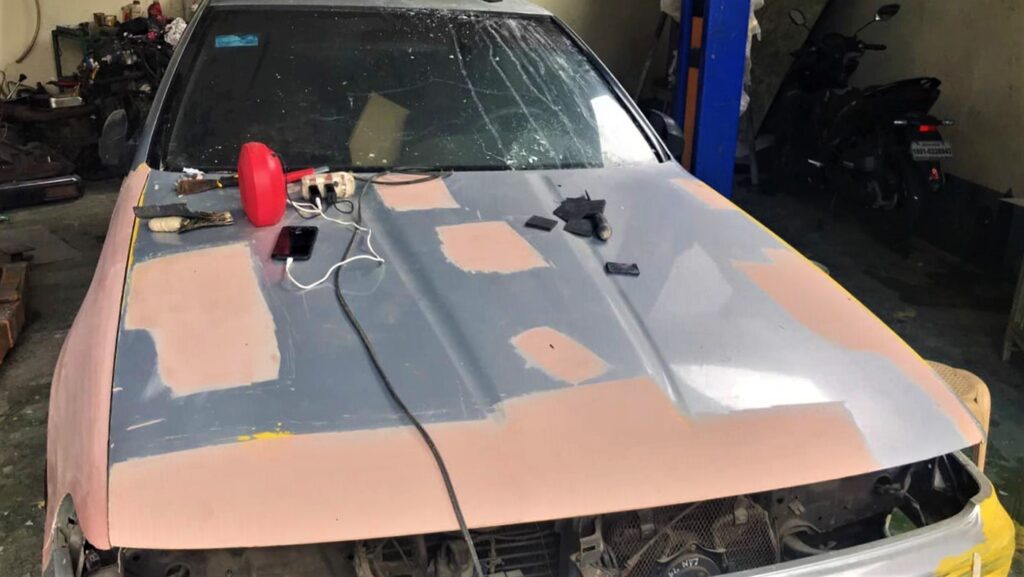 A light dab of filler was applied and later sanded down to address the surface imperfections of some body panels. 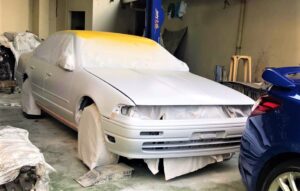 After all the body panels and surfaces were sanded and the imperfections addressed, our Cefiro was sprayed with the base coat and left to dry for a couple of days. 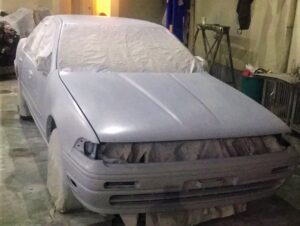 After the base coat was cured, the top silver coat was sprayed over. 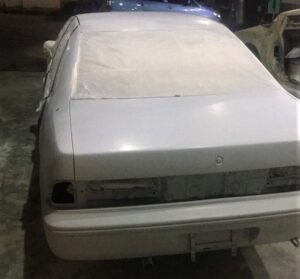 The JSK paint techs made sure that all the panels of our A31, including the rear portion, got an even coat of the factory silver paint.

Watching Paint Dry and Waiting for the Big Finish

Whoever said that watching paint dry is utterly boring must not have experienced waiting for their dream car to come out of a paint booth. While we did not literally watch the paint of our Cefiro dry, we were quite excited to get perioidic reports on Viber from Johnson regarding the progress of our project car’s paintjob.  A few days after the new silver paint of our Cefiro was sprayed, it was followed by clear coat to improve the paint gloss. “I would have wanted more metallic bits in the silver paint to add glitter and more clear coat on top to make it shinier”, Johnson pointed out. “But we also have to be mindful of the weight of these additional finishes since we are using the factory base coat, which has been applied to the car around 32 years ago. We want to avoid having the paint flake again in a short time because 0f the additional weight of the new finish.” 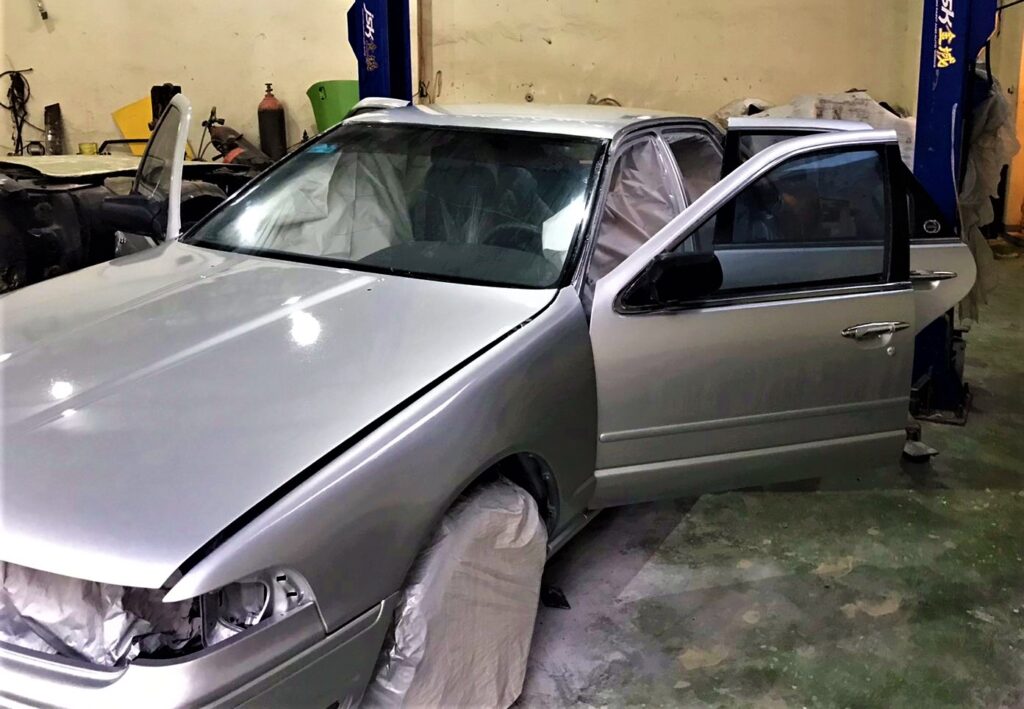 Even before the new silver paint was rubbed down, wet sanded, or buffed, it was already glossy and shiny. 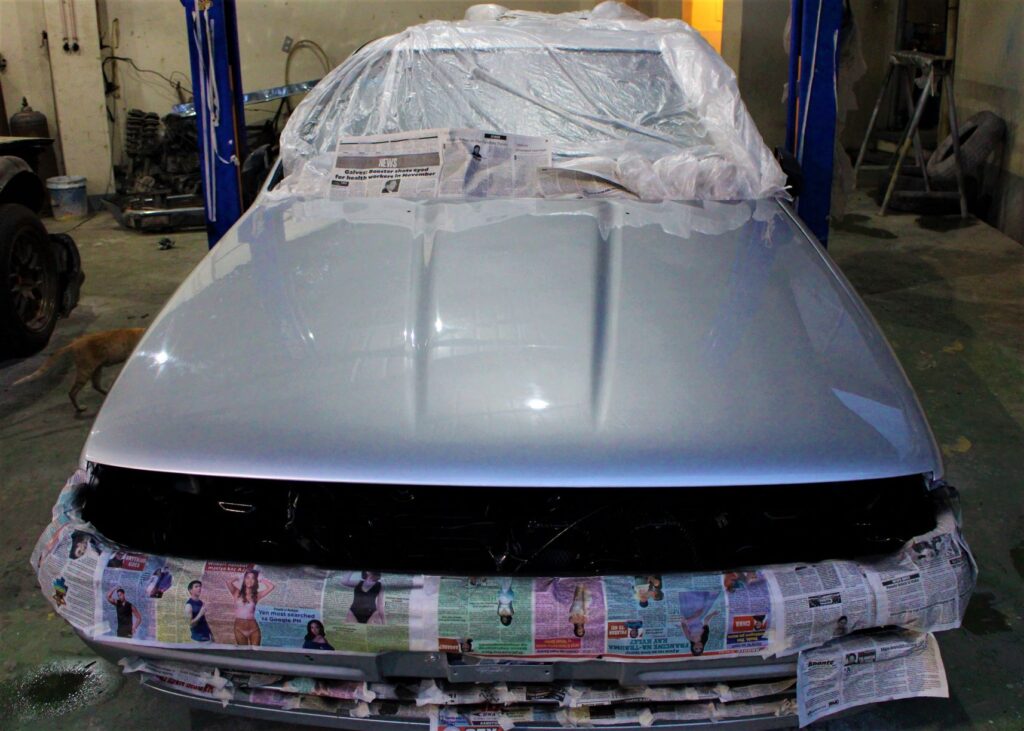 The reflection of the workshop ceiling on the Cefiro’s newly painted hood speaks volumes of the workmanship of JSK’s body and paint guys. 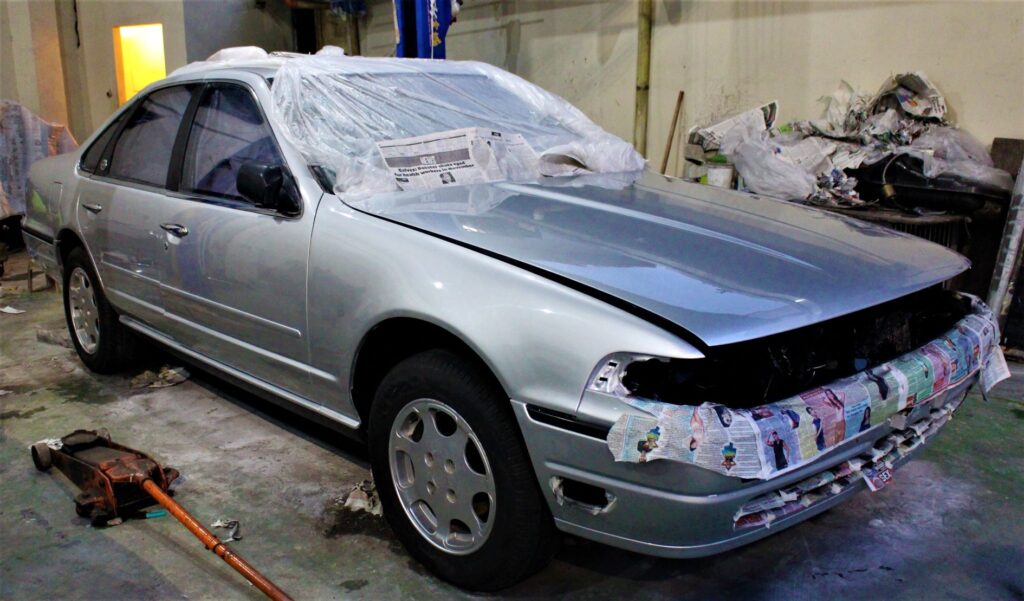 As more of the old newspapers/paint masks were being removed, we began to appreciate our Cefiro’s new silver paint even more. 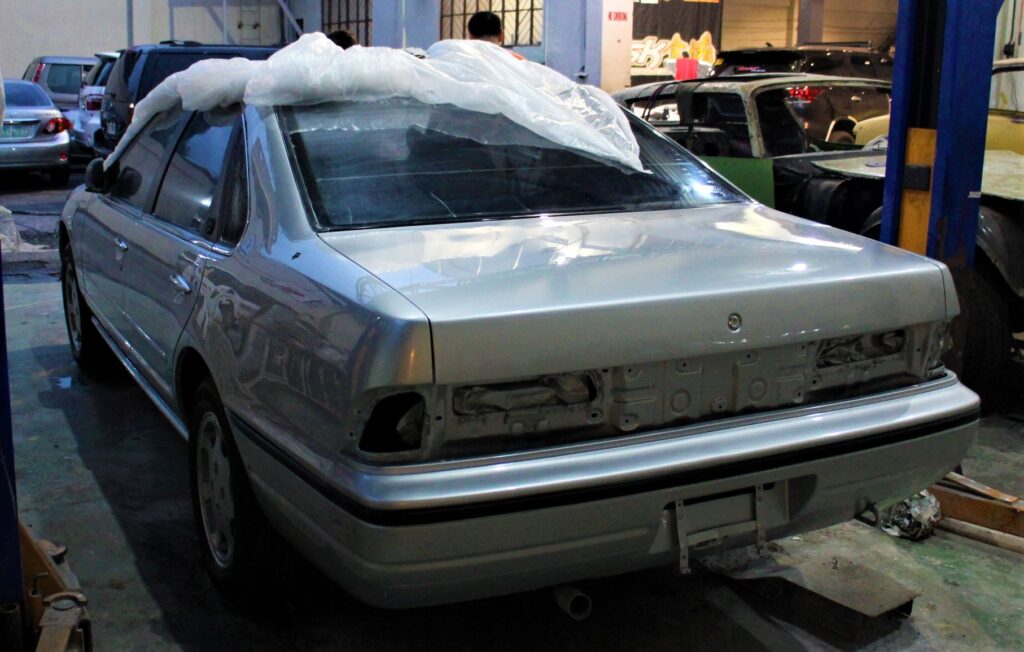 As various shades of dusk light falls on the car, the reflections on our Cefiro show off the smooth, shiny paint.

After the new silver paint has completely dried, JSK technicians and mechanics started reattaching and reinstalling the exterior pieces that were removed. The headlights, signal lens, front grille were reintalled and aligned as were the rear tail lights and light cluster. We had the old, faded window tint removed except for the one in the front windshield, which has a long crack and will be replaced with a new windshield. Johnson supervised the reassembly process ensuring that every panel gap is consistent and the reinstalled parts are all working. “Did you really give me the license plates of the Cefiro?”, Johnson asked. “I’ve been searching for it and couldn’t find it in our storage. It starts with a letter D, right?” It turned out that we were being pranked because the plates didn’t start with a “D” (for Dizon) but with the letter “P” (for pranked). Johnson got us worried for a while back there! 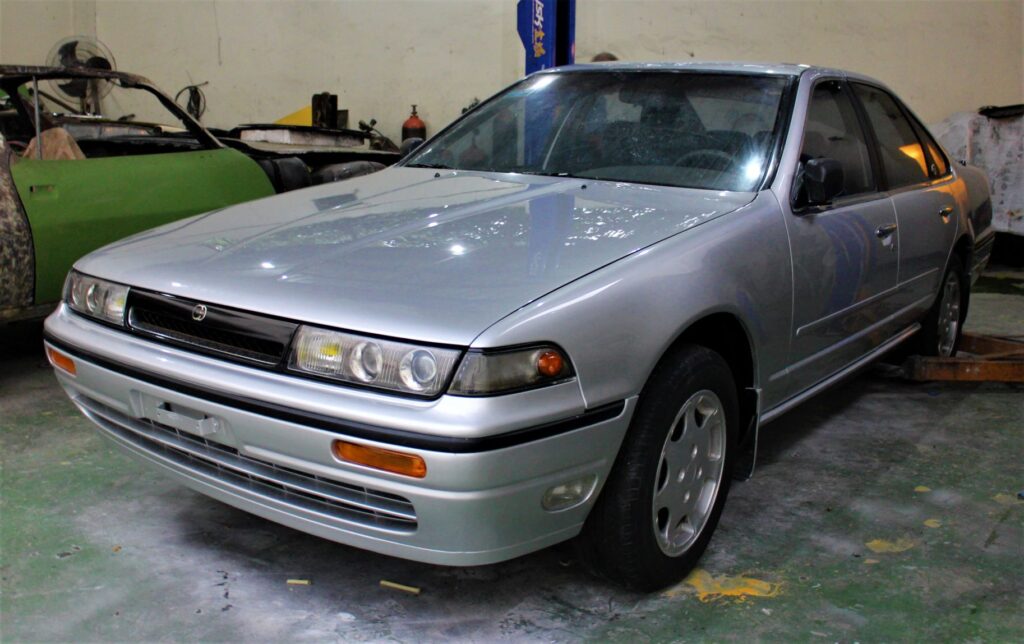 Our Cefiro began to look more regal as parts were being reinstalled and the car was being reassembled.

Our project car was beginning to look good from any angle. 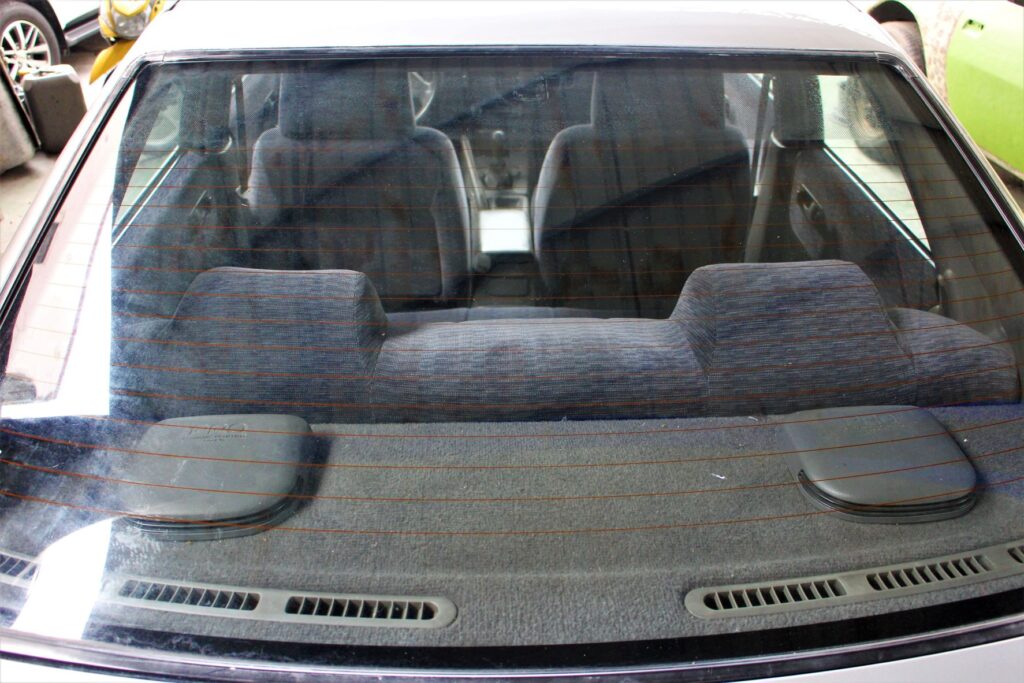 We had the aging faded tint removed and the glass cleaned. 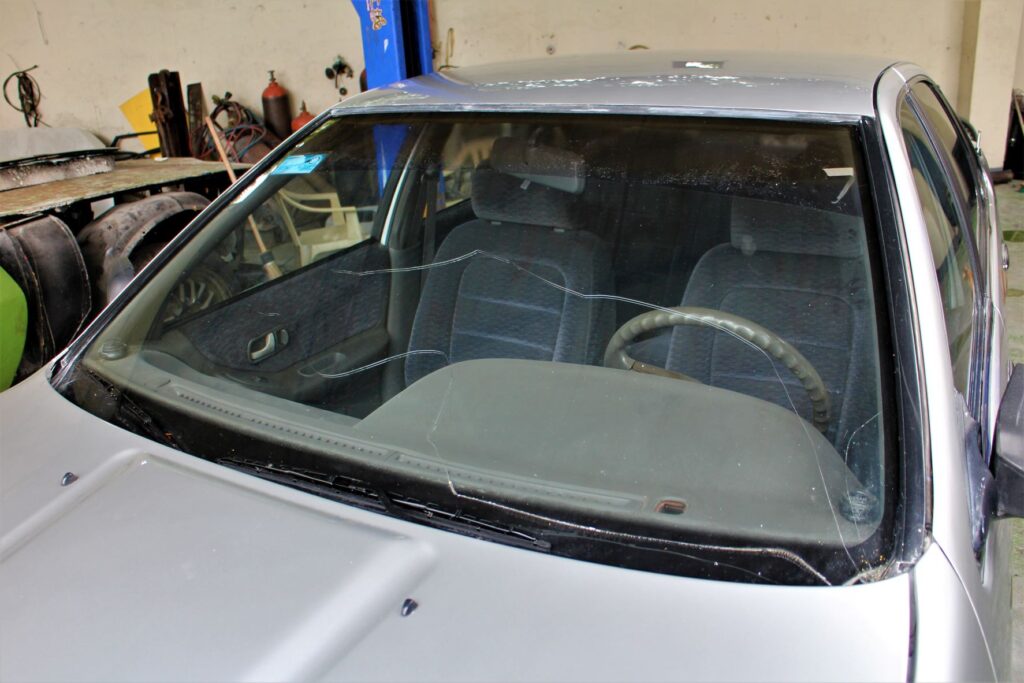 We will have the cracked windshield replaced because the crack is too long to be repaired.

Johnson pointed out that their work on our Cefiro is not yet finished. His team of detailers and technicians will work on cleaning, detailing and making sure that everything works. They will also clean the interior and make sure that all the controls and switches are working. On our end, our work has only began. After the windshield has been replaced, we will have to have the engine tuned and ensure that it will pass emission tests so we can process the renewal of its registration with LTO La Union, where we surrendered the original Certificate of Registration (CR) and Official Receipt (OR) in exchange for the stored license plates. We’re hoping that our Cefiro gets a clean bill of health from Johnson Tan and his team at JSK before we take it home and continue its restoration. Stay tuned! 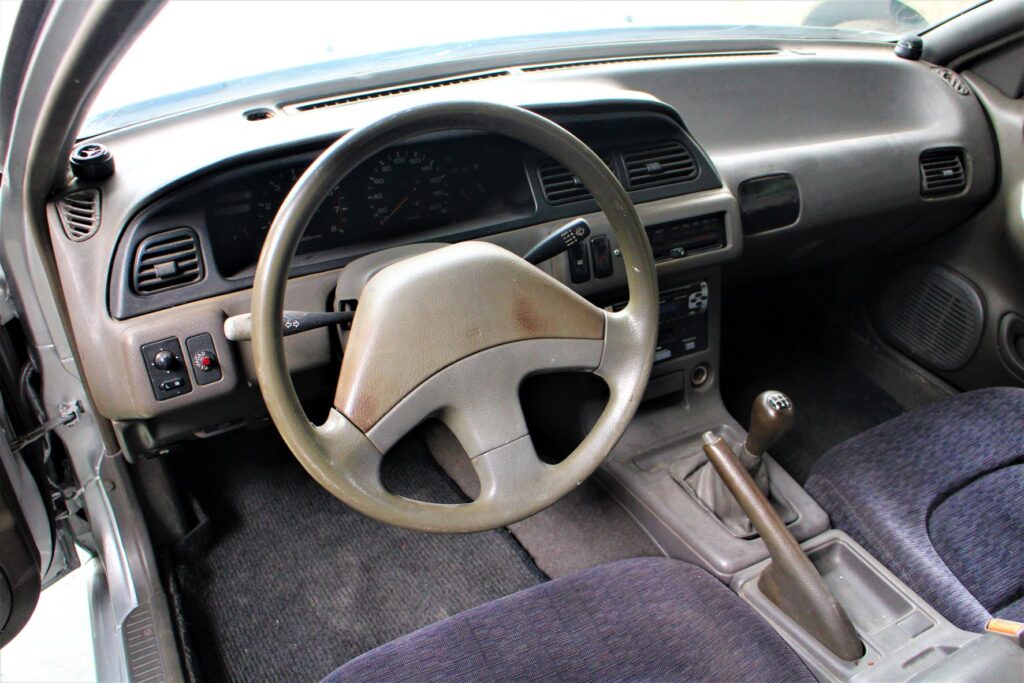 Once it’s running well, roadworthy and road-legal, we’re planning to bring our Cefiro to Meguiar’s for further interior detailing. 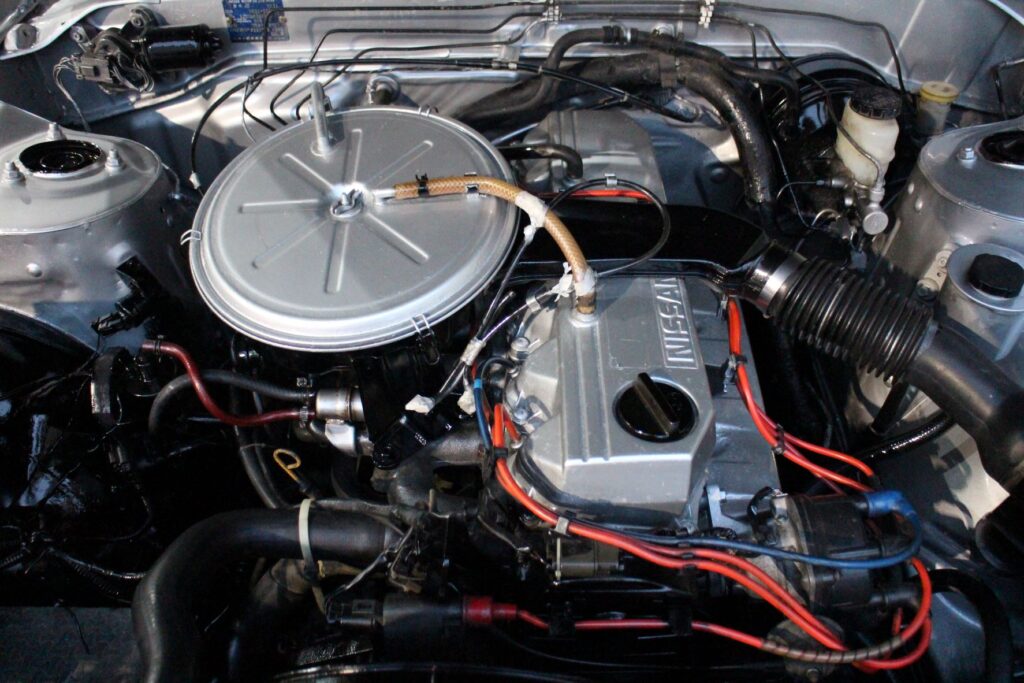 The engine bay was cleaned and some parts painted at JSK. We just need to do a little more work. 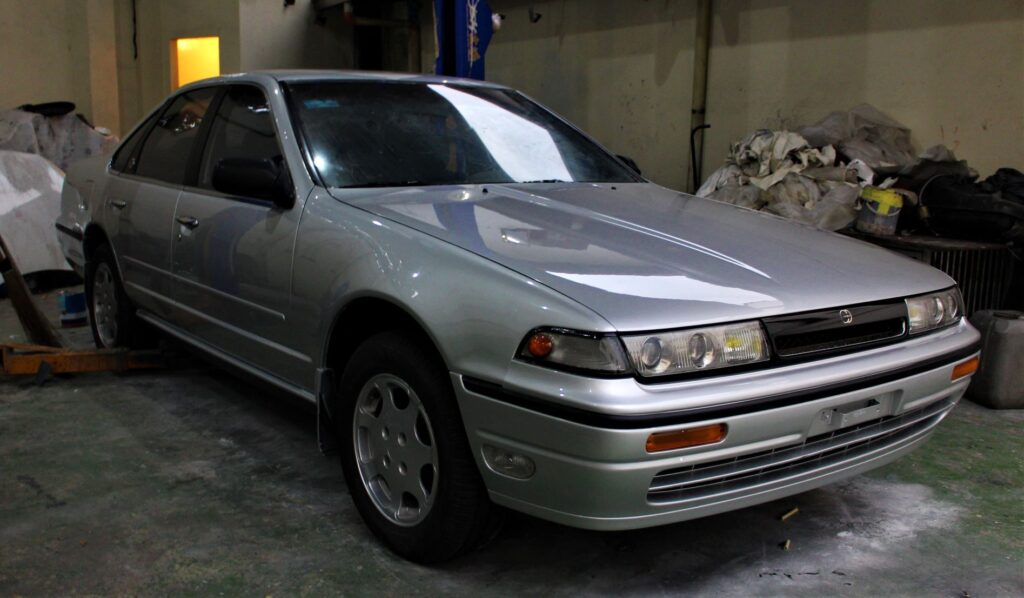 We cannot wait to take our Cefiro out for a long drive!