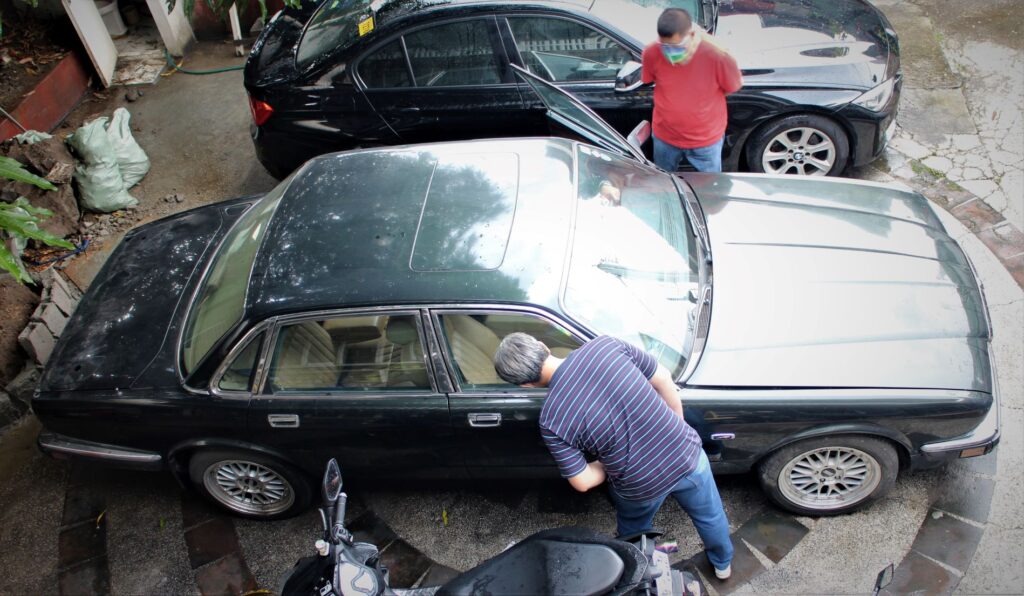 After reading about our 1995 Jaguar XJ6 (X300) project car here in our Power Wheels Magazine website, our good friend Rodger Yu invited us to take a look at two Jaguars that he’s planning to restore for his two sons. He sent us photos of his two cars and we found out that they are XJ40-series XJ6s that were made between 1986 and 1994, which preceded our X300 project car. Rodger, who’s a meticulous classic car enthusiast among other things, was impressed with how JSK Custom Paint and Auto Works handled the restoration of our Jag, so he asked if they could see his Jags. 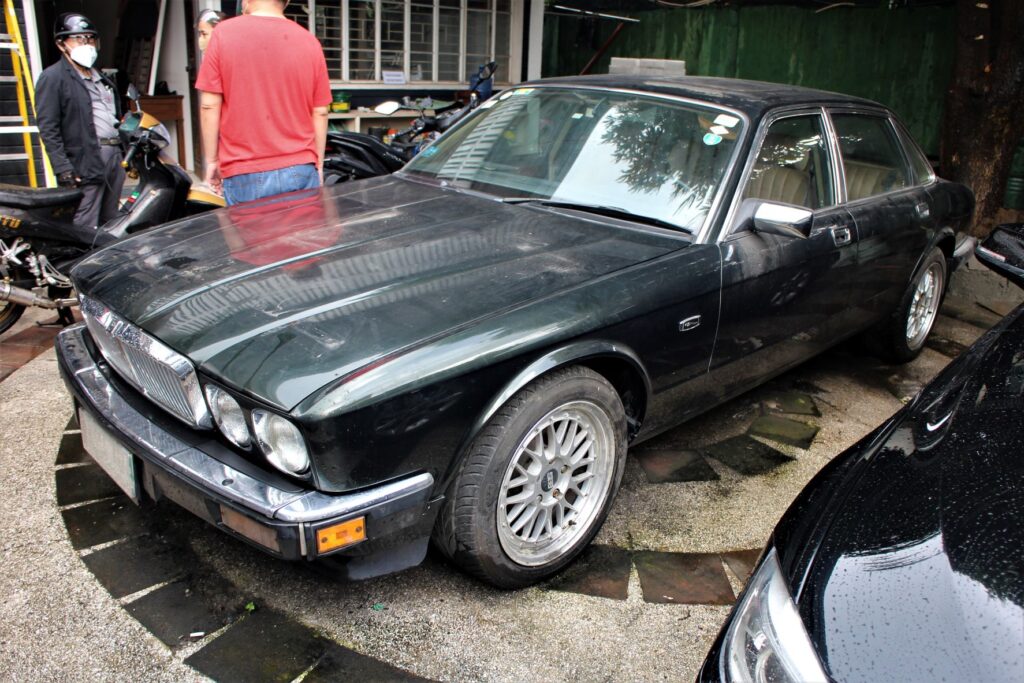 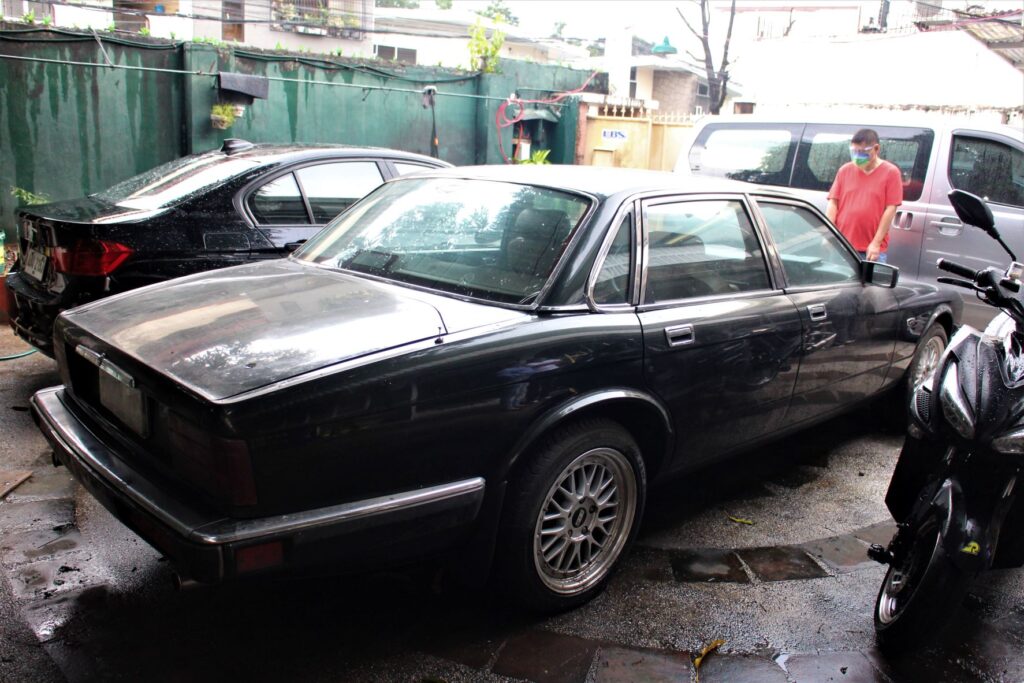 On September 15, 2021,  JSK proprietor Johnson Tan personally went to see and inspect the cars as well as speak with Rodger to learn about his plans for the two XJ40s’ restoration. Rodger invited us to view the 1989 XJ6 first, which he said was once used by an ambassador. It was finished in a dark hue of Jaguar Racing Green with a biscuit or light tan interior, was fitted with aftermarket BBS alloy wheels, and comes with the original 4.0-liter twin-cam 24-valve AJ6 inline 6-cylinder engine under its long hood.  It was supposed to be a starting-and-running car, except for a dead battery. 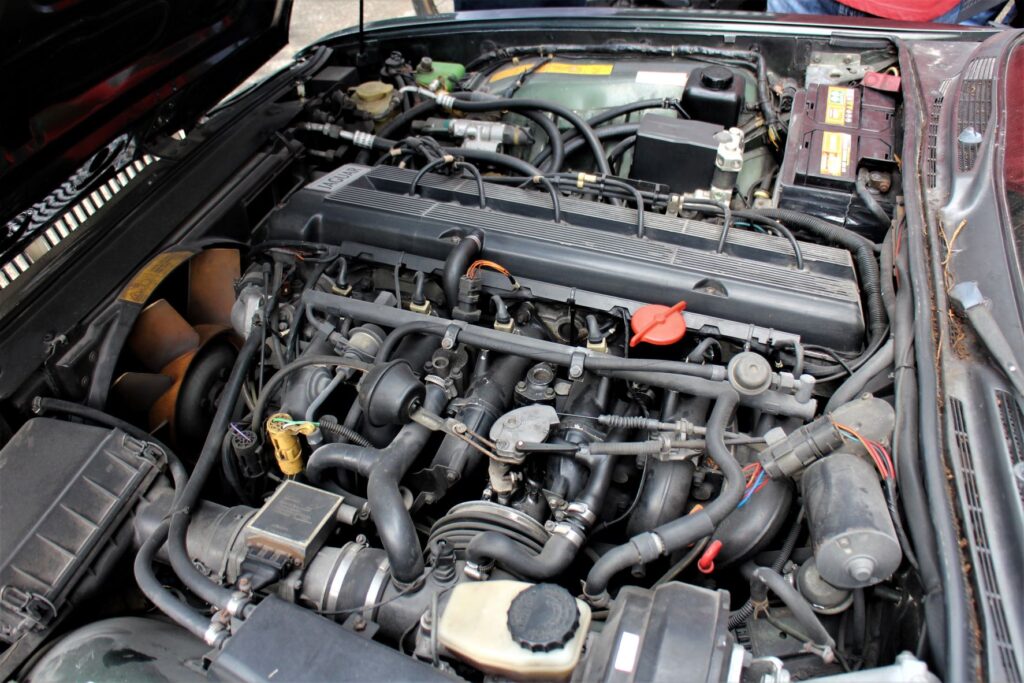 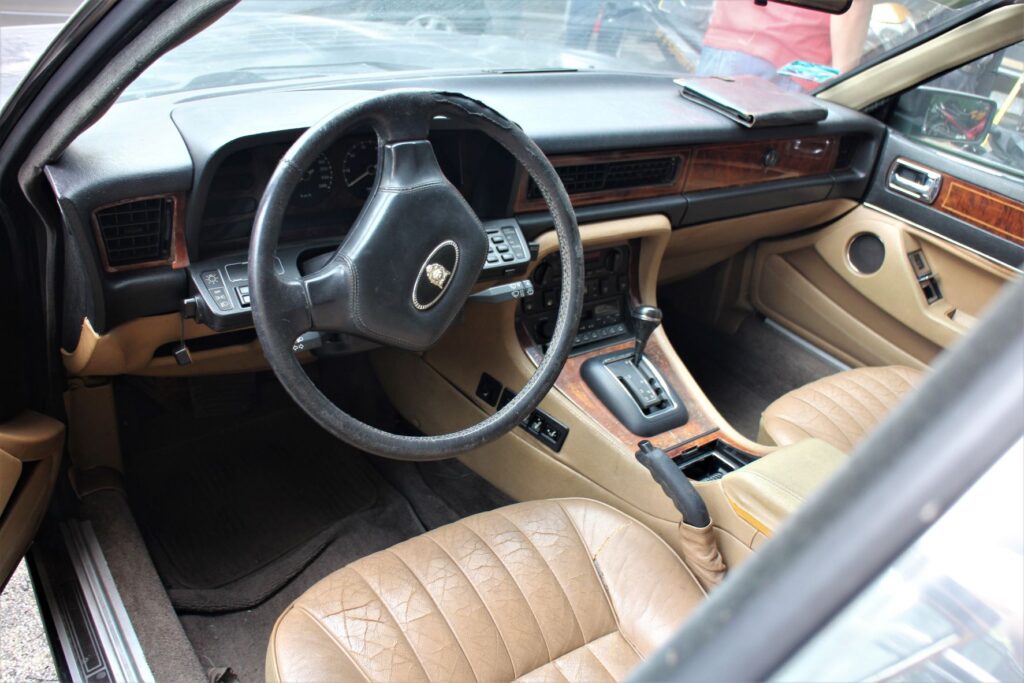 Biscuit or light tan interior seems to be in good nick and just needs some TLC.

We’re Restoring the Parts Car, Too!

Rodger then took us to another location where his other Jaguar XJ40, a 1990 XJ6, was parked. He told us that his initial plan was just to cannibalize this car for parts that he can use for the green car. “At first, I was thinking of getting parts from this car to make the other Jaguar perfect”, stated Rodger. “But then, I learned that the XJ40 was considered by many as ‘the last real Jaguar‘ because it was the last model that the late Jaguar Cars founder William Lyons had a hand in creating. So, I decided to restore both cars and give them to my two sons.” 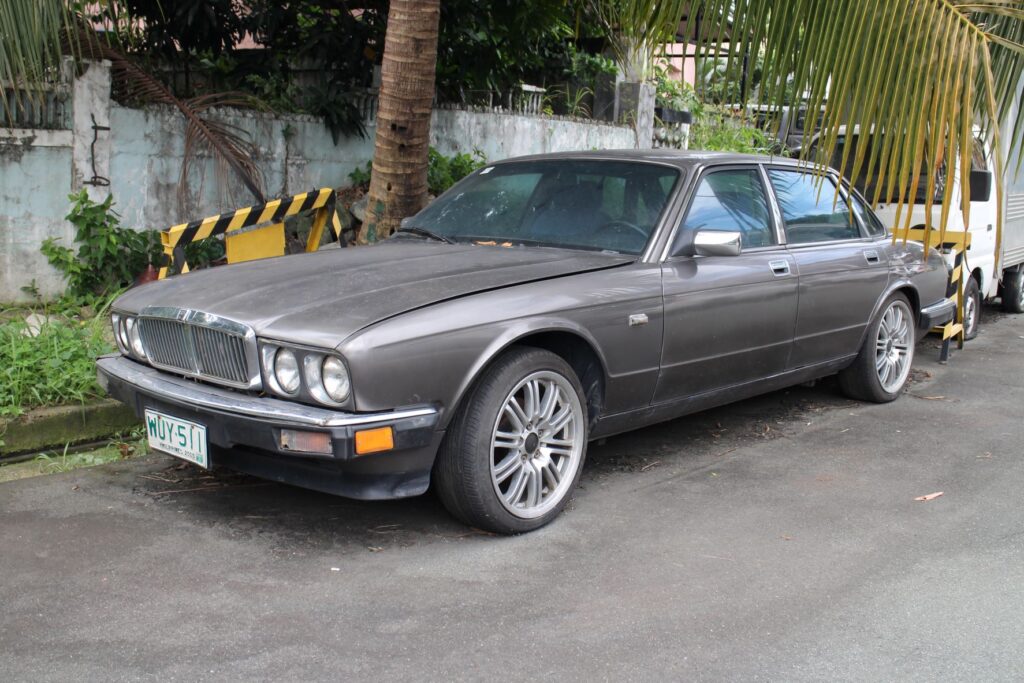 The body of Rodger’s other Jaguar looks more weathered than the green one. 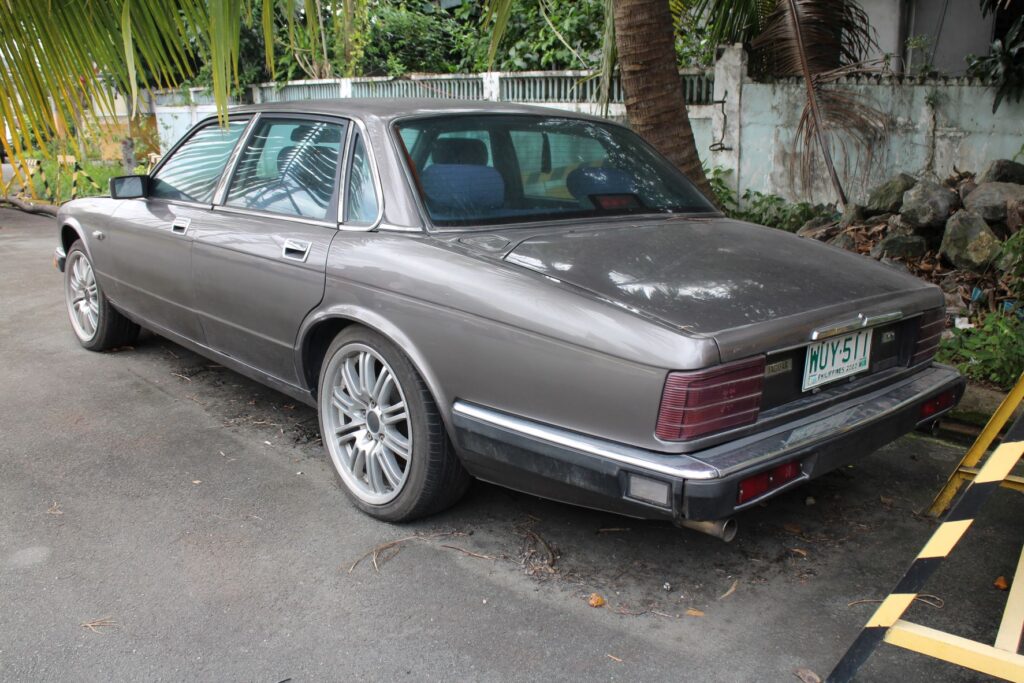 Like the green one, the Jag also sports aftermarket wheels and tires. The blue glass is unique.

Upon closer inspection, we found that the 1990 XJ6 was finished in Savoy Grey Metallic, which was now faded and chipped in some places. We also found that this was originally a right hand drive model that was exported from the United Kingdom to Japan, which somehow got into the Philippines and was converted to left hand drive. Regardless of its origins, Rodger insisted that he wants to restore both cars as if they just came from the factory. He also wants both cars to be restored to good mechanical condition so that his sons won’t have any problems when they are driven in Metro Manila traffic. 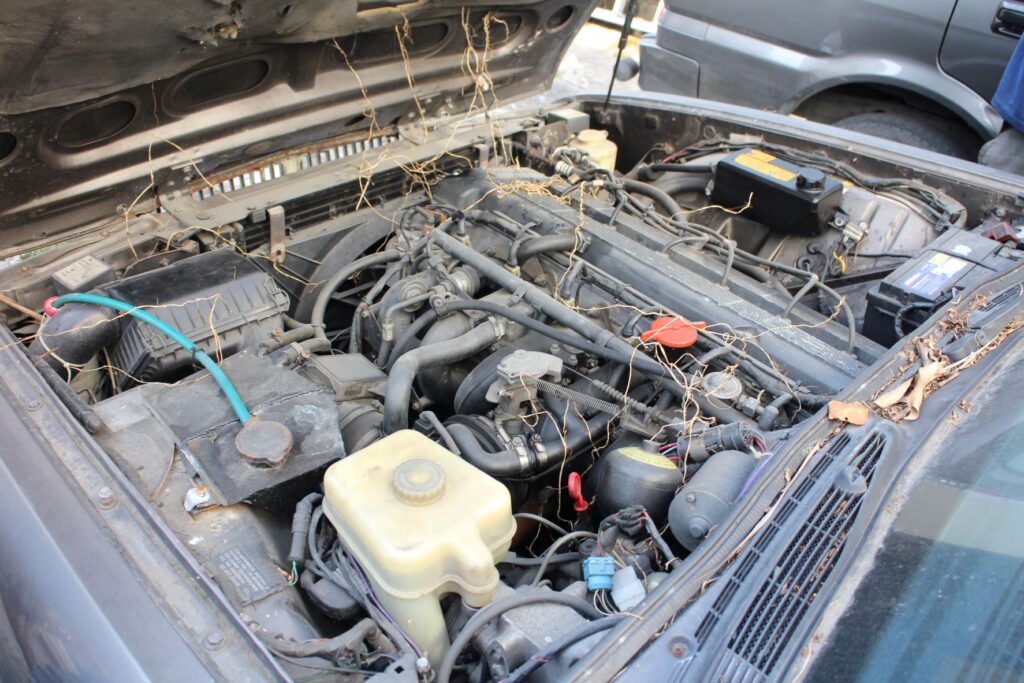 The grey XJ6 has the same 4,0-liter DOHC 24V inline-6 as the green one except it has additional “weeds”. 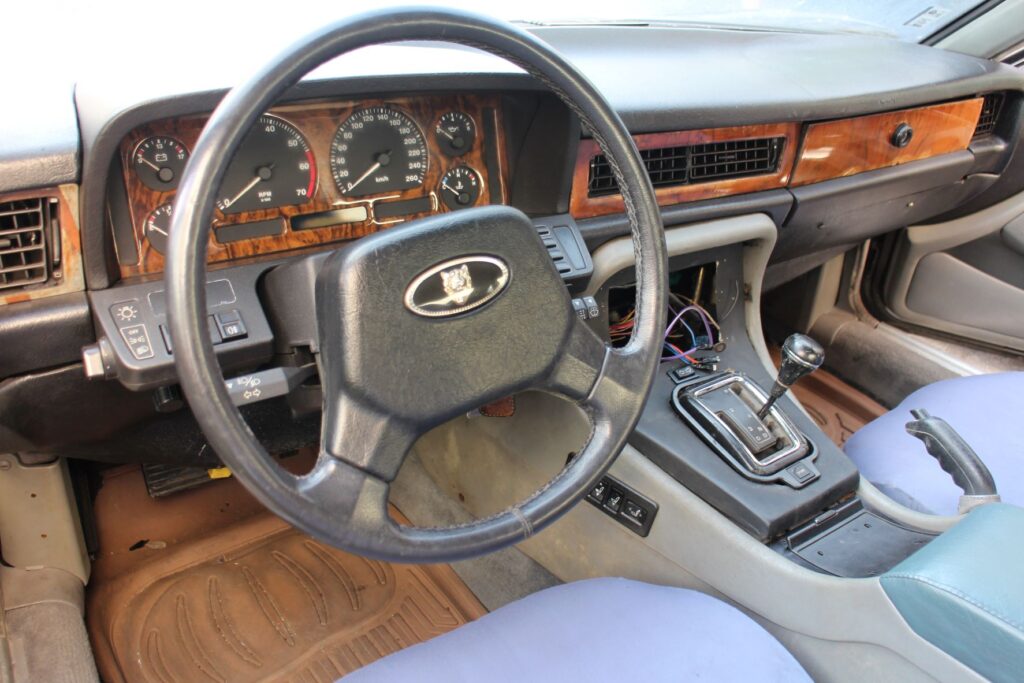 The grey interior of the 1990 XJ6 has some missing parts and needs a total makeover.

Transporting the Big Cats to JSK

After finalizing the details of the restoration project, the two Jaguars were scheduled to be picked up and transported to the JSK workshops in Marulas, Valenzuela City. At first, Rodger wanted to have one of the Jaguars towed by his company’s own flatbed truck but his business’ hectic schedule kept tying up their truck and driver, thus delaying the transfer. On September 29, 2021, Johnson arranged the two XJ40s to be picked up by the flatbed tow truck of Auto Transporter, one after the other. 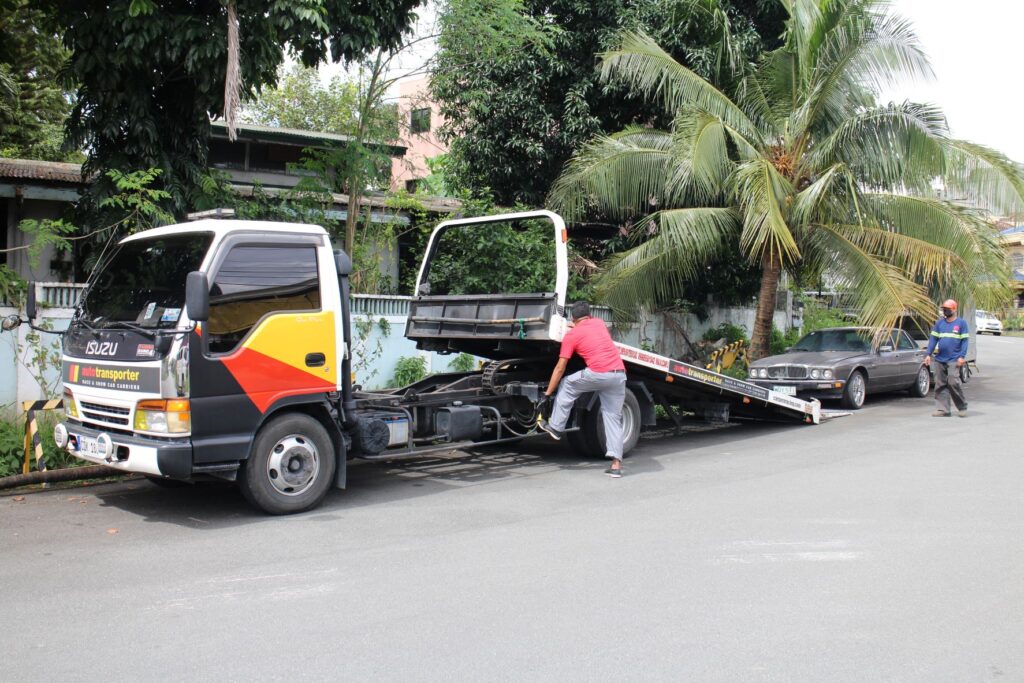 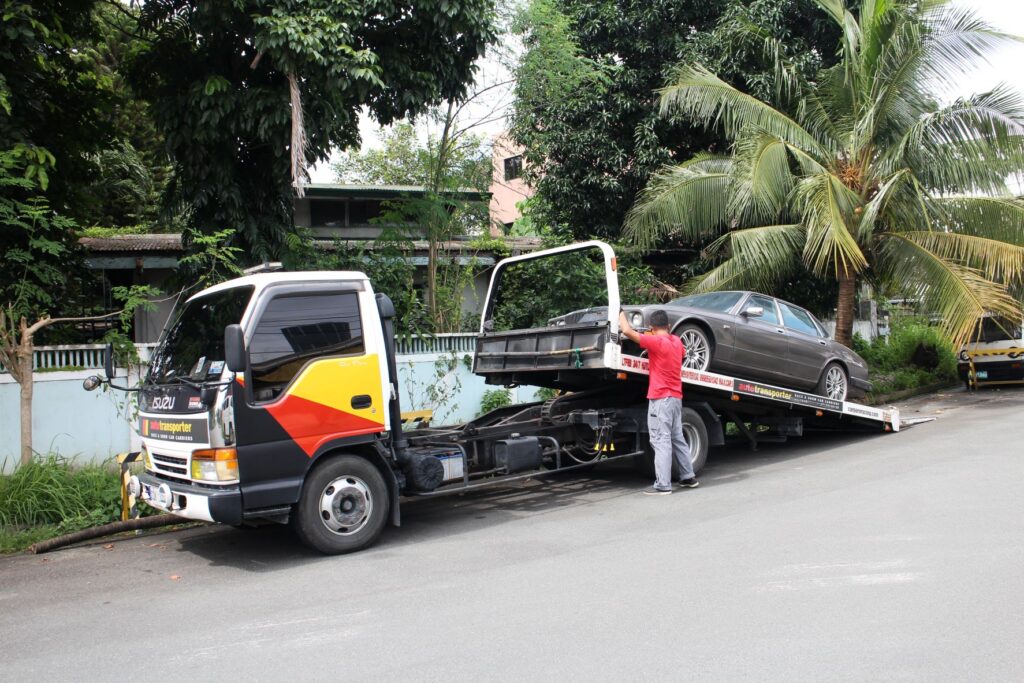 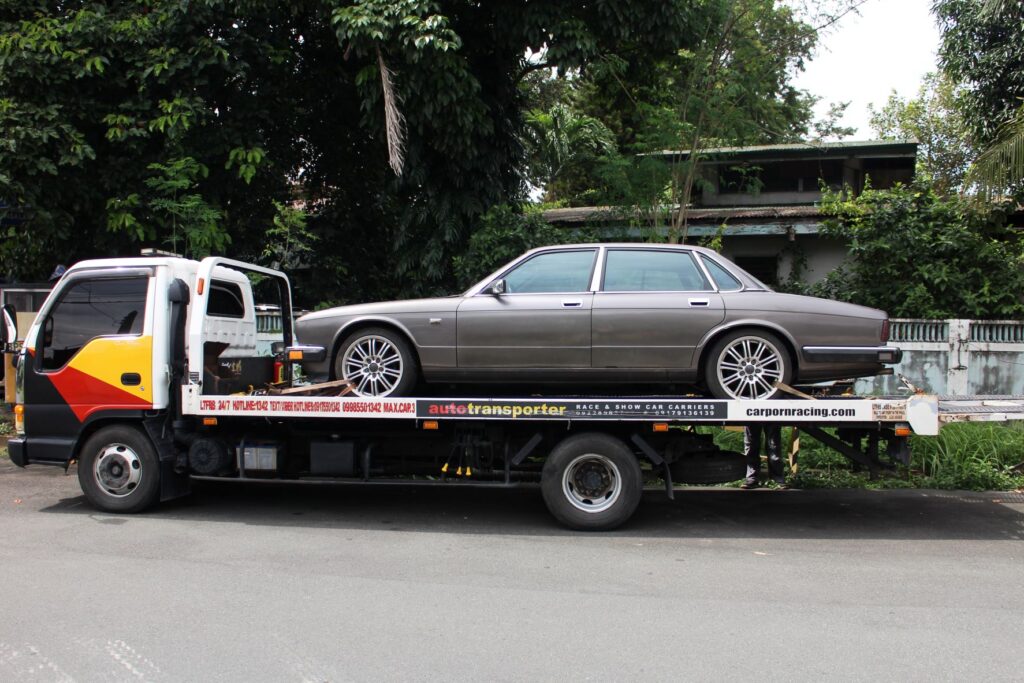 The grey 1990 XJ6 was picked up first in the afternoon and transported directly to the JSK workshop, where Johnson Tan and his team of mechanics were already waiting to receive the car. 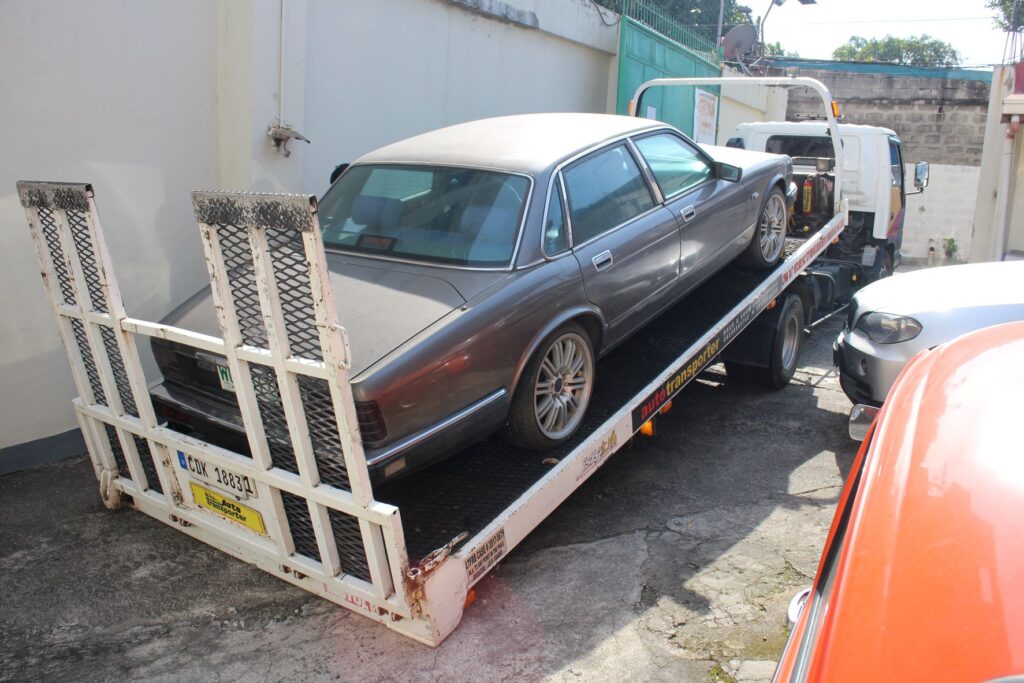 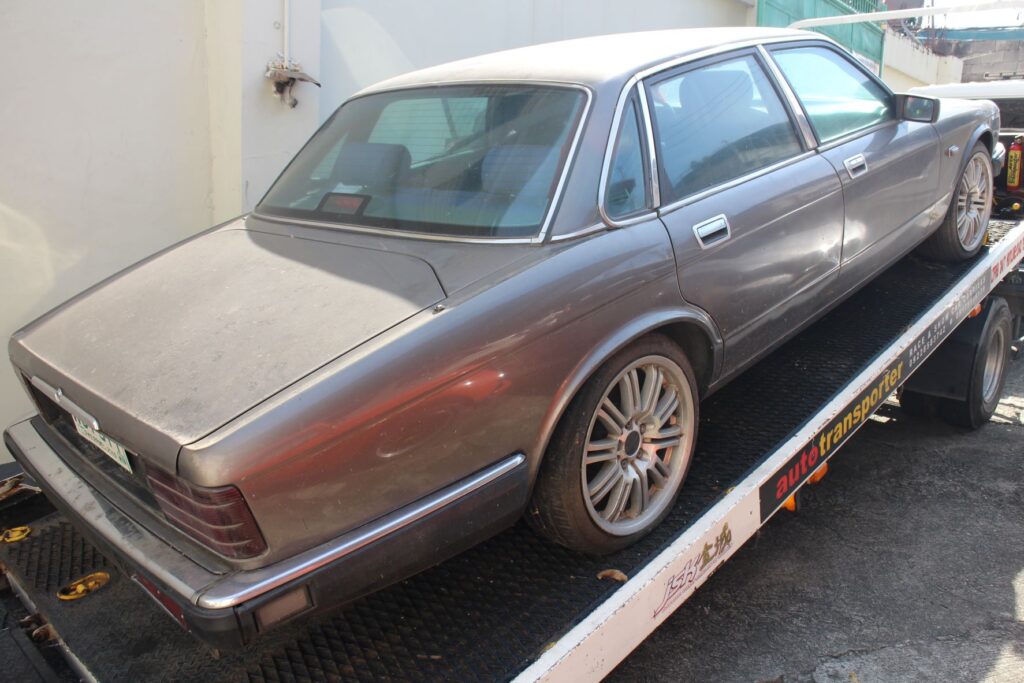 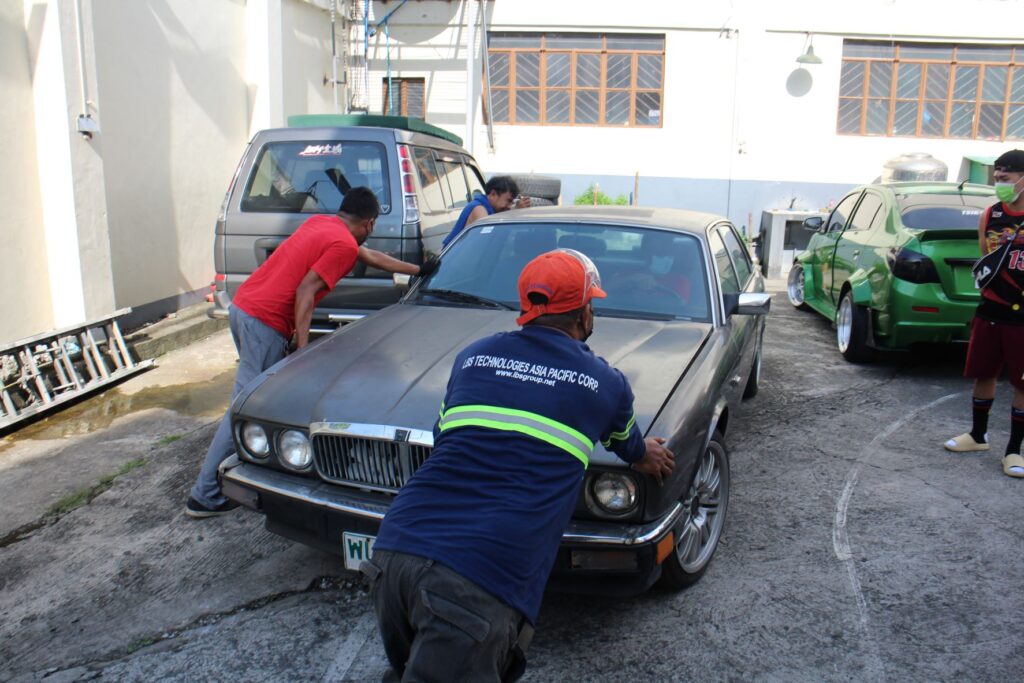 The Auto Transporter flatbed responded to another towing customer before it was able to pick up the green 1989 XJ6 in the evening. The second Jaguar arrived at JSK at nearly 10:00 PM where Johnson and some of his JSK crew were still waiting. 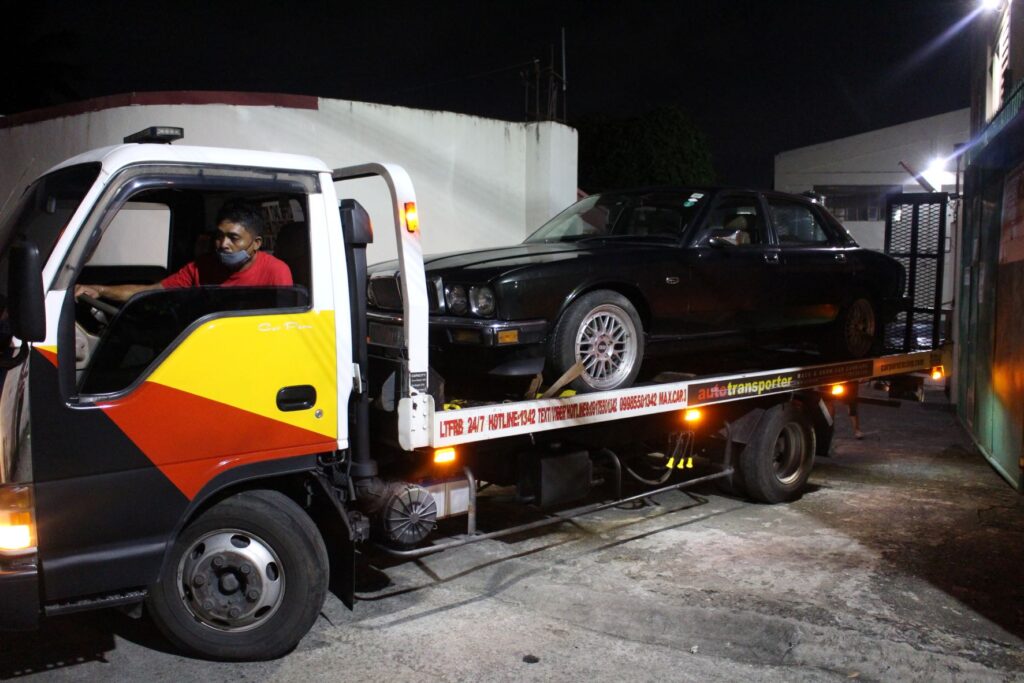 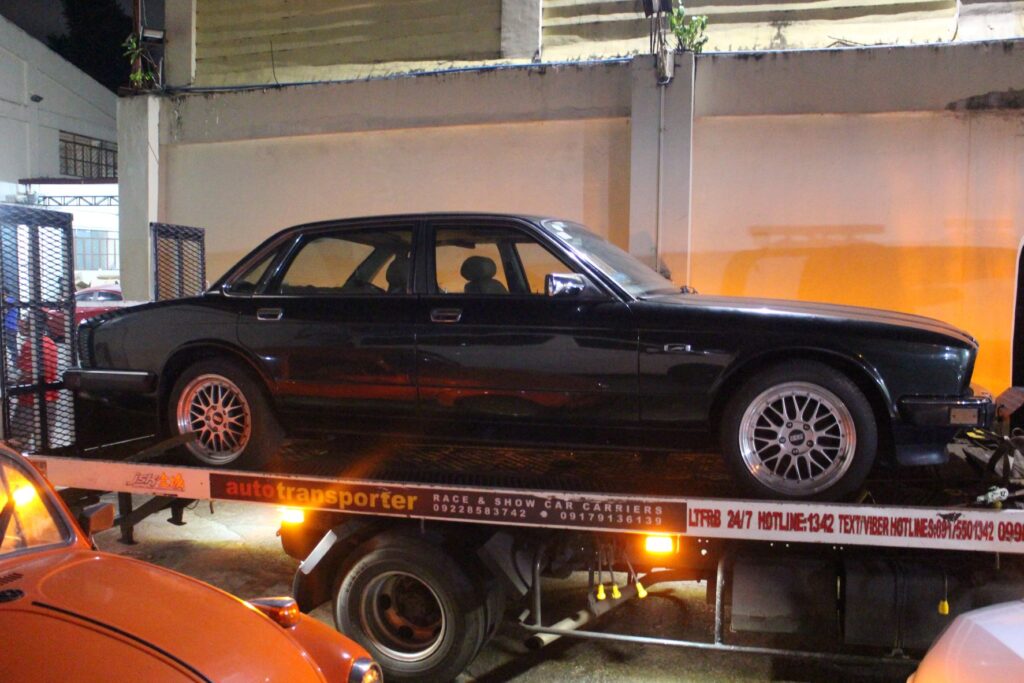 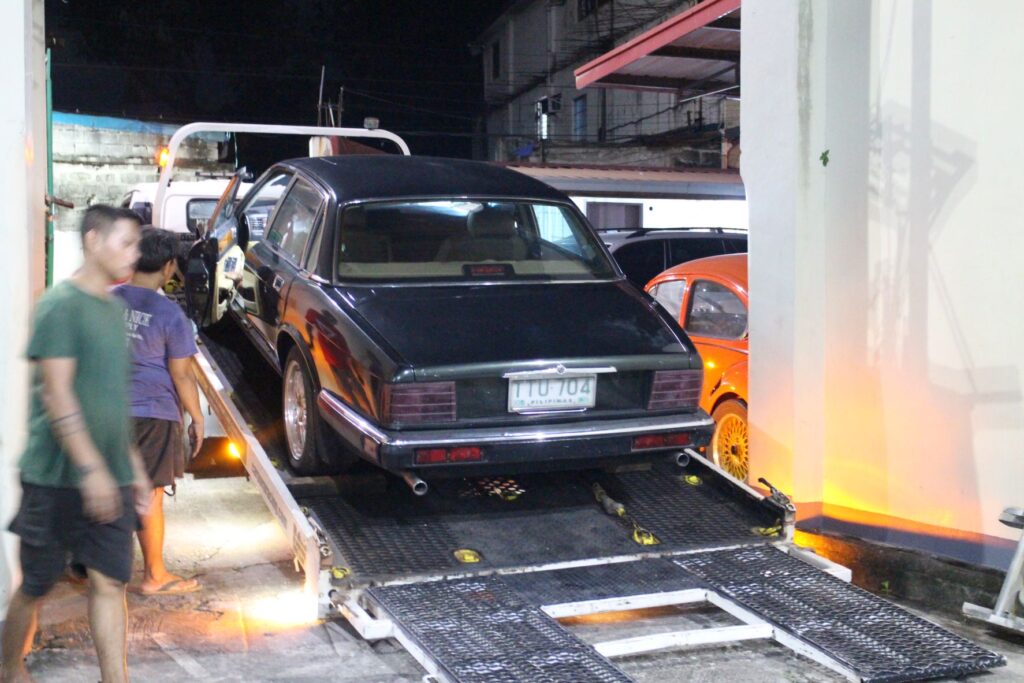 With the two XJ40s parked side-by-side at his workshop, Johnson could clearly assess the work that are needed to restore each one. He observed that the front portion of the grey 1990 XJ6 looked like it was involved in a shunt and will need more work than the green 1989 XJ6, which seem to be in perfect alignment. He finds the white blades of the auxiliary fan peeking from inside the grille of the grey car makes the car look cheap and he wants it removed immediately. The single-arm wiper’s resting position at the right and the location of the hand brake at the passenger side confirmed that the grey car was a right hand drive model that was converted to left hand drive. 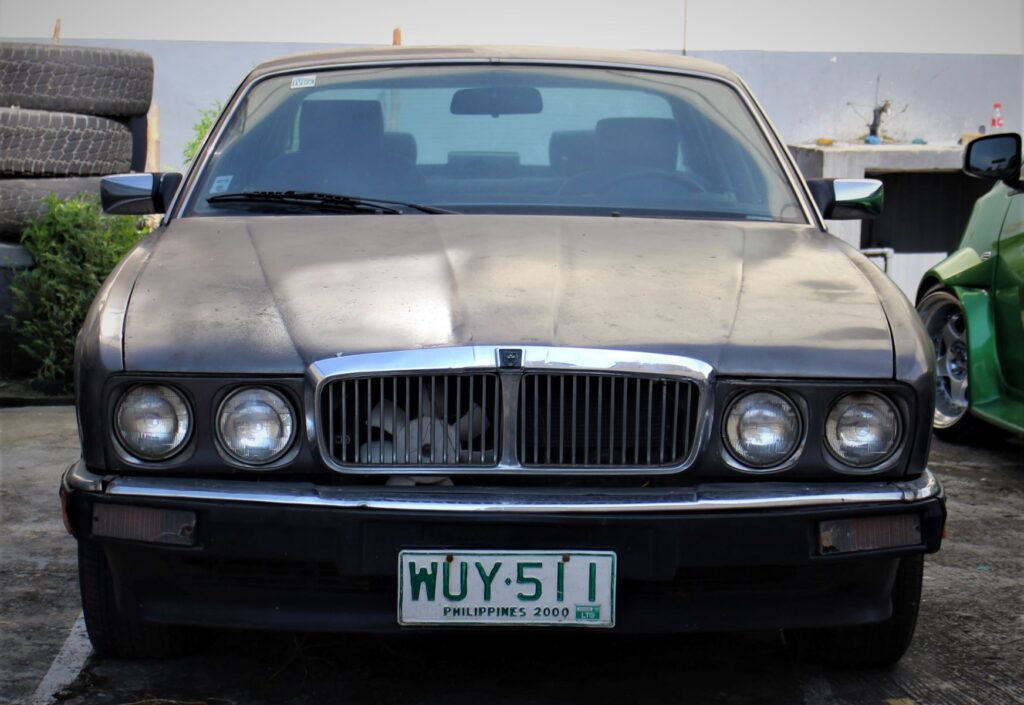 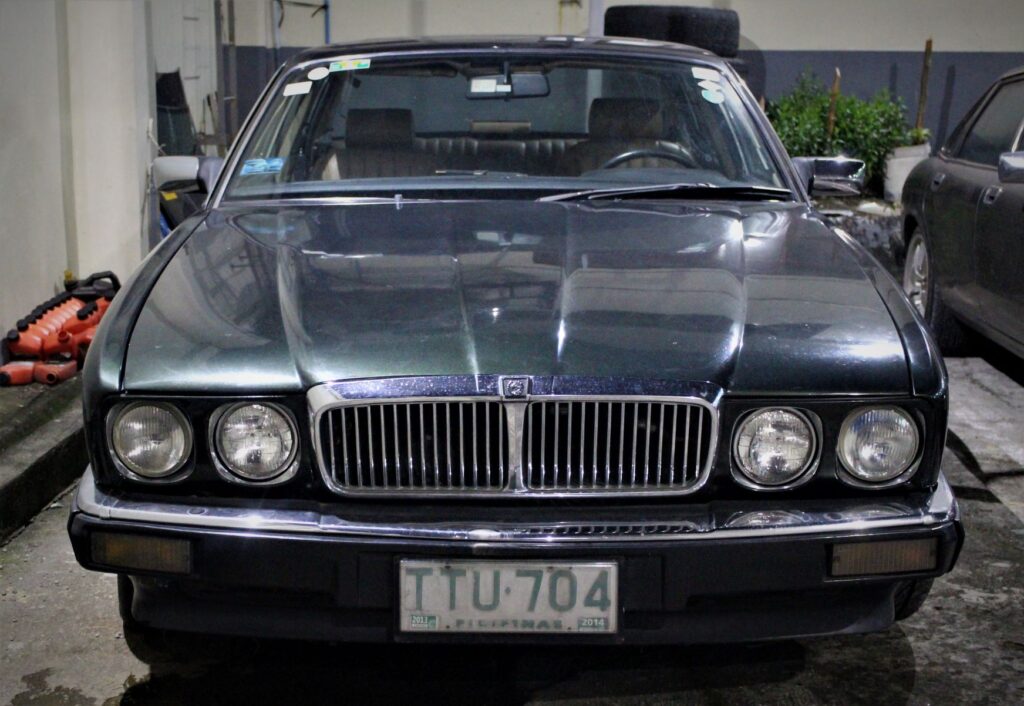 Comparing the cars from the back, he noticed that rear of the grey Jag was lower than the green one probably because its springs and dampers, err… shock absorbers are already perished and sagging. He noticed that rust were beginning to form under the doors. He plans to use the green Jaguar as the template for the correct alignment of the body panels of the grey car and plans to strip the grey car to bare metal after his guys have checked the drivetrain and made the car start and run. 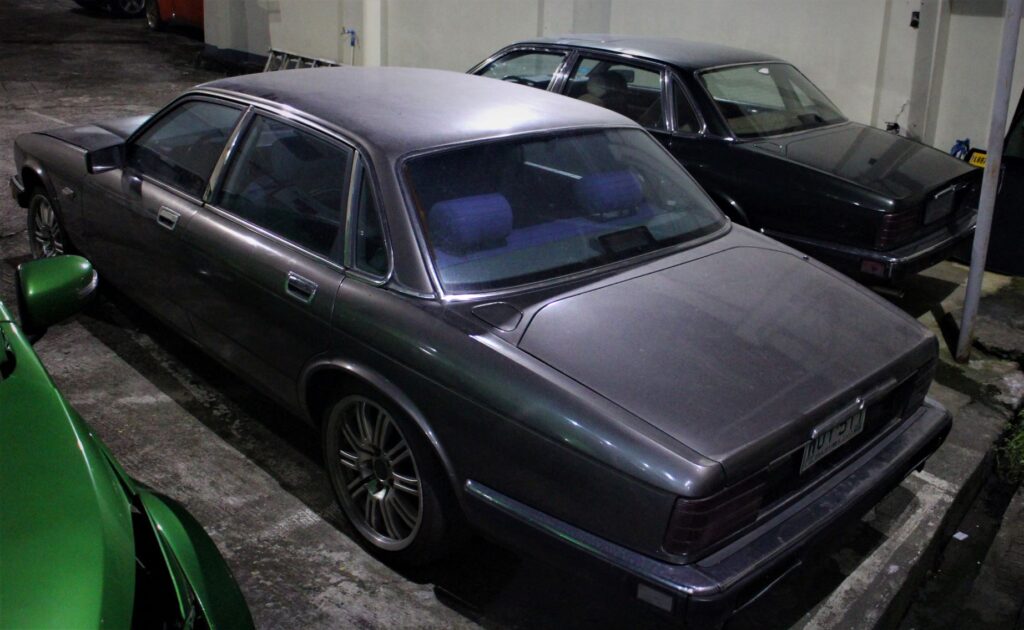 Stay tuned as we chronicle the restoration of these two Jaguar XJ40s here in the website of Power Wheels Magazine! 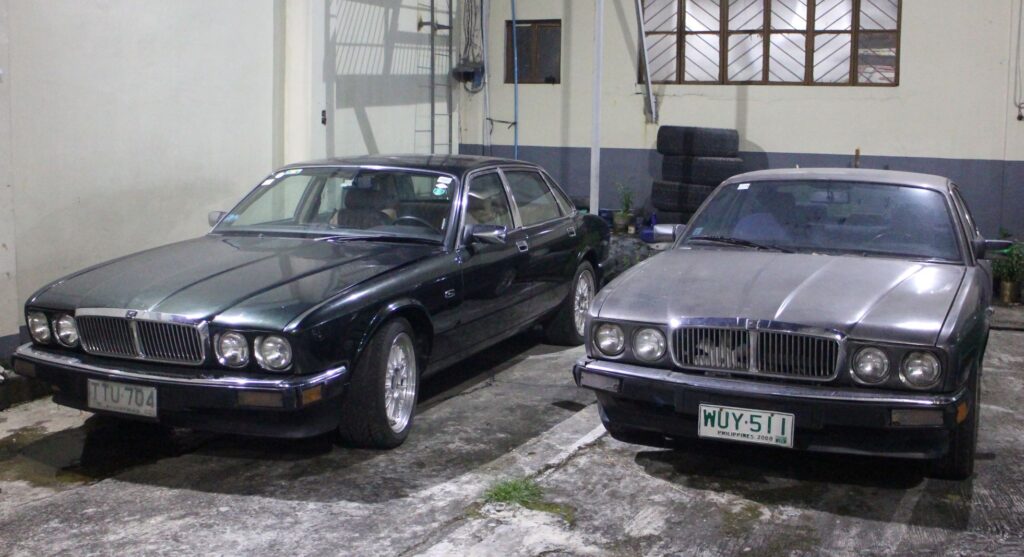