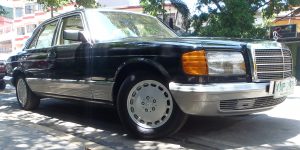 My mom taught me an adage that was passed on to her early in life: “Lahat ay mahal kapag wala kang pera. Lahat ay mura kung meron. (Everything is expensive if you don’t have money. Everything is cheap when you have.)” I am reminded of this wise old saying after our finances were reduced when we shifted our magazine business from printed media to digital. Our reduced funds meant that we have to sell some of our finished project cars and cut down on our other restoration projects for the mean time, and that includes our 1986 Mercedes-Benz 500SE. 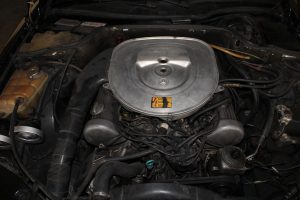 After spending more than our planned budget on restoring the performance of its M117 V8 engine, refurbishing its Benz2 wheels, and wrapping these with Yokohama BluEarth tires, we began to realize that restoring this German luxury car will not be cheap. Our initial goal with this project was to see if we can acquire, own and maintain a Mercedes-Benz S-Class as inexpensively as we could. However, we must now submit to the realization that we maybe way over our heads with our W126 project car. 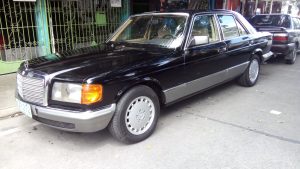 Therefore, we decided to reassess our plans and prioritize the areas of repairs that’ll make our 500SE more roadworthy. First on our agenda is the cooling system: We observed that the coolant temperature goes above 100 degrees Celsius after a just a few minutes of operation. Initially, we thought it was a stuck thermostat so we temporarily removed it, but the overheating problem remained. So we reexamined the system. It could be an errant water pump, a collapsed hose, or a blocked radiator but whatever it is, we couldn’t find any leak in the system. We’ve been getting a lot of advice from various W126 experts and we plan to have the radiator checked first before trying other repairs. We hope to fix the cooling system so the valves will stop “clicking” when the temperature goes up. Otherwise, we could be looking at more expensive repair bills. 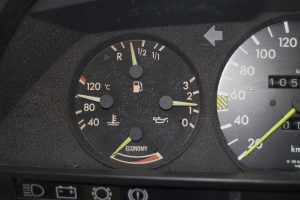 The needle of the temperature gauge points above 100 degrees. 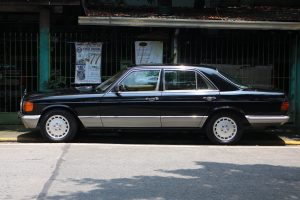 We drive around the block for a few minutes to get its juices flowing and then park it.

Next, we plan to have the factory air-conditioning system checked. It used to blow cold air when we bought the car but the cold air wasn’t blowing when we drove it home after its 22-month stay at German Motors. After a close examination, we found that the electromagnetic clutch wasn’t engaging the compressor to the belt drive. We were able to engage the A/C clutch by manually pushing it with a rod but it would eventually disengage when the temperature inside the cabin reaches the desired settings. It eventually threw out the belt. We know that it’s an easy fix but we’d also like to have the A/C system cleaned and charged with fresh refrigerants as well. 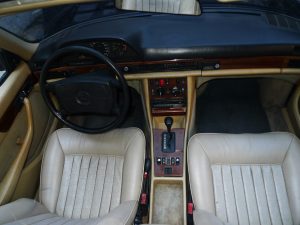 The A/C system must be thoroughly checked, cleaned and charged… 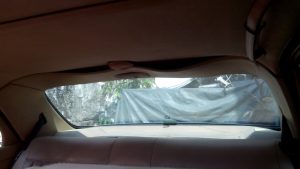 … while the interior panels must be sorted out as well.

It is common knowledge that cars were designed to be on the move. Cars that are parked for an extended period of time will eventually develop leaks and other problems. Since we can only drive our 500SE for short distances because of its tendency to overheat, we fire up the engine every so often, warm it up, take the car for a short drive, and then park it before the temperature gauge hits 120 degrees Celsius. We start and drive it at least once every two weeks to charge the battery, lubricate the rotating parts, and avoid flat spots developing on the tires. A least once a month, we drive it to a carwash for a quick wash-and-wax and then to a gas station for some fuel in the tank and some air in the tires. 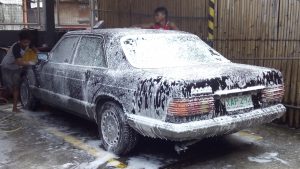 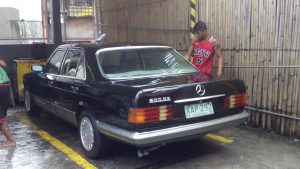 … wiped down, vacuumed and waxed to protect the finish. 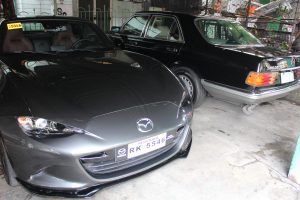 While we were cleaning our W126, we found some rust around the sunroof rails and under the rear parcel tray but deduced that these can easily be fixed by a competent body shop. We also noticed that the left side of the rear panel between the tail light and the license plate had a slight curve while the right side was flat as Bruno Sacco designed it and as the Mercedes-Benz Sindelfingen plant made it. I guess that the left rear panel was slightly damaged in a minor fender bender and that the repair was done rather cheaply. While it can also be repaired quite easily, it is a costly reminder that when you buy a used car, you inherit the previous owner’s problems. 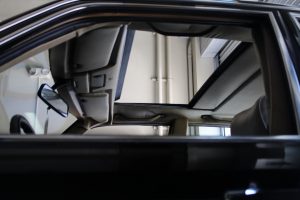 A nice roof opening like this comes at a price… 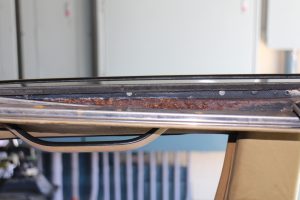 Rust is forming at the right sunroof rail… 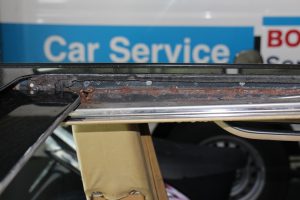 … as well as the left side. 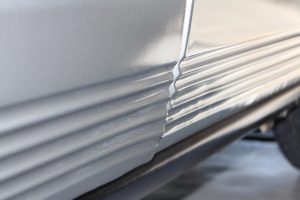 The plastic side garnishes need to be massaged and aligned. 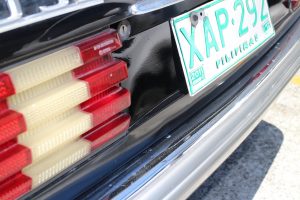 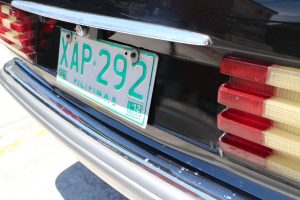 … compared to the other side which is straight. The entire panel needs to be corrected.

We learned that we need to have its registration renewed. We acquired the car in 2013 but it spent three years in various workshops and the last three years in storage. The registration renewal at LTO will be quite expensive because our Mercedes hasn’t been on the road for more than five years. We will have to pay two-and-a-half times the regular registration expenses, which will include the penalties. After the registration, we plan to have the front wheel alignment checked and the steering wheel adjusted because it’s pointed a bit to the left when the car is going straight. 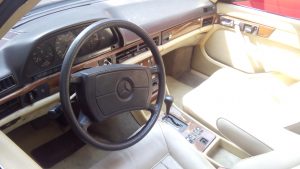 The steering wheel is not centered when the car is moving.

Just when we thought that we already laid down a solid plan to get our 500SE back on the road, life throws us a curve. Unexpectedly, a pin on the passenger side or right hood hinge suddenly sheared in half while we were opening the hood. The pin sheared with a bang, caused the hood to lose its alignment with the front fenders and the radiator support, and scratched the paint but thankfully didn’t crack or scratch the windshield. (Whew!) When that happened, we can’t get the hood to close properly. We looked online for a replacement passenger side hood hinge and was offered a used one by a local seller for P3,800. We didn’t take it because there was a new old stock (NOS) driver’s side W126 hood hinge being sold for only P3,500. We’d rather wait for a NOS one, thank you. Then, as if we didn’t have enough problems, our 500SE’s 5-year-old Bosch car battery died. We immediately replaced it with a Control Plus 60038 car battery supplied to us by our good friend Brian Kaw, who also distributes Amaron and Hitachi car batteries. When we finally got the brand new battery installed and the engine running, we found that the left front disc pads has began to stick to the disc rotor, perhaps because of a stuck or rusted piston. Aarrgghh! 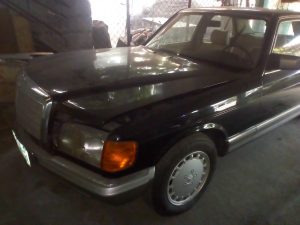 Snap! A pin on the right hood hinge sheared… 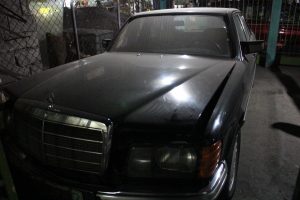 … and caused the hood to be misaligned and the project to be mothballed temporarily. 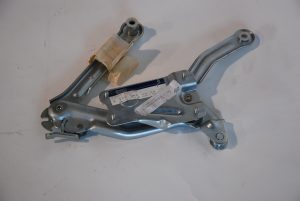 We need a new old stock (NOS) right side hood hinge for our W126. 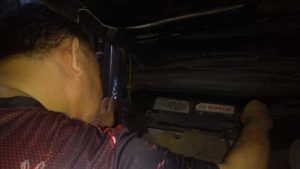 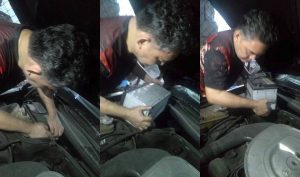 … we had to remove it first from its cradle. It’s a bit heavy, man! 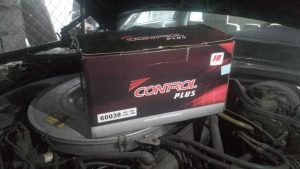 To install this brand new Control Plus 60038 car battery… 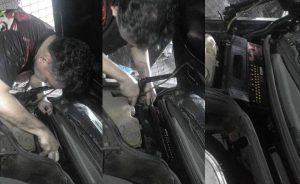 … we just have to reverse the process and install the car battery into the cradle. 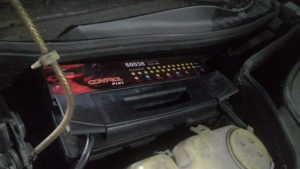 With the battery terminals tightened, the Control Plus 60038 car battery is ready for duty. 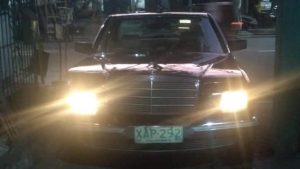 Our 500SE is alive once again!

Automotive restoration is often romanticized as a hobby for car enthusiasts with the vision to see the finished project despite the car’s current state of disrepair; the fortitude to see the project through thick and thin; and the capability to fund the restoration work all the way. While car restoration can be therapeutic and fun, we realized that without the capability, i.e. the funds, the dark and often frustrating side of the hobby has a tendency to overwhelm the restorer. In response to my mom’s wise old adage, I always like to jest, “The spirit is willing but the flesh is weak especially when there’s an absence of cash.” Tune in next time as we try to develop an alternative plan to keep our project cars viable. 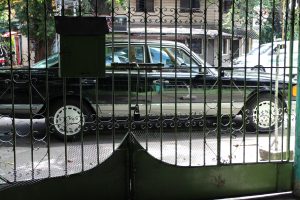