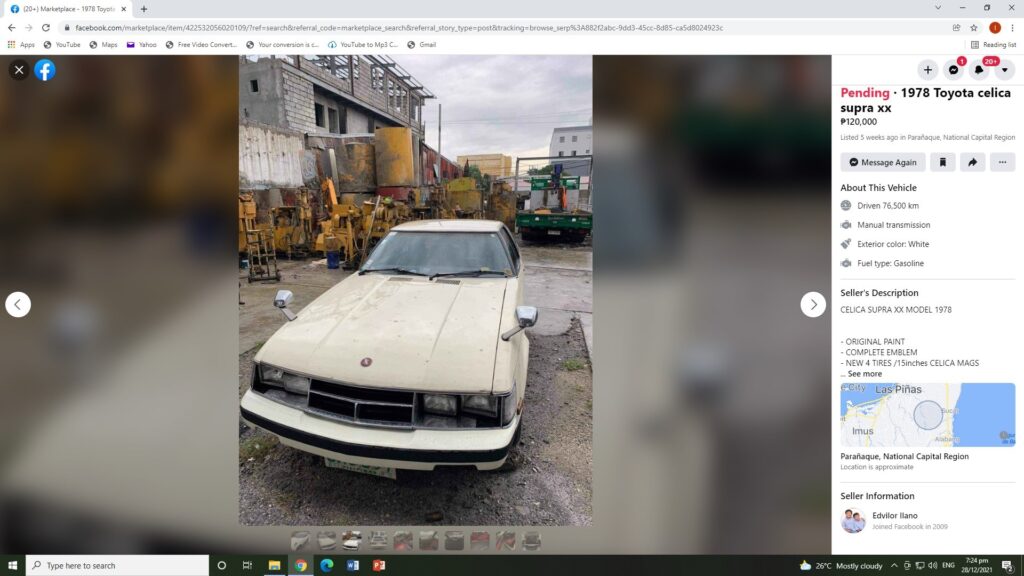 It wasn’t just the car that caught our eye when we were browsing the vehicles for sale on Facebook Market Place but the seller’s asking price: P120,000 is far too cheap for a 1978 Toyota Celica XX Supra. Based on the article “Here’s What The 1978 Toyota Celica Supra Costs Today” posted at hotcars.com last December 17, 2021, the prices of the first-generation Supra hovers around US$13,000 (P650,000) at car auctions, with cars in rough but restorable condition valued at $6,000 (P300,000) at the low end and cars in pristine showroom condition fetching $25,000 (P1,250,000). Our curiosity was piqued so we decided to take a closer look at the posted ad. 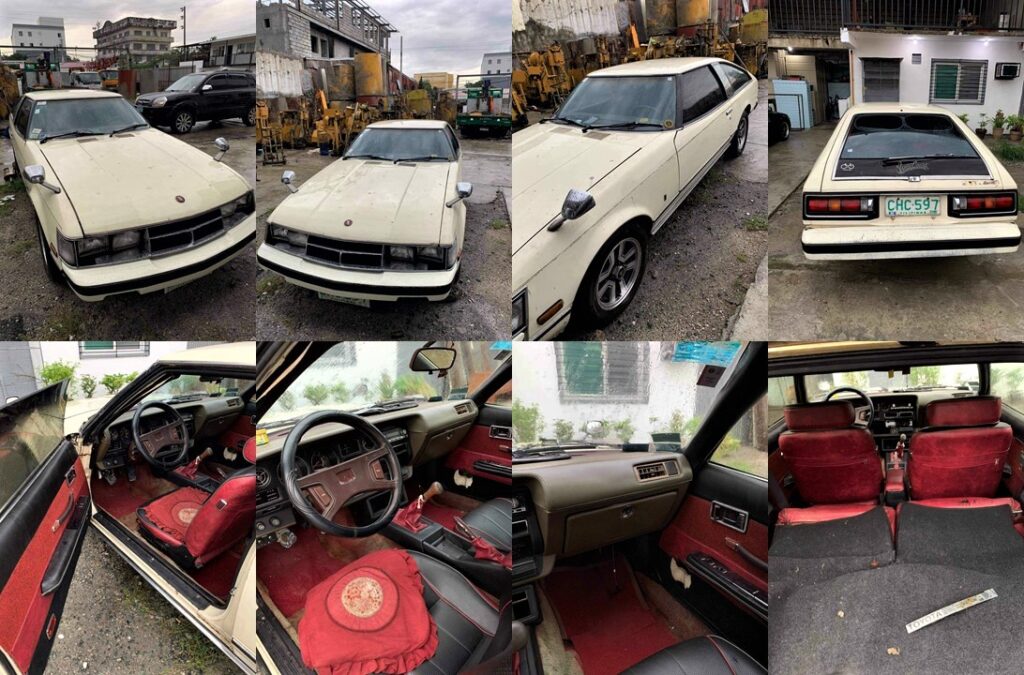 The seller described the car as having original paint, four new tires on 15-inch Celica wheels, with complete exterior emblems, functioning gauges in the instrument panel, and newly upholstered seats and sidings/door cards. Then came the clincher: a Toyota 12R single overhead camshaft (SOHC) 8-valve inline 4-cylinder engine was in the engine bay and not the original M-series SOHC 12-valve inline-6 that powered it when this Celica XX Supra left Toyota’s Tahara assembly plant in Aichi, Japan in 1978. No wonder the price went down from P180,000 when it was first posted several months back, to P150,000, and then to P120,000, but still with very few interested parties. We decided to set an appointment with the seller to view the car in person. 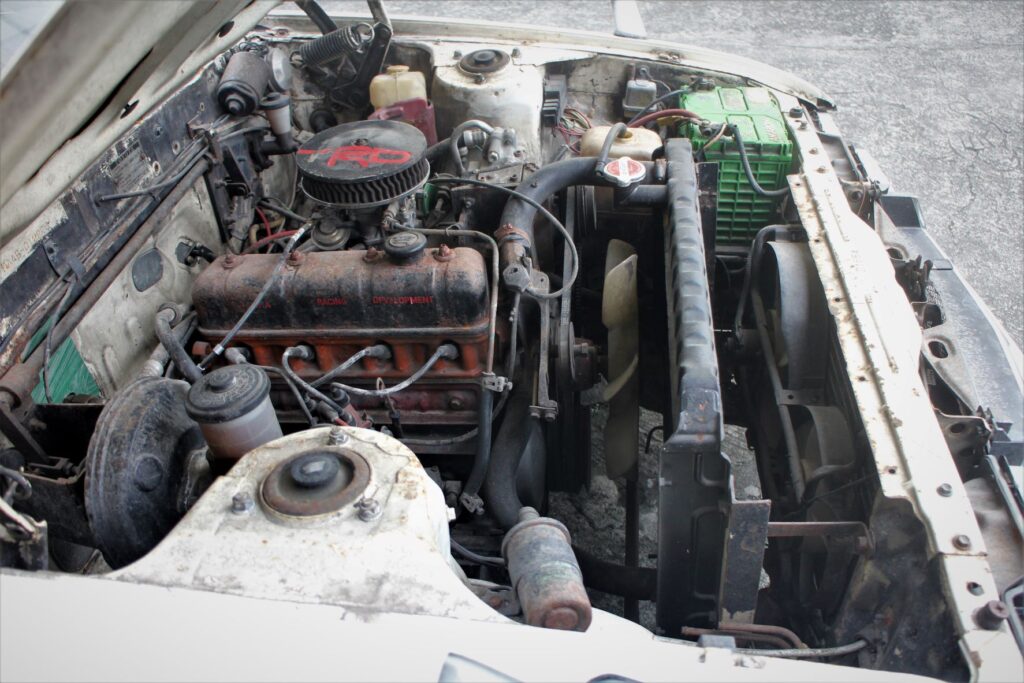 Face-to-Face with an Authentic Supra Enthusiast

We drove south to Sucat, Parañaque to see this white Celica XX (pronounced “Double X“) Supra on a rainy Sunday morning (December 19th), a few days before Christmas. We were greeted by the owner, Edvilor “Ed” Ilano, Jr., who turned out to be a real, authentic Supra enthusiast. He narrated that he bought this car from Bataan and paid P140,000 without first seeing or inspecting it beforehand. He bought it sight unseen because he regretted selling his former Supra collection, which included a black US-version 1st generation A40/A50 and the succeeding A60, A70 and A80 generations. He was going to build a new Supra collection starting with this white 1st-gen, a red 2nd-gen, and a maroon 3rd-gen, but soon realized that his business and growing family demands more time from him. 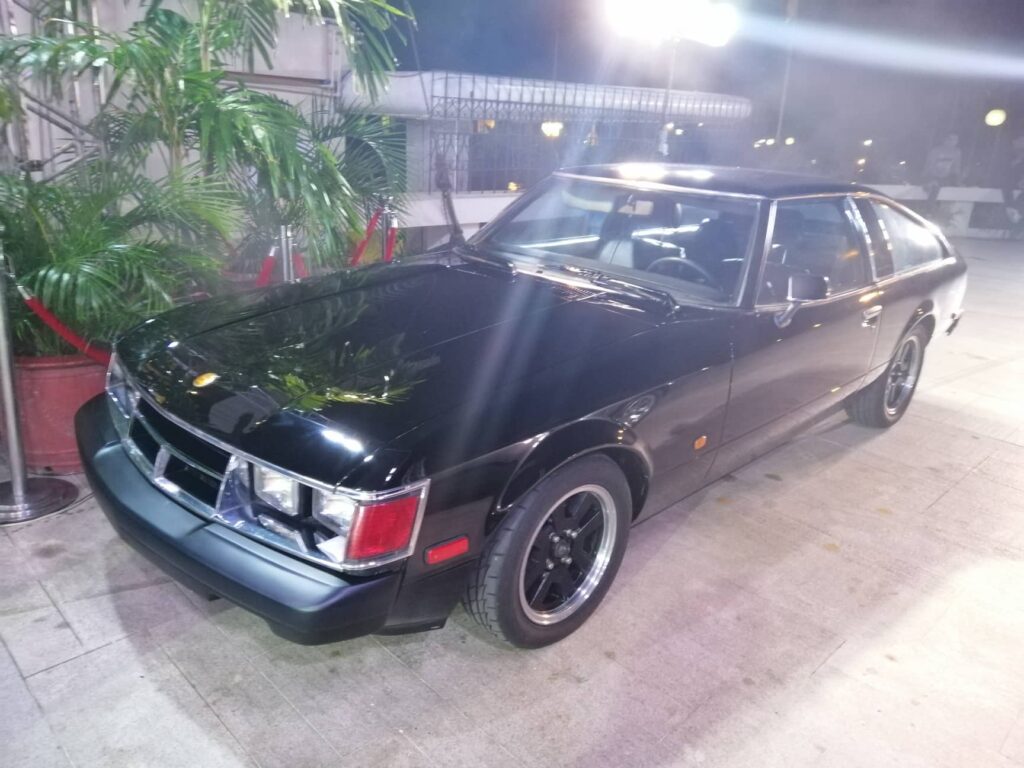 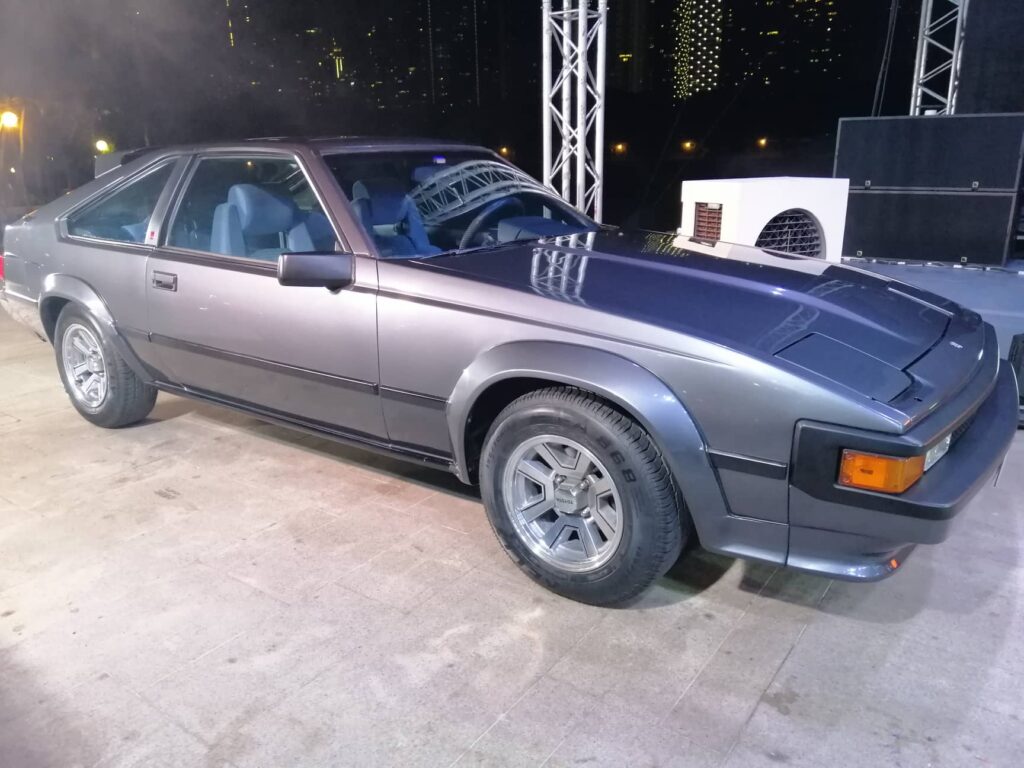 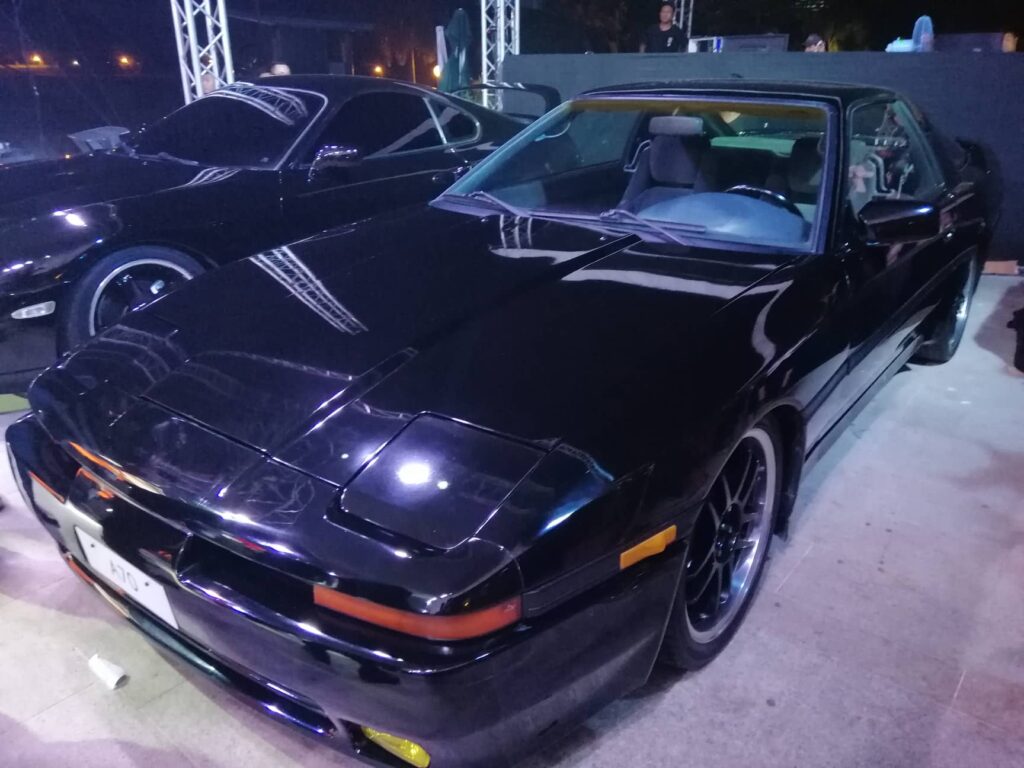 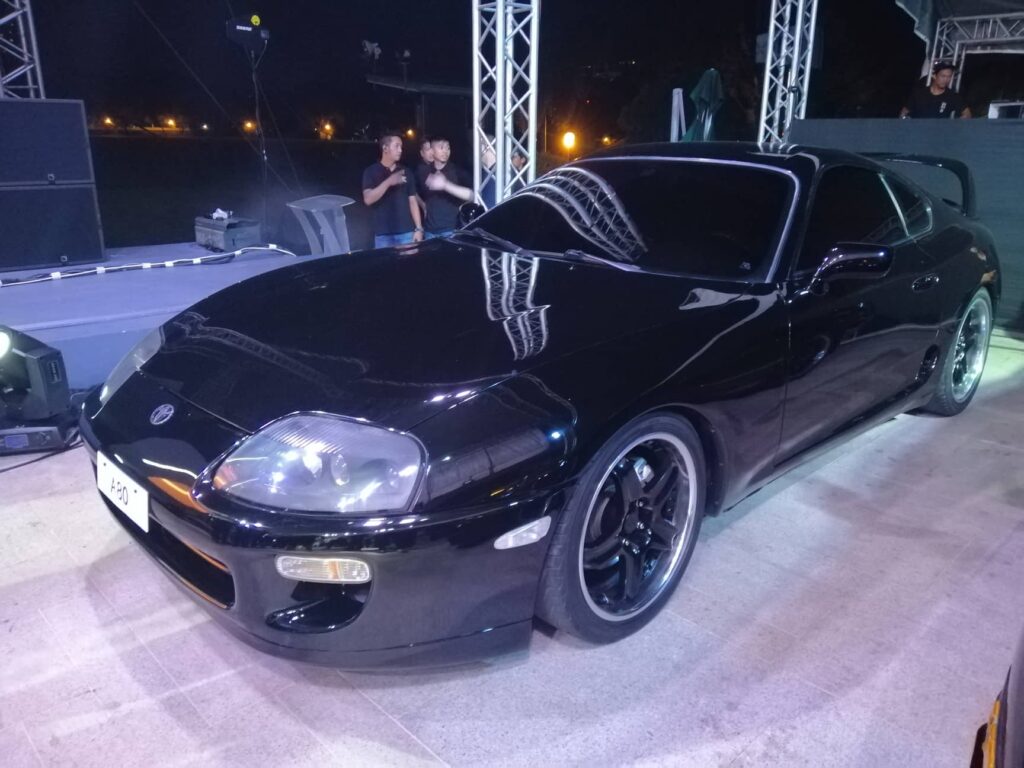 Ed pointed out that the white Celica XX Supra he’s selling is a first-year Japanese domestic market (JDM) model, thus it is designated as an A45 and must have left the factory as a right-hand-drive (RHD) model that was converted to left-hand-drive (LHD) when it was imported into the Philippines. He noted that Japanese RHD A40/A50 models were called “Celica XX Supra” while American LHD versions were simply called “Celica Supra” without the “Double X” nomenclature. He thinks that a previous owner installed the 12R 4-cylinder engine and 5-speed stick shift to replace the original drivetrain, which consists of the 125-horsepower 2.0-liter M-EU fuel-injected SOHC 12-valve inline-6 engine and A40D 4-speed automatic with overdrive that engages at 56 km/h, when it became difficult to maintain or repair. 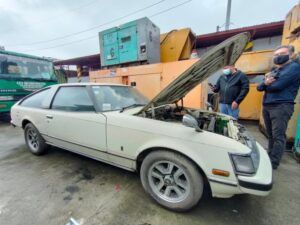 It was drizzling when we inspected the car but we enjoyed the Supra trivia with Ed. 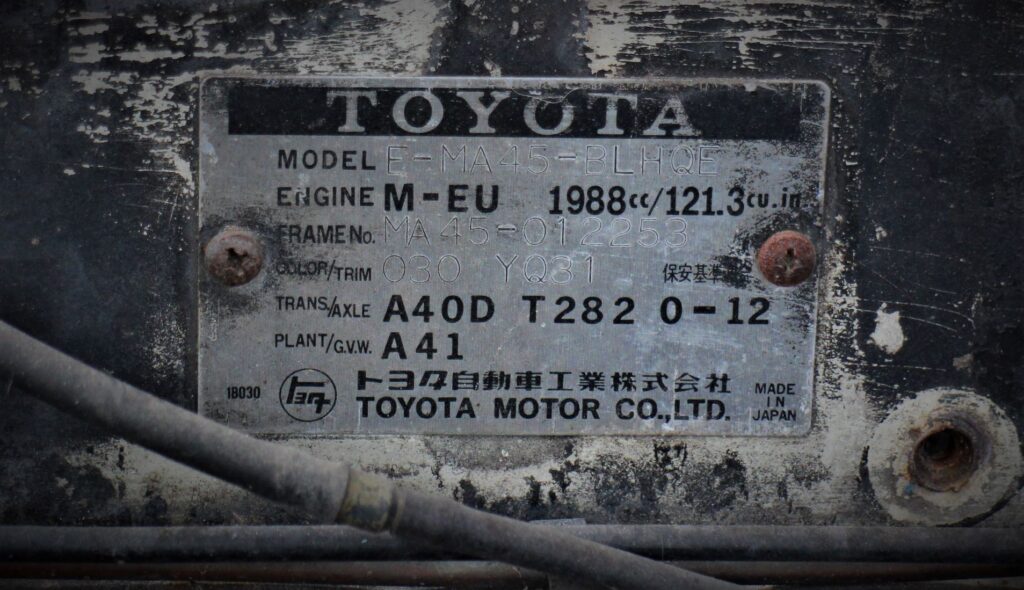 The VIN tag shows that this A45 (Celica XX Supra) originally came with a 1988cc M-EU inline-6 and A40D 4-speed automatic with overdrive. 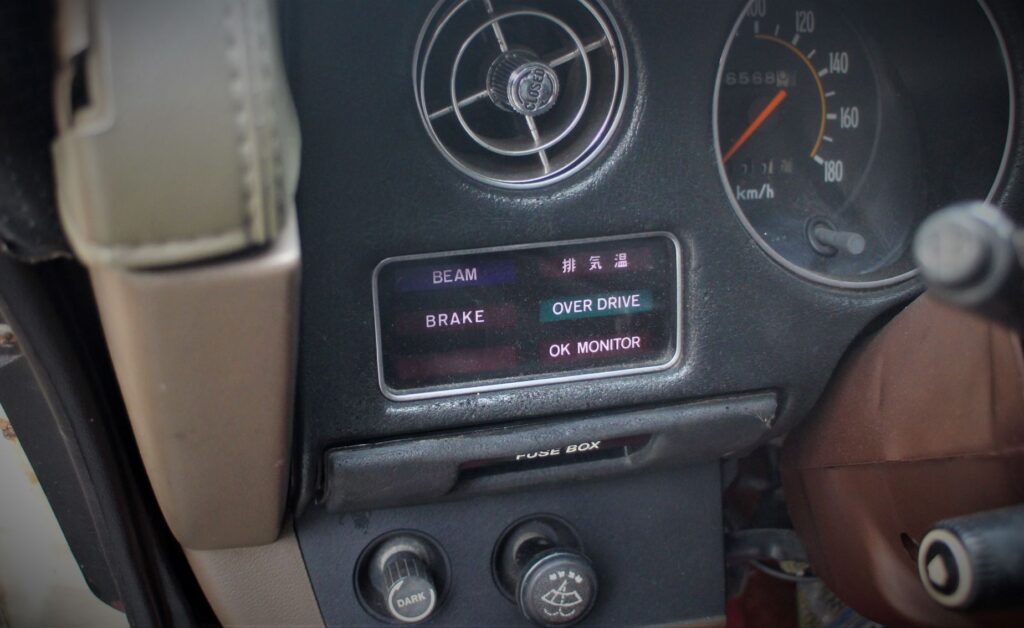 The “overdrive” indicator lights up when the original 4-speed automatic transmission kicks into overdrive at 56 km/h, primarily to enhance fuel economy. 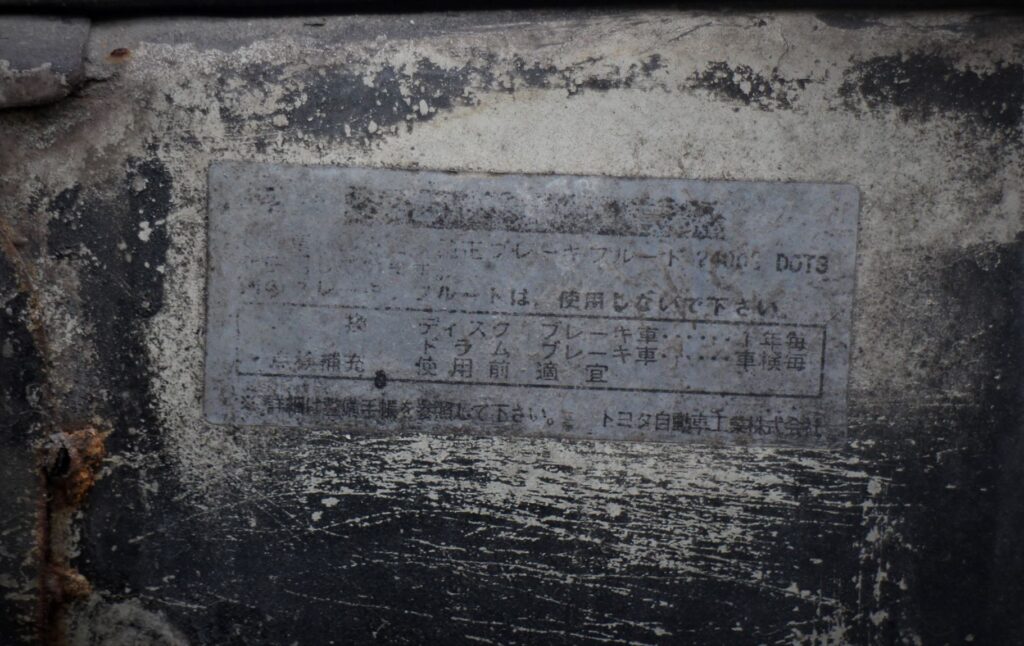 Under the long hood, faded stickers like this still cling to the original paint… 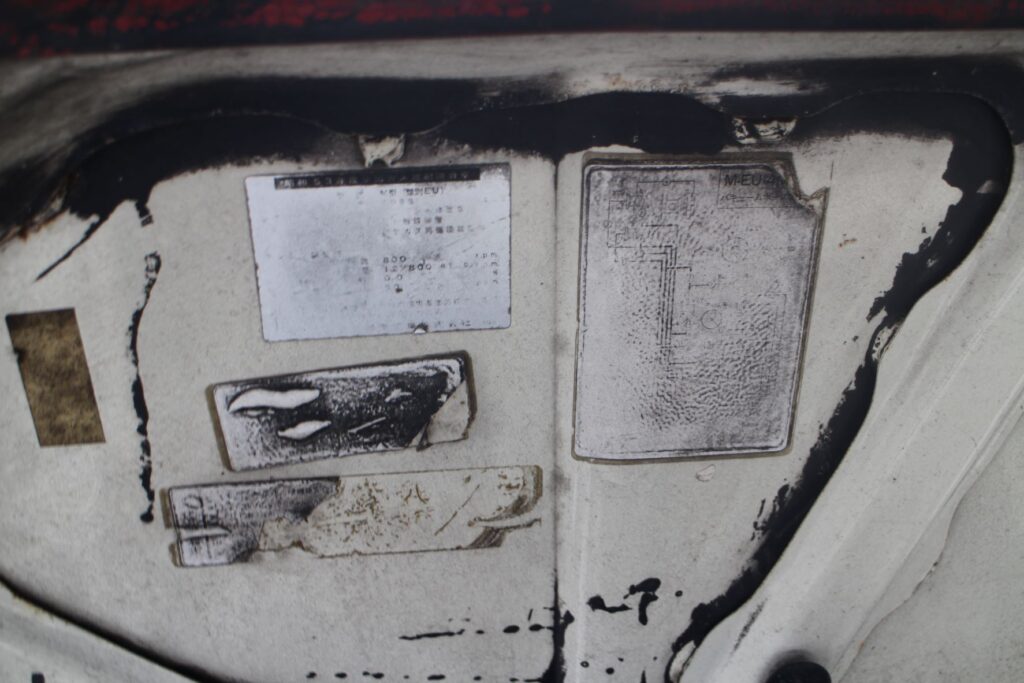 … while other stickers under the hood confirm that this white Toyota 3-door grand tourer is a real JDM model.

It became obvious to us that Ed knew what he has and that he was selling it at a loss, considering that he lowered his asking price to P120,000 after spending around P165,000 before he realized that he didn’t have the time to continue with this project car. Even if we refer to the $6,000 (P300,000) valuation offered by the hotcars.com article for a “rough but restorable” A40/A50 like this one, and deduct 50% off for the non-original 12R engine and 5-speed manual transmission, this Celica XX Supra should fetch no less than $3,000 or P150,000. We concluded that we won’t be able to find another first-year, first-generation Supra at just P120,000, so we pulled the trigger, closed the deal, and promised Ed that we’ll get the car during the week. (Uh… wait! Isn’t it the week of Christmas already?) 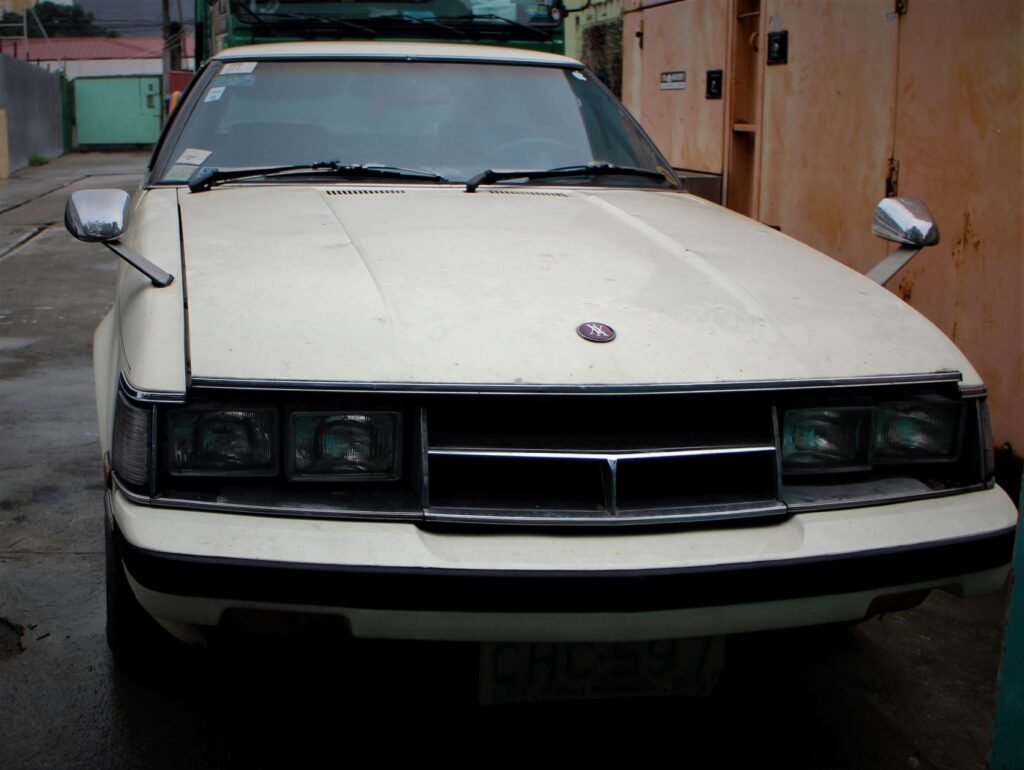 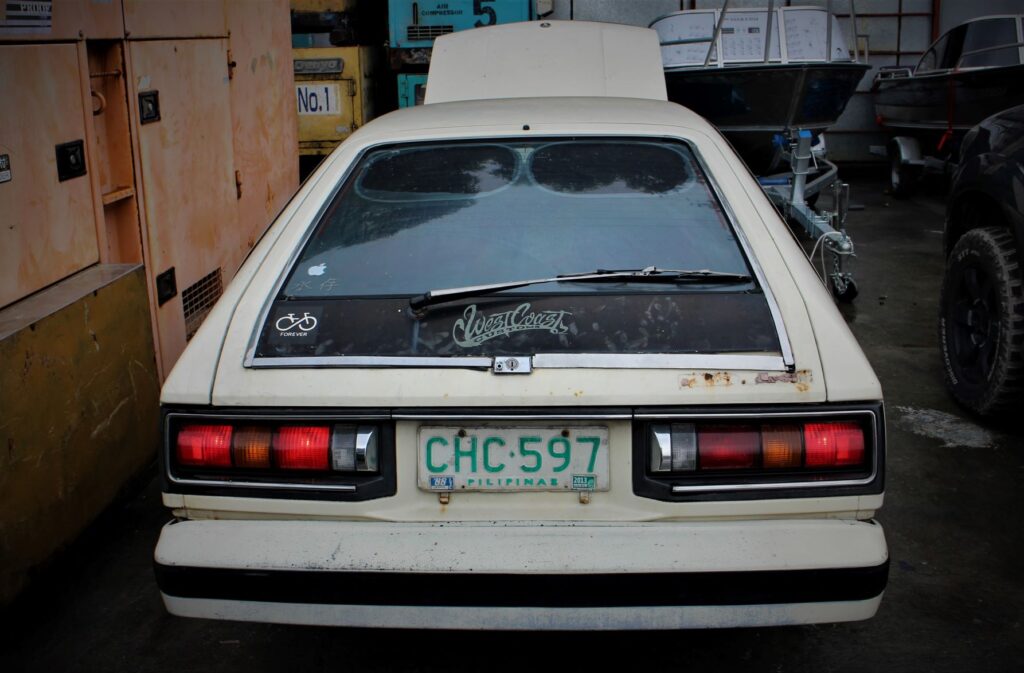 For a 43-year-old Toyota, the body of this A45 is still straight with some dings and minimal body rot. The plastic bumpers will need some massaging to properly align with the body. 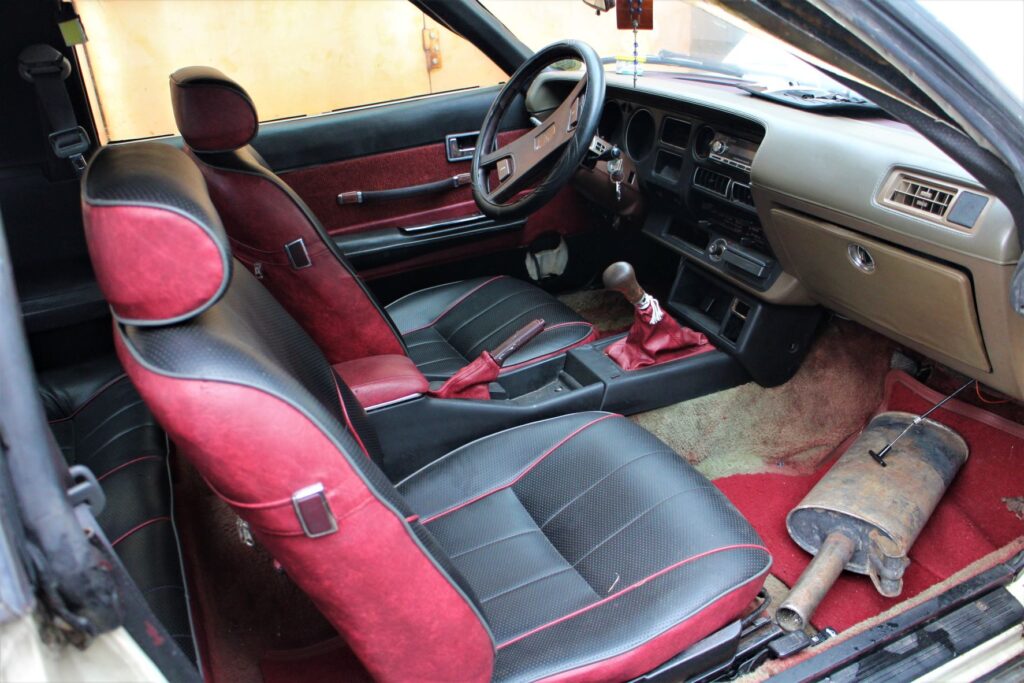 The car comes with newly upholstered seats and sidings in red/black combo that diverts from the original tan/brown interior. Ed will include the original muffler for the old 6-cylinder engine. 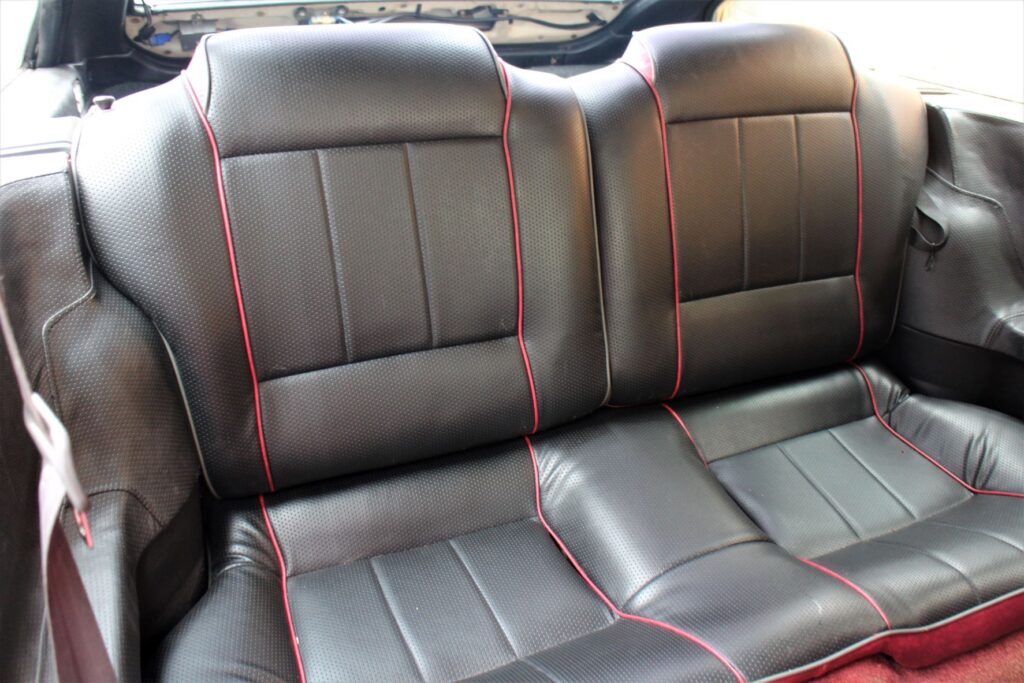 The perforated leatherette seats with red piping continues to the folding rear seats.

As expected, everybody got tied up with Christmas parties and Yuletide cheer the whole week from Monday, the 20th, onward to Christmas Day, which fell on a Saturday. We only worked on getting the car on the following Tuesday, the 28th, with a lot of help from our good friends – Rodger Yu, Johnson Tan, and Eric of Auto Transporter. After we transferred the payment to Ed’s account, we drove the Celica XX Supra onto the Auto Transporter flat bed truck, and took it from Ed’s office in Parañaque to the JSK Custom Paint and Auto Works shop in Marulas, Valenzuela City, where we will further inspect it before we decide on how to go about its restoration. 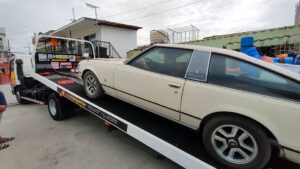 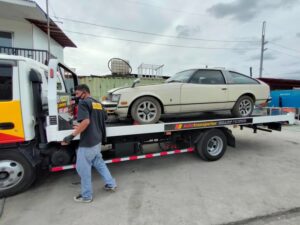 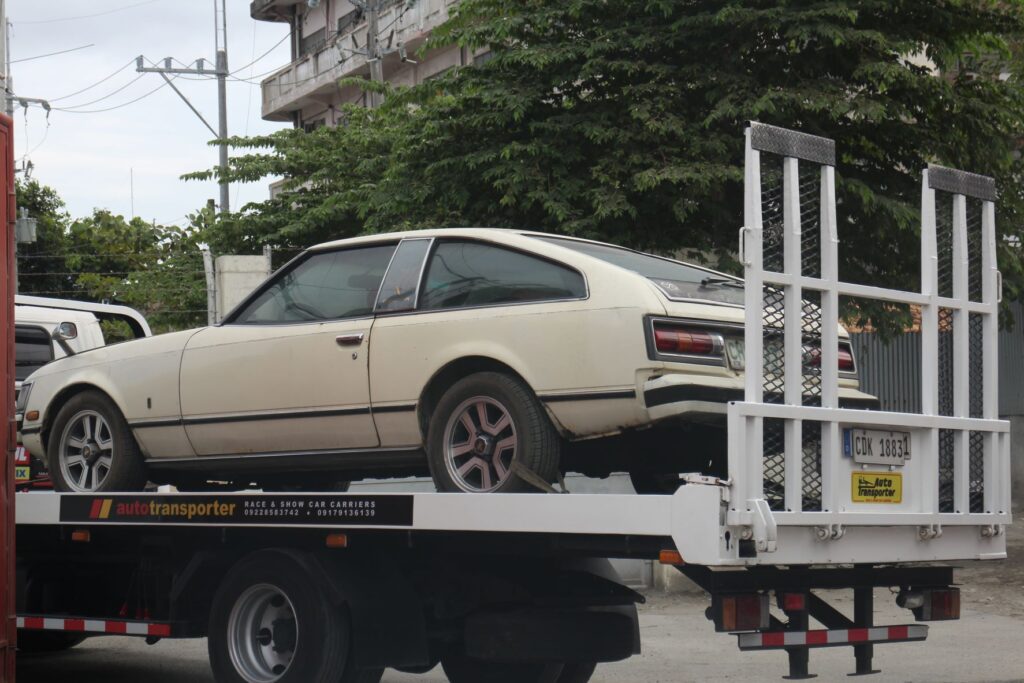 … before he drove off from Parañaque to the JSK Custom Paint and Auto Works shop in Marulas,  Valenzuela City.

Log on next time as we go on a more thorough inspection of our latest Power Wheels Magazine Project Car – our 1978 Toyota Celica XX Supra. (Ooh… that feels so nice to say… ours… yes!) 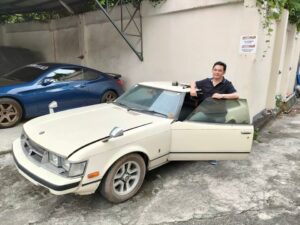