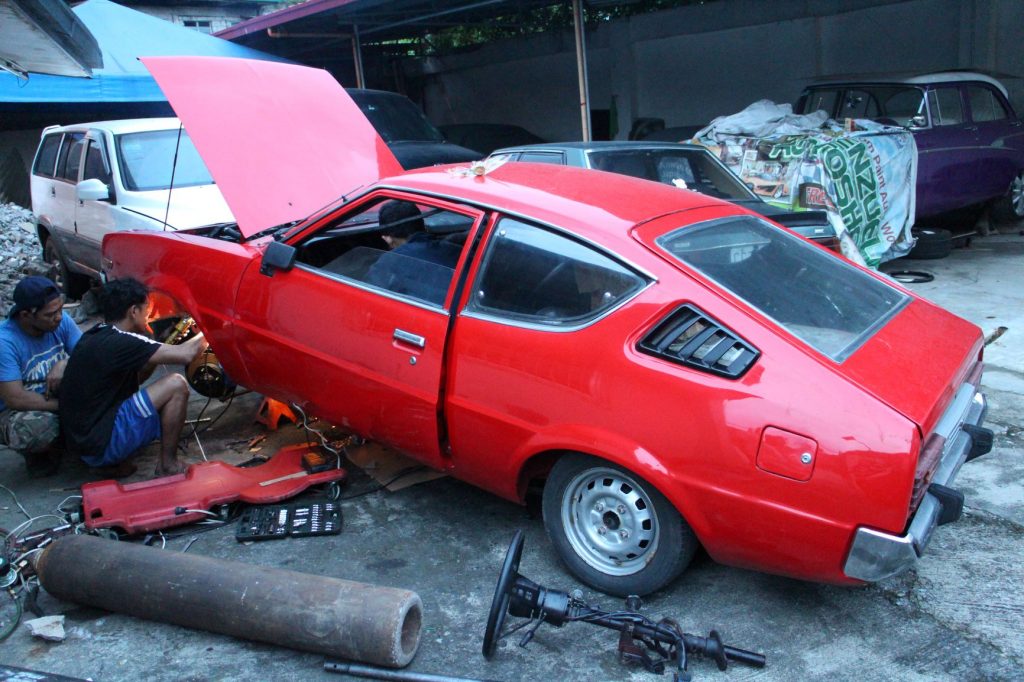 If you’re following these stories in our Power Wheels Magazine Project Car series, we chronicled the replacement of the 4-speed manual transmission of our 1976 Mitsubishi Celeste 1600ST with a 3-speed automatic (A/T) and the addition of a hydraulic power steering system (P/S) in our previous post. Our readers submitted several comments on our Power Wheels Facebook page offering suggestions and asking questions about our mechanical modifications. Please allow us to recap: If you haven’t followed the story and tuned in just now, we are restoring this red Celeste as a surprise birthday gift for ROPALI Chairman Roberto “Bob” P. Alingog from his son, Aldous Rex Alingog, who asked for our help in the restoration after he saw our finished yellow 1977 Celeste project car displayed at the 2018 Manila International Auto Show (MIAS). 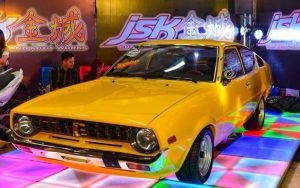 Our Ferrari Fly Yellow 1977 Celeste displayed at the JSK stand during the 2018 MIAS.

Aldous sent us a photo of his dad’s Bone Red Celeste, which Bob bought brand-new back in 1976 to try and impress his lady love, Emelyn Ambatali, who would eventually become his wife. The red Celeste became the Alingog family car and Aldous narrated adventures, fond memories, and unforgettable stories with the car. As a thoughtful and loving son, Aldous wanted to give his father those wonderful memories back by restoring their Celeste as close to original as possible. Unfortunately, their old family car was left in a general state of disrepair and advanced deterioration after several years of neglect but Aldous was determined to have it restored in time for his father’s birthday on May 12, 2019, which gave us less than a year to work on it.

Because of our very tight timeframe, Aldous decided that getting a nice donor car would be a more expedient alternative than having their rotted old Celeste undergo a full restoration process. Aldous also reported that their old family car was found to have a severely rusted frame that could break it in half and become a death trap when driven on the road. In mid-July 2018, we found and bought a red 1978 Celeste that we planned to use as the donor car. Since we thought that it was in good condition, we hoped that we could just debug the car, fix whatever needs to be repaired, wax the paint and polish the chrome, replace its Vehicle Identification Number (VIN) plate with the VIN plate from Bob’s ’76 Celeste, file a Change Engine declaration with the Land Transportation Office (LTO), and have the registration renewed as BAF-734, the original license plate of Bob’s car. 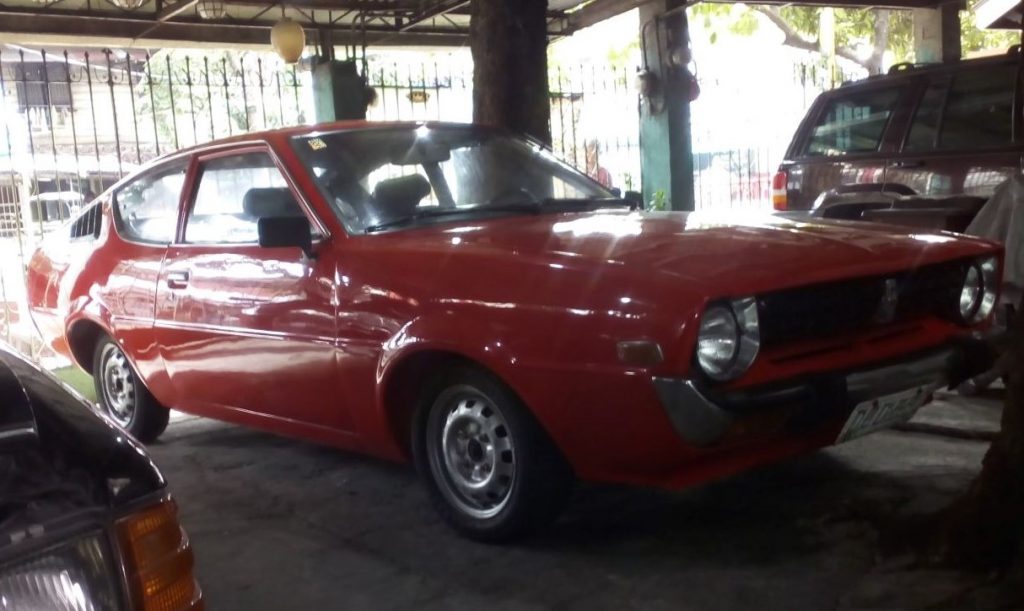 We were planning to have the original 5-spoke PAWI aluminum wheels from Bob’s ’76 Celeste shipped from Cauayan, Isabela to Manila so we can have them refurbished and fitted with Bridgestone Ecopia tires measuring 175/70R13 in front and 185/70R13 at the back, and then have these mounted on our ’78 Celeste donor car. However, Aldous threw a monkey wrench in our plans when he requested that we fit an automatic transmission and power steering so that the Celeste would be easier to drive and enjoyed by his dad, Bob, who’s in his late ’60s. We initially tried to source and find just the A/T and P/S parts but we got lucky when we found a 1982 Lancer SL that had all the parts we needed for the conversion. By September 2018, the A/T and P/S from the ’82 Lancer were being installed into the ’78 Celeste donor car and we thought that our work was going to be easy afterwards. Woo, were we wrong! 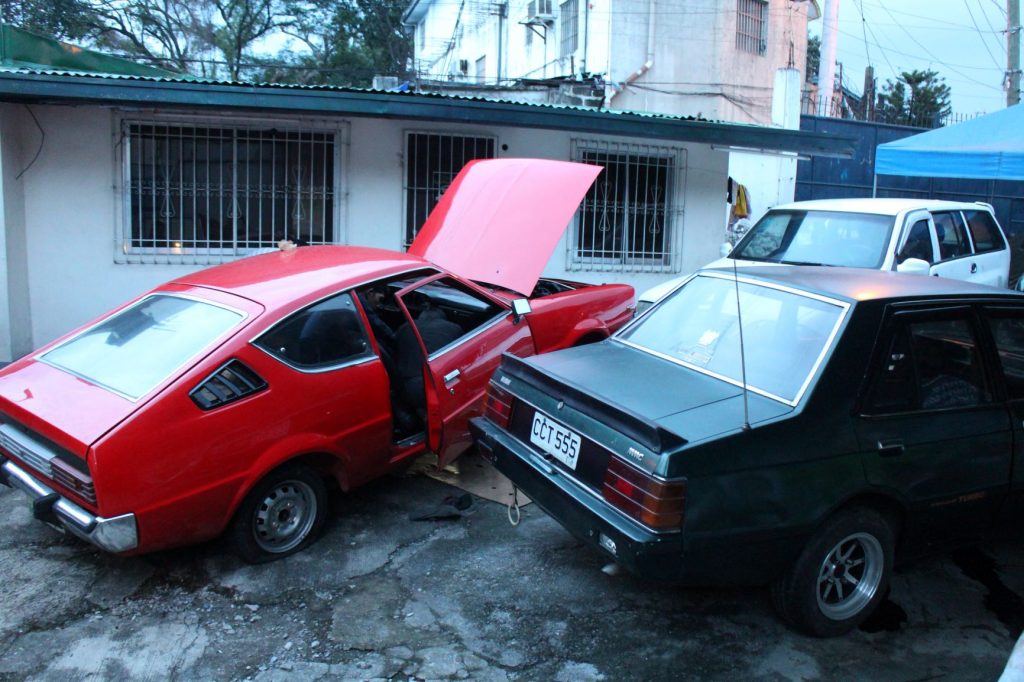 We got the A/T and P/S for our red Celeste from the green box-type Lancer.

While the mechanics from JSK Custom Paint and Auto Works were working on the chassis modifications to mount the power steering box on the Celeste, they inadvertently found that the forward section of the car’s chassis was severely weakened because of rust and the ravages of time. After all, it has been 40 years since this Celeste left the local Mitsubishi factory, which was then called PAMCOR or Philippine Automotive Manufacturing Corporation. Even though it left the assembly plant with factory rustproofing, 40 years of road use, vibration, and exposure to humidity, rain water and flood water allowed rust to penetrate and oxidize the once-robust steel chassis. The mechanics made a temporary brace made from a thick steel plate to mount the steering box and strengthen the frame to keep it from collapsing. 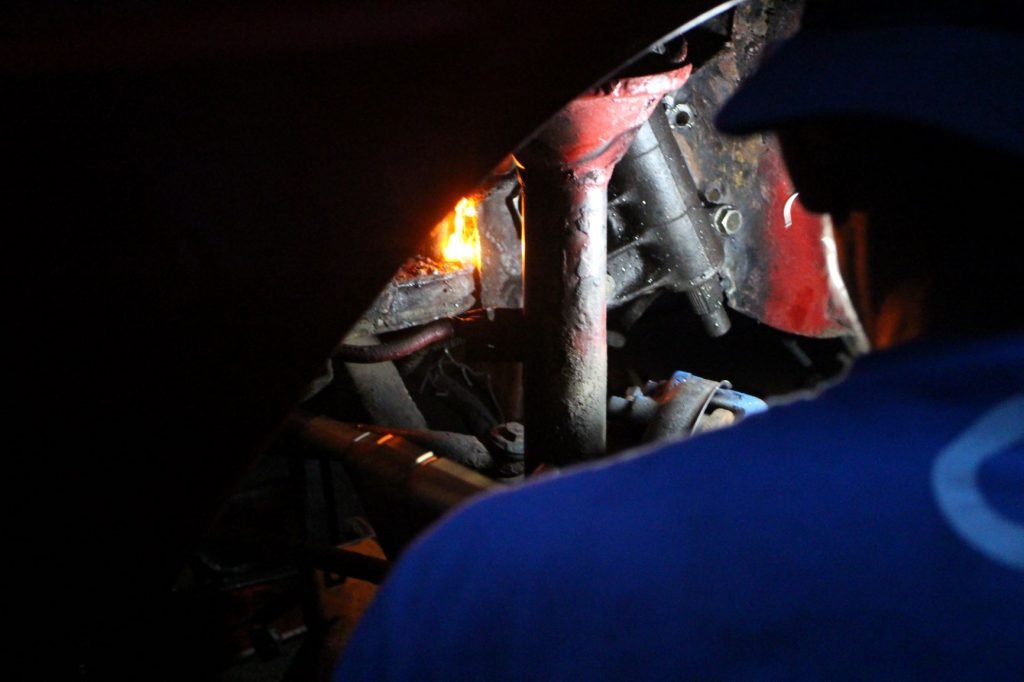 The JSK technicians made a temporary steel brace to mount the power steering mechanism on the weakened frame.

We were disappointed because the rusted frame will delay the project even further. Had we known that the frame of our ’78 Celeste donor car is in almost the same condition as that of our original ’76 Celeste project car, we should have just restored our project car’s steel monocoque body and then completed it with parts from the donor car. We now realized that we fell for that old used car salesman’s trick where the Celeste was polished and the carpets removed so our eyes will be guided towards the shiny paint, clean engine bay, and rust-free floor, and away from other problems and issues. We took the seller’s word that we’ll have no major issues with the Celeste after he supposedly took really good care of it. We have always believed in the importance of trust and palabra de honor (word of honor) but we began to suspect that the rotted frame is only the start of our problems. 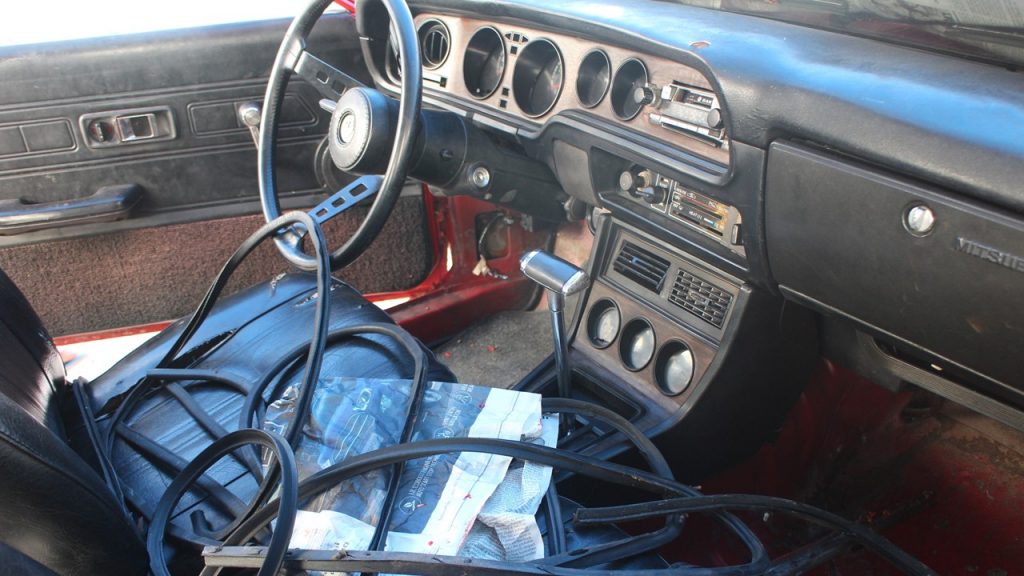 At least, we got the A/T and P/S conversion done before we found the other rust issues.

Between October and November 2018, there was very little work done on our red project car. Aldous went abroad on business while Johnson Tan, the proprietor of JSK, became busy with organizing the 8th year of the JSK Auto Fun Run. When we visited the shop in early December 2018, our Spanish heritage suddenly came out bursting with expletives! Because of the rust issues in the frame, Aldous had the paint of the Celeste stripped down to bare metal so we can repair other rusted portions that’ll show up. And coño, puñeta, hijo de p#ta! There were a lot of rust and other problems that popped up! 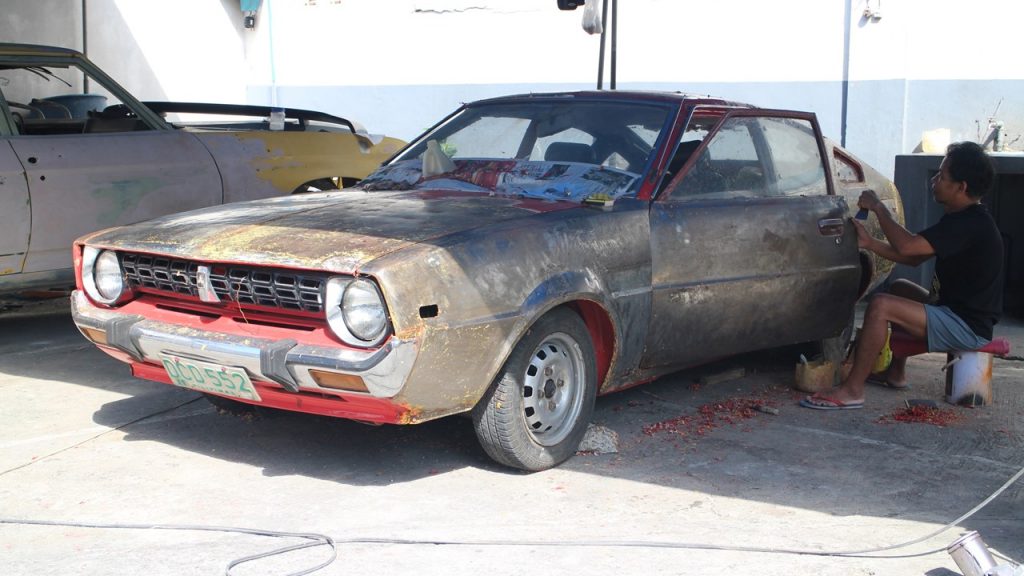 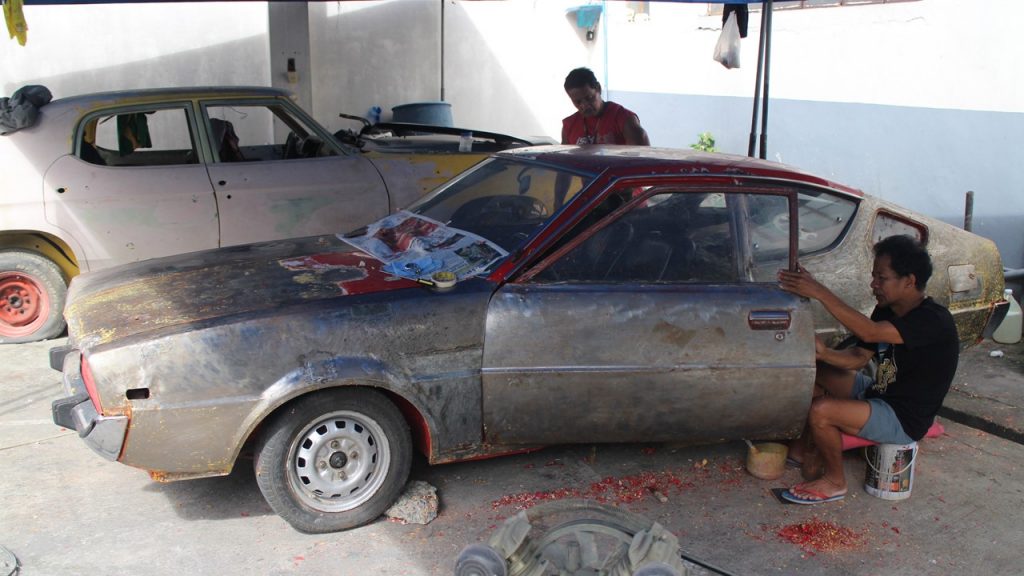 Let’s start from the front with the hood. The JSK technicians found that the hood was covered with a thick layer of body filler (masilya) to hide the holes perforated by rust. We counted more than 15 holes besides the two original factory perforations for mounting the windshield washer nozzles. The technicians also reported that only the leading front edges and left front corner of the hood have been repaired and beaten back to shape while the rust holes were merely covered up with Bondo (the brand name of the body filler) when the Celeste was repainted, suggesting that the paint and bodywork were done quite hastily just to cover the problems in order to sell the car quickly. Que horror! Que barbaridad!

Like those annoying TV infomercials that try to hawk items that you don’t really need, the phrase “But wait, there’s more…” kept ringing in our ear. More rust was being discovered and exposed every time the paint off was being stripped off from the car by the JSK technicians. Here’s what we found on the left side of the Celeste: 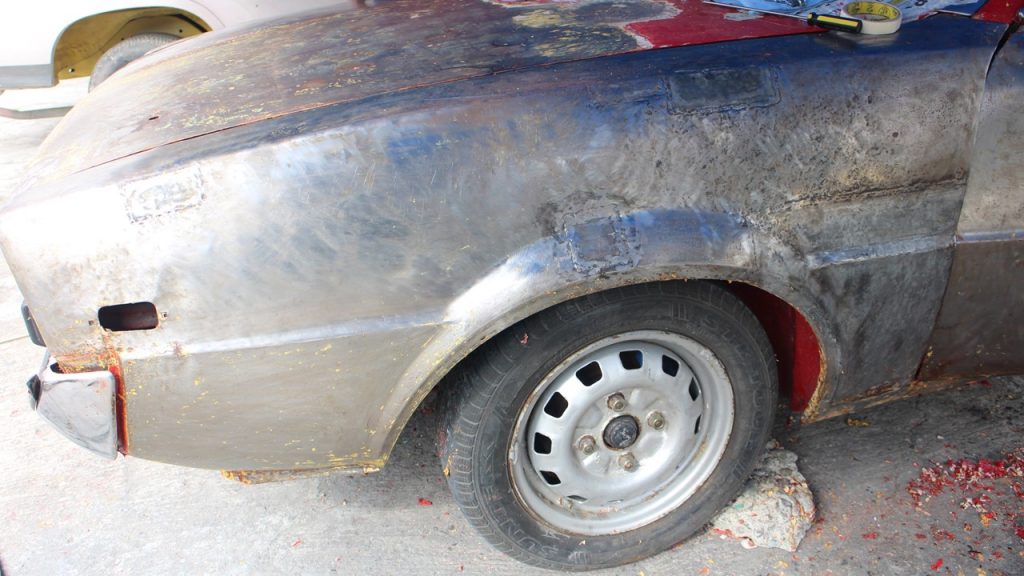 Some parts of the front left fender had been replaced with metal patches but weren’t grinded well enough, requiring a thick layer of body filler to cover it up. 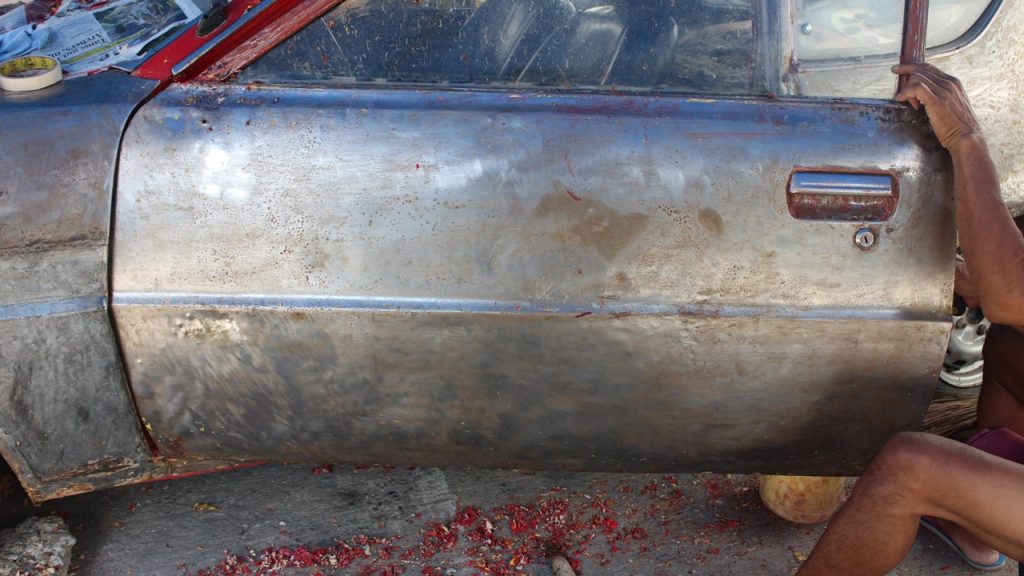 The driver’s door showed some rough panel beating at the lower portion and some rust at the edges but it was relatively solid. 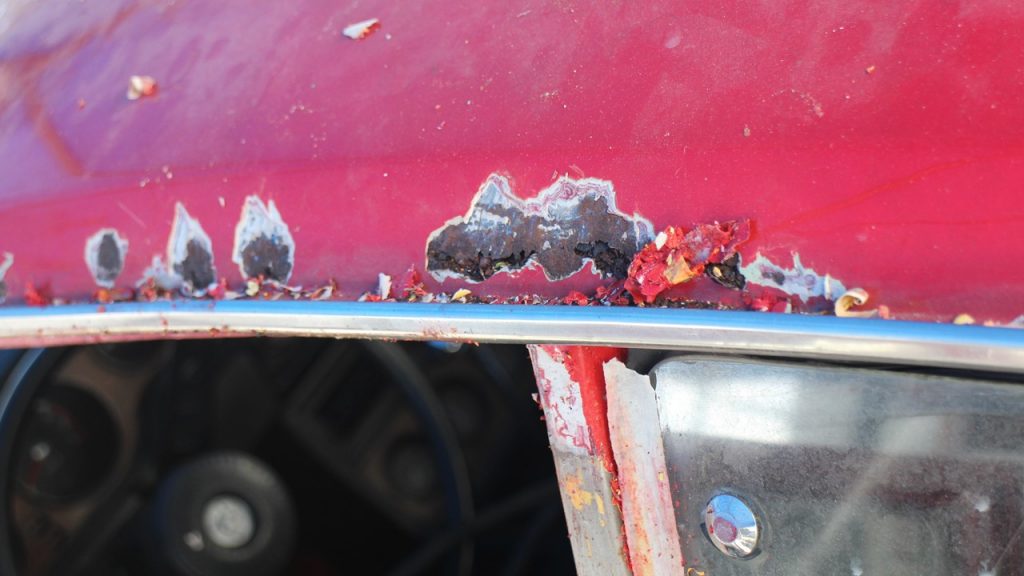 The edges on the left side of the roof revealed deep multiple rust perforations. 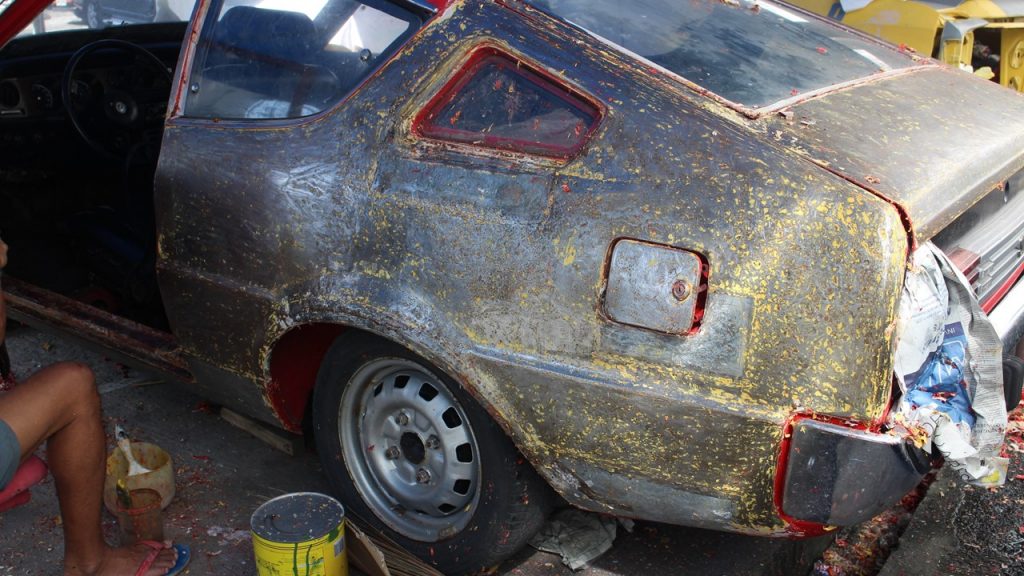 The lower portions of the rear quarter panel and well as the area under the fuel filler door has been repaired in the past and were covered with filler.

We walked around to the other side of the Celeste and what we saw got us a bit worried. All these rusted portions will require a lot of cutting, clearing, measuring, metal fabrication and welding, which will require more time than what our tight schedule could allow. But wait, there’s more… Here’s what we found on the right side of our project car: 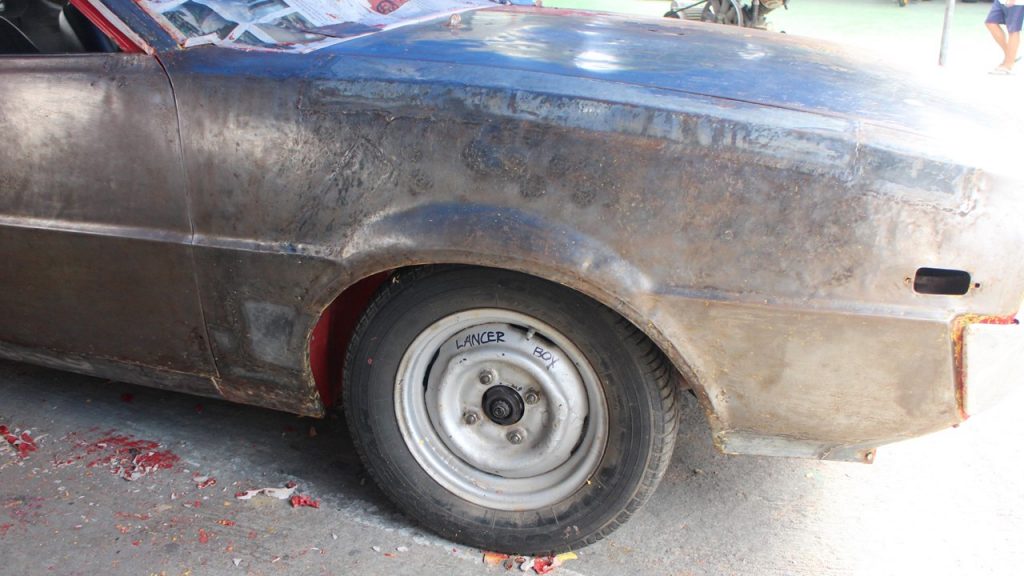 The top and the lower portions of the front right fender were also patched shoddily and covered with Bondo, which explains the waves on the shiny red paint. 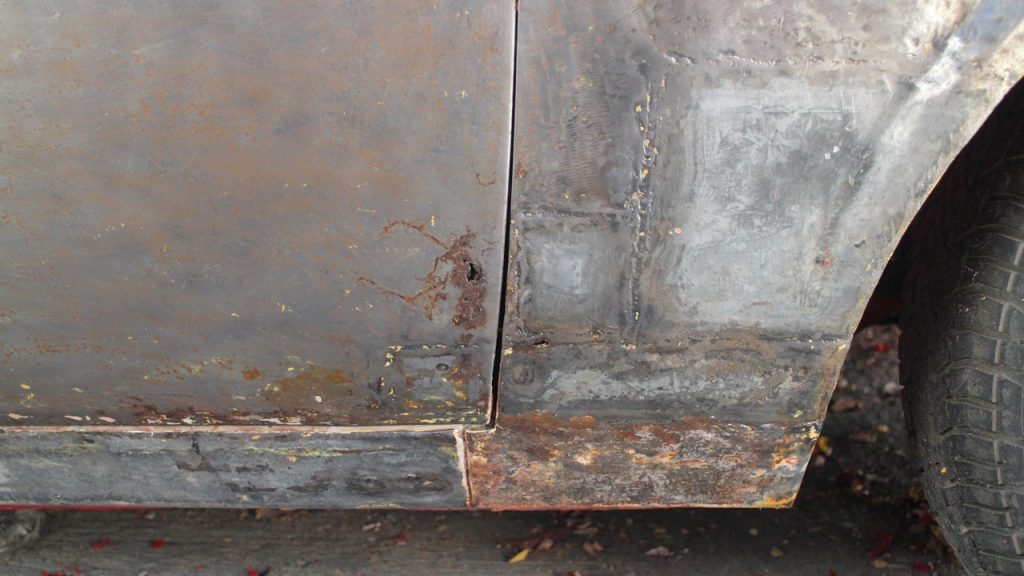 The metalwork on the front right fender and door showed poor workmanship that allowed rust to perforate the metal. 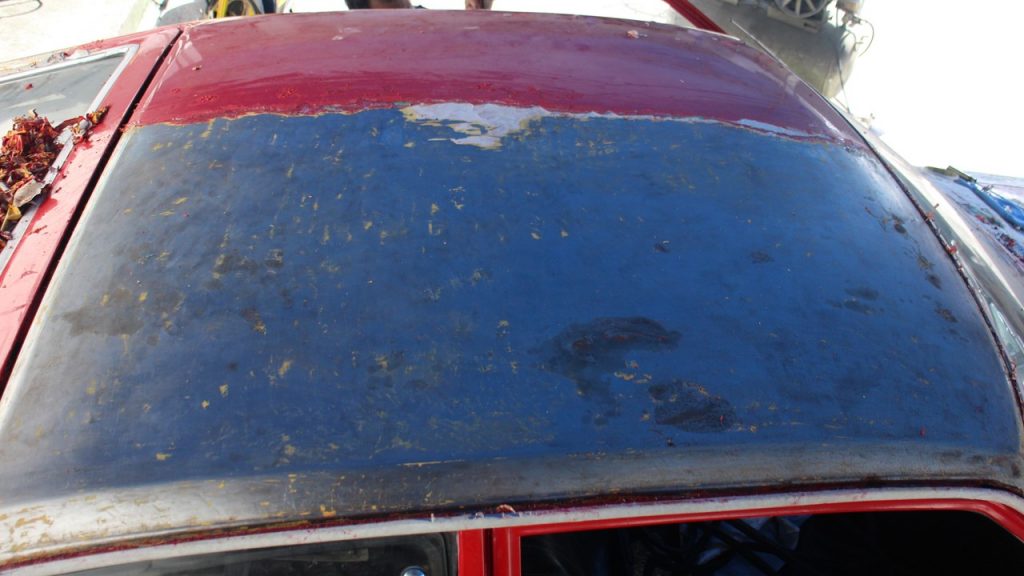 The right side of the roof was relatively clean but still needs some finessing. 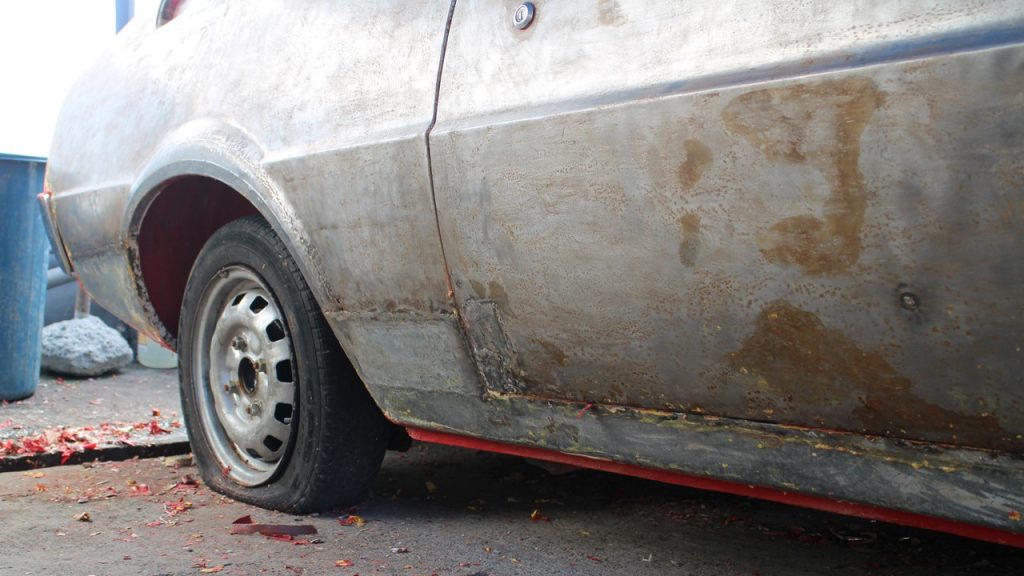 The repairs on the rocker panel and lower portions of the right rear panel will be grinded down to ensure that only a skim of body filler will be needed.

Time is Running Out

We know with the approaching 2018 holiday season, there will be less working days, lots of parties, and a lot of drinking, thus, we cannot expect a lot of work to be done on the car. We’re becoming increasing worried that we won’t make the deadline if we want to complete our project car and give it the show car finish that Aldous wanted. We knew that the Celeste would require more work than what we initially thought it would require. And more work means more time needed, which is time that we do not have! 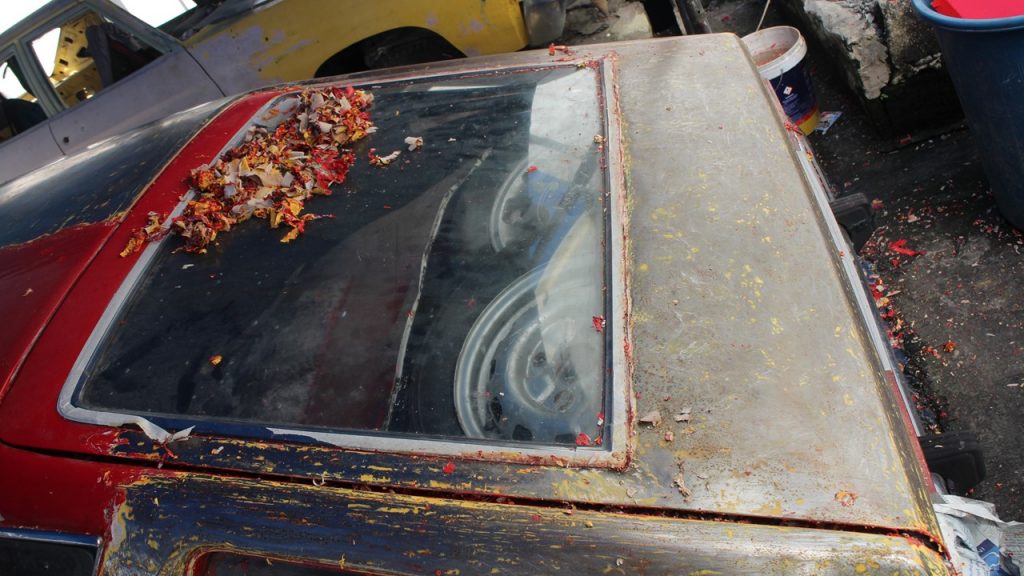 We found some small rust spots in the rear hatch and saw that the gaps with the rear quarter panels are not consistent when the hatch is closed. See all that paint and Bondo being chiseled away! 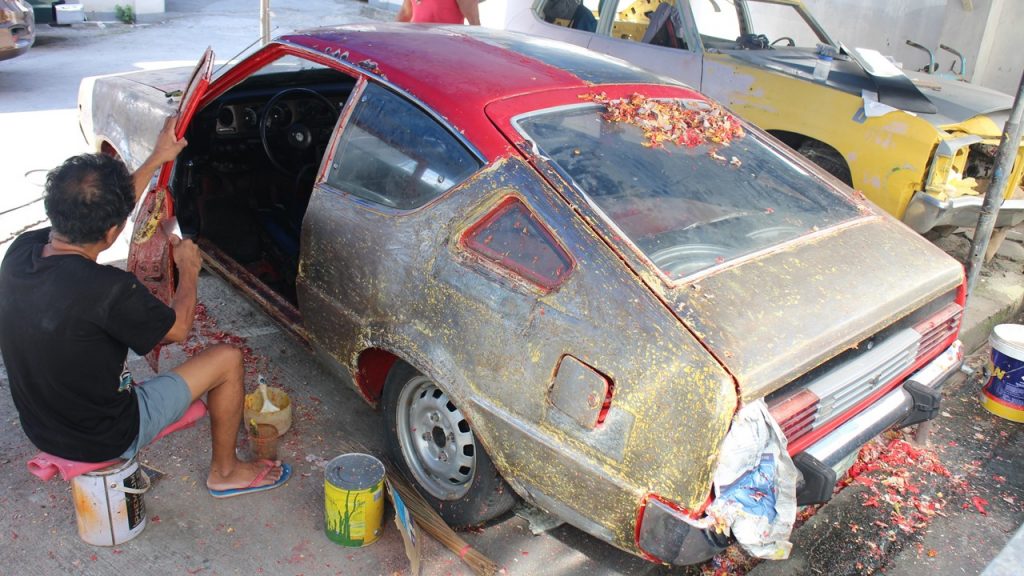 It seems the more paint we peel off, the more problems we discover… Jeez!

We called the previous owner from Sucat, Parañaque who sold us the Celeste donor car just to tell him what we discovered and to express our disappointment with his palabra de honor. As expected, he denied knowing about the rust hidden under the shiny paint and thick body filler, and he claimed that he bought the Celeste in same condition he sold it to us. At least, he was a gentleman and apologized for the inconvenience that we were going through. On hindsight, we can only blame ourselves for falling for that used car salesman’s trick and for rushing into the sale without scouting for other donor cars since we were under a time crunch. Caveat emptor – Let the buyer beware, indeed. 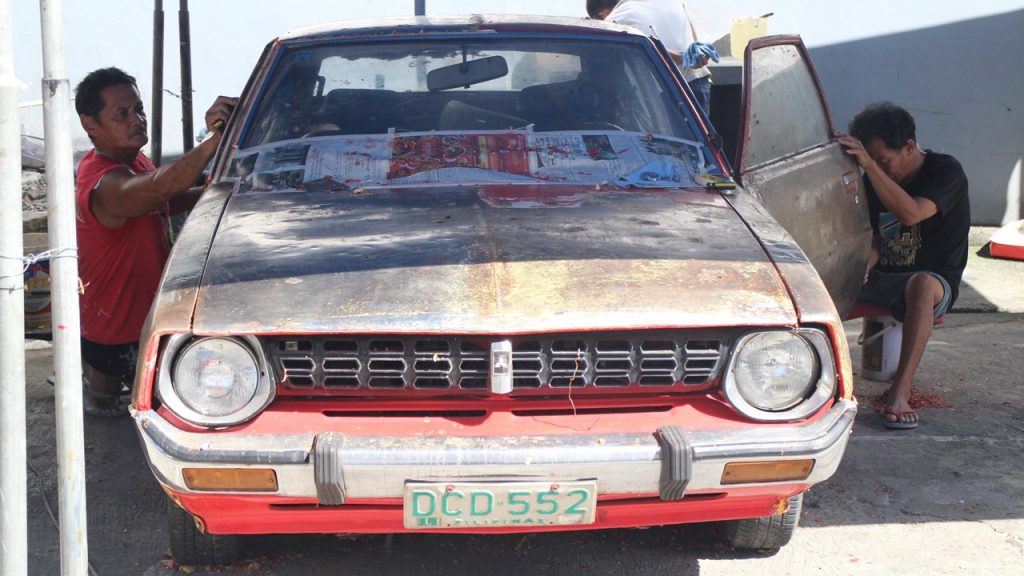 Ah, well… That’s now water under the bridge. Tune in again next time when we continue working on the restoration of this 1976 Mitsubishi Celeste 1600ST where we hope to keep our own palabra de honor and finish it in time for the birthday of the owner, Bob Alingog.